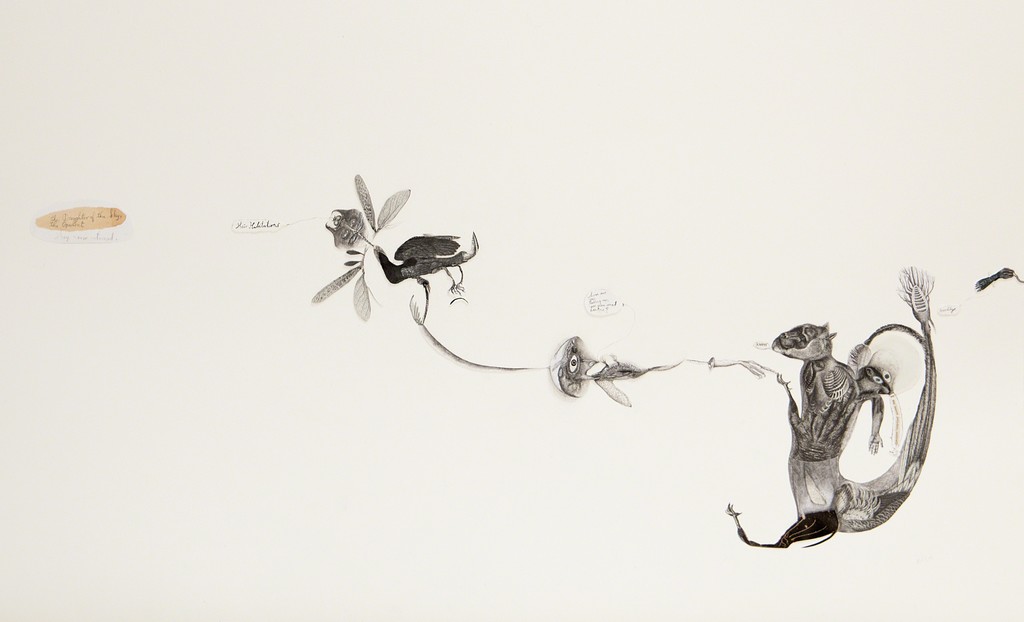 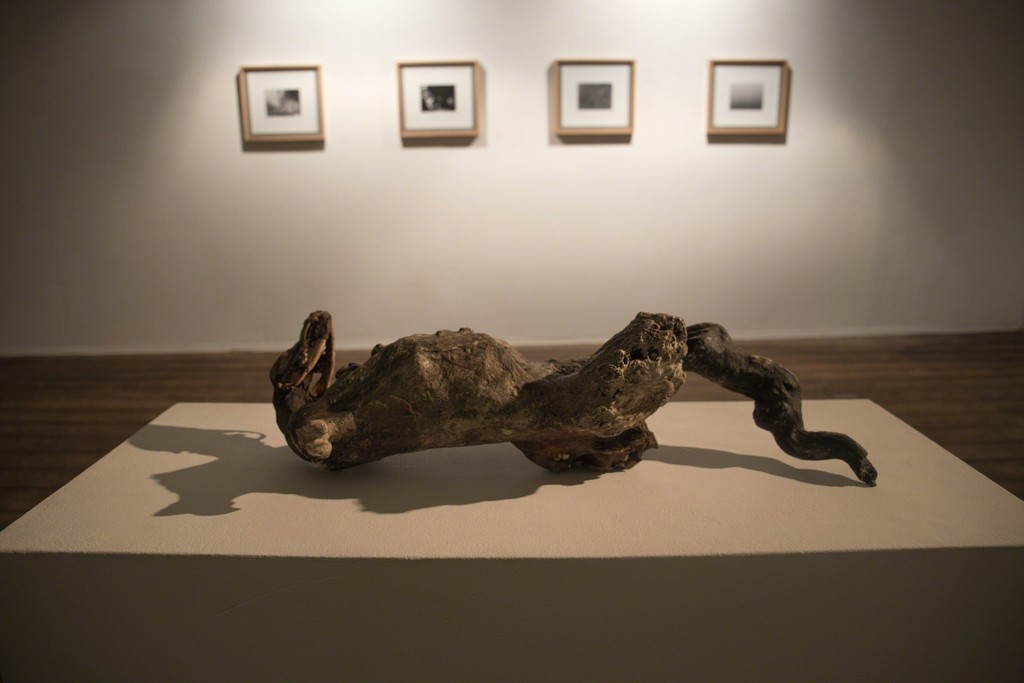 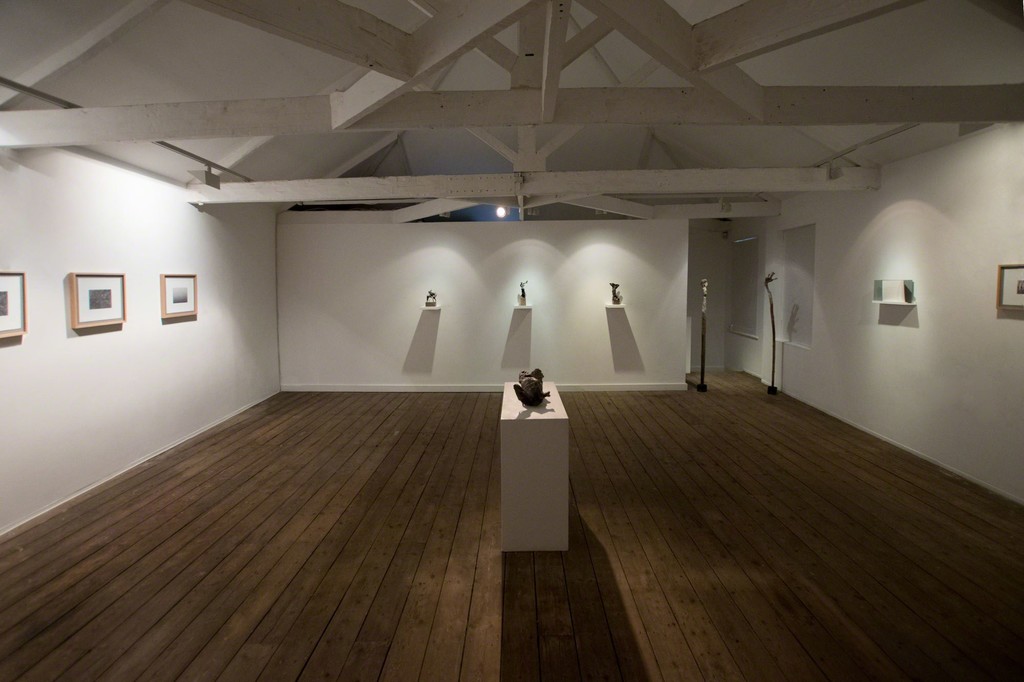 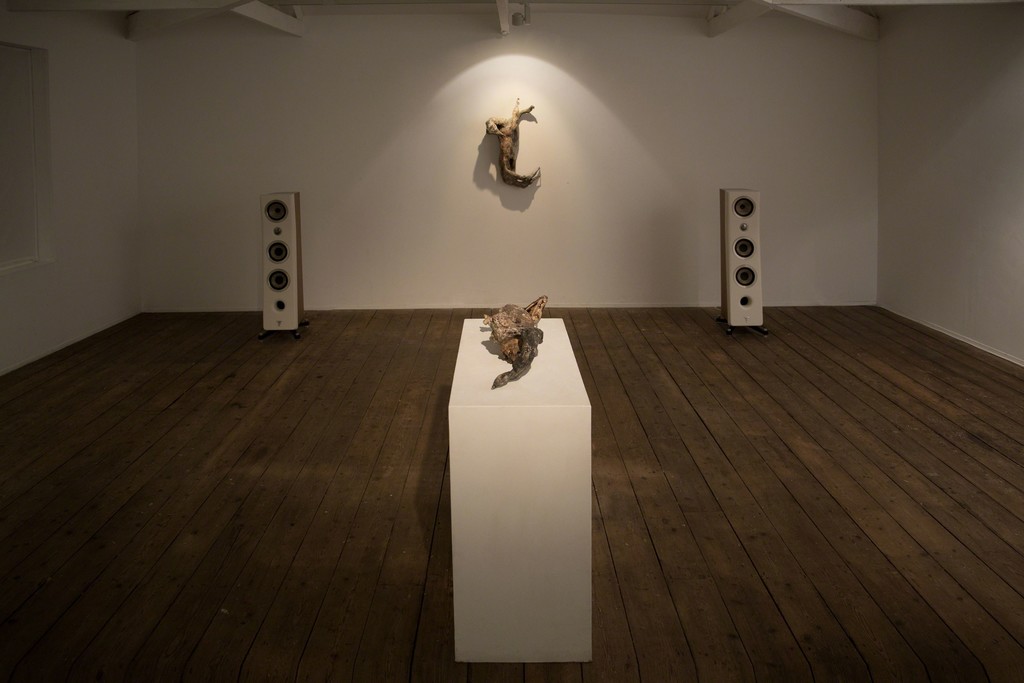 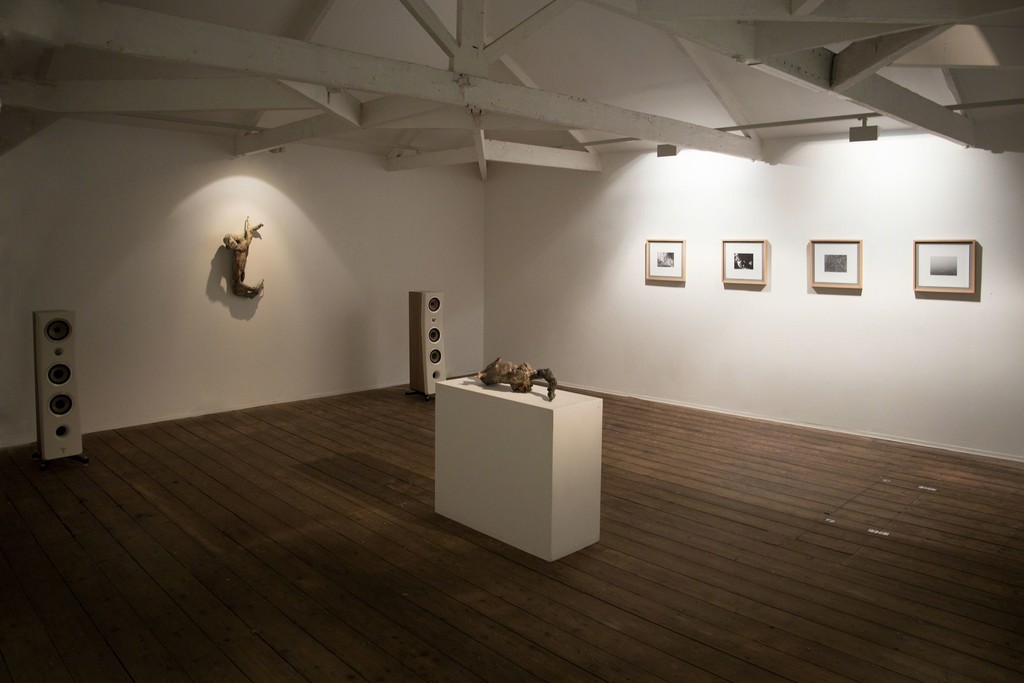 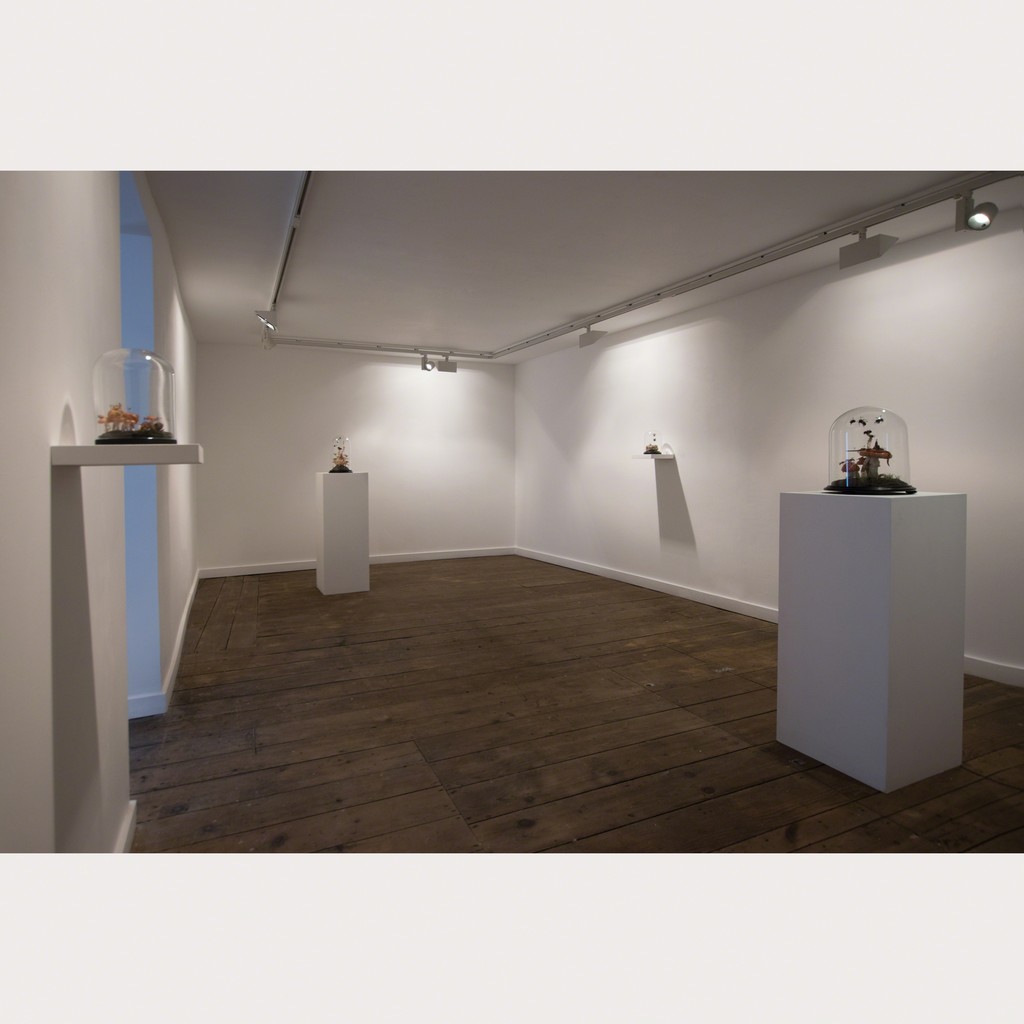 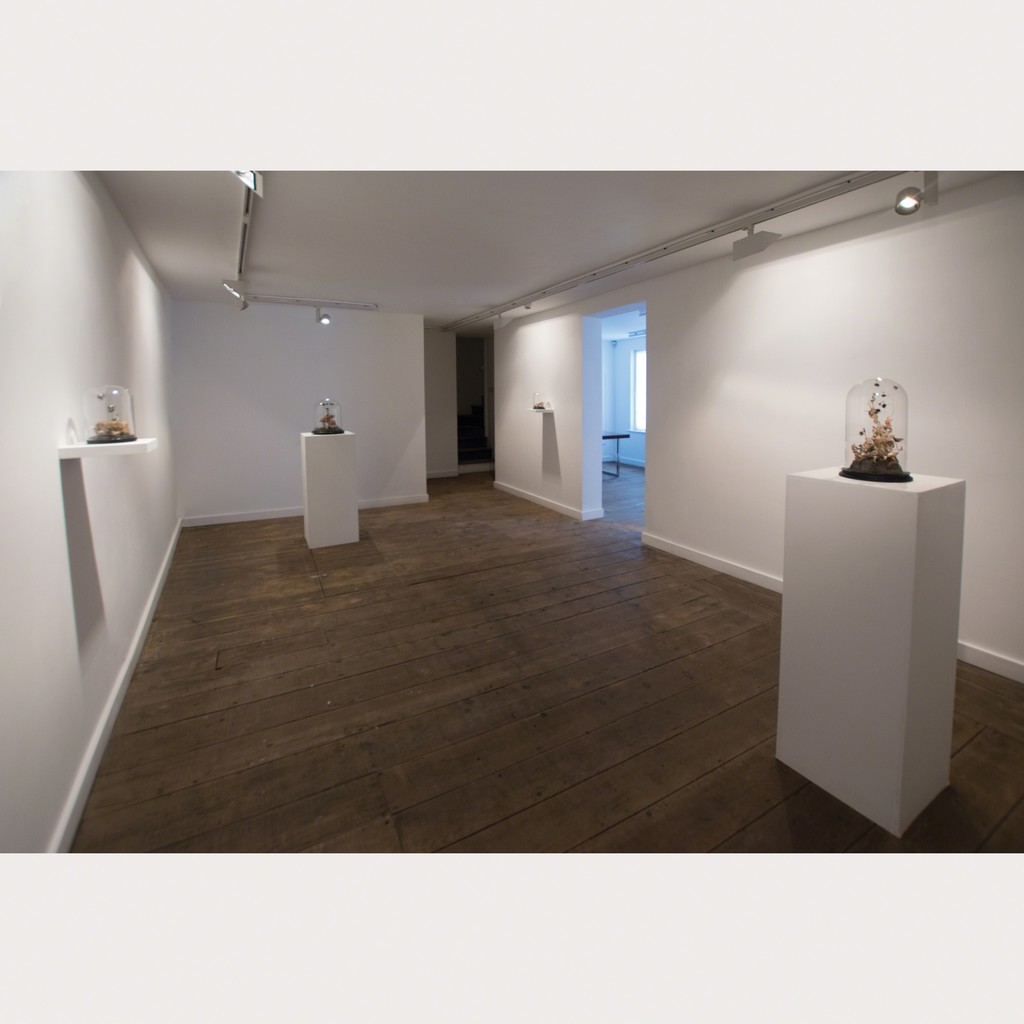 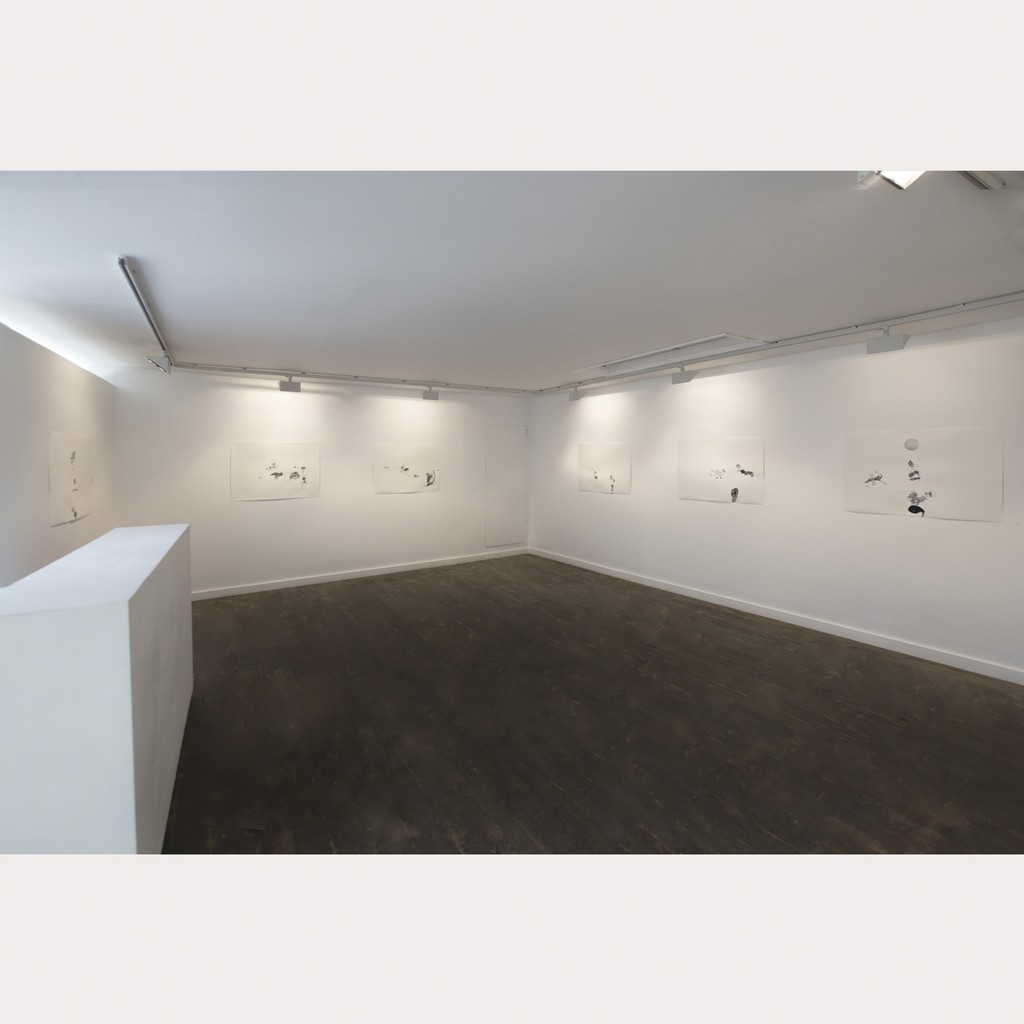 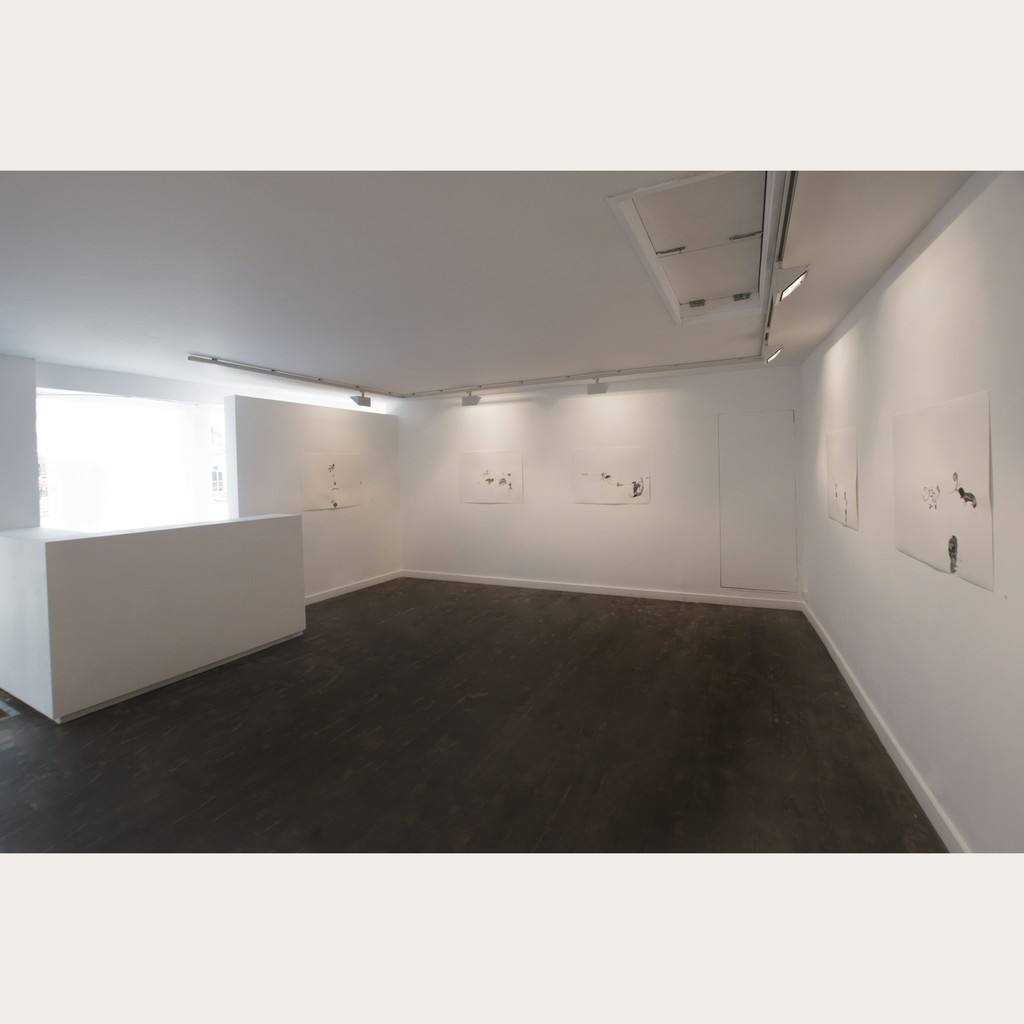 Opening, appropriately and poetically, the day after the longest day (Summer Solstice), Anima-Mundi presents a selection of unique, multimedia, solo projects, from artists who’s work weaves the prosaic with the romantic, elemental, wild and visionary, under the overarching title of ‘Animism’. ‘Animism’ includes the following projects: ’That Luminous Body That Care of The Soul’ by Harriet Bell, a series of ambiguous, exquisite, works on paper seemingly tracing the journey of souls. Also included is 'Out of the Earth’ by Tessa Farmer, where a number of miniature sculptural dioramas depict an allegorical battle ground between fairies and the animal kingdom. Also featured is ‘The Hail Glow’ from Jamie Mills and Jim Carter, an exhibition consisting of sound, sculpture, photography and story creating a multidimensional experience bringing together human and animal, grief and transcendence, the real and the mystical. Finally ‘Small Gods’ a spoken word sound piece sees celebrated mythologist, author and storyteller Dr Martin Shaw discus the potent relevance of myth as the perennial language of the earth.

Dr Martin Shaw will also be following the launch event at Anima-Mundi with the must see ‘An Earth That Thinks in Myth’, a celebration of stories, poetics, philosophies and ideas in the atmospheric Cellar 1, underneath the renowned Porthmeor Studios in St Ives.‘Animism’ provides an exciting access point for esoteric and sacred stories, suggesting that the archaic, visionary or mythic may yet have an important role to play in these most turbulent and often disconnected times. In far reaching West Cornwall, where ancient stories of man, land and sea emanate, ‘Animism’ creates a valued space for reverie and deep reflective thought. More About Each Exhibited Project.

Tessa Farmer ‘Out of the Earth’Tessa Farmer (b. 1978) has created ’Out of the Earth’, which features among a number of sculptural dioramas ‘The Singing Barrow’. This is an imagined glimpse inside a burial mound, one of the Bincombe Bumps, that are believed to be inhabited by fairies. Local folklore has it that you can hear them playing music if you put your ear to the ground at noon. The piece on display intertwines the archaeology and resident wildlife of the burial sites with the underground lair of the fairies. Upon closer inspection strange music can be heard. ‘Out of the Earth’ takes it’s title from a short story by Arthur Machen, the influential nineteenth century author of horror and the supernatural and Tessa Farmer’s Great Grandfather. The story concerns ‘hideous little people of the earth’, ‘horrible little stunted creatures with old men's faces, with bloated faces, with little sunken eyes, with leering eyes. It was worse than uncovering a brood of snakes or a nest of worms.’ They rise from a ditch and wreak murderous havoc in sleepy rural Wales. Tessa Farmer’s fairies, though of slighter stature, are no less fierce. Their underground lair occasionally erupts to reveal glimpses of their nefarious activity. Emerging from their earthy hideout they feast on larvae, worms and other delicacies atop toadstools. They capture butterflies, wasps and hornets, raid nests, race snails and dance to the beat of buzzing bees and snail shell drums. They are plotting, building their army, developing weapons and awaiting curious humans to lure into their realm.

Harriet Bell ‘That Luminous Body That Care of The Soul’‘That Luminous Body That Care of The Soul’ from Harriet Bell (b. 1950) is a collection of intricate, almost forensic, works on large sheets of paper incorporating delicate drawing with collage. These ultra sensitive works record a seemingly dream-like, interconnected journey. Rather like a botanist using specimens for scientific analysis, Bell selectively displays her findings, taking us beyond the realms of prosaic understanding of life and, indeed, what lies beyond. The ever-changing cycle of life.Absence, presence, death and decay, growth and metamorphosis all ‘feel’ pertinent when looking at her visions. Bell’s works are made in private and very rarely seen. There is no specific narrative to the work but Bell often ‘borrows’ words and images from an extensive library of books and often rearranges this stimuli which are then cast like seeds. Her objective is to make work that is completely integrated; each piece is to contain it’s intrinsic, albeit non-explicit meaning within, but emanating that meaning as a presence around it. Harriet Bell is an artist reluctant to furnish her work with artist statements. Feeling that there is a sense that attempting to translate the meaning of the work distracts from the truth that the work itself contains. The only words presented as a statement in her last exhibition catalogue simply stated “We all have to leave”. Leave for where? we ponder... What we feel, feels less final.

Jim Carter / Jamie Mills ‘The Hail Glow’ ‘The Hail Glow’ is a multimedia exhibition by Jamie Mills and Jim Carter concerning relationships between societies perceived outsiders and the wild inhabitants and habitats of the Penwith moorland area of Cornwall. Central to the show’s premise is the publication of a short story by Jim Carter and an audio recording featuring a suite of compositions by Jamie Mills, rendered through acoustic instrumentation, field recordings and processing. The story carries with it a quality akin to that of a traditional fairy tale, complete with the beauty and savagery of the animal kingdom, whilst the music interprets these themes whilst referencing journeys and cycles, loss and redemption.The exhibition includes sculptures from Carter, formed using organic material and animal remnants found in the landscape, alongside a series of monochrome photographs by Mills, which allude to, and reflect, contemporary ritualistic practice within the Neolithic landscape, exploring broader themes and elements within the narrative. ‘The Hail Glow’ is a multidimensional experience bringing together interconnected grief and transcendence, the real and the visionary.

Dr Martin Shaw ‘Small Gods’ & ‘An Earth That Thinks in Myth’ To coincide with the exhibition of his 'spoken word’ essay 'Small Gods’, the celebrated mythologist, author and storyteller Dr Martin Shaw will join us for ‘An Earth That Thinks in Myth’ an evening of stories, poetics, philosophies and ideas to coincide with the opening of the ‘Animism’ exhibition. In this specially organised event, held in the atmospheric Cellar 1 underneath Porthmeor Studios in St. Ives, Dr Martin Shaw will be telling stories and exploring wild ideas about how myth used to be a kind of story that spoke-across-species. That myth itself can be a place where we witness not just narratives about the earth, but moments where the earth itself speaks through the stories. With inspirations ranging as far as Gaston Bachelard to Islamic Cosmology to the work of Joseph Beuys, expect electrifying storytelling and thought-stimulating ideas.Dr. Martin Shaw’s first book, ‘A Branch From The Lightning Tree’ was awarded the Nautilus prize for non-fiction, and was followed by ‘Snowy Tower’ and ‘Scatterlings’ to complete a trilogy of works on mythology, landscape and the nature of soul. An international teacher, he has designed and lead both the ‘Oral Tradition’ and ‘Mythic Life’ courses at Stanford University, and, as a fellow of Schumacher College in Devon, co-created their MA in Myth and Ecology (with Dr. Carla Stang). His school of independent scholars in mythopoetic’s and wilderness studies is just entering its fourteenth year. Recent collaborations have includedMark Rylance, Coleman Barks and David Abram. He is a paintingscholar from The British School in Rome, and his translations of Gaelic and Welsh folklore (with Tony Hoagland) have been published in The Mississippi Review, Poetry International, Kenyon Review, Orion, and Poetry Magazine.2018 will see the release of his new book, ‘Courting the Dawn: Poems of Lorca’ (with Stephan Harding), with several more in completion: all involving a revisioning of the word romanticism in the early twenty first century.