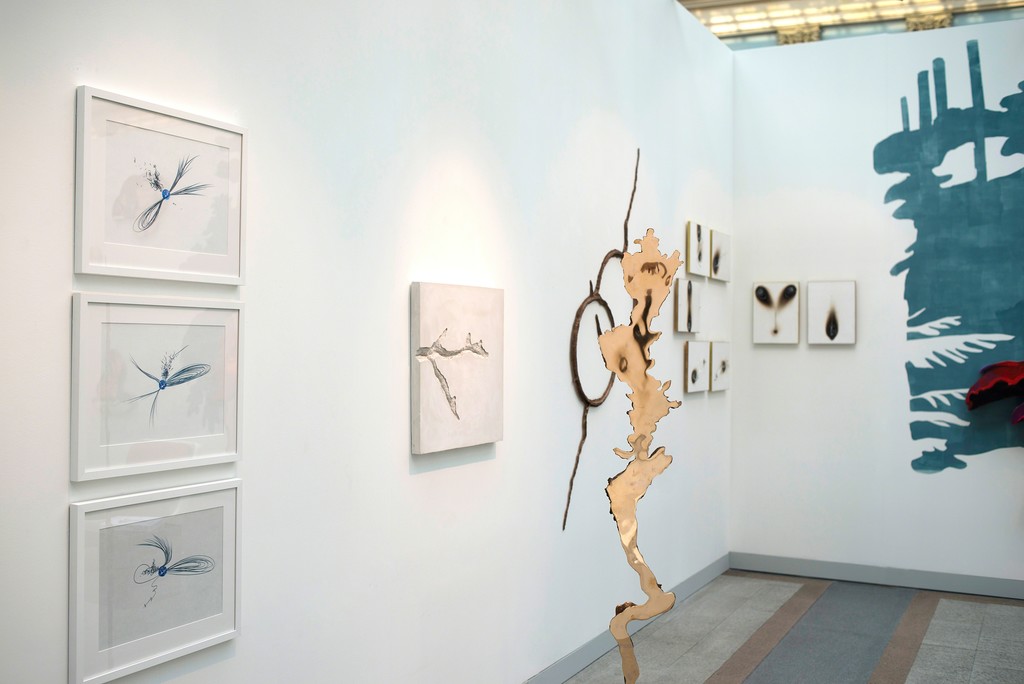 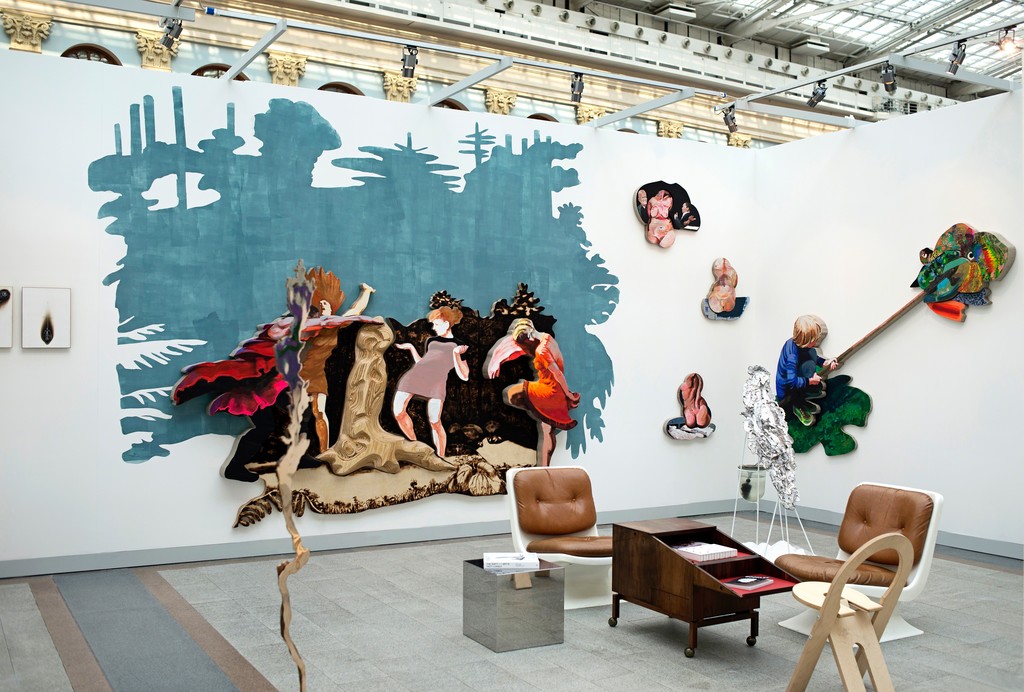 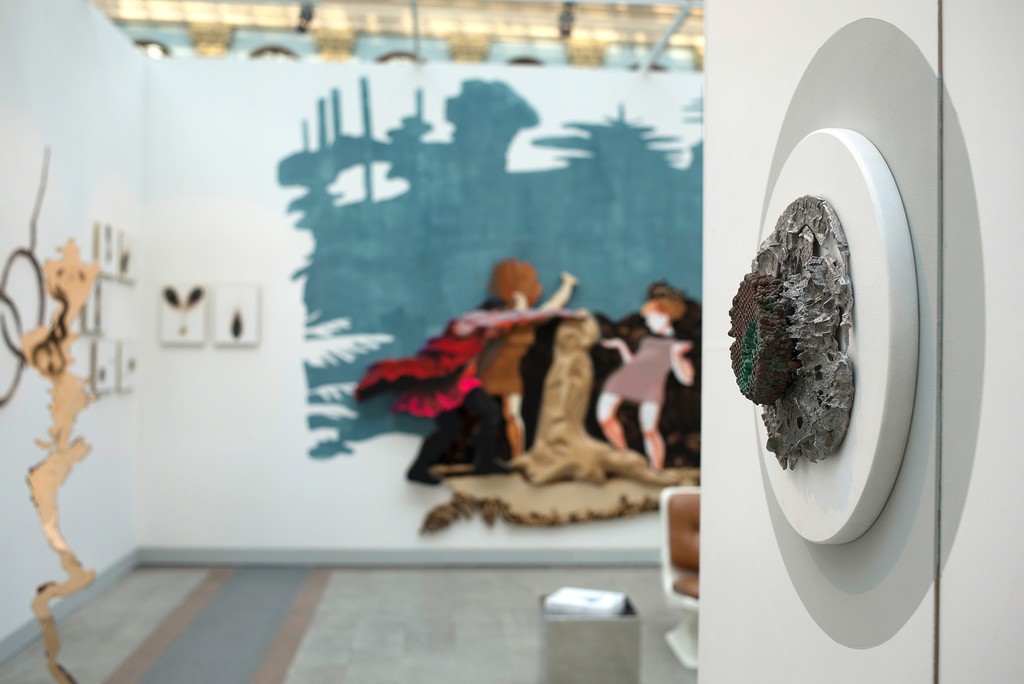 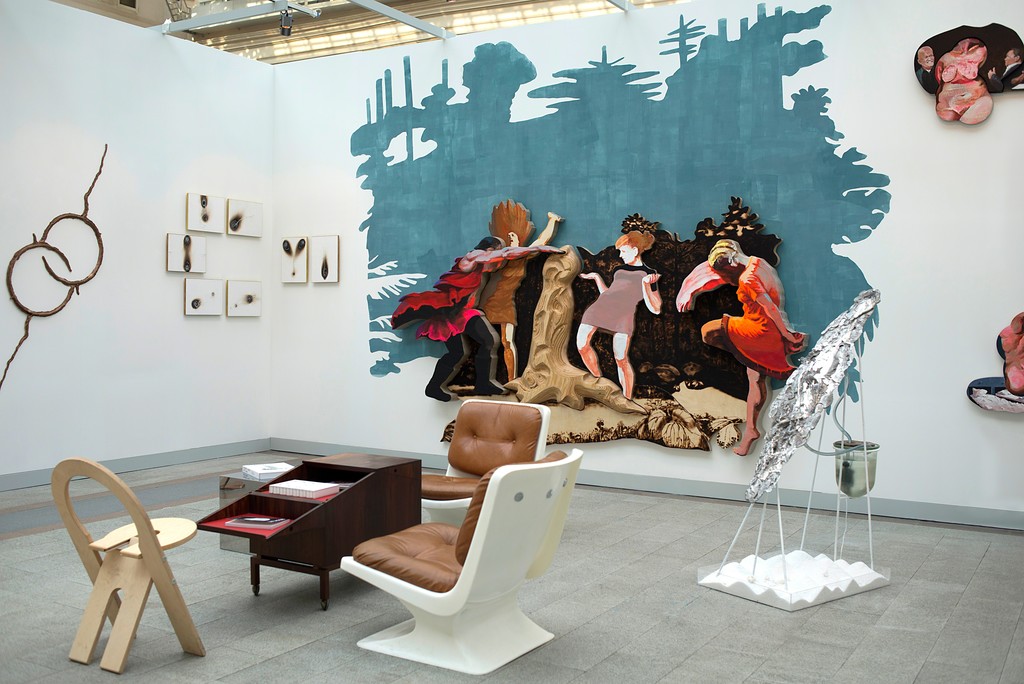 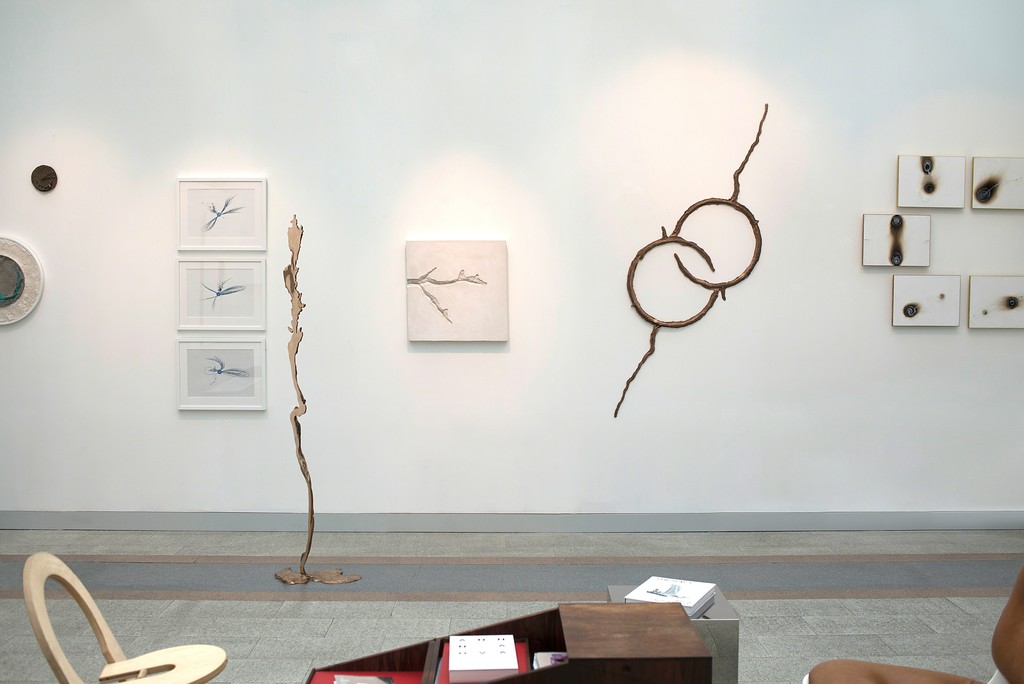 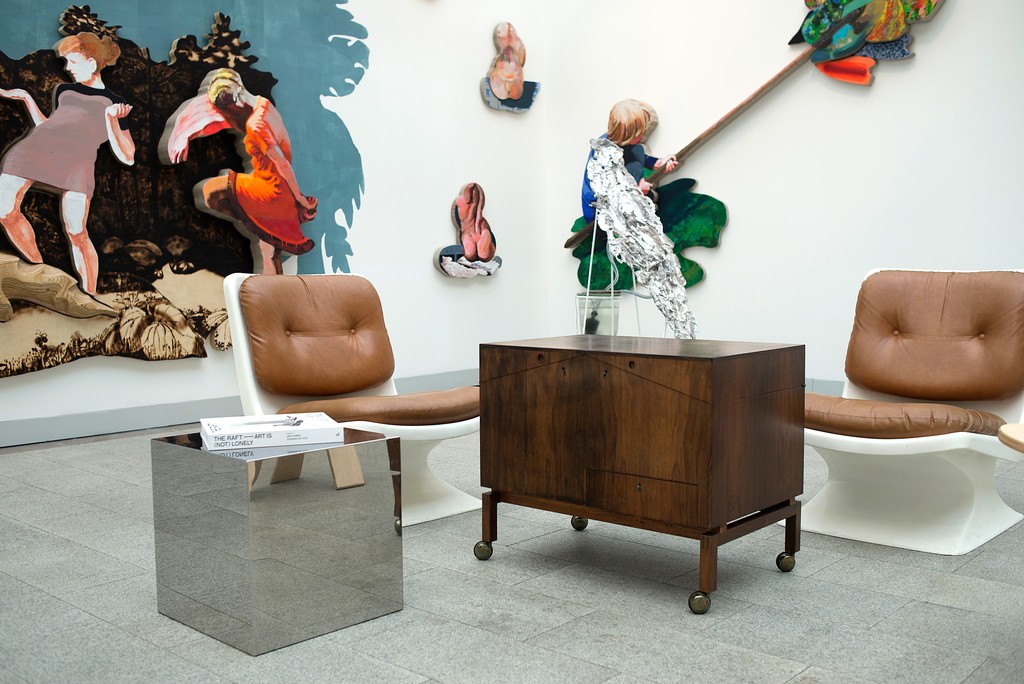 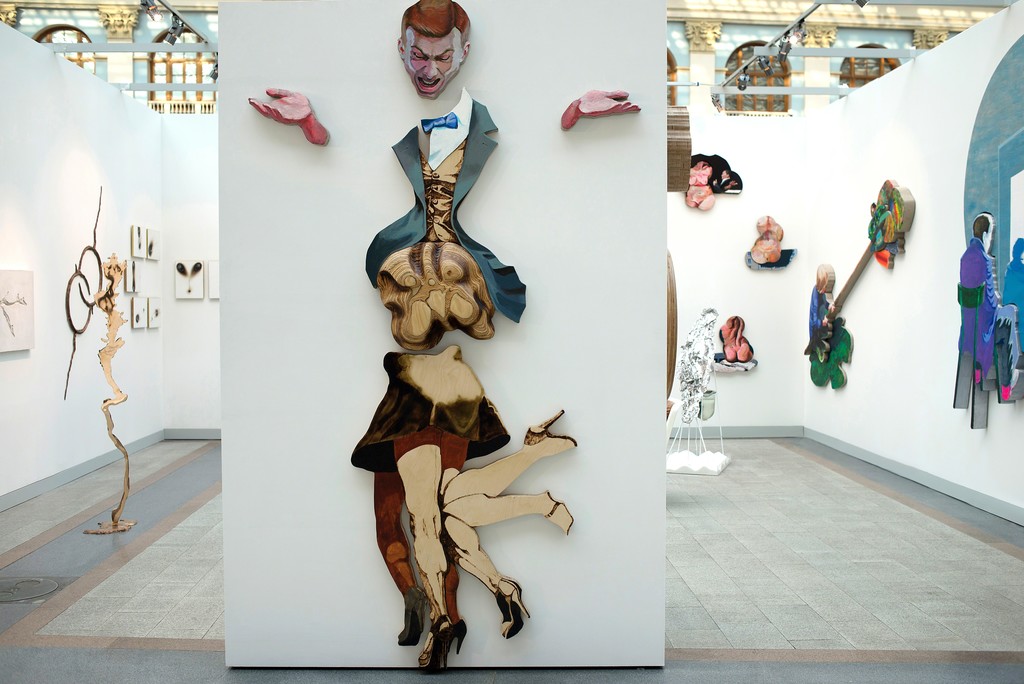 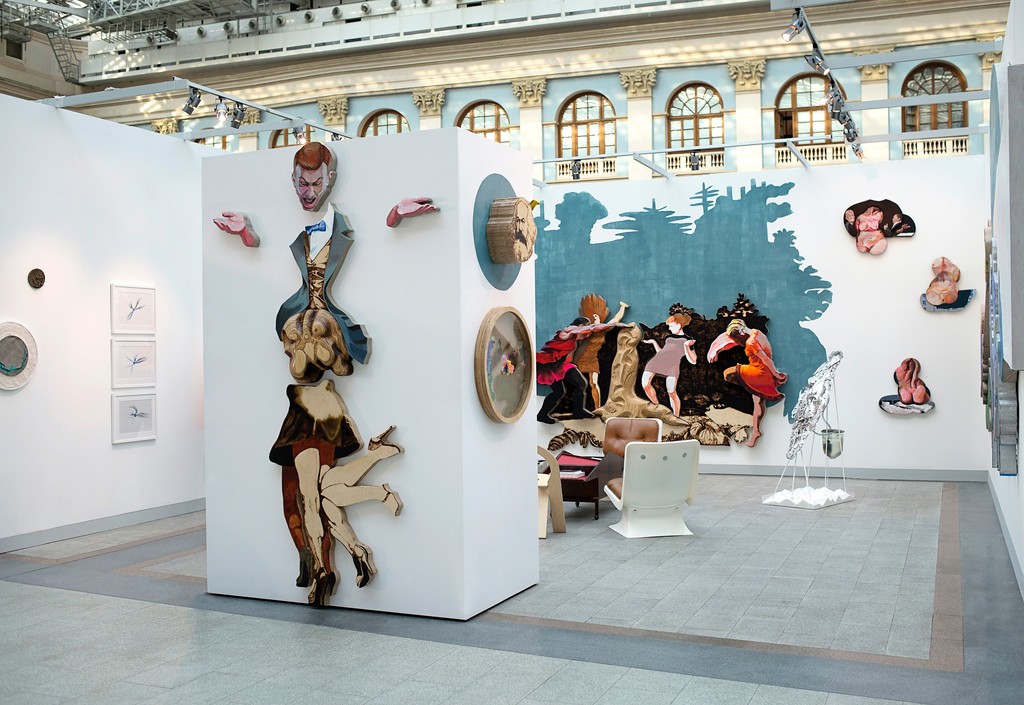 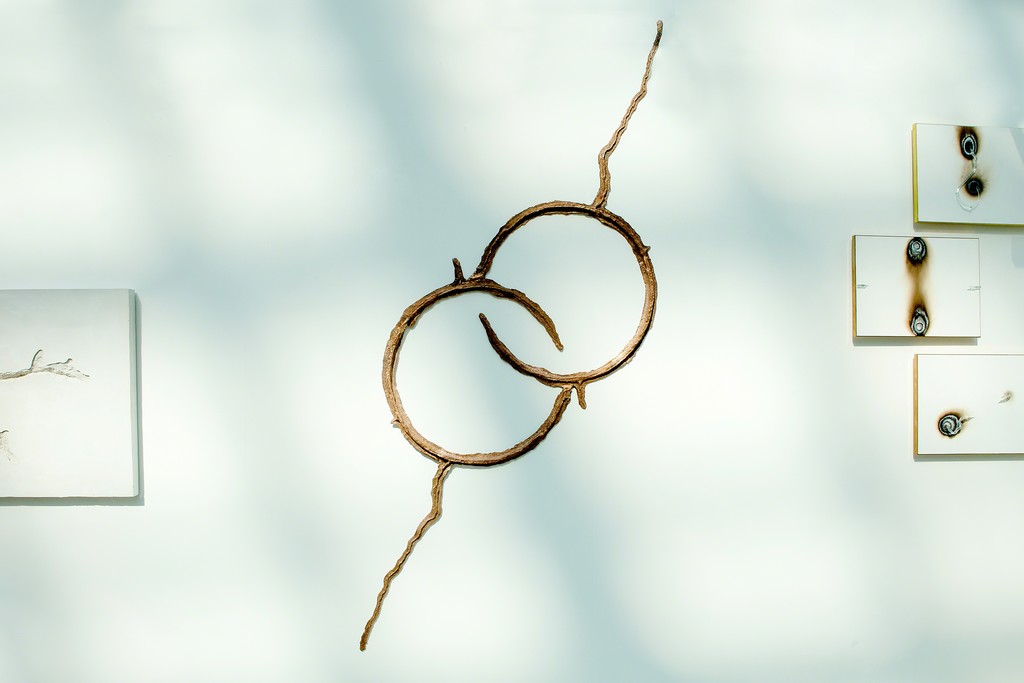 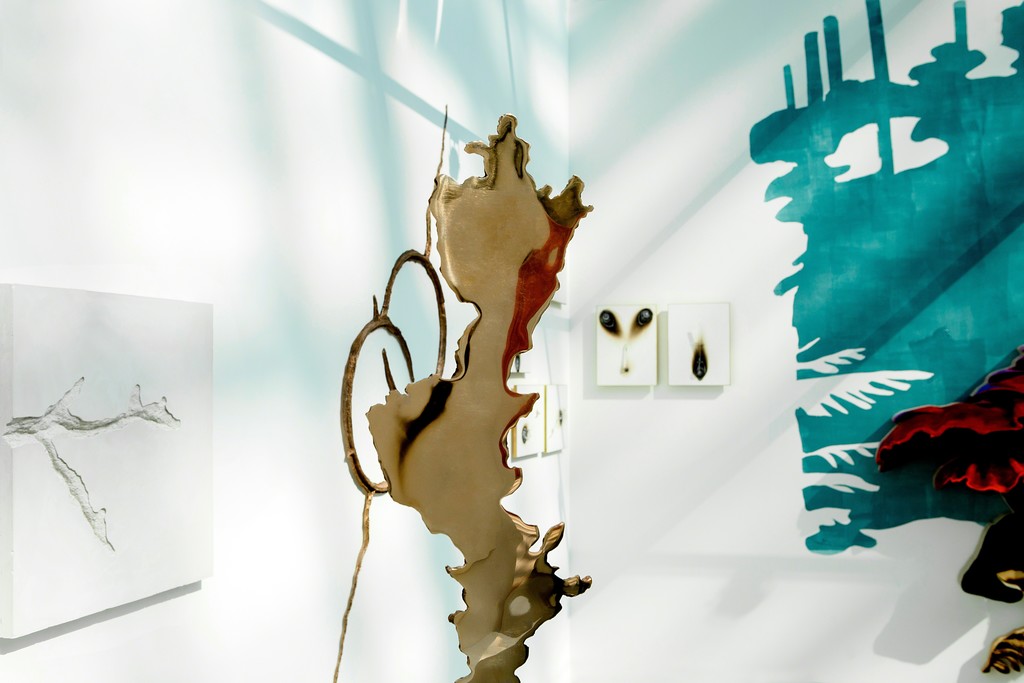 At Cosmoscow art fair Anna Nova Gallery is pleased to present the first common project of St. Petersburg artists Alexander Dashevskiy and Denis Patrakeev “Syncret: Two Fingers”, telling of transformation, mutation and state transition.
Alexander Dashevskiy about this project:
“At some point, we got overtaken by a feeling that you can lift the plaid you’ve covered yourself with sitting somewhere by the fireplace, and discover that you have goat legs or that you’ve been long enmossed. Some really hushed and slow incontrollable mutation is going on, and there is no any determined will or sense, and you just follow some dull current. It is as if meat jelly would be slipping down an inclined wall, quietly transforming into a Macedonian salad”.
In his new works Dashevskiy describes body ambits, social bonds, professional and personal identities – unstable and incontrollable. His heroes fall to pieces, flourish, become vague, merge with nature for their own surprise, and lapse into ecstatic state.
Denis Patrakeev about his collaboration with Dashevskiy:
“Our first common project has an element of a game in it. To keep the sense of intrigue and suddenness, we kept giving hints to each other about our work, not showing the canvases and the objects themselves. While Alexander focuses his creative effort on the visible world – consistent, material, and corporal, while he speaks with metaphors of the cultural past or the present, I tend to operate formulas of the spirit, looking for an invisible and immaterial form, a metaphor, or a symbol that exist before the art or remains after it as some origin or cause. In the simplest terms, his works are about the visible world, and mine are about the invisible one”.
In his works presented within “Syncret: Two Fingers” Patrakeev speaks of mystical processes, alchemical bonds, current and transformation. His works are at the point where metaphysics, ecology, and technology ally in a marriage, illogical, and yet somehow harmonic.
Alexander Dashevskiy about the title of the exhibition, “Syncret: Two Fingers”:
“Two fingers relate to several idioms that Denis and I had in mind while working on this project. Two fingers is the gesture of Christ Pantocrator, of the Roman orator, and even the final goodbye of lady Morozova imaged by Vasily Surikov in his artwork. We put all of these senses into a blender, mixed them up cheerfully, and came up with the name. It is as easy as two fingers, but those might be the two fingers that we need to stuck into the electric plug for everything around here to light up”.
Expositional drama of the booth is based on blending the subjects and on interpenetration of personal statements by Alexander Dashevskiy and Denis Patrakeev.