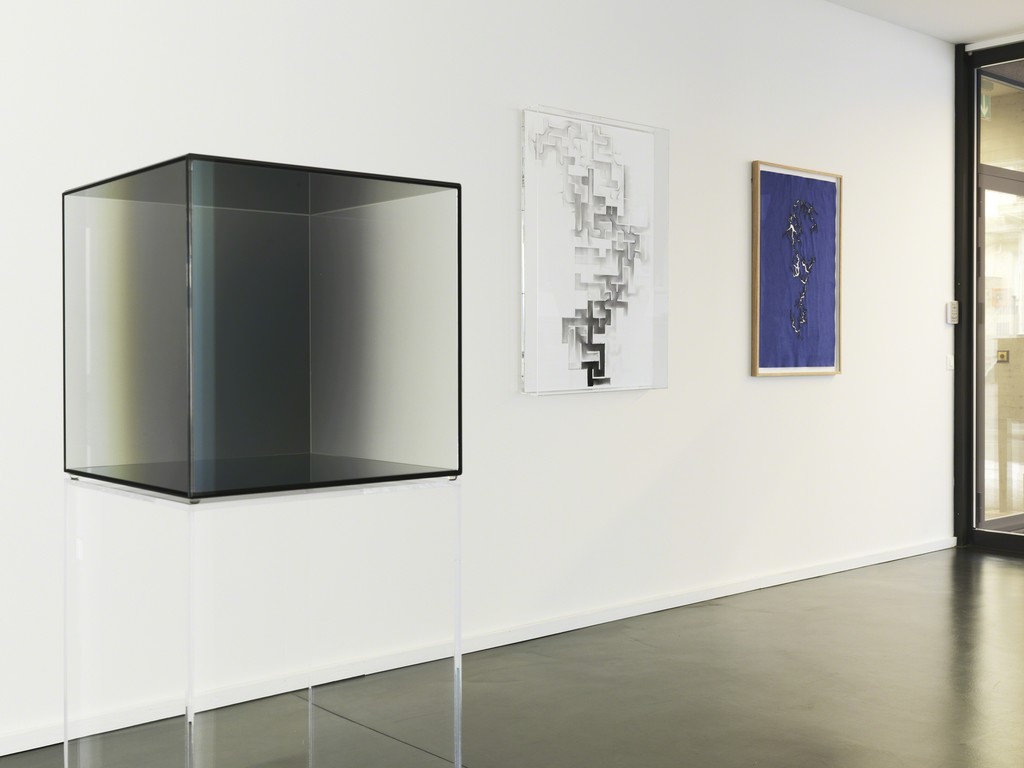 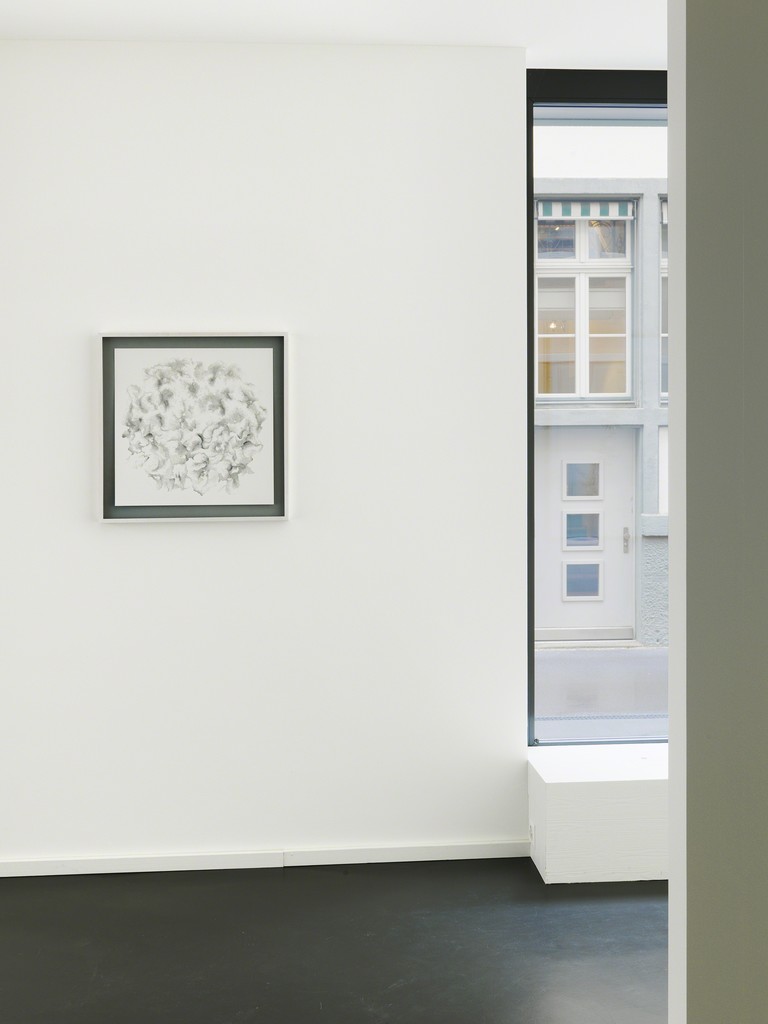 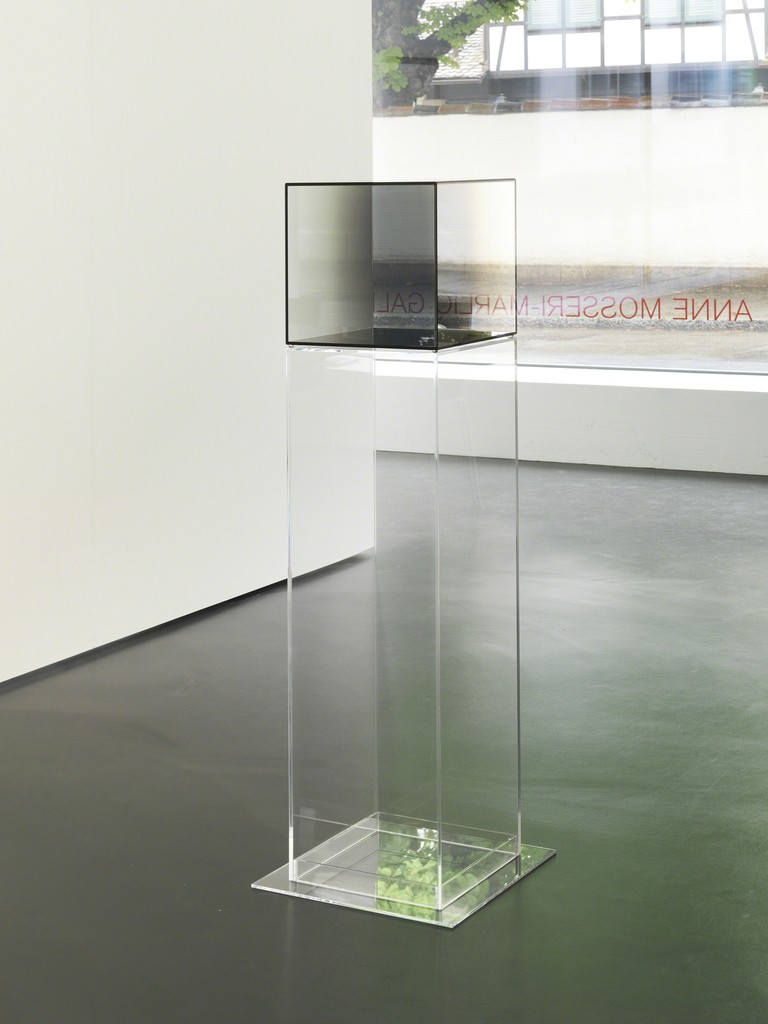 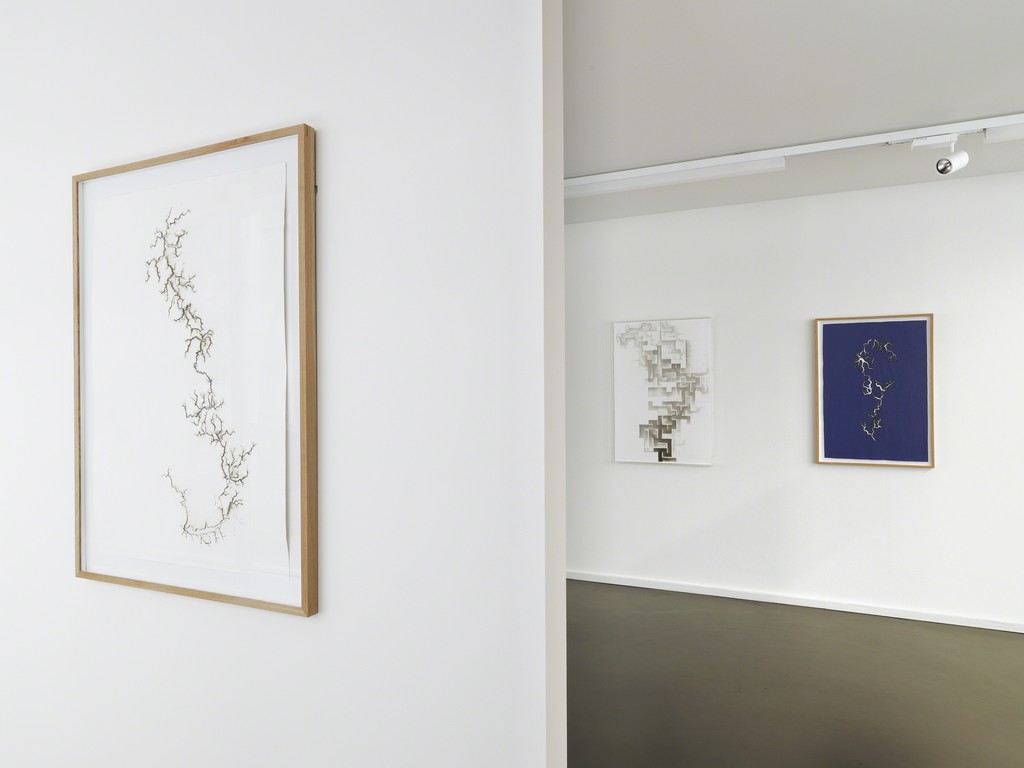 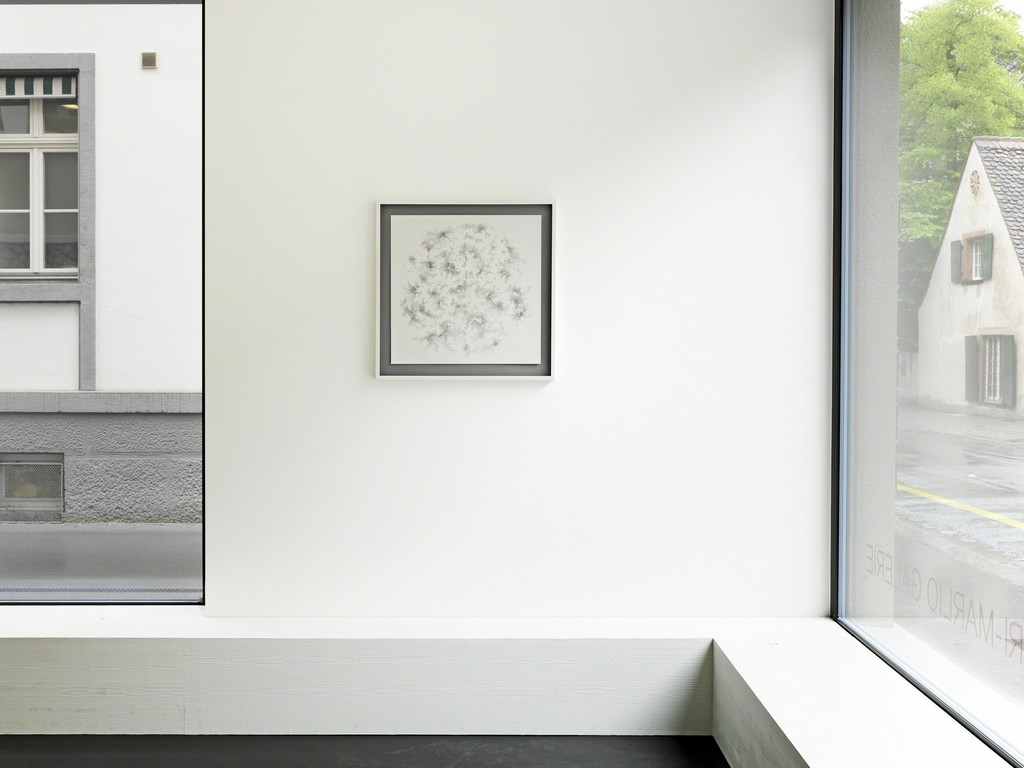 It is an apt case of happenstance that the mental image of an absent sculpture is at the heart of a show uniting artists that make ideas manifest, each playing with the tangible and the visible in so doing. For the first five weeks of the exhibition ‘Reverse Order’ the viewer must imagine Troika’s sculpture Polar Spectrum within the exhibition space. (The work will be on show at the Centre Pasqu’Art in Biel until June 14 th arriving in Basel on June 15 th.)

With Polar Spectrum (2015) London-based collective Troika (Conny Freyer, DE, Eva Rucki, DE and Sebastien Noel, FR) consider how two forms can co-exist even if one would appear to be the polar opposite of the other. When the viewer finds the right point at either end of the large, suspended work they can see either a square within a circle or a circle within a square. These impressions are fleeting and their orchestration required the construction of a huge collar-like tube. This tube’s skin is black, with a coating of graphite on the outside and flocked within; though the viewer cannot overlook its large volume, from the spots where the shapes are evident, it momentarily becomes a flat form at the periphery of the viewer’s sight that frames the view inside. Equally, Larry Bell’s work Cube 1 (2008) works with concurrence, though the American artist’s study is primarily of light. His work in ‘Reverse Order’ is one of an ongoing series of glass cubes that hover above clear plinths; as the viewer moves around them the material is seen to hold light, to reflect and to transmit it, thanks to fine inconel and silicon monoxide coatings applied in vacuum conditions.

If the C Drawings from Tobias Putrih (SI) seem at first unambiguous in comparison, they do not, however, reveal their logic. Each is a collection of countless ink marks on paper, building up to a loose sphere form. The drawing series has evolved over several years, initially recognisably based on the geodesic form of Buckminster Fuller’s utopian ‘Cloud Nine’ domes. Now, as with the clouds or steam or swarms they resemble, where a pattern emerges, it quickly dissolves. The organic, irregular forms of Troika’s drawings made by burning paper with an electric charge such as Cartography of Control (2014) and Path of Least Resistance (2014) emerge from their play with controlling processes that are, inherently, beyond control. The singed lines are burnt through paper as a current tries to overcome the material’s resistance, where the paper was saturated with water, for example. As it strives to close the circuit it follows numerous false leads as well as successful routes. How the current ‘knows’ where to go retains an element that is unforeseeable. Similarly, Troika’s work Labyrinth (2014) captures a process – of smoke finding a way through a labyrinthine structure – that can be understood but not predicted or planned. The soot traces where heat has flowed mark how the soot chose to navigate the paths and dead ends of the environment that constrained it.

Different strategies inform and define these works. Bell is renowned for his focus on the possibilities offered by frameworks such as a cube or what he calls a ‘standing wall’, and has devoted decades to the exploration of the effects of minute variations of his media within these. Nonetheless, his approach is characterised as intuitive and improvised. Troika frequently define tight parameters for their works before deliberately introducing an element that cannot be controlled. They thus discover the limits of what can be designed in works with soot or electric current. Using all the contemporary and traditional tools at their disposal, at what point do they exceed that which can be predicted? Tobias Putrih famously started and dropped out of a degree in physics but returns repeatedly to scientific methods. Borrowing a scientific approach, hypothesis, experiment and outcomes are fruitful ways of planning and enacting his works, from drawings to large built structures. Another strategy is the reconstruction of other scientists’ and designers’ forms anew within an art context. Putrih grew up in Tito’s Yugoslavia, and as a young artist he discovered the disparity between the object-driven Western art world and the Slovenian environment where no such market demanding objects existed. Unwilling to embrace one context at the expense of the other, the aforementioned practices are a means for him to make and build while eliding the status of a completed artwork. (Troika and Bell also create objects that seem ambivalent about their positions as things: Bell’s cubes are seductive, but their attraction lies in how they capture light, something intangible. So too Troika’s sculpture tips into a two-dimensional state despite its indisputably large presence.)

The exhibition ‘Reverse Order’ focuses on unstable territories, grasping transitory moments. Seen in Putrih’s ongoing work with cinemas, ephemerality is found likewise in Bell’s cube – a precisely delineated but nonetheless ever-changing thing – and Troika’s sculpture that generates just a glimpse of visual abstraction, or their works on paper crystallising a charge or fixing smoky traces. Putrih has cited the alchemist as an enviable figure from history, one who could combine a belief in the mystical or spiritual with rational scientific endeavour. Perhaps it is now the role of the artist to reunite these positions, to harness science and technology yet not to lose a sense of freedom and wonder.