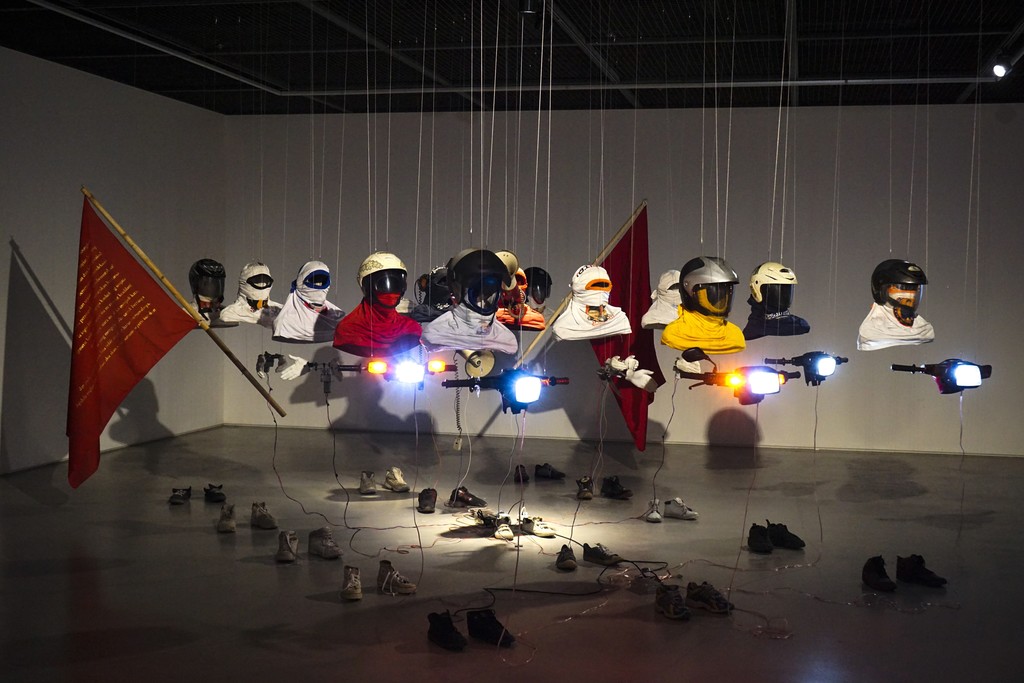 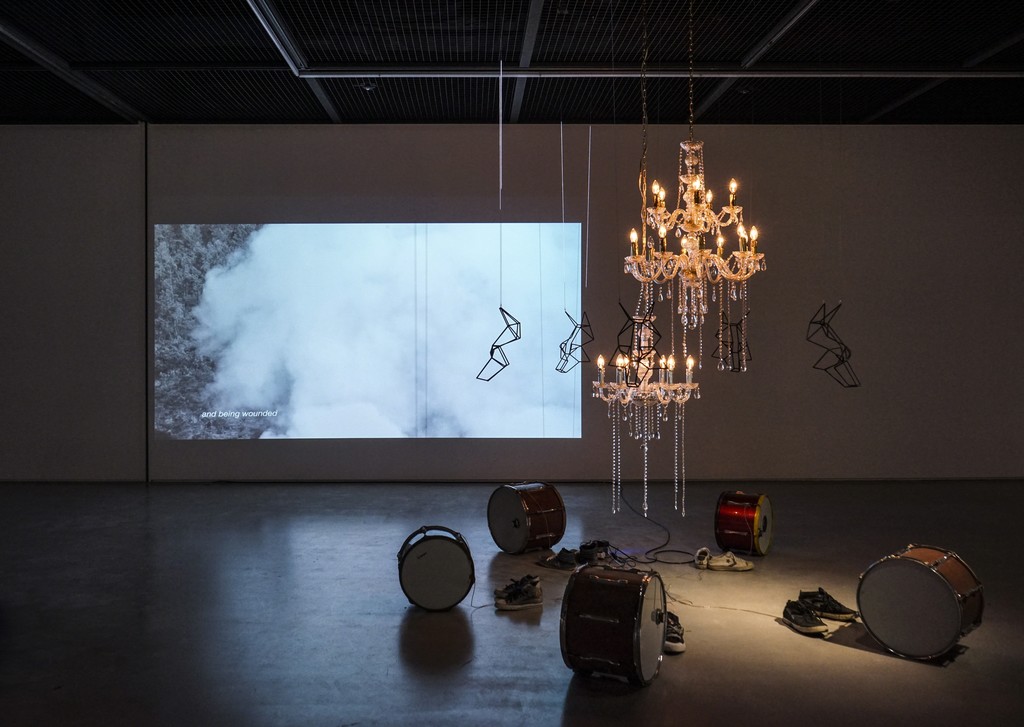 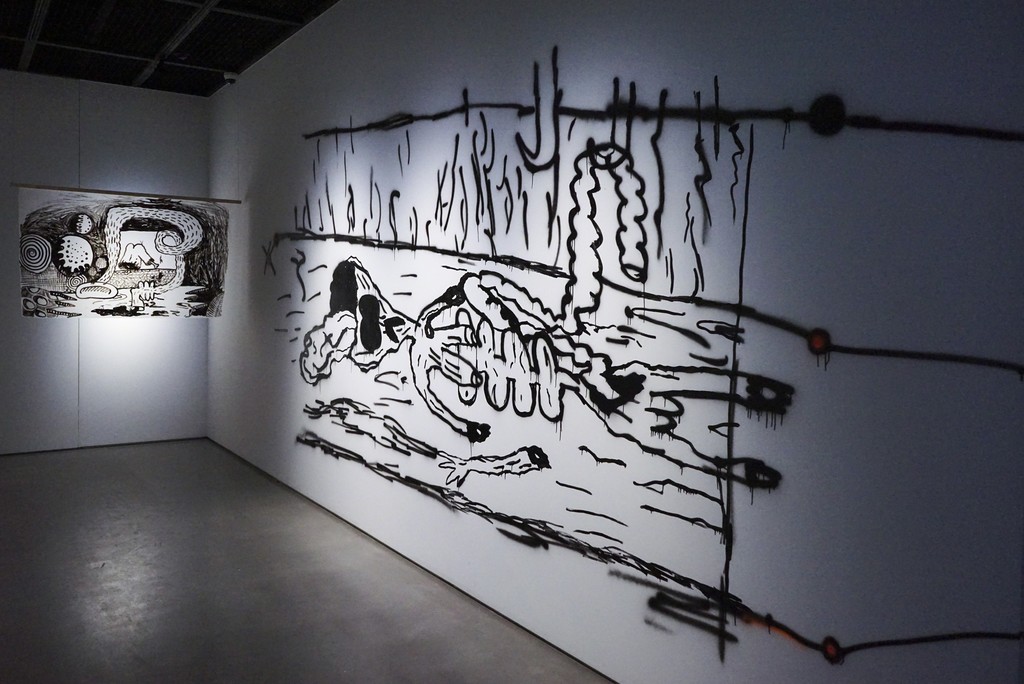 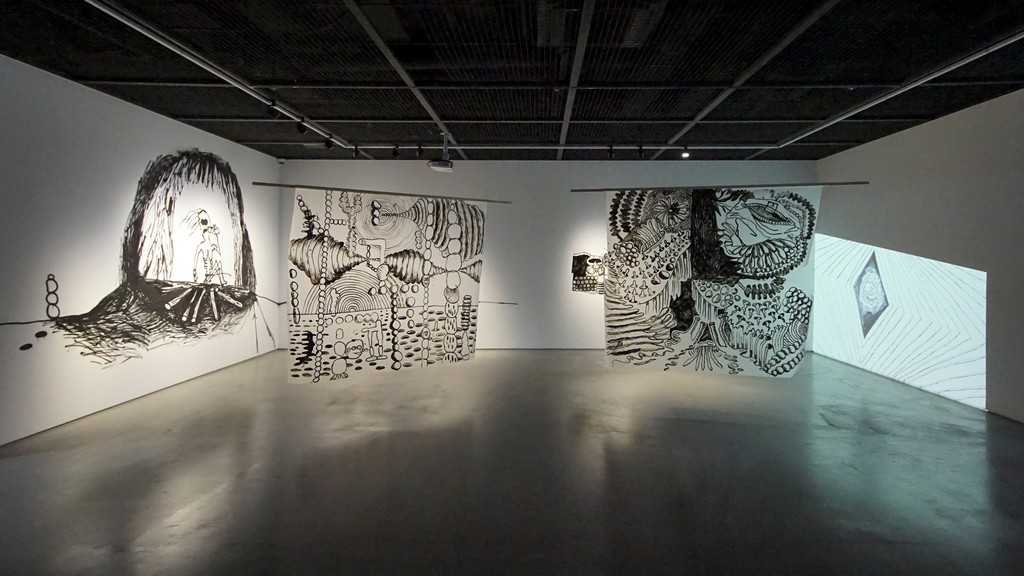 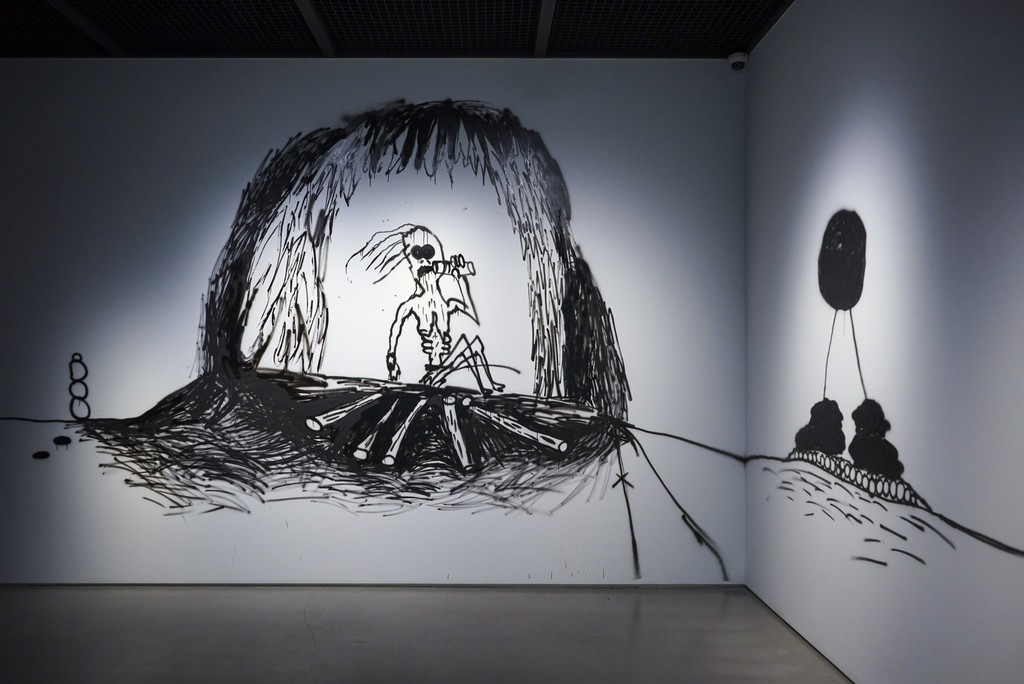 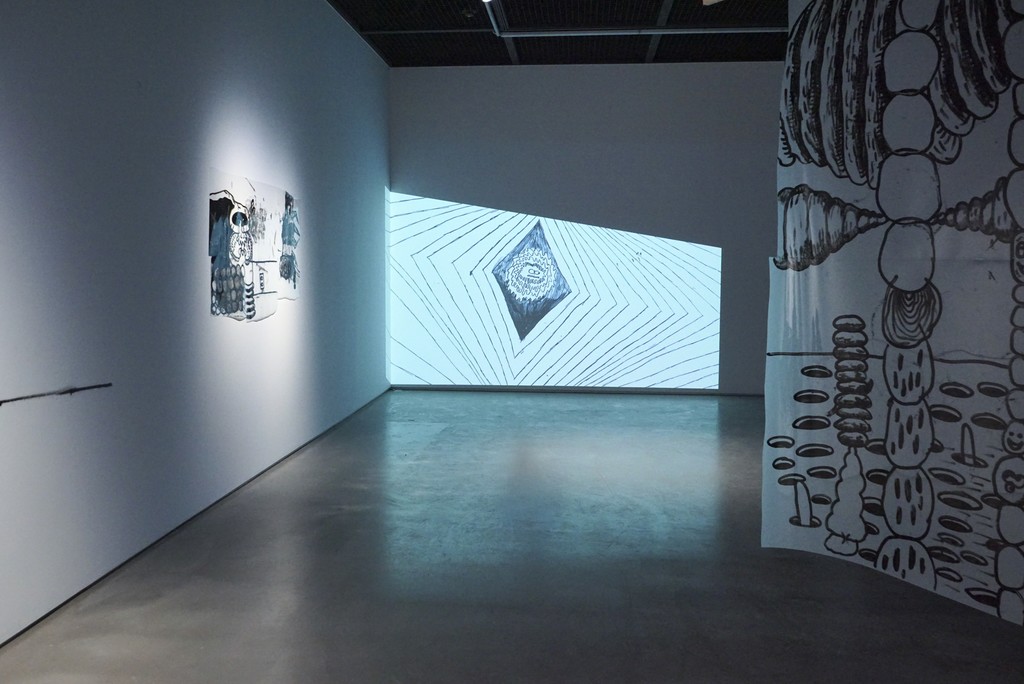 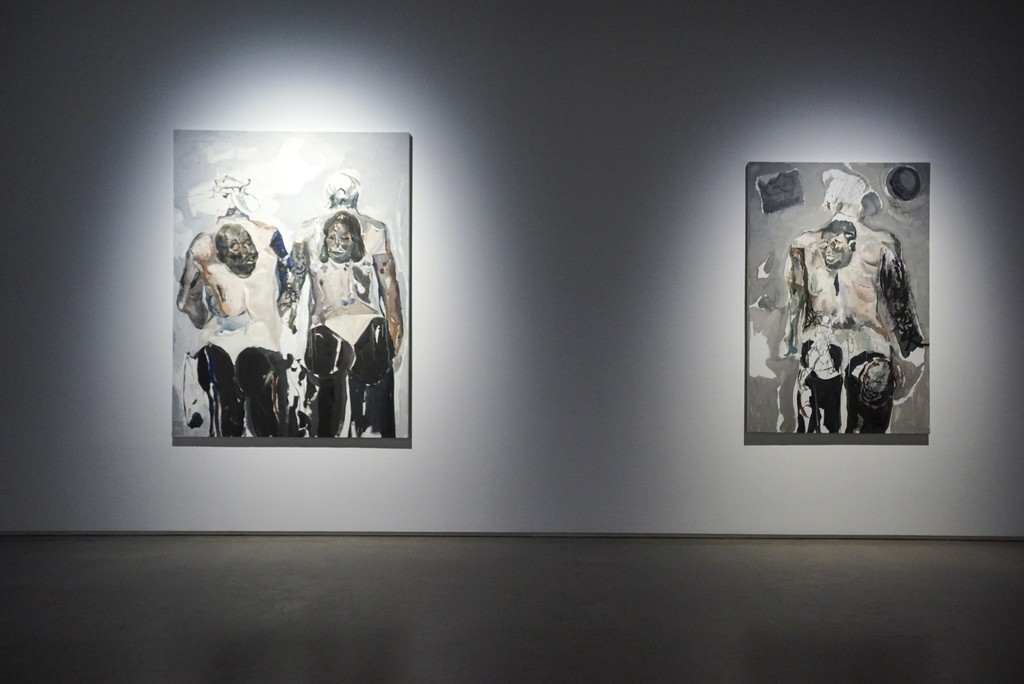 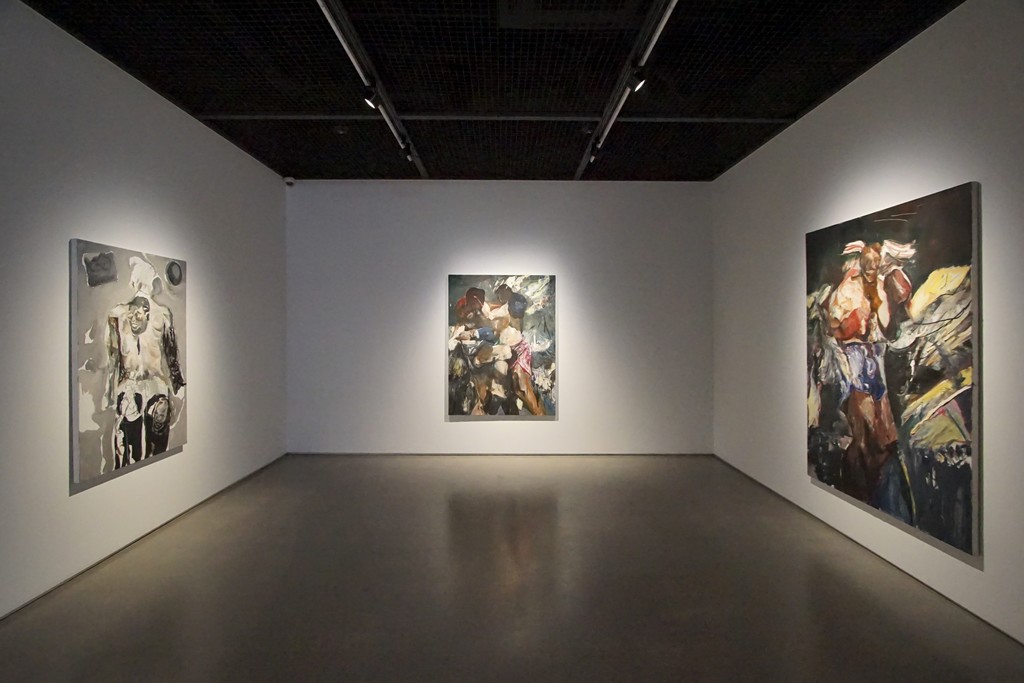 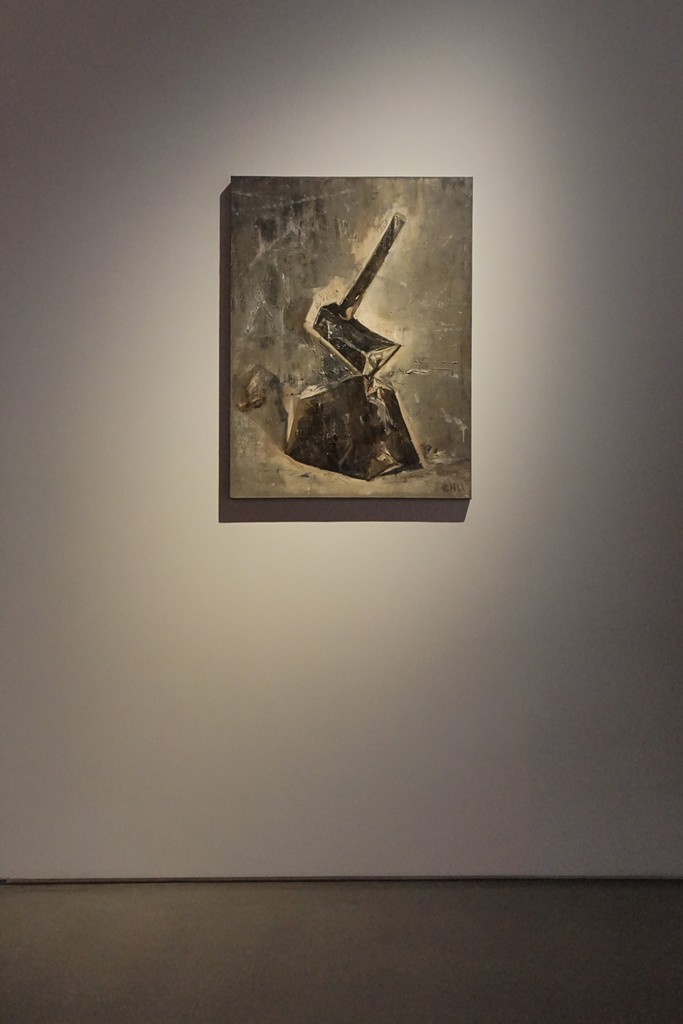 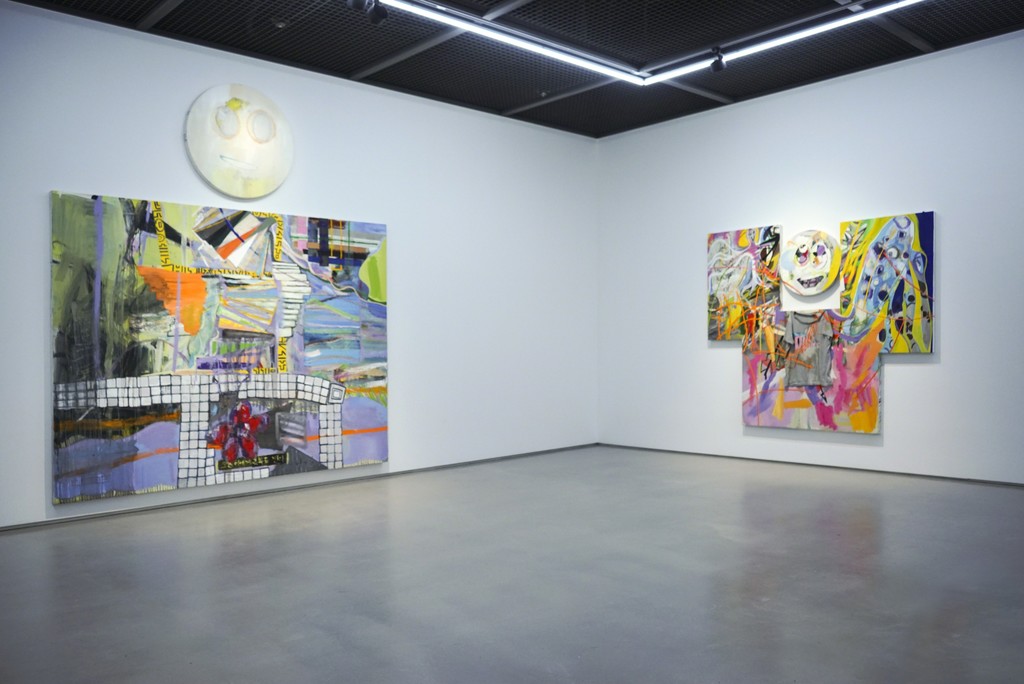 Life is no different from an endless journey spent wandering a maze of encounters, understanding, arguments and mediation with a particular target, wherein you either lose your way or plot new coordinates. That target may be a specific person, or it may be a social construct, a goal or an ideal. Ceaselessly lurching at the intrinsic temperature difference within our relationship with this target, we must strive to adjust and fine-tune to the growing gap of disparity. <시차적응법JET LAGGED> is an exhibition of four artists fighting the time difference formed in these gaps, who plot their own coordinates through diverse visual language to find adjustment.

Indonesian artist Jompet Kuswidananto (b. 1976) takes Indonesia’s particular complex cultural landscape and irrational social-historical structure resulting from its long suffering as a colony, as well as the joys and sorrows and deliberations on survival and adaptation within a boundary space borne by those under the heavy fist of colonization, and extricates them not only from an Indonesian stratigraphy, but from the worldwide context to disentangle these quandaries through installation and video work. Disembodied forms standing in file and their soulless mechanical clapping, drums beating without a performer, that vestige and symbol of colonial rule, the chandelier—his arrangement of such elements is a frank expression of an inescapable identity long-formed in colonial culture, and the despair and struggle of the individual surviving through it all.

Jompet Kuswidananto studied communication at the Faculty of Social and Political Science of Gadjah Mada University, and spent the late 90’s as a musician, recording and producing music. Beginning in 1998, his interest in performance and cultural identity led him to work with Teater Garasi, a contemporary theatre group and artist collective. Music and performance make up a significant part of his oeuvre, as Kuswidananto uses sound, video and machinery to transcend the limits of medium and create immersive narratives within space. Kuswidananto analyzes the encounter between Java and foreign powers, and uses that result as a basis for expressing the individual identity, and the identity of the individual within the group identity through the artist’s personal perspective. Using a diverse toolbox of materials, Kuswidananto draws the viewer to a space without temporal-spatial boundaries, a space that does not exist, inviting them to join Indonesia’s tumultuous political history. Site-specific and without fixed form, Kuswidananto’s oeuvre reaches phantasmal as it confronts the world in a place of tangled space-time

The representative of the current generation of young Chinese artists, Zhu Xiangmin (b. 1989) focuses on capturing and contemplating the appearance and behavior of young people in the face of the rapid politico-economic change taking place in Chinese contemporary society and their emotional state or psychological anxiety, through the specific medium of painting. For example, while he expresses the form of tattooed youth in slow and indolent strokes, by expressing young boxers with a certain speed and roughness that one can only think of as a metaphor for the haste and chaos of modern society, it becomes a study on how the artist can maximize his intention through medium. In the process, the artist emphasizes painting not only as a method of expression, but as an all-encompassing field of sensation, and thus expands the very meaning of painting.

Artist Baek Kyungho (b. 1984)’s strength lies in his endless fascination with painting and the visual-perceptual play created by formative endeavors for the ideal realization of the medium as a result of that fascination. The artist, from within the vast construct of painting and through the arrangement of image and color without hesitation, or through expression without coherence, endlessly investigates and extends the image’s limits of formative possibility and amusement. Beginning in 2011, Baek’s ongoing

Baek Kyungho was born in Incheon in 1984; he graduated from the Department of Painting at Hongik University and received his MFA from the Department of Fine Arts at Seoul National University of Science and Technology. Baek Kyungho participated in solo exhibitions “Cast Away”, SPACE WILLING N DEALING, 2015; “Red Mountain Lounge”, Gonggann1, 2012; and group exhibitions including “O philoi, oudeis philos”, Atelier Hermès; “Twin Peaks”, HITE collection, 2016; “Crossing Plane: Unit, Layer, Nostalgia”, Ilmin Museum, 2015; “AUTOSAVE: When It Looks Like It Is Over”, Common Center, 2015; and more.

Rae Sim (b. 1983) takes man’s most base internal confessions of inherent loneliness and anxiety, extreme compulsions and obsessions, and expels them through antipodal black and white drawings full of a heavy, murky energy; only to be followed by tens of hundreds more drawings compulsively overlapped and compiled into animations. Broadly, they seem to find their start in a detailed narrative construct eaten away by the artist’s personal anxieties, but the narratives of a soul eaten away, fragmented piece by piece and dispersing without bind, without pause—ironically, they come to a conclusion in fumbling attempts at, or perhaps a yearning for, communication.

As the third installment in

Rae Sim was born in 1983 and received her BFA and MFA from the Department of Fine Arts at Seoul National University of Technology. Sim has held solo exhibitions at ARARIO Museum and Space Hue (2016), and has participated in a number of group exhibitions, including “60sec ART”, Savina Museum of Contemporary Art, 2016, Seoul; “ARTSPECTRUM”, Leeum, Samsung Art Museum, 2014, Seoul; “Young Korean Artists 2013”, National Museum of Modern and Contemporary Art, 2013, Seoul; “Doing”, Kumho Museum of Art, 2012, Seoul; “TOMORROW_OPEN ARCHIVE”, SOMA Museum of Art, 2010, Seoul; among others. She was selected for the first edition of the SOMA Drawing Center Archive in 2006, and has participated in such residencies as Tokyo Wonder Site, Japan, 2013; MMCA Residency Goyang, National Museum of Modern and Contemporary Art, 2013; SeMA NANJI Artist Residency, Seoul Museum of Art, 2015; and now, in 2018, is a resident artist at the atelier of Cité Intertionale des Arts, Paris, backed by Samsung Foundation of Culture.