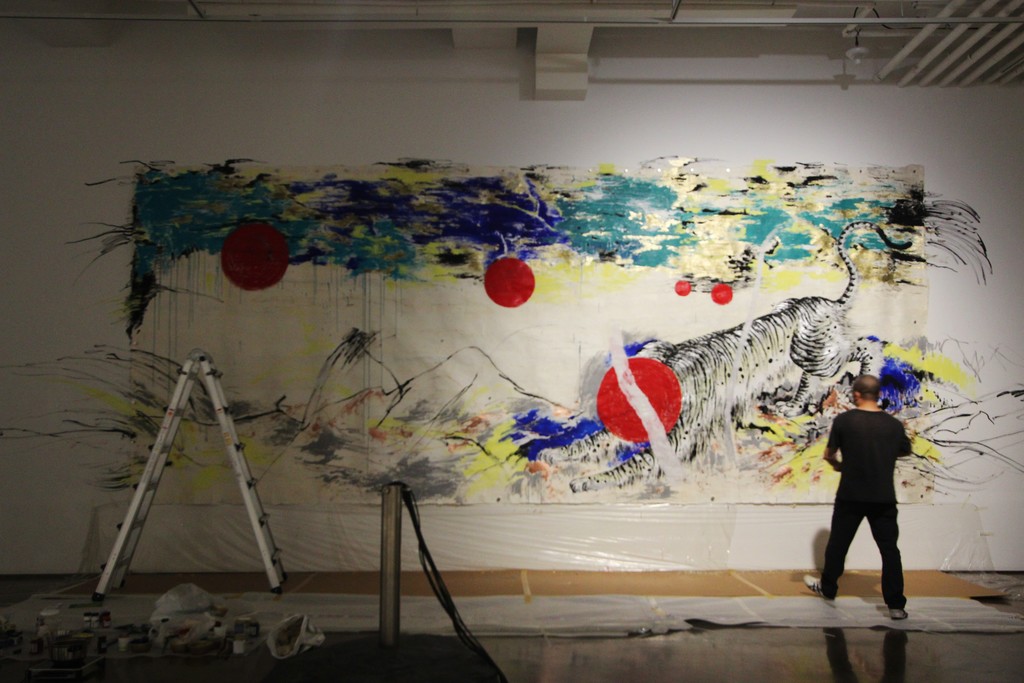 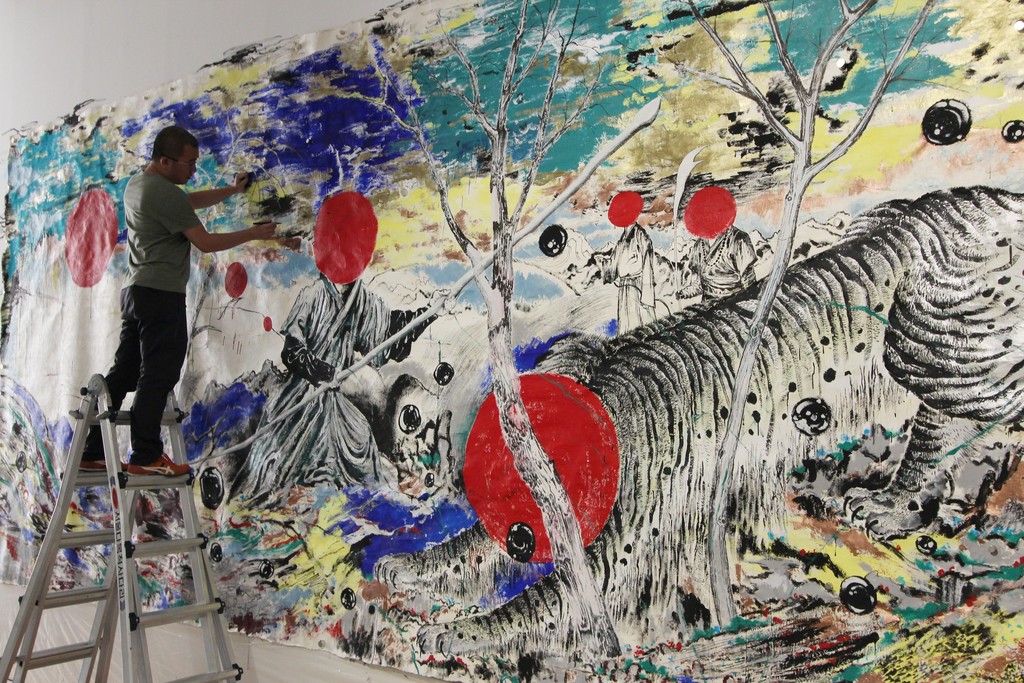 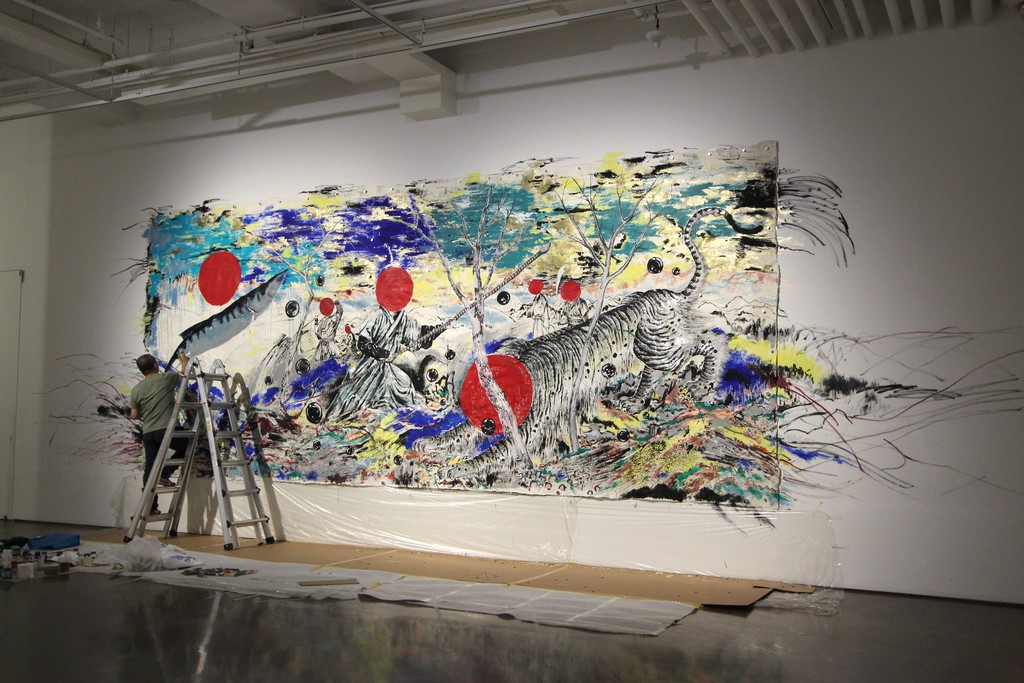 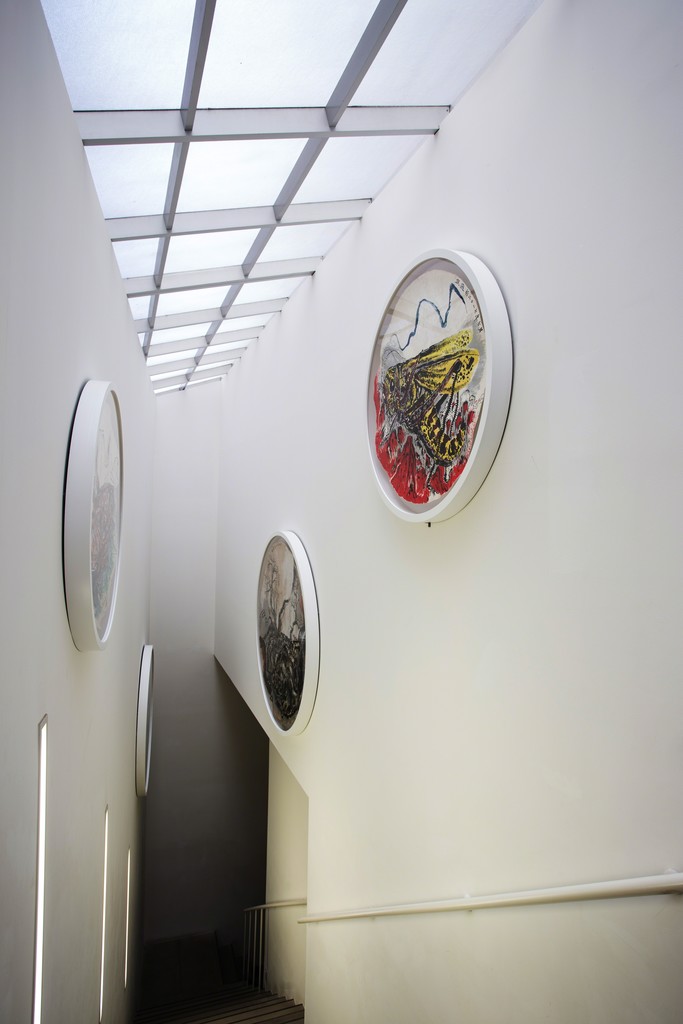 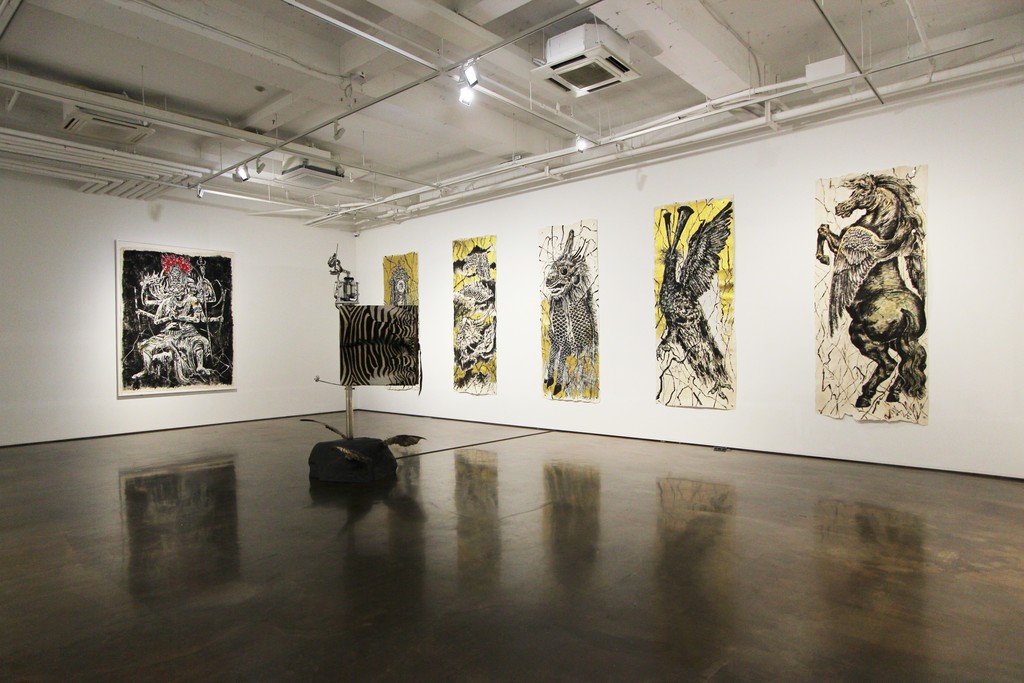 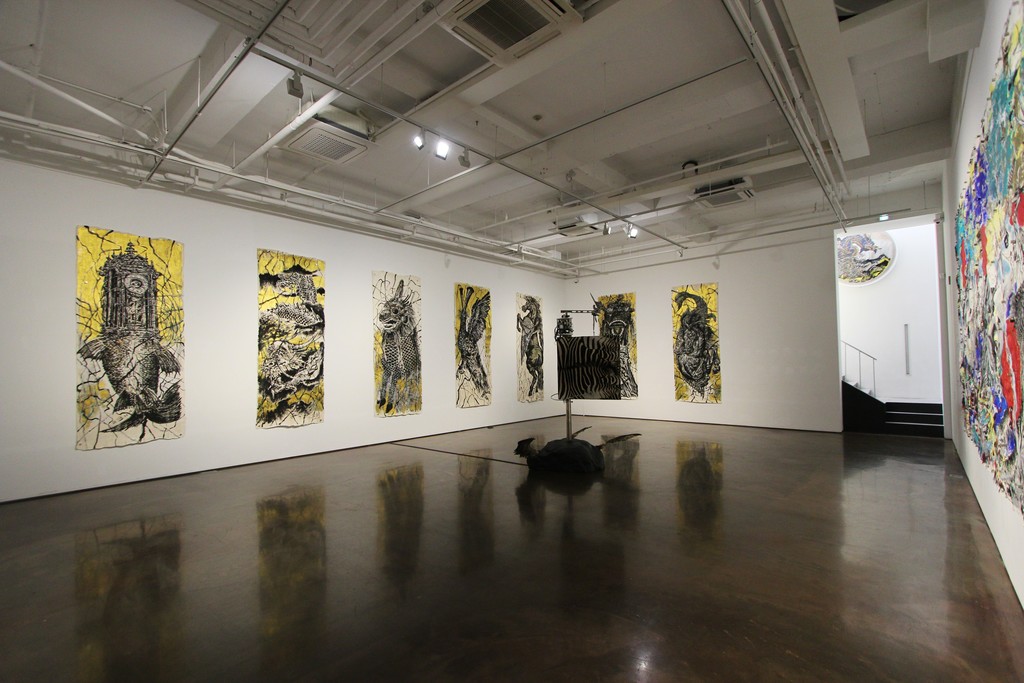 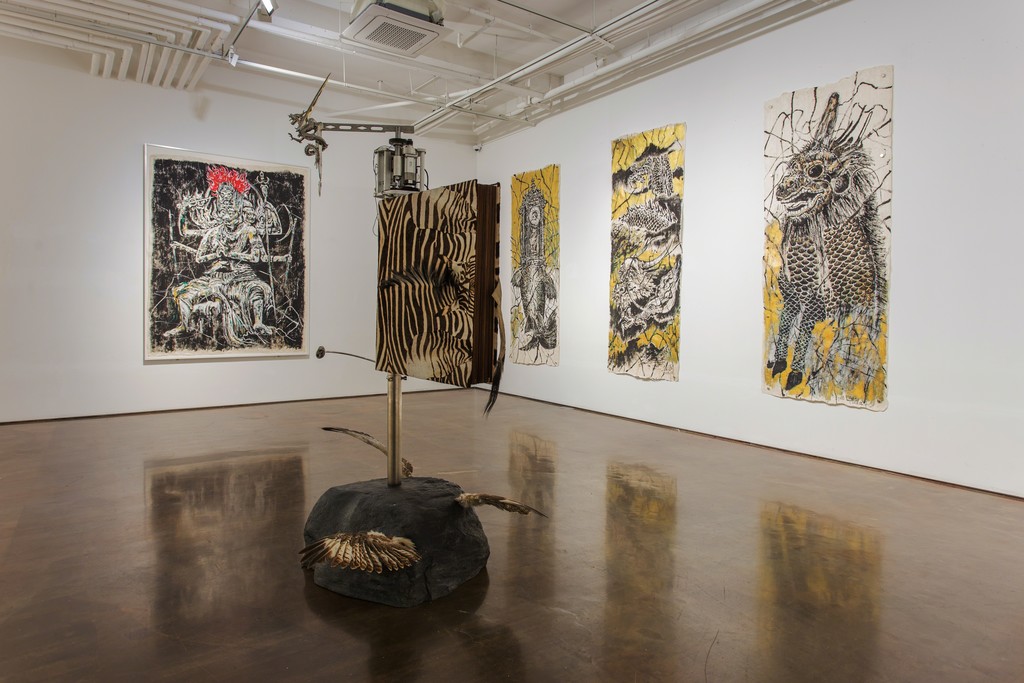 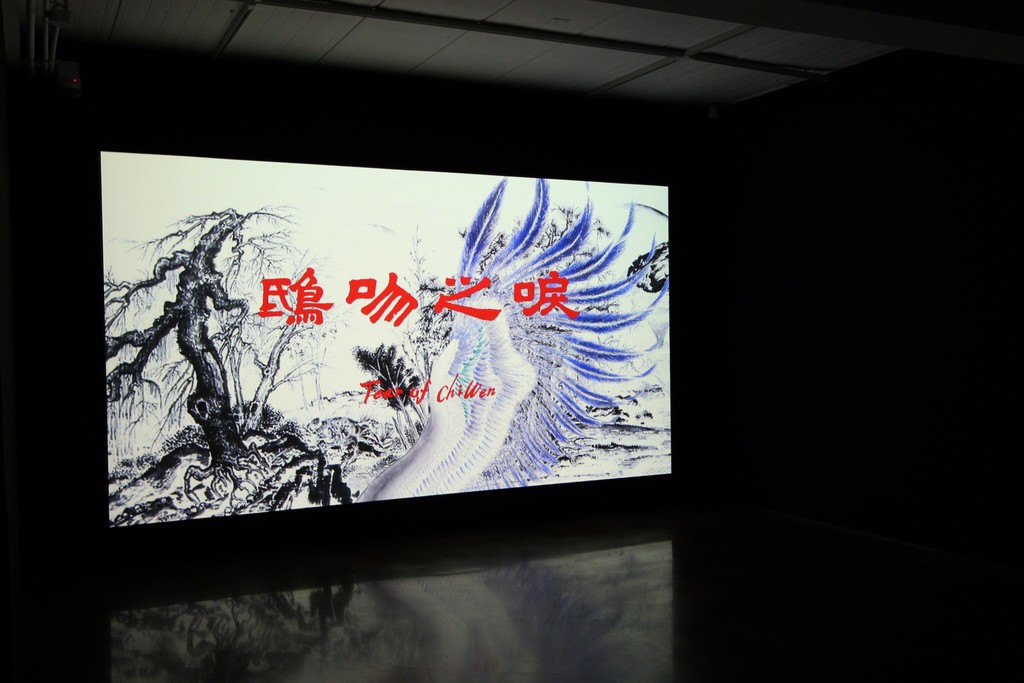 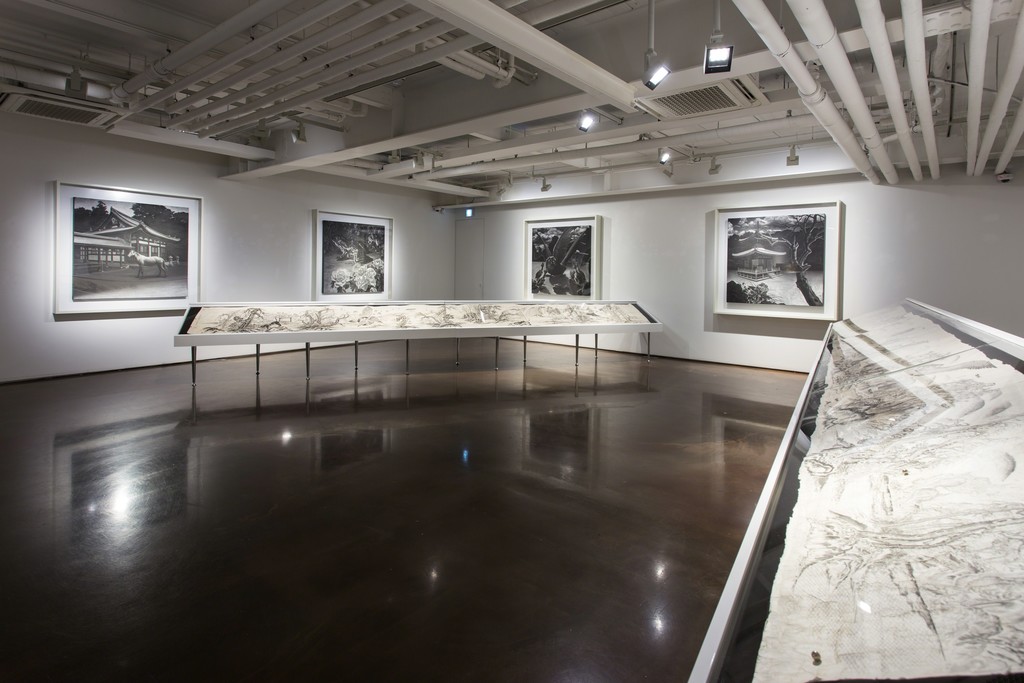 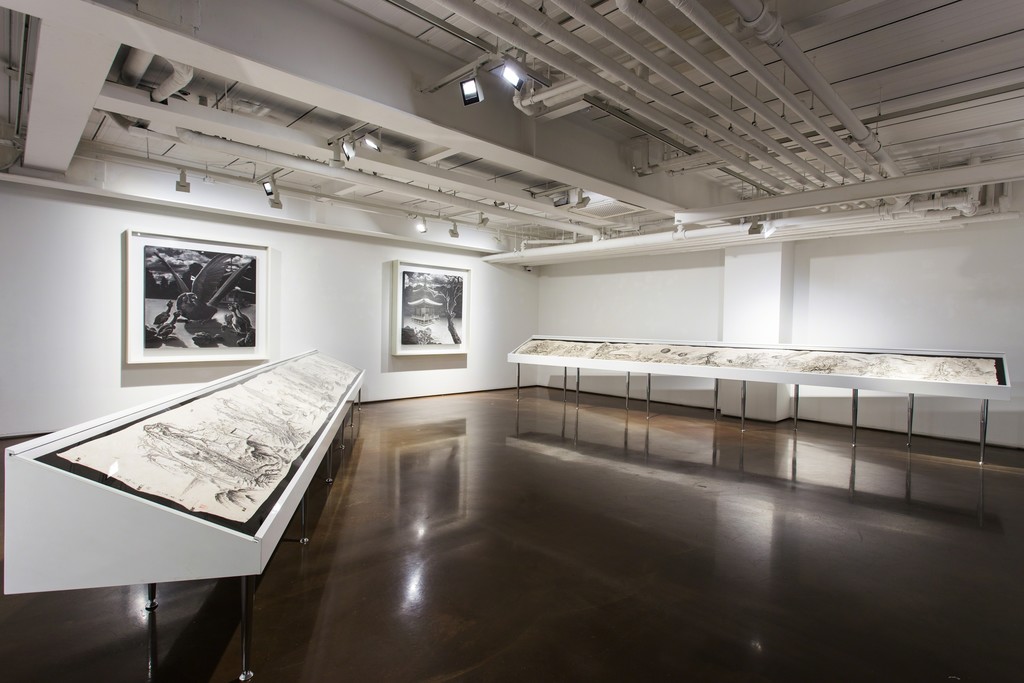 "Tears of Chiwen," Sun Xun’s first solo exhibition in Korea, will show around 20 works including a site-specific scroll painting as well as other paintings, installation, and video works. The artist focused on two key words, tradition and mythic, for the works shown in this exhibition. Chiwen (鸱吻) is a traditional ornamental motif used on the edge of a roof in the form of a young dragon. It has a protective function that symbolizes an ability to control rain and protect against fire. A similar ornament can be found both in Korea (called Mangse) and Japan (called Shachihoko). The ‘tears’ of the chiwen imply the sadness of Asian tradition losing its dominant position in Asian countries against westernization but sublimating the despair into happiness and anticipation for a better future.

Sun Xun was born in a mining town in Liaoning (辽宁省) that boarders between Mongolia and North Korea. His family has had a history of his grandfather being a member of Guomindang (国民党) which has afflicted the entire family during the Cultural Revolution (文化大改革)(1966-1976). He has often heard about the stories from his grandmother as well as his father about their experiences during the period which differed from the history lessons that he was receiving from school. His father, a factory worker, deterred Sun to be close to the politics and encouraged his artistic talent. He supported Sun’s art education which led him to study at Hangzhou Art High School (杭州艺术学校) and China Academy of Art (中国美术学院).

Growing up during Deng Xiaoping’s Chinese economic reform era (改革开放), Sun was educated about the superiority of Communism in school while surrounded by market economy in reality. He found this irony similar to the disparities between the history he learned from school and what was shared by his family. His curiosity to explore the voids has been the continuous inspiration for his works, which as widen through his extensive travel to various countries.

Easily noticeable at a glance, Sun’s works carry a strong sense of traditional Chinese ink painting in his brushstrokes. However, rather than being didactic, political or sharing a moral narrative, Sun pokes at the audiences’ imagination and attempt to communicate with them through his unique humorous approach. Furthermore, with the help of his studio ‘π’ that he found right after graduation from college, Sun creates each frame of the animation with woodcut prints that recall the compositional style Lu Xun’s Modern Woodcut Movement from the 1930s. However, by incorporation his own signature aesthetics and adding film-noir-esque characteristics to the works, Sun keeps breaking the boundaries between tradition and contemporary.

Sun Xun recently concluded his Time Square Arts Project that project his animation "Time Spy" on the billboards of Time Square. Sun was also invited to show at the Guggenheim Museum in New York for the exhibition "Tales of Our Time" which marked his second exhibition at a major museum in New York followed by the Metropolitan Museum’s exhibition "Ink Art: Past as Present I Contemporary China in 2014." The artist’s works have been collected by international art museums and institutions include Solomon R. Guggenheim Museum, New York; Asia Society, New York; Metropolitan Museum of Art, New York; Hammer Museum, Los Angles; Hong Kong M+ Museum, Hong Kong; ARARIO Museum, Seoul; and among others. He currently lives and works in Beijing, China.