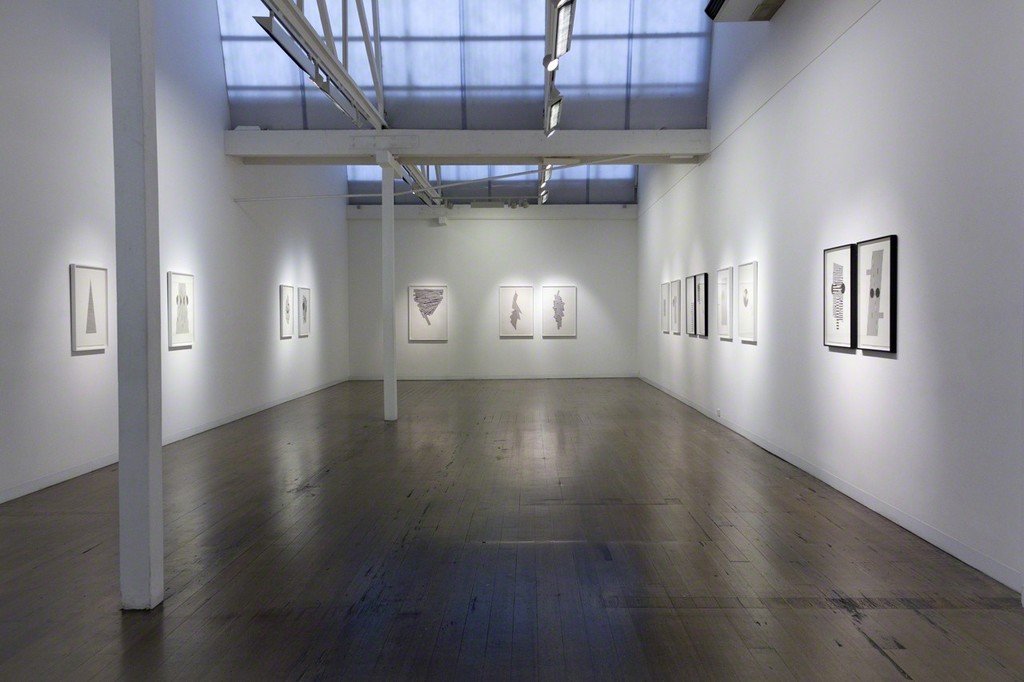 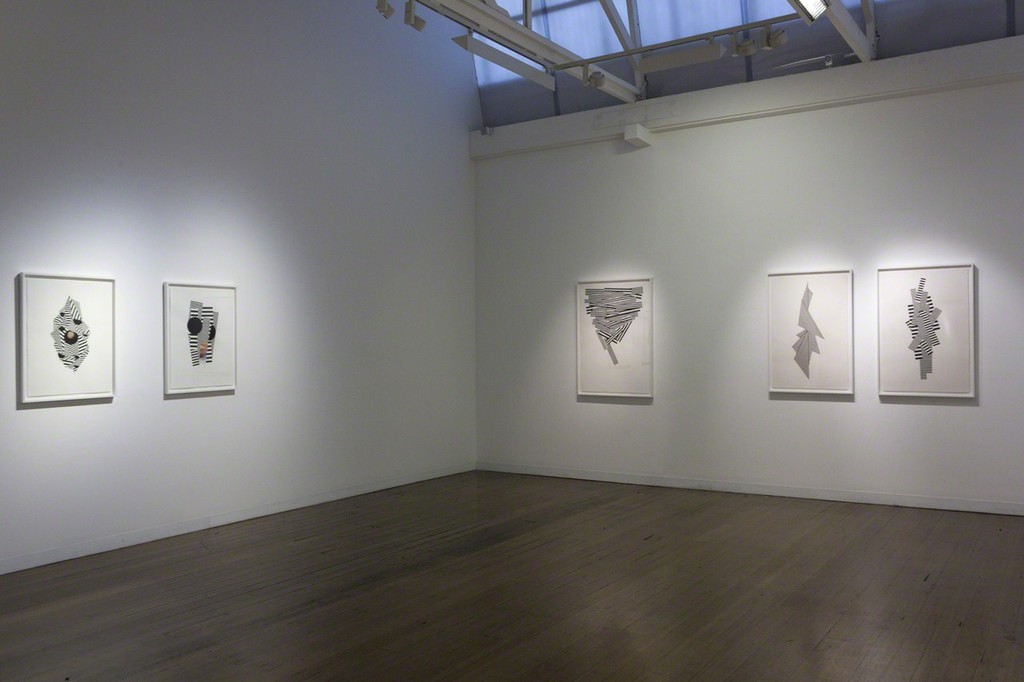 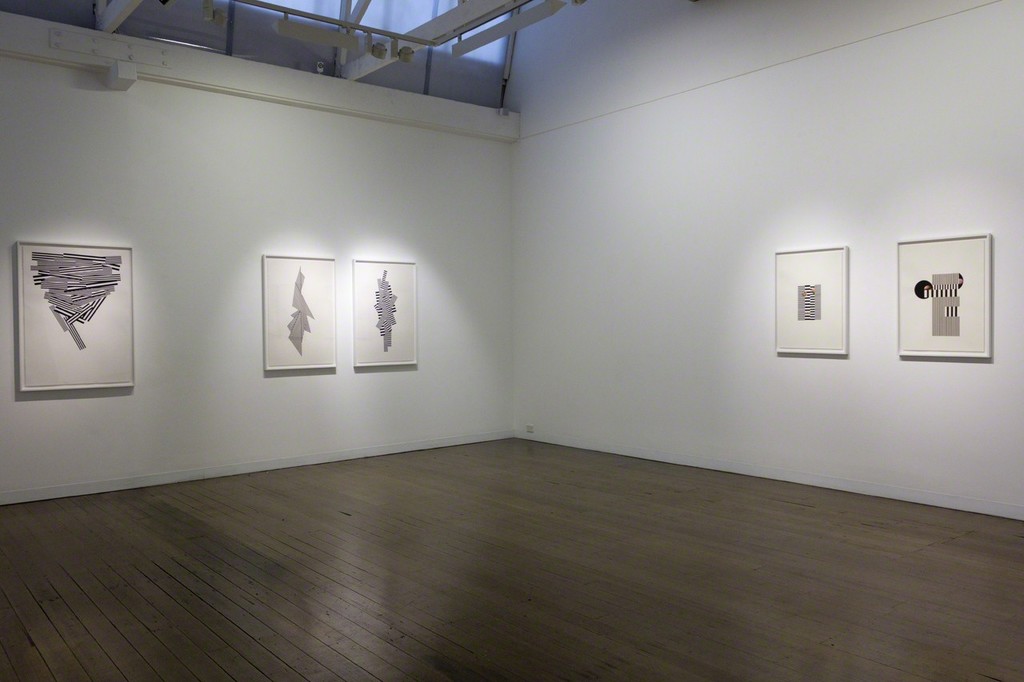 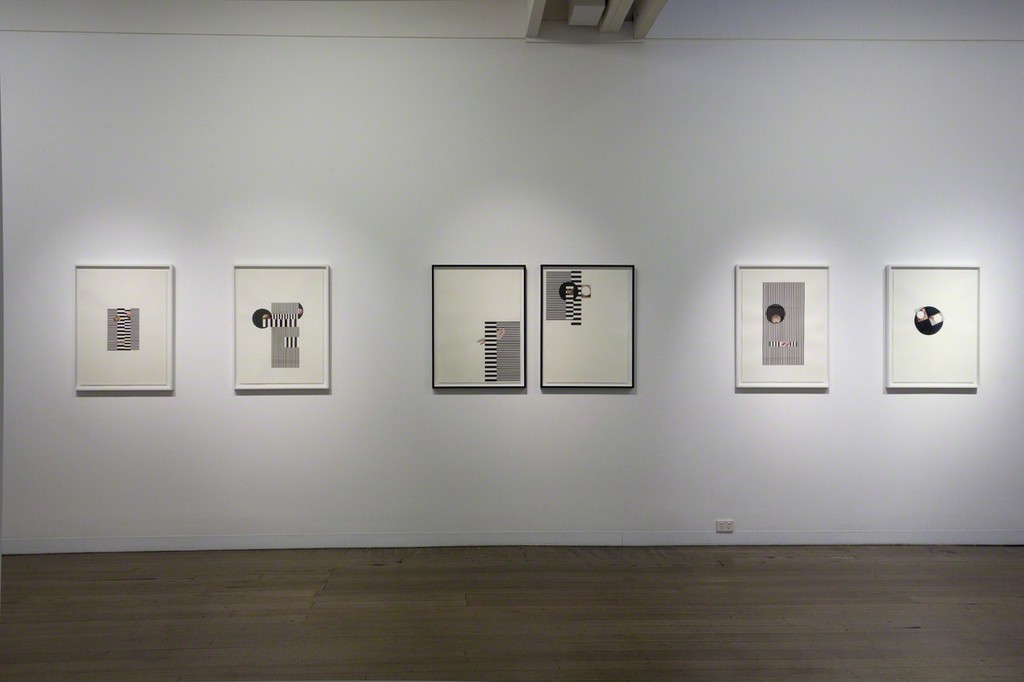 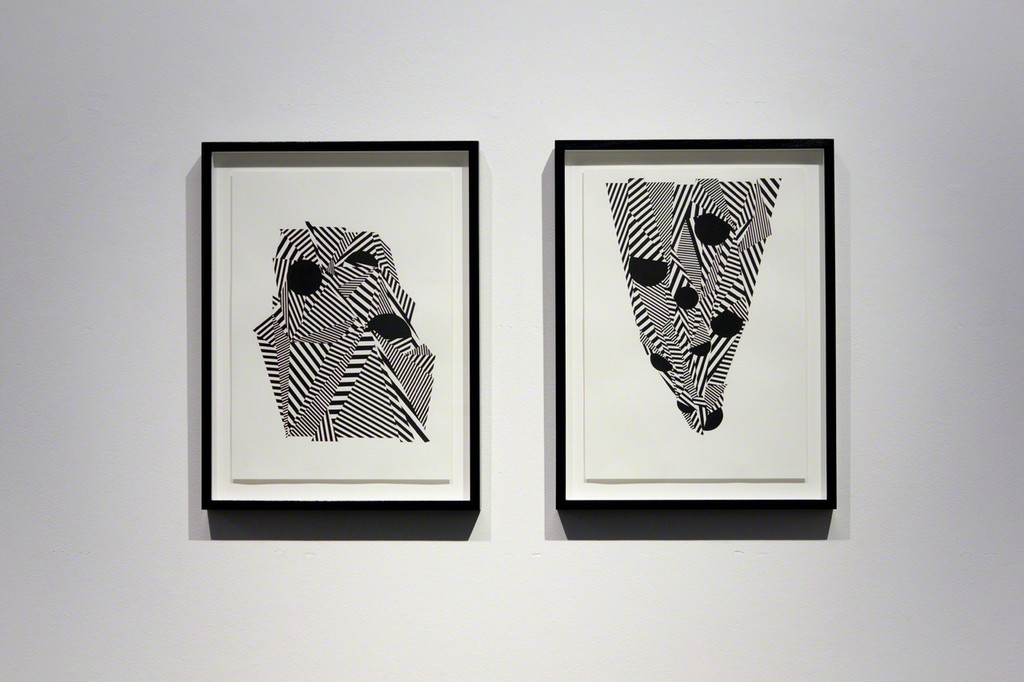 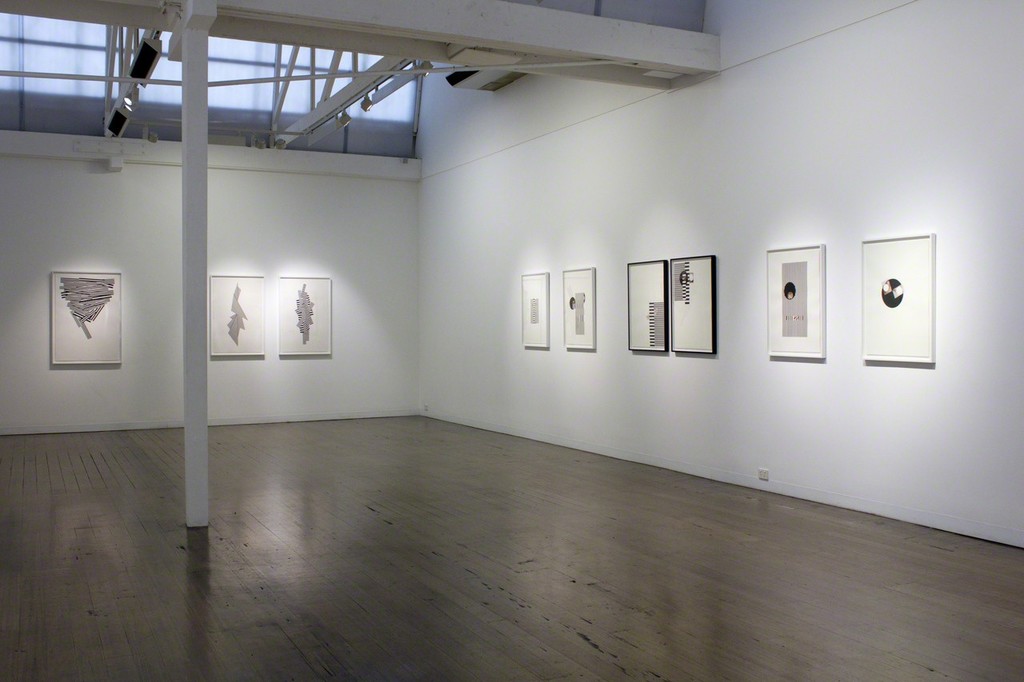 “One can understand history, or time for that matter, in terms of layers, of an accumulation of periods or events layered one over the other, the newest on the top, the ancient past buried deep down.”

Justine Khamara has gained an impressive reputation as an original contemporary artist recognised for her meticulous constructions of two-dimensional photographs into three-dimensional sculptures, often transforming figurative images into complex abstract forms. In Stratum, Khamara works exclusively on paper to present a striking series of drawings almost Op Art in effect. Bands of black and white are repetitiously stacked and interrupted to create penetrating compositions punctuated with collage.

As with her sculptural work, Khamara continues to disrupt visual realities and our experience of looking
– here through the appearance of stripes. Considering ideas of time and history as layers pressing into
the present, these works are in part influenced by Khamara’s visit to the gothic Siena Cathedral, where
the famous black-and-white-striped marble interior had a lasting visual and conceptual resonance. Just as the rigid stripes juxtaposed against the soft pink of Pope Alexander’s tomb in the Cathedral, in these works fleshy interjections of hands, feet and cheeks poke from her powerful monochromatic images.

Drawing on the body and fragmenting the surface of the paper, Khamara proposes new narratives vis-à-vis what we know and what we see. With a quaking intensity her work lingers in the eye, and like archaeological discoveries in modern cities, Khamara digs through the strata of reality and history to connect the past with the present and our human experience of life.

Justine Khamara lives and works in Melbourne. In 2003 she graduated with a Bachelor of Fine Art (Honours) and in 2015 a Master of Fine Art, each from the Victorian College of the Arts. In 2014 she was awarded the Fiona Myer Travelling Scholarship and has been the recipient of a number of grants and prizes. Solo exhibitions include: Reconstructure (2013) and Now I am a radiant people (2011), both ARC ONE Gallery; Erysichthon’s Ball, Centre for Contemporary Photography (2010); and How Excellently We Did-diddilly-do-do Do It, Heide Museum of Modern Art (2007). Her work has been included in the Wyndham Art Prize, Melbourne (2015); Installation Contemporary, Sydney Contemporary (2015); Redlands Konica Minolta Art Prize, National Art School, Sydney (2014); Vertigo, travelling exhibition (Indonesia, Taiwan, South Korea, 2014); Contemporary Australia: Women, Gallery of Modern Art, Brisbane (2012); NEW 09, Australian Centre for Contemporary Art, Melbourne (2009); and Primavera 07, Museum of Contemporary Art, Sydney (2007). Her work has been acquired by a number of important public institutions, including Monash University Museum of Art, RMIT University, McClelland Gallery and Sculpture Park, and Mornington Peninsula Regional Gallery, as well as private collections throughout Australia.