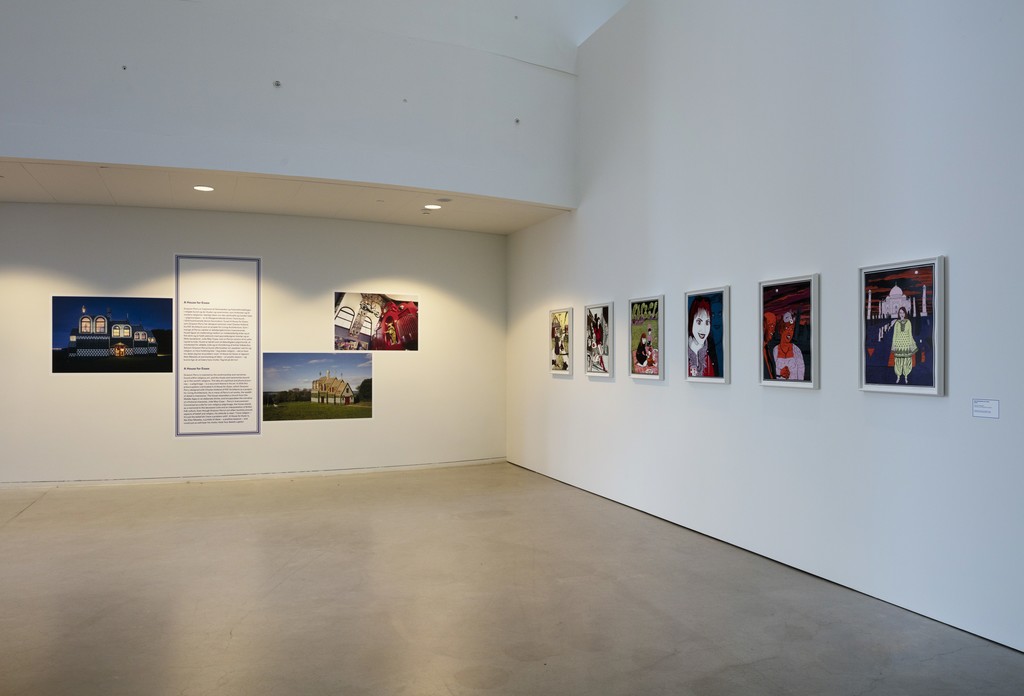 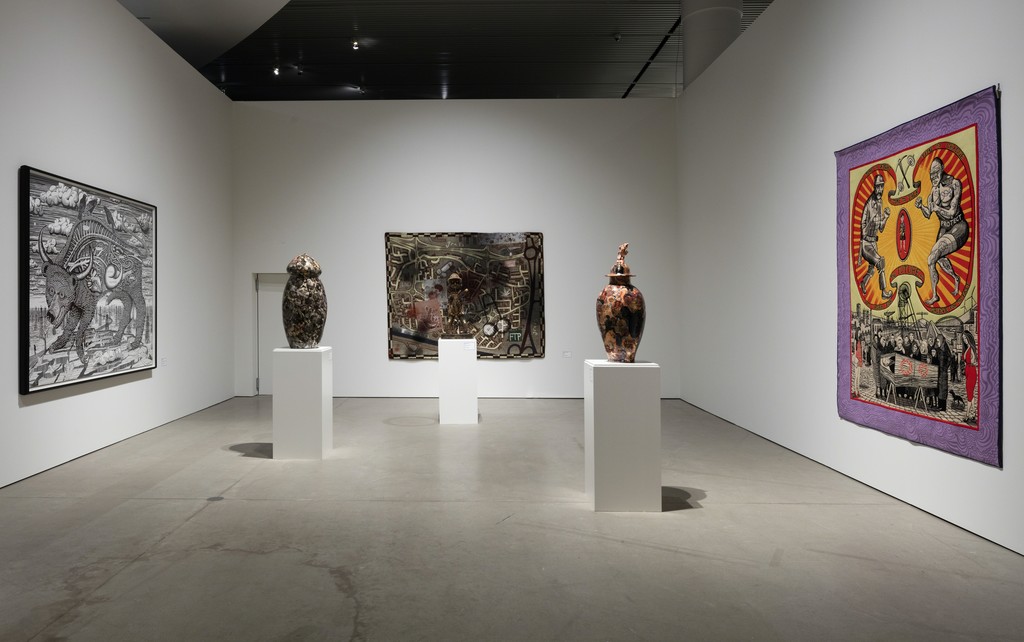 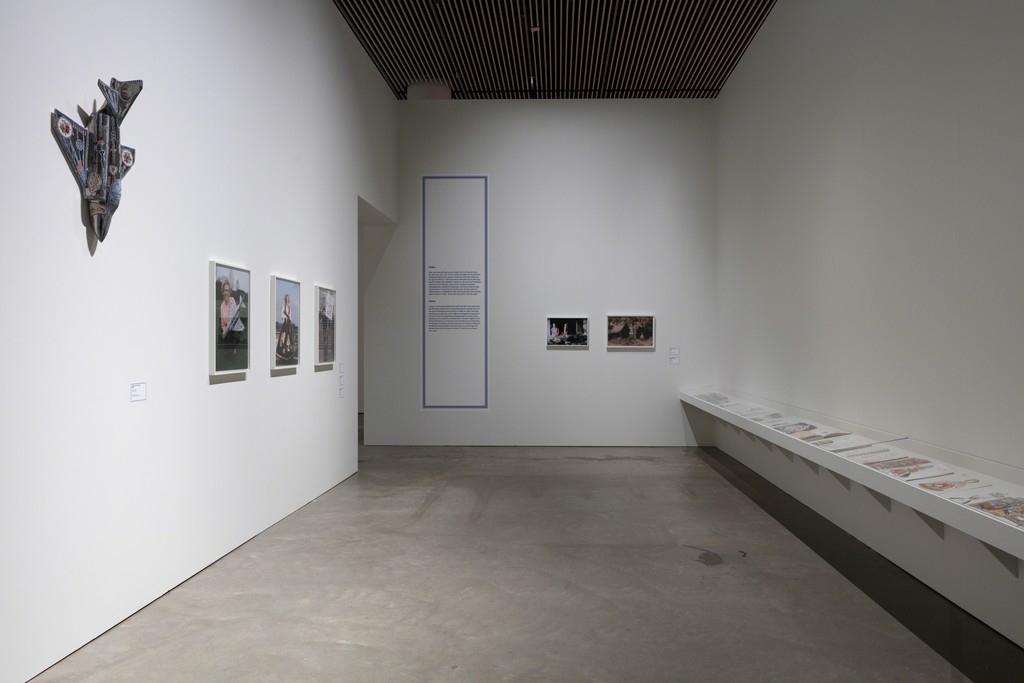 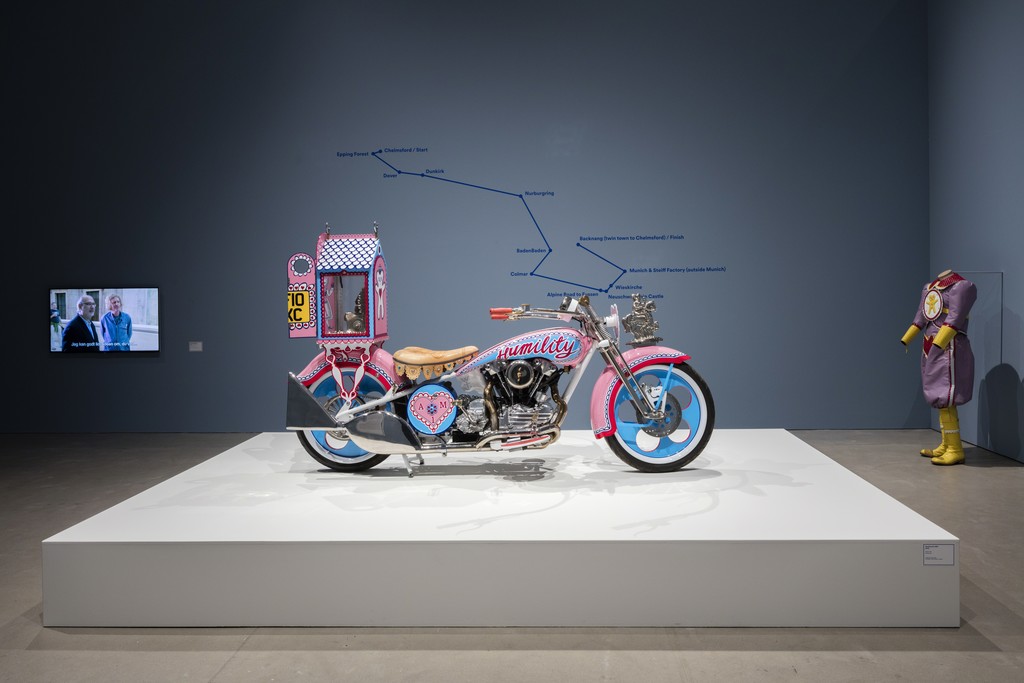 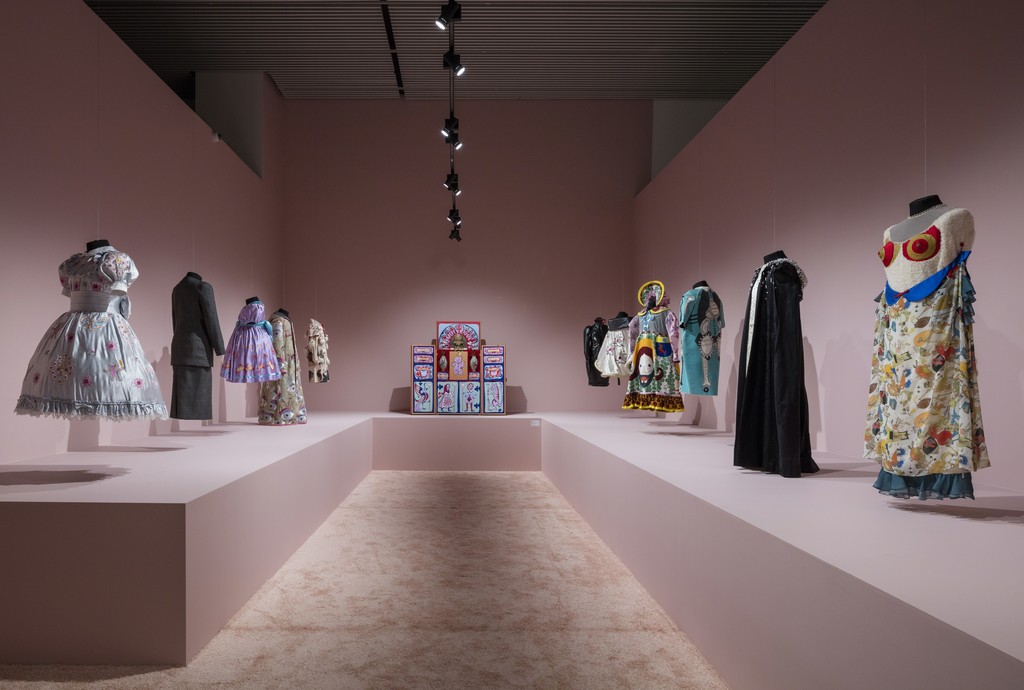 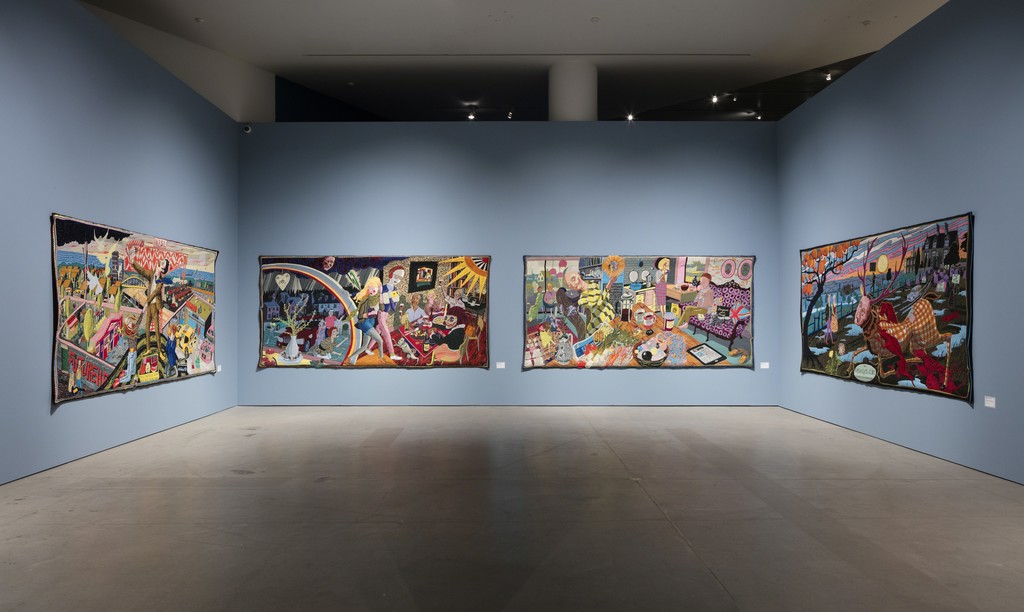 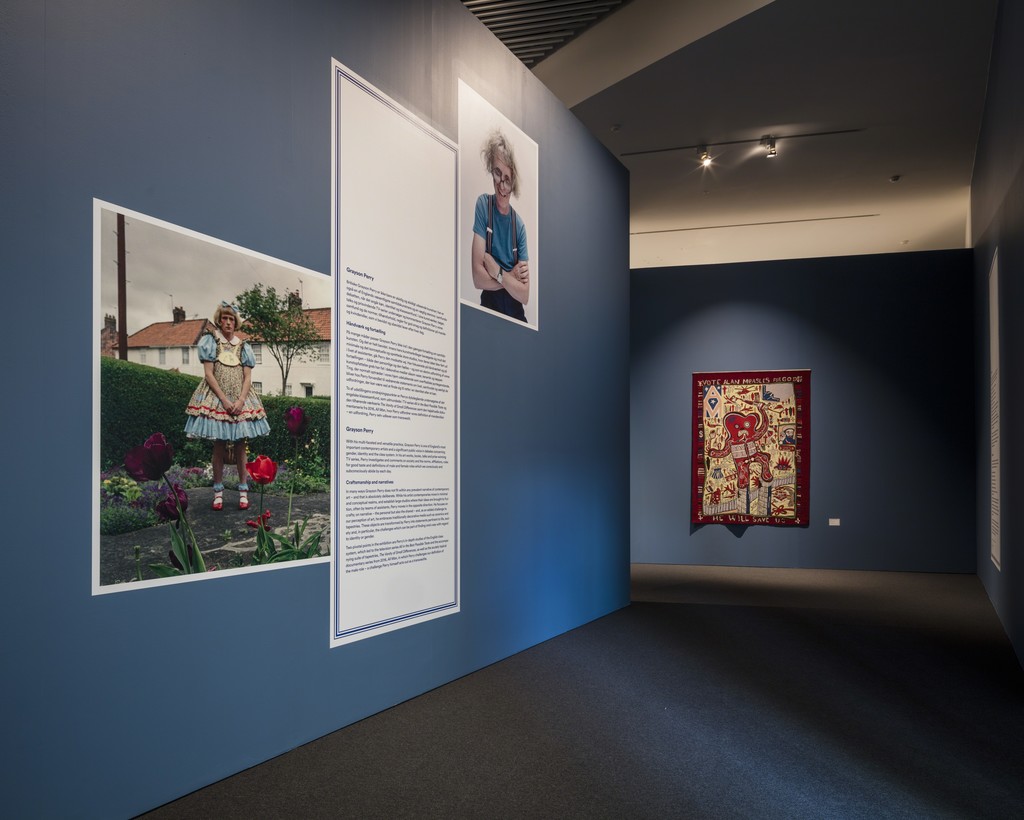 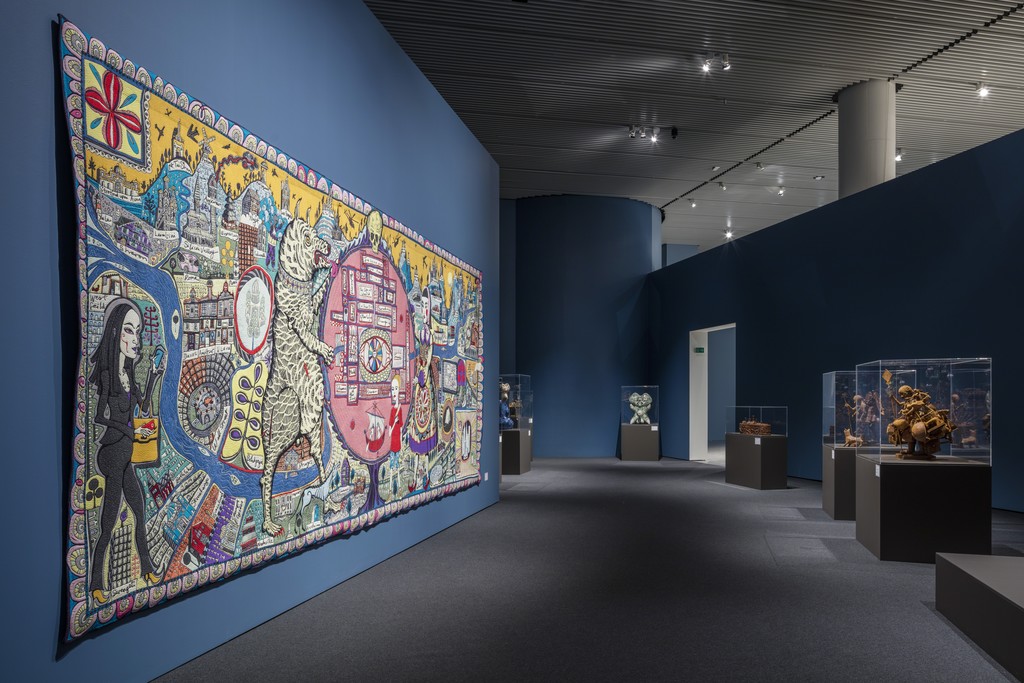 Grayson Perry is one of Britain’s greatest artists. He is loved for his personality and appreciated for his art. In this, his first major solo exhibition in Denmark, his works can now be viewed at ARoS Aarhus Art Museum.

Strong forces are let loose when ARoS opens its doors for the exhibition Hold Your Beliefs Lightly by British Grayson Perry (b. 1960). The works include a 15-metre-long and 3-metre-wide tapestry, a very peculiar motorbike and six completely new works inspired by Perry’s most recent TV series All Man. The works relate stories of everyday life – stories of identity, gender and class.

‘Grayson Perry’s artistic universe is engaging and fascinating because of his projects’ huge success in stimulating interest in art among the general public. His stories concern and affect us all, thus making the exhibition particularly relevant. We are extremely proud of the fact that he will be exhibiting at ARoS throughout the summer,’ says museum director Erlend G. Høyersten, ARoS.

Grayson Perry (b. 1960) was born in Chelmsford, England, and trained as an artist at Portsmouth Polytechnic. In 2003 he won the prestigious British Turner Prize. He lives and works in London.

Perry is known mainly for his ceramic vases and tapestries, but he also writes books, makes TV-series, gives lectures and is a very popular debater. He tells stories of people’s everyday lives, focusing on class divisions and the identity issues and conflicts that ensue. His artworks are crammed with sharp and witty symbols that query modern life, our habits and values.

At first glance Perry’s pots look like traditional pottery, but a closer look reveals provocative statements, themes from gossip magazines as well as scabrous images. The tapestries are modern-day tales collected by the artist on his research trips in connection with the making of a series of award-winning TV-programmes.

The teddy bear Alan Measles plays a significant and recurring role in Grayson Perry’s works. According to Perry himself it represents the masculine element in his life. Perry is also known as a cross-dresser and often appears as Claire, his female alter ego. His colourful behaviour and numerous lectures, publications and TV-appearances have gained him celebrity status in Britain.

THE SHOWING OF PERRY’S TV-SERIES

Apart from artworks such as tapestries and ceramics, ARoS will also show the BAFTA award-winning television series All in the Best Possible Taste investigating good taste and identity in three different social classes. The series will also be shown on Danish television during the exhibition period. The series All Man will be shown on certain days at ARoS. Both television series have inspired a number of artworks that can be experienced in the exhibition. The works, which have been created in connection with All Man, have never been displayed before.