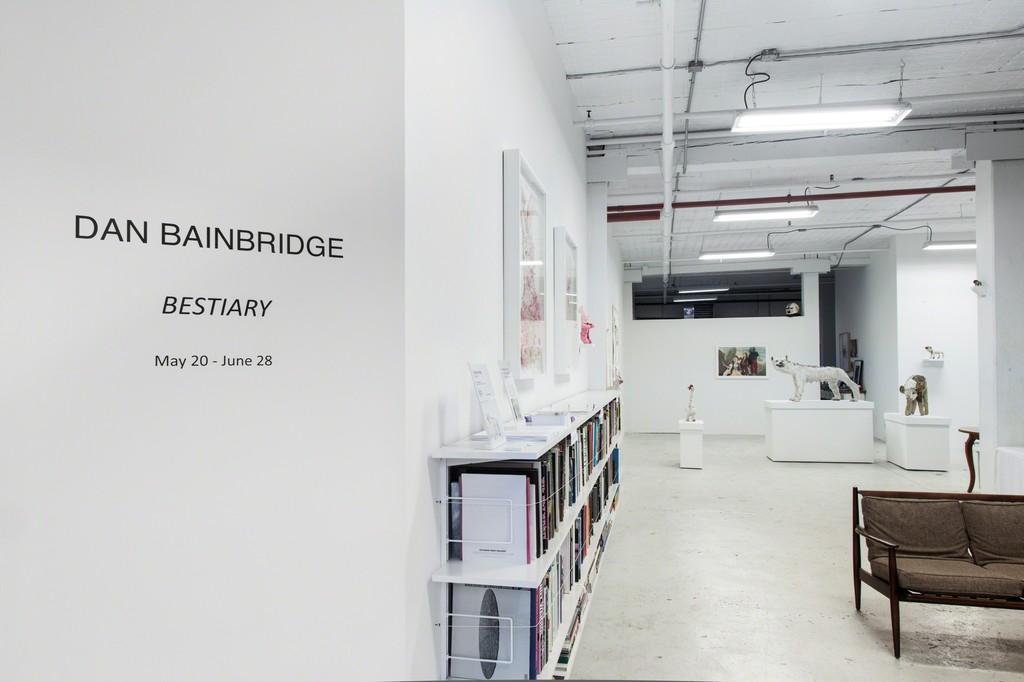 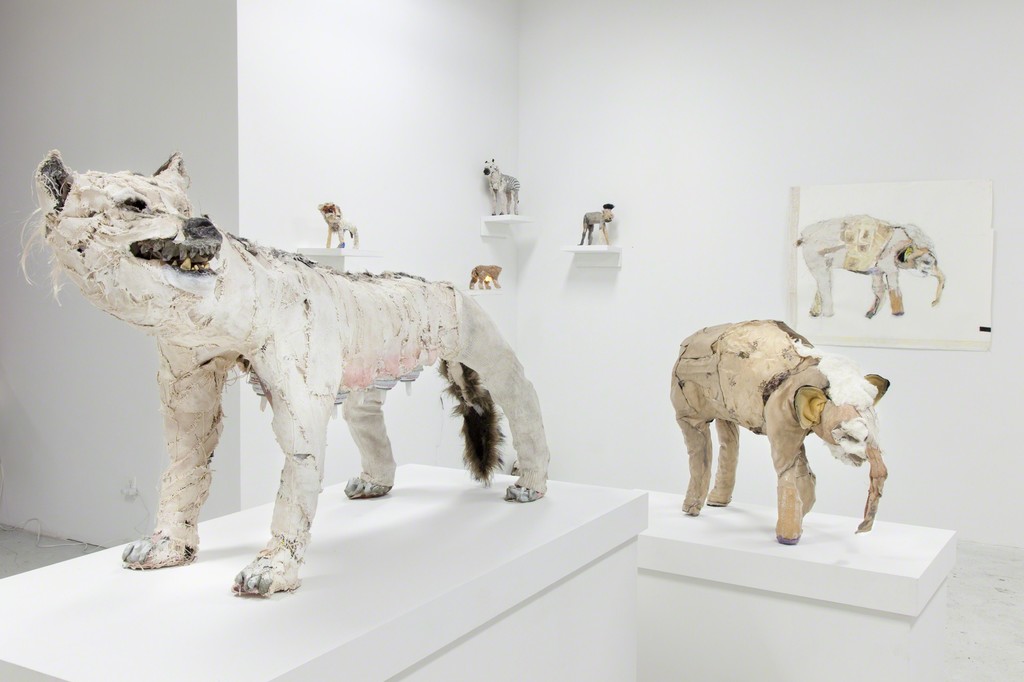 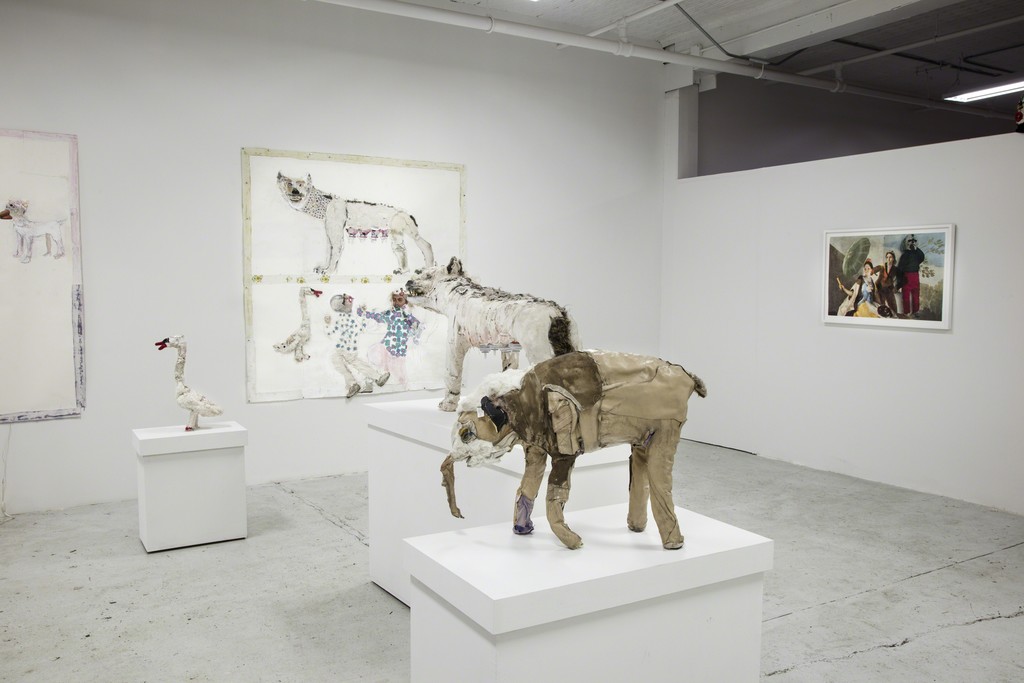 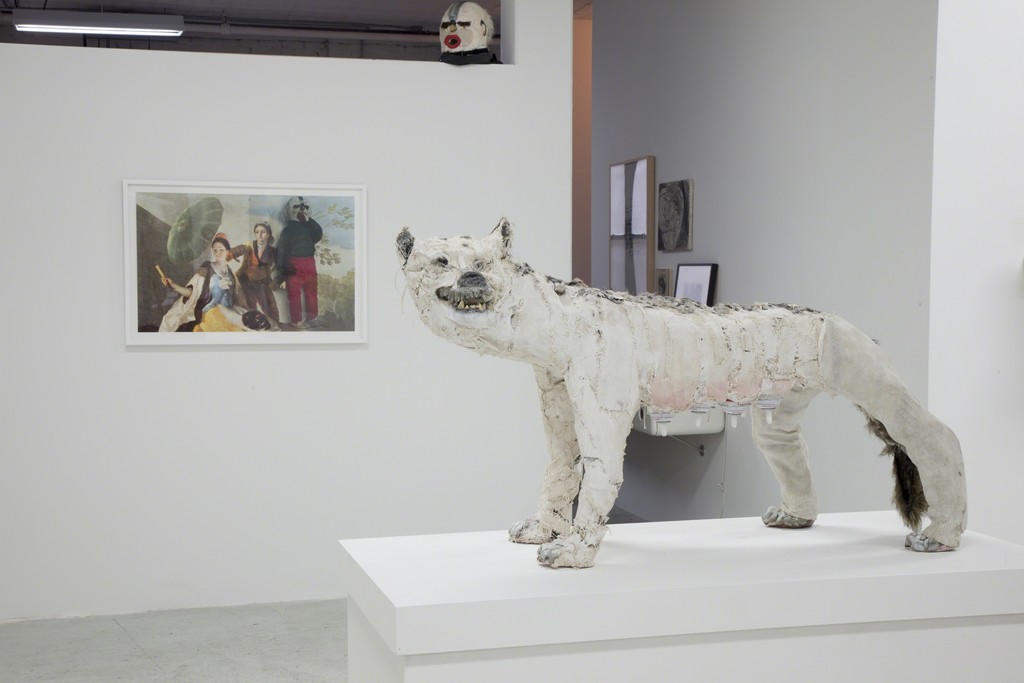 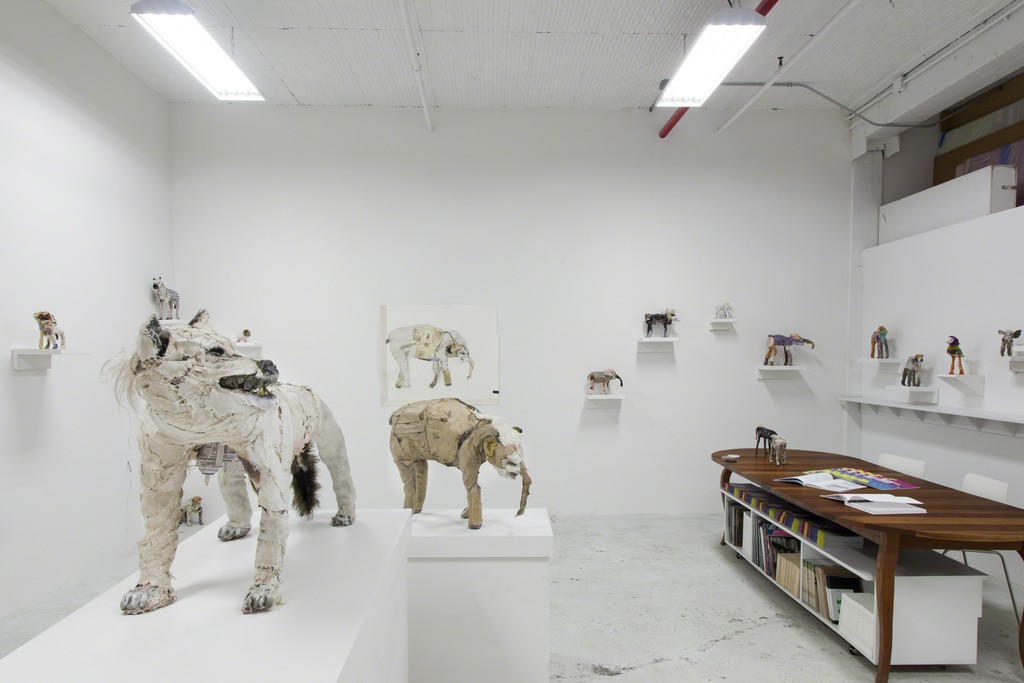 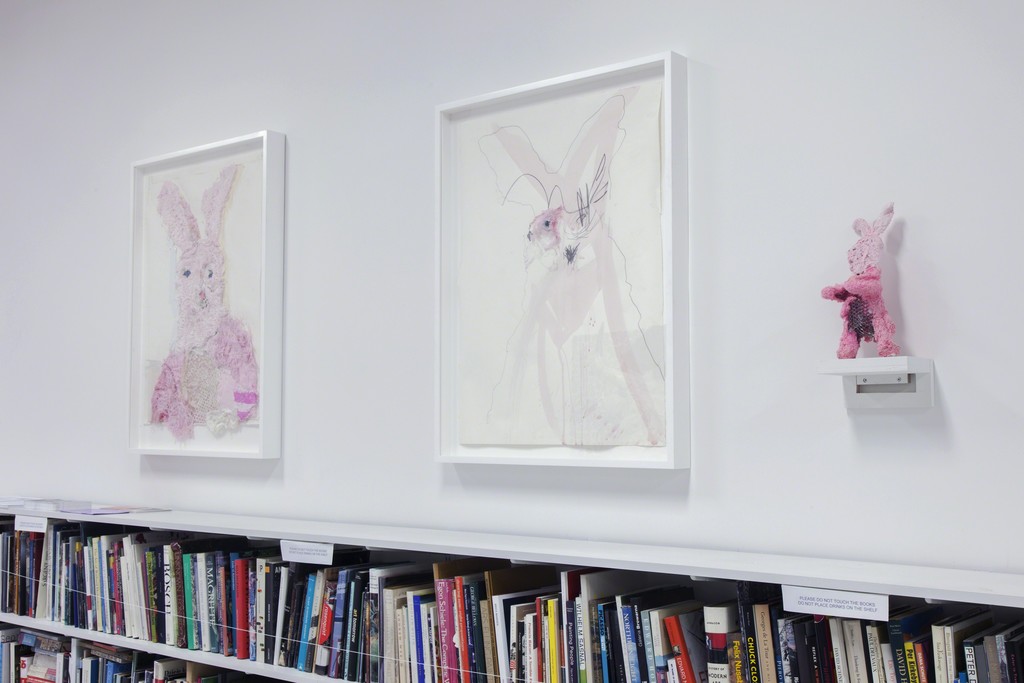 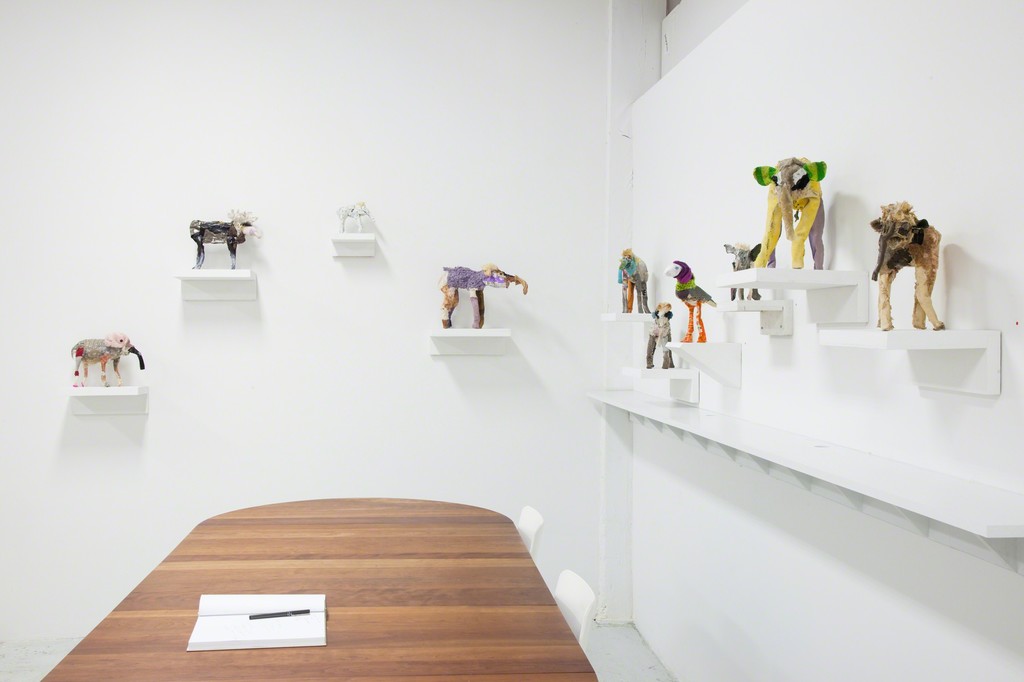 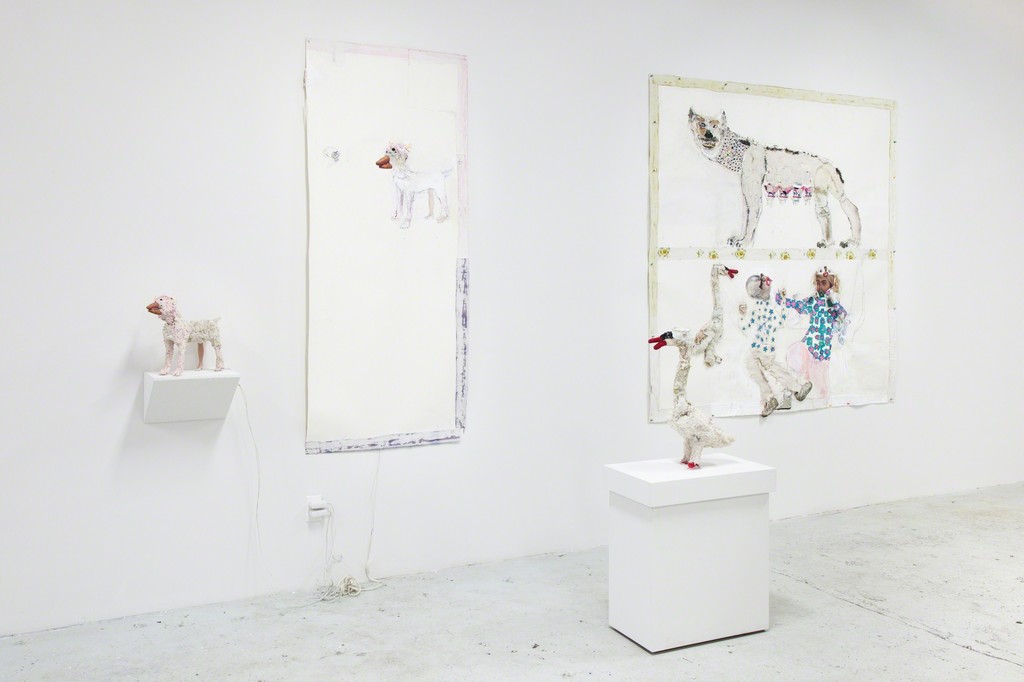 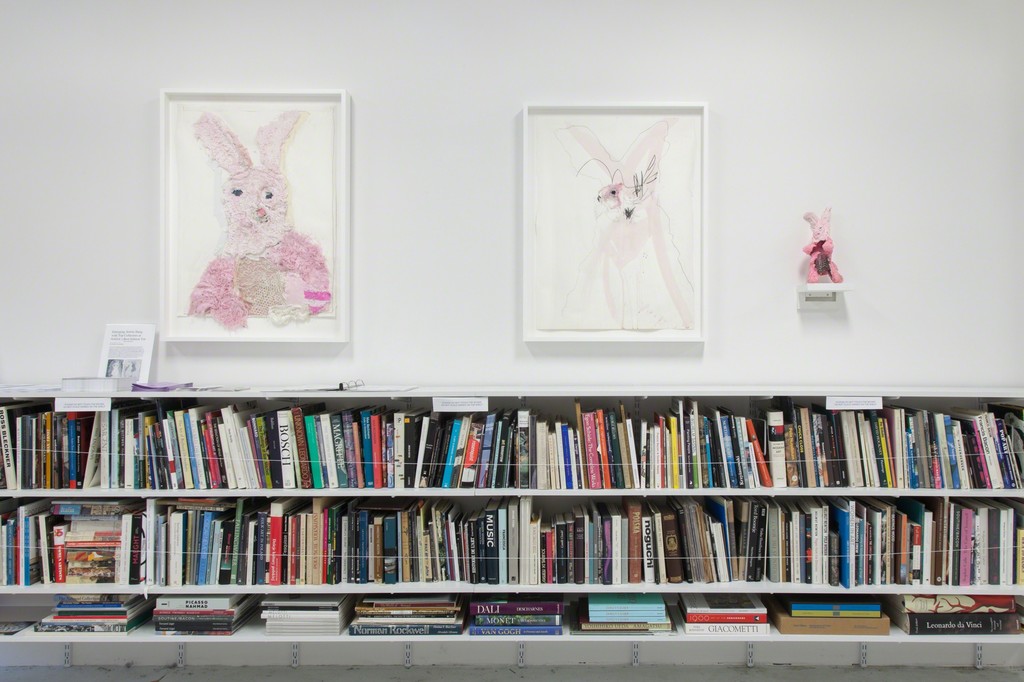 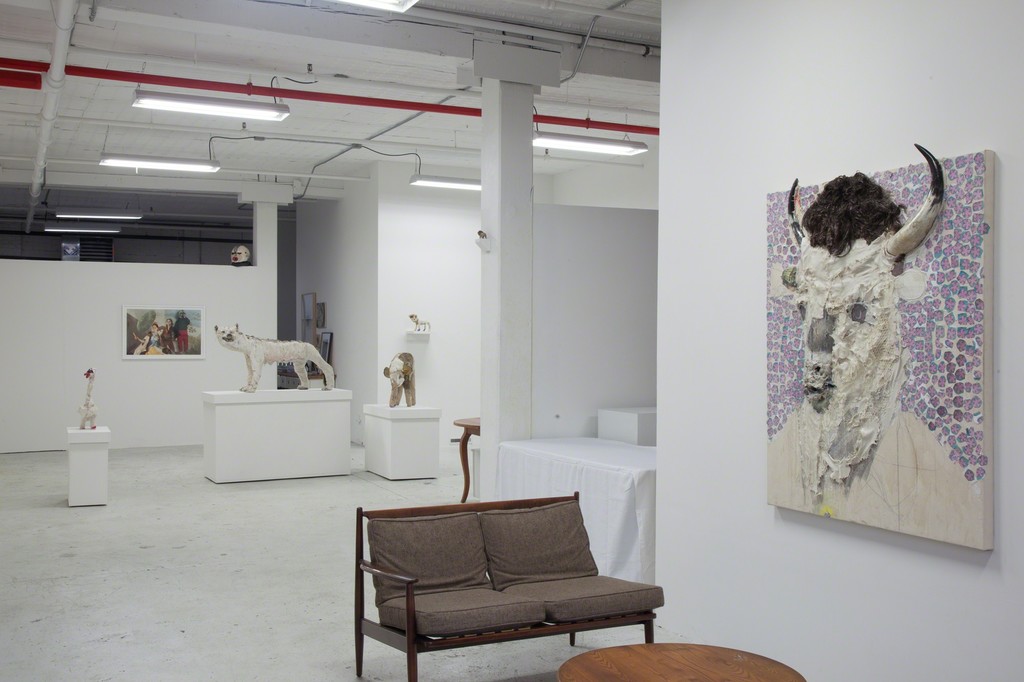 Brooklyn, NY, May 6, 2015 – ART 3 is proud to present the first NYC solo exhibition of DAN BAINBRIDGE, BESTIARY. On view at ART 3 gallery, 109 Ingraham Street, Bushwick, Brooklyn, from May 20 to June 28, 2015, Wed-Sat 12-6, Sun 1-6. The opening will take place on Wednesday, May 20, from 6-9 PM. The exhibition will be on view during Bushwick Open Studios (Fri-Sun, June 5-7) hours are 12-8 PM. On Saturday, June 13, 6-7 PM, we invite you to a live performance by Dan Bainbridge. The performance will start at 6:30 sharp.
To create mixed-media objects, assemblages, collages, and performances, Dan Bainbridge draws from nature, history of representation, Western mythology, childhood, adult fantasies, and popular culture. Captivated by the interrelation between vulnerability and cruelty, this highly original emerging talent has created a contemporary bestiary.
Bainbridge’s menagerie – animal figures derived from nature, recreations of mythical creatures, or entirely novel monsters – remind us of medieval compendia of animals’ symbolic meanings that made no distinction between animals native to Europe, exotic species, and imaginary beings. In them, dragons, unicorns, basilisks and griffins were depicted among deer, lions and elephants. In Bainbridge’s studio, next to Lyuba (2014), a stunningly rendered re-creation of a 42,000 years old mummy of a baby mammoth, we find a mythical Unicorn (2013), a stuffed pink pony with a glowing crystal garishly sticking out from its forehead, and Doberman Pincher (2014), a pinkish dog with a beak-like muzzle made of human prosthetic fingers and a humanoid leg taken from a doll.
A healthy dose of grotesque pushes the issue of materiality and its infinitely transformative potential to the extreme in Bainbridge’s droll transmutations of zoo-morphological creatures. In the artist’s take-off on the founding myth of the ancient city of Rome and its most famous representation in art, She Wolf Reading Light (2013) has glowing crystals for teats, while She-Wolf sculpture (2014), has teats made of whipped cream canisters, which during the artist’s performance in 2014 were used to dispense whipped cream for audience consumption.
What amazes the viewer is the mimetic perfection: the artist’s ability to render his creatures true. A signature example is Lyuba: Bainbridge’s unsettling recreation of the mummified specimen that he seemingly brings it back to life in a way that is both grotesque and tender. His most recent works – assemblages – in addition to the multitude of materials used and Bainbridge’s exceptional ease in portraying natural and imaginary features of animals – also display his exquisite compositional skills. Immediately confident in working on a large scale, he introduces an animal with great symbolic power in American culture – the bison (Paco, 2015). Treated as in classical portraiture, it evokes Picasso’s Minotaur – a mythical creature the Spanish artist identified with.
The essence of Dan Bainbridge’s practice is alteration. As soon as the artist departs from nature, he populates the world with creations of his fantasy. Artists before him made their own bestiaries, among them Leonardo da Vinci, Henri de Toulouse-Lautrec or Saul Steinberg, not to mention creators of fantasy computer games. Yet, for all their whimsy and absurdity, there is something deeply unsettling about Bainbridge’s inscrutable creatures. Grotesque and repulsive, but at the same time seemingly vulnerable, they are a representation of the world that exists and does not exist at the same time, bearers of inexplicable longings and fears. We sense lurking evil, covert eroticism, and latent cruelty. Is Bainbridge exploring the tension between gentleness and aggression? Does his interest lie purely in distortion or,

rather, in human capability to perceive nature as good or evil, possessed of beauty or ugliness? Or is it human nature itself, capable of innocence, perversity and inner conflict? The hybrid and ominous character of Dan Bainbridge’s works, as well as the connection he makes between toys and exploitation, situate his work close to the tradition of a critique of American society by such artists as Mike Kelley or Paul McCarthy.
Dan Bainbridge’s practice goes beyond creating objects: his performances are based on improvisation and collaboration with other artists, usually employing music, stuffed animals, or a costume-persona of Monkey Mop Boy. Prominent in his performances since 2009, this figure of exploitation, inspired by a documentary film about street children in Romania, straddles the murky ground between innocence and evil. Possibly the artist’s alter ego, he insinuates himself into other works, for example, Bainbridge’s take-off on Goya’s The Parasol (c. 1777): Goya with Monkey Mop Boy (2014), or She-Wolf and Swan with Romulus and Remus (2015), where, with his wide open mouth, he supplants one of the twins reaching toward painted whipped cream canisters.

DAN BAINBRIDGE, American b. 1976 in Dubuque, Iowa, lives and works in Brooklyn, NY. He had two solo shows at the University Galleries and participated in numerous group exhibitions at the Illinois State University in Normal, IL, where he graduated with MFA in Studio Art (2006). He makes mixed-media objects, assemblages, and collages, and is active as a performance artist; he co-founded collectives Monkey Mop Boy and French Neon (an artist collective, a salon, and nomadic gallery). Dan Bainbridge’s works have been featured in many group shows in New York since he moved to the city in 2006, including The Librarians at the Queens College Art Center (2013) and in Pyramid Scheme curated by Nat Ward in Brooklyn (2014). This is his first solo exhibition in New York.
ABOUT ART 3
ART 3 opened in Bushwick in May 2014 near Luhring Augustine, created by Silas Shabelewska, formerly of Haunch of Venison and Helly Nahmad Gallery in partnership with Monika Fabijanska, former Director of the Polish Cultural Institute in New York.
Detailed information: art-3gallery.com and ARTSY
Please contact ART 3 [email protected] for inquiries, images and interview requests