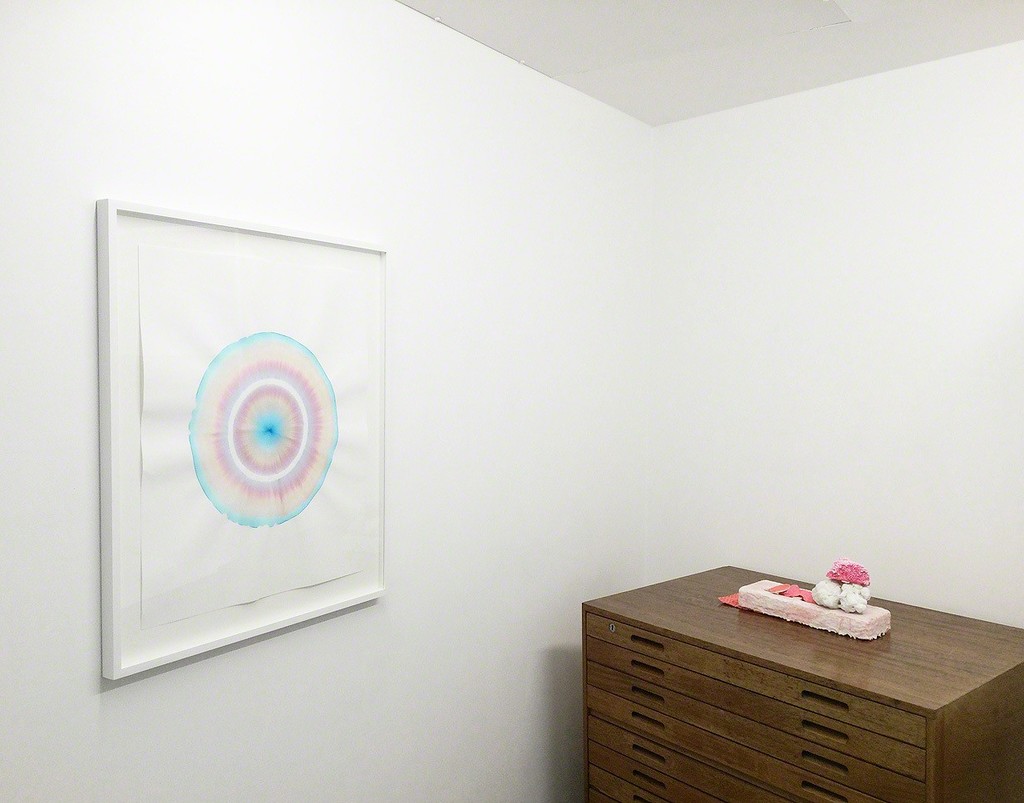 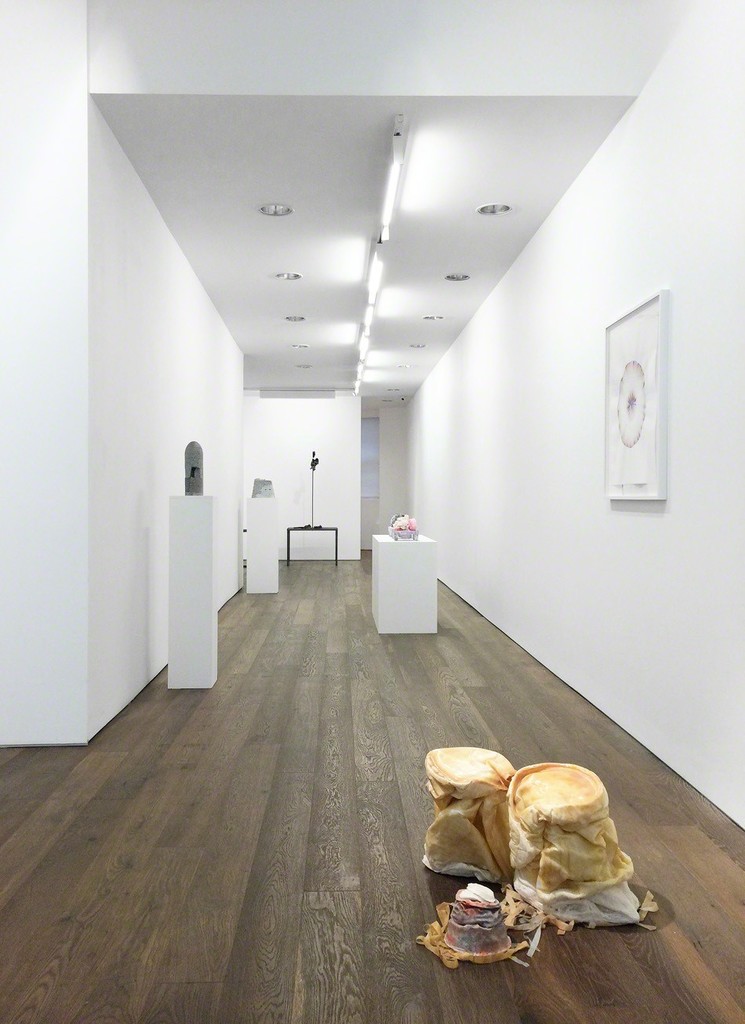 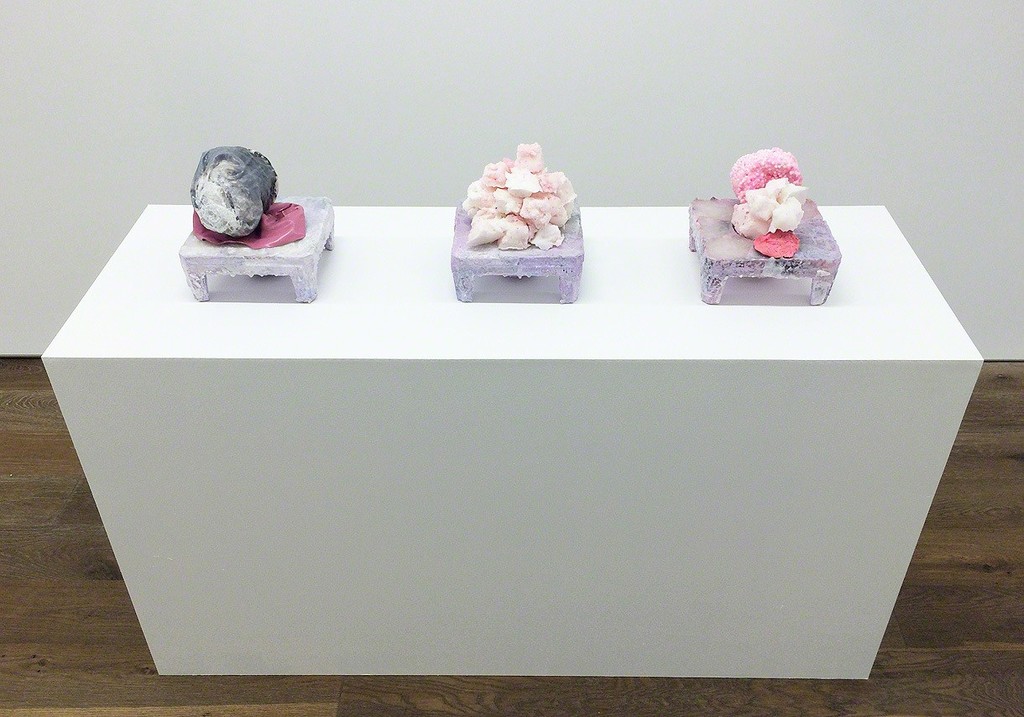 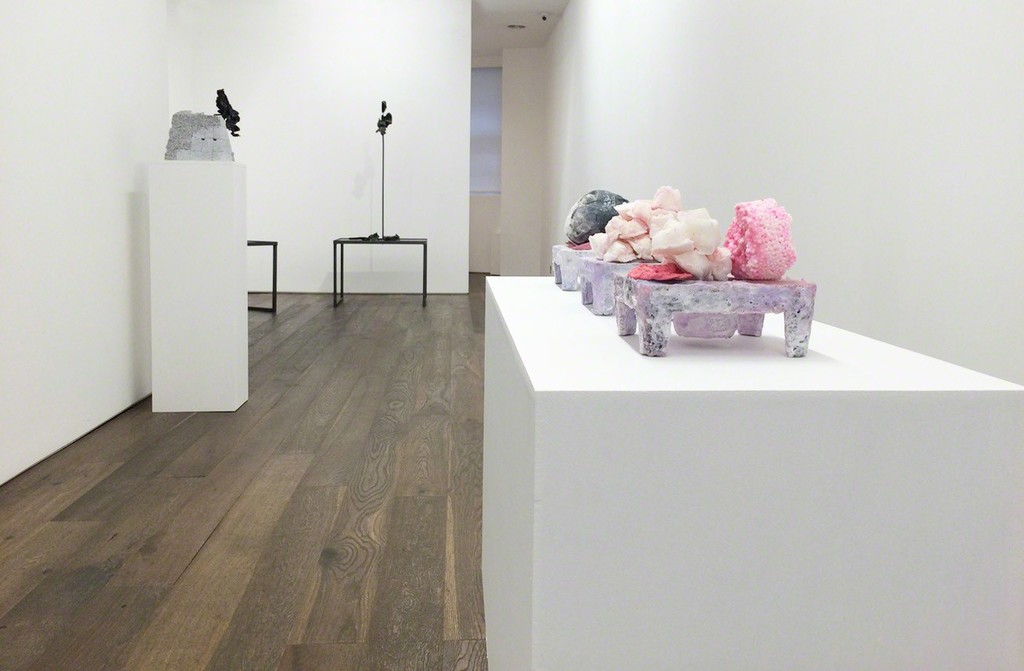 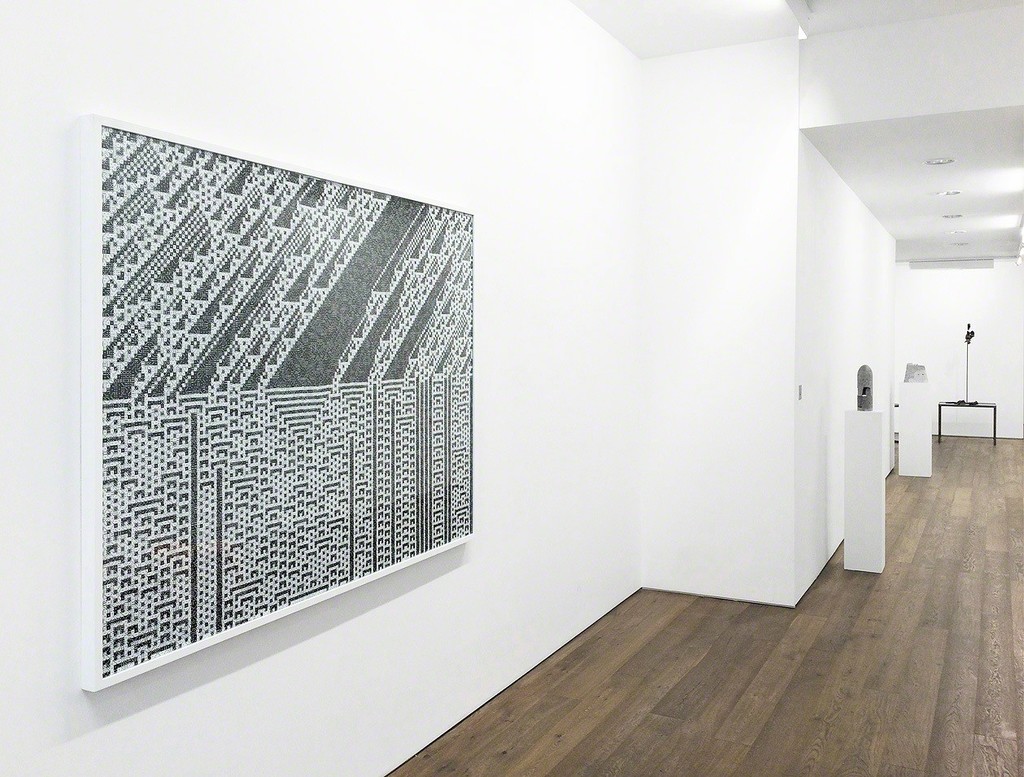 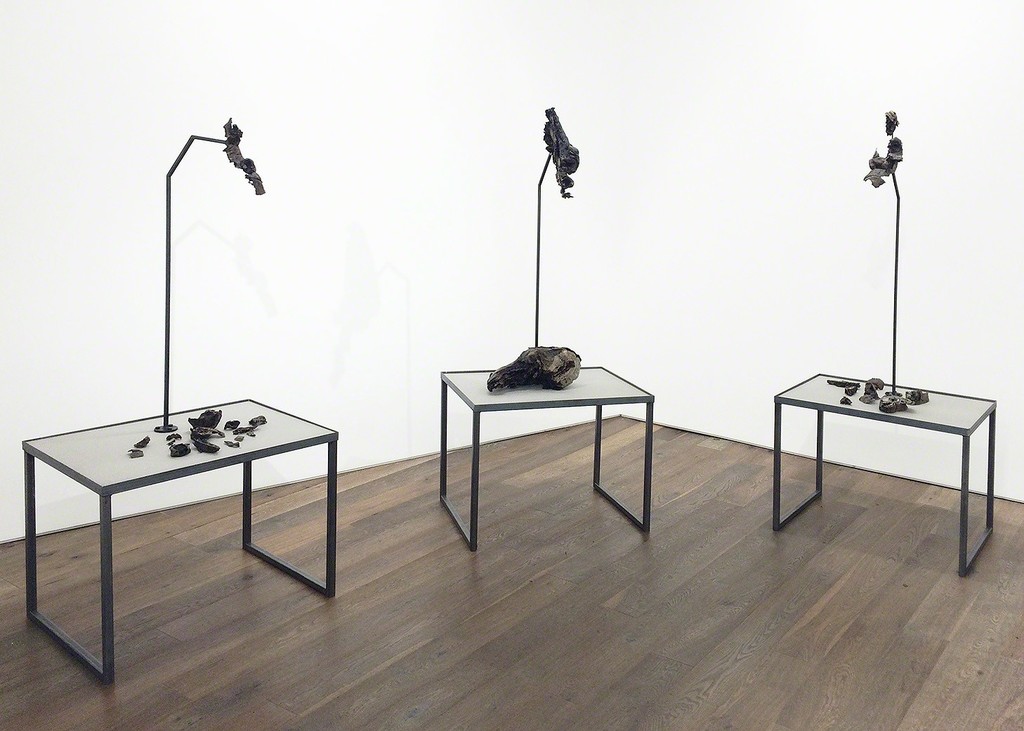 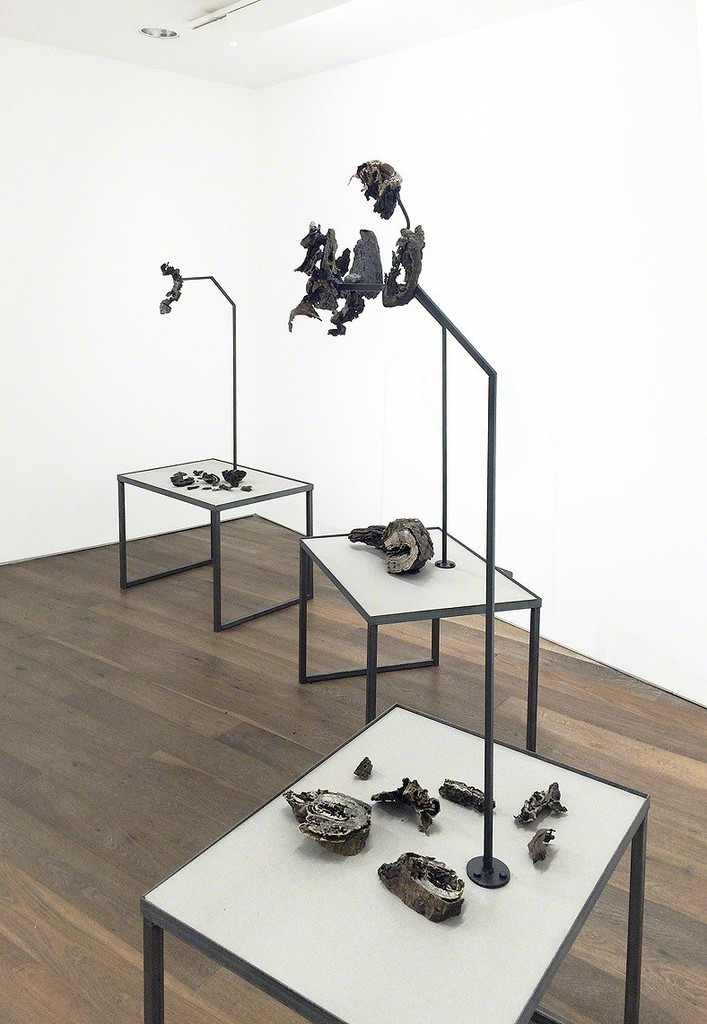 The group exhibition Finding Form centres on notions of chance and of 'letting go' within the creative process. In the works selected there is a certain aspect of either introducing or submitting to an element of the unknown. The title refers to this quality within each artist's practice - where the resultant work is as much discovered as determined.

In the case of works by Okamoto and the artists’ collective ‘Troika’ this manifests itself in deliberate acts, with a clear line drawn at which point the process of creation is turned over to fate.

With Okamoto's Volume of Lives and Faraway Mountain pieces the works are created as immaculate granite sculptural objects, carefully and obsessively carved and smoothed. The letting go begins with the employment of the traditional 'wari modoshi' stone splitting method, which produces wavering un-even fractures through the stone, and then culminates in Okamoto releasing each broken piece of the whole to 'live' with willing hosts for 5 years. After their period of travel / adoption the small pieces are returned and reassembled into the whole. Some remain immaculate, others are chipped or discoloured, a few never return at all.

In Troika’s Calculating the Universe the action decided upon, that allows the creative process out of the makers hands, is the introduction of an algorithm, which determines the outcome of the work. The intervention of 'chance' here is somewhat illusory, as the algorithm acts on its subjected material (thousands of neatly assembled black and white dice) not in an arbitrary way but with perfect mathematical certainty. The element of the unknown for the creators here lies in the lack of control over the resulting pattern that ensues – sometimes chaotic, sometimes neatly resolved and continuing in orderly fashion into infinity.

Drawing Together, Drawing Apart, the other series by Troika presented in the exhibition, examines how the same gesture can provoke opposing effects. By painting water continuously in between two concentric circles of ink the two rings assume an inward and outward directionality. Even if united by the same cause, the edge of the drawing bleeds out in a sort of colourful membrane while its nucleus converges in a darker central blot. This series draws on Troika’s interest in the generative potential of control and explores the paradoxical fact that, while forcing in the same instance an element of constraint and release, the result is as unpredictable as it is harmonious.

The line of determination between maintenance and relinquishing of control is less clearly defined in the work of Evelyn O'Connor and Douglas White. Rather than imposing a series of firm decisions - effectively creating a system - upon their work, they are more continually and intuitively led by the properties and peculiarities of their medium. In O’Connor’s case this results in a practice that is very much about allowing her works to create/define themselves after she has prepared the ground for them – in a way it would be as well to describe her ‘medium’ as her ‘ingredients’.

Douglas White also works intuitively with his chosen materials, though in a more conscious way. He permits the stubborn boundaries of his source material to remain, and even to guide his hand, but also extracts and imposes new qualities into the end form – creating evocative sculptural works that play on our anthropomorphising instincts. The works in this exhibition, such as Gorilla, emerge as the result of an ongoing interaction with a very particular material – the dried skin and desiccated remains of the Opuntia cactus, harvested from the island of Gozo. The existing intricate forms and patina of the skin itself, preserved and accentuated with wax, dictate and create, as much as depict, the resulting form.

Notes on the artists:

Evelyn O’Connor (b. 1988, Ireland) is a graduate of the Limerick School of Art (2010) and Royal Academy Schools (2015). She has exhibited previously in Ireland and the UK, and was the winner of the Maccabeans Prize (Royal Academy, 2014) and the 2015 Red Mansion Art Prize.

Atsuo Okamoto (b. 1951, Hiroshima, Japan) trained at the Tama Art University, Tokyo and currently lectures in sculpture at the School of Art and Design at Joshibi University, Sagamihara. Okamoto has exhibited extensively throughout Japan, and, in the UK, collaborated on major public sculptural works at the 2009 Edinburgh International, and with the project ‘STONE’ at Yorkshire Sculpture Park (2010 & touring).

Troika - Eva Rucki (b. 1976, Germany), Conny Freyer (b. 1976, Germany) and Sebastien Noel (b. 1977, France) have worked together as an artist trio, based in London, since 2003. Their work is part of the permanent collections of the Victoria & Albert Museum London, The Art Institute of Chicago, MoMA New York and the Israel Museum. In 2014 Troika was selected to present their work ‘Dark Matter’ at Unlimited, Art Basel, and in 2014/15 have exhibited work at NC Arte (Bogota) the Daelim Museum (Seoul), the Lehmbruck Museum & Kunstmuseum Wolfburg (Germany), the Drawing Room & Courtauld Gallery (London), the Taipei Fine Arts Museum (Taiwan) and the Garage Center for Contemporary Culture (Moscow).

Douglas White (b. 1977 Guildford, UK), graduated from the Ruskin School of Art (2000) and Royal College of Art (2005), and has exhibited throughout the UK, Europe, the US and South America. His work is in the collections of the David Roberts Art Foundation, Saatchi Collection, Frank Cohen and Cass Sculpture Foundation. In 2014/15 he has completed site-specific sculptural commissions in France and Brazil. His work was included in the inaugural exhibition at the new Dairy Art Centre (London).