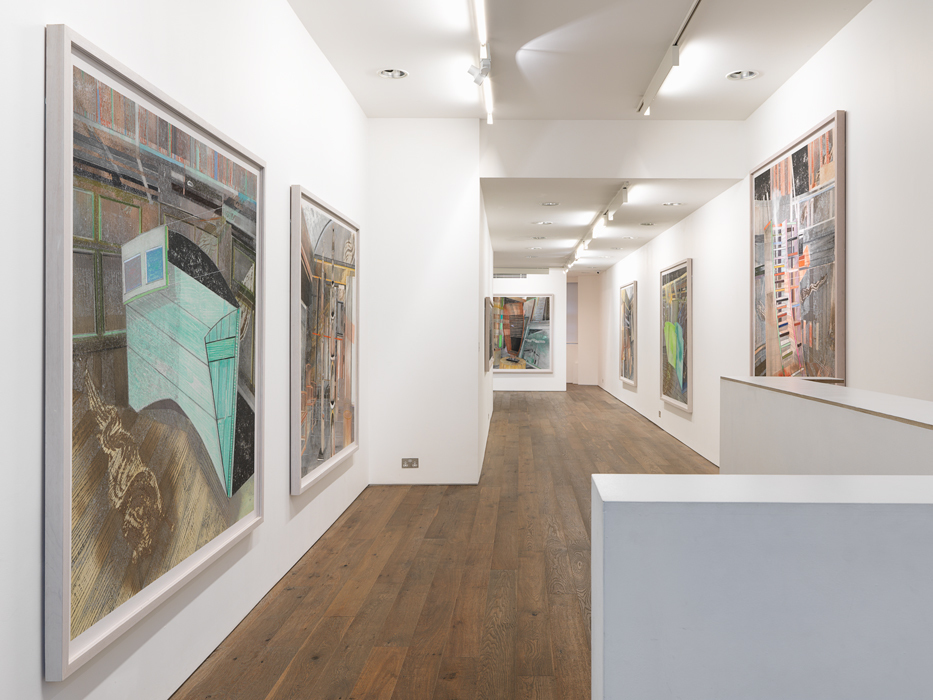 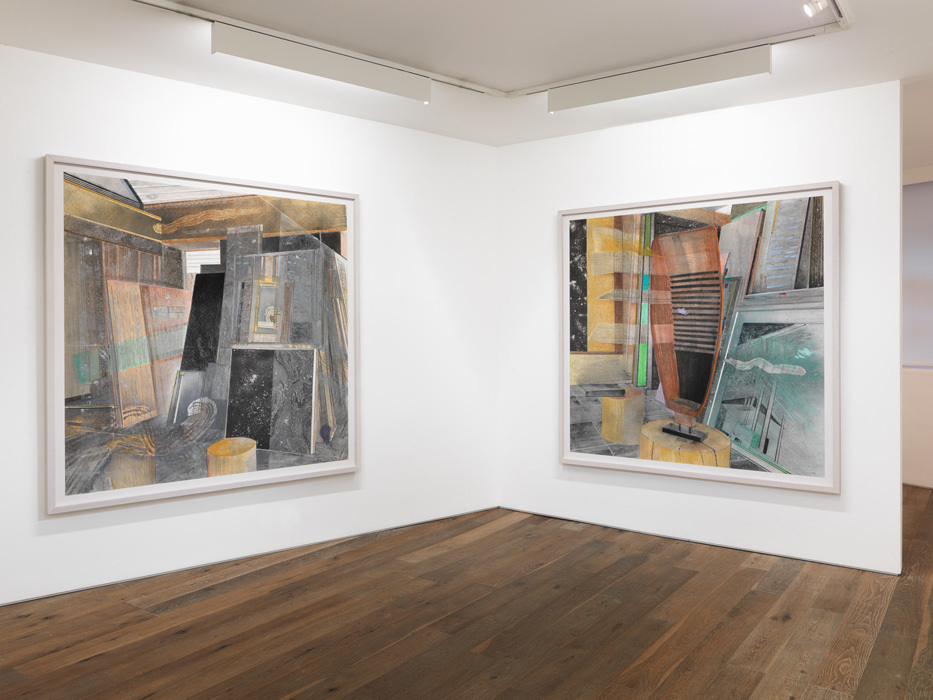 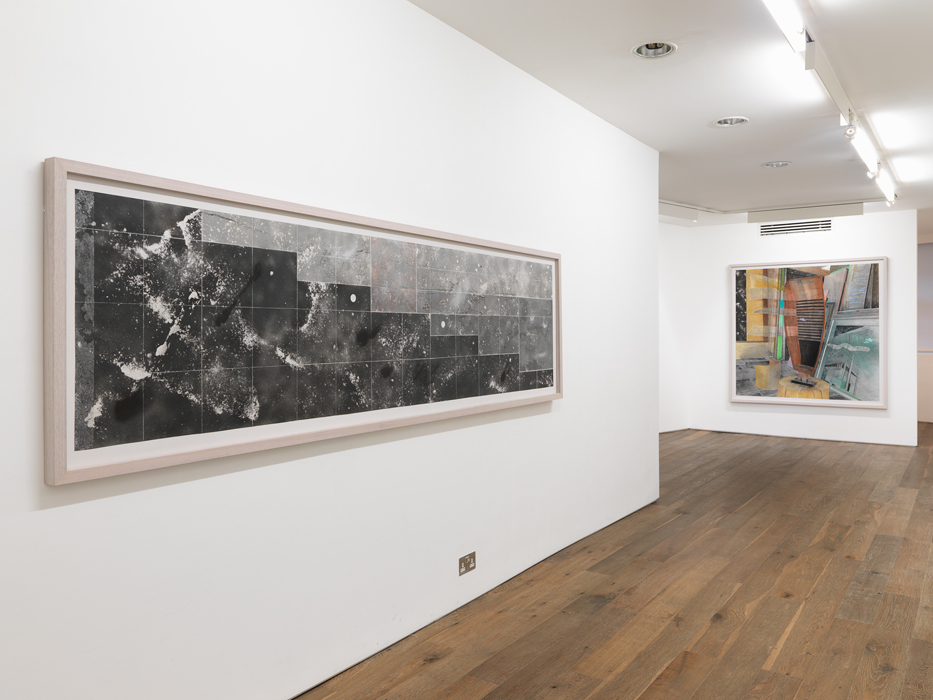 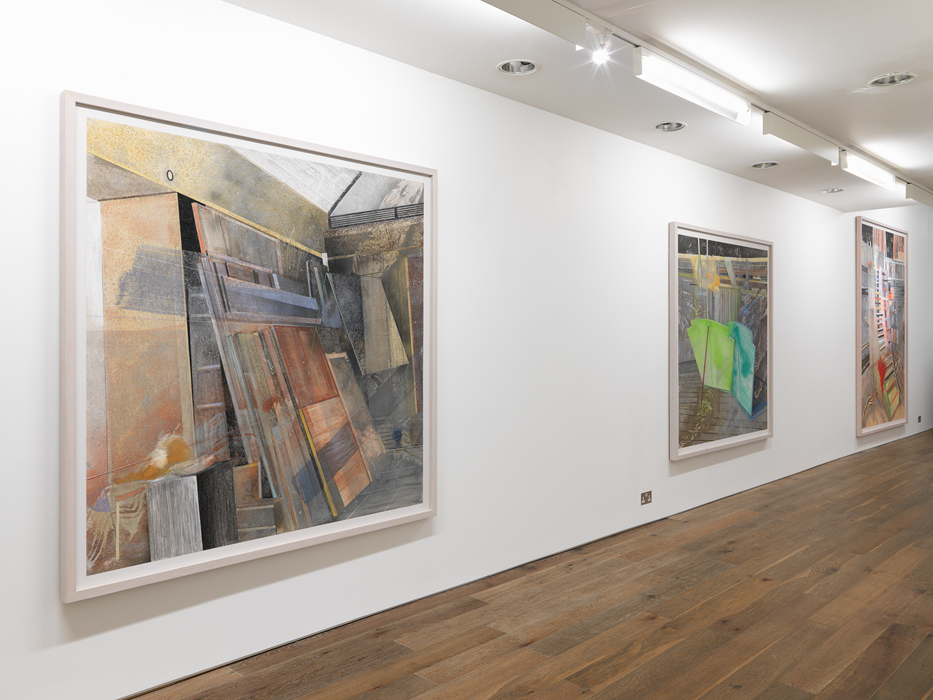 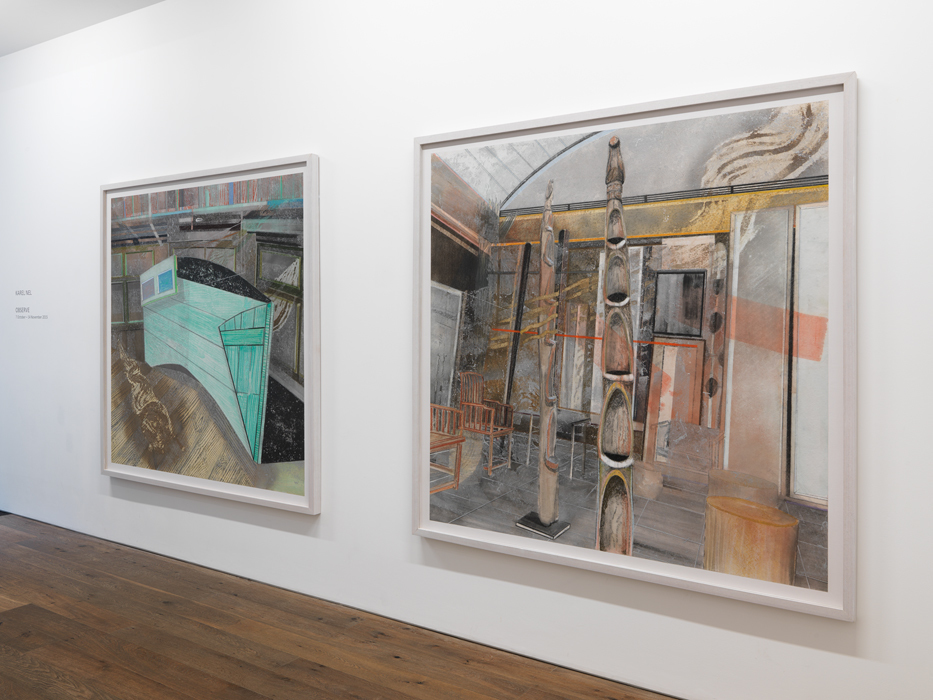 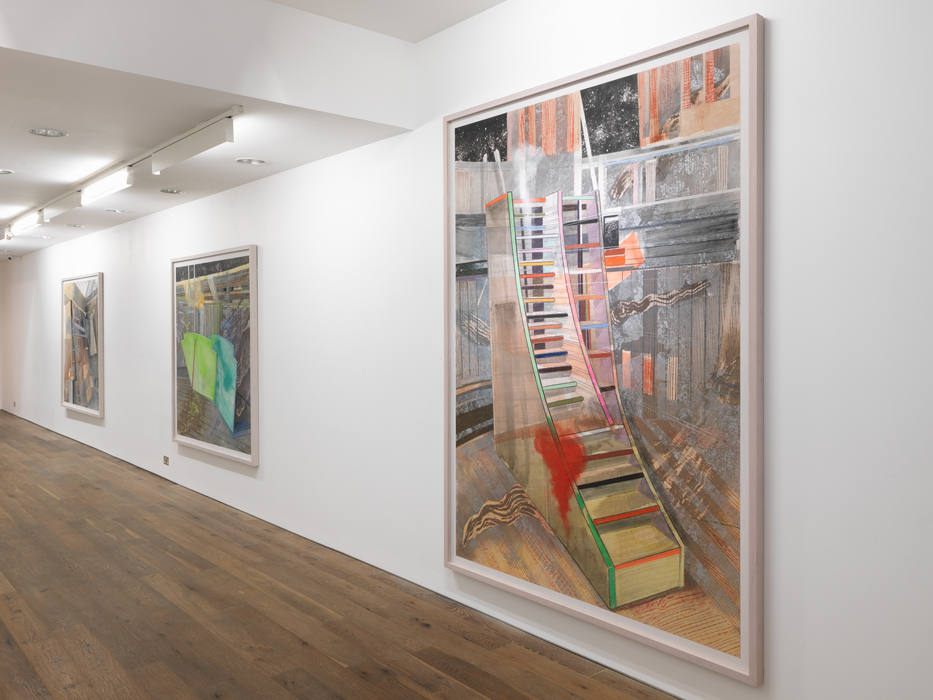 The brevity and the almost declamatory tone of Karel Nel’s title for his exhibition anticipates the response: silent observation. It is the sort of silence we share when we bend our heads backwards to look up in wonder at the stars or the moon whenever we are in a place far enough away from light polluted cities to see what he calls ‘the brilliance of darkness’.

What we see in front of us on the walls however, is a complex set of magnificent drawings which partly describe two different interior spaces. The familiar space is that of his studio, which is also his home and which houses his extensive collection of Southern African, Oceanic and Asian artefacts. Some of these objects make an appearance in the drawings themselves; they play the part of accompanying presences, moving freely in and out of the picture space. There are other presences too, implied, or suggested by weightless thought forms, a motif of floating transparent shapes hovering mysteriously.

The second space echoes the architectural curves of the barrel vaulted roof and end windows in his home, but it belongs instead to the circular structures of the 17th - 19th Century Observatory spaces he has visited in his role as resident artist for the COSMOS Project. Over the past 10 years Nel has attended annual conferences at which the global team of astro-physicists working on the project gather together in a nominated city to present their papers and to share their discoveries.

Helsinki’s historic Observatory designed by Carl Engel in the 1830’s is the inspiration for the new spaces to emerge here. Ascending stairways or steps lead to the observation platform from where the night skies are studied. There are sculpturally shaped trap doors, with props to keep them open, old wooden floors, and in the upper section we can glimpse the stars shimmering from the velvet black zone of a richly pigmented sky.

Only one drawing subtly fuses the two spaces. Studio as Observatory depicts stacks of rectangular works leaning against walls, but one image faces us. This is a square, referencing the Two Square Degrees of the Universe being measured by the COSMOS Project. With its vertical divide the work streams in the kind of information about galaxies familiar to scientists, yet the precisions of measure and record are far removed from anything photographic. Nel uses his customary materials – pastel, sprayed and rubbed pigment, salt crystals, carboniferous and metallic dust – to create an alchemy of night sky squared up on the studio floor.

The essential dialogue is based on a focus of observation: the studio and the observatory. When Nel is with the astronomers at remote modern observatory sites around the world he says, “I often comment to them that my studio is my observatory, far from their worlds, on the southern most tip of Africa. And then they understand the shared nature of acute observation and how it is located in place.”

Observe we do, and the longer we look across the large scaled 175 x 175 cm surfaces of these drawings the more we are drawn in to de-code the built in detail, the hidden breathing spaces, the juxtapositions, the beauteous passages and the sheer visual poetry of the silent works, packed as they are with references to a lifetime of travel, of collecting, of scientific exploration, and in the end, to a reductive vision of an eventful space. Nel’s Mudif is a studio but it is also a site of homage to the memory, the thinking and the achievements of those he most admires.

This exhibition is a mediation on the capacity to look both outwards and upwards and inwards. Once again, Nel presents a visual case for the intimacy of scientific exploration of the universe, of which we are inescapably a part, and of the internal seeking after the nature of what can be understood.

An illustrated catalogue with an essay by Elizabeth Burroughs accompanies the exhibition.

Karel Nel is Associate Professor of Fine Art at the Wits School of Arts, Wits University, Johannesburg. An account of his exhibitions, publications, and commissions covering four decades is available on the Art First website and a two volume publication on his work and his collection of Southern African, Oceanic and Asiatic artefaces is currently under way.

His works are in key museum and other public collections throughout South Africa, and he is also represented in the National Museum of African Art, Smithsonian Institution, Washington DC and in the Metropolitan Museum of Art, New York.