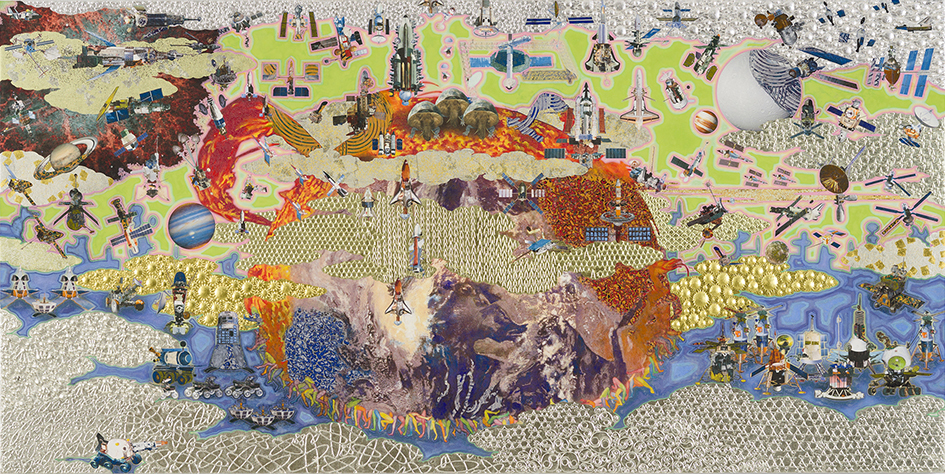 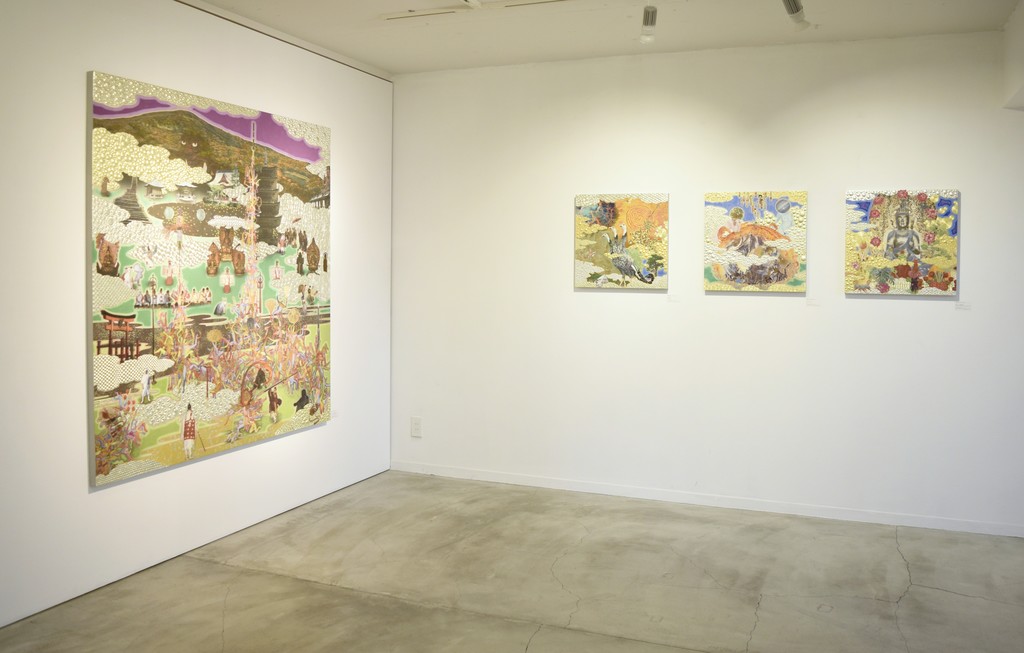 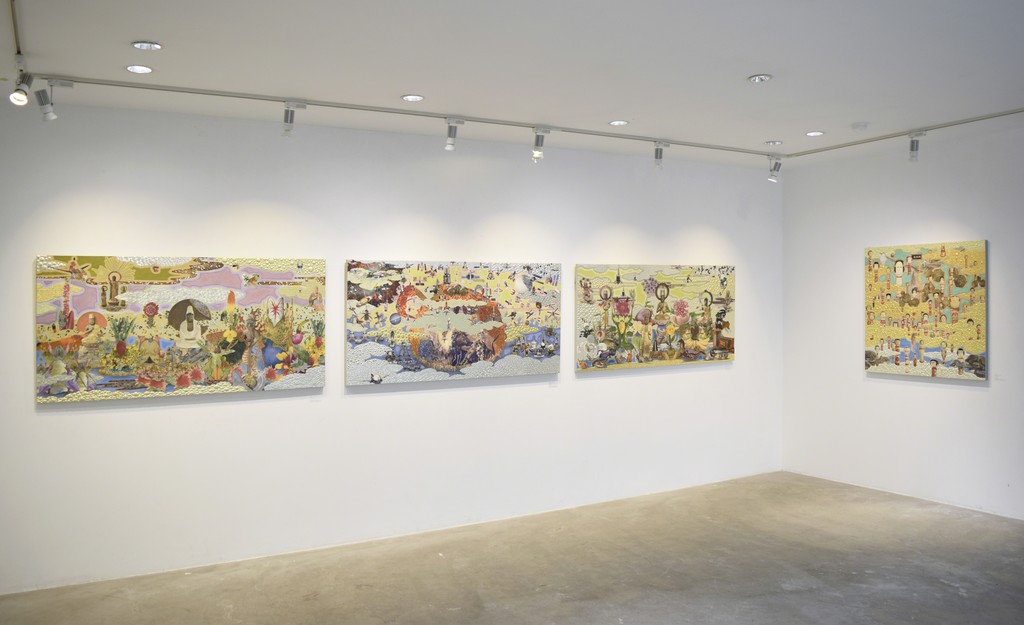 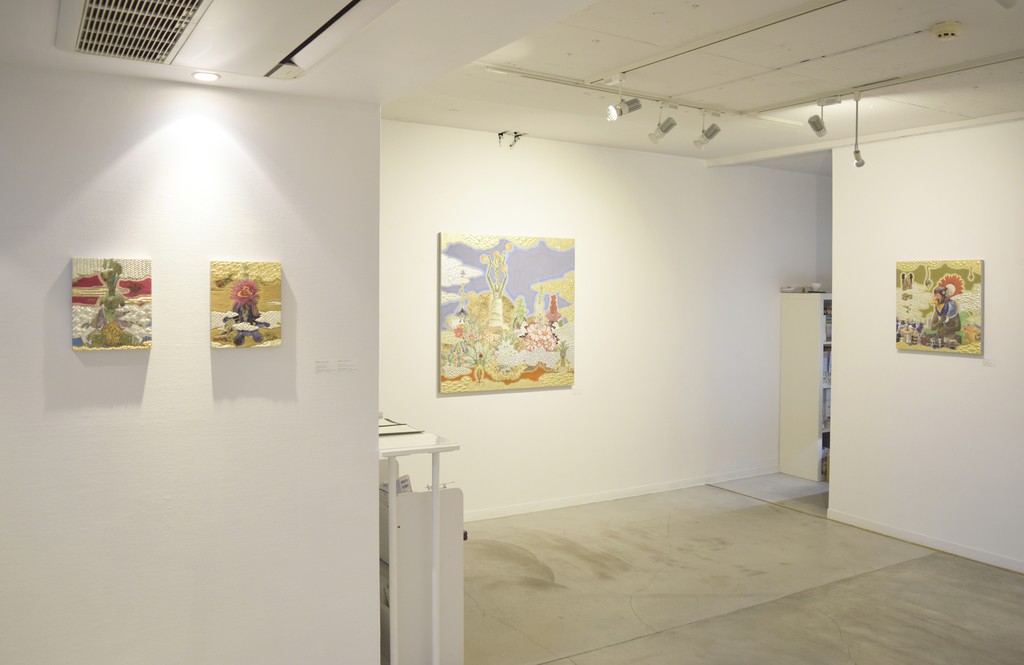 Masatake Kozaki, born in 1972 in Fukushima Prefecture, completed his PhD at Tokyo University of the Arts in 2005. He first attracted attention at the UBS Art Awards in 2000, and received the Grand Prize at the 13th Memorial of AOKI Art Exhibition in 2004. He continues his creative work as Associate Professor at Tohoku University of Art and Design, and has been expanding his range by exhibiting internationally.

Kozaki’s art takes the composition of traditional ‘Rakuchu rakugai zu (scenes in and around Kyoto)’ or ‘Nanban folding screens’, and exposes the desires of our age by using heteromorphic elements seen under the same glittering clouds. These elements such as satellites, objects from daily life, or alien forms seemingly derived from genetic modification, reveal strong influence from Hieronymus Bosch whom Kozaki encountered as an art student. His series TOUGEN (Peach-blossom Spring), takes its name from a Classical Chinese verse on paradise lost, by Tao Yuanming, harmonising that world view with the coexisting diversity of contemporary values.

Kozaki has moved on beyond rendering a world vision in bird’s-eye views, and he records the life of inhabitants within the towns, including himself. If he did not make such records, would everything disappear into oblivion? Last year, Kozaki donated a painting on the theme of his home town, Futaba, in Fukushima Prefecture, to the town itself. He depicted points of local interest, such as the vermilion murals of Kiyotosaku Oketsu Cave Tomb (a National Historic Site), a seated statue of the Eleven Headed Kannon where women pray for safe delivery, or the popular Koriyama Beach. These sites, long-standing emblems of the town’s life, hopes and amusements, are here transformed into a work of art. They remain in local memories, associated with the place, but the sites now articulate mixed feelings because the meaning of Kozaki’s hometown has been completely altered. Viewers sense his urge to convey some message as he grapples with huge, uncertain future issues, notably decommissioning the Fukushima nuclear power plant. Kozaki’s change of direction may have begun at the time of the disaster, but has now assumed impressive concrete shape.

The motifs most often depicted by Kozaki are unfamiliar or hybridised objects of human desire. He provides the frightening aspect of our contemporary world where the realisation of desires or ideals is not just a dream, but a possibility. On the other hand, some of his work depicts craft objects, such as daruma or kokeshi dolls, which directly evoke the culture of this region. Kozaki has discovered a new world by applying his established style to the origins and backgrounds of local forms, rather than making work by selecting and combining such motifs. How does he interpret the contact point between the lost, utopian world of TOUGEN and this sense of reality? And how will this connect with viewers’ realities? This solo show marks Kozaki’s first step towards meeting such challenges.