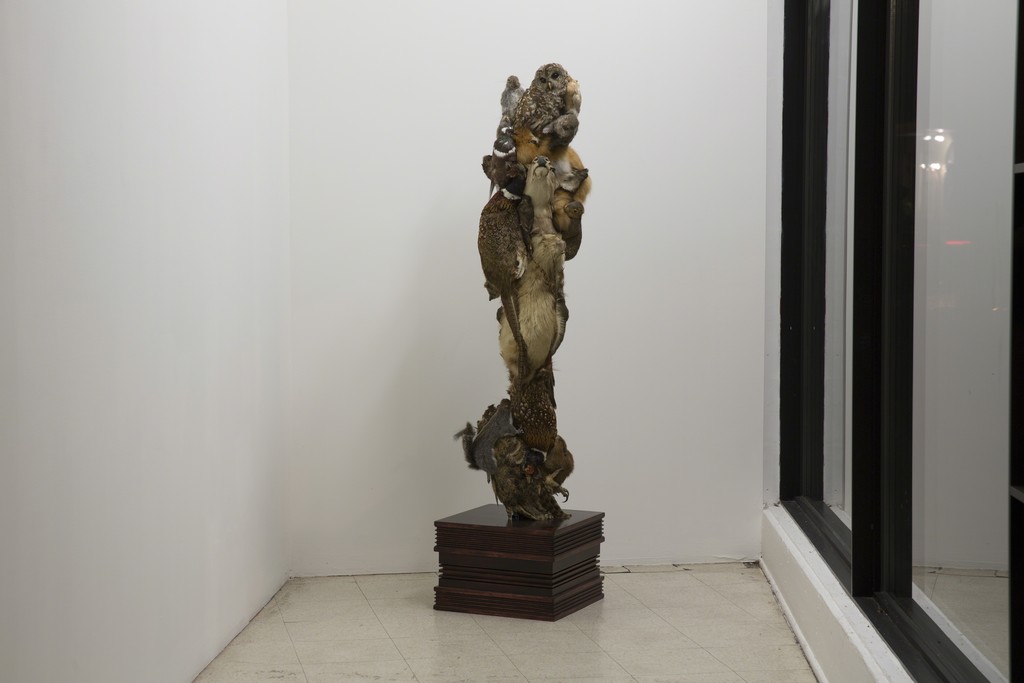 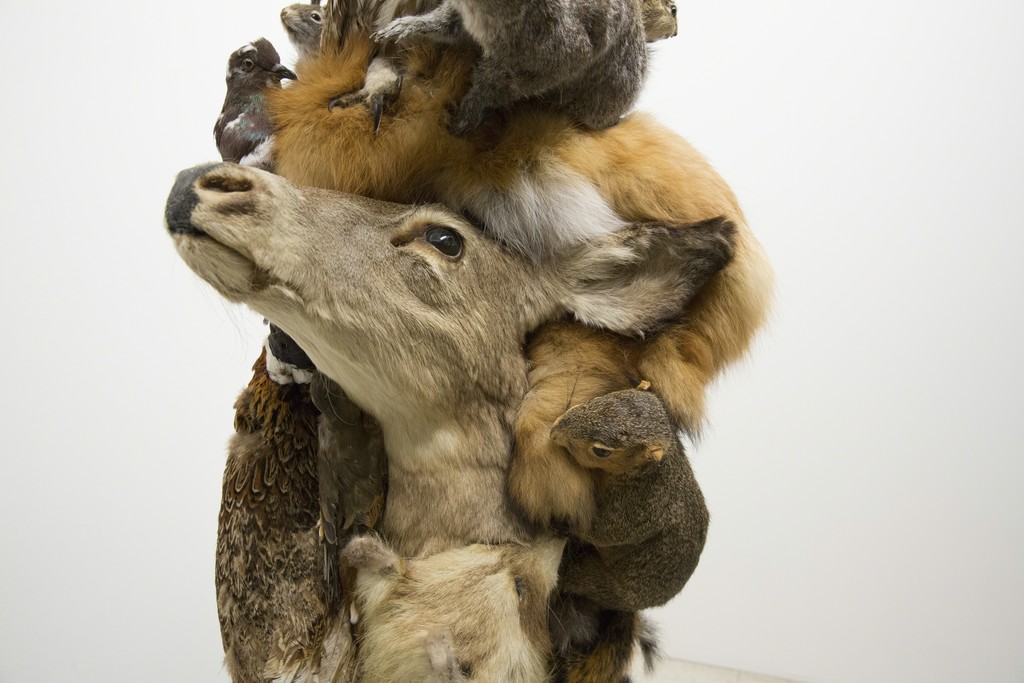 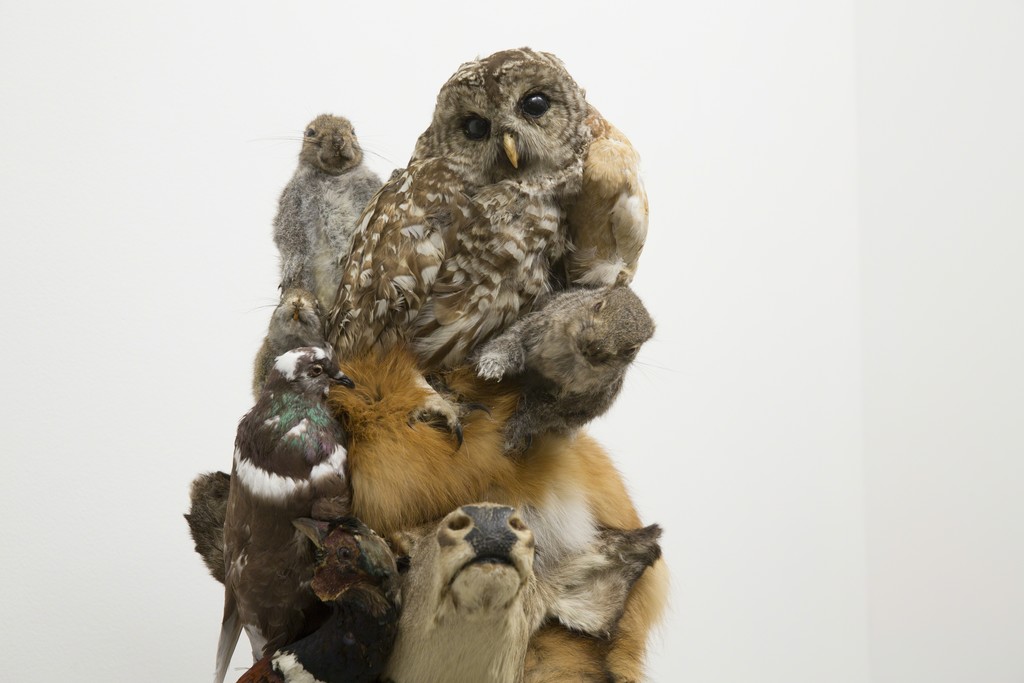 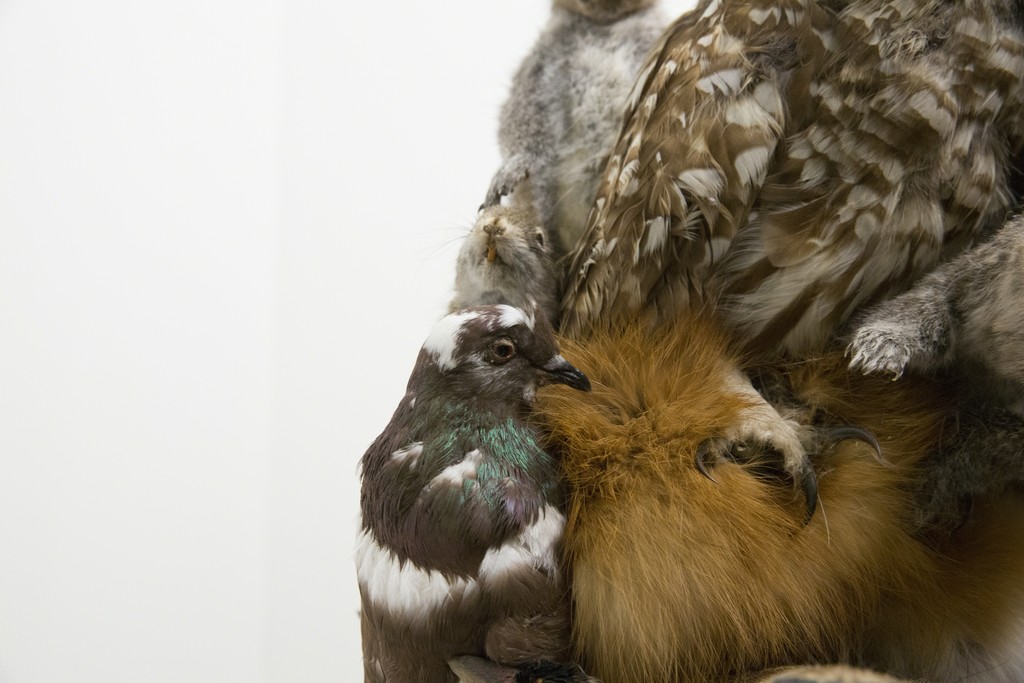 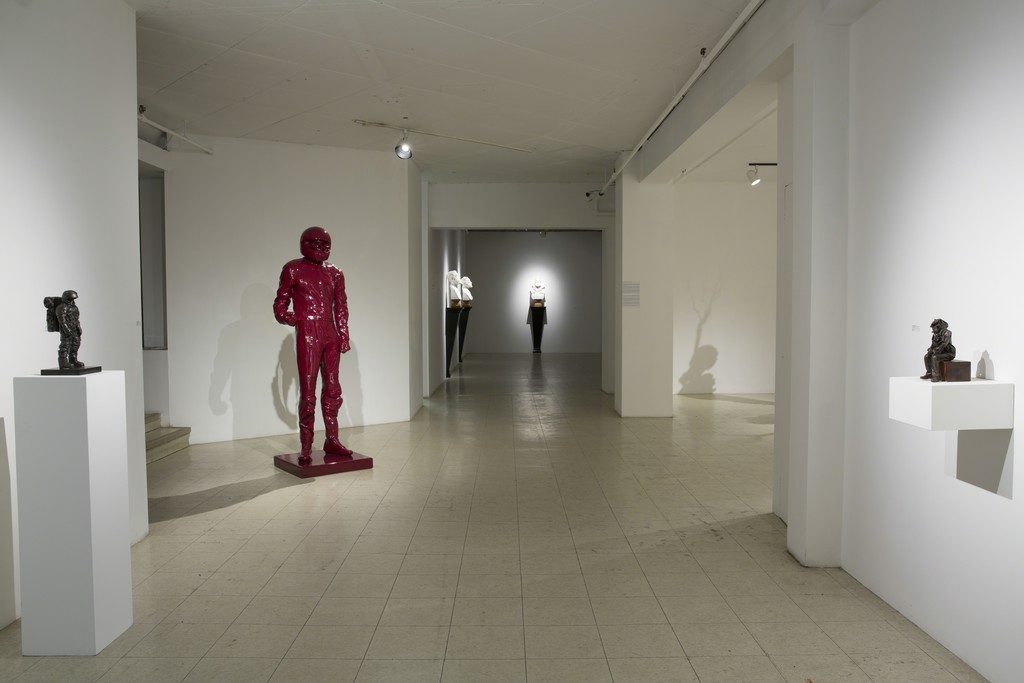 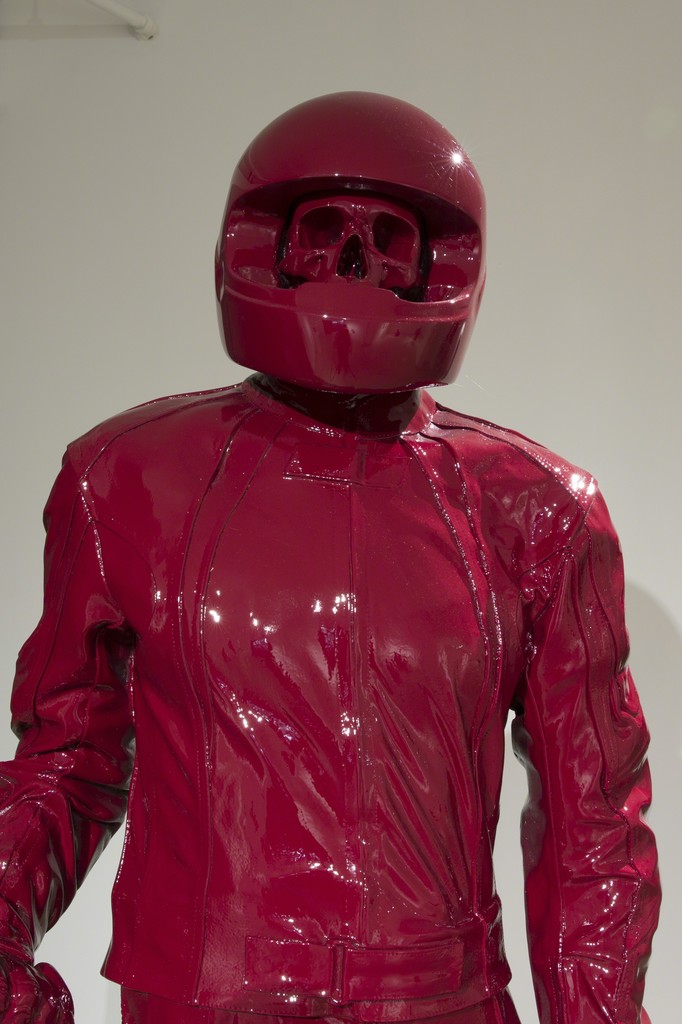 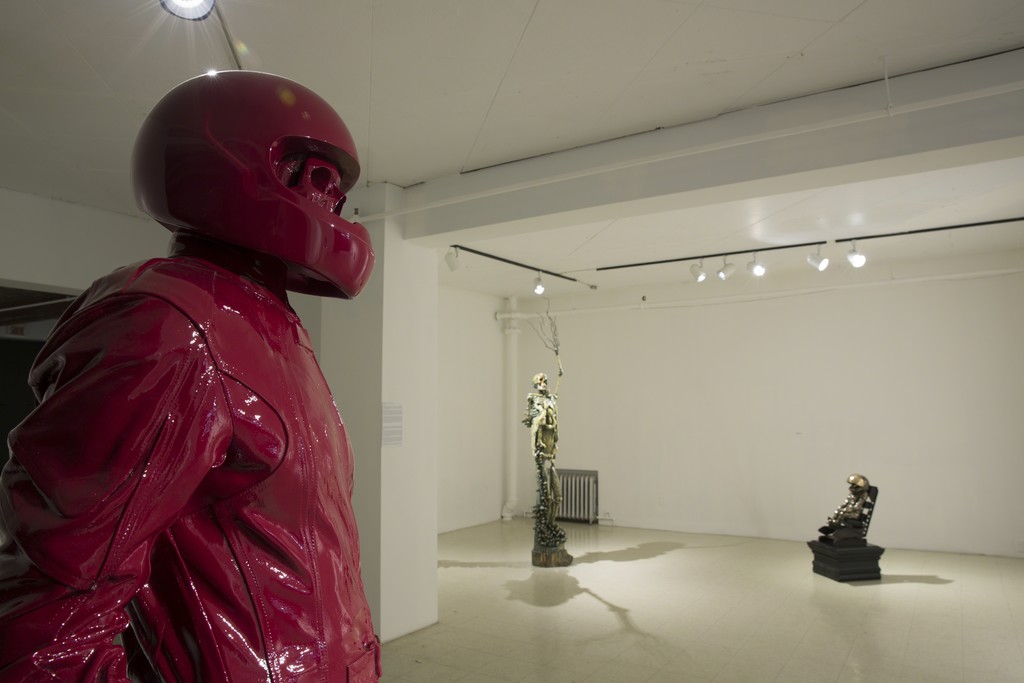 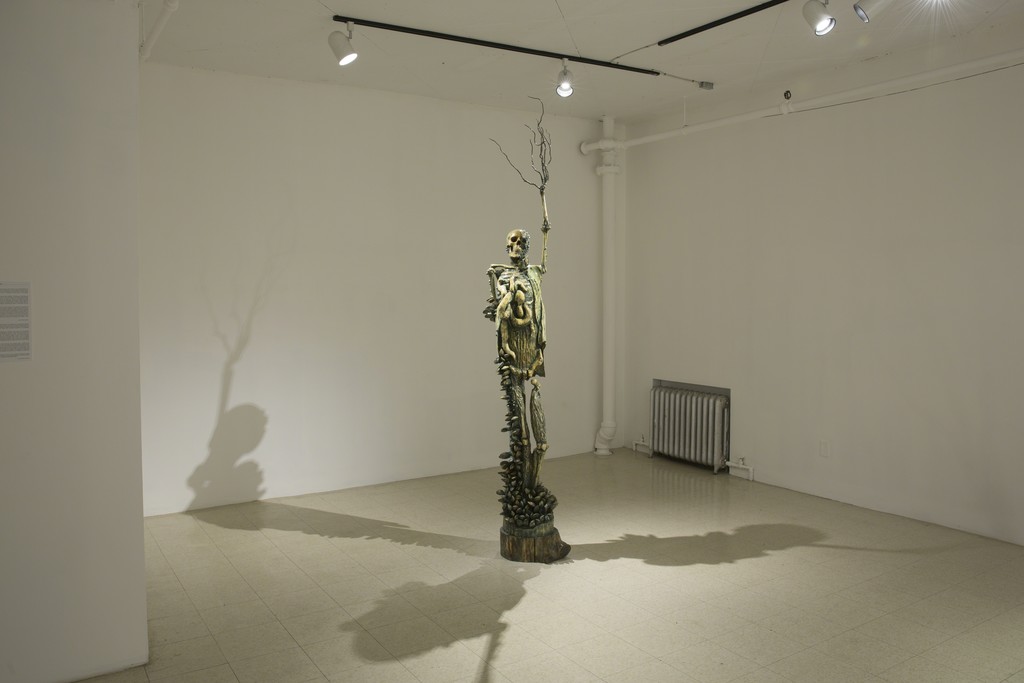 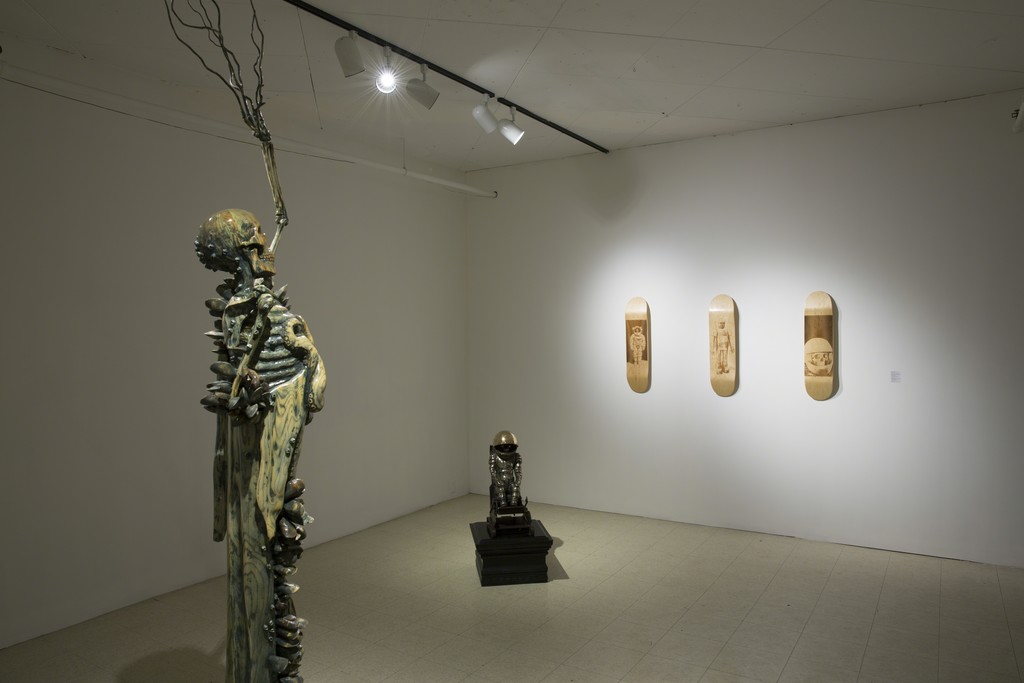 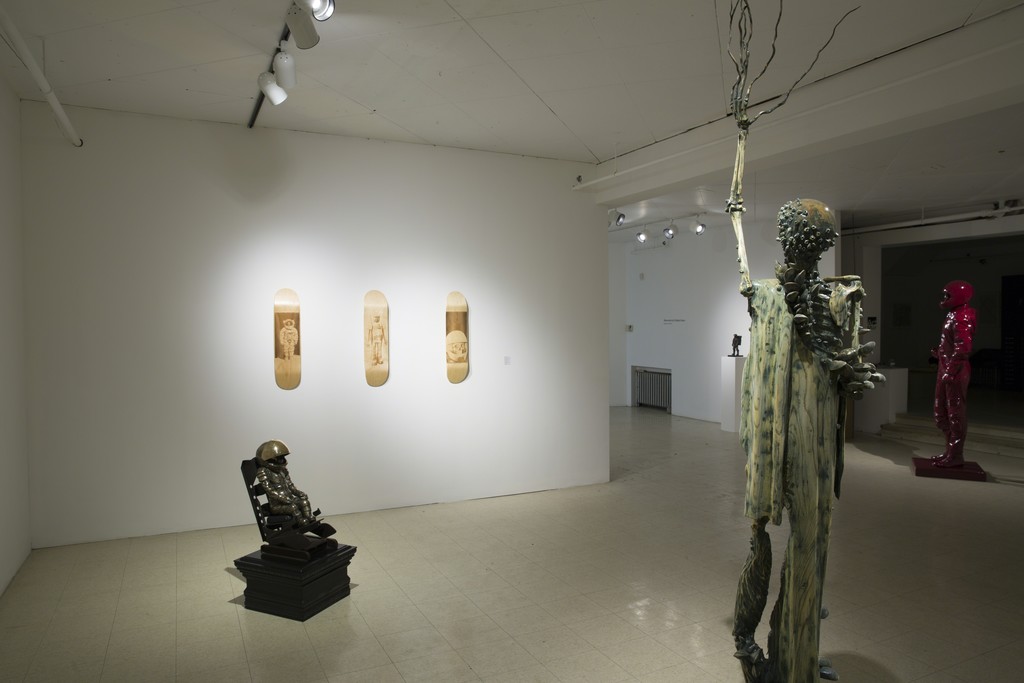 What would a perfect future look like and how would it be represented for future generations to examine and question? What would we choose to preserve from high art and mainstream culture? How will our successes be depicted and will we account for our failures? Perhaps our contemporary mythologies will replace the ancient Greek and Roman gods and goddesses of yore with superheroes, extra-terrestrials and science fiction characters devastated by technological advancement.

Brandon Vickerd works in a realm of unreality where the perfect future is chimeral, where there are more questions asked than answers presented. In his recent pieces currently displayed at Art Mûr, we find skeletons of humans and primates. They are dressed in spacesuits, as seen in Monument to the First American in Space, or trailing tentacles and zebra mussels in The Sub-Mariner. The pieces are evocative, and somehow manage to come across as realistic; incongruous bodies and objects have been integrated into fluid forms. Generally, there is either a lot of movement (literal as well as implied) in Vickerd’s work, or a stasis, as seen with these beings frozen in action. They are unabashed in their theatricality. The polished, vibrant sculptures in these galleries represent a kind of death and memorialization. The forms are stripped of flesh and dressed in protective suits (potentially after the implied catastrophes), which appear either manufactured or suggestive of the organic.

Ghost Rider is an imposing, larger than life figure clad in motorcycle gear. The sculpture itself is unified by the monochromatic shellac of red automotive paint covering every inch of its surface, elevating the being to pop icon status. Standing on a square plinth, the rider becomes a superhero at rest, with his left knee bent and his hand balled in a fist, standing in a contrapposto half-swagger. It is equal parts classical sculpture and G.I. Joe figurine. The body seems vital and strong, his suit clinging to his form and folding at the joints. The illusion is subverted when it becomes apparent that the helmet is actually framing a skull, alluding to questions of risk, volition and mortality. The seated simian in Monument to the First American in Space appears locked into its spacesuit holding all the potential of an intergalactic voyage where the craft has already crashed, and there are no survivors.

Vickerd cites technology and failure as concerns that he explores in the art that he makes, and both are certainly conveyed in Monuments of a Perfect Future. In these works, the disasters have already happened, and Vickerd provides visions of what it might look like to rise from their rubble, or confront their aftermath head-on.