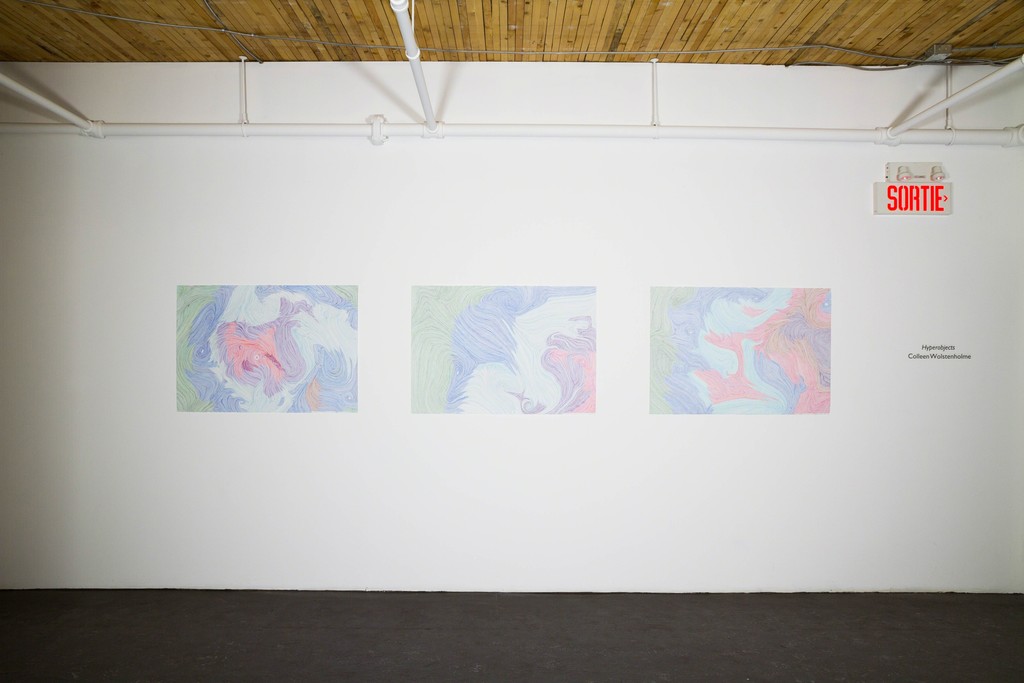 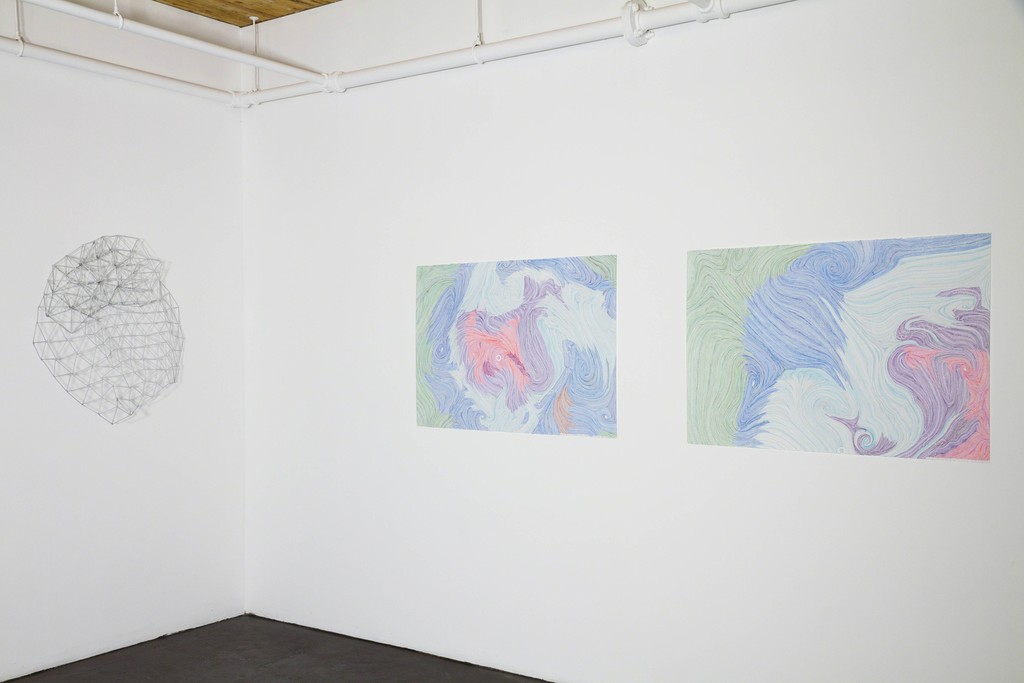 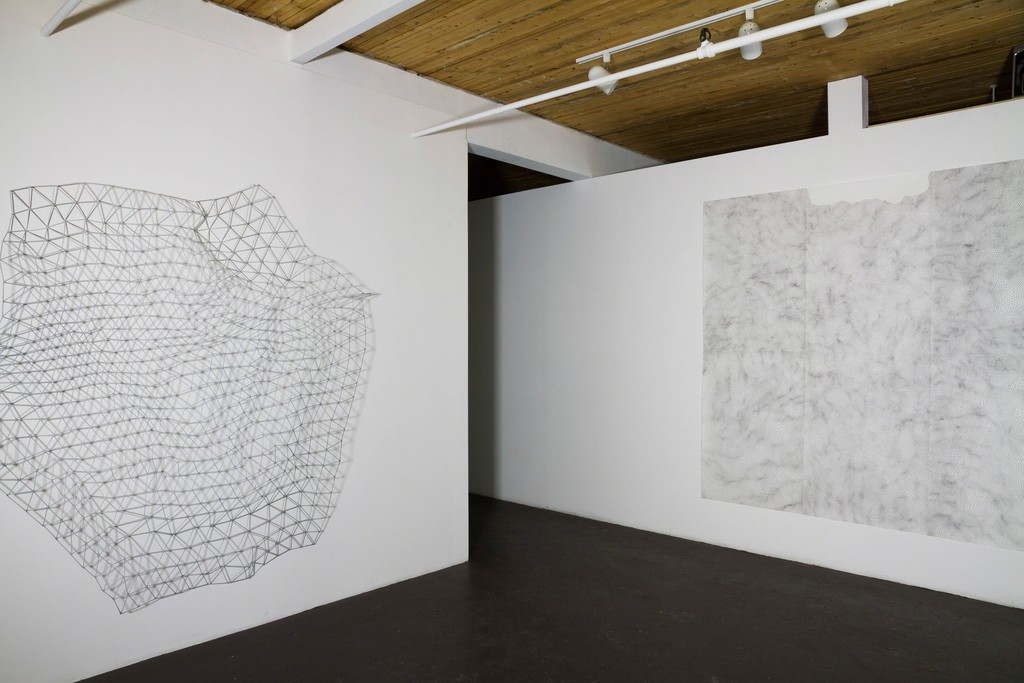 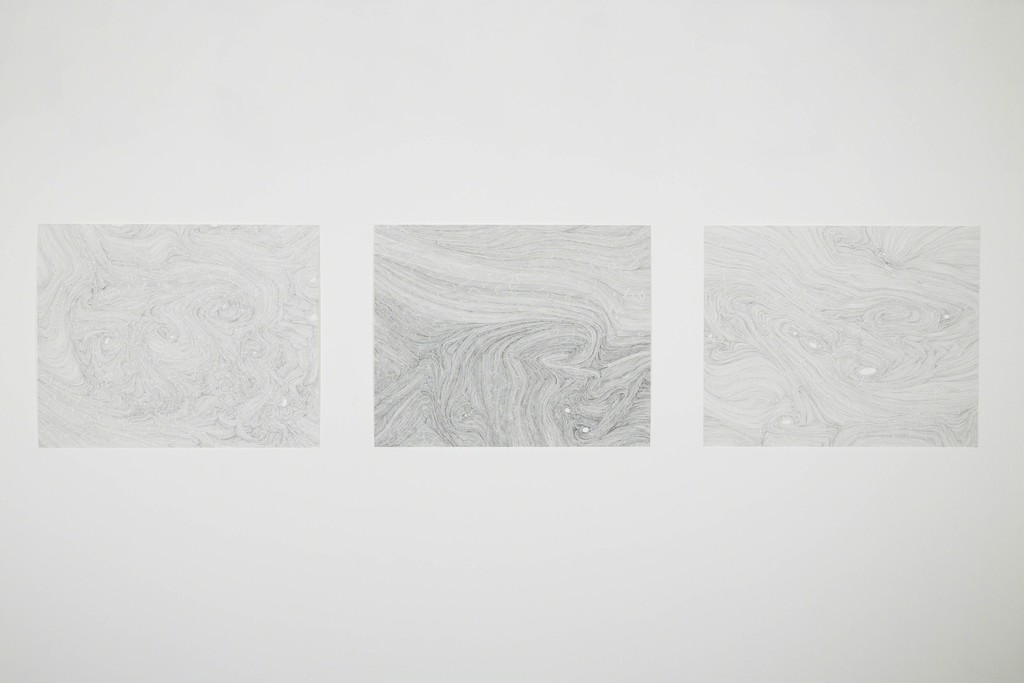 In Hyperobjects, Nova Scotia-based artist Colleen Wolstenholme presents works that developed from her earlier drawings of brain cell patterns and her interest in the way consciousness emerges from physical formations in the brain. While philosophers and scientists have persistently pondered the nature of consciousness, some have questioned whether our most private and qualitative experiences of the world could ever be explained by neural oscillations in the cerebral cortex. Carried by the current of her interest in the puzzling problem of consciousness, Wolstenholme’s most recent work is an attempt to grasp complex configurations that elude total comprehension.

As a member of the object-oriented philosophy movement, Timothy Morton defines hyperobjects as “things that are massively distributed in time and space relative to humans,” systems and undetectable forces that have a real and powerful effect on our world. We might notice manifestations of their constellations, but hyperobjects ultimately challenge the assumption that humans can stand outside, transcend or master all systems and objects in the world.

Wolstenholme’s drawings of wind patterns are complex assemblages that imply larger systems and entanglements that point to the inadequacy of human attempts at knowing and understanding. Blowing over hills and escarpments, or tracing the flows and speeds of gusts of wind, Wolstenholme’s lines are derived from the codes and relations of a found Earth wind map that unfurls data on global wind conditions in real-time. The coordinates and patterns of breezes, violent currents or blizzards delineated on the found map function as algorithms that Wolstenholme translates into immense drawings.

Coloured lines signal temperature shifts, which change and recur with the predictability of strong winds pummeling a coast. The steady direction and speed of winds undulate on Wolstenholme’s maps like the ridgelines of dunes in the desert. While the titles of her wind map drawings describe precise geographical coordinates, they also pinpoint the sways of larger systems and entanglements. Curves and funnel-shaped vortexes that may signal the location of violently rotating winds are also attuned to the movements of vast patterns.

Wolstenholme also explores the relation between parts and wholes in welded steel geometric sculptures, works that can be configured and reconfigured in different formations. Steel triangles or hexagonals articulate grid patterns; like the connecting threads of an entangling mesh, the adjoining shapes are arranged into interconnected networks. Wolstenholme creates and reconstructs her steal sculptures extemporaneously, like a jazz musician may improvise with melodies, rhythms and harmonies. Rather than improvising or departing from a musical notation system, Wolstenholme establishes rules, such as selecting a form or materials that allow her sculptures to execute themselves. These assemblages do not form closed systems, but are continually being revised and enter into different relations with one another. The steel works are coated with layers of powder that glows in the dark, which allows the systems of connections that usually remain invisible to emit light and be perceived without a light source.