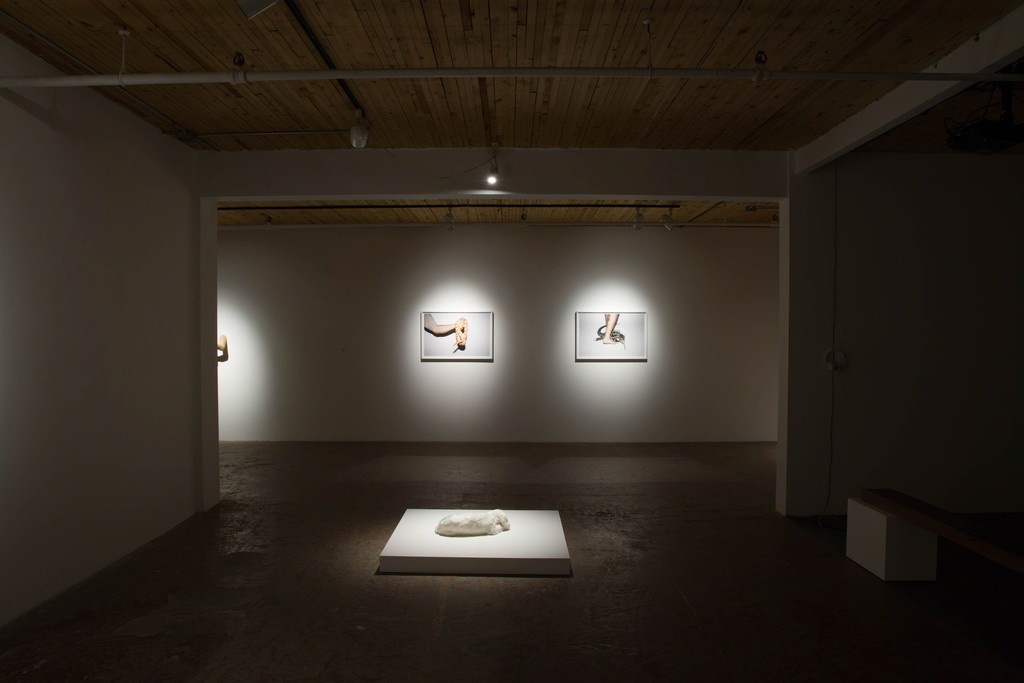 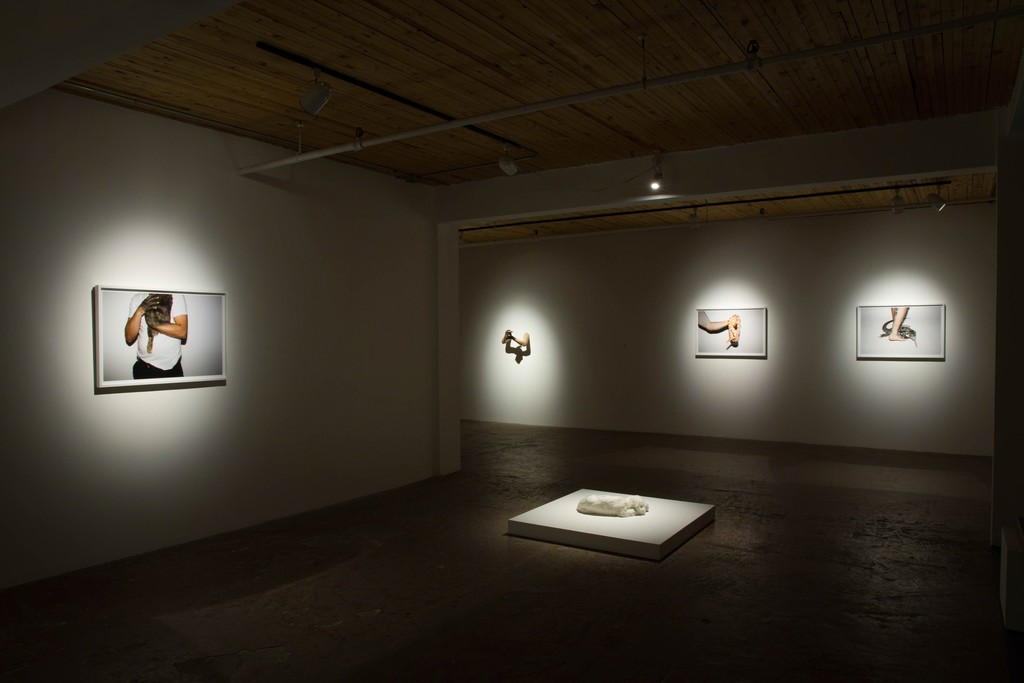 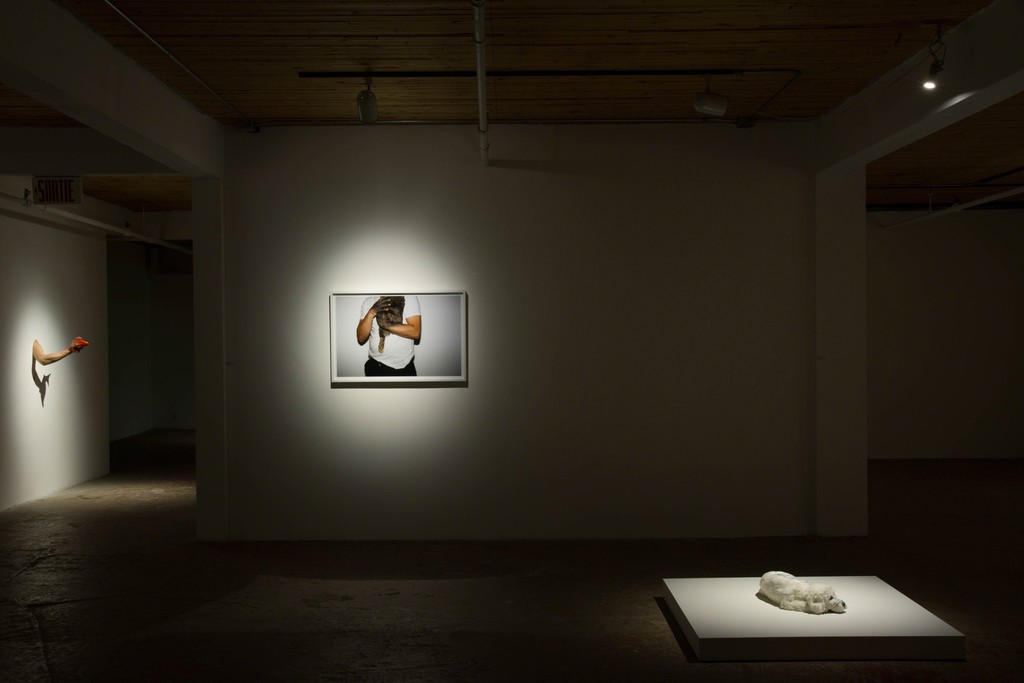 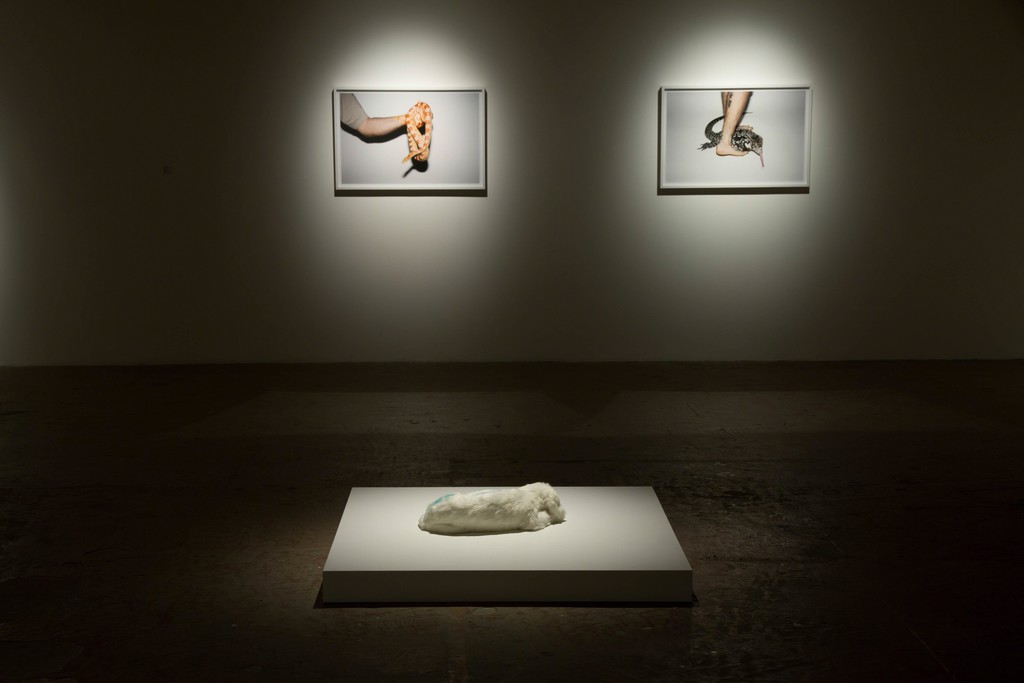 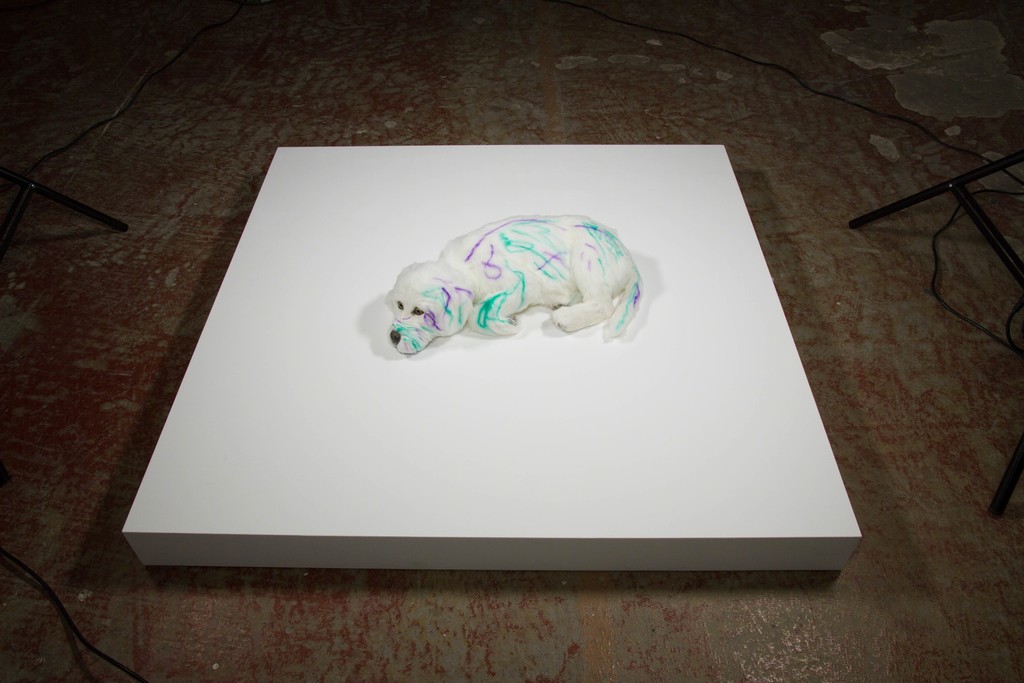 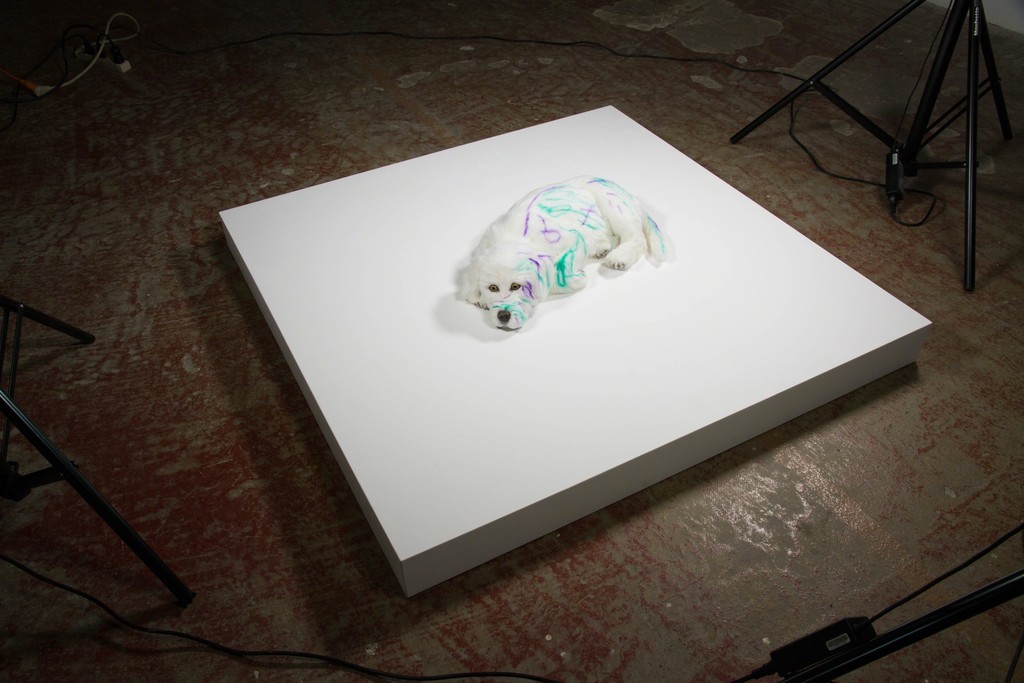 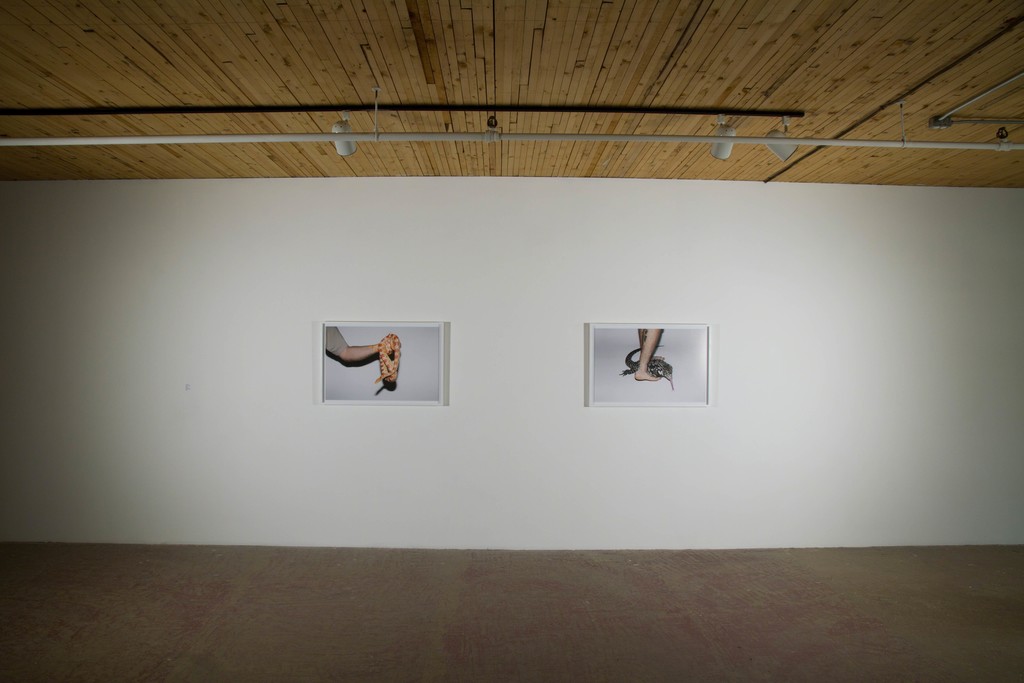 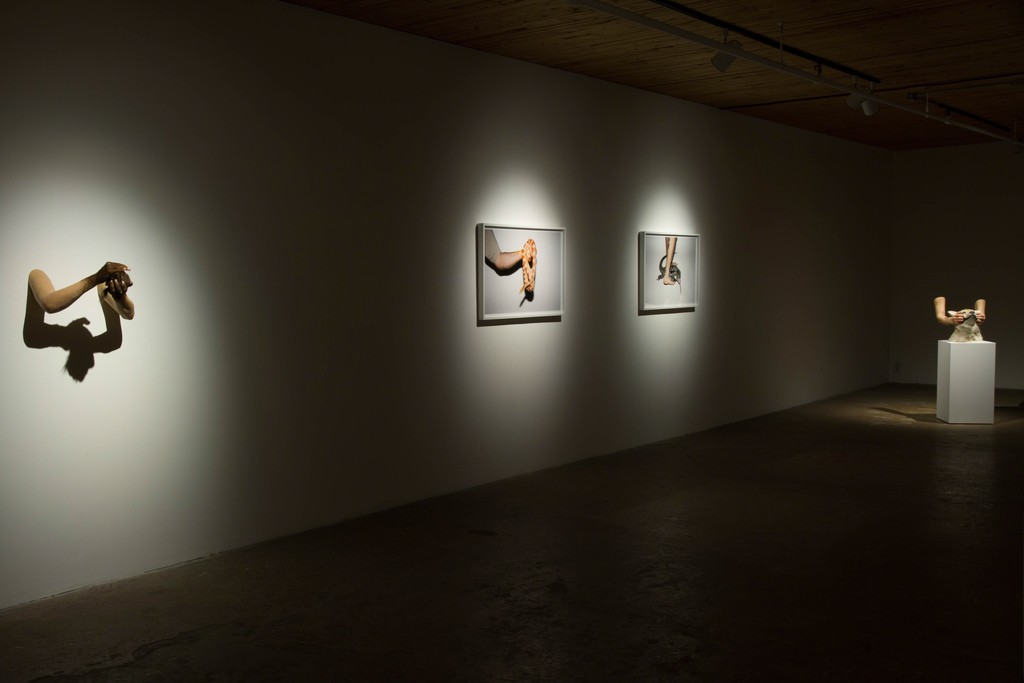 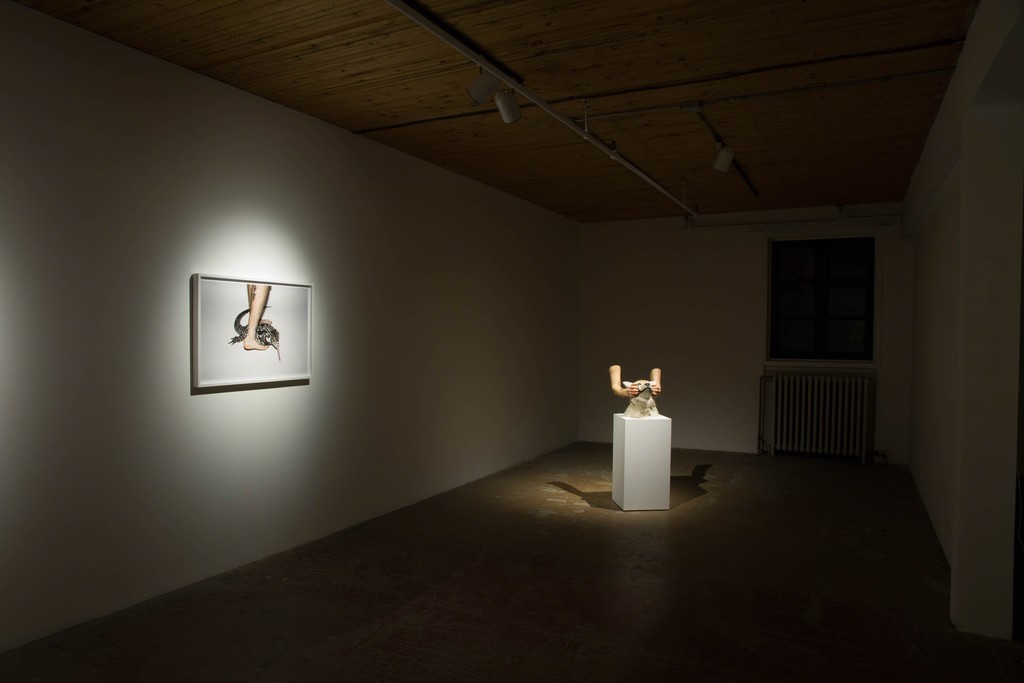 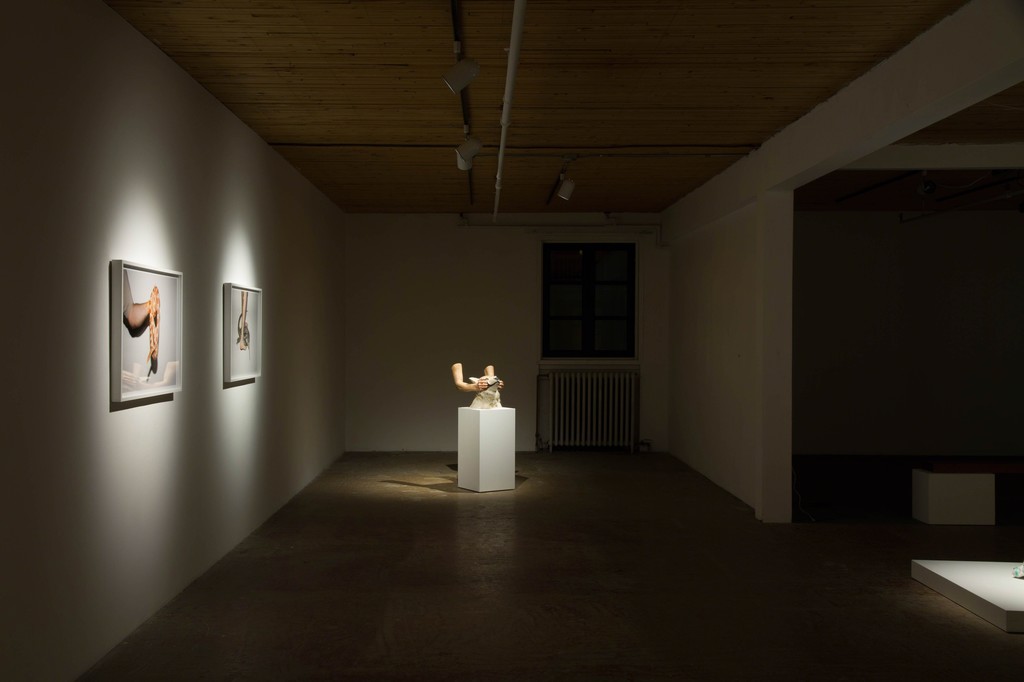 It’s Saturday night and Karine Payette is in her studio. We meander into a conversation about the dog she used to have and her soft spot for German shepherds, an intensely obedient and loyal breed in a deceivingly wolf-like package. Payette’s most recent series of photographs, sculptures and video work seem to speak directly to this preoccupation with the multifaceted nature of human-animal relationships—the dialogues of control, intimacy, violence and domestication that subtly take place on an interspecies level.

Her workspace is part laboratory, part prop closet—a bowl of fur sits not far from her computer. Somehow in this bright, open, chemical-clean scented room, Payette conjures wildness. We are taken to a strange place, the borderlands of interspecies mingling. At one extreme of the animal-human dynamics scale is the stalwart compliance of a professionally trained German shepherd who responds to commands with robotic precision. Here, power is comfortably held by an off-screen voice, animality pacified by a set of linguistic prompts. At the other end of the scale is a sculpture of a human figure clad in red, sharing a languorous kiss with a wolf. The story of Little Red Riding Hood is immediately called to mind, except that here our hooded protagonist seems to have bailed on grandmother’s orders, instead opting for a forest floor make-out with her canine stalker. This taboo mise-en-scène is a brazen inquiry into the boundaries we maintain with our animal counterparts. Its scale and three-dimensionality contribute to a feeling of immersion that the artist has been courting with her work for the past several years. It feels as though you’ve just walked in on something: you are implicated and your discomfort is like an invisible mist that coats these inanimate beings.

Elsewhere in Payette’s suite of anthropomorphic works, the demarcation between species grows even fainter. A photographic series depicts the slow encroachment of fur, scales and feathers on human skin—a striking process of contamination facilitated by touch. The fusion of flesh, charcoal cat fur and a pale silky dress in one of the photographs speaks to the deft textural play that characterizes Payette’s practice.

The imagery in De part et d'autre is otherworldly, borrowing from dark fairy tales, science fiction, nightmares; all things feral are plucked from their contexts and uncomfortably domesticated. Humanness is also askew. Disembodied silicon arms recall that childhood moment of misrecognition when dolls and figurines were so close to being real, save for their unnatural, rubbery skin and sterile, manufactured smell. The surreal and hyperreal collide, but the illusion is so precise that it often spurs a double take. Payette’s commitment to creating this illusion is observable—she shows me some of the “flesh” options she’s been experimenting with, lifting up a translucent slice of silicon that looks thinner than tissue paper.

The hybrid scenarios in this exhibition are alternatingly menacing and intensely intimate, mimicking the ingredients of human-animal connection. Bridging the species divide is unpredictable but necessary, always requiring some combination of risk and trust. De part et d'autre—on either side—there are common cells, common emotions, common drives. Payette’s series holds a distorted magnifying glass to the exact moment of fissure, the precise point at which we delineate our differences.