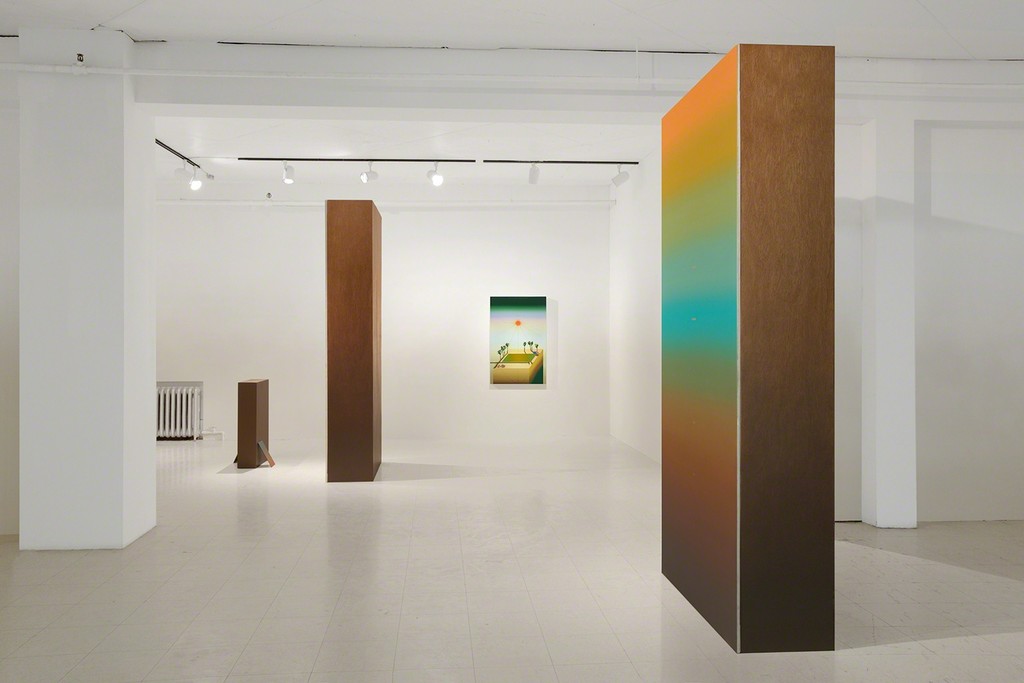 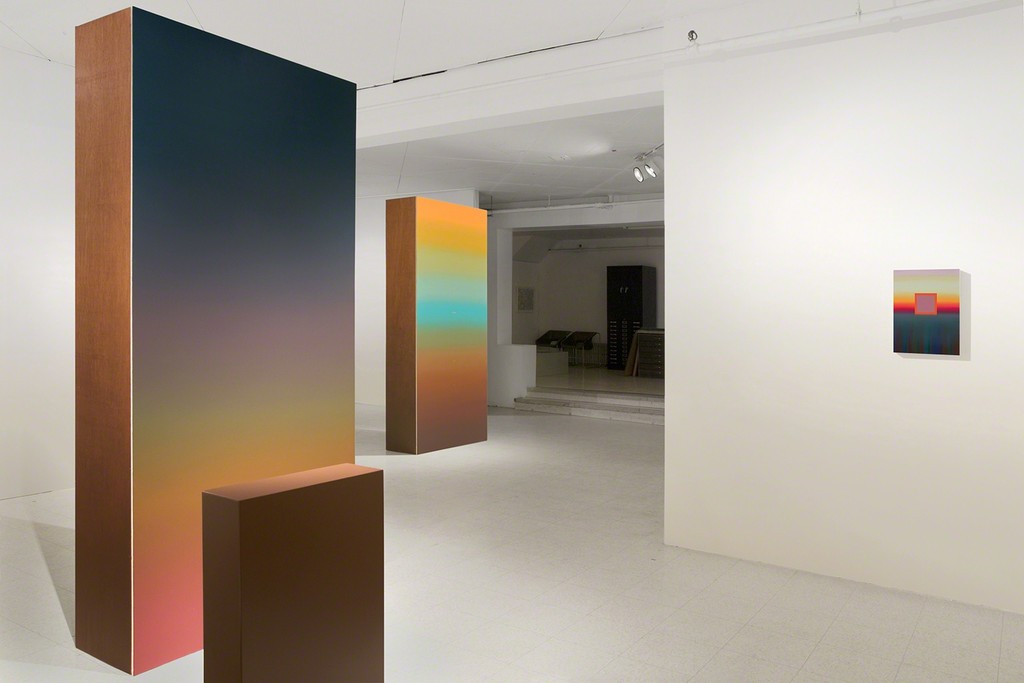 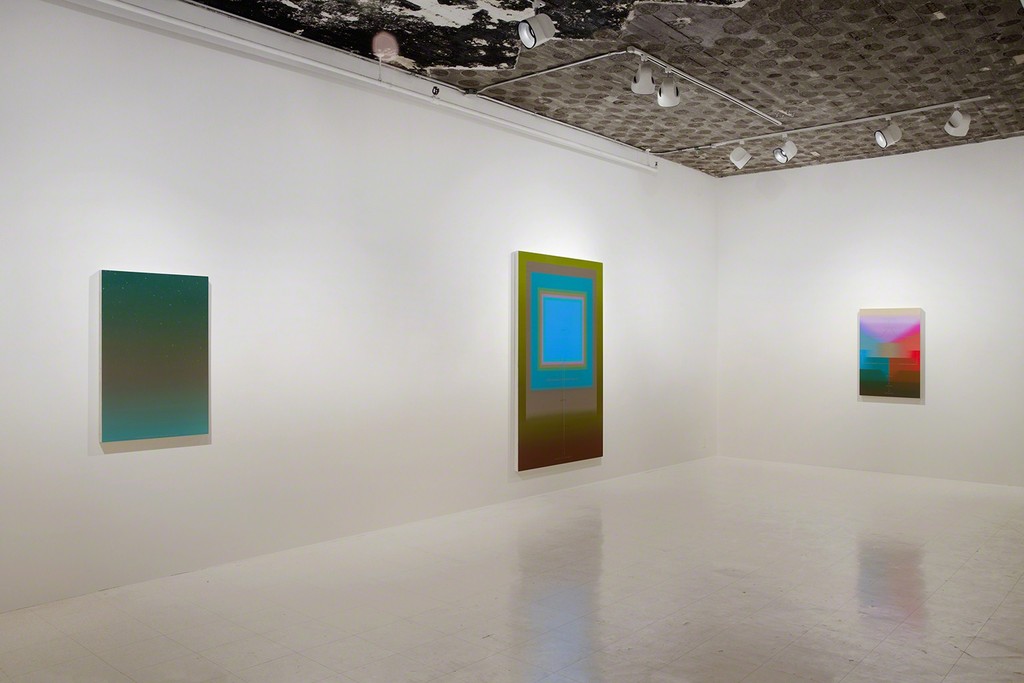 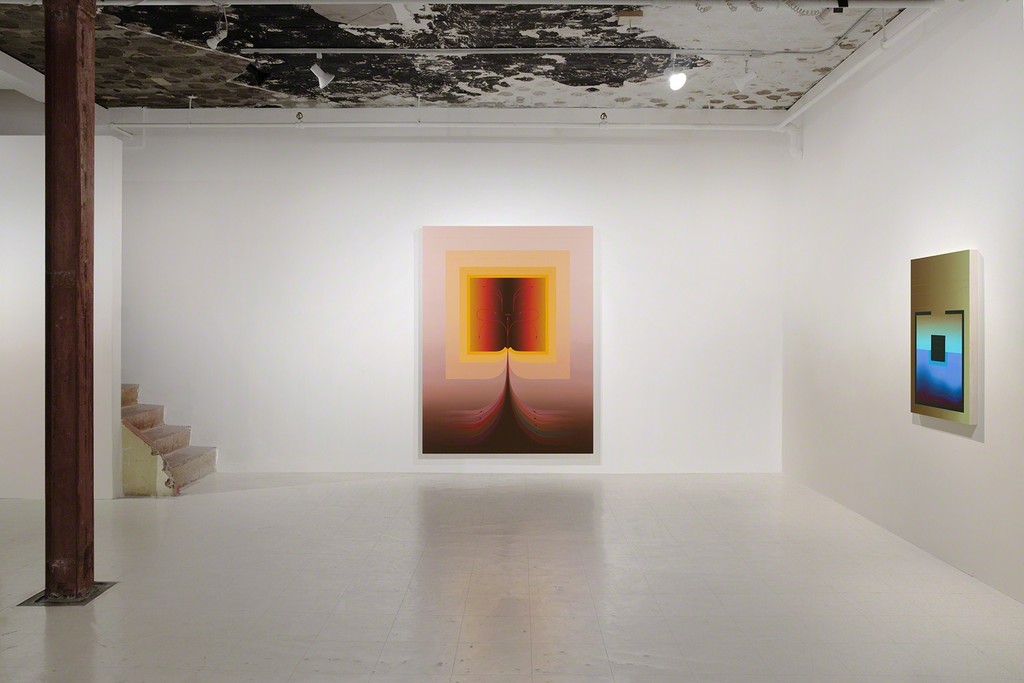 Colour, Sediment and the Course of Politics
Text by Edwin Janzen

In politics, the intense play of competing interests typically ensures that the range of acceptable discourse remains disappointingly narrow. Fearing being sideswiped or spun, even radical movements struggle to stay “on point.” The visual arts, however, can provide a space in which wider consideration of politics is possible. Here, artist Nicolas Grenier invites us to consider how painting and colour theory, taken on their own terms, can reveal new ways to re-envision political discourse.

Grenier’s work evokes a rich lineage of attempts—from Christian revivalists to entrepreneurship coaches—to represent the moral/political universe in a two-dimensional form. With the aid of helpful textual labels and arrows, Grenier guides the viewer through various stages and regions of politically charged colours, blending them painstakingly into one another, activating new colours and leading to new vectors of action.

In Middle Ground (III), Grenier begins with the familiar American electoral trope of blue (left) versus red (right). These colours he blends upward through ever-more-congenial violets (“herculean efforts,” “functional government”), finally arriving at “hope.” The downward way, however, leads past “wishful idealism” and “crusading righteousness” to uliginous greens and browns (“quicksand,” “darkness,” “deep deep shit”). Curiously, “hope,” at top, is not violet but beige, perhaps suggesting that “hope” and “deep deep shit” are closer than one might think—or how, at extremes, apparent opposites begin to approach one another. Recall, for instance, how the Occupy movement held surprisingly fertile appeal to anarchists and Tea Partiers alike.

Every camping enthusiast recalls some lake whose murky depths must have hosted a thousand species, its waters so greeny-brown with vitality the camper daren’t drink them. Grenier studies such abundant, expectant browns in several works; in Resurfacing Sediments, for example, a confident Parti Québécois-blue square (“home”) is expanded outward in colours passing through a series of minty shades (“reassuringly square,” “well-defined,” “color-friendly,” “neighbors”). But as the blending continues through darker, increasingly septic oranges and browns, the square’s bottom gives way like a cardboard box in a puddle, and we quickly descend though several courses, from “nearby” to “out there” to “resurfacing sediments.”

This sedimentation is represented as a downward vector—yet the oranges and browns frame the entire painting, perhaps suggesting that it was from them that the blue square emerged. Here is a crucial point: under specific circumstances, primary-colour politics can achieve laudable goals, yet even when they do they shed continually, dropping grits and sediments that combine unpredictably, opening spaces of new possibility in which phenomena may become their opposites.