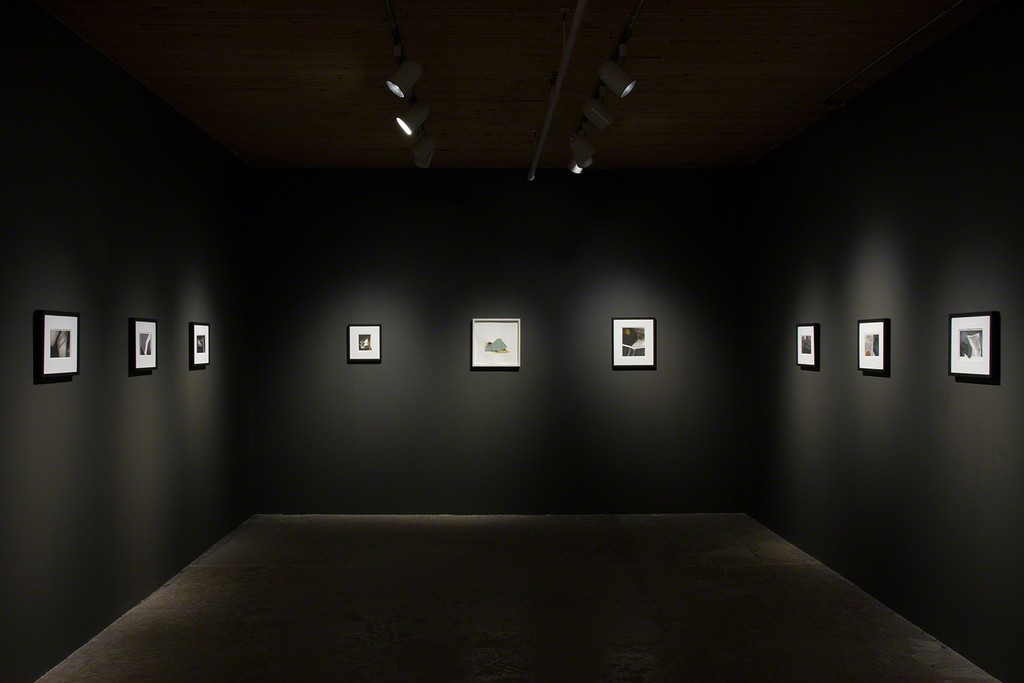 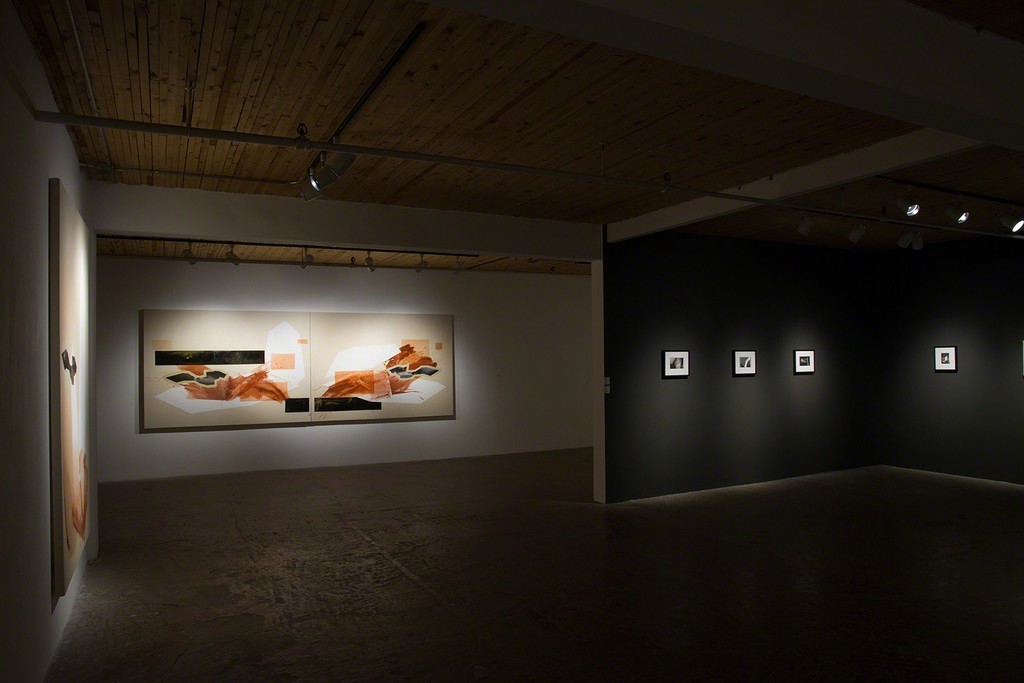 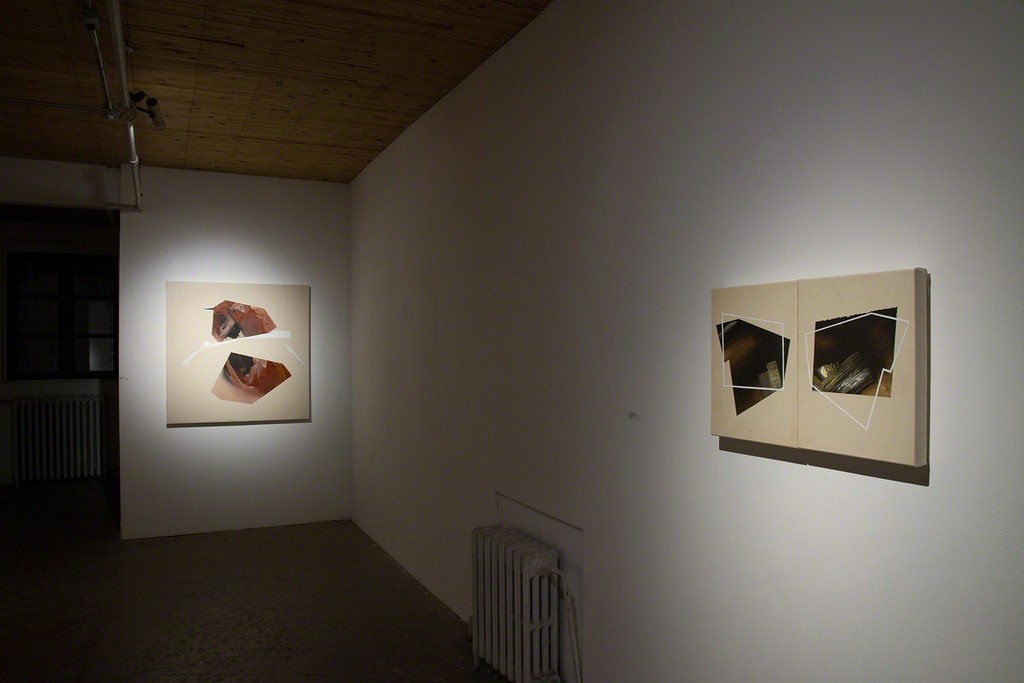 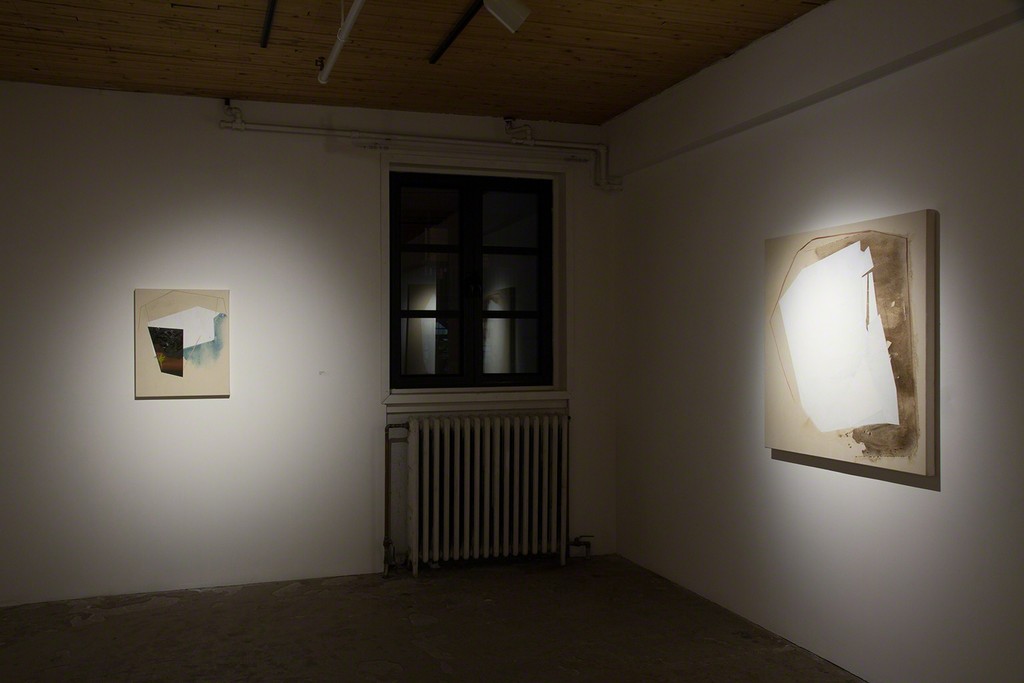 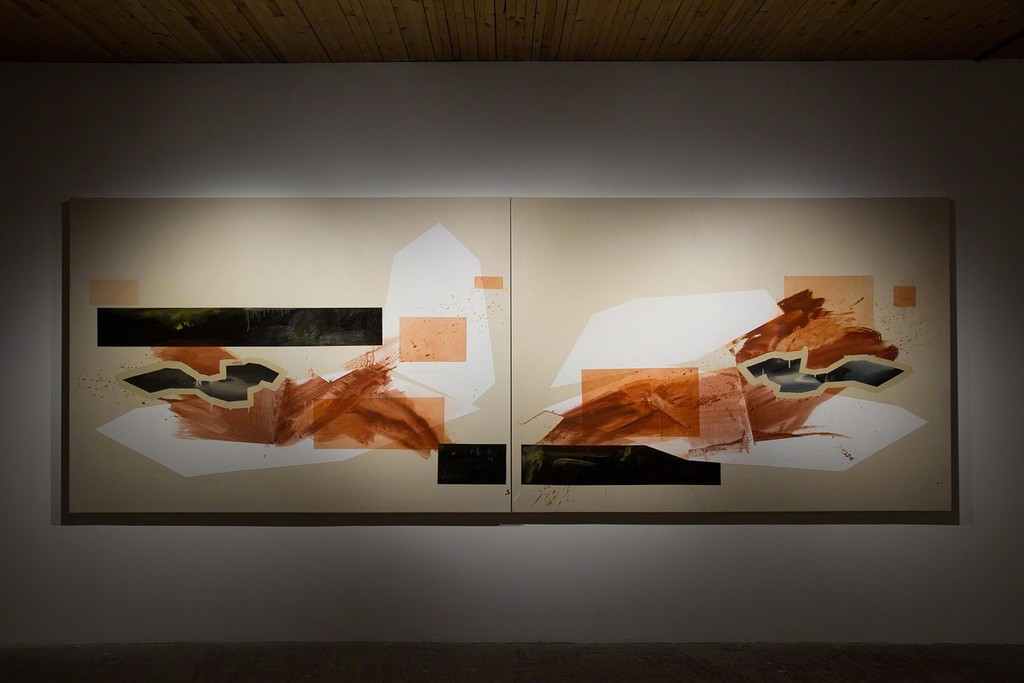 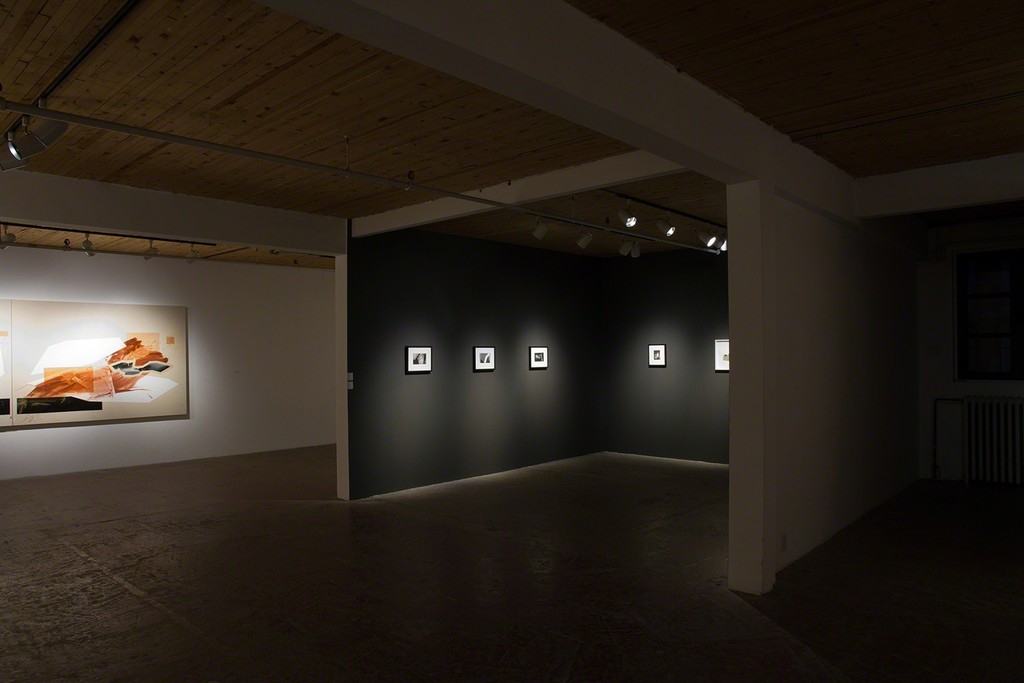 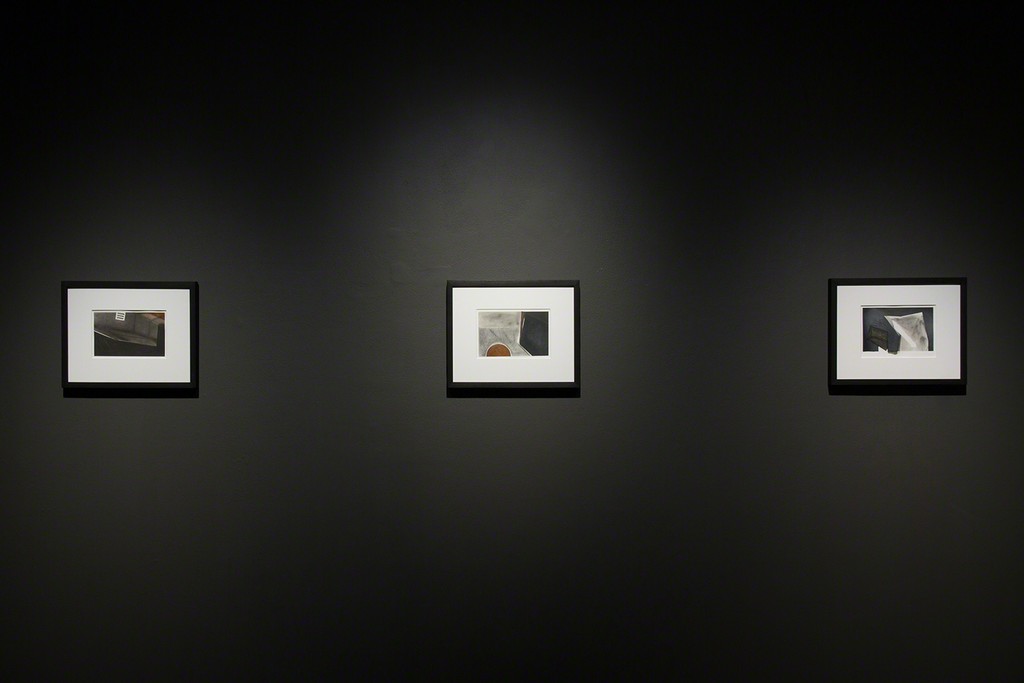 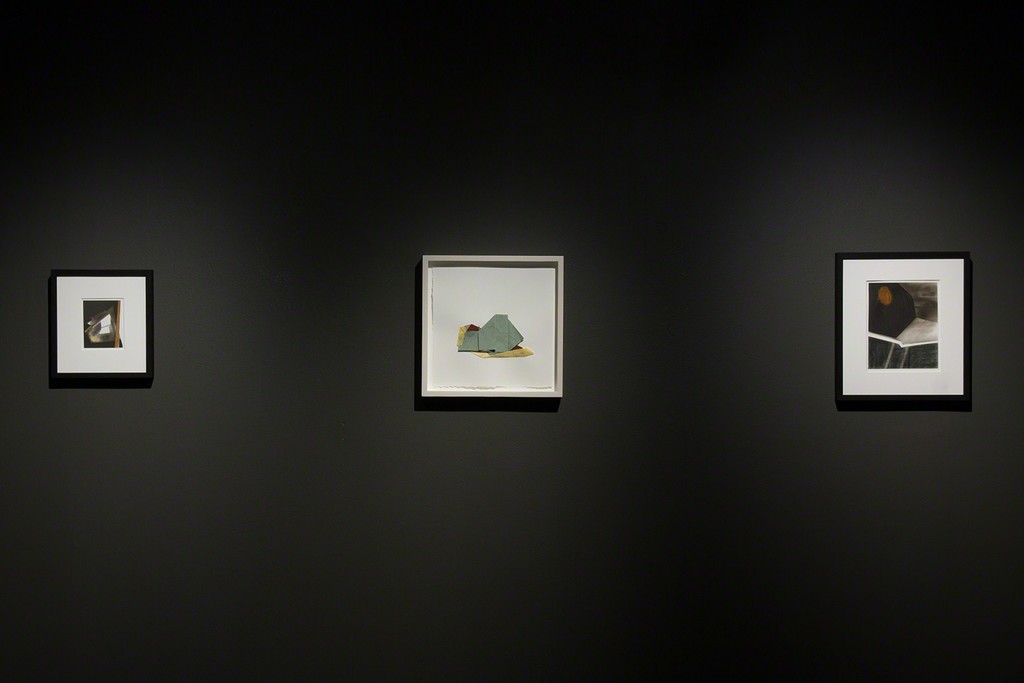 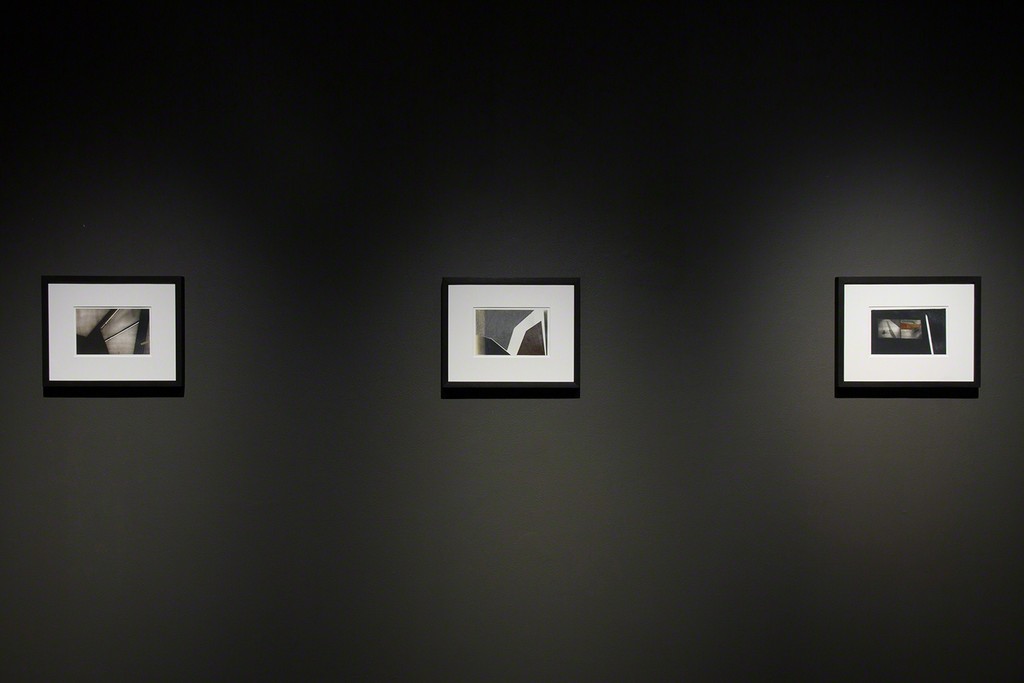 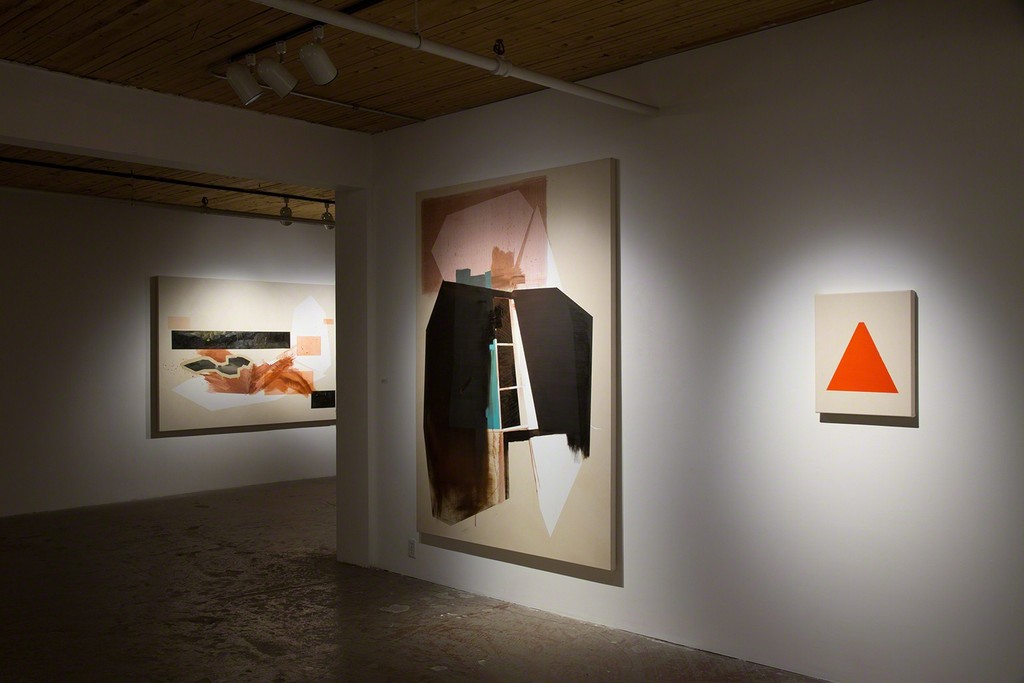 Trevor Kiernander’s paintings are not about you. Necessarily, you are implicated in the historical and painterly investigation they partake in, however the work does not give itself over for free and open interpretation. This integral gesture by Kiernander allows the paintings to become much more than a mere exercise in taste. The work works to determine itself as part of an ongoing discourse on painting as such, transcending the subjective to become an operation of material research into the trajectory and particularities of its medium. Kiernander’s practice precisely articulates this operation through a formal engagement in various painterly tropes that sit in tension to the atmospheric content of the work. Splashes of colour, shapes reminiscent of the outlines of buildings, dissecting lines, masking tape intentionally left in place. Layered over these are occasionally solid blocks of dark brown, occluding other parts of the work, but, more than that, becoming integral elements in themselves, producing a sense of three dimensional space part of which is obscured from view.

These integrated arrangements entwine the figure into the ground and vice versa, attenuating each formal element through the other, performing their operations through an active reciprocation that produces an uneasy relation. If the paintings articulate space, this relation ungrounds that space, disturbing any easy understanding of them as this or that particular place. As such, they stand in for spaces, architectural or otherwise, the sources of which are often borrowed from photos taken or chosen by Kiernander, becoming generic spatial abstractions of real places. The generic here is used to enter the work into an historical investigation of modernism; the lexicons of both modernist architecture and art are adopted and used as content and form, used against themselves to (within the frame of the paintings) displace the hierarchies inherent in their discourses and generate complex images that act as windows on to some imagined “out there”.

The production of this generic but non-existent other space thus becomes a conceptual exercise in the discordant framing of modernism as a utopian project, suggesting through the dialectical complication of the figure-ground relation that the modernist ideological narrative is itself problematically entwined with its opposite. The historical project of Kiernander’s work then, invents a language of disturbed spatial imagination that tells of a dissatisfaction with the instrumentalisation of urban environments and a contemporary malaise specific to the cities he draws inspiration from. In that respect, Kiernander’s work intersects in precise ways with the legacy of urban architecture in London specifically, attenuated through the history of, particularly Canadian, painting as such.