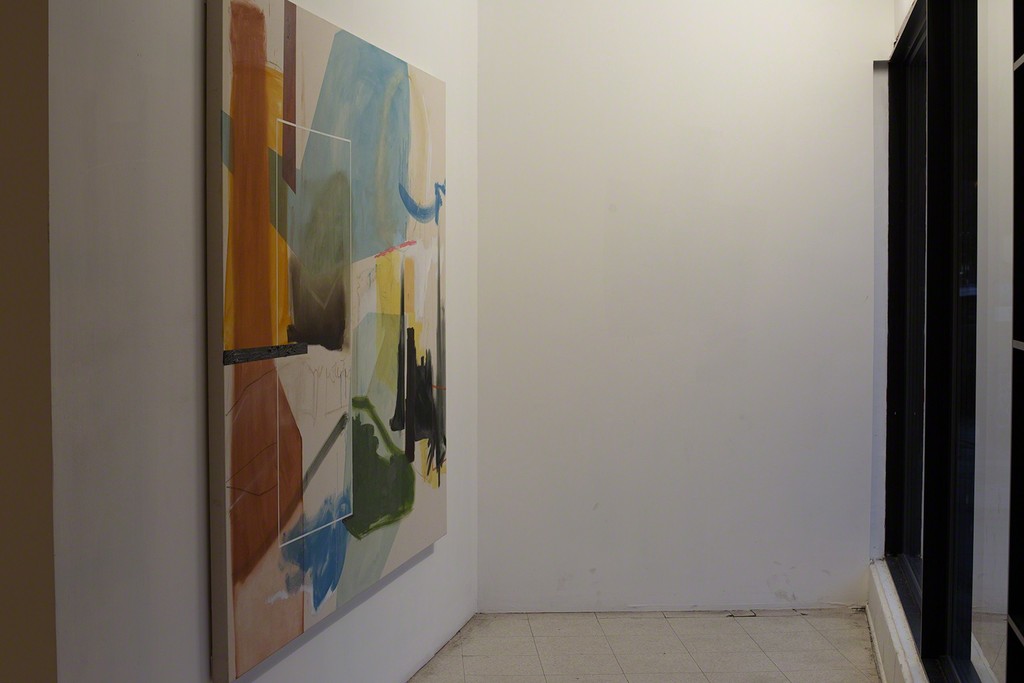 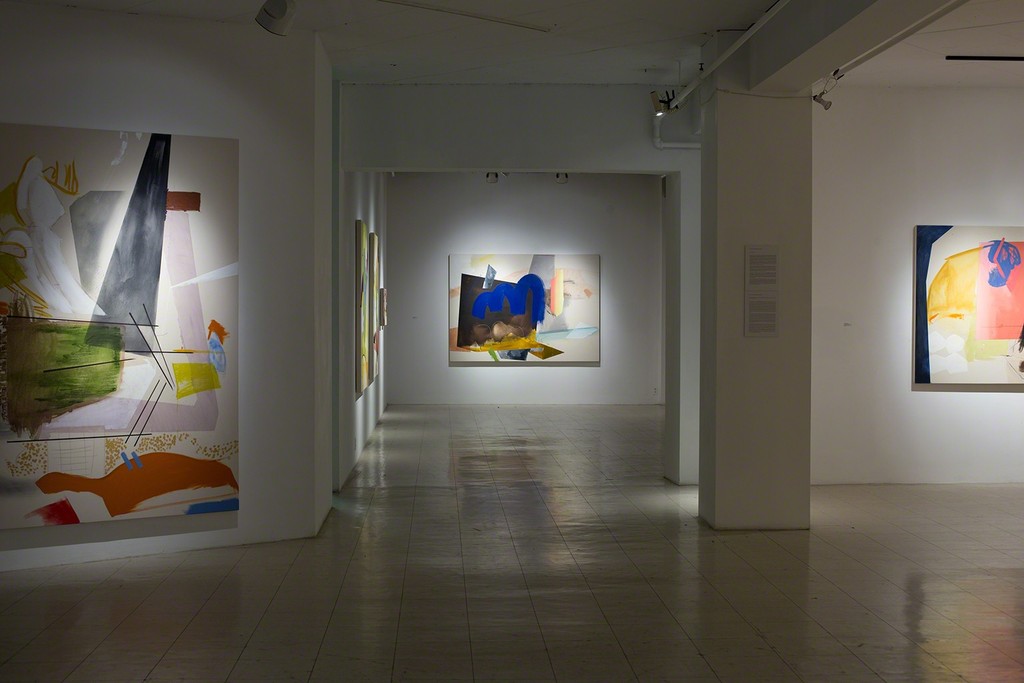 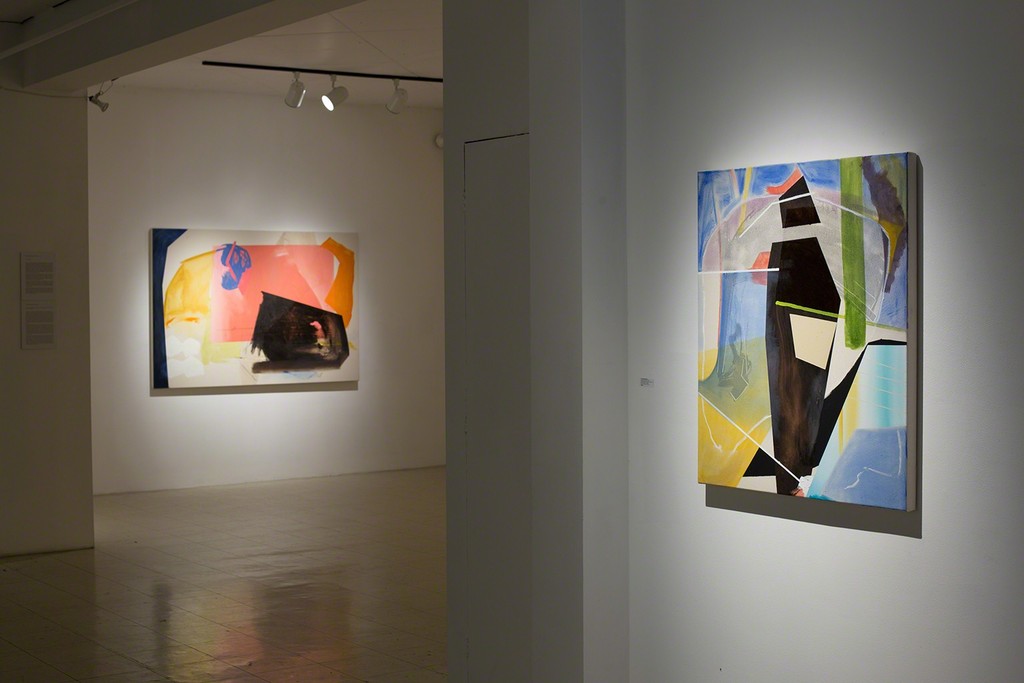 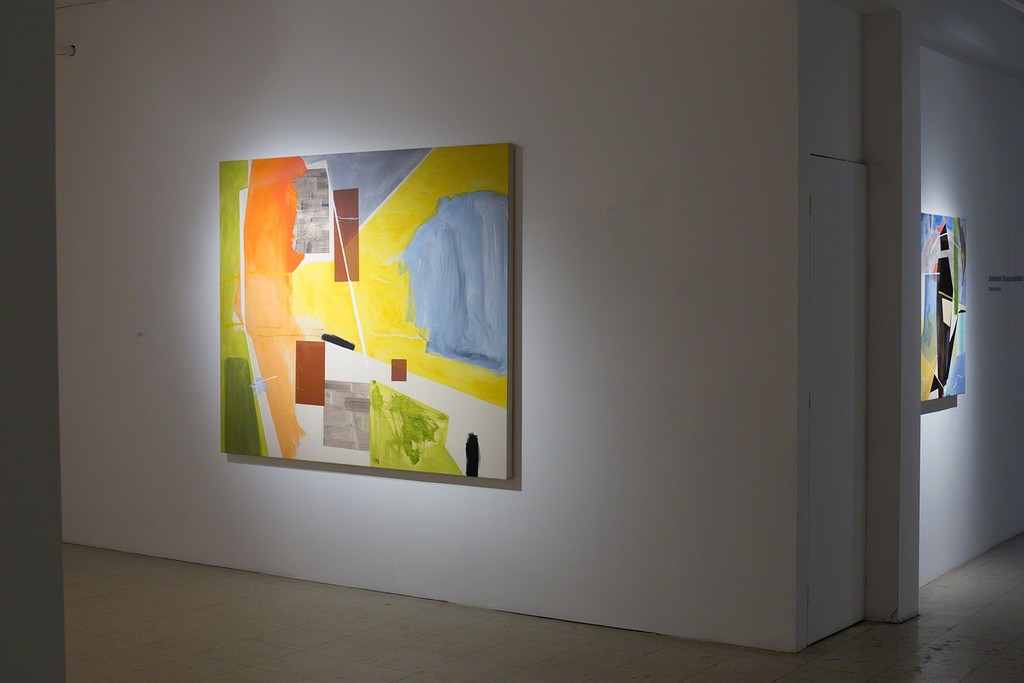 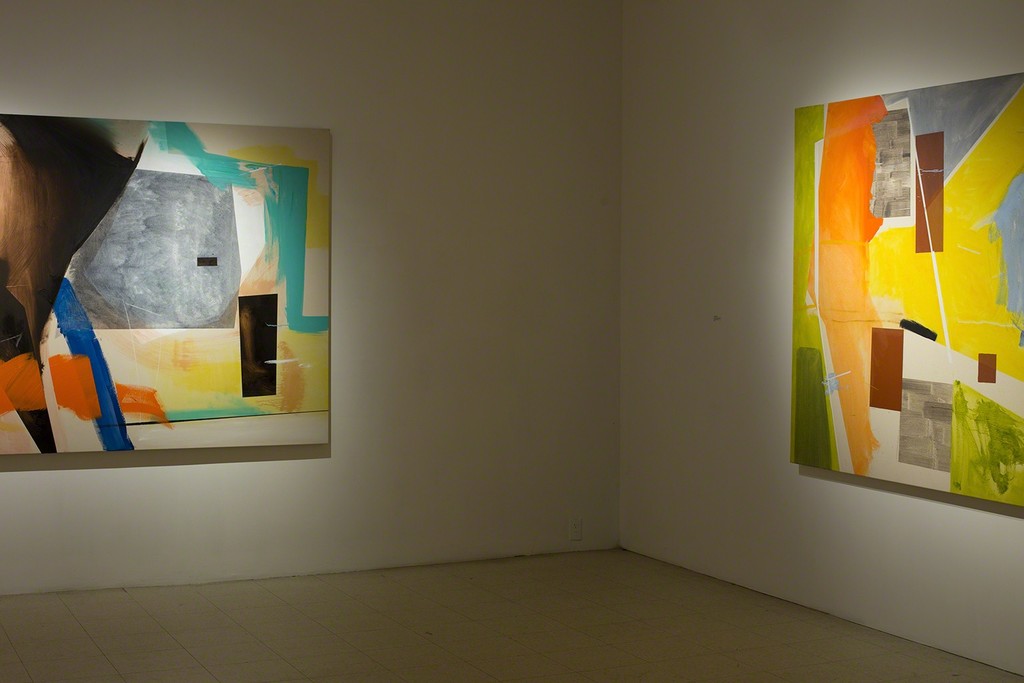 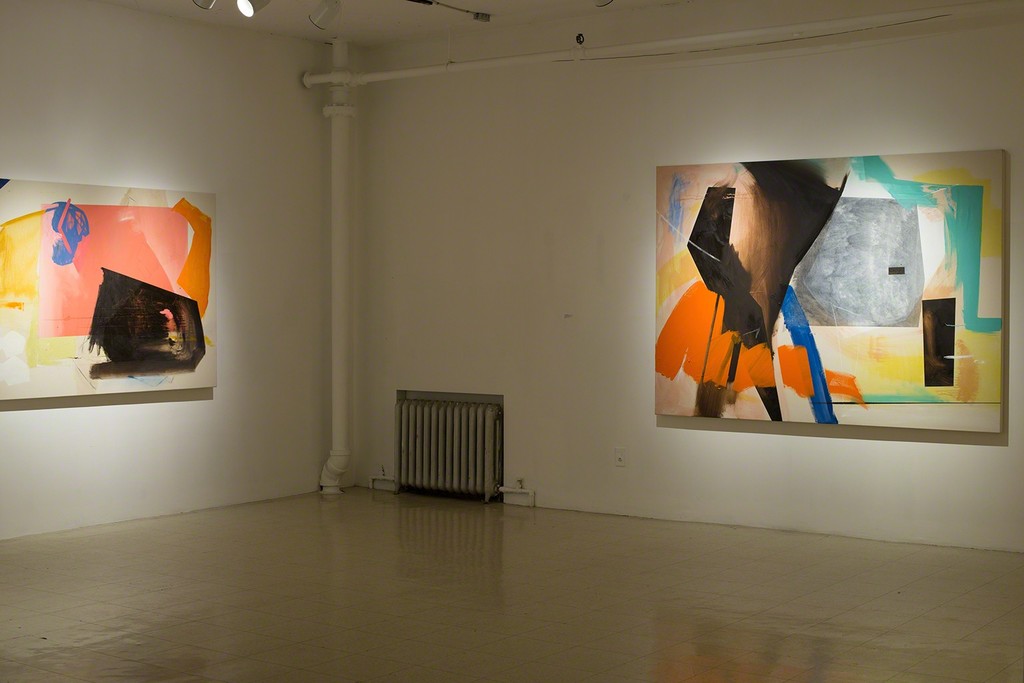 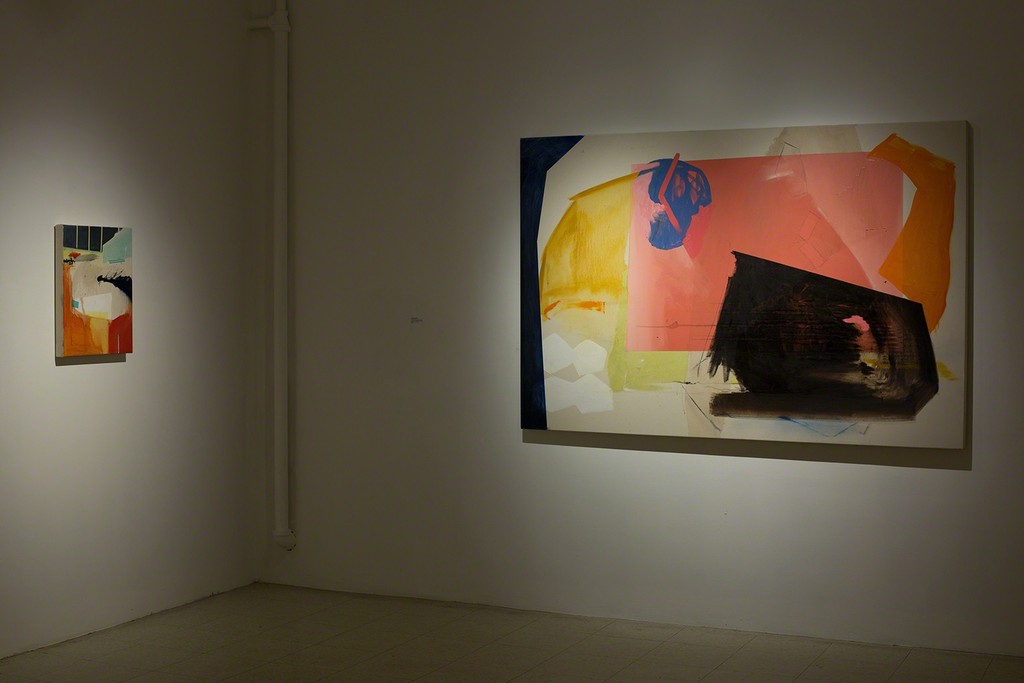 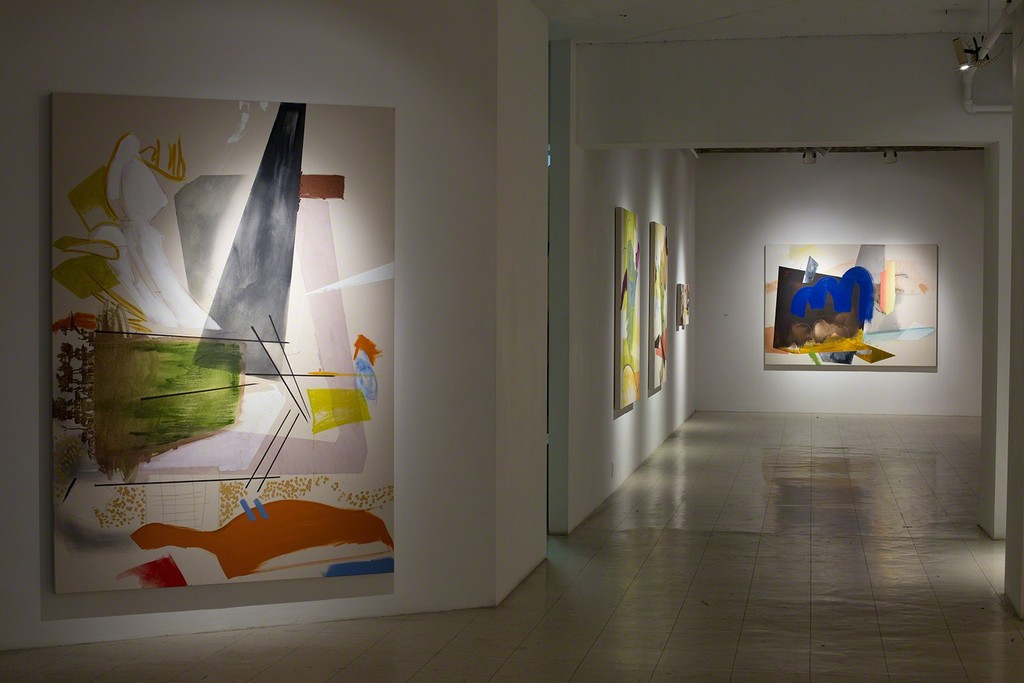 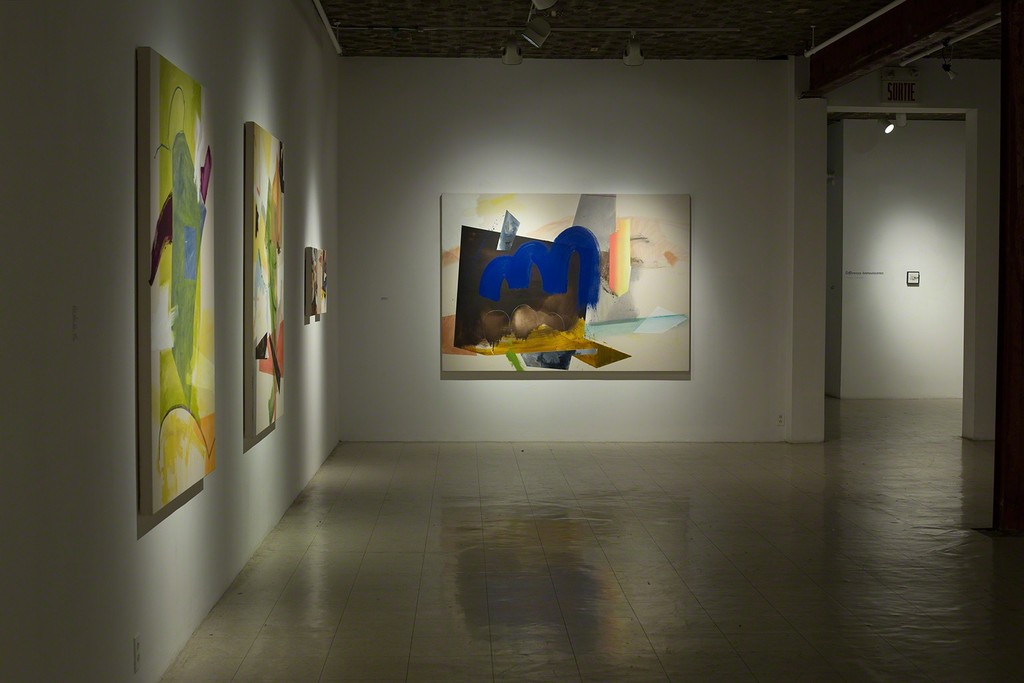 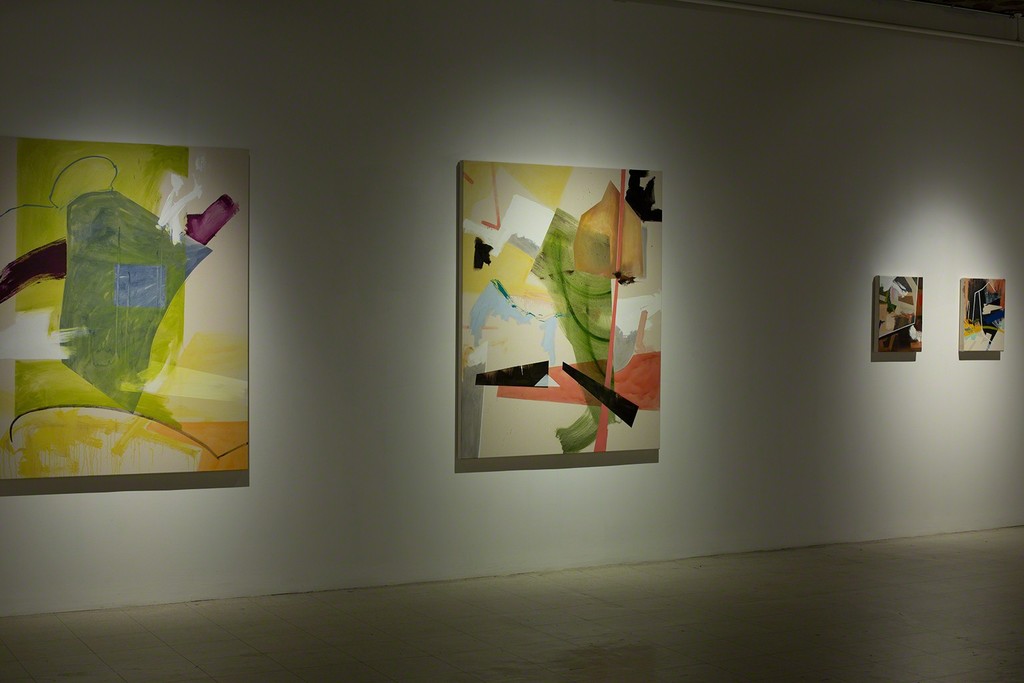 To visually unpick a Trevor Kiernander painting demands somewhat of an archaeological approach. A raw canvas ground, treated subtly with a transparent undercoat, offers up a variety of precisely layered but fragmentary forms, each endowed with traditional painterly concerns of gesture, shape, color and texture. These elements are carefully placed so as to invite the eye to delve across and through their painterly planes, which, like tectonic plates, seem to shift and reveal an opening of further territories beneath. In some cases there even seems to be the potential to dig beyond the raw surface of the canvas itself, to travel somewhere else altogether. The intuitive reaction to this fragmentary display is to attempt its re-assemblage. There are elements certainly of landscape, both natural and urban, of architectural facades, shadows and structures, even signs and symbols, but not one particular thing stands resolute and definite. Kiernander’s paintings are rather the abstract exploration of space and site, of shifting sands, fleeting forms – an impermanent, unfixed narrative reflective of both a personal quest for physical and mental space and an interconnected, fast-paced world which offers a limitless stream of possible source material.

The exhibition’s title Event Horizon: This Must Be the Place references both a cosmic theoretical boundary (within a black hole) from which no further light or particles can escape and draws from Kiernander’s musical influences (This Must Be the Place is also the title of a Talking Heads song with the refrain “home, is where I want to be.”), whilst altogether alluding to the artist’s ongoing pursuit of space, both within his paintings and in his lived experience. This spatial search predominantly stems from inhabiting two cities in the last decade – London and Montreal – the former having tested Kiernander with a slew of impermanent living situations over a seven-year period during and following a Master’s degree at Goldsmiths, and the latter acting as his home for the last two years and finally offering some sense of environmental stability. The gradual compositional freeing of space in Kiernander’s works of the last few years can be attributed majorly as mirroring his physical and psychological experience of these differing urban environments.

The fragmentary motifs populating Kiernander’s paintings negate a sense of hierarchy and are drawn from sources as varied as architectural features, signage, trash and TV stills, predominantly recorded using digital photography. His multi-layered renderings of this daily flotsam, distilled through memory and painterly abstraction, owes much to the action of collage and, drawing on his background as a DJ, remixing. Unhinged from their original contexts and floating in an undefined ‘scape’, these multi-layered aesthetic compositions can just as easily be envisaged as an interior, psychological space, or as a visualization of cyberspace with its interconnected perspectives and seemingly infinite abundance of information. The works presented in Event Horizon, loaded with residual fragments filtered from Kiernander’s own long formed ‘search history’, evidence that he is beginning to discover that elusive sense of place that he has been seeking for so long.

This text is an edited excerpt from the catalogue essay ‘Fragments of fragments, in space of space, of sites unknown’ by Rebecca Travis