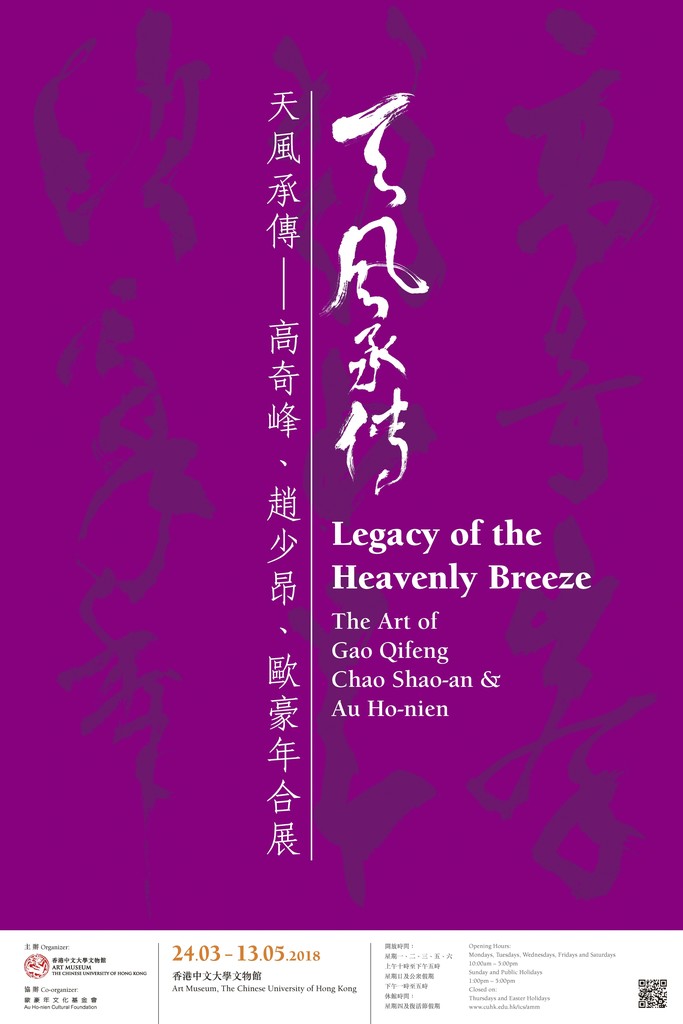 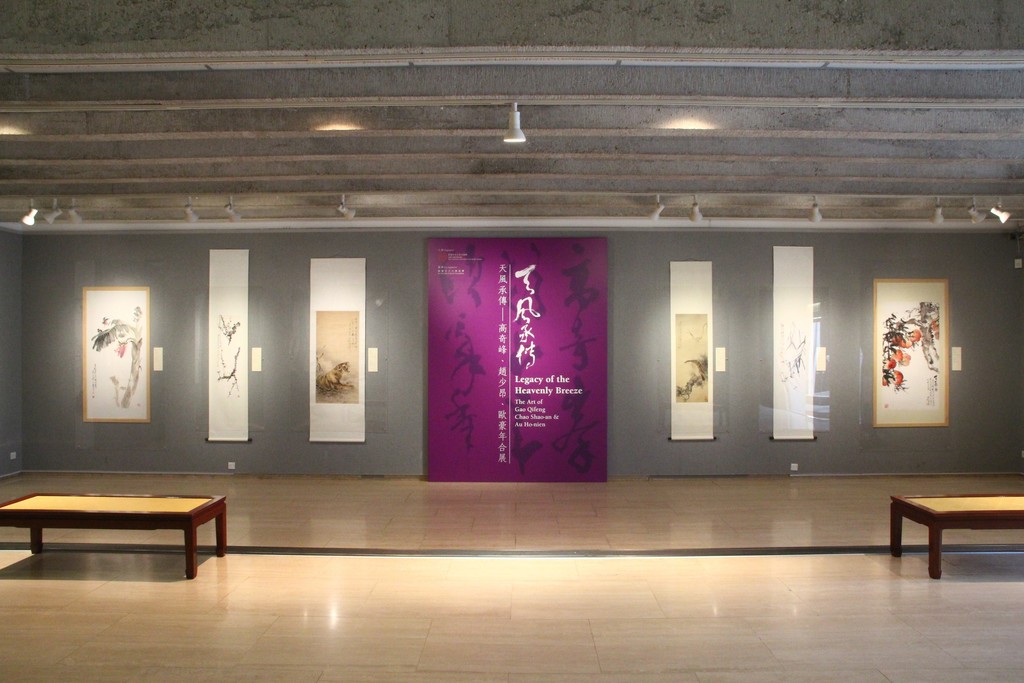 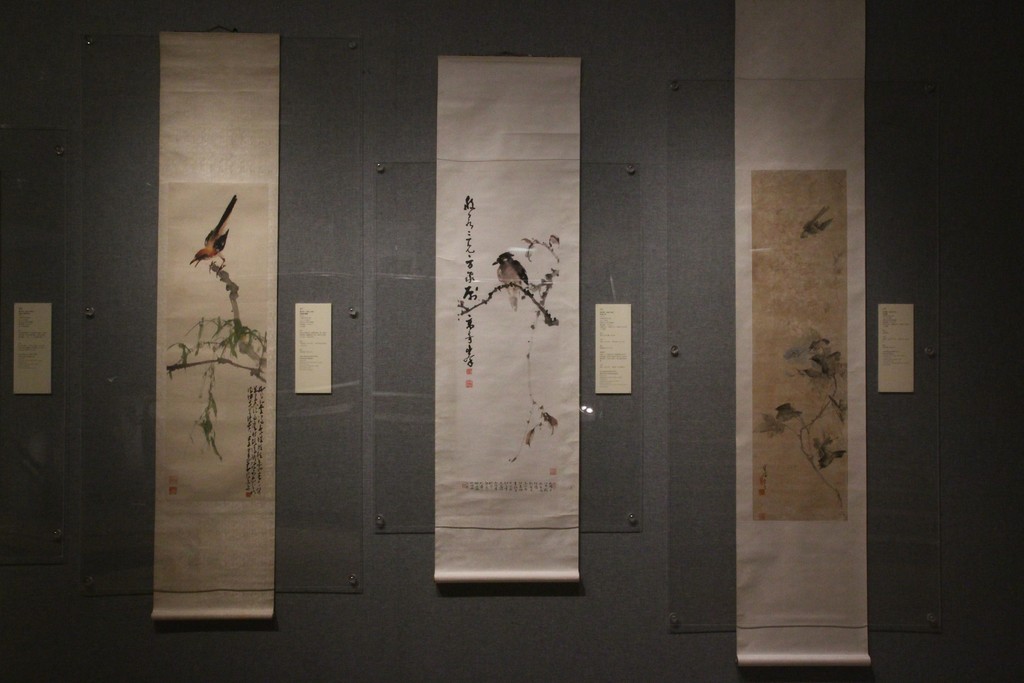 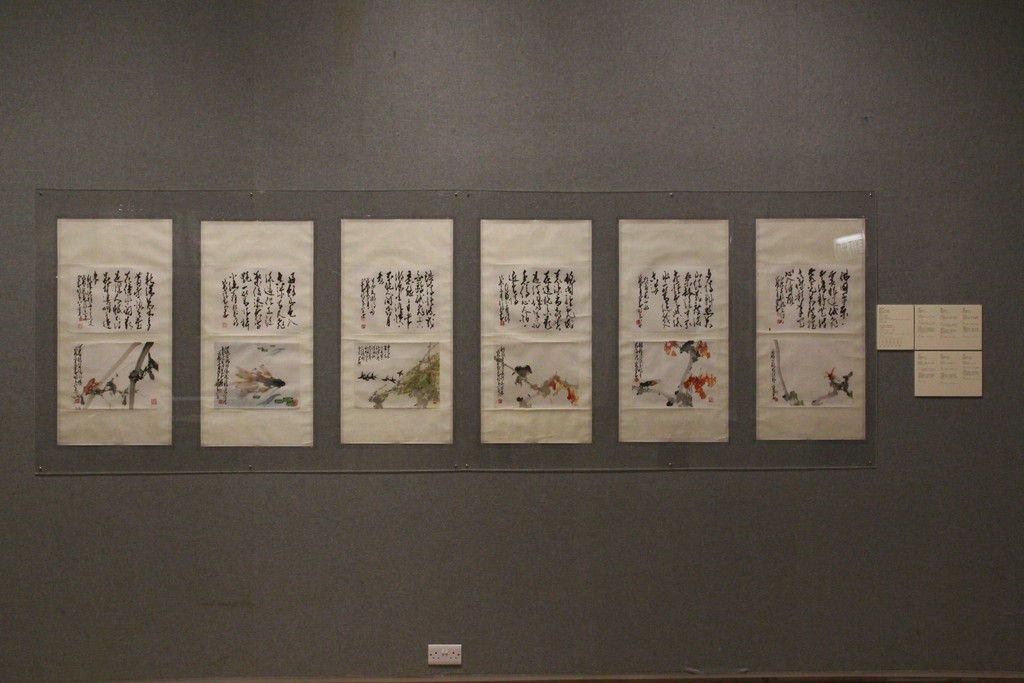 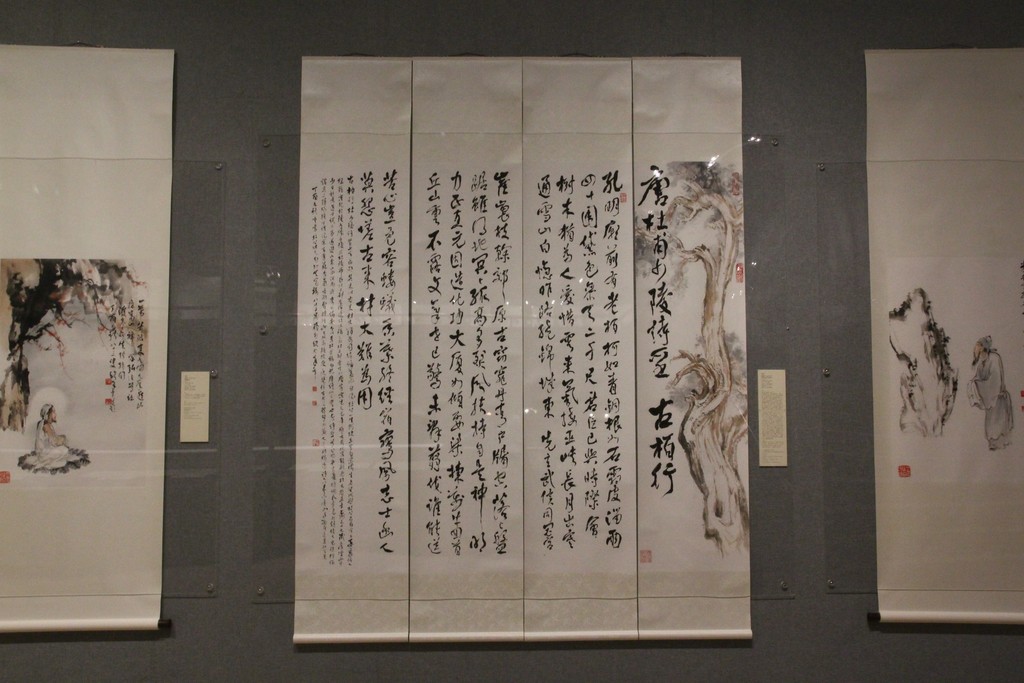 The Art Museum of The Chinese University of Hong Kong (CUHK) will present the Legacy of the Heavenly Breeze: The Art of Gao Qifeng, Chao Shao-an and Au Ho-nien exhibition, from 24 March to 13 May 2018. This exhibition will showcase 65 works of altogether 85 pieces of painting and calligraphy, in which 12 works (30 pieces of painting and calligraphy) were composed by Prof. Au Ho-nien, a representative among the third generation of Lingnan school painters, specially for this occasion and gifted to the Museum for its permanent collection. Prof. Au Ho-nien, Prof. To Cho-yee, and the Chung Chi College have also kindly lent to the exhibition 6 works by the three masters in focus, so as to enrich the range of works on display. Members of the public are welcome to visit the exhibition. Admission is free.

The Lingnan school plays a significant role in the history of twentieth-century Chinese art. Its forefathers , Gao Jianfu (1879-1951), Gao Qifeng (1889-1933), and Chen Shuren (1884-1948), regarded as the ‘Three Masters of Lingnan’, took their inspiration from the works of Ju Chao (1811-1865) and Ju Lian (1828-1904) of the Geshan school, which can be traced back to the Jiangsu bird-and-flower painters Song Guangbao and Meng Jinyi. Having each pursued their studies in Japan and learned from Japanese painting, the three Lingnan school founders innovated and ‘modernised’ Chinese painting by ‘making the best of the Chinese and Western worlds, and bridging the past and the present’. Gao Qifeng, in particular, was adept in a wide variety of subjects. His brushwork showed an exquisite vividness, especially in his bird-and-flower and animal paintings. Despite his all too short life, his work made a major impact and received high acclaim. In 1929, Gao moved to Ersha (or Napier) Island in Guangzhou for convalescence. He found a new home the year after and named it ‘Tianfeng lou’ (Heavenly Breeze Studio), where artistic gatherings with his apprentices took place. The place has since become an important symbol for the Lingnan school. The seven most accomplished of Gao's apprentices were thus known together as the ‘Tianfeng qizi’ (Seven Apprentices of the Heavenly Breeze). Chao Shao-an (1905–1998), the youngest of the seven, not only managed to continue Gao's artistic legacy, but also renewed it with modern elements and created a unique artistic style, bringing the Lingnan school to a new horizon and international fame. After settling in Hong Kong in 1948, Chao started accepting students and developed a strong following, so much so that he was hailed as a master of the Lingnan school of his generation. Prof. Au Ho-nien (b. 1935) came under Chao's tutelage at the age of 17. Building on Chao's artistic craft, Au has developed a style of his own, characterised by bold, vigorous brushwork. Excelling not just in painting but also in poetry and calligraphy, he is a key figure among the third-generation Lingnan masters. In 1970, Au migrated to Taiwan at the behest of his teacher to spread the Lingnan art to the island. For over a century, the three generations of Heavenly Breeze Studio artists have carried on their treasured tradition while exploring and breaking new ground. An examination of their works and the history thereof may provide valuable insights into the evolution of Chinese art of the period.

Painting and calligraphy from Guangdong have long been one of the key focuses of the Art Museum since its inauguration in 1971. The Museum's current collection includes a rich array of works by the late Lingnan school founders, such as Gao Jianfu, Gao Qifeng and Chen Shuren, which are crucial materials for the study of the Lingnan school. Over the last few decades, the Museum has firmly established itself as one of the main sites for the collection of and research into the Lingnan school. The Museum had its first collection of Gao Qifeng's paintings as early as 1973. Chao Shao-an started teaching Chinese painting in the 1950s at the Department of Chinese of Chung Chi College, until summer 1960 when he left for visitor positions in the United States and endorsed Prof. Au Ho-nien as his successor. Chao and Au later both took up visitorship at CUHK and generously donated their works to the University. Au were also conferred honorary doctorate by CUHK in 2016. All these testify to the three masters’ connection with the University.

The accompanying catalogue, Legacy of the Heavenly Breeze: The Art of Gao Qifeng, Chao Shao-an and Au Ho nien, edited by Dr. Phil Chan, with inscription by Prof. Au on the book cover and articles written by Prof. To Cho-yee, Prof. Leung Yuen-sang and Dr. Phil Chan, covering the finest works by three generations of Heavenly Breeze Studio, offers a glimpse into the development of the Lingnan school over a century and sheds light on important aspects of the history of twentieth-century Chinese painting.