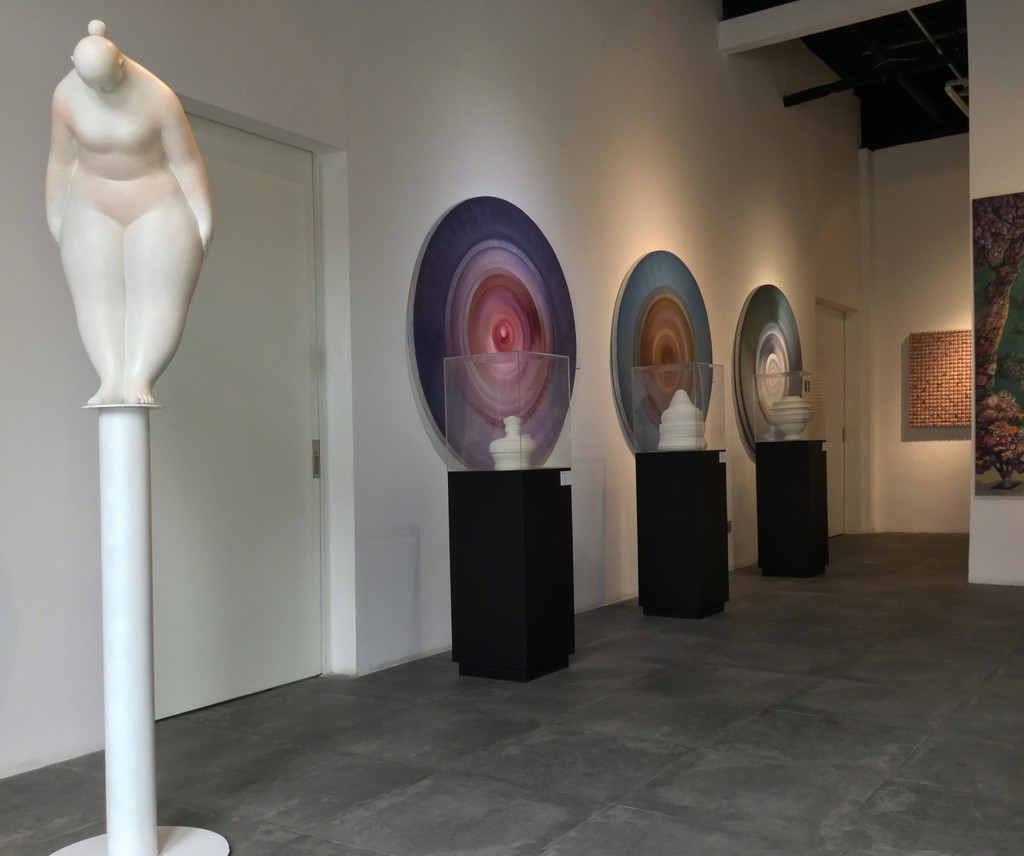 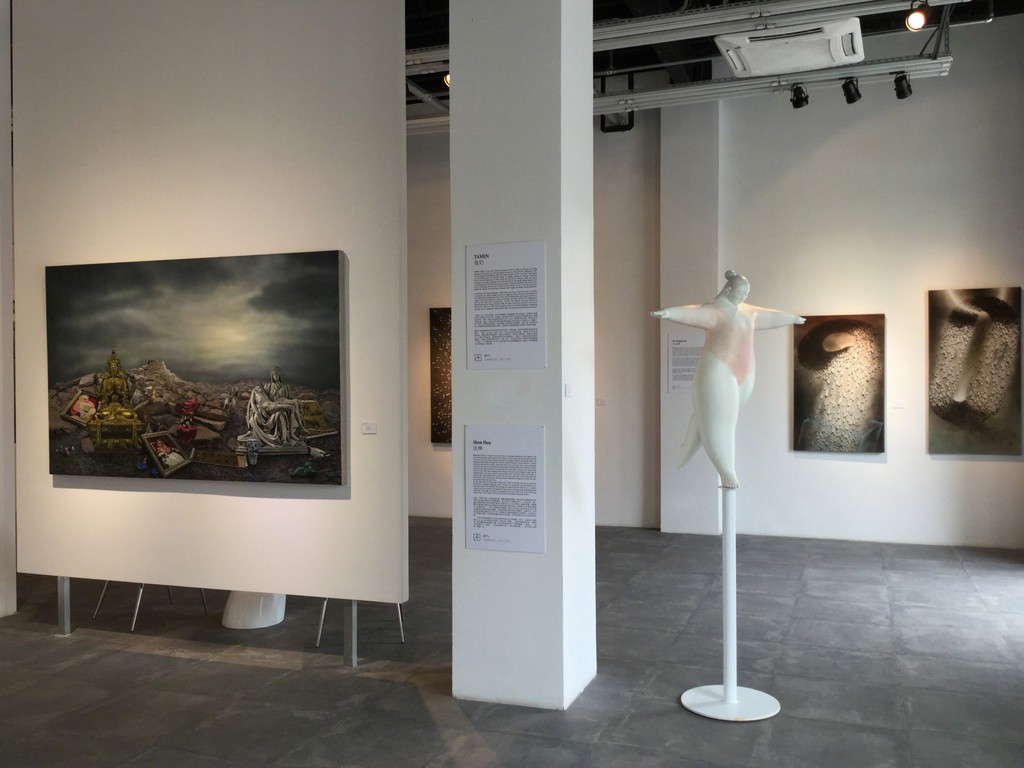 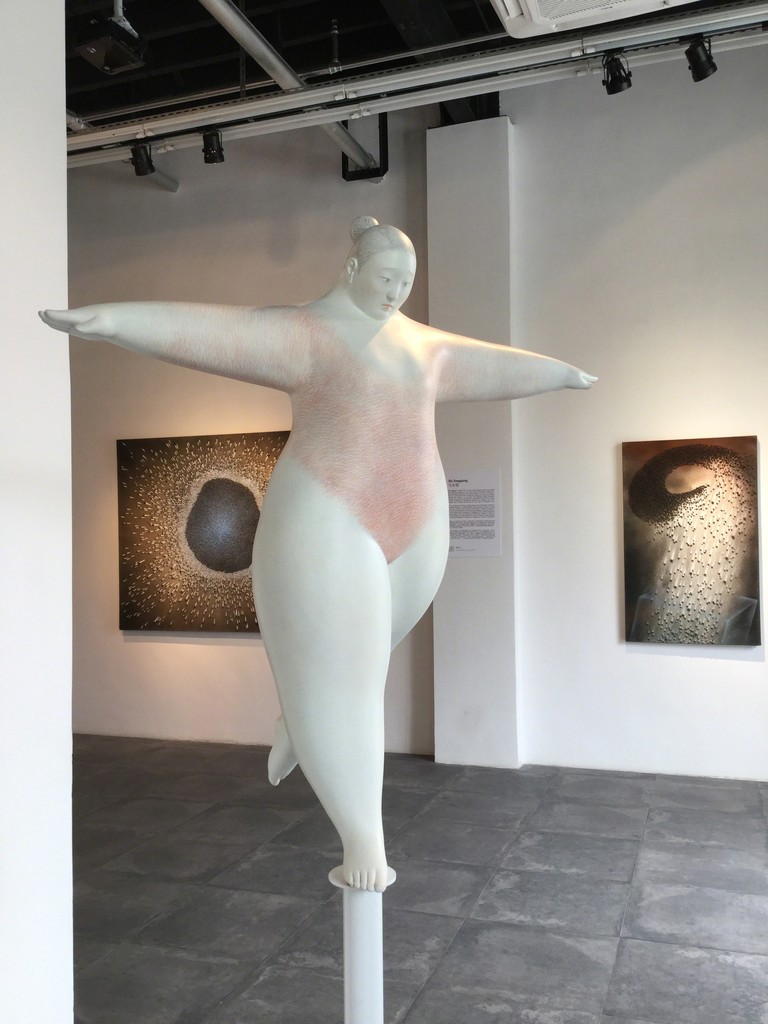 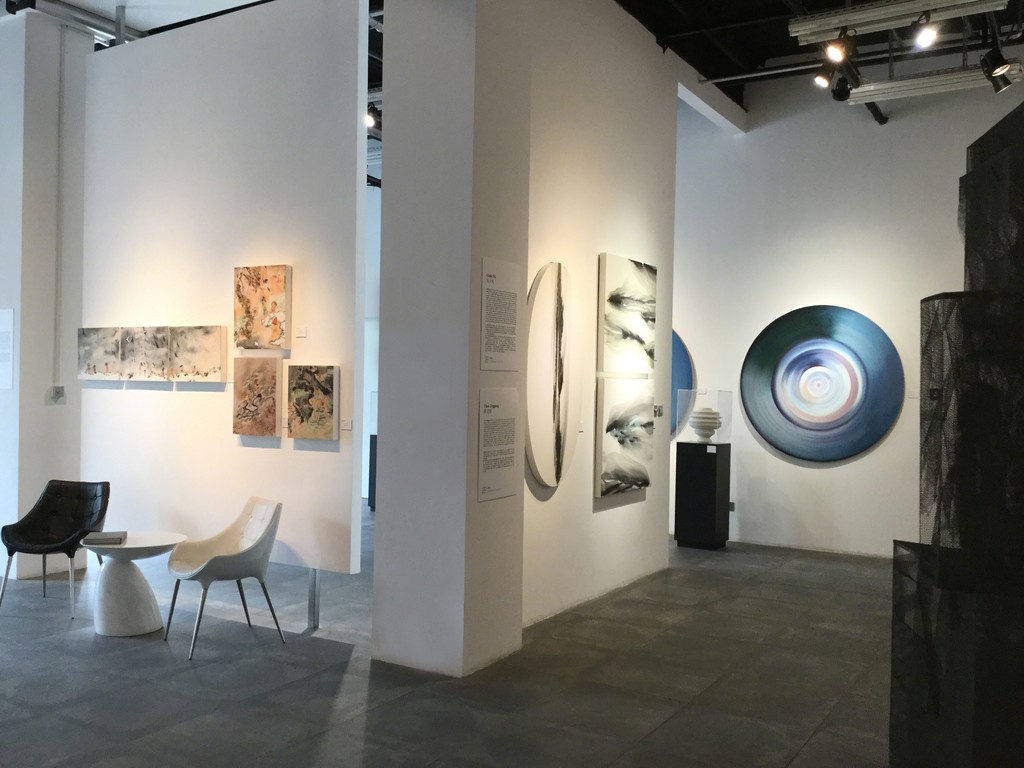 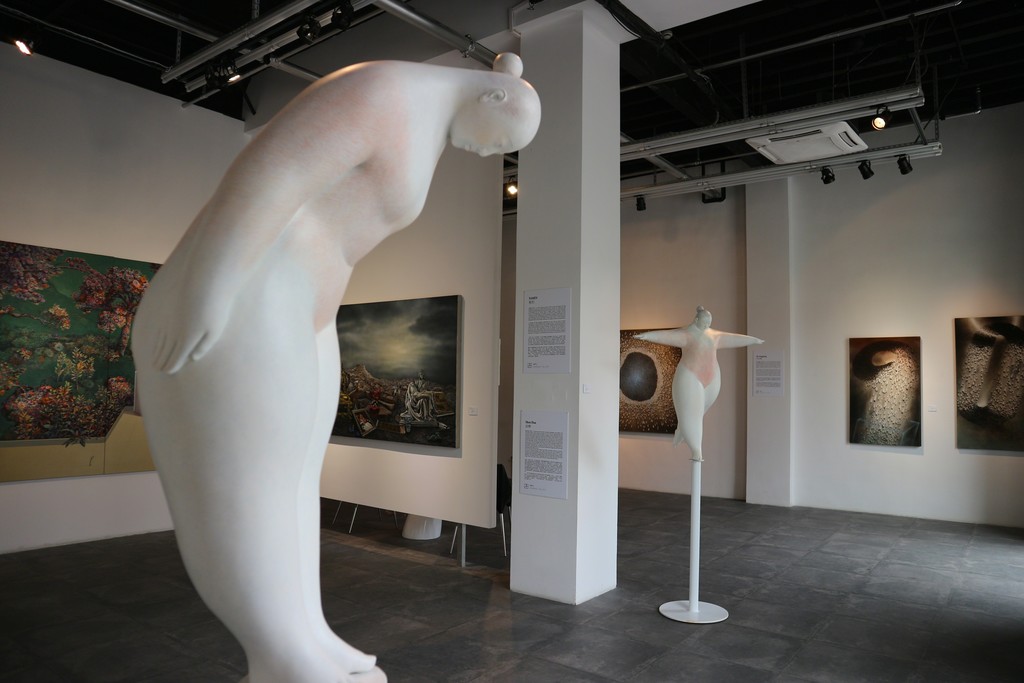 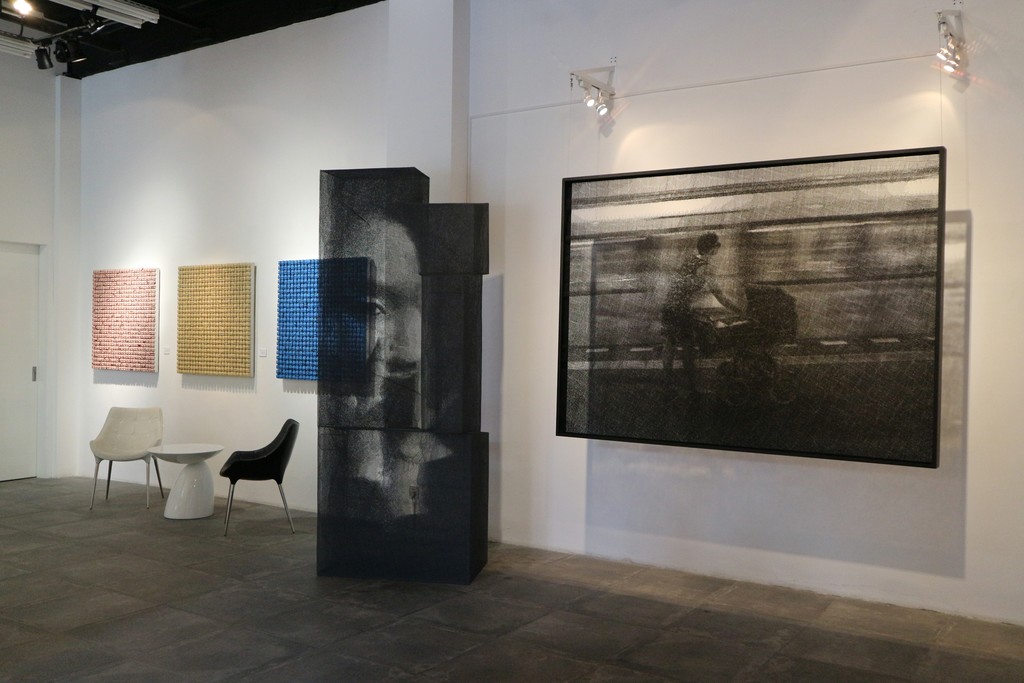 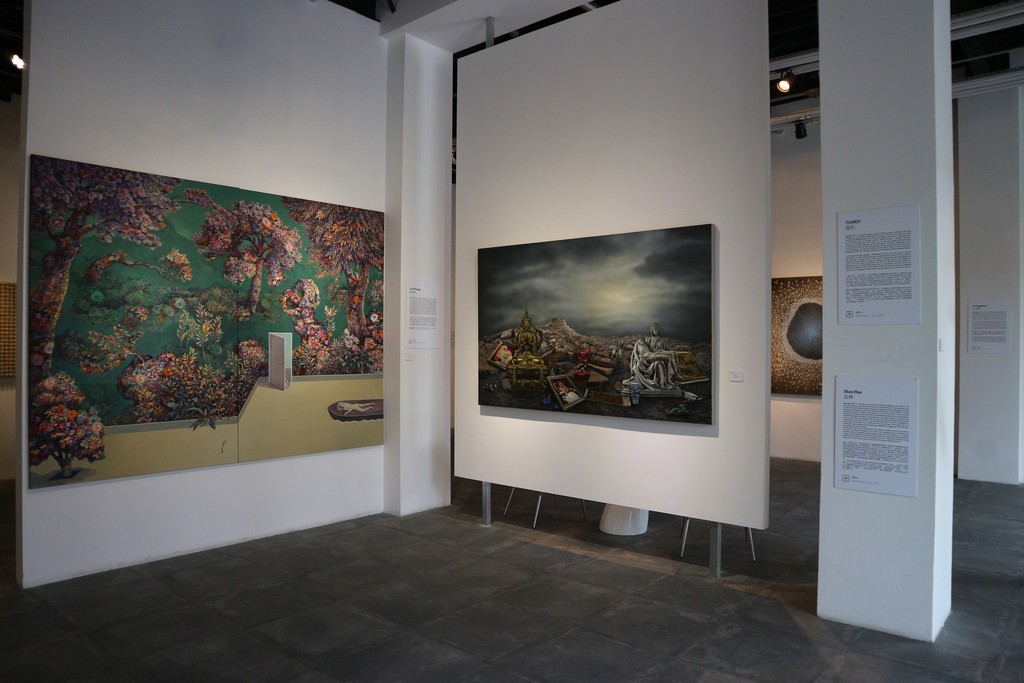 Chen Linggang (陈灵刚) is a Beijing-based artist who was born in 1978 in Jilin Province, China, and graduated in 2000 from the Environmental Art Department of the Jilin Forestry University. His textured compositions on canvas play with our understandings of heritage, language, and reading, adding a tactile dimension to the written word by using paper as the primary medium for his contemporary works.
Chen’s works come together like elaborate tapestries, grids of orderly repetition that are simple yet decoratively complex. Containing uncertainty in their structured minimalism, Chen’s works are to be reflected upon and deciphered, perhaps with each viewer reaching a different conclusion. Chen Linggang has been exhibited throughout China and Europe, including solo exhibition Between the Lines (Art+ Shanghai Gallery, 2014), On the Paper (S.T.A.R.S. Gallery, Beijing, 2013) and participation in 100 Young Artists of Excellence (Xiaopu Art Museum, Beijing, 2011) and Spicy Asian Art Exhibition (HF Contemporary, Berlin, 2011).

Cindy Ng (吴少英) Born in1966 in Macau, Ng Sio leng (Cindy Ng) graduated from Macau University majoring in Print Making. She moved to London to study etching in 1990, as a student of Bartholomeu dos Santos, the former Head of Department of Etching in the Slade School of Fine Arts of London University. While in London she began to explore Chinese Calligraphy and Painting at the British Museum, where she studied a rich collection of calligraphy and paintings, focusing on the influence of Taoism on Chinese aesthetics. The experience greatly enriched her later works.
Cindy’s major solo exhibitions include Kn Studio, Verona (Italy, 2011); Today Art Museum (Beijing, 2007); Seattle Art Museum (US, 2007); Ju Ming Museum (Taiwan, 2005); Amerasia Bank Gallery (New York, US, 2000); Taipei Fine Arts Museum (Taiwan, 1996) among several important group exhibitions. Cindy’s works are in public collections of Macau Art Museum (Macau); Guan Shanyue Museum of Art (Shenzhen, China); Today Art Museum, (Beijing, China); Taiwan Museum of Art (TaiChang,Taiwan); Bank Nacional Ultramarino (Macau); Fundacao Oriente (Macau); Jorge Alvares foundation (Portugal); Philippe Charriol Foundation (Hong Kong); Amerasia Bank Gallery (New York, US) among several private collections.
Lin Weixiang (林伟祥) is a Guangzhou-based artist born in 1982 in Guangdong Province, China, who graduated from the Guangzhou Academy of Fine Arts. Known for his unique process, medium, and style, Lin Weixiang deconstructs the original designs of patterned fabric through cloth collage and acrylic painting. The resulting scenes are splendidly narrative, incorporating figures, objects, and abstract designs with recurrent motifs such as trees, lakes, and luxuriant flora. Lin Weixiang is inspired by the landscapes of his home province of Guangdong, with its subtropical climate, dense forests, and mountainous terrain, as well as by literature, philosophy, and his own life experiences. With a sense of humor and humanity, Lin Weixiang’s recent works capture the flourishes, mystery, and energy of nature and humanity in a manner that is warm and humid, quiet and relaxed. Lin Weixiang has held solo exhibitions in Hong Kong, Shanghai, Beijing, Shenzhen, New York, and Guangzhou, and his works have been published in a number of media such as LEAP and Guangzhou’s Southern Weekly.

Luo Dan (罗旦), born in 1990 in Changsha, Hunan Province. He graduated in 2013 from the Central Academy of Fine Arts (CAFA) Beijing Sculptural Department and received post-graduate degrees from the same Department in 2016.
In his latest series of sculptures made in fiberglass and bronze, the artist presents the robust female figures. He applies simple minimalist lines to create elements that adds an enigmatic and poetic quality to his work. In the series titled Thank You, he pushes boundaries and overthrows the audience’s visual comfort zone by elegantly balancing symmetrically posed so called ‘heavy set’ performers on slim poles. He uses fiberglass as the core material to depict the spry, corpulent forms and the roundness and fullness of the statues to create a visual tension that is both heavy and light. Luo creates sculptures that defy gravity, his poetical expression leads the audience to an invisible world by giving shape to mystery.

Ma Yongqiang (马永强), born in 1971 in Yantai, Shandong province, graduated from Shandong Academy of Arts 1996, received post-graduate degrees from the Printmaking Department of the Central Academy of Fine Arts in Beijing in 2008. Like most Chinese artists, he began his learning and creation from realistic paintings. He focused on oil and water color paintings featuring landscapes and rural areas. Thanks to the experience of learning and creation in the Central Academy of Beijing, he broadened his horizons and completely cast off the academic style of realism and entered the vast world of contemporary arts.

He has changed his style from classical painting to the experimental artworks of surrealism resulting in a complete different artistic language presented in “Flying Sand” series. His new series is inspired by the tendency to capture the rhythm of the beach, earth shaking, flow of the water, meteor falling and movement of the star in mixed media on canvas paintings. Ma Yongqiang has been exhibited throughout China mainland, Taiwan and Hong Kong including solo exhibition in Today Art Museum Beijing, and a group exhibition in Lotus Art Museum Beijing, Shanghai Art Museum, Shandong Art Museum and Qingdao Art Museum among others.

Seungmo Park (박승모) is a New York-based Korean artist whose works straddle the line between sculpture, installation, and portraiture. Known for his work with metal wire and stainless steel wire mesh, his MAYA series expresses the illusionary image as exposition of consciousness and reality. Taken from the Sanskrit word translating to ‘illusion’, MAYA is influenced by Park’s time in India and his dreams. Using models that resemble a woman he once met in his dreams, portraits are projected onto layers of wire mesh that are then strategically and meticulously clipped and snipped away at. With this subtractive technique, Park creates portraits of physical and visual depth, with each resultant work inches thick, with further dimensionality created by playing with light and shadow. Calm in its serenity of image, materiality, and surface, Seungmo Park’s works are meditative and multilayered visual experiences.
Seungmo Park’s works have been exhibited in solo exhibitions, group shows, and art fairs throughout the United States, United Kingdom, Korea, and Taiwan. Notable exhibitions include Meticulously Snipped and Wrapped (Michigan, United States) and Korean Eye (Seoul, New York, Abu Dhabi, and London).
Shen Hua (沈桦) is a Chinese artist who works in painting, installation, and sculpture. His works often employ a solid command of medium to create a sense of social perspective, with a previous series of works focusing on the figures of migrant workers, employing motifs and techniques that bridged the gap from Chinese Socialist Realism to Rustic Realism. Creating a dynamic forcefulness of reality, Shen Hua’s latest series of Portrait oil on canvas paintings maintains the premise of reality abstracted through the absolute distortion of iconic portraits, transforming images of dictators, personalities who have shaped nations, into hypnotizing circles of color. His visual language often borrows from keen psychological insight and an understanding of the many roles in society. Within each canvas, the artist’s personality seeps through, a personality that is acutely self-conscious and aware of the things that have informed its scope of experience. This awareness is distilled into images that reflect the many personalities that make up society.
In 2007 Shen Hua won the bronze medal at the Today Art Student Annual Art Awards at the Today Art Museum (Beijing), and in 2006 he was among the Top 30 Finalists at the Sovereign Asian Art Foundation (Hong Kong). His works have been featured in a number of group and solo exhibitions throughout Europe, China, and Hong Kong, including notable exhibitions The Image of the Body (Chongqing), From the Countryside to the City (Hong Kong), Voice of the Unseen (Venice, Italy), and the 2010 Busan Biennale (Korea).

TAMEN (他们), is an artist collective formed in 2003 by artists Lai Shengyu and Yang Xiaogang, who were born in China’s Hunan Province in 1978 and 1979, respectively. Both received post-graduate degrees from the Central Academy of Fine Arts in the Department of Printmaking and are currently based in Beijing working at Beihang University (BUAA) in the Department of New Media Art. The duo has traveled widely and rejects contemporary society’s infatuation with the individual by seamlessly collaborating on and co-painting each work. They have gained acclaim in China and abroad for their Same Room series of paintings, and have since shifted towards exterior scenes in natural landscapes, displaying Western-style painting techniques and thought-provoking conceptualizations.

Lai Shengyu and Yang Xiaogang’s collaborations are part of the new trend of Chinese contemporary art where thought exercises are staged on canvas. Tamen has held numerous solo exhibitions in Beijing, New York, Seoul, and the Netherlands, and has participated in a range of art fairs including Art Cologne, Art Beijing, Art Dubai, Art HK, SH Contemporary, and the New York Asian Contemporary Art Fair. The collective has been featured in publications such as Young Chinese Artists: The Next Generation, and their work can be found in the collections of the Central Academy of Fine Arts Museum (Beijing), Guangdong Museum of Art (Guangzhou), White Rabbit Collection (Sydney), and Essl Museum (Vienna).

Zhang Wen’s Coming of Age series is about the search for an adult identity. Her paintings are peopled by children and teenagers, smaller adults negotiating between the childhood world and the adult world. She captures a time where innocence gives way to the social expectations and norms of growing up, where choices have to be made to accept a socially constructed identity, or to construct a personal sense of identity. Zhang Wen’s works are filled with the nostalgia, experiences and revelations inherent in growing up, and it is almost as if through her art she can hold off that moment when the innocence of childhood is broken by the realities of adulthood. Her works carry a wistful wisdom; a knowledge that paradoxically, innocence can only be recognized retrospectively, from the vantage point of experience.

Zhang Wen’s brushstrokes are simple and forthright, a style that amplifies her narrative about childhood innocence. Her use of colour, tonal variation and colour saturation is reminiscent of traditional Chinese ink, and her exceptional composition and perspective reveals an uncommon intelligence. Her art has the distinctive feel and atmosphere of Chinese ink, yet at the same time is distinctive with her own intimately personal and experimental language.