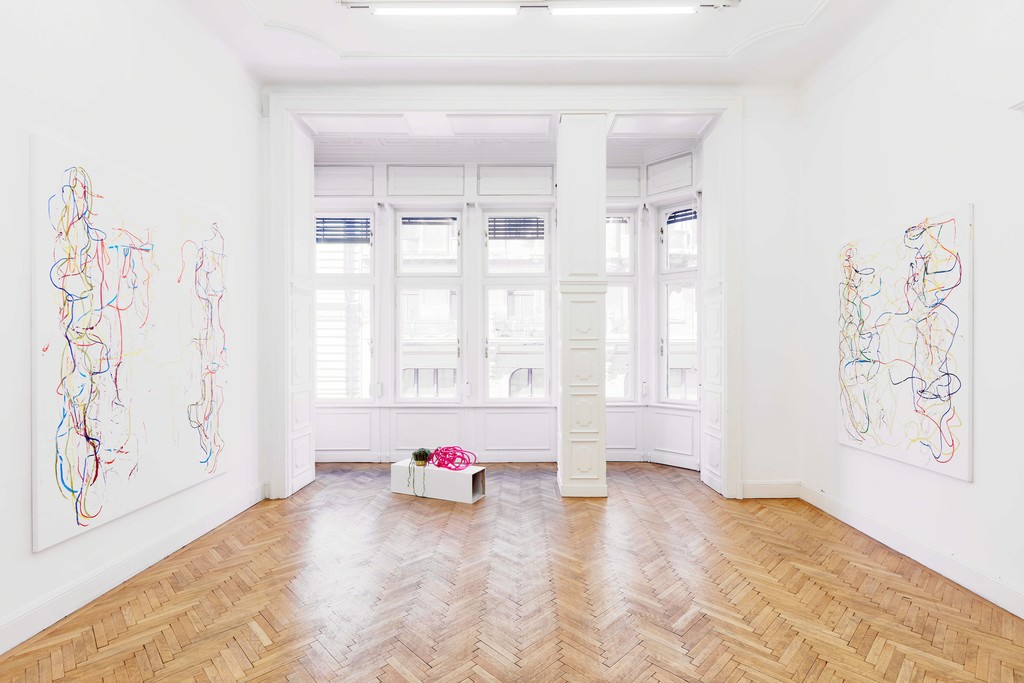 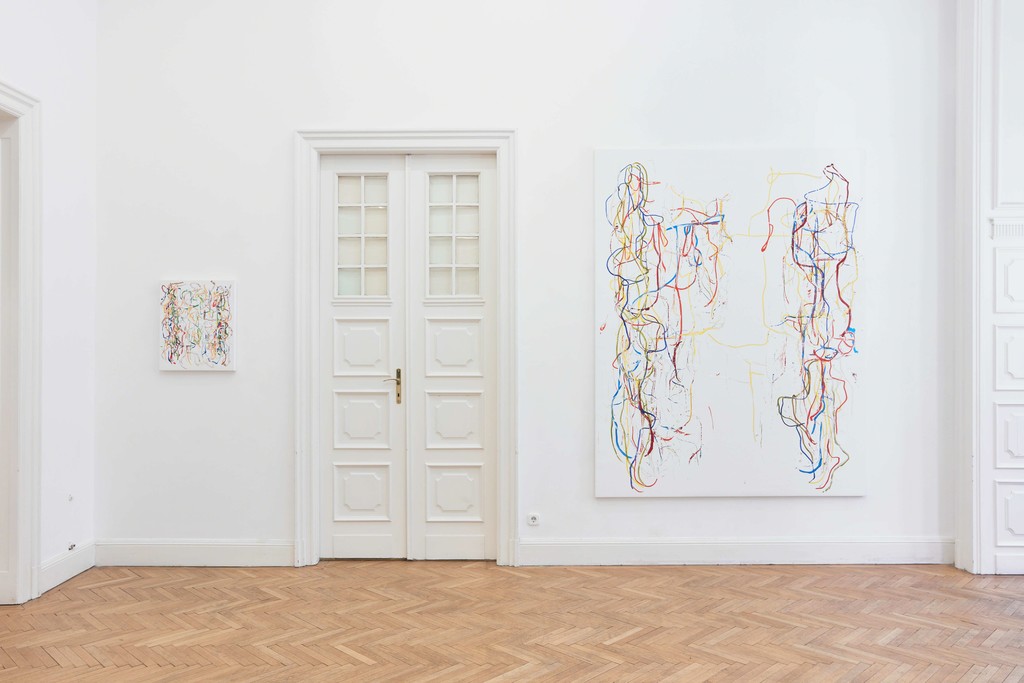 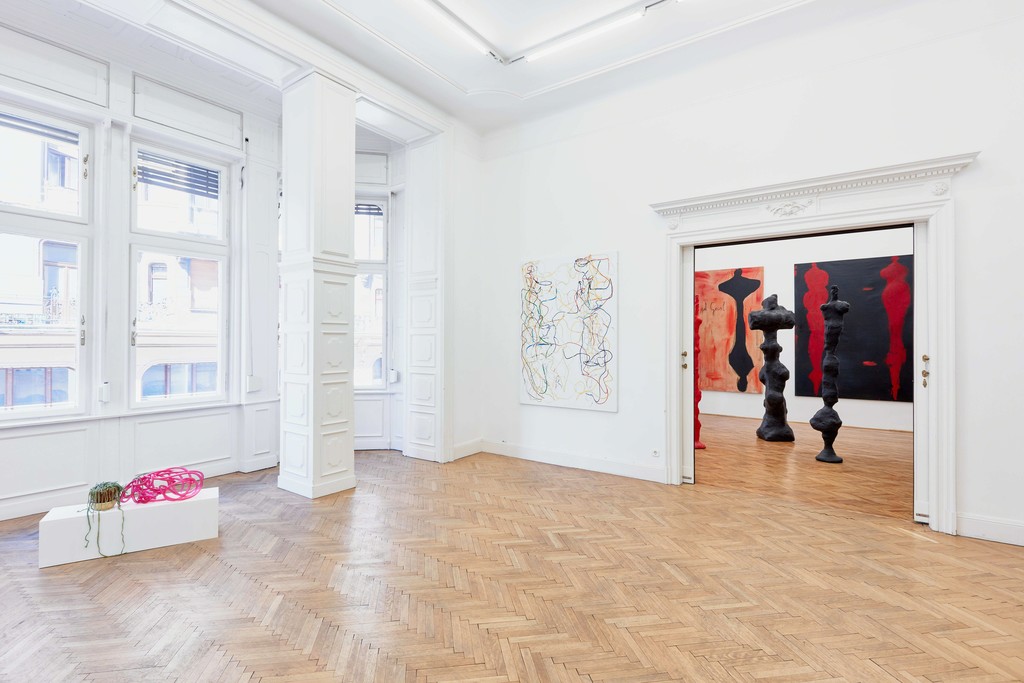 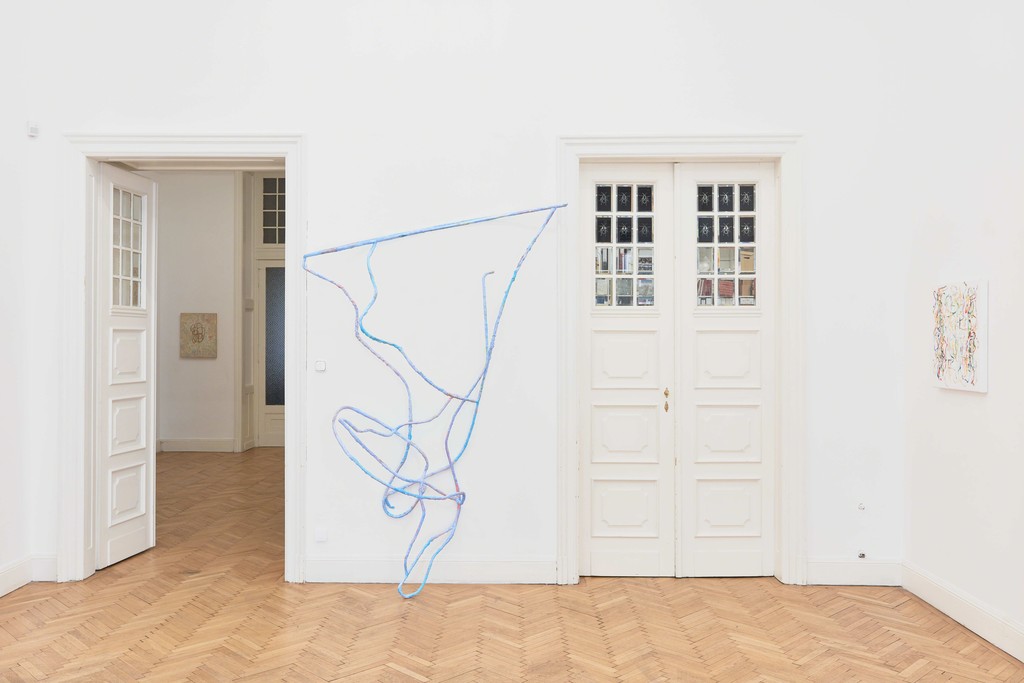 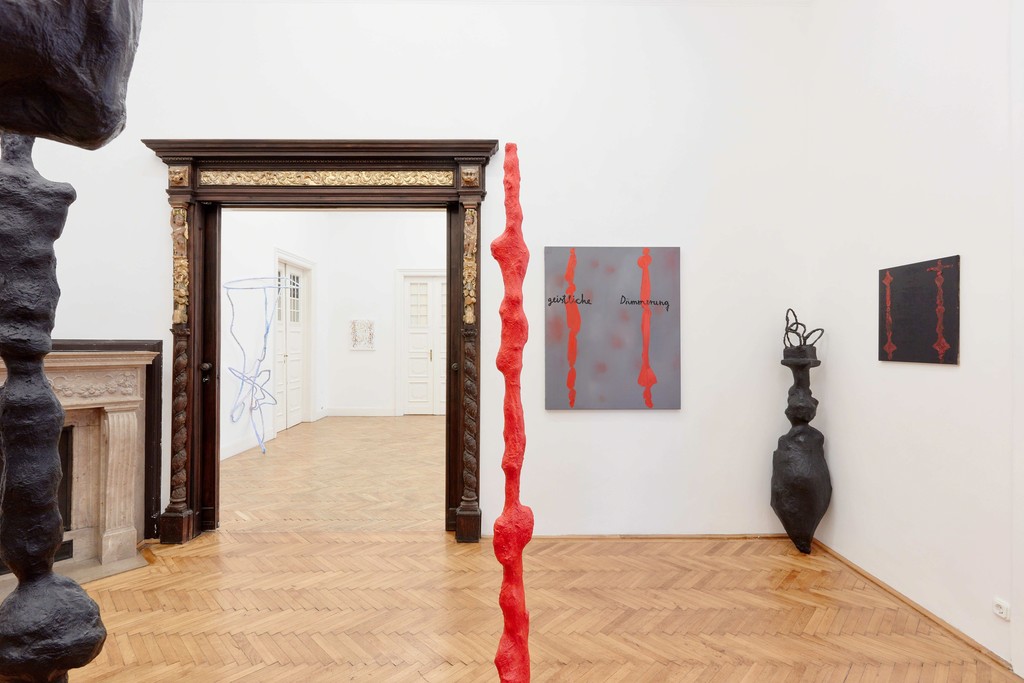 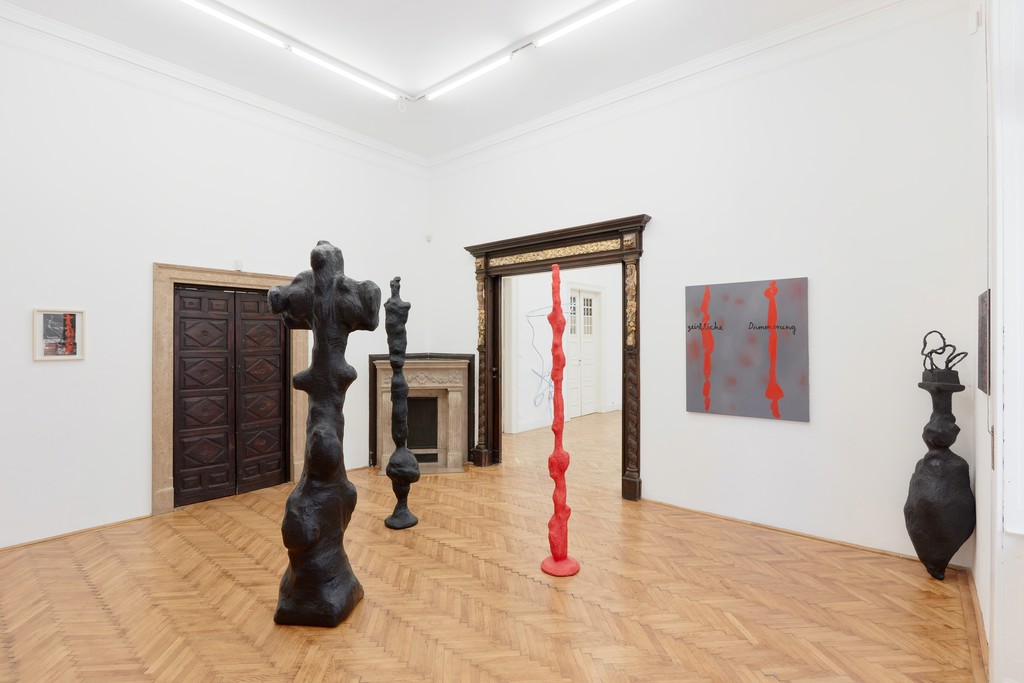 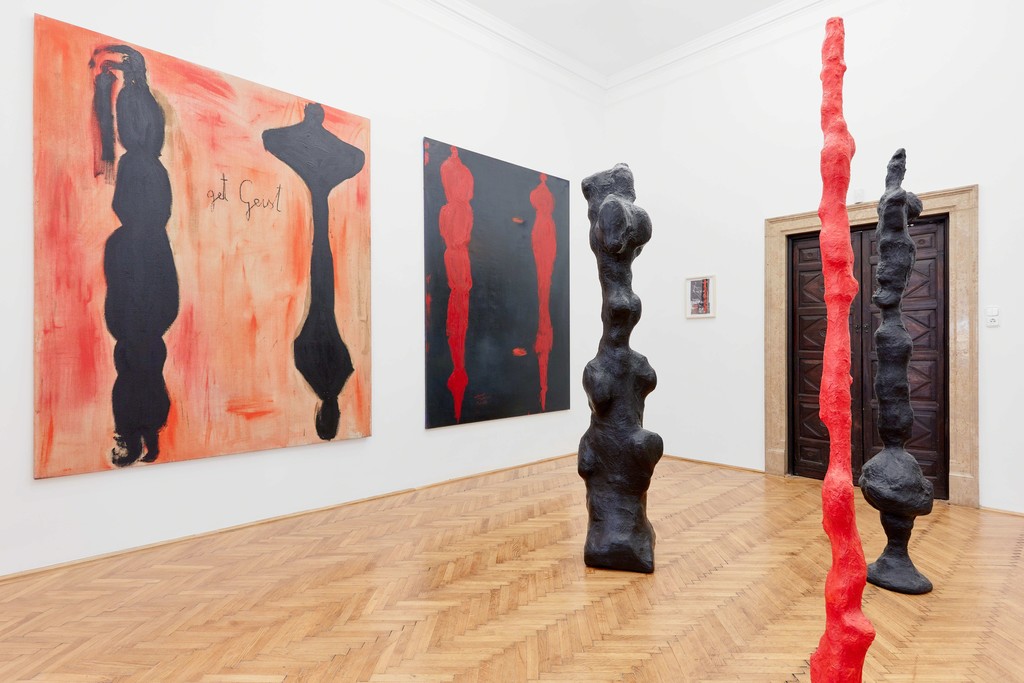 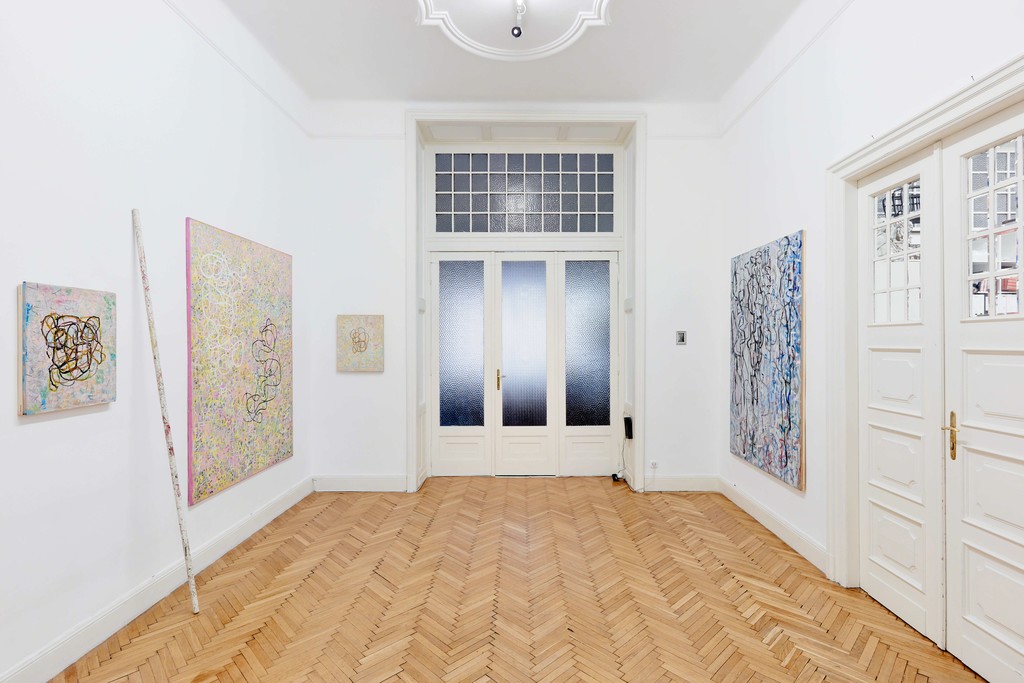 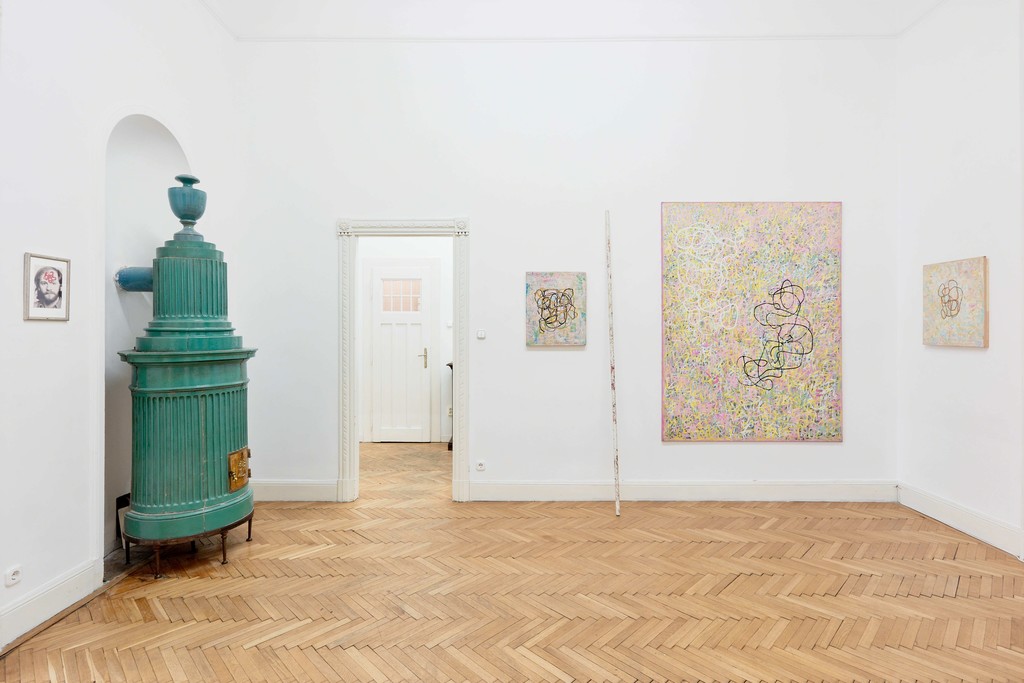 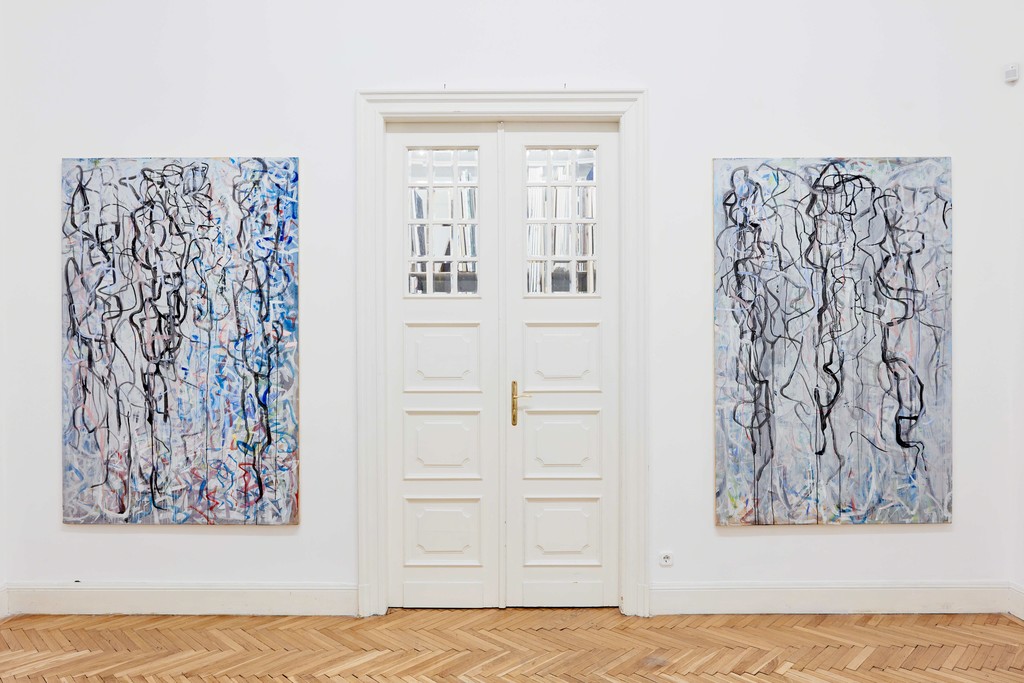 Art+Text Budapest is delighted to present a solo exhibition on one of the greatest masters of metaphysical Hungarian painting, Tamás Soós (1955).

According to the distinguished German Art Historian, Hans Belting, „»Melancholy« emerges again and again as a multilingual cantus firmus in the oeuvre of Tamás Soós.” When in the 1990s Soós entered his greatest period marked by the semantic range and formal properties of melancholy, human figures became palpable in his vertical, amorphous shapes – be that in the form of painted symbols or black papier-mâché sculptures.
It was at this point, that a systematizing, leitmotif became tangible in Soós’s work based on existential cogitations or, rather, engaged in a constant dialogue with its own thoughts concerning the human condition. As László F. Földényi has written in the artist’s catalogue Melancholy (2005), even the large-scale Melancholy paintings of the 1990s had figurative potential, since “those unusual configurations remisicent of columns of smoke, which were the »signature« of Tamás Soós for more than a decade, can be regarded as obscure figures,, human forms lost in fog, as much as they can as sculptures, immovable masses.”
Soós’s art grows in an organic manner defying single-word definitions. Besides exploring his new-found main theme relating to melancholy, Soós kept creating new series of works, after which, in 2008, he proceeded to organise his expanding painterly oeuvre in a new, grid-like visual scheme. This accommodated a range of works: cross shaped paintings invoking the radicalism of Suprematism (The Melancholy of Order); timeless realist portraits floating in homogenous space (Realistic Melancholy); colourful abstract line-tangles written on white paper (Line of Existence); and earlier pieces, dating from different periods in the 80s – from the first works on paper conjuring up abstract jungles (Substance), through post-modern compositions of new painting (Mythology), to projections of inner landscapes billowing with ghostly lights (Metaphysical landscapes).

Achille Bonito Oliva, legendary theorist of the Italian Transavaguardia, noted how profoundly Soós’s oeuvre is influenced by the image of the embodied spirit: “the art of Tamás Soós presents the quiet external manifestation of the inner world within the kind of conscious person who knows that, with his own shapes, he can inhabit the world of shadows.” The potentially several decades-long process through which individual formal components find their places in the visual edifice of Soós’s personal, “individual metaphysics” can only be defined as unique.

Art+Text’s exhibition entitled Præfiguratio examines another web of connections in Soós’s oeuvre, that which is based on the smoke-like, amorphous figures defining the Melancholy series. It is the quasi-subconscious origin of these male and female totems that the exhibition seeks to investigate. Indeed, in the contrasted tumbles of line which appear on these early works of abstract gestural plains, sprawling like lush jungle vegetation, a blanket of leaves, or pouring rain, one can already see vague lines of the human figure which were to emerge at a later stage in Soós’s work. As if these forms represented some sort of Platonist shadow, or an archaic antetype (a prefiguration) guarded in the subconscious. The same figures appear – or, rather, disintegrate – in the red-yellow-green-blue lines meandering on the white surface of the paintings which constitute the Line of Existence series dating from recent years.

The exhibition unveils an imaginary thread in the oeuvre of Tamás Soós, thereby modelling the artist’s journey of intuitive revelations. The selection comprises the previously never exhibited, early Substances, several important works (paintings and sculptures) from the Melancholy series, one completely new and a few older examples (including a sculpture from 1982) from the Line of Existence sequel, as well as works of photoconceptualism and a herald of the impertinently grotesque, most recent objects.