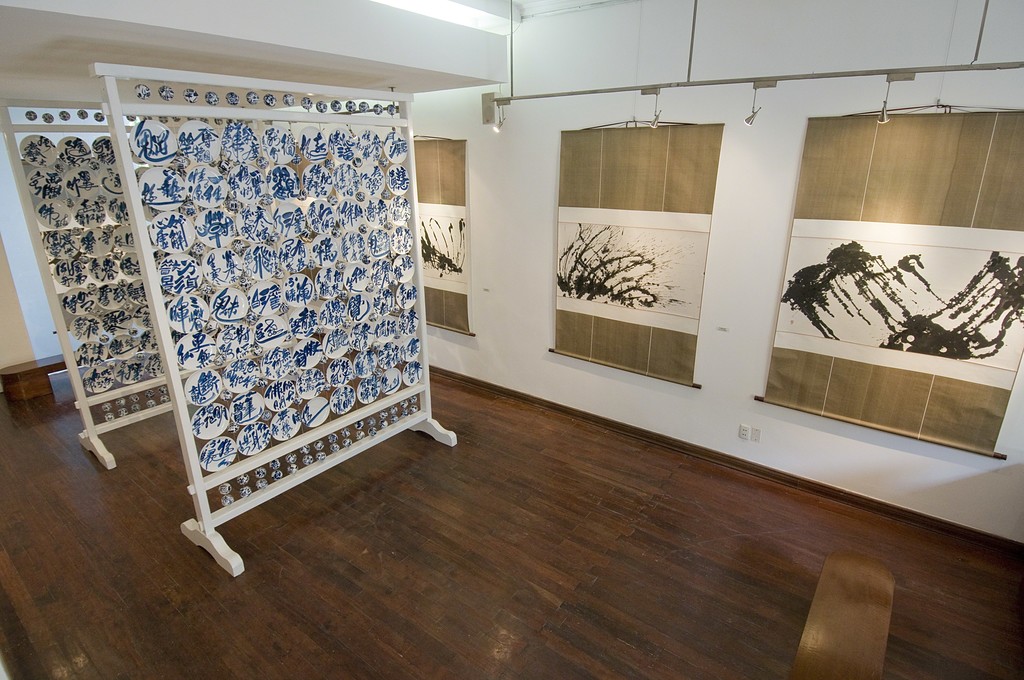 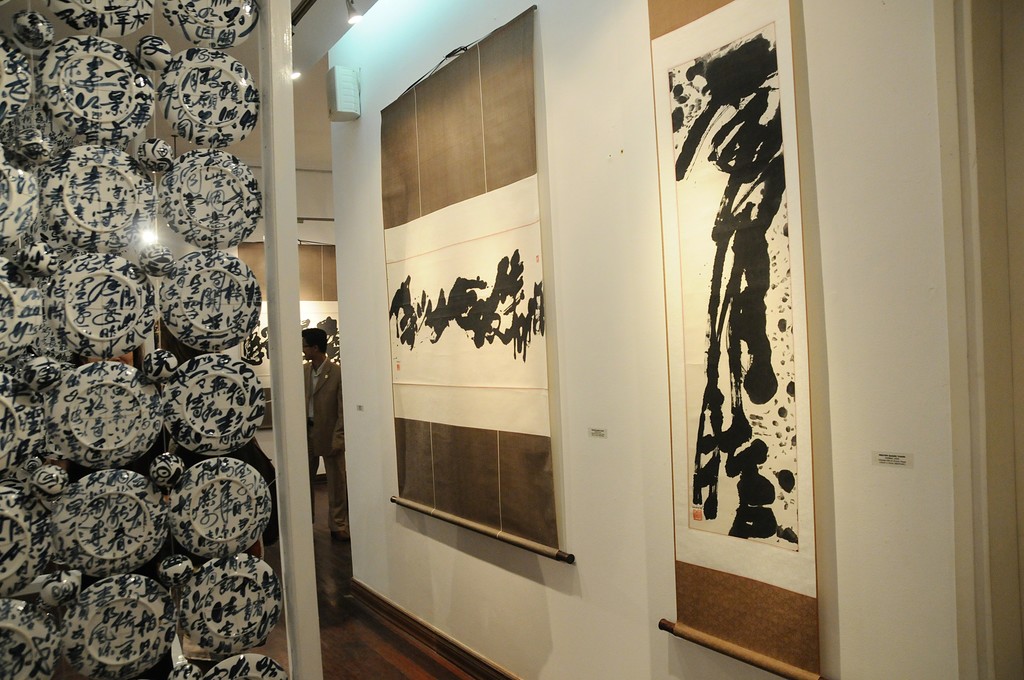 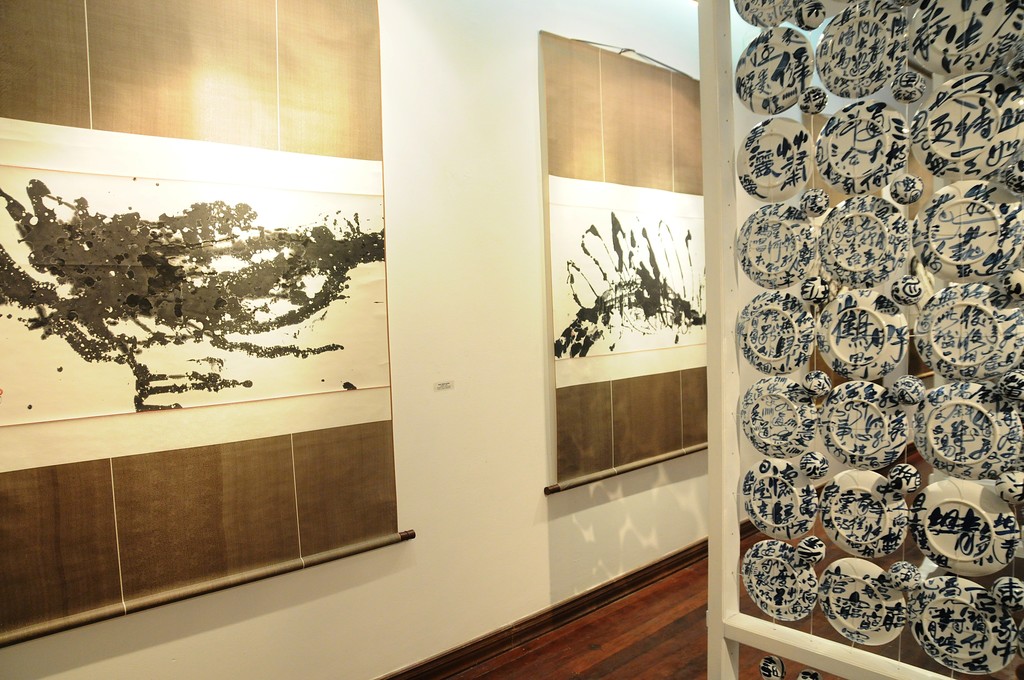 Zenei, a group of five, young avant-garde calligraphers, is forging a new path. In an act most easily understood as the merging of impassioned visual expression with a nearly extinct script, the Zenei group elevates both art and history to a new level of experience.

Nom, the ancient script of Vietnam and once the language in which all Vietnamese literature, philosophy and country records were recorded, is nearly forgotten. Today few people remain who can both read and write in Nom and five of those people have miraculously banded together to create Zenei. Through the conscious labor of accentuating artistic impulse with Taoist thought and action the Zenei group carries the Nom language forward from its place in history into the present moment.

By composing and decomposing, creating and composting, the Zenei group strips the language to its essence, creating a living, visual experience with indiscernible form, sound or meaning. Each of the five artists in Zenei have their own unique way of relating to this language in order to make it live again. Mirroring life itself, each approach emerges from a different seed and viewpoint.

Tran Trong Duong, whose pen name Chuyet Chuyet means the Humble Man, erases the original language’s meaning through the process of reimagining the character in his work. To Duong the important thing is the spirit of the character not its literal transmission. In the free brush style reminiscent of Jackson Pollock Duong preserves the spiritual root of the word but all traces of meaning have evaporated.

Nguyen Duc Dung, or Thien Hoa (Celestial Fire), concentrates on the nature of light embedded in each stroke. By focusing on the character’s movement between light and dark, Dung pursues a primal understanding of the balance struck between the two, it is a balance ultimately of meaning measured against non-meaning. Le Quoc Viet says of Dung’s work, “It is in the middle of keeping the character or erasing the character, it stands between. Dung still wants to keep the character but can’t resist the urge to erase it. He wants to talk words but can say nothing.”

Nguyen Quang Thang, or An Xuyen (the An River), writes solely in Nom characters. He writes sentences in Vietnamese and thinks about the content before he starts to paint but when he starts to write he forgets all. Only when he forgets all – empties the mind – can he come and go – the mind is open and free. He follows the characters, not for their originating force but for artistic impulse which they carry towards him. Like a man following a running stream Thang treasures each character’s intrinsic beauty.

Pham Van Tuan, or Thien Phong (Zen Wind or Zen Manners), has three large works in this exhibition – in each piece the strokes are equally dominant. Tuan concentrates on illuminating the relationship between black and white. Among the five artists Tuan is very weak in his body but when he writes it is very strong, he works against his body. His energy comes from God and a belief that a strong mind creates the strong stroke.

The work of Le Quoc Viet, or Ai Chau, Cuu Chan Quan Nhan (District Man), has everything – he has returned to the starting point. In this installation Viet uses Chinese, the language from which Nom was derived. Many people around the world can read the Chinese characters and yet often, even though Vietnamese and Nom both grew out of Chinese, there is, when comparing the two, something indecipherable. It is not as if one can read Chinese one can read Nom. From a point of origin many forms are born. In his installation of ceramic plates and balls you can read the characters clearly. This work can move and make sounds. The balls are placed on mirrors so that they are transitioning all the time. This movement creates thousands of images and makes a new modern language of its own. The language multiplies and becomes unreadable in its many fractured reflections.

To this group of young artists, “Wordless” means that which cannot be said, that which is both before and beyond the specificity of naming. To be without words is saying nothing and saying everything.

Art Vietnam Gallery is privileged to present this extraordinary body of work by these young scholars whose visual expressions elevate the body, mind and spirit beyond words to a mind to mind transmission.