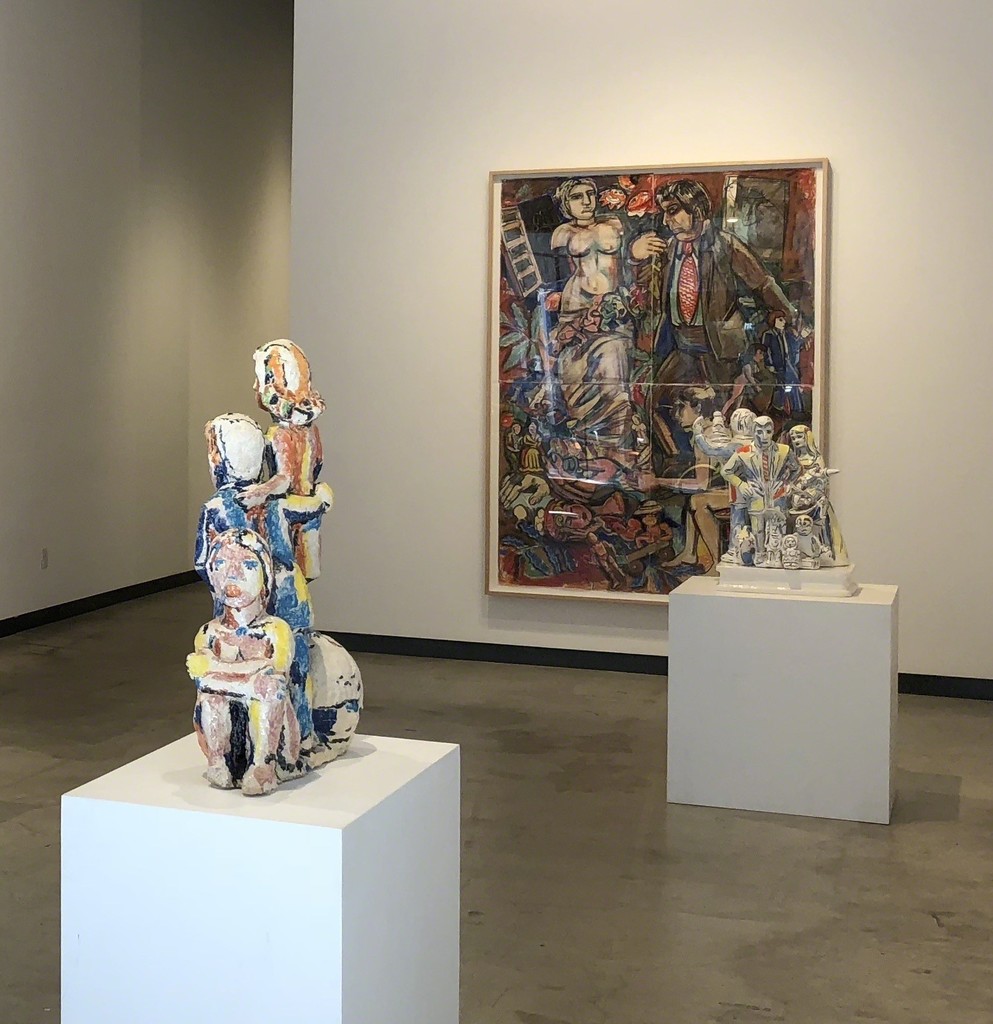 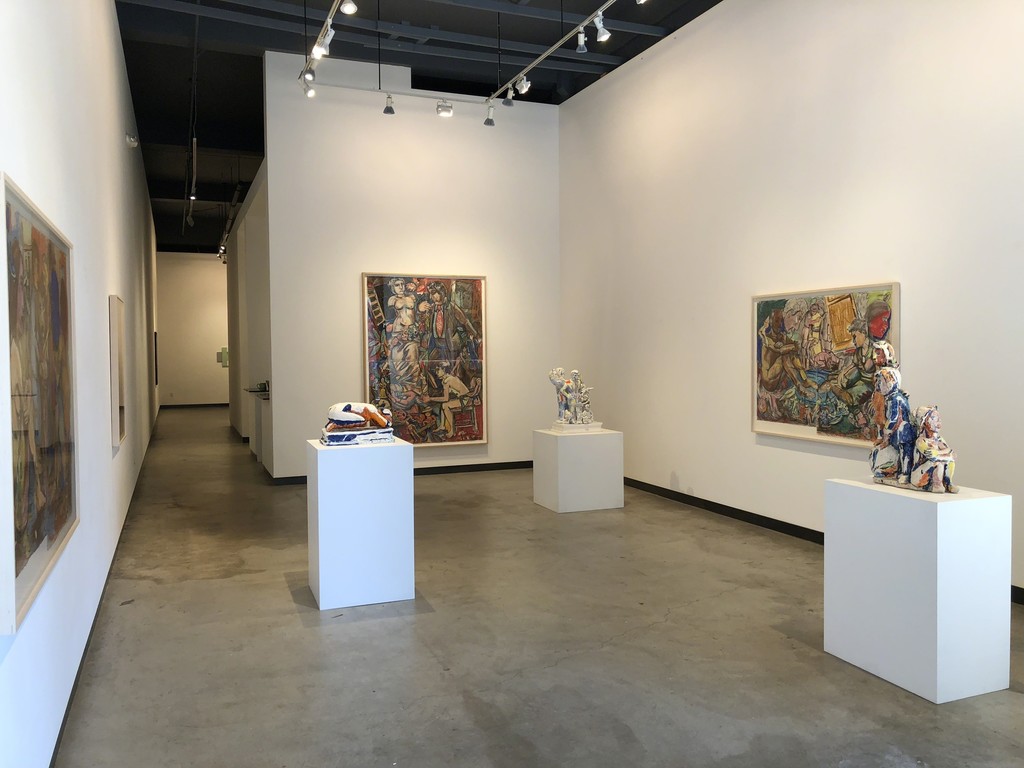 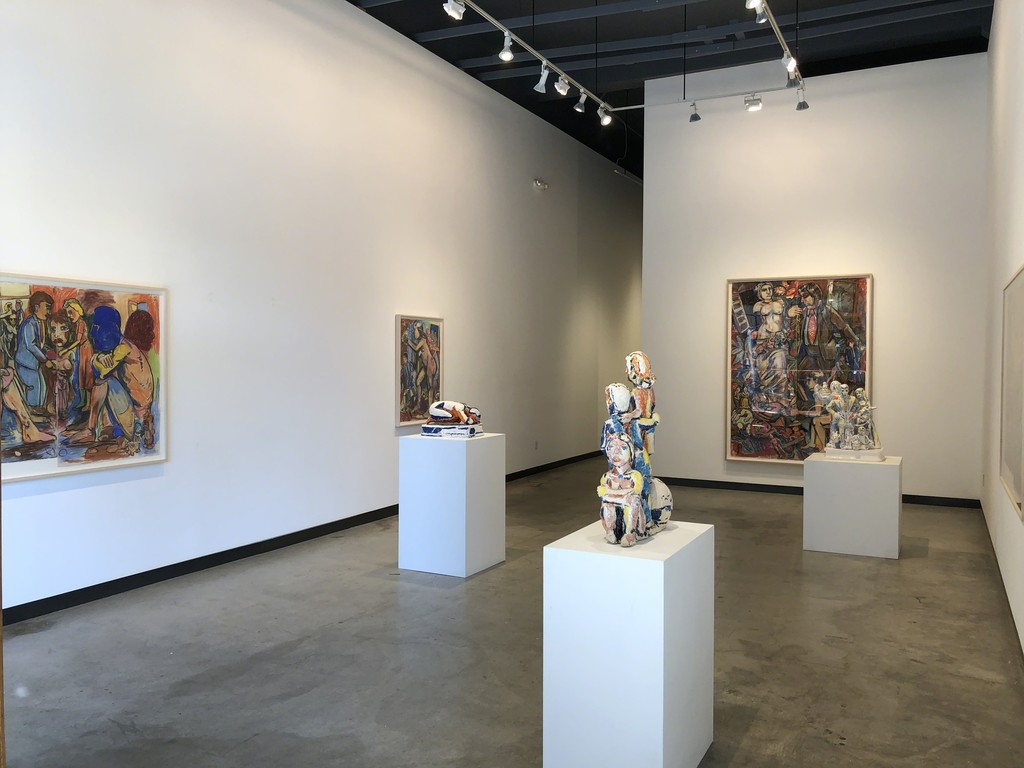 James Harris Gallery is pleased to present our first solo exhibition of work by Viola Frey (1933-2004) entitled “The Future of Yesterday.” This influential artist was deeply committed to her art practice for over fifty years and was instrumental in cracking the barrier between craft and fine art. We are honored to be working with the Artists’ Legacy Foundation who have stewarded Frey’s work and legacy since her death.

Many people think of Viola Frey as a maker of ceramic objects. Formerly trained as a painter, she studied with both Richard Diebenkorn and Mark Rothko, Frey’s practice incorporated painting, drawing and even photography. Frey was a cultural observer and her work reflected how she interpreted the world. One core theme explored throughout her career was the social commentary on the power structure between male and female and the roles they played during her lifetime. This investigation is prescient today with the continued struggle for equal rights and the upward path to break the glass ceiling. Her work was strongly influenced by her passion for art history, and her resulting imagery can often be viewed through this lens.

“The Future of Yesterday” brings together six drawings and four sculptures. It spans a period of her work from 1975 to 1997 which illustrates her signature iconography and reflects on the many themes found in her rich production as an artist. Through these works, we get a glimpse at a voice that combines visual poetry and social commentary. A vision that conjures up narratives and anecdotes from popular culture and history. The drawings and sculptures though from the past lead us on a journey into the future.

Viola Frey’s drawing practice was consistent throughout her career. She would often turn to drawing while the ceramics in her studio were drying or being fired. She worked often with live models, using some for many years. The models were rendered during sittings but afterward is when she brought her drawings to life. Using brightly colored pastels, her male and female sitters come alive surrounded with images of the figurines she collected at the Alameda Flea Market in Oakland, California where she lived, taught, and worked from 1975 to 2004.

In these lush works on paper, windows and doors act as portals or reference views into the artist’s mind/world. Her Fauvist palette of bright red, blues, pinks, oranges, green and yellows activate the surface in a maelstrom of color. The models or the figurines were often posed to reference familiar imagery of art history. Frey not only worked on single sheets of paper but often combined them to make monumental drawings as seen in the four sheet polyptych “Untitled (Greek Hag, Brown Suited Man)” from 1990 which spans 83 x 59 inches.

In the diptych titled “The Discussion I” from 1994, the composition echoes composition of Manet’s “Le Déjeuner sur l’herbe” from 1863. Frey rendered one of her favorite male models and provocatively substituted him for Manet’s female figure on the left. He sits on the ground, arms crossed and placed on top of his knees gazing out at the viewer. Behind him, the artist has drawn one of her signature large scale men, suited in blue, bent over, his mouth open with a speech bubble containing images of men wrestling or perhaps fighting. Sitting opposite the nude male on the right is clothed female figure possibly a self-portrait. The raised right leg and left arm on the ground also mimics Manet’s composition. This richly depicted scene beautifully illustrates Frey’s subtle comments on gender. Her male figure appears vulnerable while her female is poised and in control. Other signature motifs are found in this work: above the female figure is a double silhouette of the artist’s head (the left side just outlined in black while the right side filled in with red); on the bottom of the drawing, Frey has filled it with the massed produced figurines—Buddhas, birds, Asian figures, men on horses, etc. The multiple compositions swirl about as the discussion between a woman and a man continues at the top center.

Carefully selected, the three sculptures on view demonstrate Viola Frey’s working process when creating her ceramic pieces. One sculpture is hand built while the other two are assemblages made from slip cast molds. The artist would use these techniques for more than thirty years, often combining them into large-scale works. A virtuoso at both, they allowed Frey to rearrange human social history as she saw it, creating free associations that mix periods, cultures and regions. The result is poetic, humorous and serious, chaotic and ordered, and most of all intimate and monumental. With slip casting from molds of figurines, Frey not only was the creator but also questioned the idea of authorship. Her staged tableaus incorporated the diverse iconography found in these mass-produced objects by anonymous workers for the American middle class. But with her hands she elevated these everyday objects as commentary on the society they were made to please.

In the 1970s, Frey began making plaster molds of the figurines she bought at the Alameda Flea Market. Working on an intimate scale, the artist created three dimensional tableaux. The earliest sculpture in the exhibition “Seated Man with Hand” dates from 1975 with the artist adding more color glazing in 1999. The composition contains many iconic elements Frey consistently used over the years. The central element is a cast of her kiln glove acting as a backdrop for a scene with a couple and their dog. The male figure sitting regally above the woman in a chair, a direct comment on male dominated Post War social structure. Two Asian figures stand in the background while the entire scene is placed on a Persian carpet; perhaps a comment on exoticism or the prevalence of Orientalism in American consumer culture of the 1950s and 1960s. Two birds and Greco-Roman female fragment also imbue the work with a hint of Surrealism.

The hand-built sculpture, “Untitled (Figure on Knees with Head Down on Folded Arms),” is serene in comparison to the two assemblages. Created long before many were aware of the resting yoga pose Balasana, a single female figure rests peacefully, face down on the pedestal her legs curled under her body and arms folded under her face. Glazed in yellows, blues and reds, one can only think of Matisse’s palette in which broad areas of color are used to define the figures form. This work though small in scale evokes the monumentality of the artist’s large-scale hand-built works. It demonstrates the power of her use of color to elevate the three-dimensionality and Frey knowingly created an indented line with her thumb to imprint her joy as a maker.

These ten works allow the viewer to consider the connections between drawings and sculpture. They also reveal a complex view of what makes us human. Her work comments on our faults but also the beauty of our history. A history that continues to evolve with missteps and incremental progress. Frey’s work not only acts as a lens on the past but also journey to a better future. One filled with global and shared ideals of a better and more equal world.