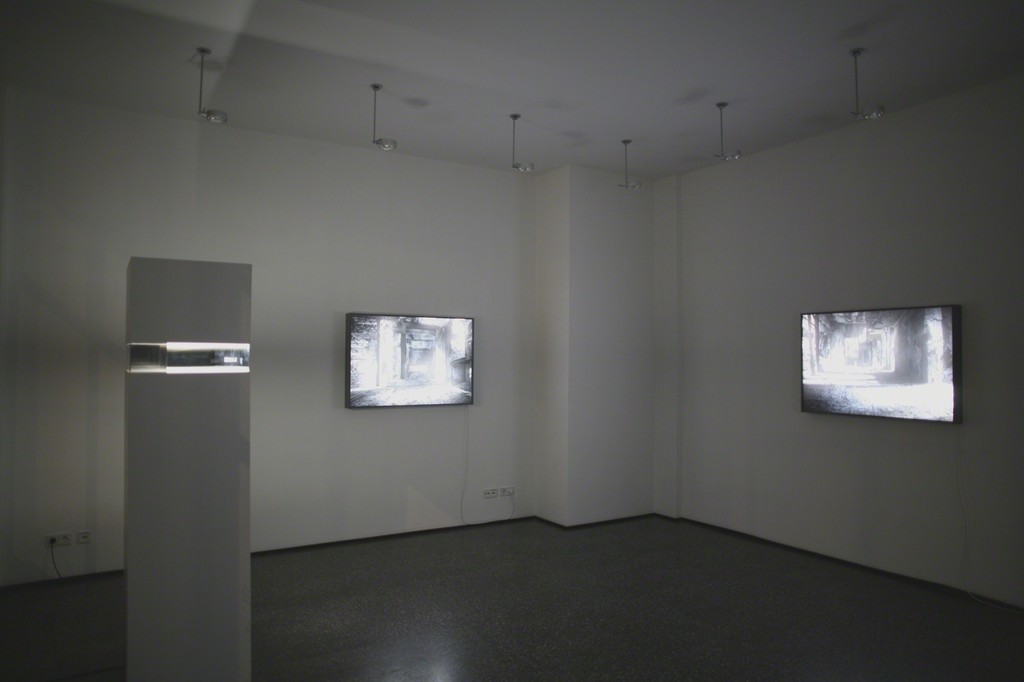 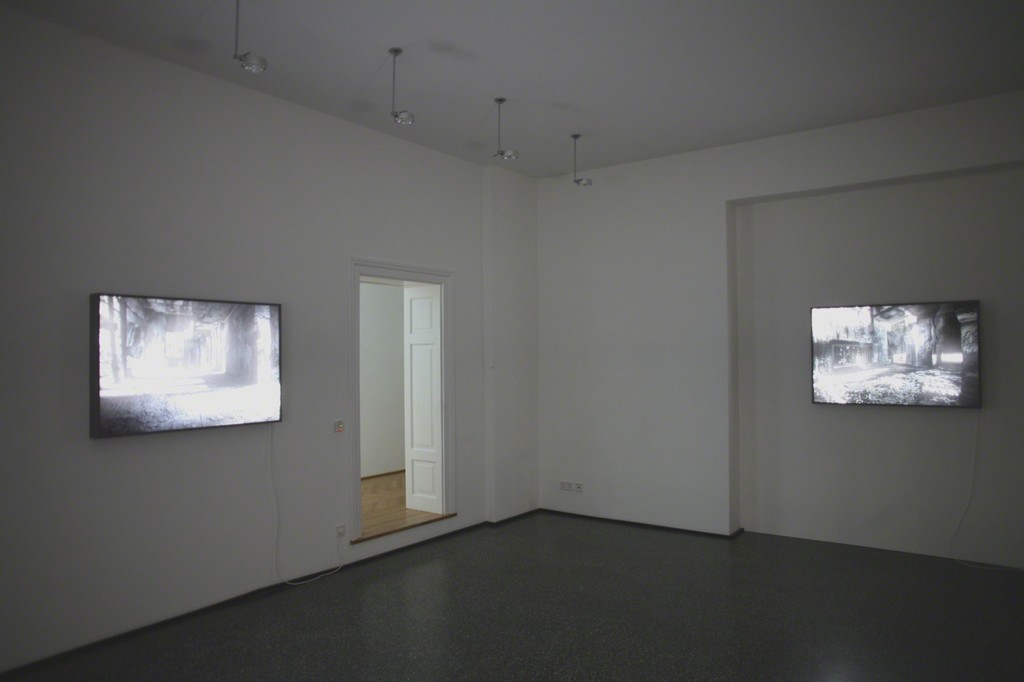 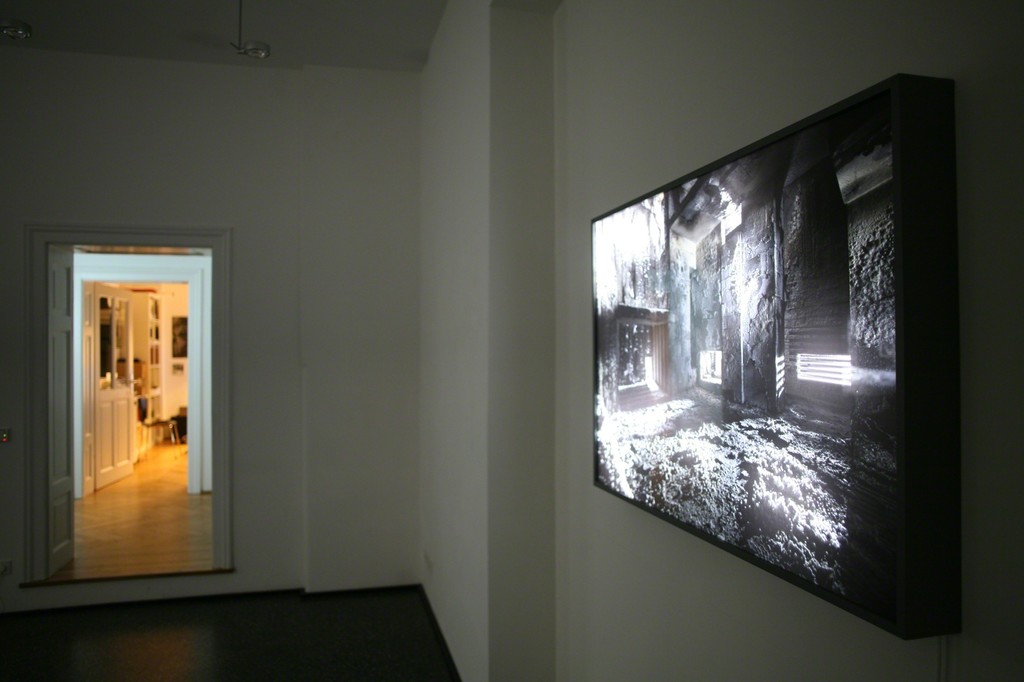 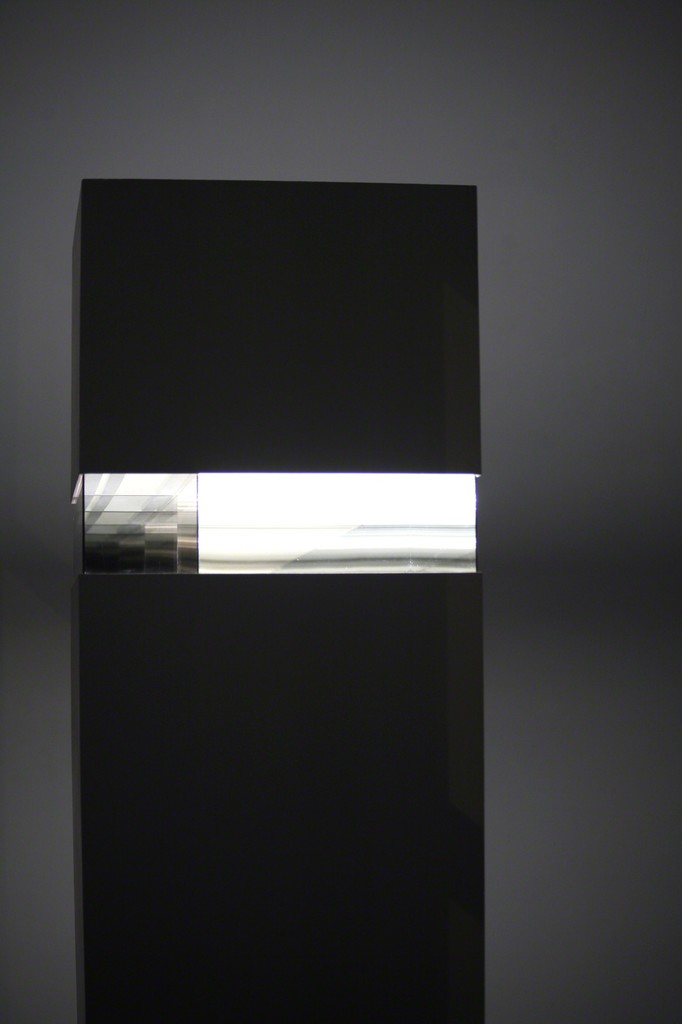 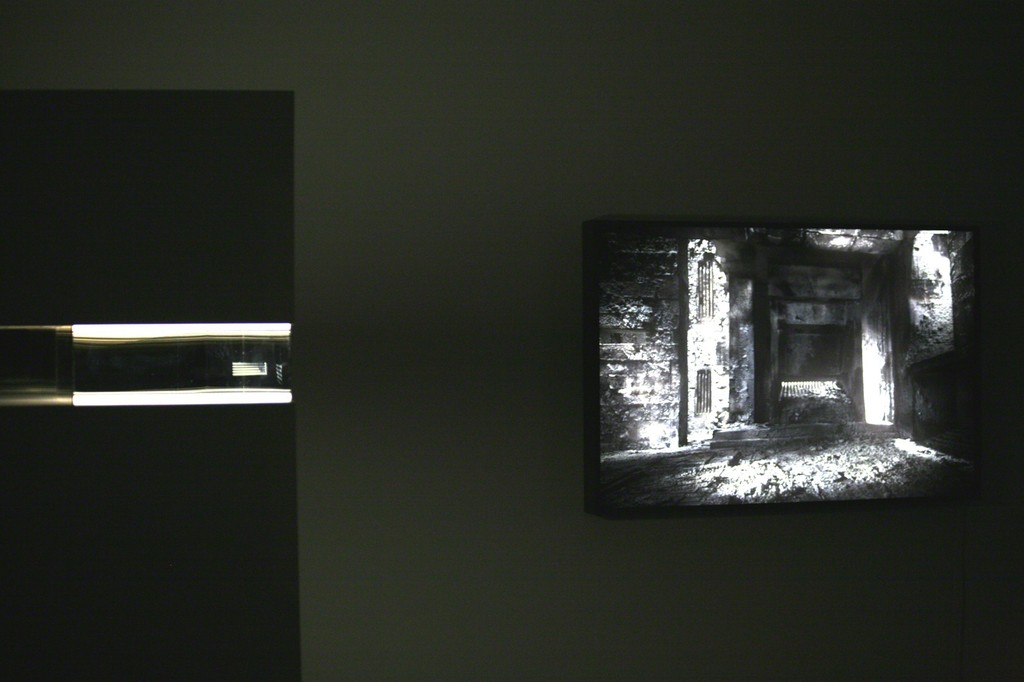 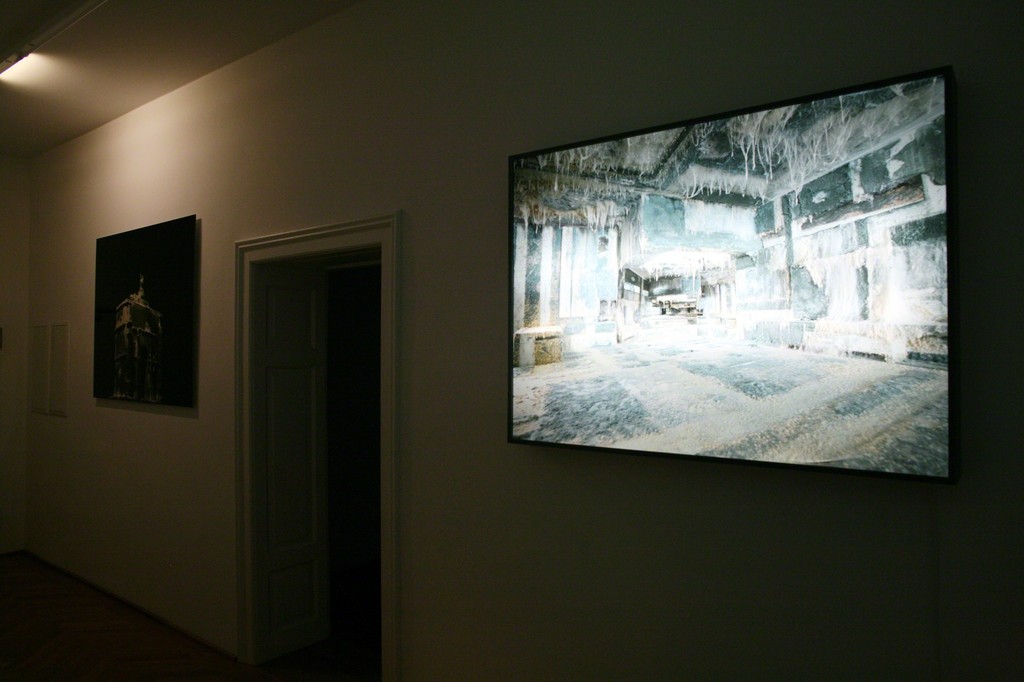 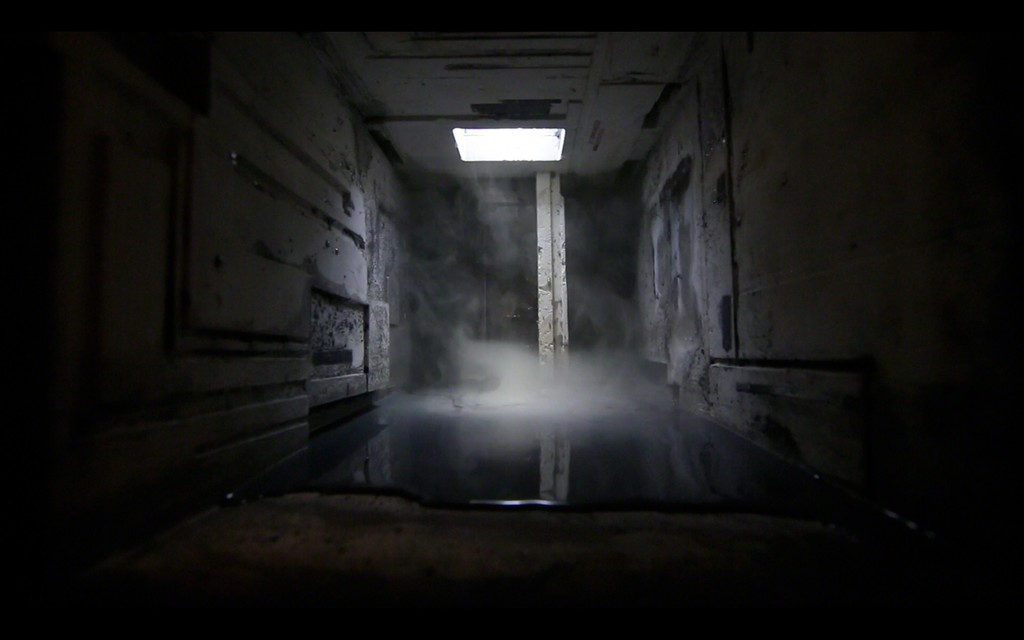 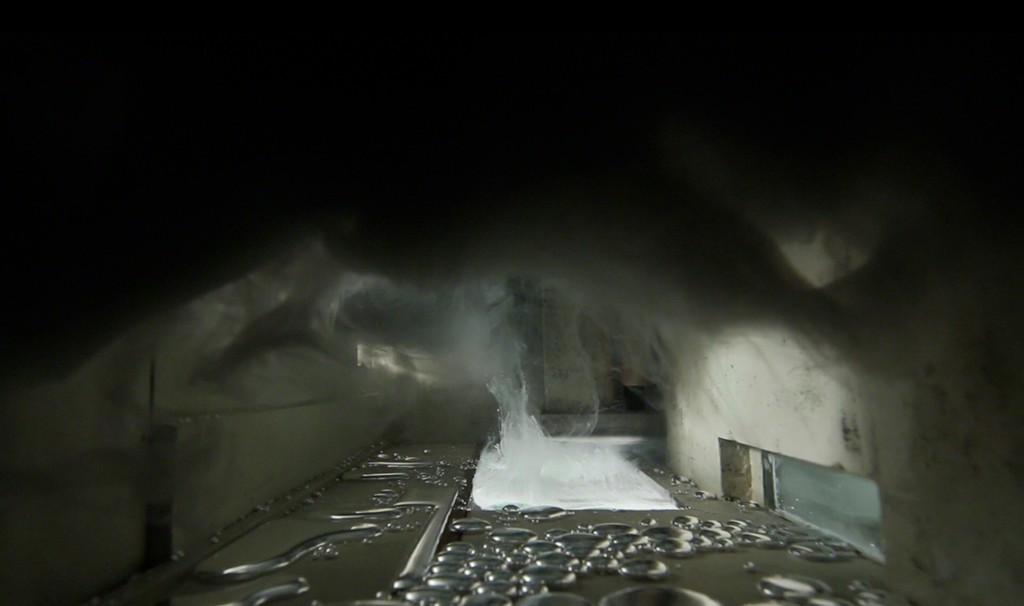 Professor Stephan Huber about the work of Ben Goossens
Smoke, haze, fog, water and other substances billow and drip through Ben Goossens’ rooms. Due to the expanse of the various types of iquids and vapors some rooms are not always clearly visible, yet can only be sensed. They stay unclear, mysterious and vague. Some rooms are empty, yet walls, ceiling and floor are entirely covered with cracks and spiderweb-like filaments caused by heat, such as in the works “Anlage 01” (site 01) and “Danach” (afterwards). Common denominators of all rooms are the unpleasant organic forms and the surfaces which emanate a latent threat. Goossens’ spaces are aesthetic retreats of ruinous beauty, yet at the same time they seem to be “ill rooms” and feel like “architectural inflammations”. I see them as anthropomorphic rooms, standing for something else, because the surface textures remind me of human skin showing signs of old age and above all, because they seem to be living, pulsating organisms.
Morbidity manifests itself in these surreal rooms, making me think of metaphors of decay, similar to photographic documents of the demise of Detroit. Apart from the photographs, in which constant change has been frozen, there are also rhythmical works, films filled with drama, conceptual works, which cleverly pull the viewer into these dripping, steaming, bubbling rooms. Goossens’ obsession with the ephemeral – the constant change and dissolution of form – remind us of Tarkovski’s fluid phantasies of the end times. Unlike Tarkovski though, Goossens choses to show his rooms without any sort of life in them. These are deserted dwellings, even though I feel that they have not been left voluntarily and exist in a world without any humans. Arno Schmidt’s last humans wandering through the destroyed Europe come to mind.
In contrast to these rooms with amorphous structures and undefined boundaries, there are also empty halls of alleged clearness, like “Raum zum Atmen” (breathing room) or “Ebene 160” (level 160). However, these rooms also have a surreal twist. There are walls, for example, which perform the movement of a breathing abdomen or endless reflections, in which the viewer gets lost and is unable to perceive the space clearly. These rooms of alleged clarity are also completely deserted of human life. The viewer, first only an interested voyeur, suddenly and absolutely against his will, plays the leading part in this spectacle.
Ben Goossens fictitious constructions are models, miniatures, which, however, have nothing playful or self-made about them but gain monumentality through photographic or cinematic presentation. He creates his rooms with mechanical finesse, obviously having great fun in experimentation. The spaces are simulations of physical realities and are about trepidations of suppressed origins and unexpressed anxieties and thus aesthetically formed to an image. Through competent execution, these in fact small models, become large psychologial diorama.
In that sense, Goossens’ works are not postmodern phantasies about ruinous architecture, but rather memento mori, allegories of transcience as found in classical art, or claustrophobic dungeon nightmares as in the paintings of Piranesi. Here, death is present in all sorts of facets.
In these hedonistic times, where the world focuses on the here and now the young artist Goossens takes a remarkle stance with his work.