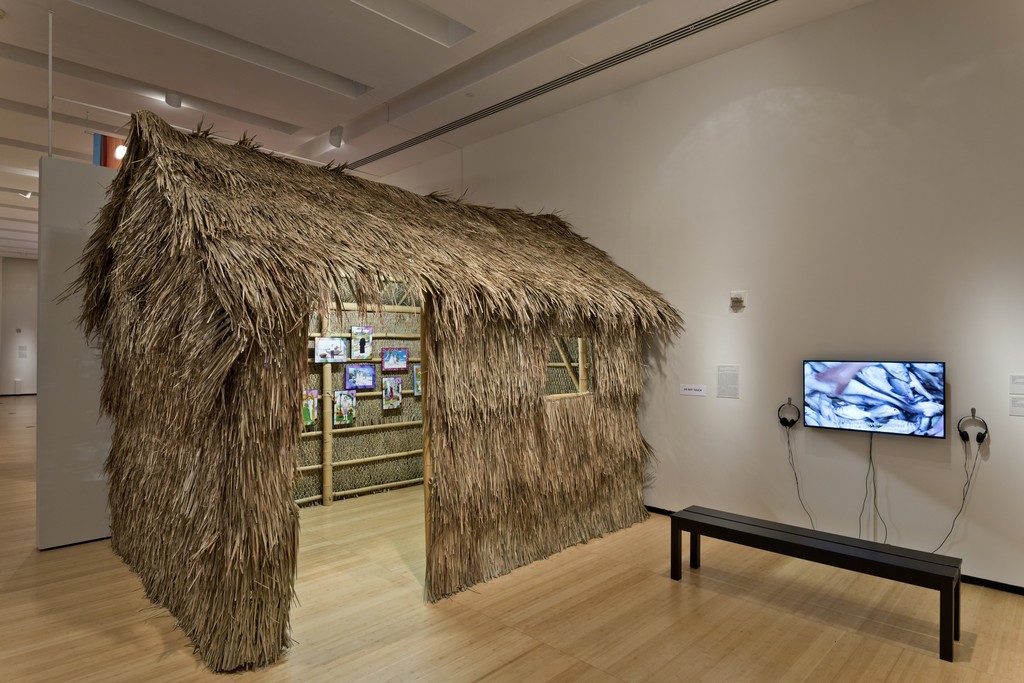 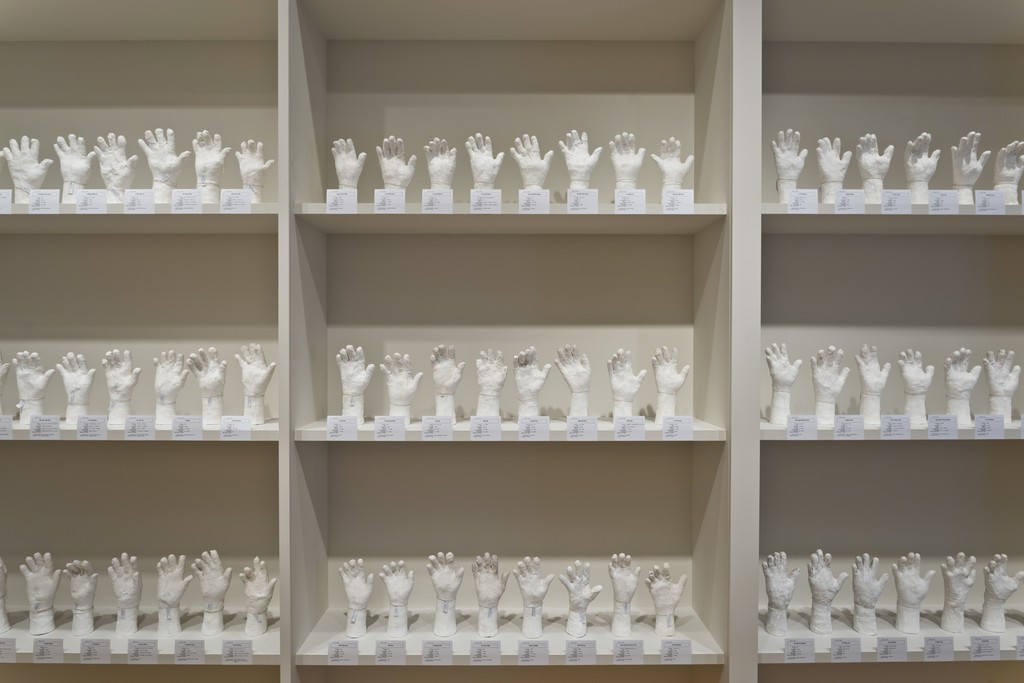 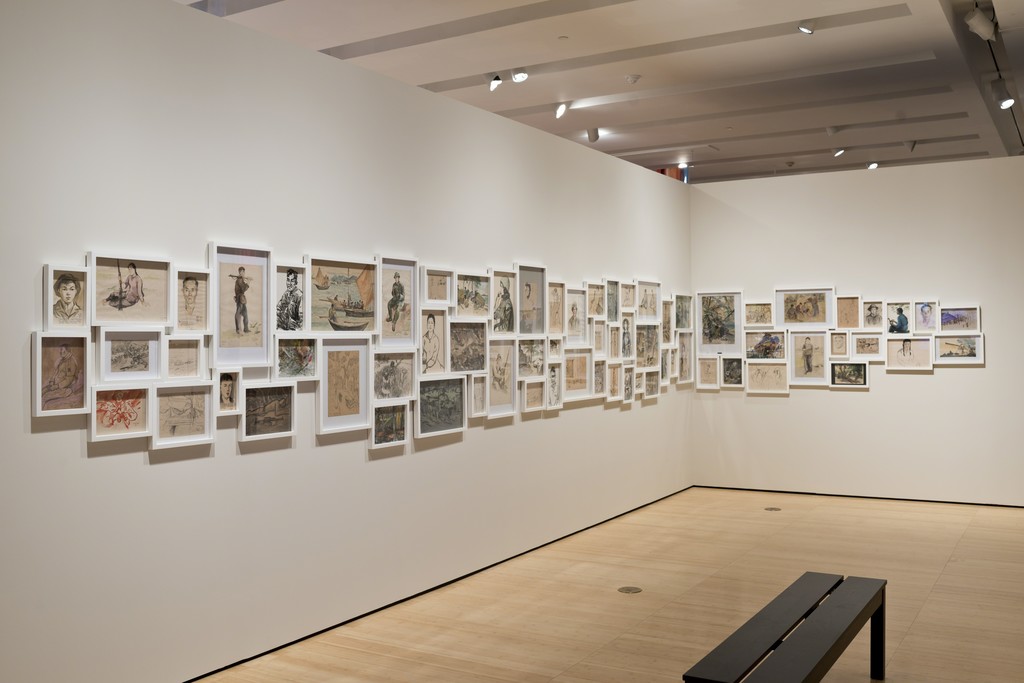 After Darkness: Southeast Asian Art in the Wake of History, on view at Asia Society Museum in New York, September 8, 2017, through January 21, 2018

Artists featured in the exhibition are:

FX Harsono (b. 1949 in Blitar, East Java, Indonesia. Lives and works in Jakarta.)
Htein Lin (b. 1966 in Ingapu, Myanmar. Lives and works in Yangon.)
Dinh Q. Lê (b. 1968 in Ha Tien, Vietnam. Lives and works in Ho Chi Minh City and Los Angeles.)
Nge Lay (b. 1979 in Pyin Oo Lwin, Myanmar. Lives and works in Yangon)
Nguyen Thi Thanh Mai (b. 1983 in Hanoi, Vietnam. Lives and works in Hue.)
The Propeller Group (est. in 2006. Based in Ho Chi Minh City and Los Angeles.)
Angki Purbandono (b. 1971 in Cepiring, Indonesia. Lives and works in Yogyakarta.)
Tintin Wulia (b. 1972 in Denpasar, Indonesia. Lives and works in Brisbane, Australia.)
"The work of each of these artists represents their unfiltered responses to political trauma and societal transition in their home countries," says Boon Hui Tan, Vice President for Global Arts & Cultural Programs and Director of Asia Society Museum. "There is a documentary and sometimes activist quality to the works, which are connected across geography and cultural specificities by a common thread: artists creating a lasting impact by illuminating difficult and at times controversial topics during their countries’ periods of transition. While there is currently great interest in the role of the artist as activist, this exhibition asks the question of whether it is art that has changed the world, or the world that has changed art. In the present, when art and artists are called upon to address the fractures and challenges of our time, the exhibition looks at how artists from other, non-western polities have responded to similar issues."

The exhibition is cocurated by Tan and Michelle Yun, Senior Curator of Modern and Contemporary Art at Asia Society. An illustrated catalogue accompanies the exhibition and features critical essays by leading scholars of Asian contemporary art based in Southeast Asia: Aye Ko, Zoe Butt, Mella Jaarsma, and Alia Swastika.

Contemporary Indonesian art was born out of political action during the authoritarian regime of President Suharto’s New Order government and the Reformasi period which saw the transition to a democratic government after Suharto’s fall in 1998. Indonesian artists FX Harsono and Tintin Wulia have each created powerful, politically charged commentaries on Reformasi and its aftereffects. In his long career, Harsono’s multidisciplinary works have mirrored the tensions and challenges faced by modern Indonesia in politics, society, and culture. In Blank Spot on My TV, 1998, Harsono presents television stills of political leaders with their faces covered by a white circle, signifying the lack of meaningful dialogue about the changes that took place during Reformasi. His more recent works address the unacknowledged history of the Indonesian Chinese community. Wulia’s video works provocatively explore migration and border control.

Vietnam’s legacy of conflict has had long-reaching ramifications for the arts; contemporary Vietnamese artists are routinely subject to censorship. This exhibition focuses on artists whose work reflects the legacy of the American-Vietnam War. Dinh Q. Lê and Tuan Andrew Nguyen of The Propeller Group collective came to the United States as refugees in their youth and returned to Vietnam in recent years. In the process they have played pivotal roles in helping to rebuild the cultural infrastructure of Vietnam. Lê’s work in the exhibition includes works on paper by Viet Cong soldier artists that he collected after the war and which are shown alongside an animated video of interviews with some of the artists he was able to locate.

The field of contemporary art in Myanmar, where artists receive minimal institutional and commercial support, is one of the newest and most exciting in the region. A significant portion of contemporary art in Myanmar is performance art, which gives artists flexibility to work in alternative spaces at minimal cost. Htein Lin and Nge Lay’s intense and personal works reflect their responses to the dramatic transformation within the country as it undergoes gradual reform and political transition away from the authoritarian, military regimes that have controlled the country since 1962. Htein Lin’s installation A Show of Hands, comprises plaster of Paris molds of hundreds of former political prisoners’ hands.

Alongside these established artists, the exhibition includes work by two emerging artists: Angki Purbandono and Nguyen Thi Thanh Mai, from Indonesia and Vietnam respectively, who became active long after the moment of political transition in their home countries. The work of these two artists continues the long tradition of socially engaged art that marks much contemporary art from the Southeast Asian region.

Major support for After Darkness: Southeast Asian Art in the Wake of History comes from The Andy Warhol Foundation for the Visual Arts.

Additional support is provided by The Horace W. Goldsmith Foundation and the National Endowment for the Arts.