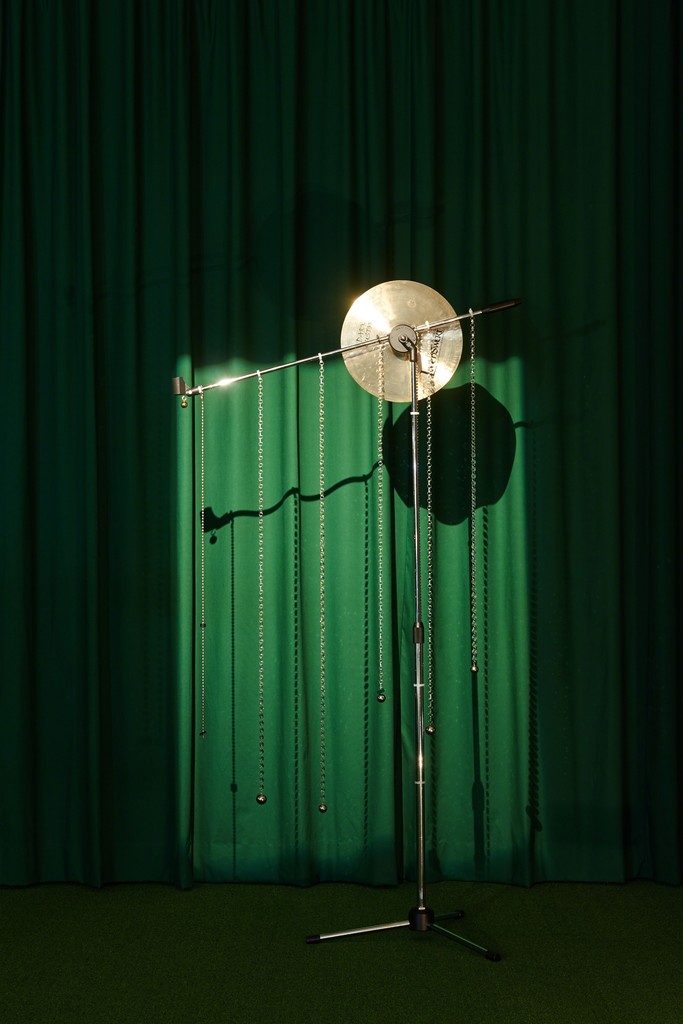 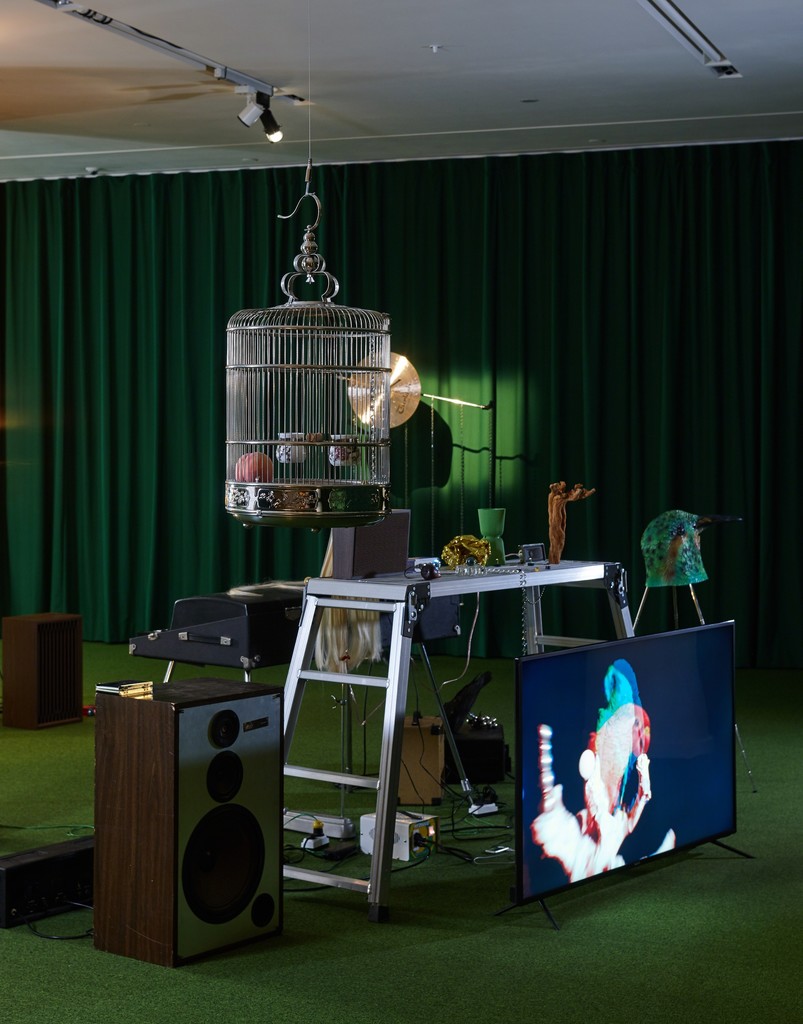 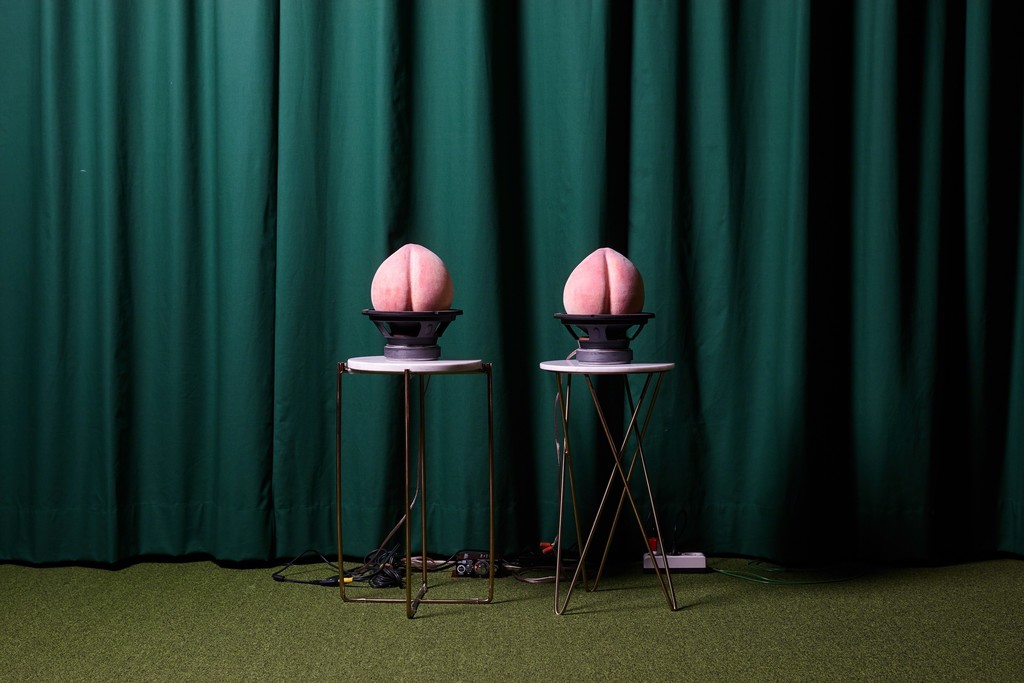 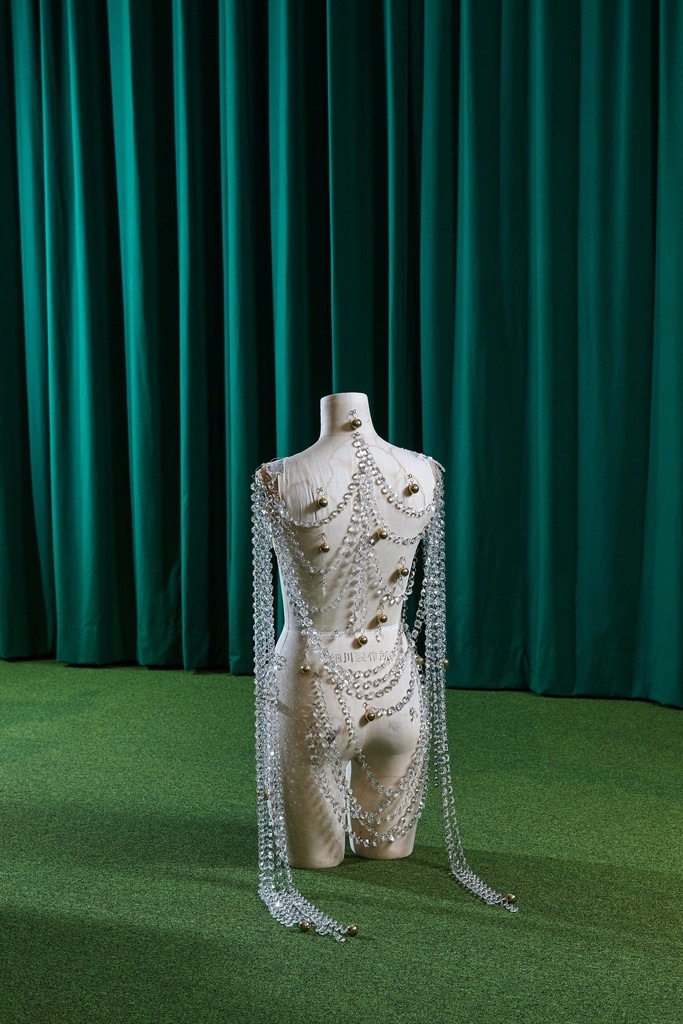 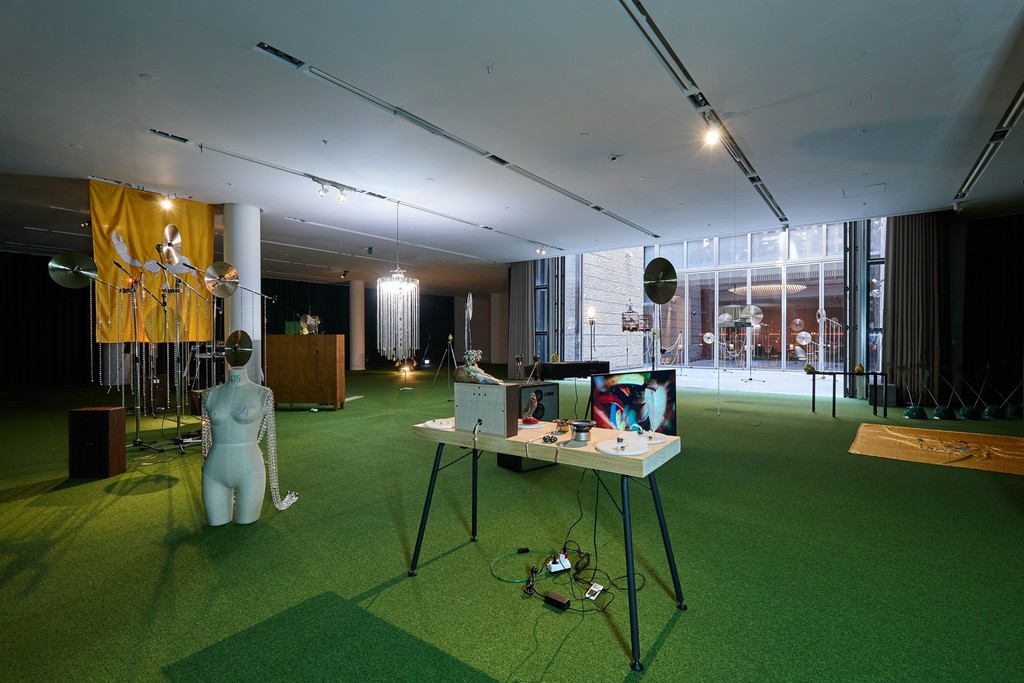 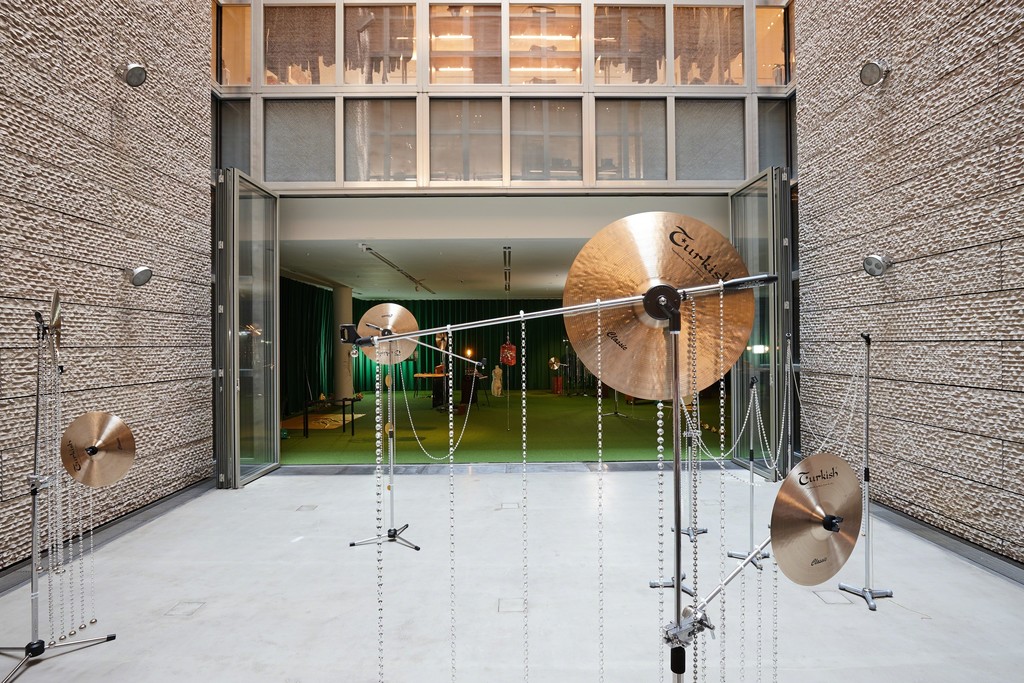 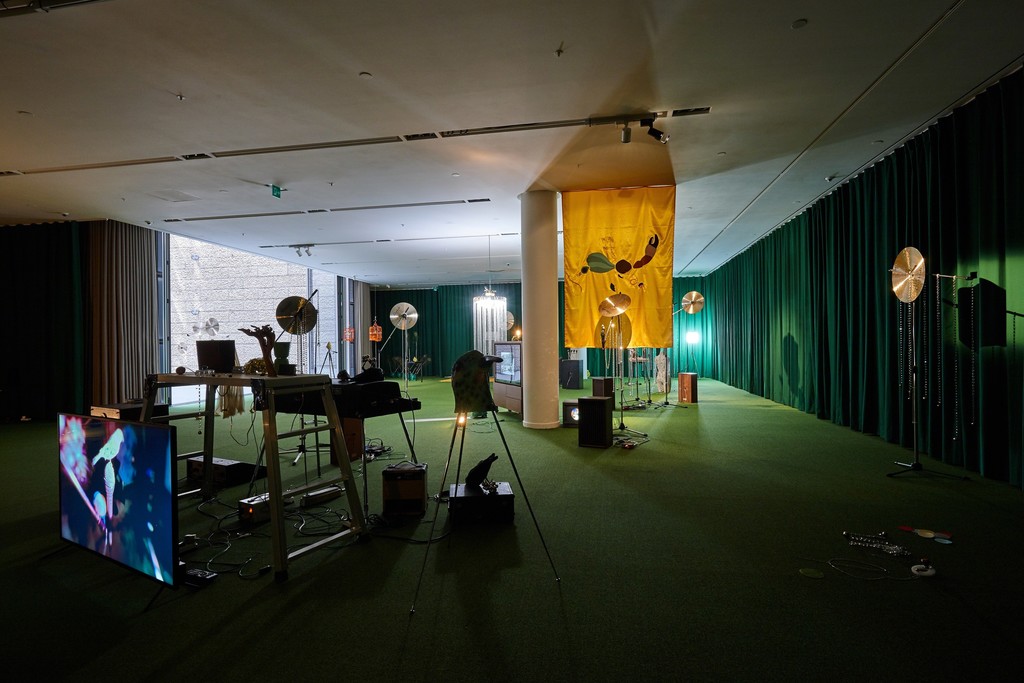 The exhibition space covered with a green carpet and a green curtain is a scene suggested by artist Yangachi. On the stage occurs one event after another. And yet, these events are not easily fathomable. What the viewers looking around the gallery notice at a glimpse are the objects arranged there: monitors with a video being played, speakers playing various types of sounds regardless of the video clips, cymbals decorated with a chain of transparent beads and electronic keyboards are placed along with chandeliers and bird cages dangling in between. A wider look around with bigger eyes would show miscellaneous objects, golden chunks and stuffed animals on the green carpet, on the keyboards and the speakers, and in the bird cages are placed in some kind of order—or chaos.
at first, with patience, in the darkness, resorting to spotlights added here and there as well as the naturally emitted light from the objects in the gallery happen to sense some movement in the bird cages dangling on the ceiling. Birds—moving and living elements which have intervened in the order established with immobile objects. Along with the beings with—artificially uncontrollable—autonomous will, another variable which has been programmed emerges. Sounds—there come in romantic melodies followed by Cantonese-speaking sounds, and noise-like electronic sounds stimulating nerves abruptly are intermittently resonated through the exhibition space. As such, the viewers confront their heterogeneous, their own exclusive and personal tempo-spatiality—a stage—where the number of terms and variables placed in the gallery have a random encounter with one another.

According to his statement, the exhibition space encountered by the viewers is nothing more than an assumption or a signal of an event which might become the future. If an exhibition is an uncertain signal instead of a clear outcome to viewers who have traditionally encountered the object integrity as art which has been realized by artists, it is a bewildering, uncomfortable and unpleasant experience. And yet, if the viewers can be free from a custom which oppresses them, they might be able to experience their own individual outcome through the “contact” with the uncertain signal. It is the individual and personal art projected on the screen which has been individually and secretively generated in individuals’ mind, instead of an object as art that has come into being before their eyes. Such an attempt is in line with Yangachi’s longstanding efforts to develop a language of art based on other senses besides the contemporary art which is based on visual perception.

Yangachi is an artist who has been the talk of the town whenever media art was mentioned since the early 2000s. His early works—

And yet, even when he put forth net art and media art in his works, his genuine interest lied in the network instead of media technologies or web, and in the human network instead of the online network. Such an interest of his was gradually transferred to media as communication where electricity-electronics was excluded, which has been experimented and modified in different ways through the following works: installation works including (2014) and

At a point when the robust order established based on the visible and the audible—the perceivable—gets confused due to the invisible and the un-audible, the viewers encounter a bigger world, that is, an unseen and unheard of new world. Yangachi’s exhibition

“...it [an encounter] is an event that remains quite opaque and only finds reality in its multiple resonances within the real world.”

And yet, still, it is entirely up to the viewers whether or not they would appear on the stage he suggested. Even if they appear on that stage, we do not know what would happen after two heterogeneous worlds encounter with one another. An encounter is an uncertain and accidental event, a one-time experience. Sometimes, taking risks is required. It is like our lives. The same applies to art. Would you appear in such a violent and unexpected event, or on such a stage?