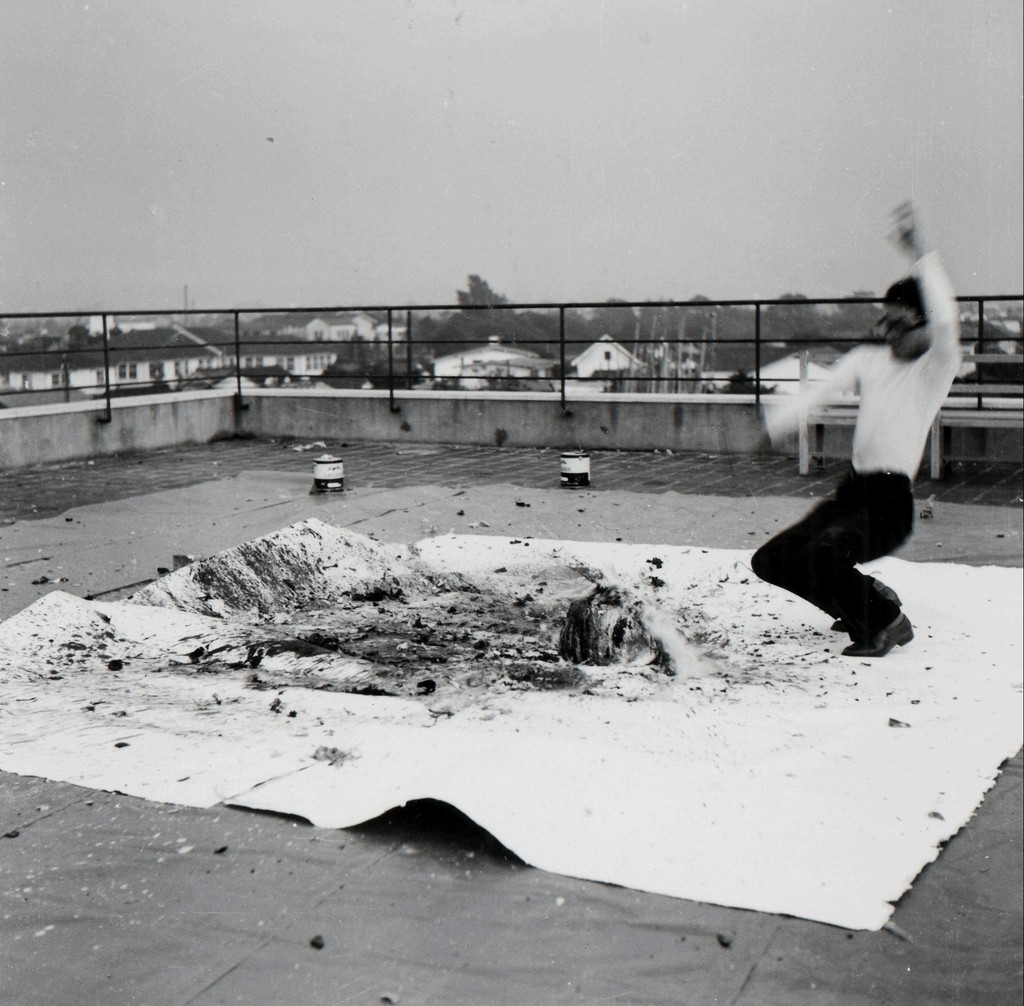 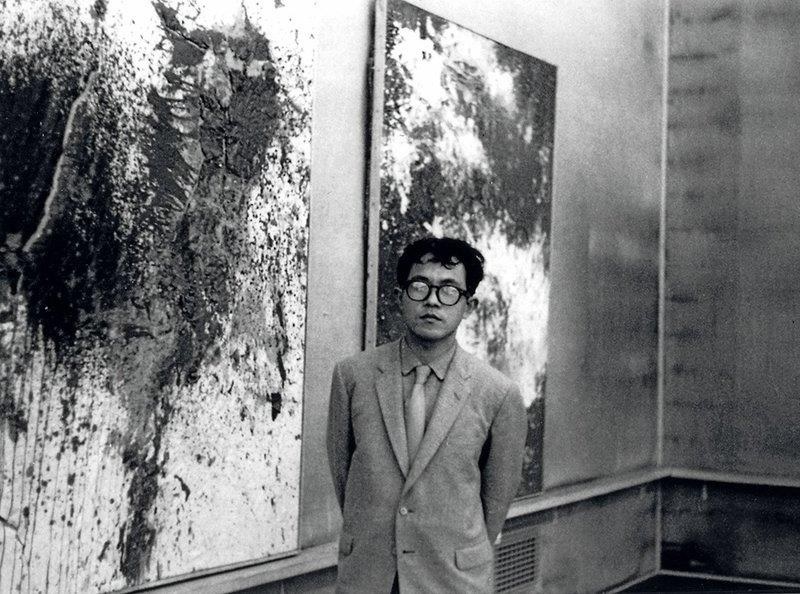 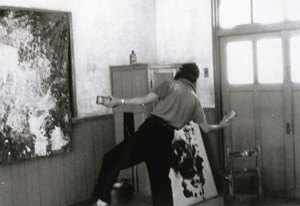 The World of Shozo Shimamoto
Text written by curator and art critic Yoshio Katoh, translated from Japanese by Christopher Stephens

After World War II, the notions of democracy and freedom of expression, introduced under American rule, exerted a strong influence on art in Japan. As the country shifted from pre-war militarism to post-war democracy, and values of all kinds changed, artists of the 1950s and ’60s worked to explore and create new values. This period overlapped with an era of high economic growth, and having reached this level through a peaceful post-war recovery, Japan evolved into a stable nation. Determined to become an economic power, the entire country united, making a vigorous push to catch up with and overtake the world. It was an era in which Japan set out to break with past conventions and establish its place in international society, and one in which people groped in the dark for new values. Similarly, in contemporary art, it was also an era in which the avant-garde destroyed conventional notions and forged a new spirit. Post-war Japan was marked by an incessant drive to create new values.

Take for example, the Gutai Art Association (or simply Gutai), one of the most significant Japanese avant-garde art groups. The group’s name was intended to “embody the fact that our spirit is free.” Gutai was active for 18 years from 1954 to 1972. It was made up of a group of young artists from the area between Osaka and Kobe who had assembled around Jiro Yoshihara (1905-1972), a painter and businessman who also served as Gutai’s leader. Shozo Shimamoto (1928-2013) was one of the founding members.

Shimamoto was born in 1928, in the Yahataya district of Minato Ward, Osaka, to parents who worked in the shipping industry. He enrolled in the philosophy department at Kwansei Gakuin University in 1947. Though he did not receive any formal education in art, he won an award in the All Kansai Exhibition for a painting he made around the time he entered university. Meeting future Gutai leader Jiro Yoshihara the same year expanded Shimamoto’s artistic horizons and sparked new developments in his work. Not only did Yoshihara possess financial power and leadership skills, he was well-connected in the art world. On the other hand, Shimamoto’s ideas and quick wit spawned an avant-garde scene. It is no exaggeration to say that together the two formulated and enacted the principles of Gutai.

These principles were summed up in the inaugural issue of Gutai, the group’s newsletter, published in January 1955: “The thing that is most important to us is that contemporary art acts as a free space providing maximum release for people to survive the trying conditions of contemporary life. It is our deep-seated belief that creativity in a free space will truly contribute to the development of the human race.”

This exhibition focuses primarily on Shimamoto’s important early paintings from the 1950s and ’60s. The hole works he began prior to Gutai are especially vital. At approximately the same time, the Italian artist Lucio Fontana (1899-1968) began making holes in the picture plane as a “spatial concept.” According to my research, Fontana began experimenting with the idea using paper linings and canvas in 1949. It was no accident that the first hole he made was in a white plane. This was a way of accumulating actions to restore the plane to three dimensions or a space. In his early works, Fontana intentionally made countless small holes on both sides of the white planes. Shimamoto, however, claimed that he began working with holes before Fontana.

The two artists’ works differ in that Fontana’s were intentional and Shimamoto’s accidental. On the other hand, both artists make us aware of the materiality of painting. And instead of focusing on the paintings as paintings, both were fixated on the materiality of the paper or canvas support medium, and the spatiality created by the holes. This was a revolutionary concept in painting. Fontana was originally a sculptor; Shimamoto had never been trained as an artist. Making and ripping holes in the sacred ground of the picture plane was something that no artist had ever imagined doing. This bold leap or deviation might be seen as a new discovery and the birth of a new kind of art.

Lacking the money to buy canvas, Shimamoto arrived at this method after creating an alternate support medium out of seven or eight pieces of newspaper stuck together with boiled flour. While attempting to paint on the newspaper, Shimamoto inadvertently tore the picture plane, inspiring him to use holes in other works. Raising essential questions about the medium, this approach conveys the fact that even before it exists as a plane, a painting is a support.

Even today, Shimamoto’s hole works, brimming with youth vigour, are masterpieces. Despite the accidental nature of the pictures, Shimamoto’s approach produced some surprisingly excellent pieces. And his decision to use the hole-filled support medium as a work rather than discarding it, is proof of his uncommon sensibility. In his early 20s, Shimamoto was clearly already endowed with a natural gift.

Shimamoto’s works from the 1950s in this exhibition are notable for the material expressions and traces of action that are conveyed by the thick, cracked layers and bulges of paint. The sprays and scratches in the paint can also be seen as a celebration of a free spirit. Shimamoto’s works of the 1960s, on the other hand, are compositions that brim with colour (using oil and other types of paint on canvas) and make extensive use of the dripping technique. Noticing that gravity caused paint to flow downward, Shimamoto seems in part to have been attempting to visualize this invisible force. The works are also concrete expressions of abstract painting’s mission to “make the invisible visible.”

In July 1955, Shimamoto showed several hands-on works, which attempted to embody actions, the body, and time, in The Experimental Outdoor Exhibition of Modern Art to Challenge the Mid-Summer Sun, held in Ashiya Park in Hyogo Prefecture. Among these was a device that created various hollows when the user walked across a series of wooden planks in a long wooden box. The user was treated to a physical sensation based on the awkward sensation of instability. It was called Please Walk on Top. According to Shimamoto, the work “invited [the viewer] to walk on top of what appeared to be ordinary boards,” but was actually “a contraption equipped with springs that would sink down under a person’s weight.” He continued, “Some springs were wound tightly, and others weren’t; some boards sank down deeply and others didn’t.” This hands-on work, which invited the viewer to walk on top and experience art – something they were normally only allowed to look at and never to touch – was an epoch-making piece unlike anything that had ever been made before.

In 1956, Shimamoto instantly made a huge painting on an approximately ten-meter-square sheet of vinyl by using acetylene gas to blast paint out of a four-meter-long steel tube with a 30 centimetre diameter. The explosion of paint flew across the entire picture plane, dispensing with basic structural elements of painting such as composition and colour. Shimamoto also instantly created a work by hurling bottles filled with paint at a canvas stretched across the floor, scattering pieces of glass and pigment everywhere. These are also examples of works in which chance was a necessary component.

In 1957, Shimamoto participated in the Gutai Art on the Stage events held at Sankei Hall in Osaka and Tokyo. In a work titled Material Destruction, the artist smashed a tube packed with ping-pong balls and a box filled with confetti. During the same period, Shimamoto made films and sound works using a tape recorder. In light of this, he can be seen as a pioneer in what is now known as “media art.” In 1962, the Gutai Pinacoteca was opened in a renovated warehouse owned by Yoshihara in the Nakanoshima district of Osaka. Shimamoto was chosen as the subject of the first solo exhibition at the venue. This demonstrates how deeply Yoshihara trusted Shimamoto. An artist himself, Yoshihara apparently held the highly creative young artist’s avant-garde methods and ideas in high regard.

In the 1970s after Gutai dissolved, Shimamoto became involved in mail art. He sent his works to people through the mail, asked some of them to modify and send back the works, and sent copies of the same work to multiple people. Setting out to create links with people through the mail, Shimamoto annually undertook 8,000 network projects with people in 60 different countries. At the time that I first met Shimamoto, he was much more excited about mail art than painting, and he spoke eagerly about the concept of networking. He was also searching for a way of promoting peace through art by establishing a mail art network in an era that predated the internet. In retrospect, Shimamoto showed extraordinary foresight, anticipating today’s information and net-based society.

In later years, both in Japan and abroad, Shimamoto suspended himself 30 meters in the air from a crane and threw bottles of paint at a sheet of fabric stretched on the ground. These were both performances and public painting events.

Shimamoto was the type of artist who constantly devised new ideas and changed with the times. This explains why he went from making works with holes to cannon paintings, bottle-throwing paintings, and mail art before embracing crane paintings, glass-head art, and eventually returning to bottle-throwing works. He was an artist who confronted the spirit of the times, pursued the moment of change, and was dedicated to living in that moment. Though he was an avant-garde artist, Shimamoto also put great effort into art education in his role as a professor emeritus at Kyoto University of Education and a professor at Takarazuka University of Art and Design (now Takarazuka University). Toward the end of his life, he also made great efforts to introduce outsider art as the chairman of Able Art Japan. Through these two roles of avant-garde artist and educator, Shimamoto was rare in that he adopted the view of the socially disadvantaged while producing cutting-edge work, and was also interested in making a contribution to society.