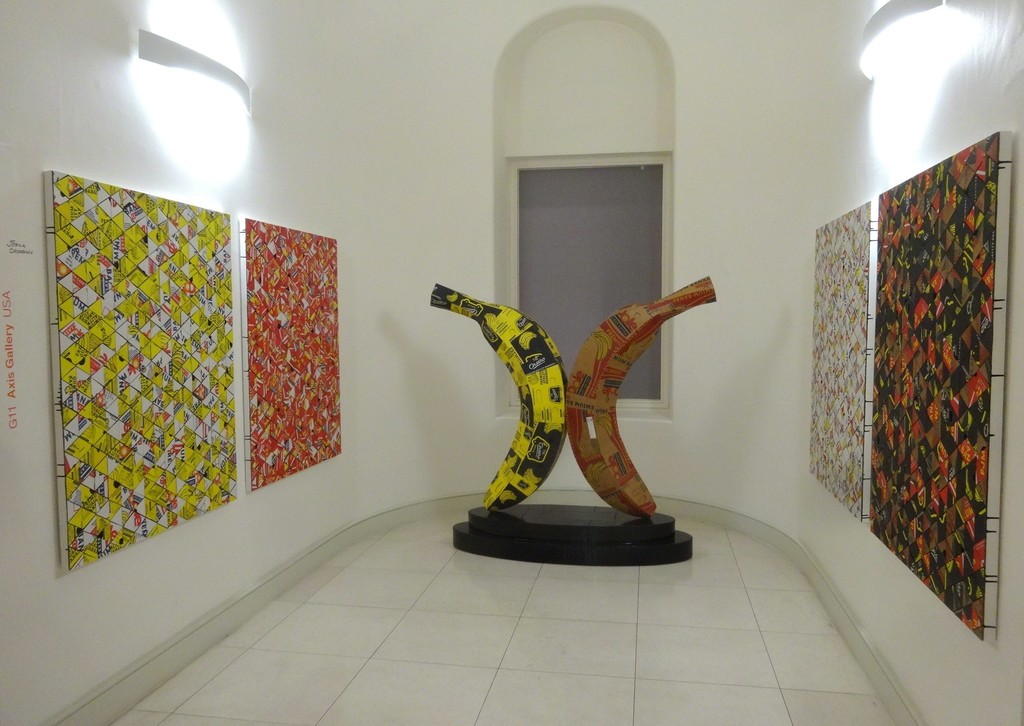 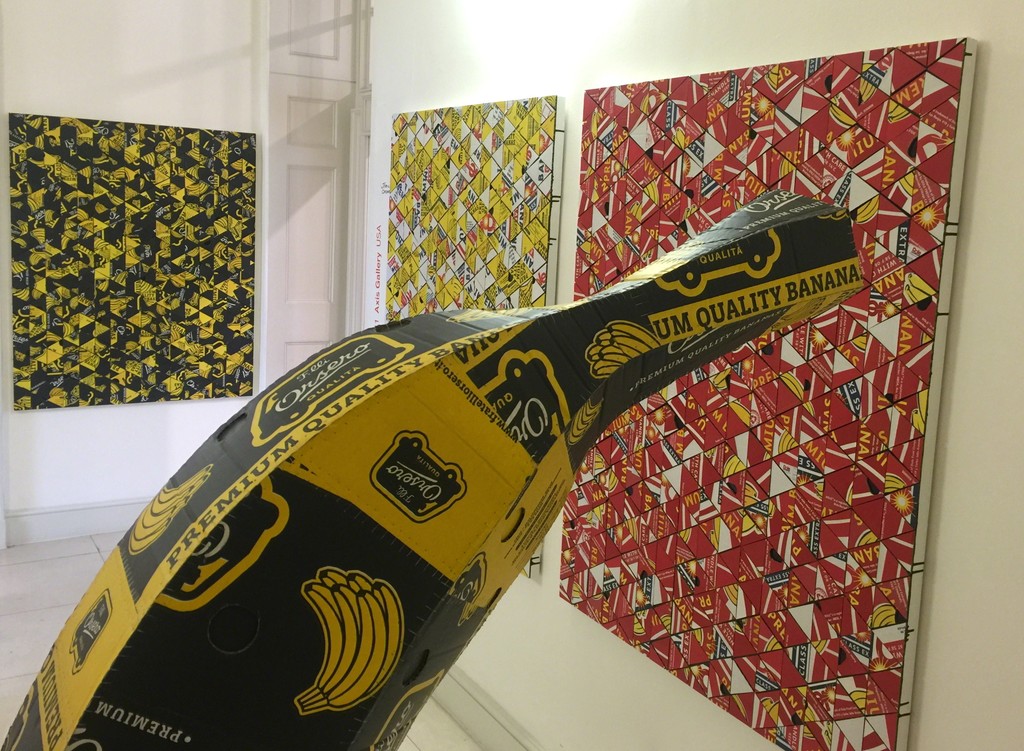 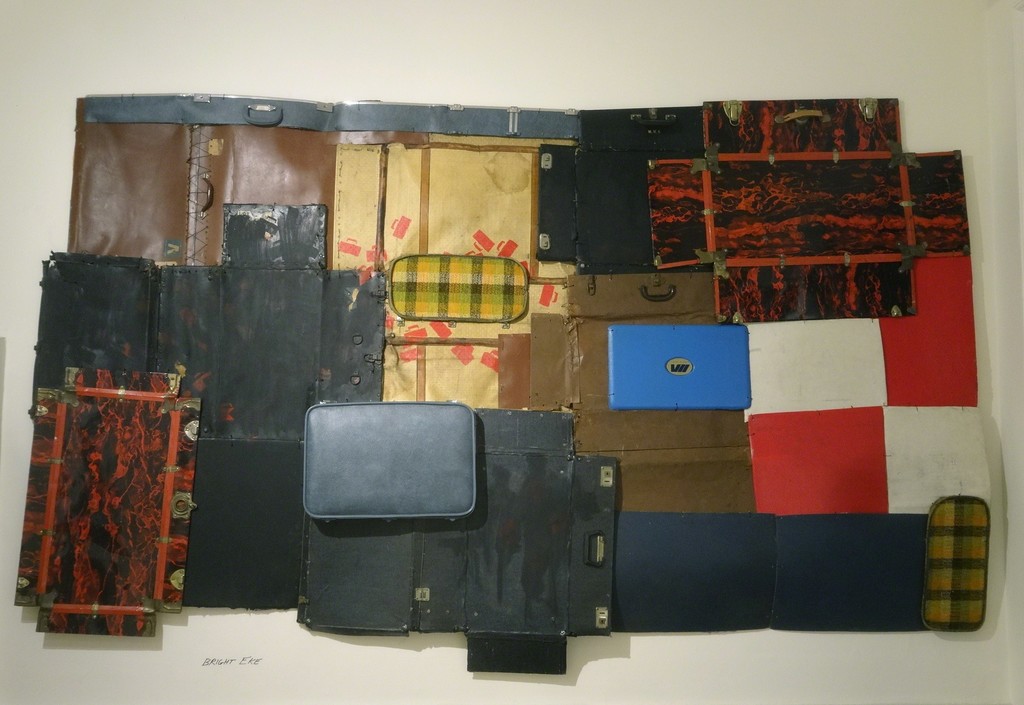 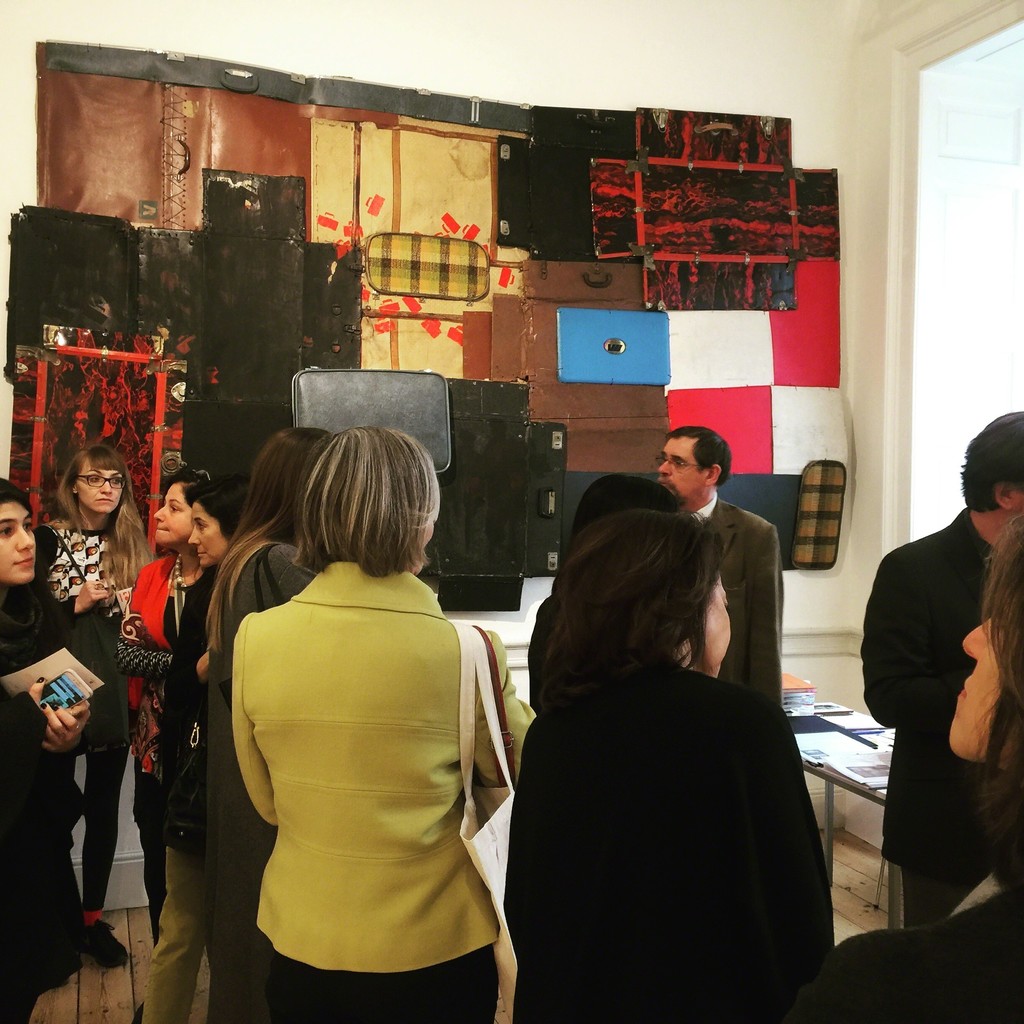 a crowded booth with Bright Ugochuwu Eke's Portmanteau, 2015 in the background. 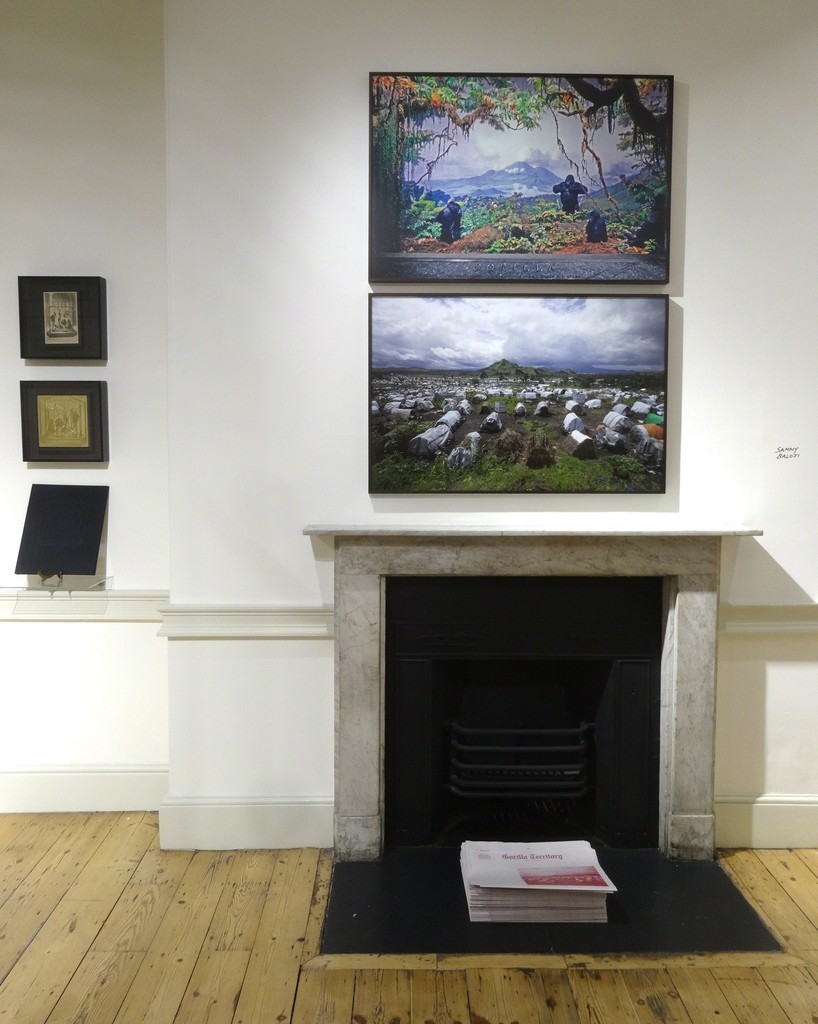 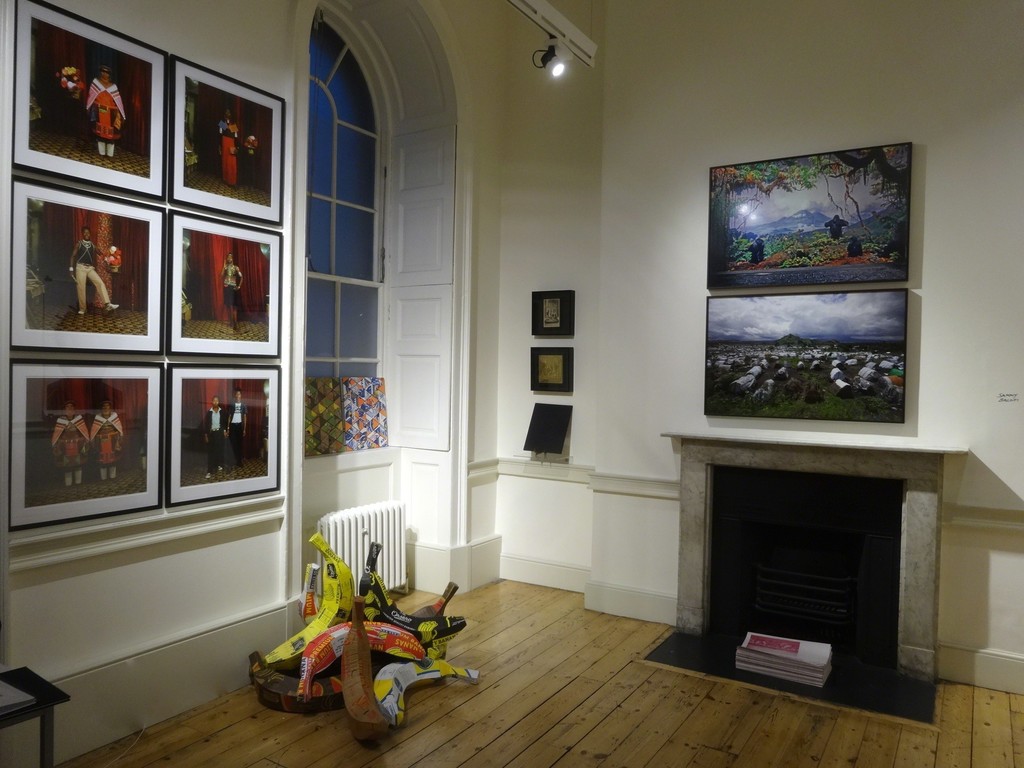 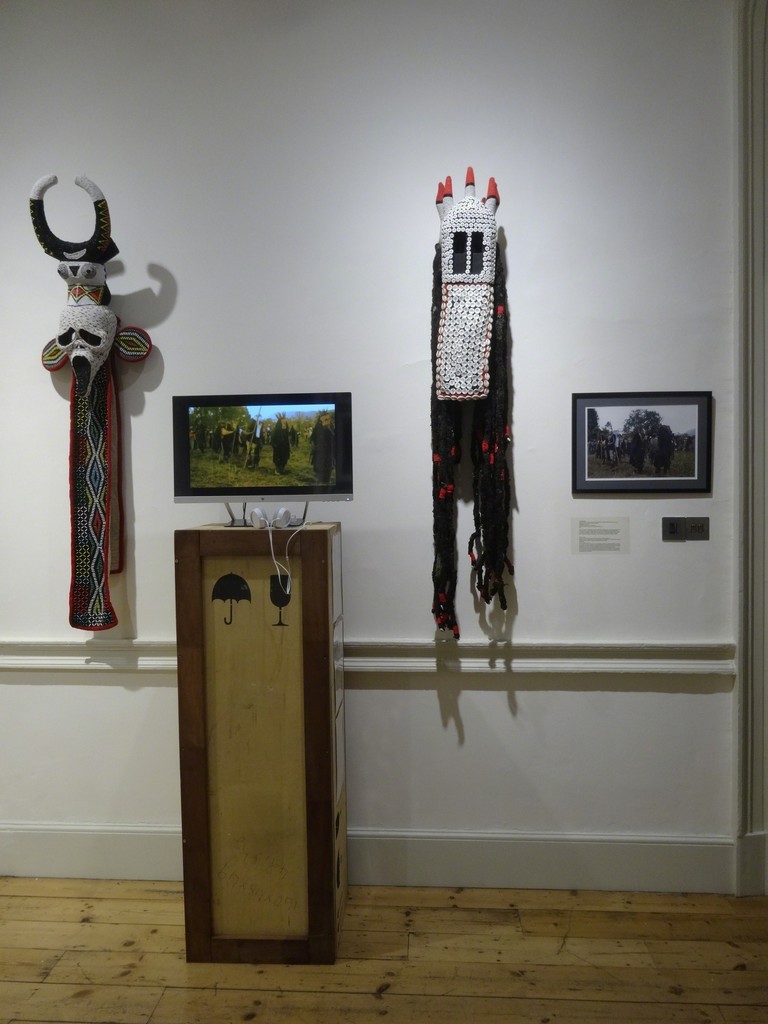 Sammy Baloji’s installation “Gorilla territory” for Somerset House weaves together strains of past and present realities in the eastern Congo (DRC). Here, the world’s deadliest conflict since World War 2 has caused 5.4 million deaths and displaced 2 million people. Refugees camp in the Virungu National Park, beneath the same vista of volcanoes that forms the backdrop of Carl Akeley’s famous gorilla diorama at the American Museum of Natural History. So influential was Akeley’s expedition that a national park was created here to protect the gorillas—and the Belgian rulers of the Congo at the time strove to create their own competing gorilla diorama. Today, poachers, conservationists, militia, and local farmers and fishermen compete for control of local resources in Virunga National Park, while more than 200 NGOs pursue broader stakes in this region.

Bright Ugochukwu Eke’s recent works focus on the global refugee crisis, which includes a large percentage of Africans. “Portmanteau” originated as an aristocratic word for the court official who carried a prince’s mantle, but it came to refer to luggage made of two unequal parts. For Eke’s work titled “Portmanteau,” specially made for Somerset House, Eke tears apart and flattens suitcases, his process a metaphor for the forces that refugee families suffer. Eke’s title ironically highlights the dire straights of refugees compared to the ease of luxury travelers with branded luggage. “Portmanteau” is also a term coined by Lewis Carrol for a word composed of two others——such as “Guccifer”, the name of a famous hacker whose name combines Lucifer and the luxury luggage brand Gucci.

Jebila Okongwu’s favored medium is banana boxes. Their clichéd texts and “tropical” graphics reference the “‘exotic”—a label applied to artists of African descent from Josephine Baker to Okongwu himself, who both slyly play on the banana’s sexual symbolism. When banana boxes are shipped to the West from Africa, the Caribbean, and South America, they retrace slavery routes, and highlight current flows of migration and capital that repeat patterns of exploitation of the “third world.” Okongwu also cuts up and recombines the boxes into two-dimensional collages on linen. His method activates Chance—a vital root of Western Dada and of African divination—to create vibratory visual fields that echo popular “African” fabrics—which are themselves hybrid products of cross-cultural influence.

Hervé Youmbi premieres in London an installation entitled “Two-Faced / Double Visage,” from his project Visages de Masques / Faces of Masks. The installation wreaks havoc with Western stereotypes of African “tribal” styles, and distinctions between “traditional” and “contemporary” art from Africa. Youmbi commissioned a traditional Bamileke ku’ngang mask from craftspeople in Cameroon, but had the face rendered in a “foreign” Dogon style from Mali. He then had this “Two-Faced Mask” authorized by the chief of the Ku’ngang Society, and it was ritually empowered and used by fellow artist Hervé Yamguen for his initiation into the Ku’ngang Society, which Youmbi filmed and photographed as “fieldwork.” Youmbi highlights the ambiguous status of the resulting components with museum-type labels that consider the objects both as contemporary art and as ethnographic artefacts. Another hybrid mask integrates a Scream mask, based on Edvard Munch’s eponymous painting, into a Bamileke elephant mask, called so.

Bobson Sukhdeo Mohanlall was a pioneer in African studio photography. Founded in Durban in 1961, Bobson Studio was among the first studios in Africa to offer color prints, perfect for capturing Mohanlall’s Zulu clients’ outfits, which blend urban and “traditional” wear. Axis Gallery has represented Bobson Studio since 2000, and after Sukhdeo Mohanlall’s death in 2003 restored his medium-format negatives to produce an estate-authorized edition with the original Bobson Studio stamp.