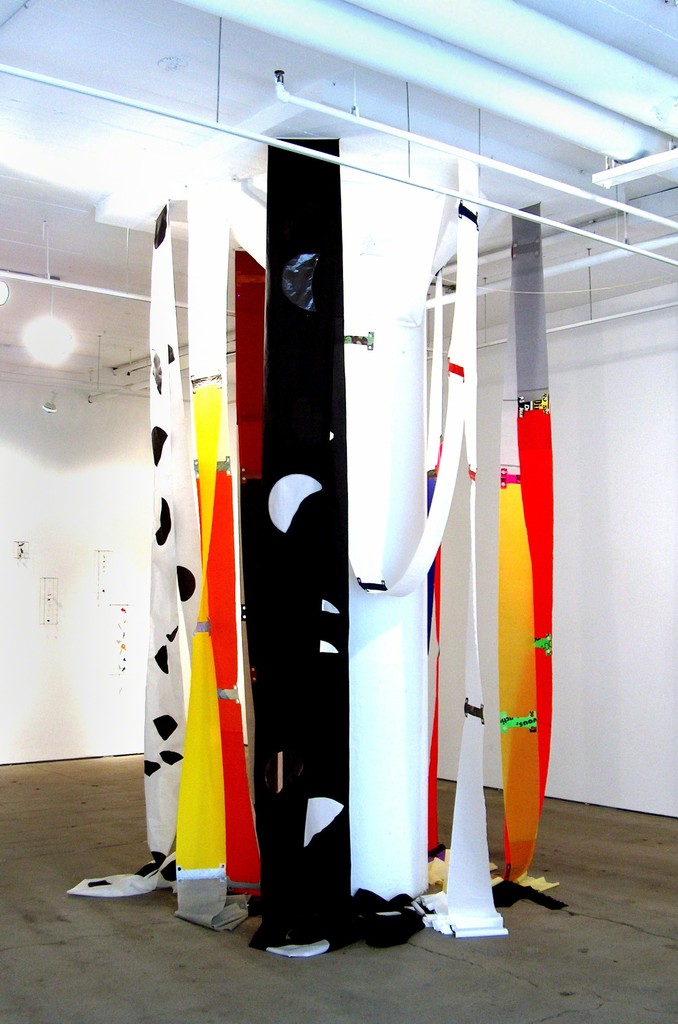 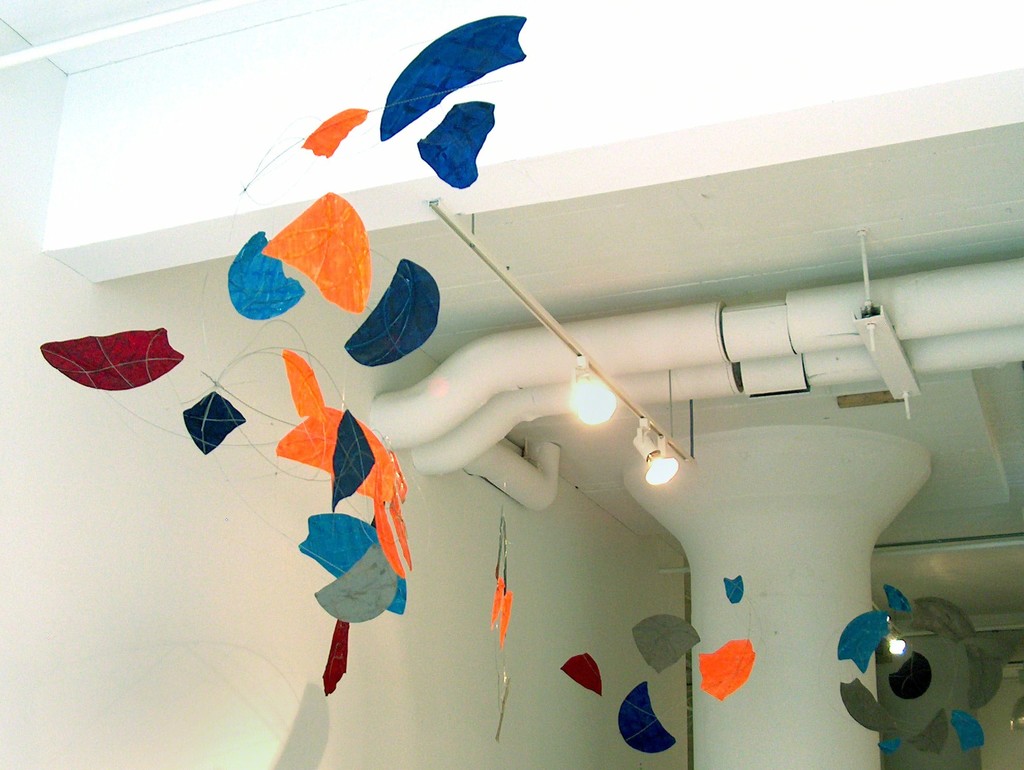 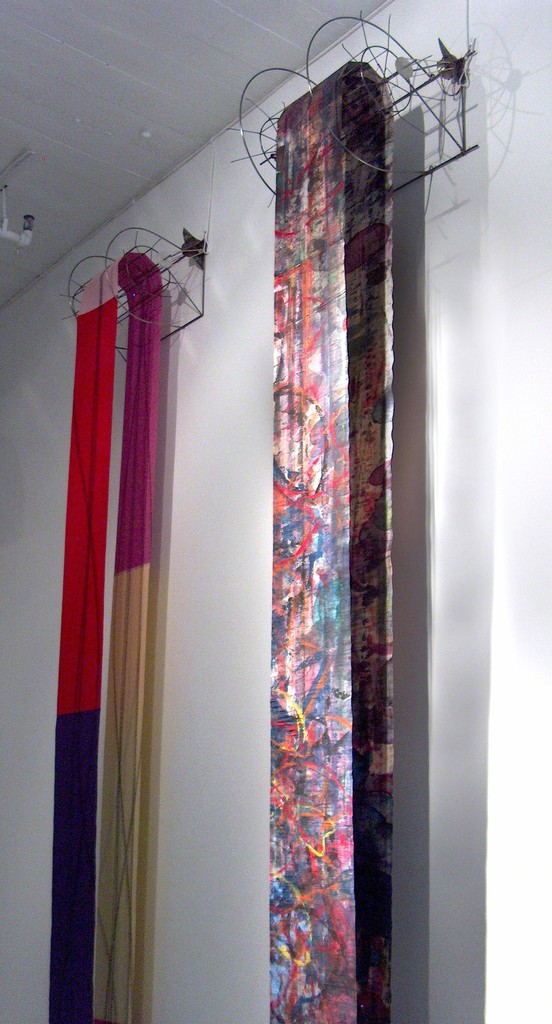 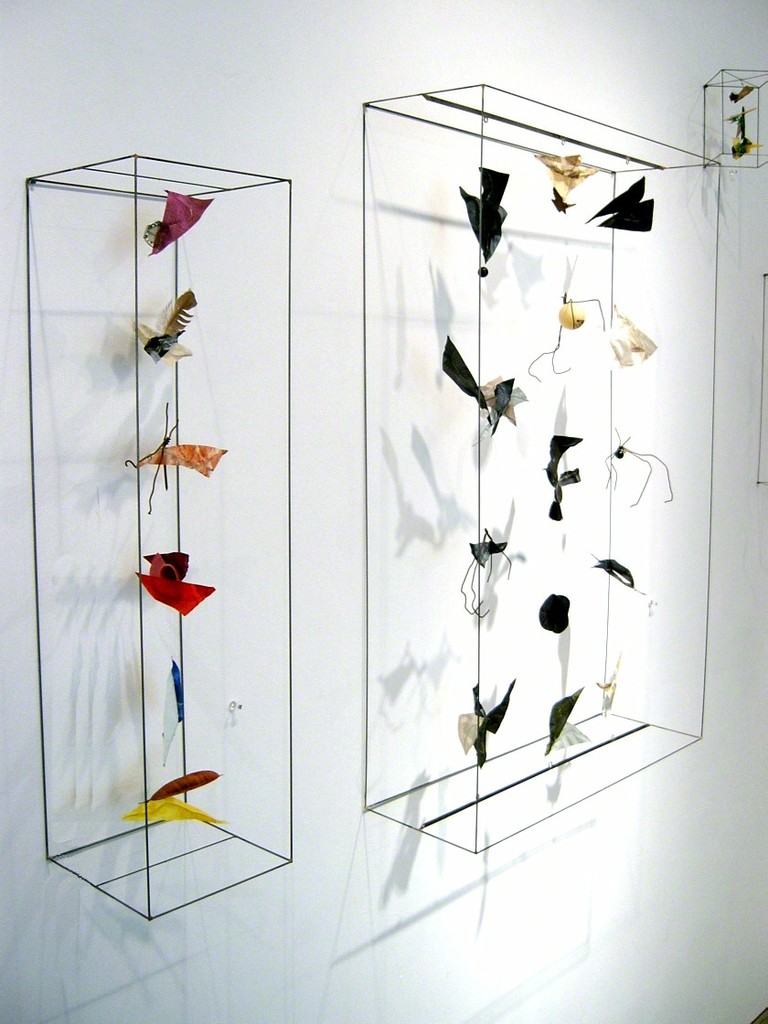 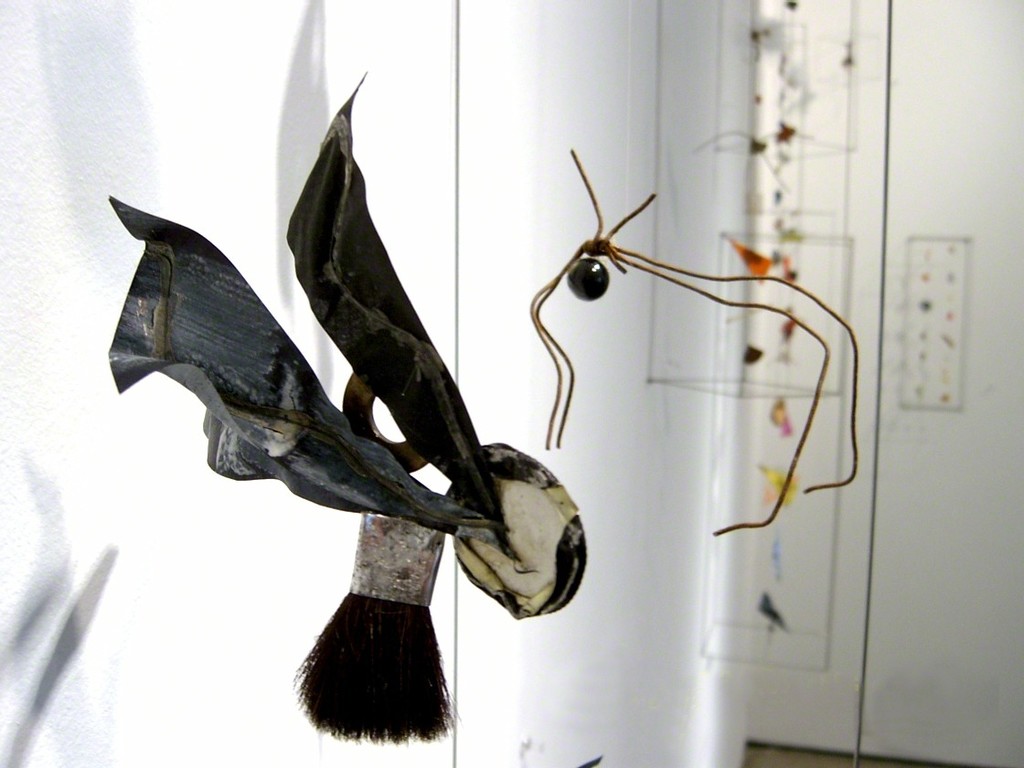 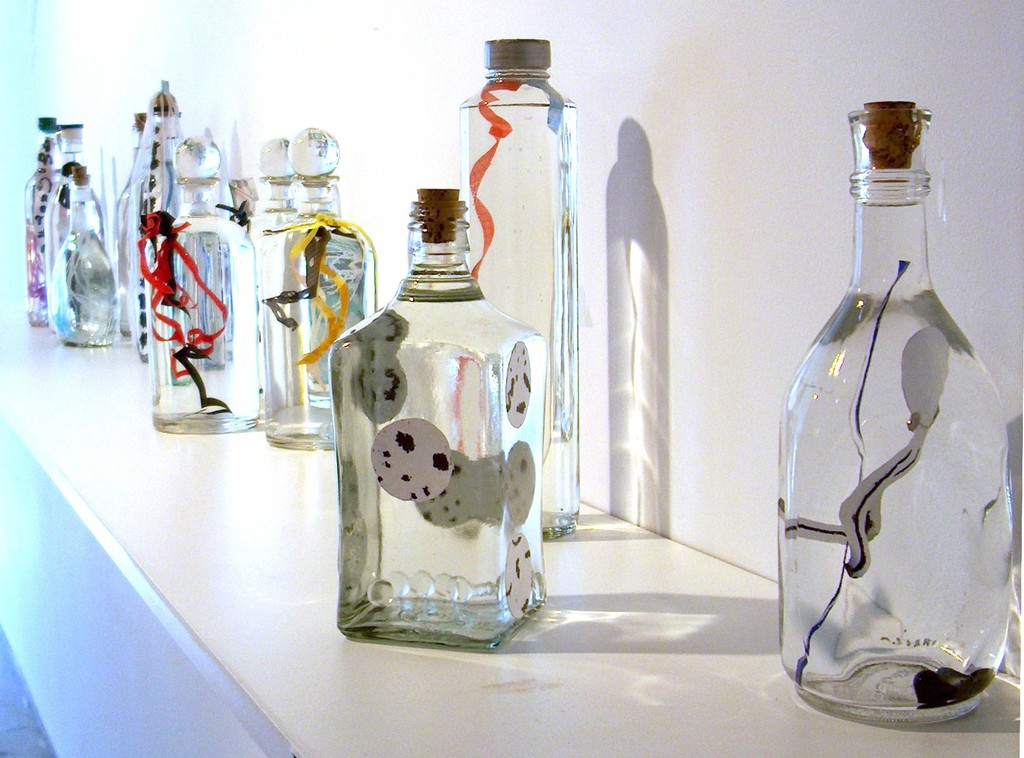 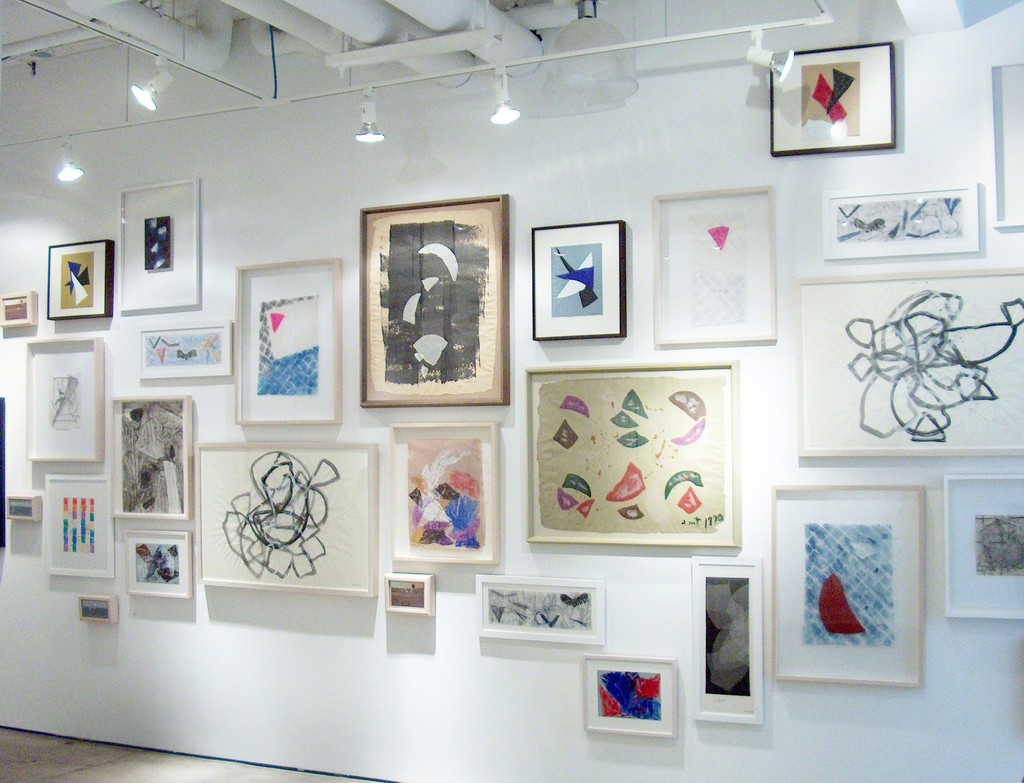 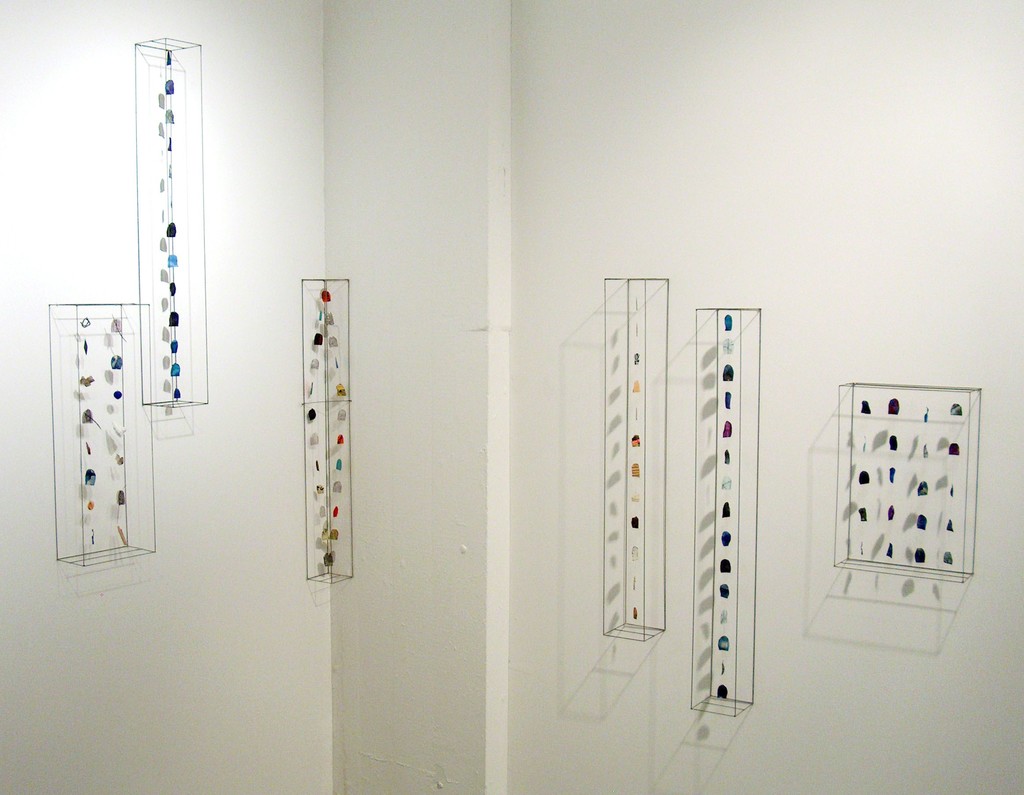 ZONE: Chelsea Center for the Arts is pleased to present an exhibition of artworks by Jackie Matisse that span a period of more than 20 years. Included will be examples of her famous hand-made kites and kite tails, mobiles, collages, assemblages, and graphic works. Video presentations of her collaborative projects on display include a film, “Tailing a Dream,” (1985) with composer David Tudor and filmmaker Molly Davies, and “Art Flying In & Out of Space” (2002 – 2005), a flat-screen interactive stereoscopic installation of her recent experimental work in super computing and “virtual reality” with David Pape of the Department of Media Study, University of Buffalo.1

Jackie Matisse grew up in Paris and New York in the ambience of Constantin Brancusi and the Surrealists, and many of the artists associated with her father, Pierre Matisse, and his important 57th Street gallery. She had the personal experience of watching her grandfather, Henri Matisse, create his series of colorful paper collages. By the late 1950s she had started her own family and was assisting her stepfather, Marcel Duchamp, in assembling his Boite-en-Valise (portable museum) while finding her unique direction as an artist in the multi-dimensional motion of kites.

Kites have a rich tradition as objects of ritual display in Asian cultures and a kinship to the ceremonial unfurling of heraldic banners and flags. But kites also convey a popular image that can be shared in play with family and friends and are more modestly engaging and self-effacing than what we expect when we are experiencing “art.” By 1962 Jackie Matisse had begun thinking about kites as a form that could set art in motion. While taking a cab to the airport from NYC, she saw a single kite flying over Harlem that appeared to her like a “line drawn in the sky,” this image inspired her to draw “on the canvas of the sky” and create “Art Volant” (flying art).2 For Jackie Matisse, the emptiness of the sky marked with the “line” of a kite became a work of art.

All of Jackie Matisse’s works, and her particular imagery, imply transitory movement, either literally or metaphorically. Found materials, casually appropriated imagery, light-loving translucence, and freedom of movement are intrinsic qualities of her work. Moreover, her kite-flying is a form of performance art that embraces the random effects of “chance” in the natural environment; an appreciation of “chance” is the sensibility inherent in all of her various works.

The aerodynamic forms of Jackie Matisse’s kite heads and tails, and the simple curved forms that often appear on the tails, are deceptively ultra-modernist when they are displayed indoors in galleries. However, Jackie Matisse has found personal sources for her modernist imagery, transpose strategies that have enabled her to escape from the shadow of the artistic giants in her family.

In the late 1960s, during the period of the Apollo Mission and the first man on the Moon (which Jackie Matisse felt was “the deflowering of the Moon”), she discovered a source for images of the Moon’s shifting visage in the local market place of Nemours where a tableware vendor was breaking some of his dishes in the street to advertise his plates (“Buy them or I will break them!”). 3 The idea of breaking plates in order to get people to buy them, and the uncanny resemblance of the broken ceramic pieces lying on the street to the phases of the Moon, resulted in her use of broken dish shards as stencils for the simple shapes in her work.

Recycling imagery is part of the transitory character of her work. Her long-time friend, the artist and critic Suzi Gablik, has pointed out that Jackie Matisse “is unique in the way that Ray Johnson is for his unusual correspondence art. She is an original, a ‘gutter artist’ who makes art out of gum wrappers, bottles, and bits of trash that one finds on the street, or in a terrain vague (a vacant lot) – sometimes tying bits of this material together or suspending them on human hair gathered from her family and friends.” For her underwater kites she found a special fabric that had the specific gravity of water so that they would have a sense of weightlessness. Gablik has also noted that Jackie Matisse’s working methods always invoke an air of mystery and usually involve a “secret recipe.”4

Jackie Matisse has succeeded in bearing the culture of her unique family by creating art in her own visual language.