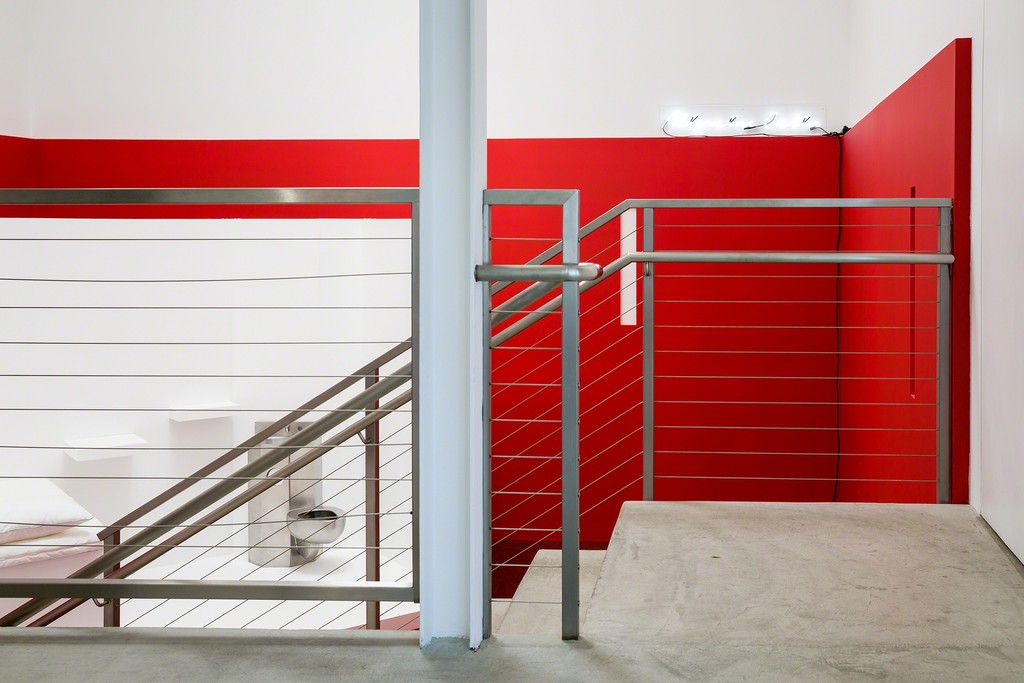 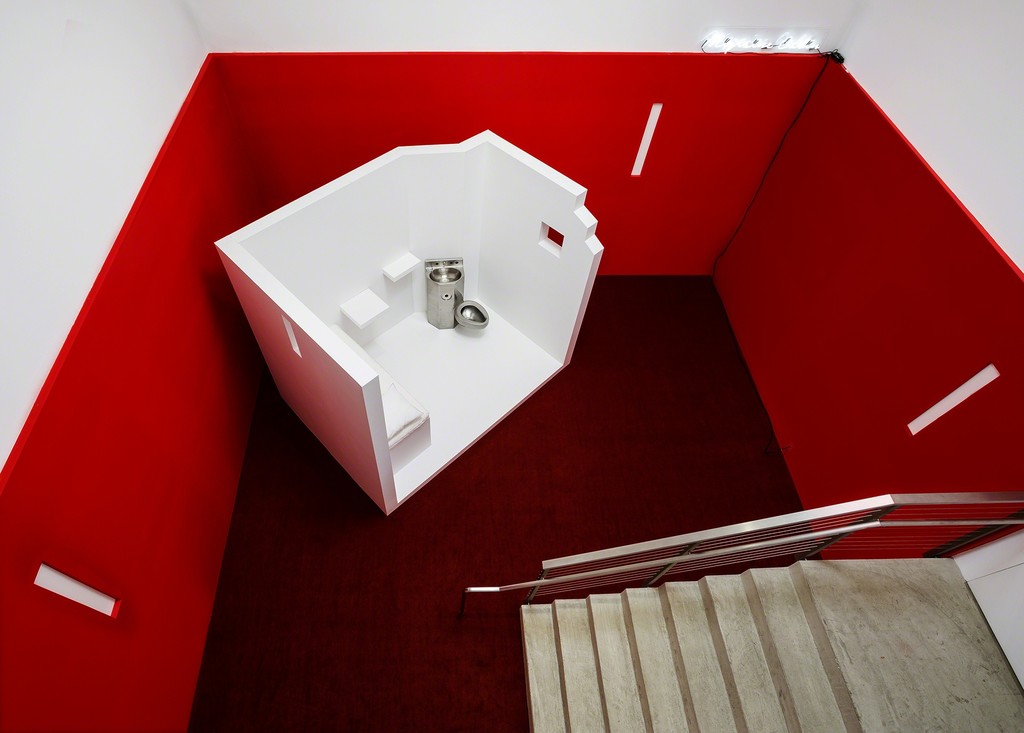 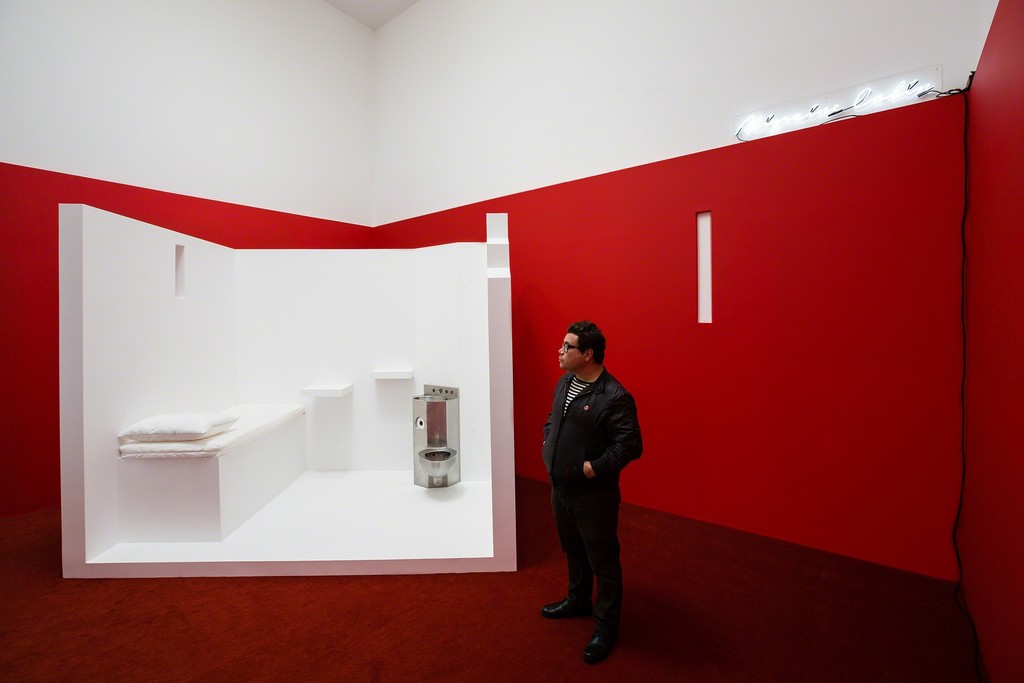 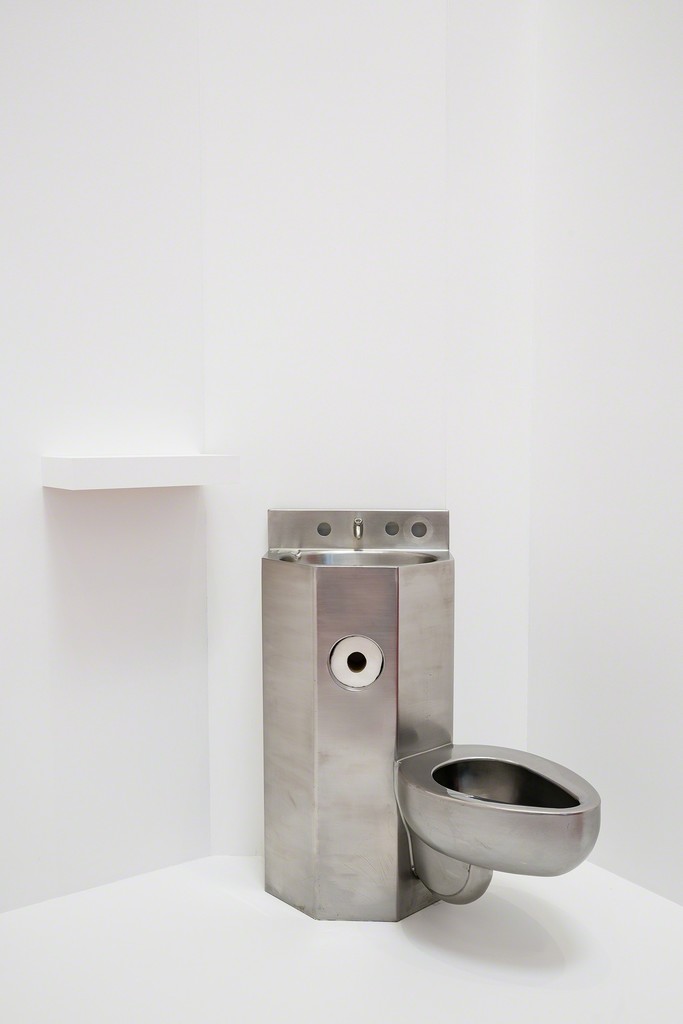 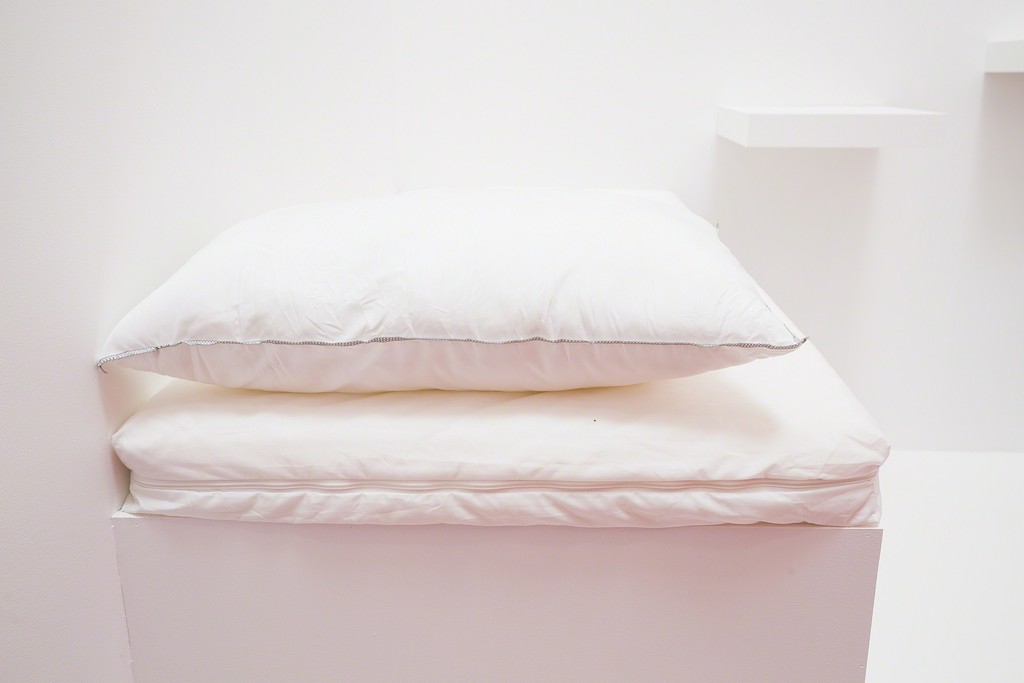 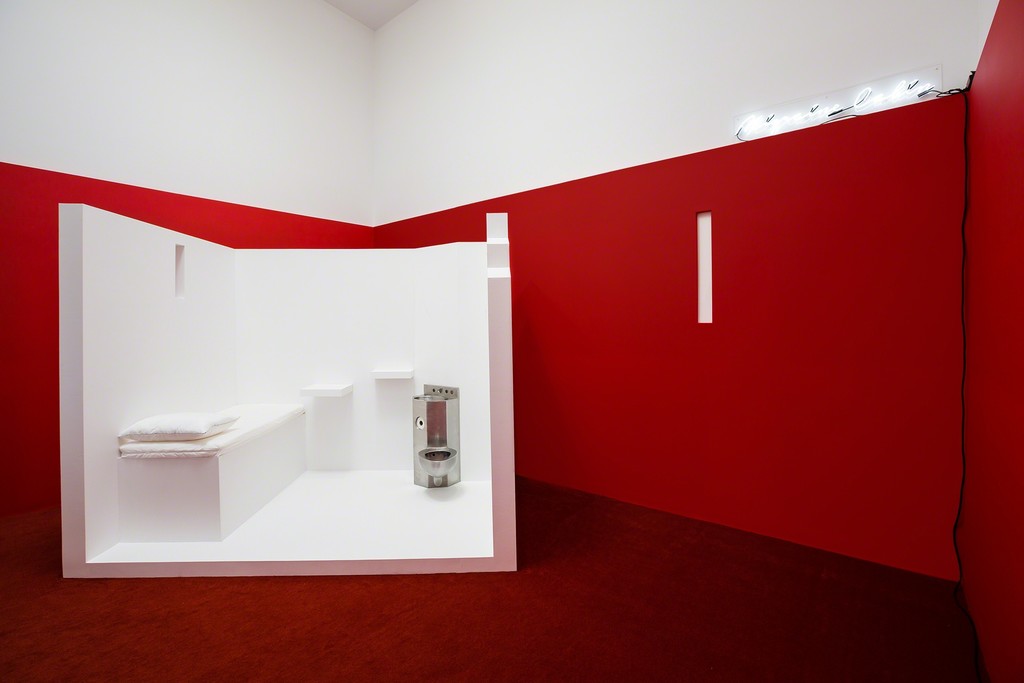 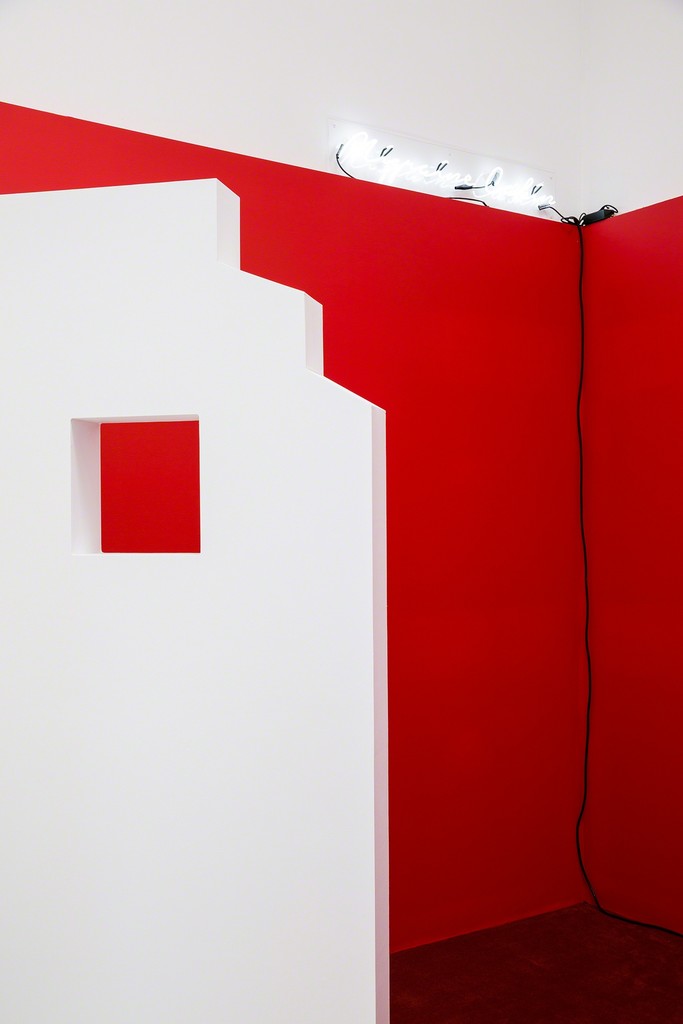 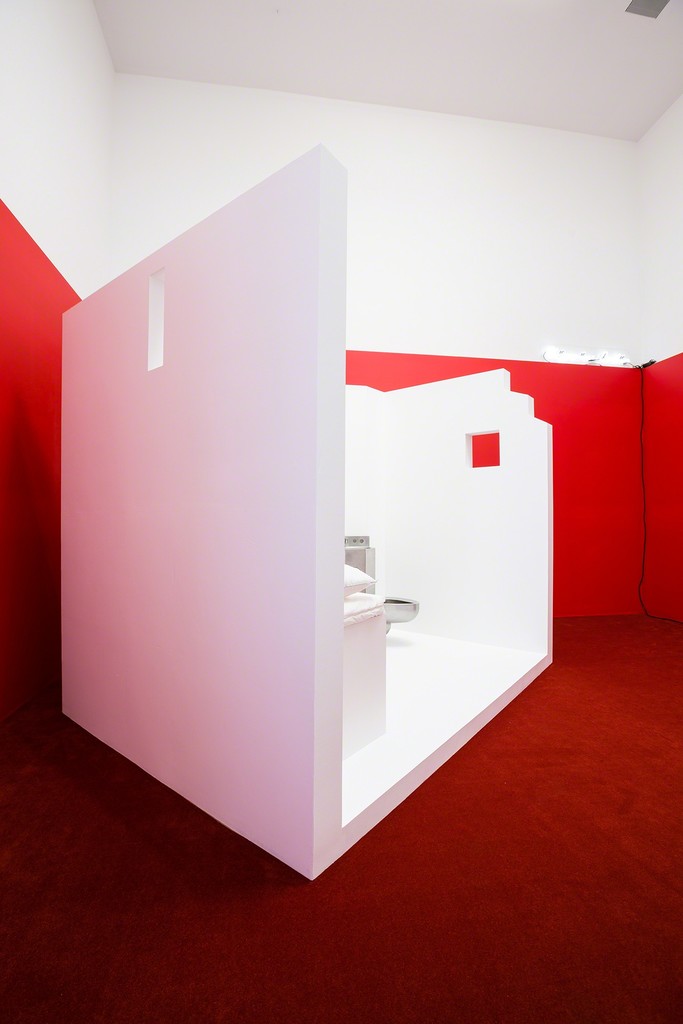 Baik Art presents Migraine Cabin, a solo exhibition of three-dimensional work by Los Angeles-based artist Marco Rios whose artwork points to the artist as a prisoner of the mind.

The exhibition will consist of an installation that fills the gallery space with a continuous 10-foot high wall surrounding a solitary enclosure. Along with several smaller objects that will also be presented, the enclosure, which replicates an accurate jail cell, personalizes the artist’s perceptual complexity and anxiety-riddled impulses toward events in daily life. The installation serves as a springboard for Rios’ ongoing commentary on being a twenty-first century artist imprisoned by anxiety and vulnerability.

One day, Marco Rios was driving while responding to a text by using the voice memo application on his cellphone. He spoke into the phone saying, “My brain can’t…” something or other. When he looked down to proof read his text, he saw that the phone had auto-corrected his message from “My brain can’t…” into “Migraine Cabin.” Oddly, the interpretation included the capitalizations, thus, inspiring Rios to use Migraine Cabin as his title for this exhibition. By starting with the title first, a title born out of a mistake, the artist worked to fill in the missing artwork for this show and in the process discovered an entire, previously absent, installation. This is the first time he worked in this way—backwards—using inductive rather than deductive analysis.

For Rios, Migraine Cabin felt like a specific place. Operating like a production designer, he started to imagine what it might look like. Visually and psychologically, it became a purgatory between the mansion in Ingmar Bergman’s Cries and Whispers and the extradimensional Red Room in Twin Peaks. In Bergman’s screenplay, crimson represents the interior of the soul, a moist membrane in shades of red and suggests that it is also an allegory for the interior of the womb. Rios determined that this place, Migraine Cabin, is a creative prison space of the mind filled with anxiety and melancholy, not unlike the headspace and memory cargo of Patrick McGoohan’s character in the British sci-fi television series The Prisoner which was first broadcast in the United Kingdom and the United States in the late 1960s.

Walking down into the installation, a viewer encounters an environment with objects that reference popular prison mythology, specifically the prison escape found in respected Hollywood movies. The dimensions of a freestanding enclosure inside the gallery space are based on a standardized solitary prison cell that one might find in a jailhouse or penitentiary. The slit windows, resembling the murder holes of a castle, implanted in the red relief walls are similarly based on contemporary correctional facility accouterments. An object made from soap, a common motif linked with life in lockup, brings John Dillinger to mind. He allegedly carved a gun from a bar of soap and coated it with shoe polish to help him escape from prison.