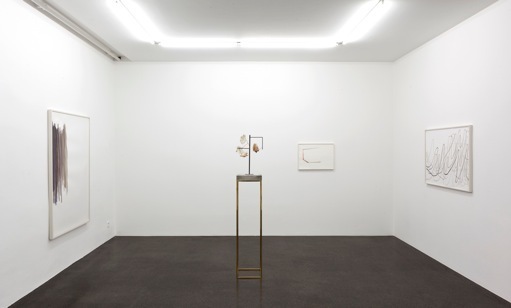 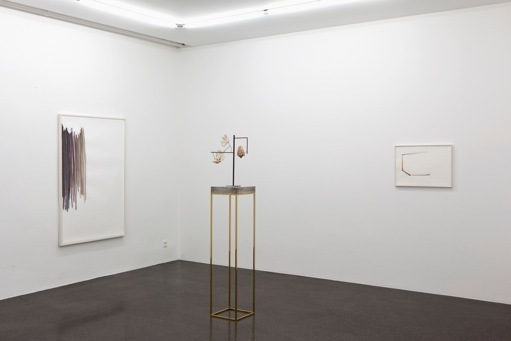 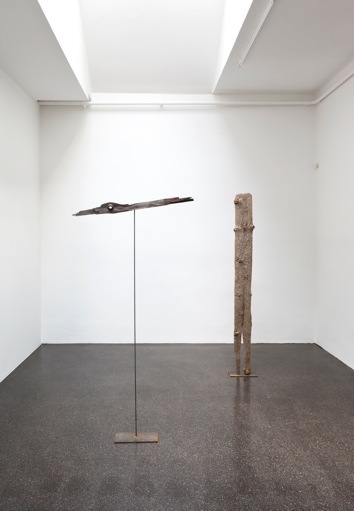 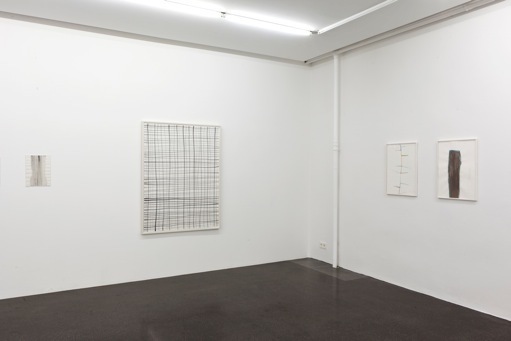 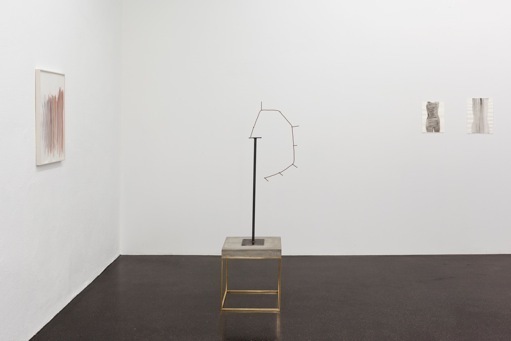 On the occasion of the 2015 ART WEEKEND MUNICH we are delighted to open an exhibition featuring sculptures by Carol Bove and works on paper by Silvia Bächli.

Both of these artists have developed their own formal language in their chosen medium.
In the exhibition these media enter into an exciting dialogue: whereas Bächli’s graphic works include sculptural and installation-based dimensions, Bove’s sculptures have something graphic about them, at times appearing like drawings in space.

Carol Bove developed her pictorial language while exploring the art and culture of the nineteen-sixties in California. The aesthetics of that era are also echoed in the works featured here: in pedestals made of gleaming metal and concrete that reflect the visual syntax of Minimal Art or in the use of driftwood and shells that appear like relics from the counterculture and popular taste of the hippie era.

Still, even independently of these specific references, Bove’s finely balanced compositions function as free structures in space. As in Bächli’s graphic ensembles, particular motifs also recur in Bove’s pieces, changing and joining together into dynamic arrangements in which disparate qualities exist alongside one another. The juxtaposition of diverse materials and surfaces is characteristic of Bove’s oeuvre: the organic is paired with the industrially produced, found objects are contrasted with formed items, and fragile constructions are grounded by weighty materials.

By contrast, Silvia Bächli’s works reveal the infinite variety of the line drawn with a brush on white paper. The most delicate color nuances and diverse degrees of dilution derived from gouache give rise to a rich spectrum of intermediate tones. Lines painted with a dry brush appear rough, whereas water allows them to flow smoothly. Layering and closed forms create an impression of heaviness, while delicate figurations rendered in translucent tones seem to float on the sheet. For Bächli, good drawings are “like sculptures, looming to various extents into the space in which we move.”

A quality shared by both artists is concentration. Nothing is superfluous. In Bove’s work the historical is condensed in the found objects. She only allows herself “to invent a form” if she feels “like it existed in advance of me.” In this sense her approach is not all that different from Bächli’s, whose gouaches have their starting point in everyday observations, in movements, and in things seen and felt. Her drawings evoke in the viewer vague images of the familiar, even as that which she depicts always remains open, incapable of being translated into words.