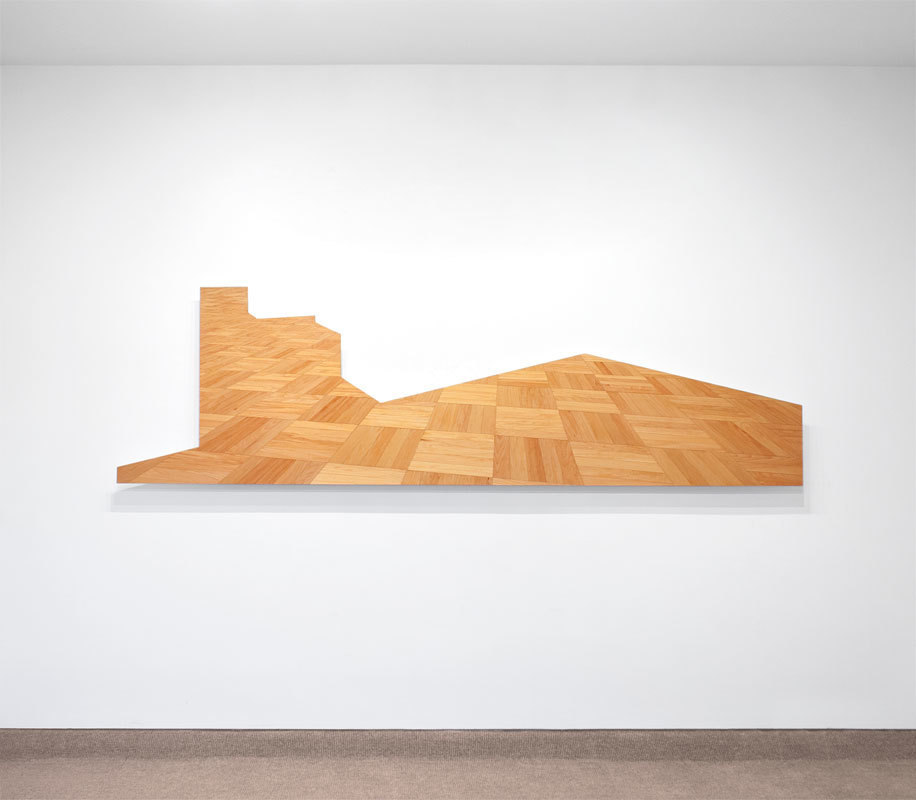 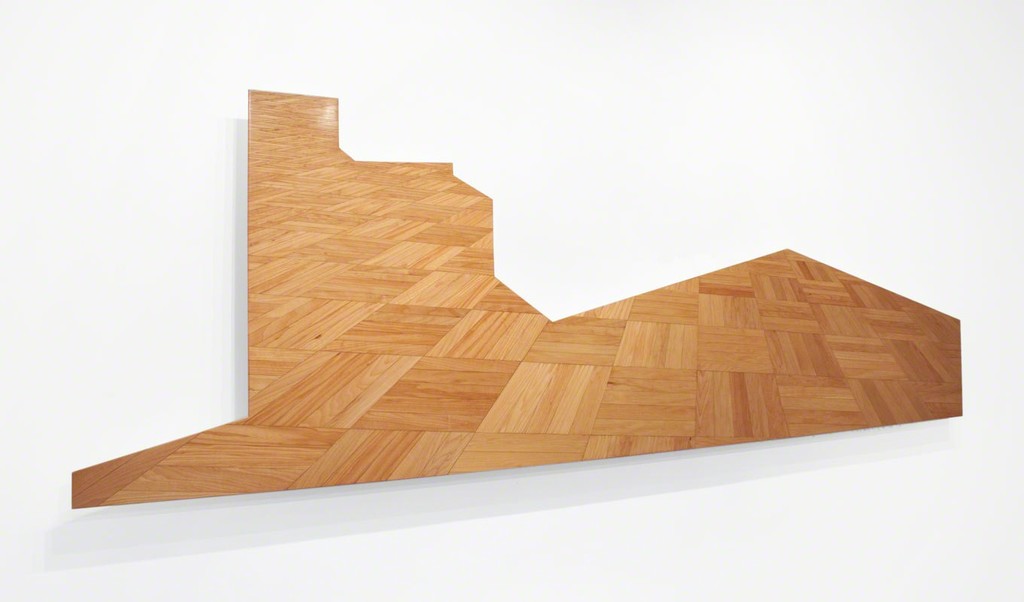 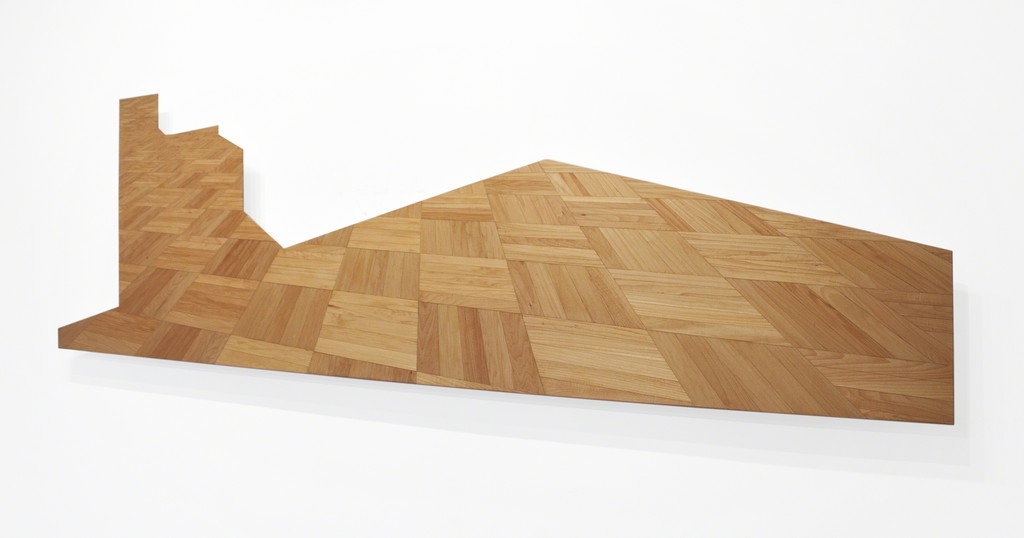 Walid Raad’s project, titled “Scratching on things I could disavow”, has been focused on documenting the building of new infrastructures for the arts in the Arab world. His project has concentrated on the material and immaterial conditions that alter, color or inflect the experience of Islamic, modern and contemporary “Arab” art. Raad’s works engage some familiar and peculiar architectural and display features (floors, shadows, frames, walls, views, etc.) that he’s encountered in various historical and imaginary, current and future museums in the Arab world.

The specific work on display in Barbara Krakow Gallery’s One Wall, One Work series is “Section 88: Views from inner to outer compartment_ACT VI_Scene II”. It consists of applied marquetry on a flat surface that is parallel to the wall. The marquetry suggests parquet flooring patterns, which in turn hint at receding space as well as the walls that define the floors’ borders.

The associated narrative for the work is written by Raad. A paraphrased version is below:

The Guggenheim Abu Dhabi is set to open on August 16, 2017 and today is that day. A proud resident rushes forward to the museum but can’t get in. He simply feels that were he to walk in, he would certainly hit a wall - literally hit a wall. On the spot, he turns around and addresses the oncoming crowd, “Stop! Be Careful! Don’t Go in!”. Within seconds, security services arrive, beat him severely and send him to a pyschiatric facility. The next day - a newspaper headline says “Demented Man Disturbs Opening - Claims World Is Flat”.

Raad’s conclusion to this narrative is, “This event has already happened. This headline has already been written. About this I am absolutely certain.” The importance of this statement cannot be over-emphasized. This specific piece is from 2015. It was prescient, piercing and poetic when it was made and perhaps even more so after the events surrounding the opening of The Palestinian Museum (it ocurred without a director, an exhibition or art on the walls).

Raad was born in Lebanon in 1967. He lives in New York City where he teaches in The Cooper Union’s School of Art. He is also a member of Ashkal Alwan’s Home Workspace in Beirut and the Gulf Labor Coalition. His work from the last 25 years has explored how events of extreme physical and psychological violence affect bodies, minds and culture.

Raad’s work has been shown in numerous international exhibitions, including Documenta 11 and 13 (2002 and 2012), the Istanbul Biennial (2015), the first Vienna Biennale (2015), the Whitney Biennial (2000 and 2002), the 2003 Venice Biennale, among others. As part of Gulflabor, he was included in the most recent Venice Biennale (2015). He has had one-person exhibitions at the Hamburger Bahnhof, Berlin (2006), the Reina Sofia Museum, Madrid (2009), the Whitechapel Art Gallery, London (2010), Museo Tamayo, Mexico City (2011), Carré d’Art, Nîmes and MADRE Napoli (both 2014). His work is in the collection of the Museum of Modern Art, the Whitney Museum of American Art, the Walker Art Center, the Kunsthaus Zürich, the Centre Pompidou and numerous other institutions. He is the recipient of the 2011 Hasselblad Award. Raad is currently the subject of a mid-career retrospective that began at the Museum of Modern Art, New York (October 2015 – January 2016) and just closed at Boston’s Institute of Contemporary Art (2016). The exhibition’s final stop will be Museo Jumex, Mexico City (October 13, 2016 – January 14, 2017).