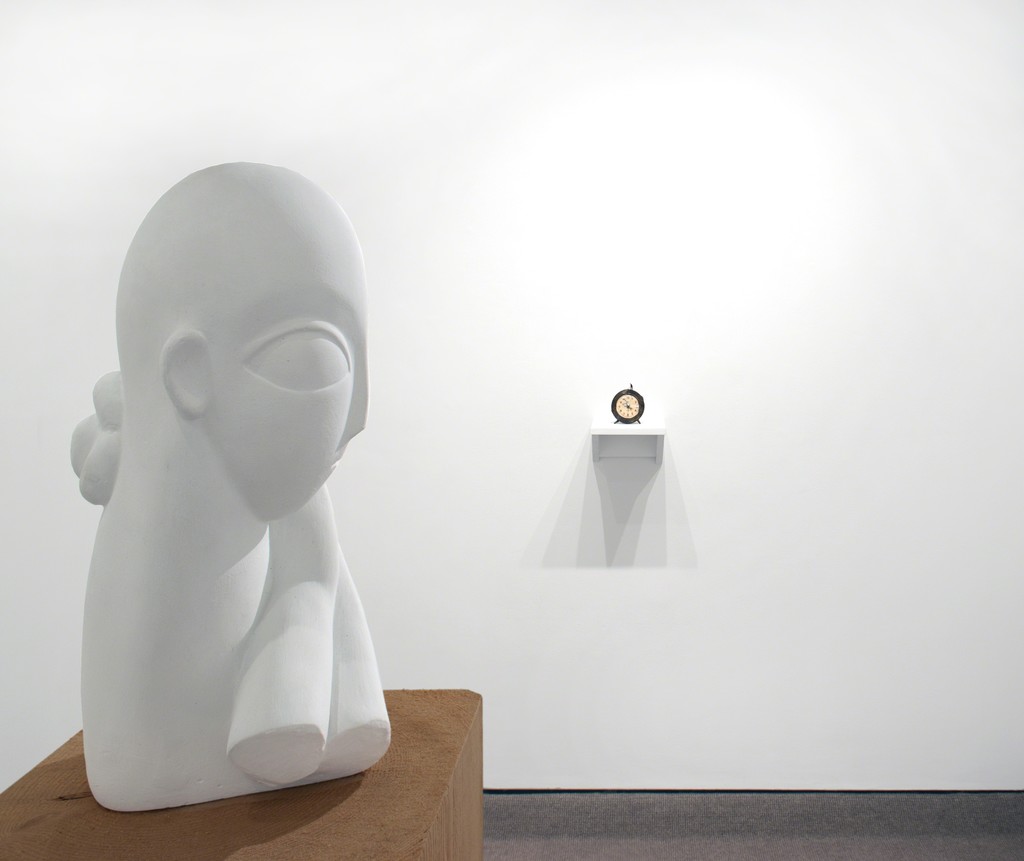 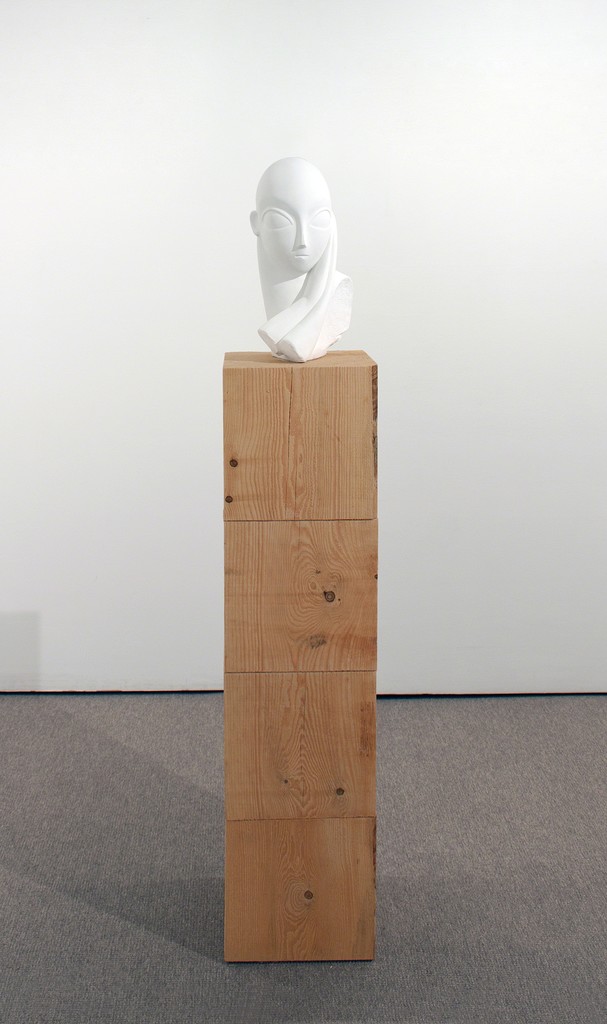 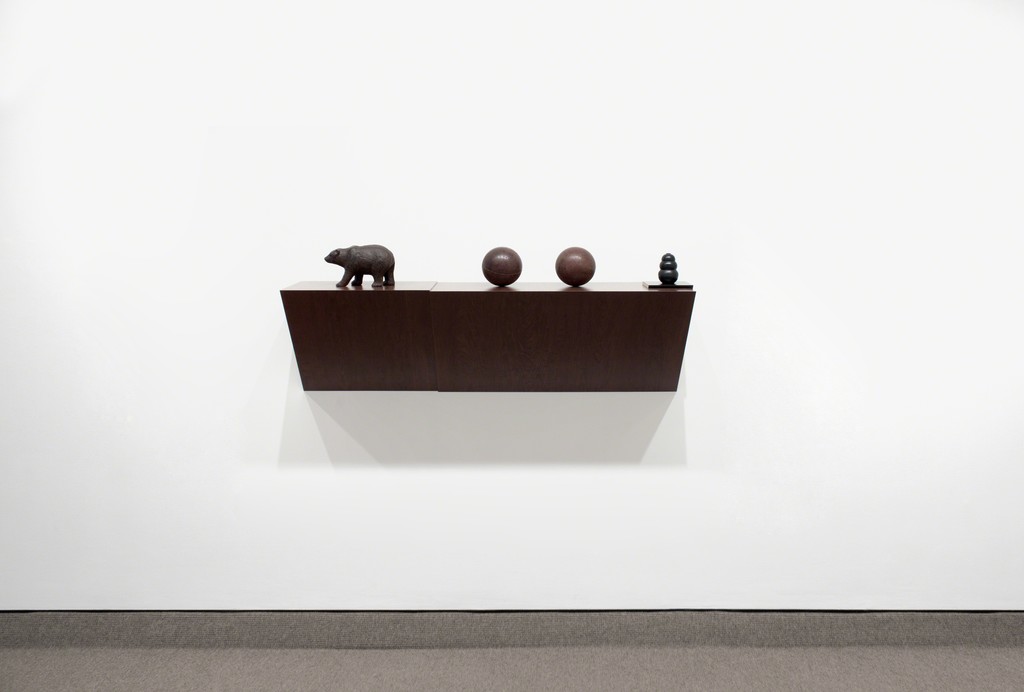 RELATIVES consists of works by four artists. Each of the artists engages found or preconceived objects in a different and specific way. The juxtaposition of approaches, as well as materials, as presented in this exhibition, will hopefully situate both the similarities and different viewpoints of each artist and her/his work.

Haim Steinbach’s “bear with me” examines comprehension, familiarity, repetition and time. The work consists of found objects (a bronze bear statuette, two wooden bocce balls and a Kong rubber dog chew) and a skillfully crafted and artistically specific ‘shelf’. This single ‘shelf’ (truly much more of a sculptural element than a shelf) has three ‘sections’ - one for each form. The substructure is made from plywood with skillfully adhered veneer. Two surfaces are left without veneer and thus poetically state that they are unfinished and that more ‘sections’ of the ‘shelf’ could be added. On each ‘section’ is a found object with similar formal properties. The dog chew is three interconnected spherical forms. The bocce balls are each a spherical form. The bear is rotund and can be viewed [with some imagination] as being one, two or three roundish forms. Steinbach’s juxtaposing these three forms and placing them so specifically on such a specific support structure (the ‘shelf’) are his main gestures. He not only gives the viewer the opportunity to see the formal relations, but also causes a situation of wonder about materiality (bronze, wood, rubber, veneer) and about interconnected-ness (playing with a dog, playing a game of leisure and perhaps the game of hunting). Most importantly, as emphasized by the veneer and the lack-there-of - Steinbach asks the questions of connections and relationships - what else could be connected, how deep or superficial are connections and what is the history of any of the situations or support structures to help create or expand those situations.

Jonathan Seliger’s “Untitled (with bulb)” is made from bronze that has been nickel-plated and painted. Taking the vintage design of a General Electric lightbulb and its packaging, Seliger has created something new. The work is a simplification of the GE product as the variations, small text and tiny details are not present in the sculpture, yet each ‘significant’ aspect of each element has been painstakingly rendered through means that include industrial fabrication, design techniques and hand work. “Untitled (with bulb)” serves to present an isolated object for aesthetic appreciation that perhaps would not have otherwise occurred and to create a sense of balance as, while before the package served to protect the bulb and the bulb served to illuminate for the purchaser, now the bulb and package are of equal import to the viewer. The work is serious, humorous, pedestrian and highly charged, all at the same time.

Mike Bidlo’s “Not Brancusi” is a plaster work using Brancusi’s Mademoiselle Pogany as its source imagery. Of all the works in Brancusi's first American exhibitions, Mademoiselle Pogany attracted the greatest attention. Its detractors likened it to a hard-boiled egg on a sugar lump; others, more ‘enlightened’, saw in it the finesse and technical perfection of a Chinese jade. The features that inspired the most comments were the nose (likened to a bird's beak by some critics); the enormous, bulbous, almond-shaped eyes; the delicate treatment of the ear; and the snake-like hair knot (elegantly referred to as a chignon). When Bidlo was asked about how he goes about choosing a work to ‘replicate’, he responded, “… just what I find engages me, something that I’m interested in spending that kind of time with. It’s like a person. Before you spend time, you want to make sure it’s going to be interesting. I like the relationship between the master and the student. Each piece has new problems and each is different. They’re all an indentured servitude. There’s that subjugation that you have to put yourself under. It’s a give and take. There is work involved and during that time the greatest things are revealed.” In relationship to this, perhaps it is interesting to remember the quote by Ad Reinhardt: "We need to renegotiate constantly, to barter discipline and anarchy simultaneously. The art must be resolute and demonstrative, disquieting, including agitation, irritation, estrangement, vampirism, transference, possession; an art which has elements of self-denial and impropriety simultaneously. I want the work to fool as no other.,” and in response, Bidlo has stated, ”I make art because it enables me to change hierarchical relationships, to represent reshiftings and to recontextualize because I’m omnivorous, and obsessed. I make art in order to rematerialize." In that way, Bidlo is doing the same as what Brancusi did, with the same form, in a different era with a different technique.

Liliana Porter’s “To Repair It”, while perhaps the smallest physical work in the exhibition, deals, quite blatantly with the incredibly large topic of time and control. Utilizing an old, broken clock and a found figurine, Porter presents a scenario where the figure is, in some way, attacking the clock. The figure is smaller than the clock. The clock is in pretty bad shape (not only does it not work, but the hands are bent and broken so it doesn’t even follow the maxim that a broken clock is right twice a day). The action of the figure is, seemingly, jack-hammering the top of the clock. Poetically, time is huge, broken and unrepairable. The figure has either caused this or is wanting to break it up further to either use for scraps, take up less space or some other more imaginative purpose. Putting all these ideas together is quite a metaphysical quandary, created efficiently and humorously with two found objects. As for the artist’s gesture, using materials sparingly but assuming a viewer’s imagination is large, Porter gets at the essence of the work, not only through the materials and process of creation but the viewer’s interaction.

As one can see, each artist has chosen her/his materials incredibly carefully in order to create a new work (much like a painter would control their paint to create a new painting). As for general themes, comfort, contention, familiarity, openness and originality play vital roles in these artists’ actions all with goals of expanded engagement, perception and understanding.