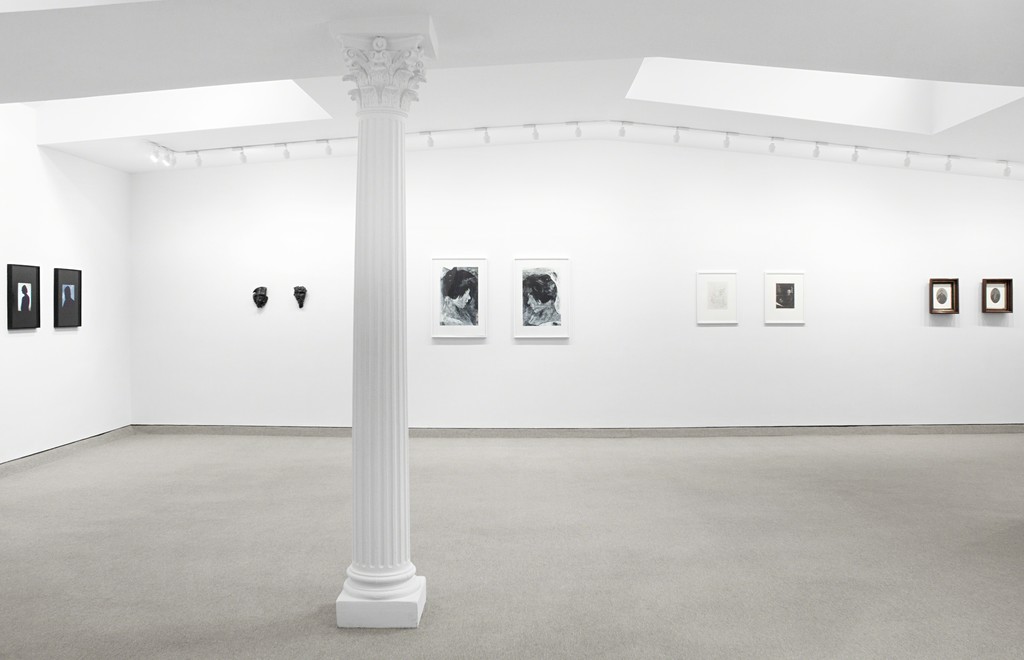 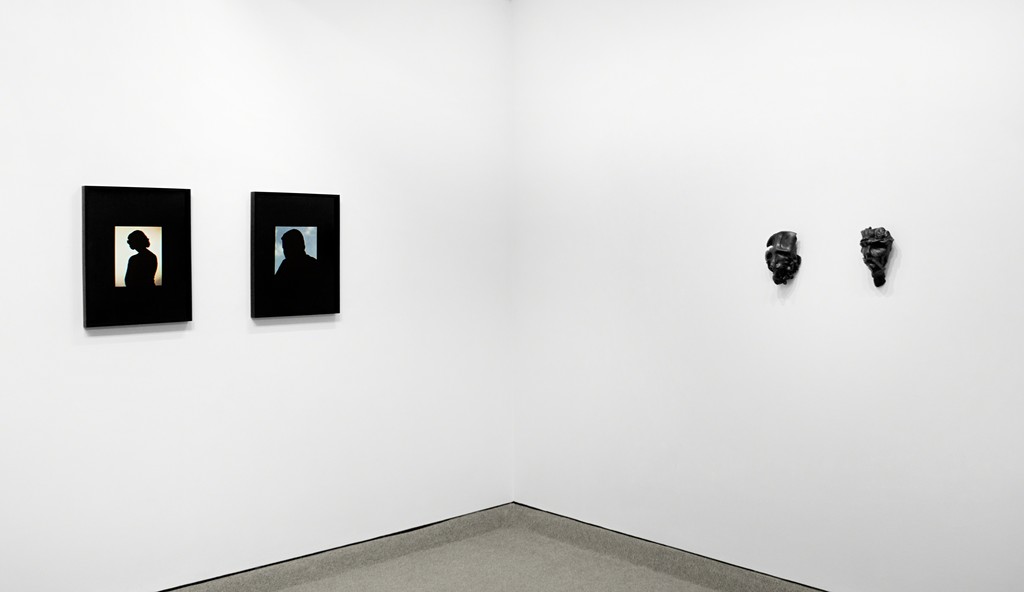 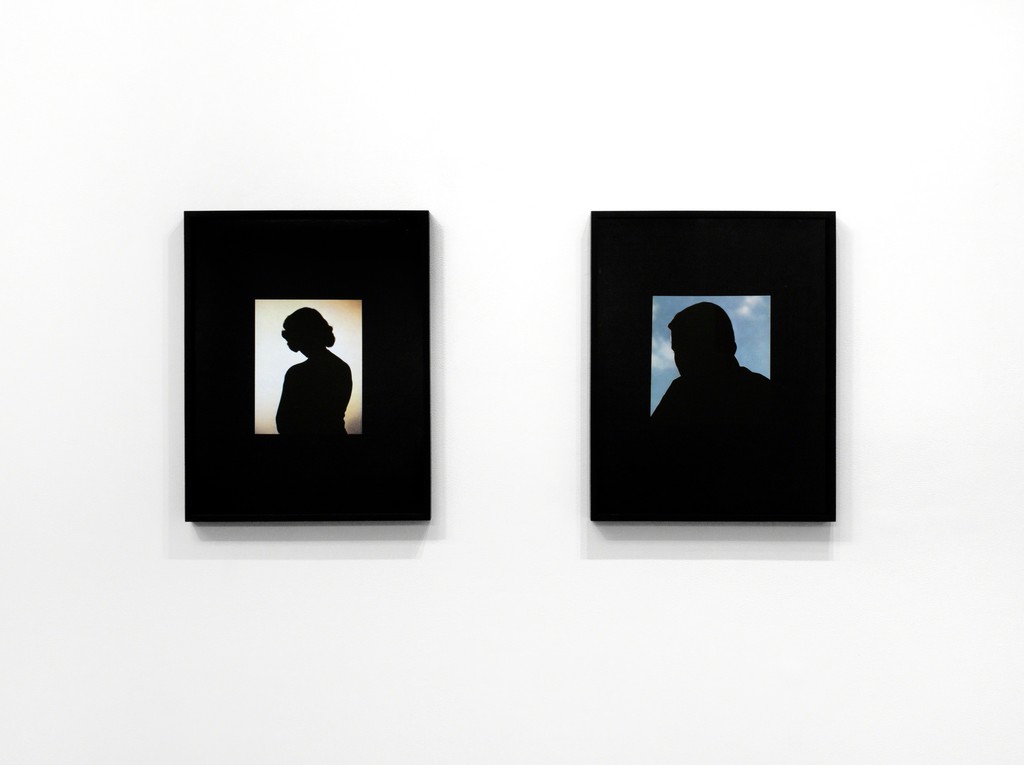 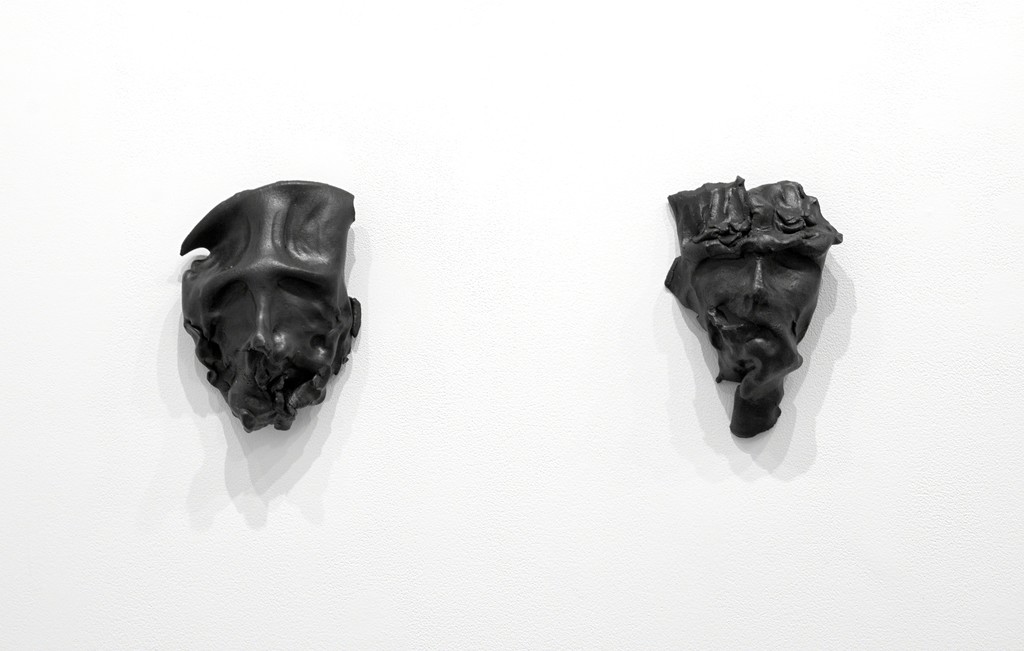 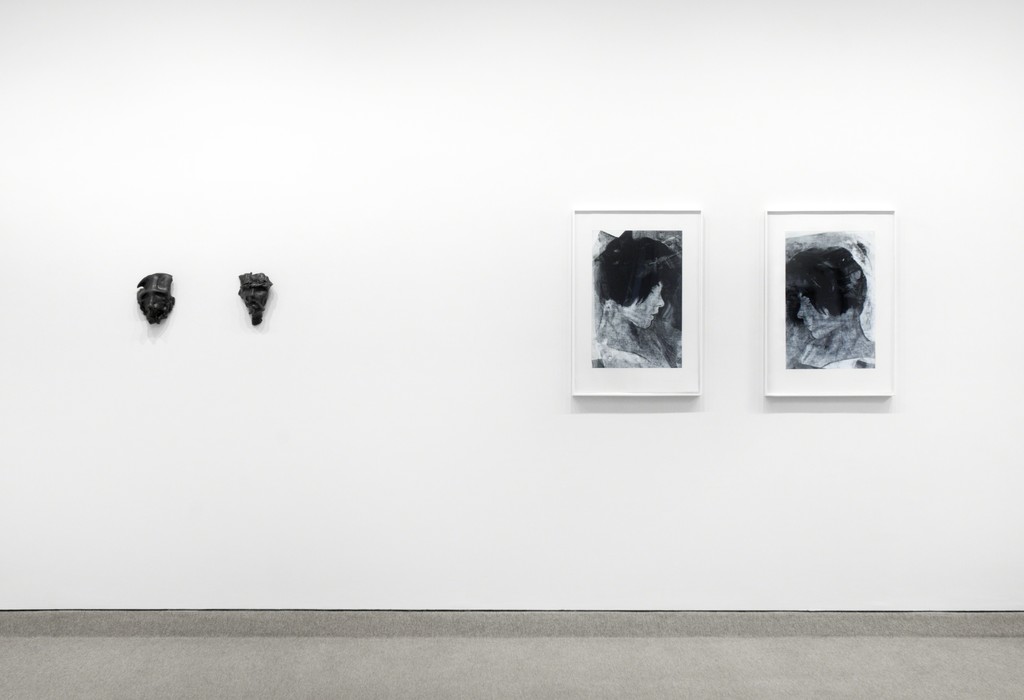 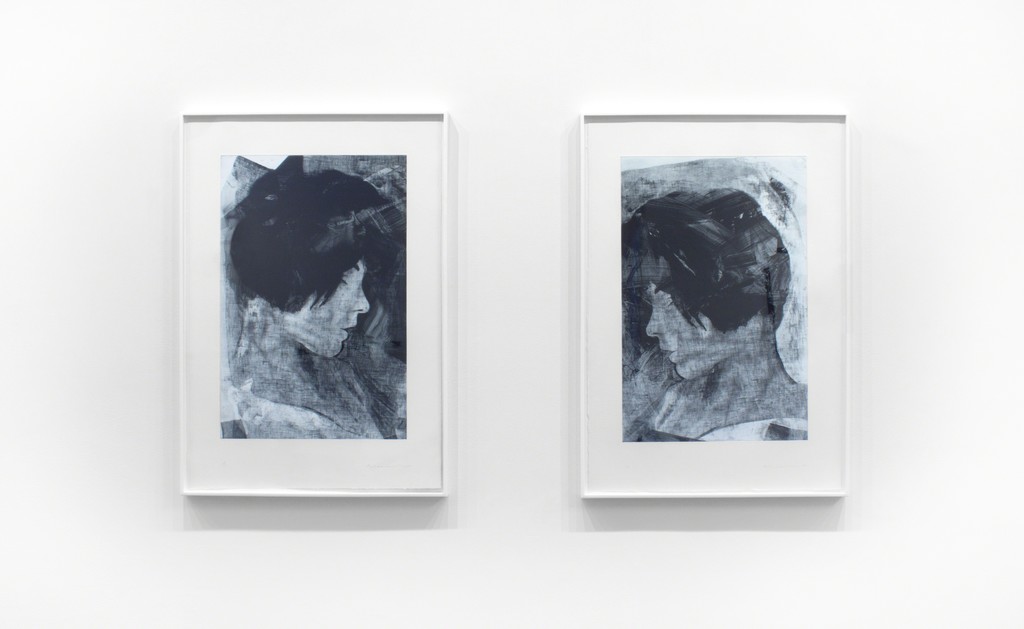 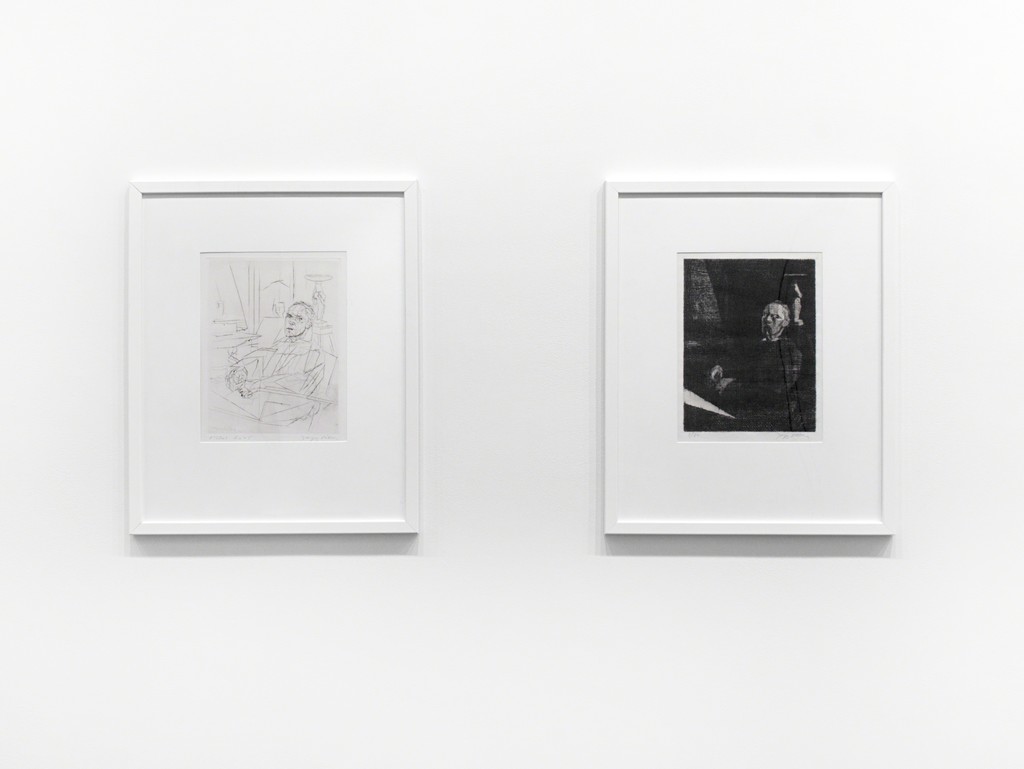 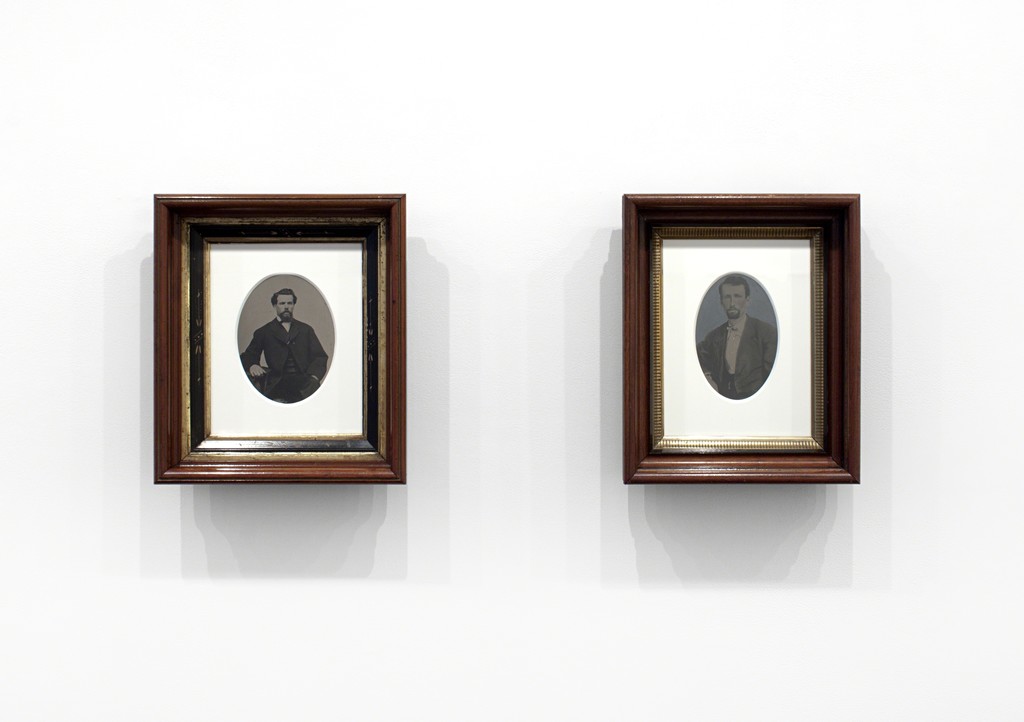 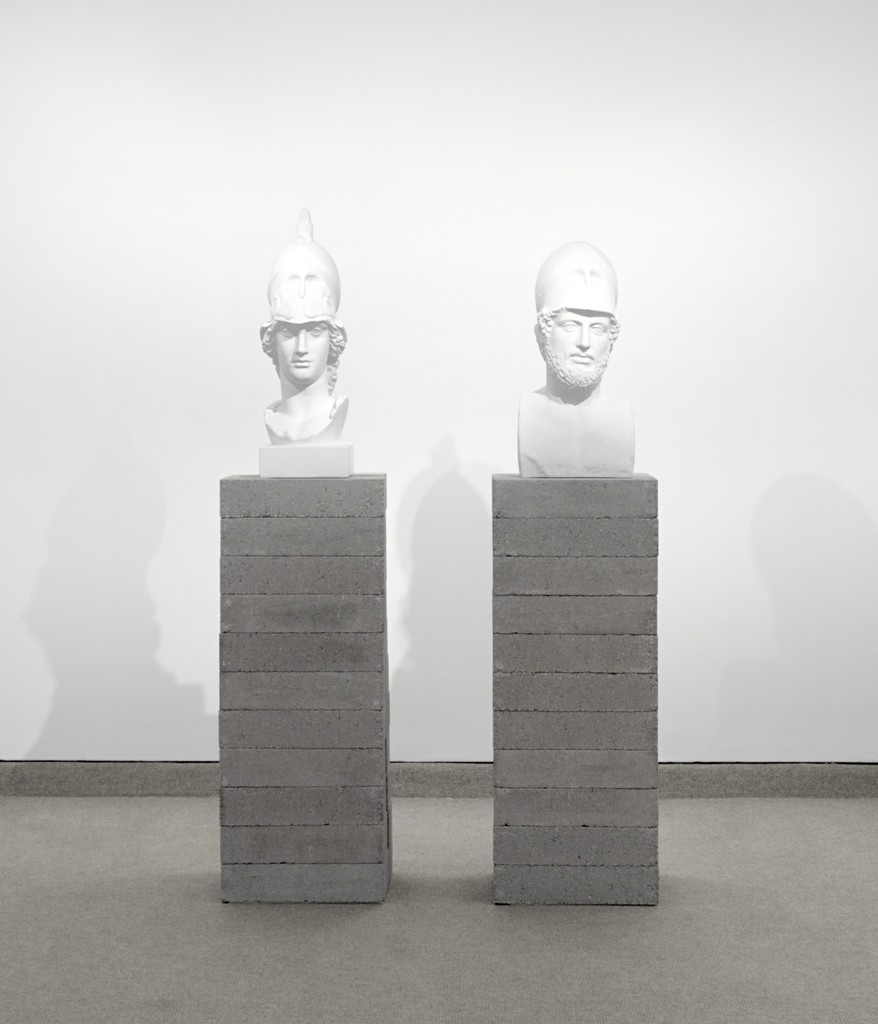 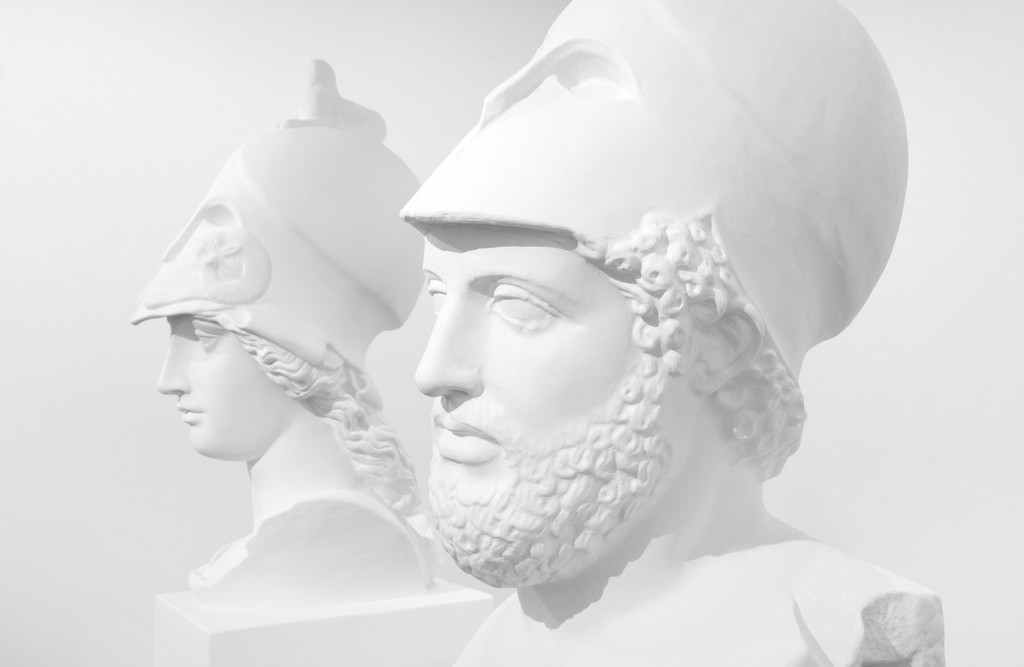 Wikipedia says that “a portrait is a painting, photograph, sculpture, or other artistic representation of a person, in which the face and its expression is predominant. The intent is to display the likeness, personality, and even the mood of the person. For this reason, in photography a portrait is generally not a snapshot, but a composed image of a person in a still position.” Wikipedia is definitively part of the 21st Century and yet, the idea of a portrait not being a snapshot, some would argue, is not a 21st Century notion. The exhibition, TWO/EACH, deals specifically time and portraiture.

In the late 1970’s, John Stezaker cut images film stars out of fanzines, leaving just the silhouettes in negative form. He took these clippings, layed them on black paper and called them “Black Star”. No longer of an individual, yet still a portrait, these images are now representations of a type, not an individual and since their specifics are removed, the specific era can only be imagined.

Liz Glynn’s ceramic masks display dramatic expressions created through a blind action wherein the artist applied a slab of clay to her face and crudely manipulated it. The mask was then removed from her face and subsequently pinched and poked it to emphasize certain seemingly emotional aspects of the improvised form. The masks, once fired have a dark matte charcoal surface and echo masks of ancient Greek theater whose exaggerated features presented the individual’s emotional state. Like Stezaker’s works, Glynn’s work between found form, created form, archetypes and the individual.

Matt Saunders’ works deftly display his explorations between painting, photography, and film. Saunders stretches the possibilities of traditional printmaking by bringing together multiple materials, such as oil paint, linen, various types of ink and mylar. His ruminations about medium and his particular interrogation of the qualities of materials, are extended in this series of complex prints where the source is not immediately known, the time period is mysterious and the materials used are layered, thus the emotions one reads into the subject cannot help but to engage both the techniques of image creation with the subject of the image, itself.

Because numerous of the artists in the show are looking at ideas of (re)creation and (re)production, it would be remiss not to incorporate an example of multi-state portrait etching and, particularly, an example as exquisite as Jacques Villon’s 1935 “Le Grand Dessinateur Assis”. Both the first state (a basic geometric drypoint outline of what would become of the image) and the final state (a deep and richly etched, highly contrasted image of “the draughtsman”) present the psychologically charged image of the the artist. By presenting the two states side-by-side, not only is the image of the draughtsman presented, but the presentation of draughting is actually enacted by presenting multiple moments (states) of the work.

Robert Bauer’s two tempera on paper portraits from 2013-14 also lay bare the act of making the portrait, but as opposed to the marks made through time being displayed side-by-side, Bauer builds up the quantity of marks so that they are almost all visible on top of each other. The end results are deeply personal portraits of not only the subjects but the artist-as-observer/interpreter.

Hendrik Kerstens could also be considered an interpreter. Since 1995, the Dutch photographer has been photographing his daughter. Initially Kerstens' photographs captured the fleeting moments of her childhood. There was a moment of revelation, though, when Kerstens not only saw her in relation to the events of her own life, but also projected on her his interest in the Dutch painters of the seventeenth century where the surface, so well crafted, depicts a scene of everyday life. Conceptually, Kerstens' photographs play with the dialog between painting and photography as well as seriality, and time. On a more emotional level, they address everyday reality while expressing his love for his child, and the knowledge and development of his craft.

The exhibition also includes several anonymous 19th century American tintypes that easily display their subjects’ attempts at stylish self-presentation just at the dawn of photo-production. Presented in the context of this exhibition, these works remind the viewer of the cyclical nature of fashion, the universal nature of self-presentation and the deep and long connections between various artists’ practices.

In terms of deep and long connections, Allan McCollum came up with a system that allows him to make enough unique shapes for every person on the planet to have one of their own. It also allows him to keep track of the shapes, so as to insure that no two will ever be alike. Over time, he has and will continue to make individual shapes and collections of shapes, all while exploring different means of fabrication. The two “Threaded Shapes” in this exhibition, more directly than other materials in the project, reference portraiture and, most specifically, silhouettes. While perhaps the biggest leap in the exhibition, McCollum’s shapes do serve as unique portraits and certainly stand strong when juxtaposed with the oval matting of the 19th century Tintypes, the silhouettes of Stezaker’s Dark Stars and the jagged forms of Glynn’s masks, among others.

Lastly, and as a means of both synthesizing and confusing some of the dynamic aspects of the exhibition, the gallery is exhibiting two plaster busts, recently cast from versions of the same moulds used by the Caproni Brothers, a business that, in the early 20th century, went to Europe to cast iconic sculptures from the vast collections of Europe’s great museums and then brought back the moulds in order to fabricate plaster casts for America’s new great museums’ demands for works of classical importance. The two casts exhibited here are casts from moulds that were recreated from the original Caproni moulds that were, in tern, made on the Roman copies of Greek original sculptures. The original sculptors are unknown and only as we get closer to the present are the various layers of craftsmanship known, yet our contemporary art context can hopefully not only add appreciation and knowledge of the stories of the Greek gods and goddesses and the subsequent Roman versions, but also to the full history of representation, appreciation and receivership of knowledge.