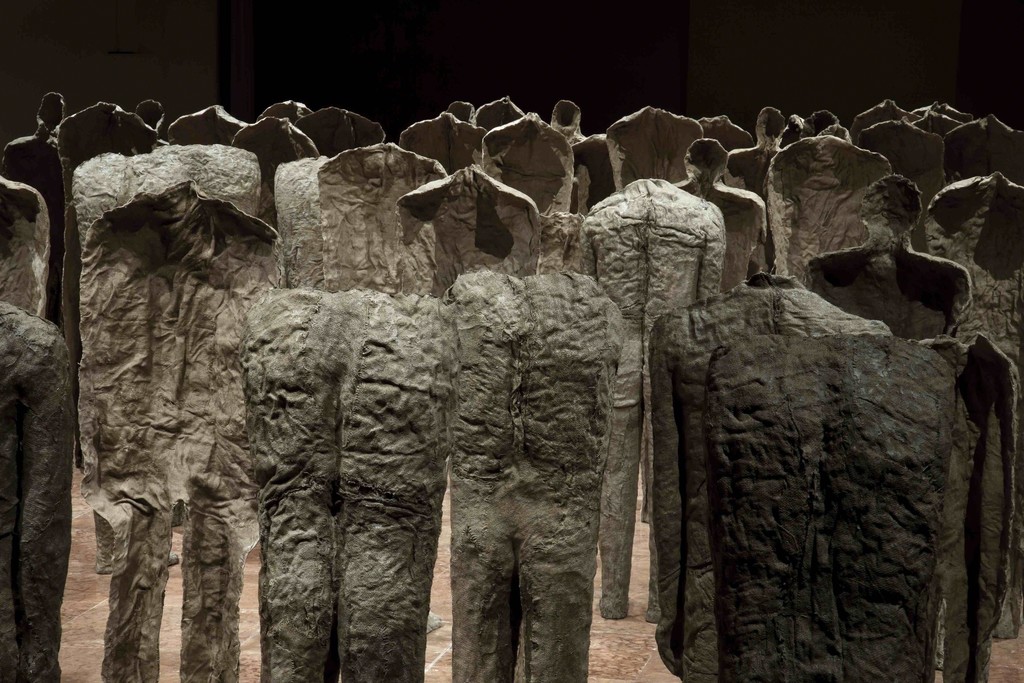 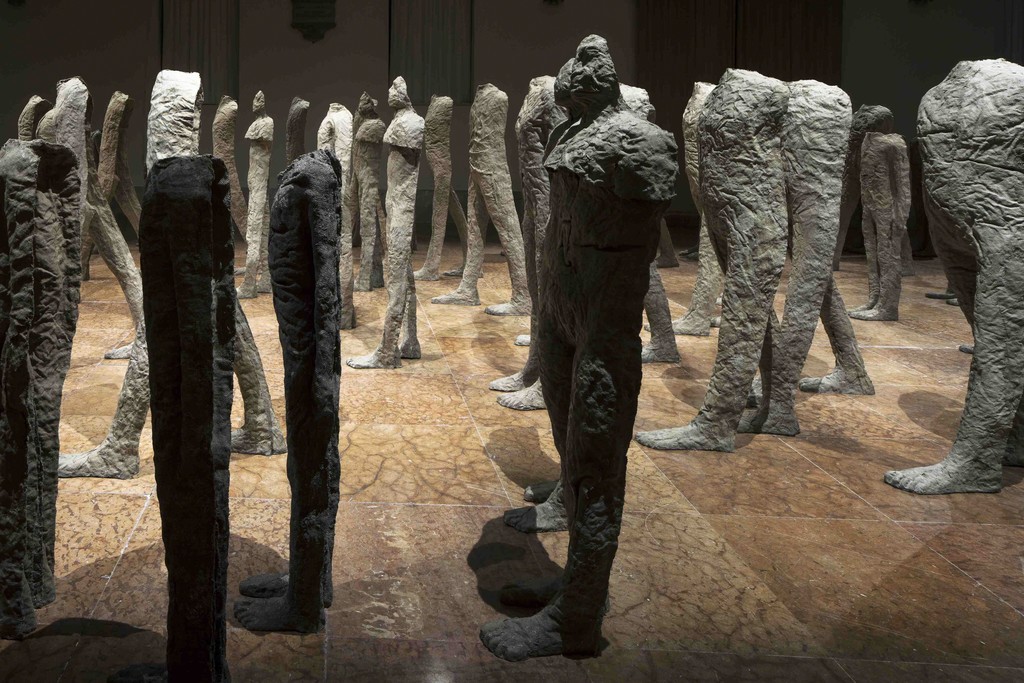 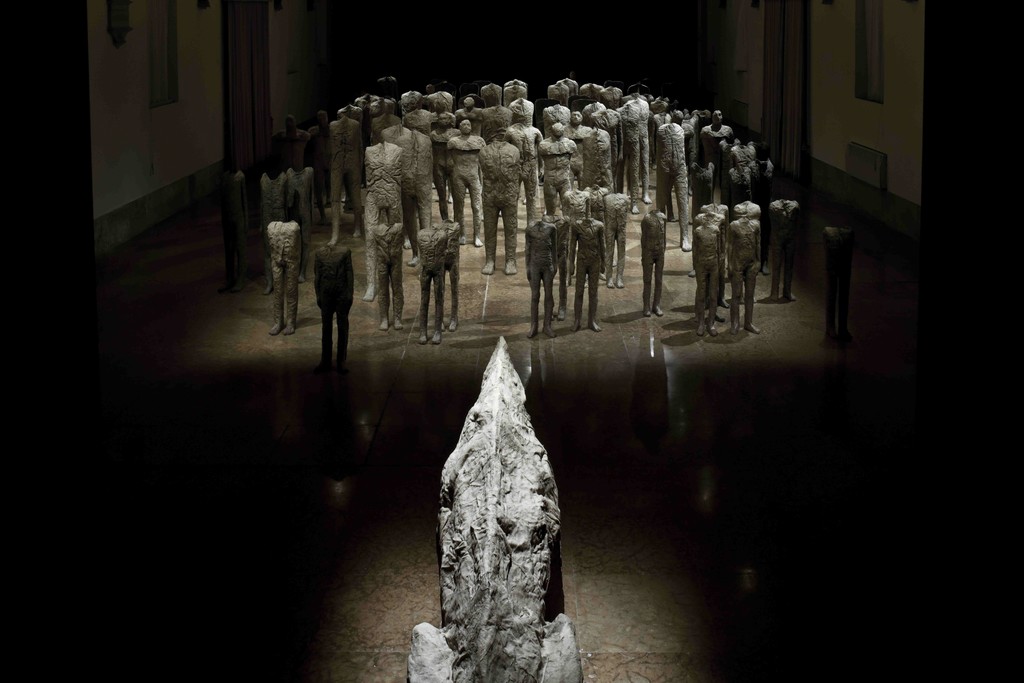 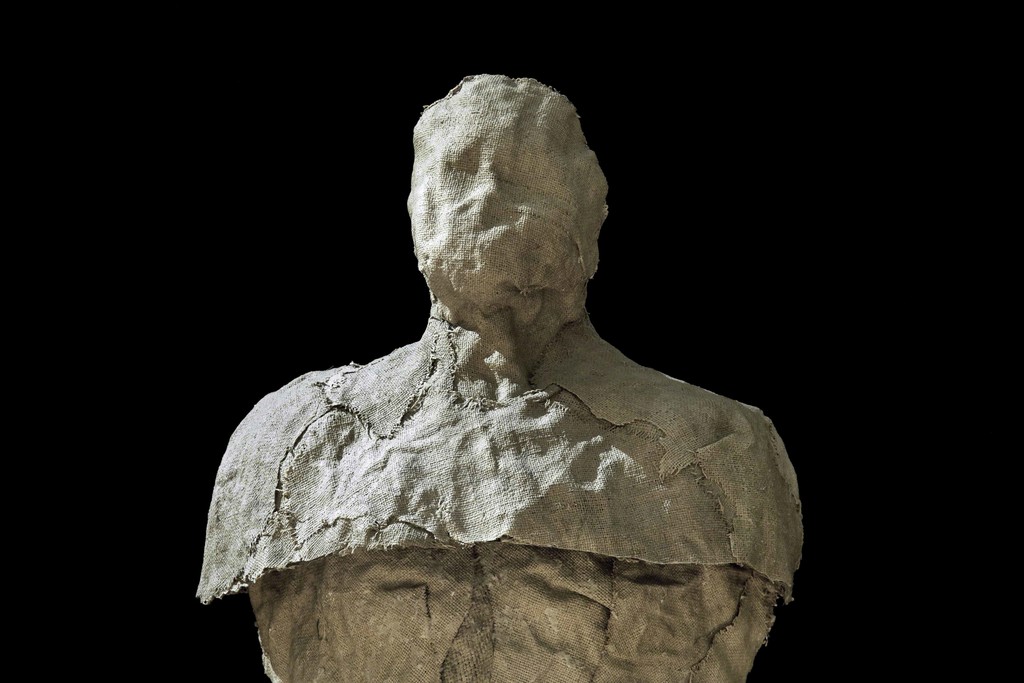 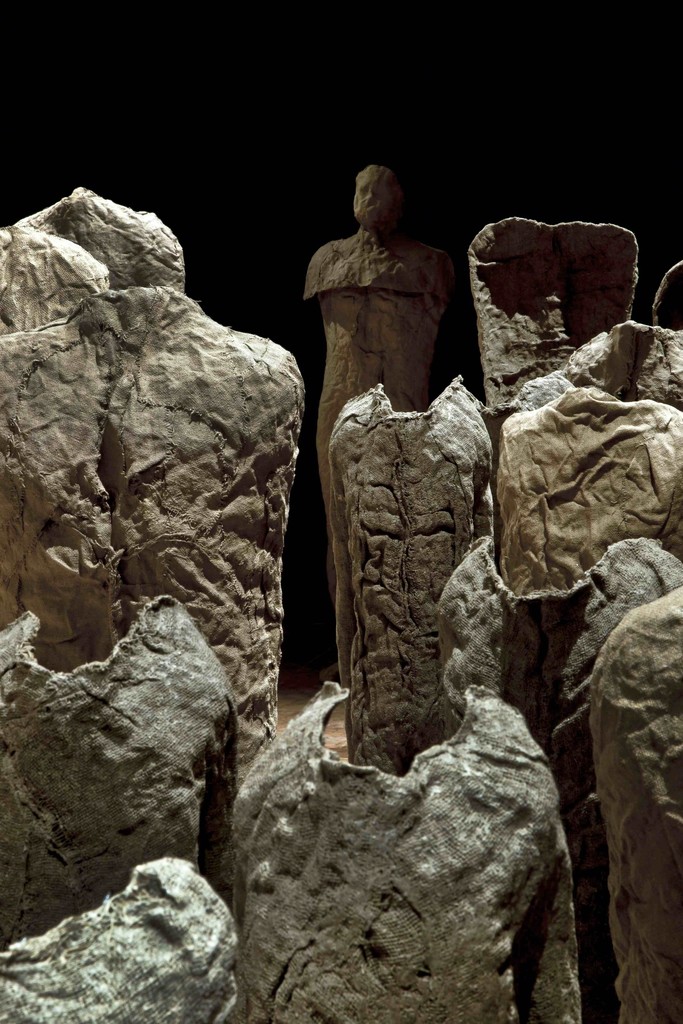 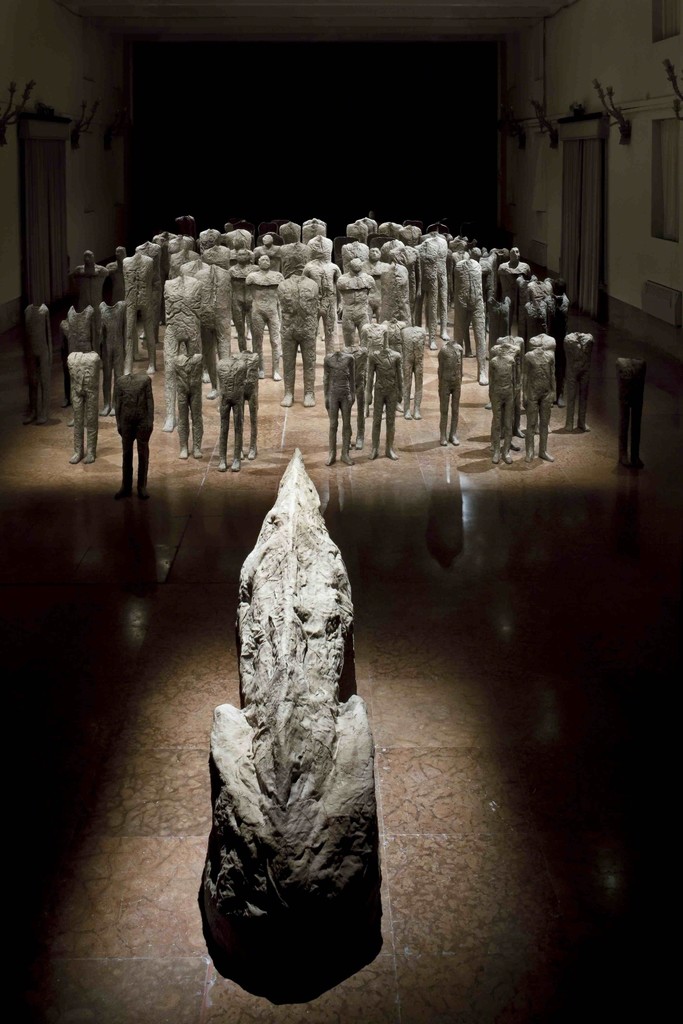 The 110 burlap sculptures are to be given their first showing on the Island of San Giorgio Maggiore, from 13 April to 2 August 2015. The installation has been realized by Beck & Eggeling (Düsseldorf) and Sigifredo di Canossa in collaboration with the Fondazione Giorgio Cini.

Magdalena Abakanowicz (Falenty, 1930) is leading a Polish artist, whose experimental approach to techniques and materials in a career of over forty years has revolutionised European sculpture. Staged on the Island of San Giorgio Maggiore by Beck & Eggeling International Fine Art (Düsseldorf) and Sigifredo di Canossa, in collaboration with the Fondazione Giorgio Cini, Magdalena Abakanowicz: Crowd and Individual, will be open to the public from 13 April to 2 August 2015. Consisting of 110 burlap figures, the large installation has been curated by Luca Massimo Barbero. This exhibition marks the return to Venice of the internationally renowned artist, who represented Poland at the 1980 Venice Biennale.

"I think that the impact of Magdalena Abakonwicz’s work”, says curator Luca Massimo Barbero, “arises from the way she conveys through a powerful sense of a crowd or group a human condition with an existential meaning in which often faceless people are bewildered bystanders, who find or lose themselves again. Her return to Venice with such a significant installation after the showings of her work at several Biennales may be seen as a homage to a pioneer who has left her mark in the field of experimental sculpture over the last few decades. The theatricality of this group of figures is achieved by placing the visitors and the work on the same level in a mingling of “crowds”, which also has the feel of an extraordinary, tragic human choreography; a game between two sides – humans and statues.”

An installation with a powerful emotional appeal, Crowd and Individual is the latest work in Magdalena Abakanowicz’s series on the theme of Crowds. At various times in her long career she has addressed this subject by experimenting with different materials, from fabric to metal, creating works that have become the most important part of her oeuvre. “Maybe the experience of the crowd, which waits passively in line, but is ready to trample, destroy, or adore on command, like a headless creature, has become the focus of my research. What may also have attracted me to the theme was my fascination with the scale of the human body, or a desire to determine how little is needed to express the whole.” This is how Magdalena Abakanowicz describes the inspiration for her interest in masses of individuals, a subject rooted in the harsh condition of being a woman and an artist in a politically unstable country like Poland, devastated by the Second World War and then overwhelmed by the Soviet-led revolution and forty-five long years of a Communist regime. It was a time when artists could not move freely and had difficulty in procuring materials for their work. During the Communist regime, despite already being acclaimed internationally, the sculptress continued to live in Warsaw and stand up against the propaganda and repression. She describes how “Many people moved from the country to cities in search of work and a better life. We were surrounded by a crowd that did not know how to organize their existence in a town, under new conditions. Money had no great meaning. The number of things one could purchase was limited by shortages and restrictions. We were standing in long lines to get whatever.” Hence here interest in crowds and the initial choice to use discarded materials, such as fabrics.

On entering the setting with the backdrops of the Sala Carnelutti in the Fondazione Cini on the Island of San Giorgio Maggiore, visitors are faced with a daunting crowd of 110 humanoid burlap figures, mostly headless, marching inexorably towards a single animal sculpture set opposite them (the so-called Mutant). The individuals are mainly textile busts, empty shells like tree trunks, portrayed in the act of walking. The individual sculptures have been meticulously made by the artist, one by one, all with their own identities and features, thus stressing that they are individuals before they become a group. “The kind of people I'm dealing with in my work are people in general” because “they speak of the human condition in general” and the perennial conflict between instinct and intellect. At the same time her work expresses the cruelty perpetrated by human beings on other human beings over the centuries. In a group individuals tend to lose their sense of responsibility and with it their dignity. “I wanted to confront man himself, with his solitude in multitude” – Abakanowicz explains further – “in my childhood I witnessed how masses worship on command and hate on command. Herodotus several centuries before Christ said that it is much easier for a leader to convince a crowd than an individual. Fascinated by quantity, I continued to cast human bodies in burlap, later in aluminium, bronze and iron. Headless, shell-like, often only with legs carrying the meaningful trunk, or with arms hanging like unnecessary tools, or with hands strong and aggressive. No face – it would eliminate all the mysteries of the body.”

The installation Crowd and Individual marks the return to Venice of the great Polish artist, who has held several shows at the Biennale during her career: Studio fatturale (1968); Crowd I – a 22-piece burlap installation that was part of “Identity and Alterity: a Brief History of the Human Body” in the Italian Pavilion (1995); Hand-like Trees, installed on the Riva degli Schiavoni (1997); and the particularly significant Embryology, when she was the national representative in the Polish Pavilion at the Giardini (1980).

Despite the difficult experience of living and working in Poland during the Communist regime, Magdalena Abakanowicz emerged as one of the most original and important figures on the contemporary sculpture scene. Her Crowds have been shown in various installations and configurations all around the world. The travelling Retrospective Exhibition in USA and Canada (1982) was staged in venues such as the Metropolitan Museum of Art, New York, the Museum of Contemporary Art, Chicago, the Museum of Fine Arts, Dallas, the Musée d'Art Contemporain, Montréal, and the Städel Museum in Frankfurt (1989). In 1991 a large retrospective exhibition was held in Japan, at the Sezon Museum of Art, Tokyo and the Museum of Contemporary Art, Hiroshima, while her stunning exhibition Hurma was shown at Chapelle Saint-Louis de la Salpêtrière, Paris. Many groups from the series are permanently displayed outdoors, as the result of commissions for works in which viewers can walk among bronze, stone or wood forms in locations ranging from the Raymond Nasher Sculpture Garden, Dallas, to the Millennium Park, Chicago and Poznan, or in major private collections such as the Foundation Margulies, Miami and the Giuliano Gori collection, Pistoia, Italy.