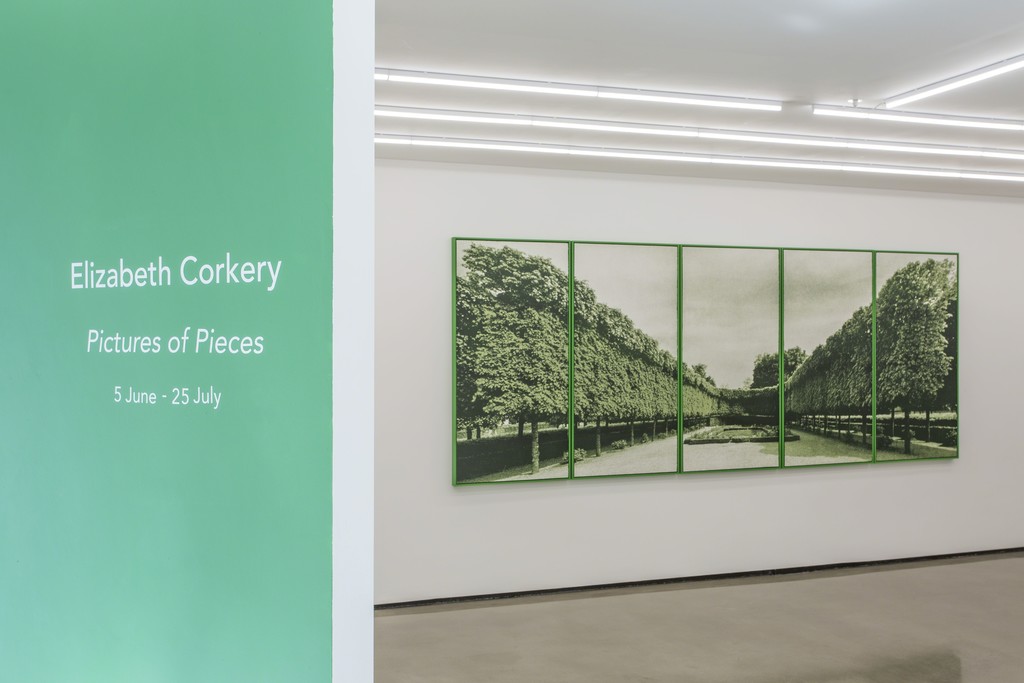 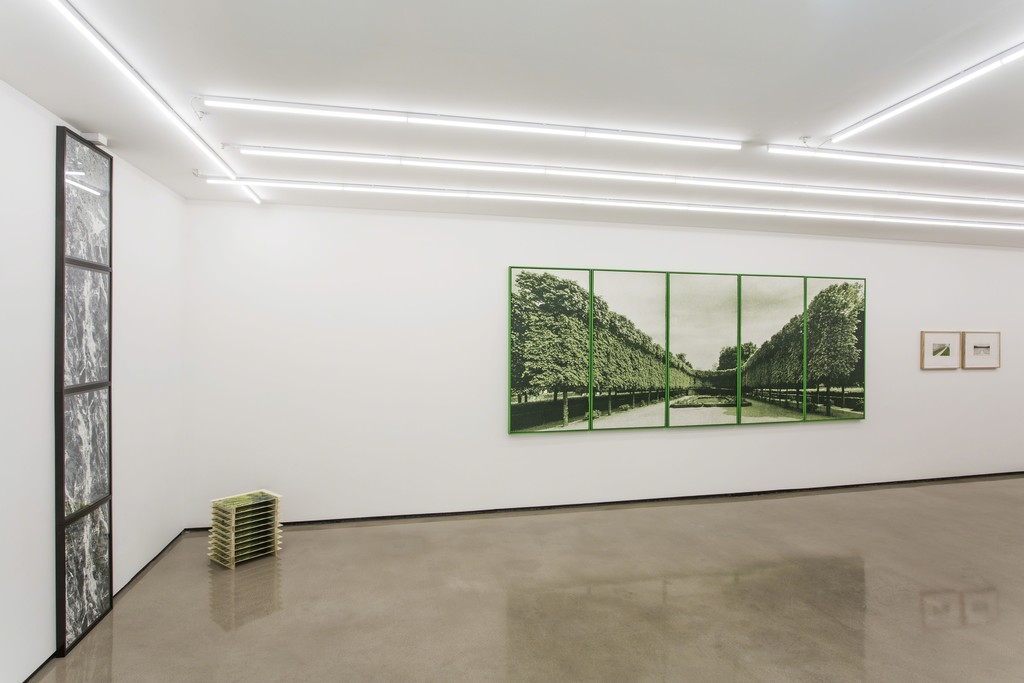 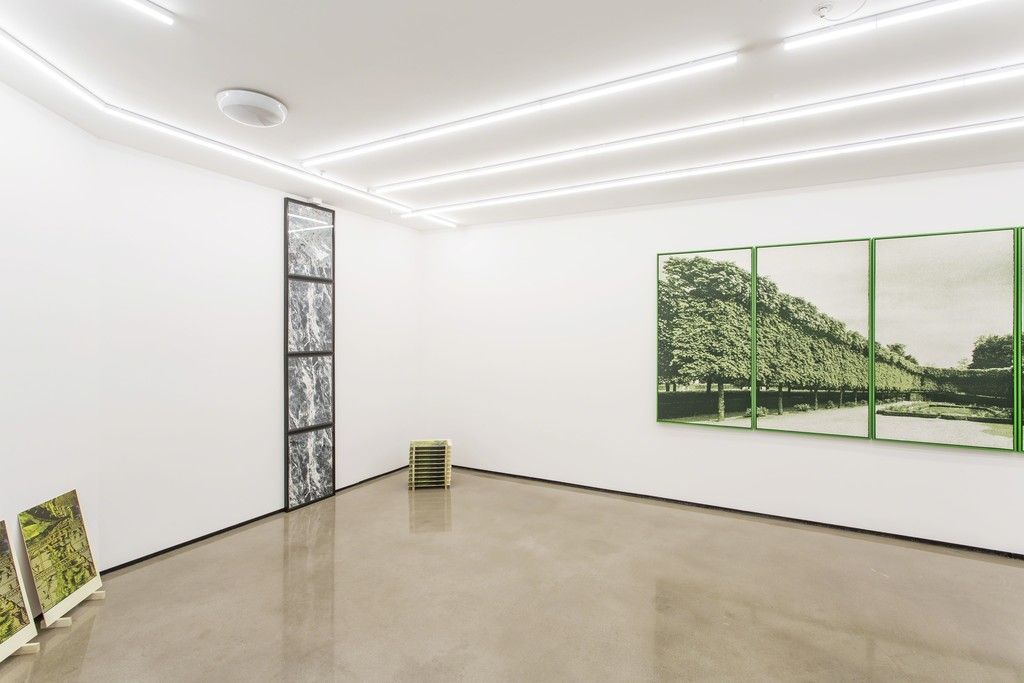 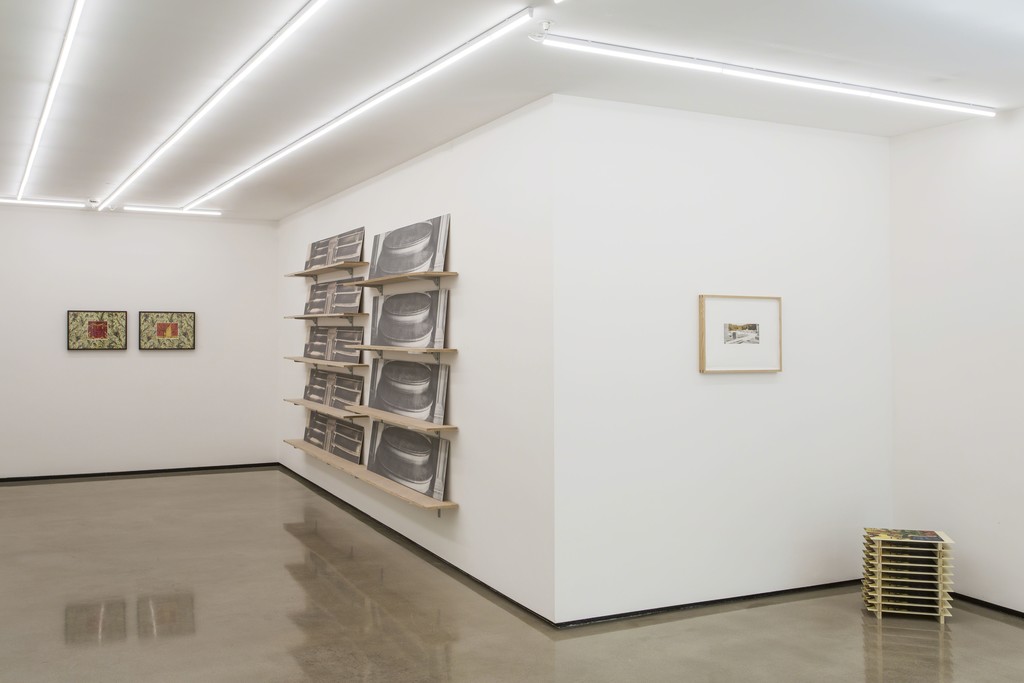 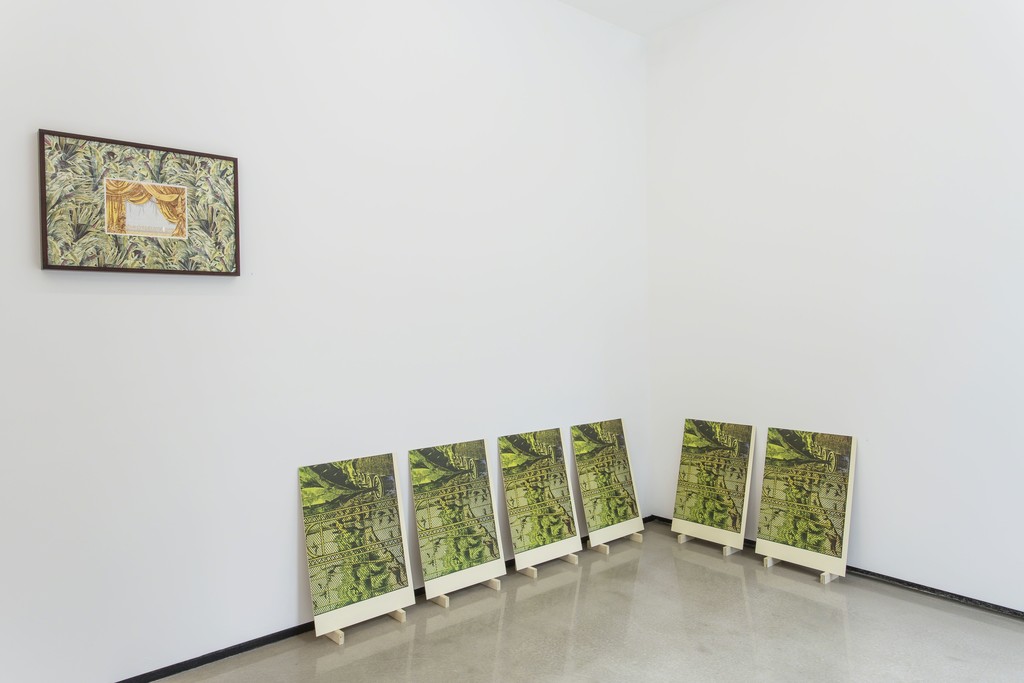 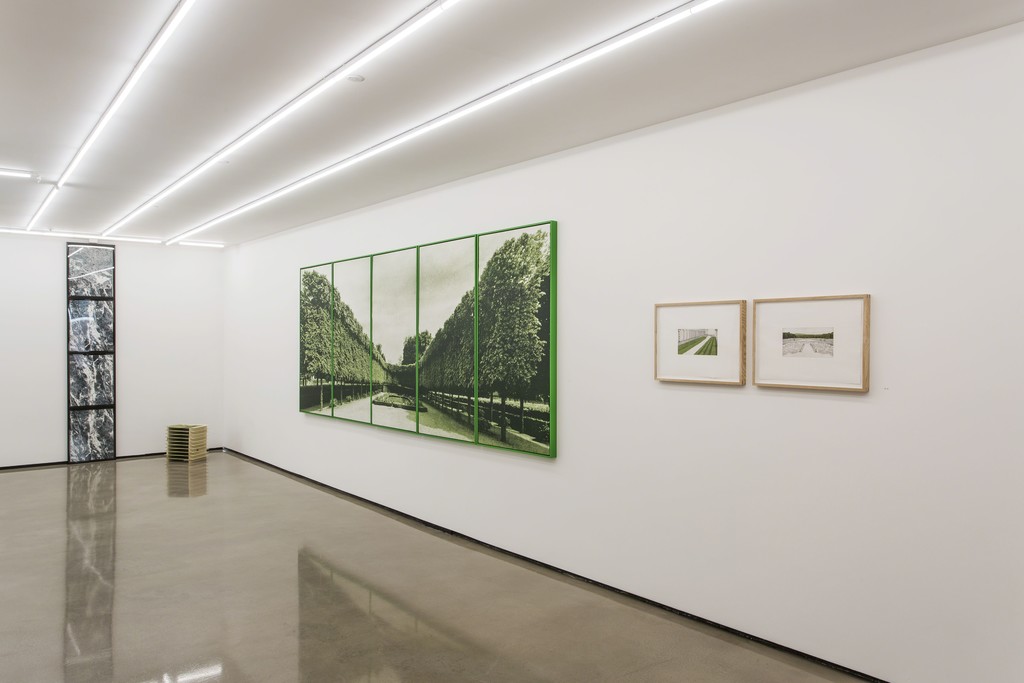 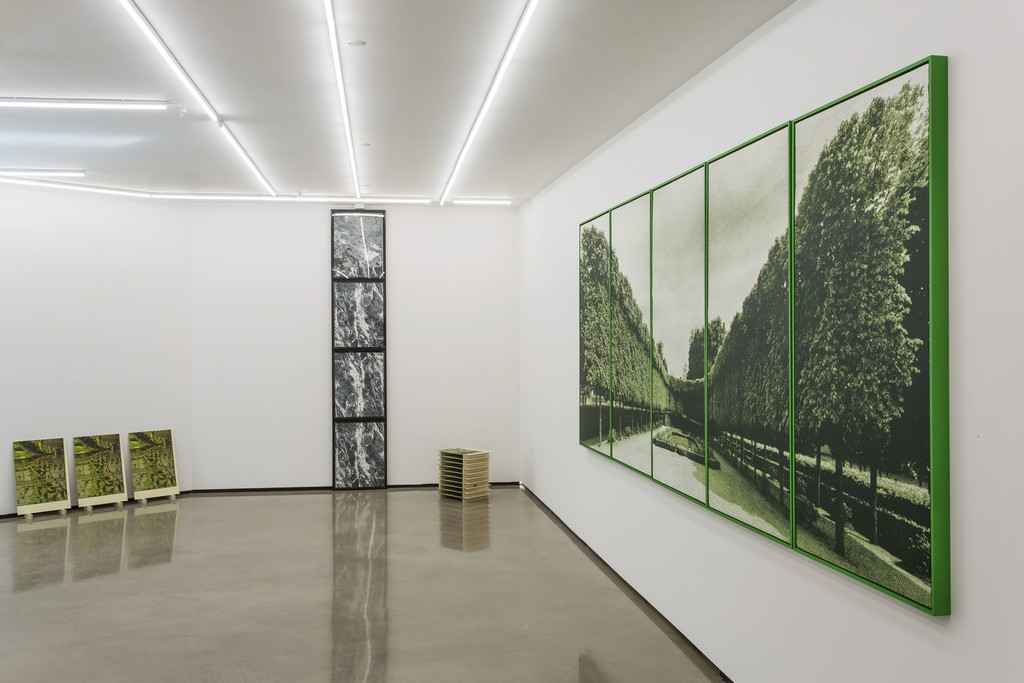 Elizabeth Corkery’s first solo exhibition with Beers addresses key concepts from the artist's practice, including ideas concerning the understanding of architectural space, the reproduced image, and the potentially fraught task of representing three dimensions in two dimensions. In a broad sense, Corkery's practice is one that can be broadly articulated as a continuous and considered mediation of pictures: reproduced pictures, generated from other pictures, or those suspended and separated from their original context.

Trained as a printmaker, much of Corkery's work concerns a language that arises through repetition, reproduction, and simulation of 'The Image'. Through a variety of spatial investigations, the work reconsiders the architectural environment as merely a static backdrop through which temporal activity takes place, as though the work operates as a site for the convergence of spatial and representational experience.The works largely employ the medium of silkscreen, either printed on paper or directly onto the rigid surface of thin MDF panels. Scale fluctuates as pieces assume the role of representation, structure or set in a careful negotiation between the display of pictures and pictorial illusion. Upon entering the gallery one is met with Pellerin Curtain (2014), a small gouache illustrating a closed theater curtain, indicating that action that has either recently concluded or is perhaps about to take place. This early reference to the stage is a pertinent one, as Elizabeth’s practice is one that often looks to expose its own production or mode of display, we are privy to the edge of the theatre set, but are also seduced by the potential for transportation. The larger pieces’ in this installation prompt a suspension of disbelief that enables the viewer to see both the picture and the object itself, pushing at the “extent (to which we) can retain our awareness of the means and see the representation at the same time?”[1]

Many pieces are either displayed as multiples or as multi-print series, Laurentian Repeat I and III consist of nine large-scale screenprinted panels that take their visual cue from photographic documentation of Michelangelo’s Laurentian Library. Sourced imagery of the staircase is cropped and screenprinted directly to thin MDF panels. Instead of presenting a pictorially convincing scene of receding space, the imagery’s flatness is heightened and the panels move up the wall in perfect repeat. Using the theatre and the garden (both quite cultured and cultivated areas of performance and ceremony) as an evocative and heavily laden site of inquiry, Elizabeth builds upon an almost playful, unassuming thematic foundation, as a structure to simultaneously look whilst physical exist within a staged, wholly fabricated context. Much of this lends to the historical studies around landscape architecture as a current field of research, while harkening back to historically imbued sites such as the gardens of Versailles, or even fantastical avenues of inquiry like the apocryphal and ancient Hanging Gardens of Babylon.

The large five-panel screenprint, Hedge Theater II, draws from similar pictorial investigations. They share a scale that establishes for the viewer a bodily context however as they approach a “life-size” scale there is a breaking down of the halftone printed reproduction. As the images enlarge to approach the scale necessary for pictorial illusion, the make-up of the image starts to give way and the corresponding and overlapped dots that make up the picture plane disperse and separate, resuming their role as regulated geometry. As one moves through the installation, smaller pieces jump cut to larger ones, pieces are either contained within frames or provide their own rigid structure; pieces march up the walls, lean or are stacked as if awaiting further action. The work reminds of contemporary sites like Berlin's Pergamom, in which entire ancient ruins have been reconstructed within a museum-space, pushing the boundary between history, reality, and simulacra into fantastical extremes. Now, engaging with film as a structural and temporal connector, Corkery frames the 'experience of existence' as the semiotic moments of incalculability: our recollected experiences within a particular space; personal memory triggers; those split-second cuts between cinematic shots.

Here, the viewer places himself within the framework, not unlike the famed and much-theorized Panopticon (the ill-fated 19th Century prison which posits the prison guard at the nucleus with an encirculating ring of cells ) Corkery suggests that this panoramic perspective allows the maximum potential for situating oneself amongst the action. Throughout her imagery and installations, Corkery has combined free-standing structural forms that engage with a physical and present experience, with printed, pictorial representations that connect to time past; a space that has previously been visited or traversed and whose spatiality is now limited to two dimensions where ultimately the viewer becomes the locus for memory, idea, and history.

Biography
ELIZABETH CORKERY (b. 1986, Sydney, Australia) received her MFA from Cornell University, Ithaca, NY in 2013 where she was the recipient of the John Hartell Graduate Award in recognition of excellence in graduate studio practice. She moved to the United States in 2004 after completing her BFA (Hons) in Printmaking from the College of Fine Arts, Sydney, spending two years living and working in Brooklyn, NY before commencing her graduate studies. Elizabeth has received production and research funding from The Elizabeth Greenshields Foundation, Brooklyn Arts Council, Somerville Arts Council, Cornell Council for the Arts and Australian philanthropic organizations The Dame Joan Sutherland Fund, The Ian Potter Cultural Trust and The Australia Council. In 2015 she will be a funded resident at the Vermont Studio Center and over the summer will work with the Fabric Workshop and Museum in Philadelphia. Elizabeth currently lives and works in Boston, MA.