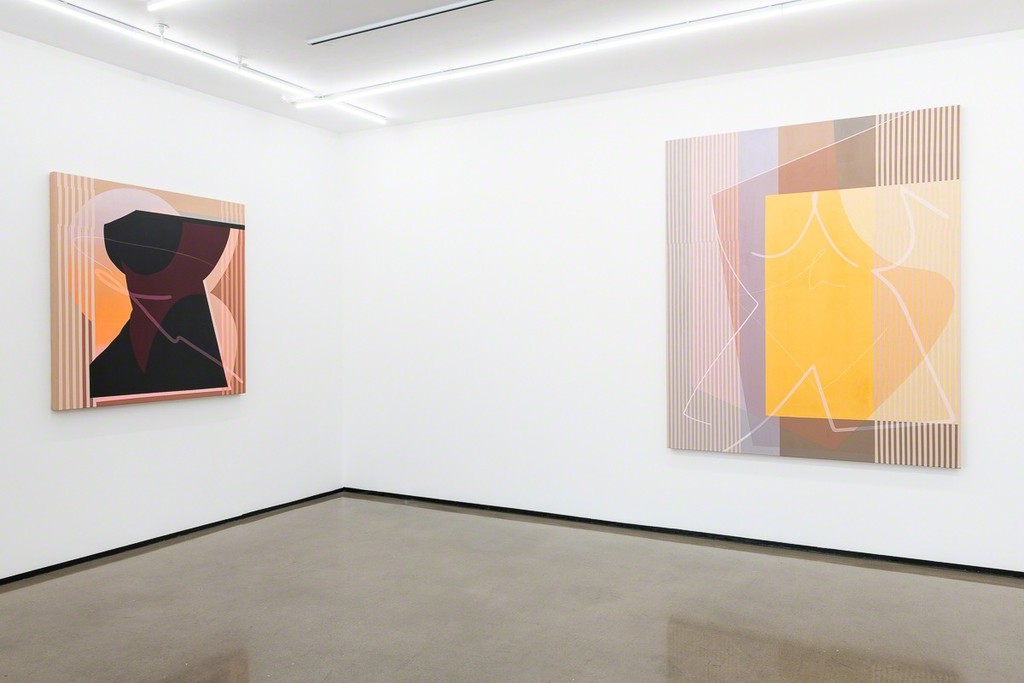 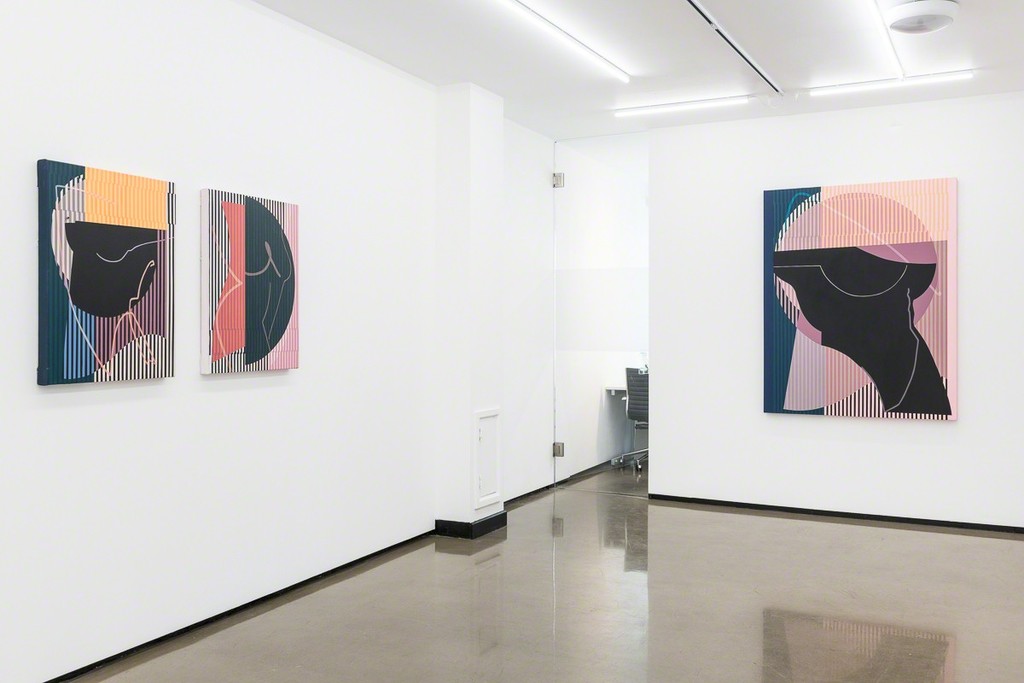 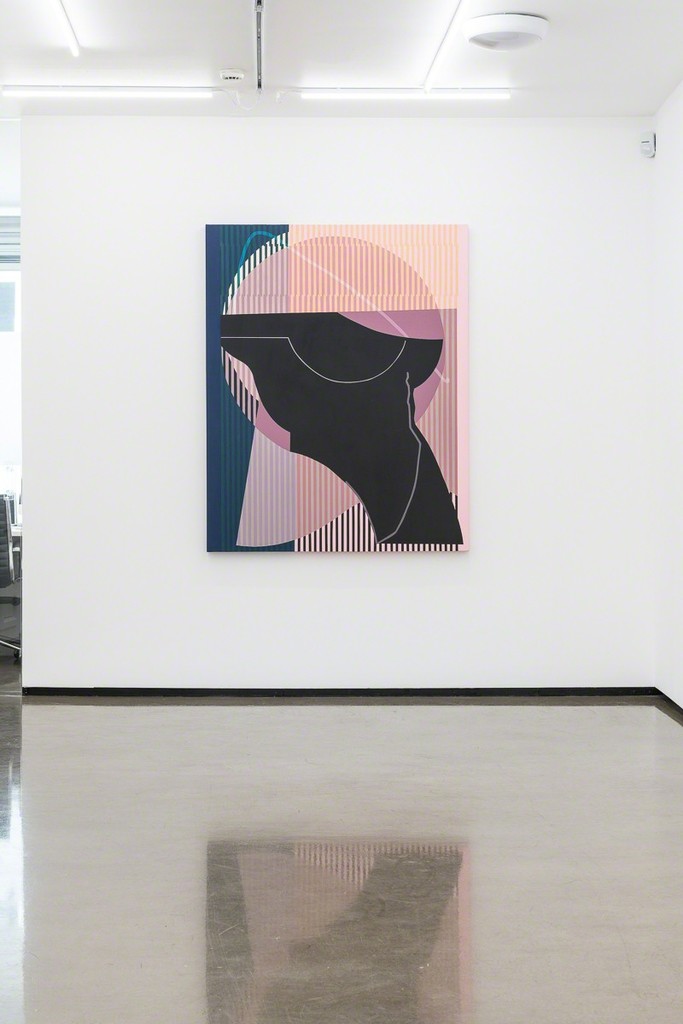 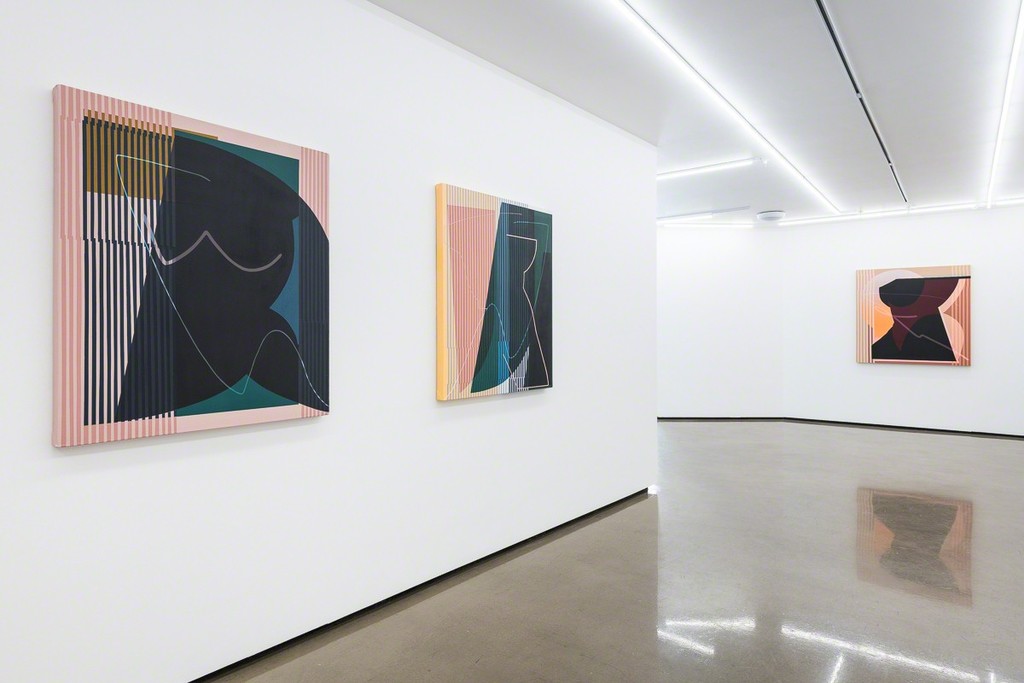 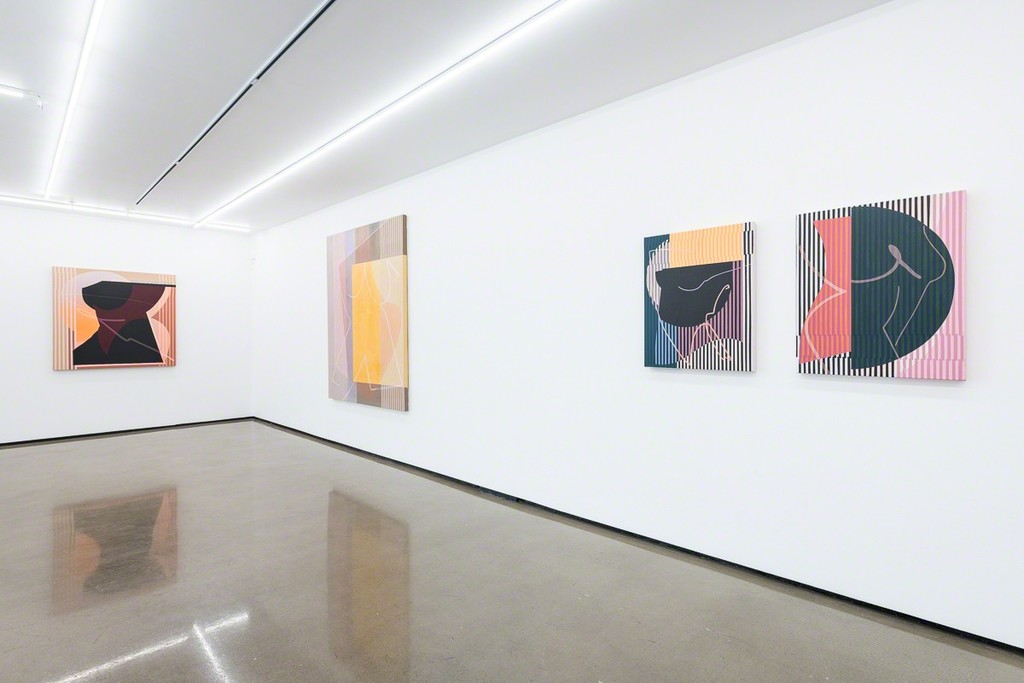 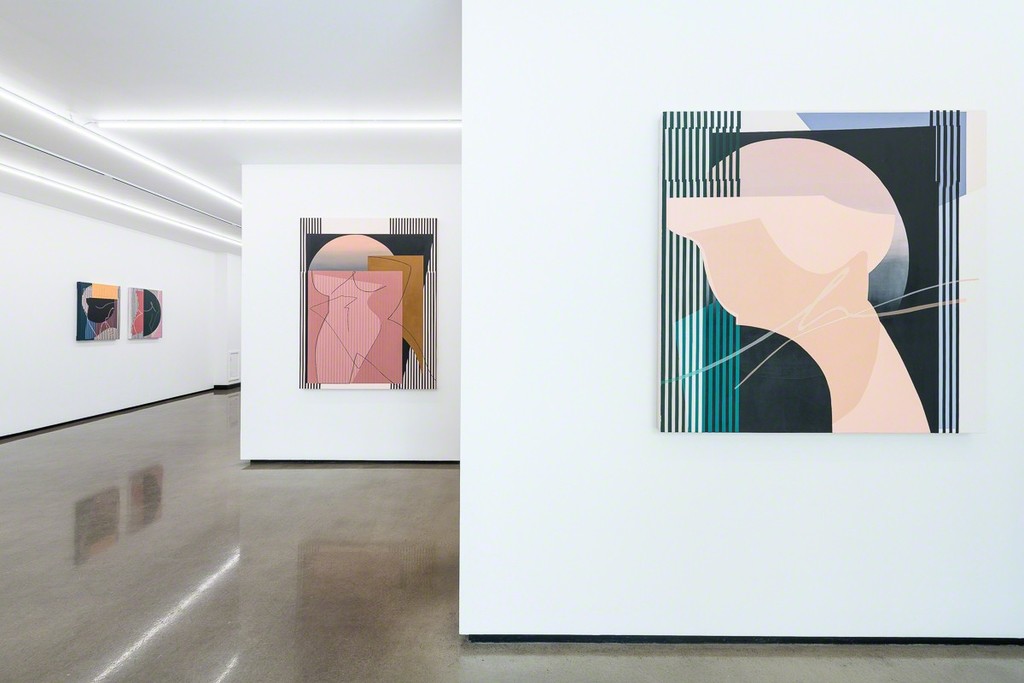 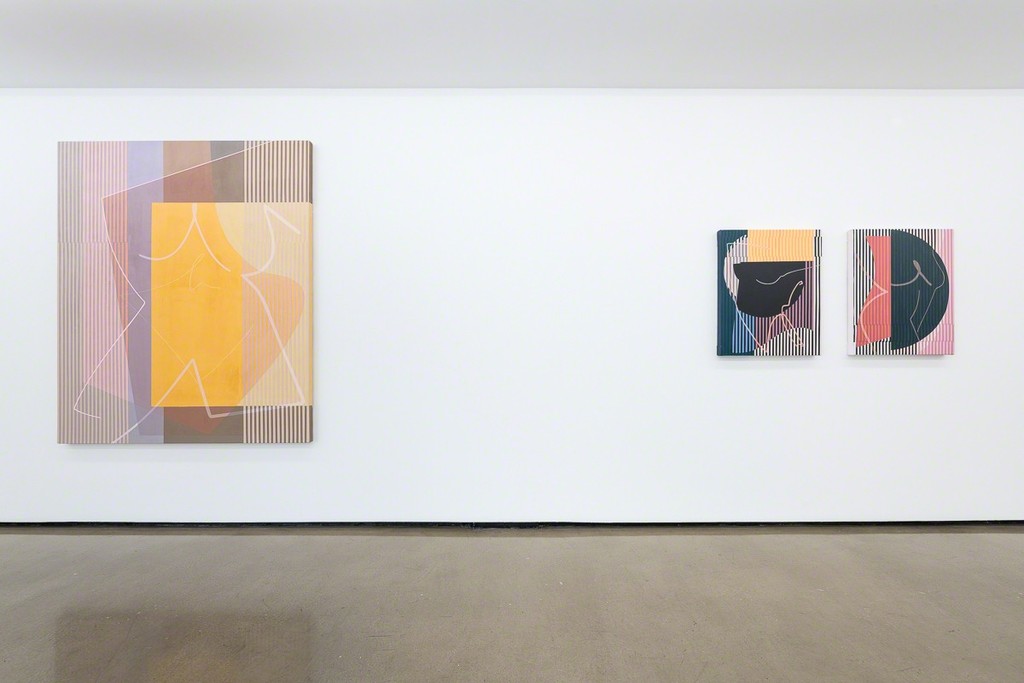 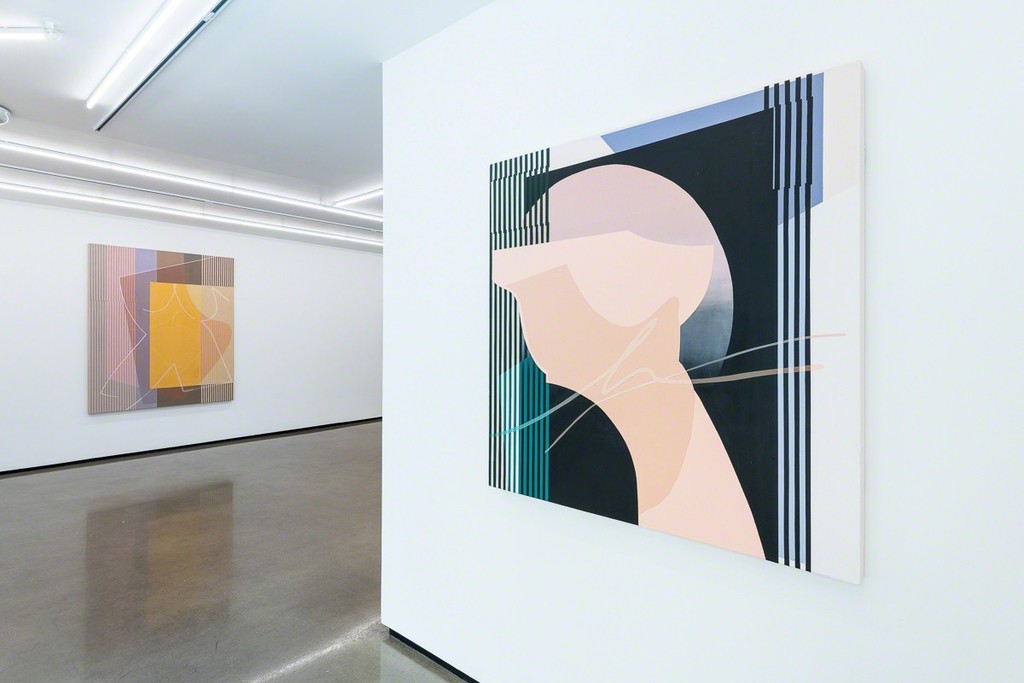 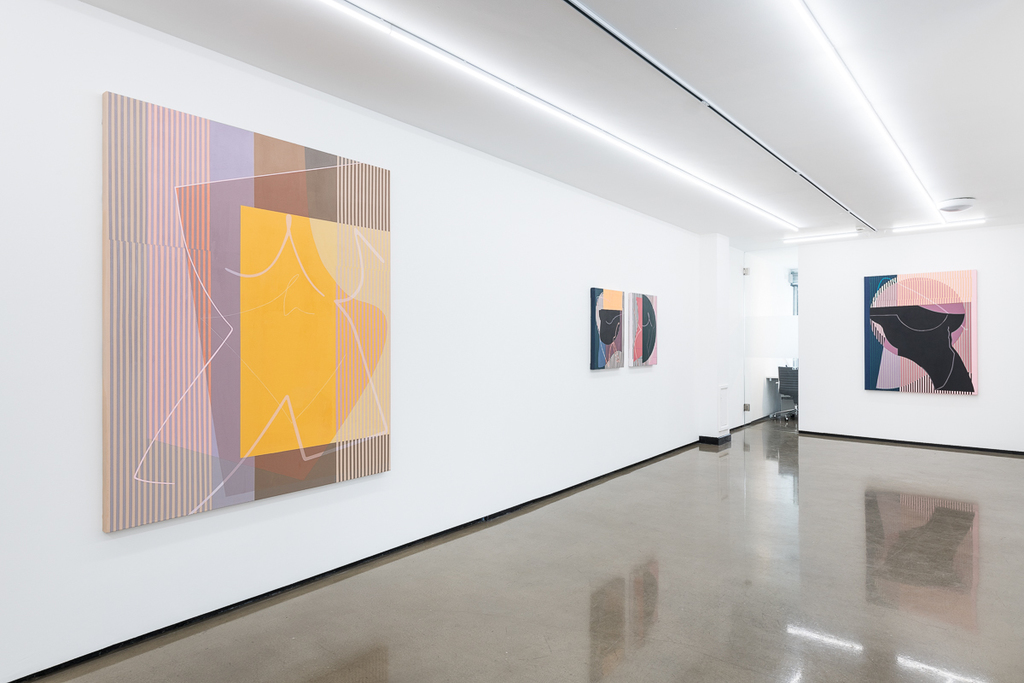 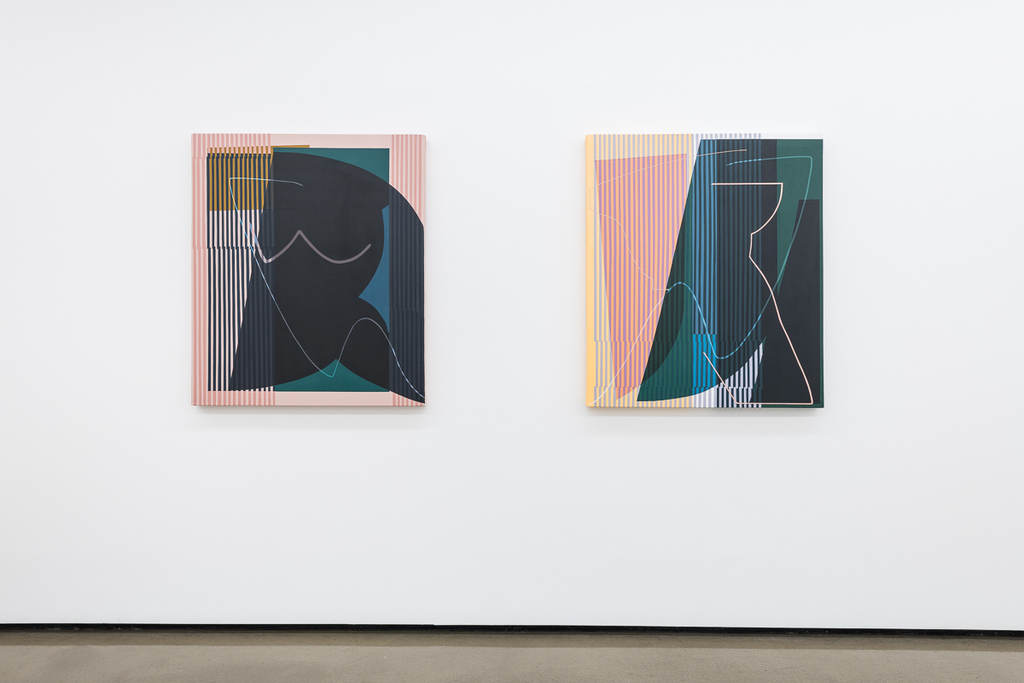 In her most recent body of work, the artist uses as her conceptual and pragmatic basis the act of creating a physical work of art from an initial digital rendering. Macnaughton uses her graphic design skills and incorporates it into her artistic process. Her graphic compositions are created on the computer, then projected onto canvas and meticulously followed with acrylic, creating crisp lines and boldly coloured shapes reminiscent of the hard-edge painting style popularised in the mid-20th century.

The main concerns of these compositions revolve around the employment of illusion, abstraction and optical effect. By experimenting with line and colour in particular, MacNaughton evokes the works of artists such as Josef Albers and Frank Stella, whose bold usage of simple line-work typify geometric abstraction. In a similar vein to these artists, the new works concentrate on how all these elements, in the words of Stella, ‘[force] illusionistic space out of painting’. She forms this space by creating the illusion of depth and transparency through shifts in colour. A shape in a dark hue, placed within another lighter shape, appears as if it inhabits a more distant plane; perhaps masked by an opaque form – the shadow of a backlit object.

Further inspiration is taken from Henri Matisse’s cutouts; MacNaughton often contrasts the strong, heavy forms that dominate her compositions with somewhat more delicate graphic shapes suggestive of the female form. When compared to her previous works that employed similar human forms, these shapes seem more expressive, less static. Of particular influence to this element is Matisse’s ‘The Dance’, wherein scarce lines evoke a sense of carefree movement. MacNaughton also creates an expression of motion through a combination of lines, gradients and the dancing figure. Lines inspired by Op Art, particularly that of the artist Victor Vasarely, create further movement; arrangements of concentric stripes result in a vibrating effect, showing the artist’s consideration of the physical affect that these shapes have on the eye. Figures, or the movement thereof, can also be seen through gestural line work that is interwoven into the shapes.

Canadian artist Kathryn MacNaughton deftly interweaves figurative painting with a combination of abstract expressionism, geometric abstraction, and even conventions of the painted still-life into one poetic statement. Here, these forms of figuration and still life have been flattened, like their more abstract counterparts, to face the frontal plane of the canvas. In this sense, the canvas - and the analog process of the painter's hand - references the computer screen and the digital touch, where these pieces originally begin to take their shape. She states: I wanted my digital work to look raw and handmade. Now that I create “physical” paintings, I want to give the illusion that the work is digital. MacNaughton, who trained and worked as a graphic designer, uses this sort of 'digital compression' to her advantage, and one begins to use typically post-analog language when discussing her work: masking, layering, colour-blocking, silhouette. Here these concepts are paired with more Romantic expressive movements: a scribble dances across a bust, outlined in silhouette, which guides the viewer's eye around the flattened curves as one guides the finger across a map. The work simultaneously houses a sensuality one aligns with gender tropes: as suggestions of feminine curves play shadow-tricks, appearing as vessels or curtains that guide the eye, but also obscure and reveal the picture plane while painterly splatters and curves leap behind and before the picture plane. But also the masculine, referencing brutalist and Modernist architecture: the austerity and monolithic qualities of shape, form, and line, or perhaps even the sharp angles of cacti in the desert. We see references from Robert Morris to Georgia O'Keefe; Diebenkorn to DiChirico, and even a cheeky reference to the highly stylized drawings of Patrick Nagel (more colloquially known as the artist who made Playboy 'drawings' iconic of the entire 1980s). The work therefore works in polarities: analog and post-analog mark-making (ie: the painterly and the digital); feminine and masculine; pragmatism and Romanticism; expressiveness and obfuscation; light and dark. There is a sense of theatricality to her revelations, and it is, in every sense, a cheeky play of light and dark versus form and technique, like boxing with one's own shadow - an art of individual, delicate mastery.