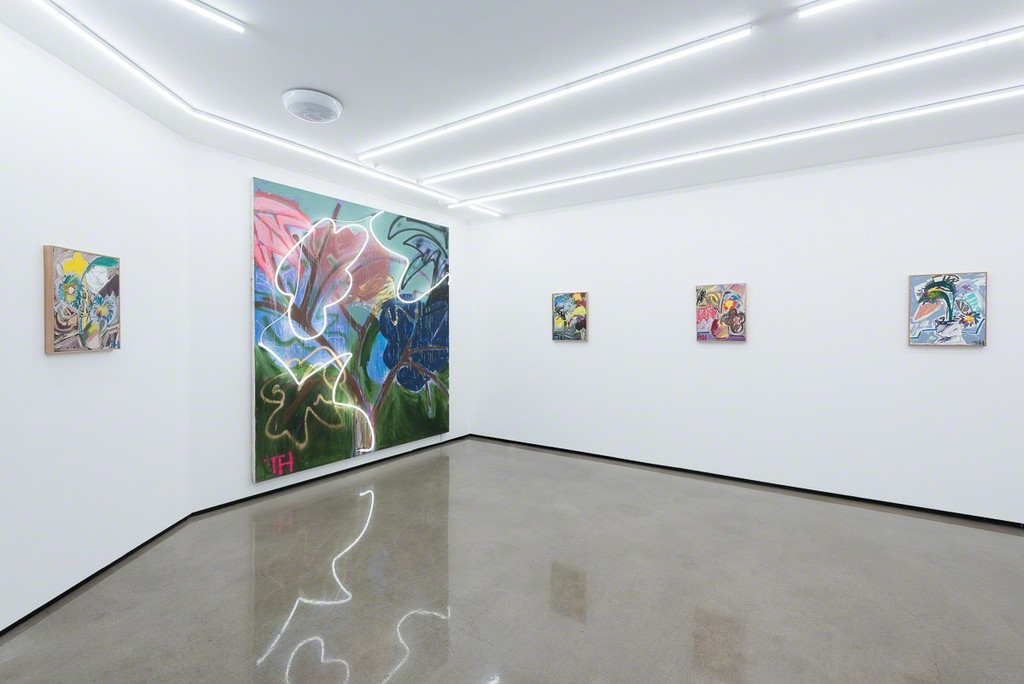 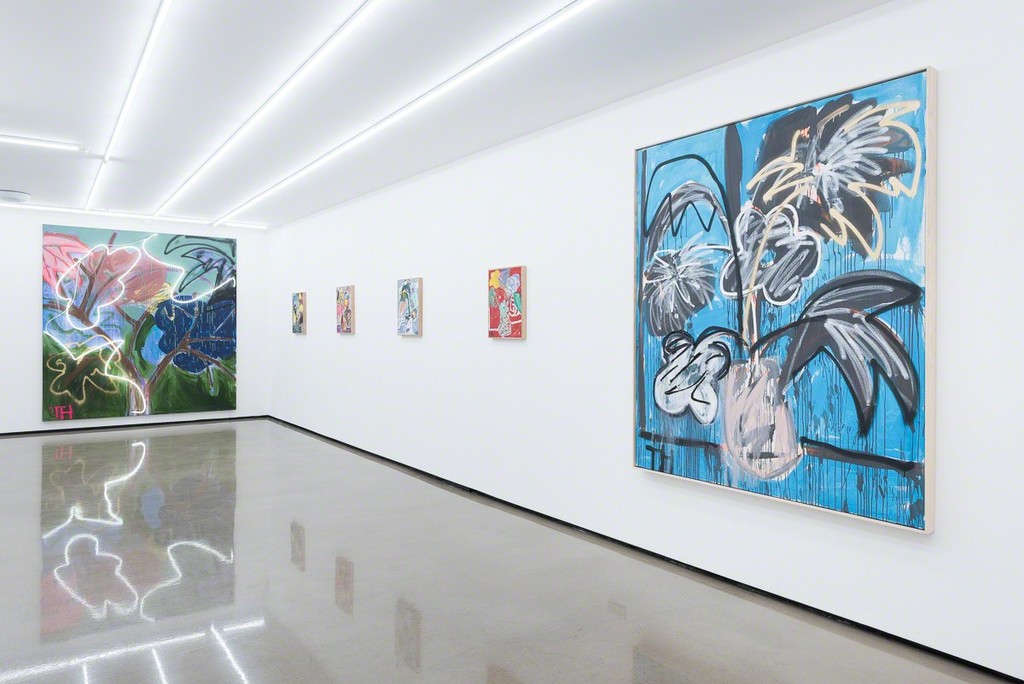 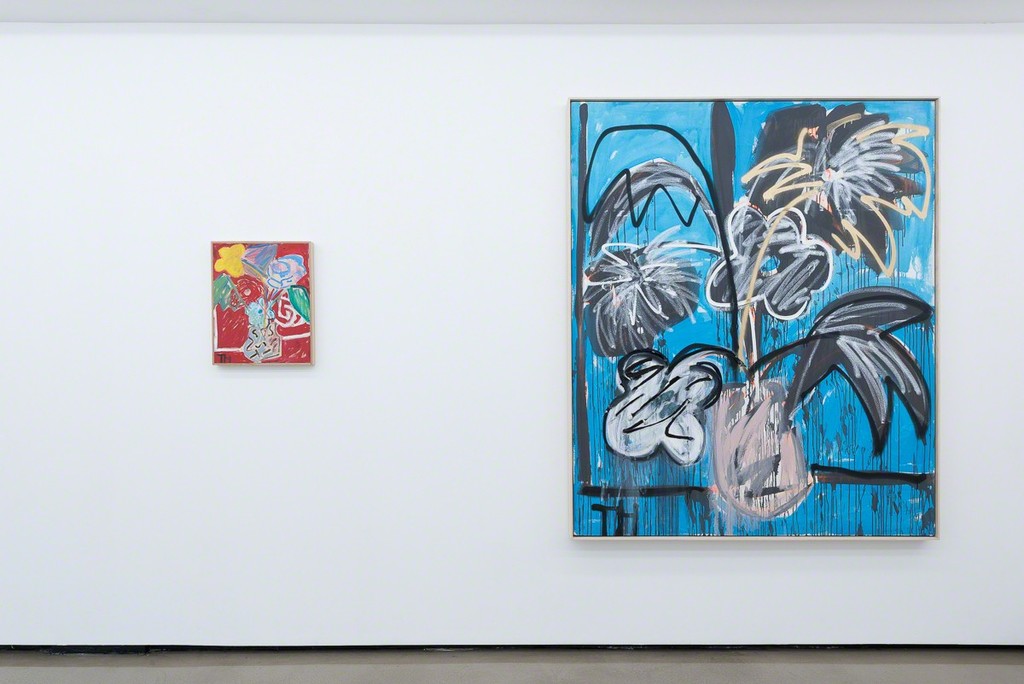 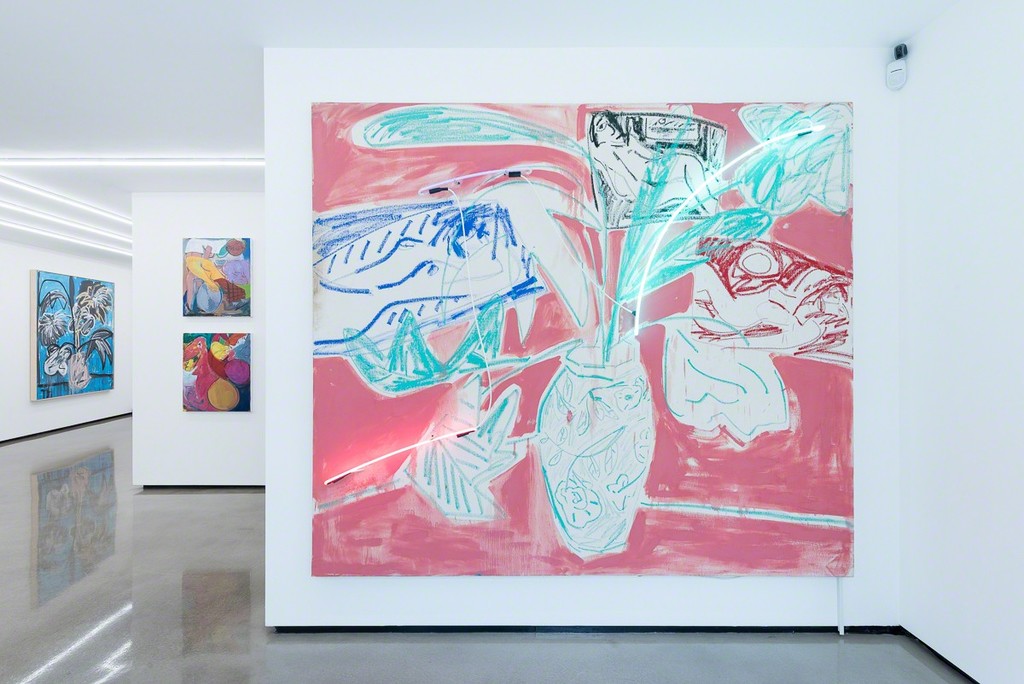 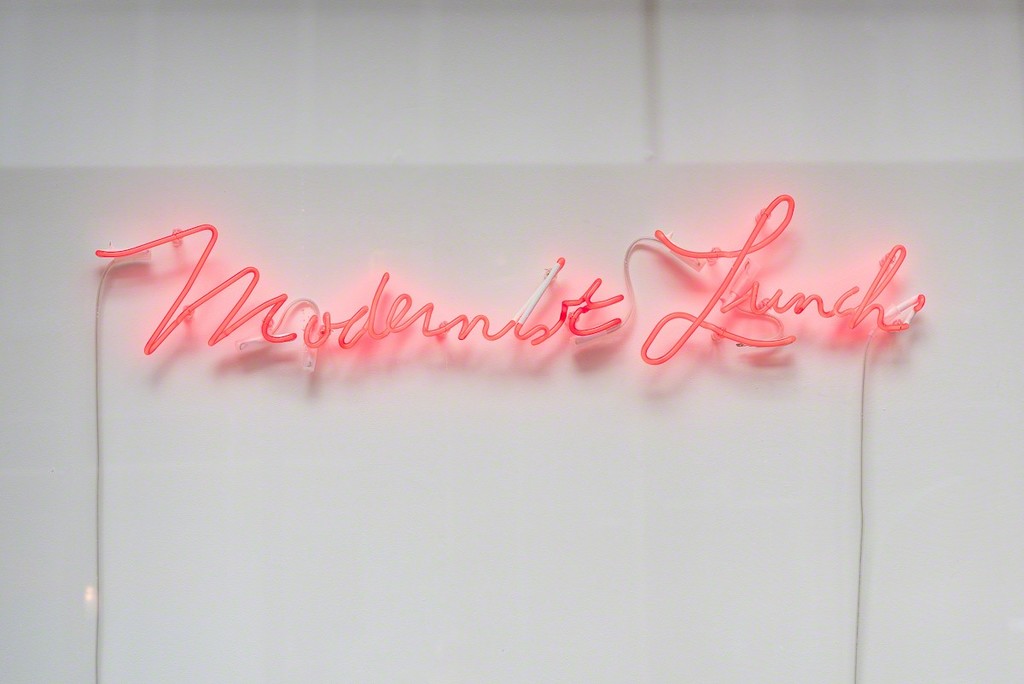 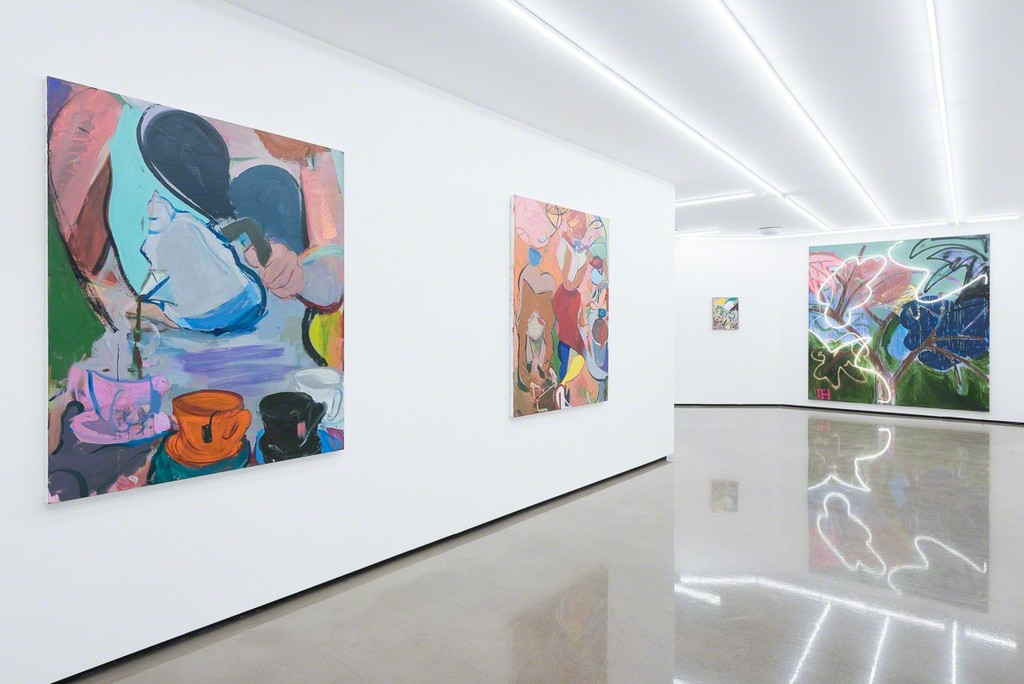 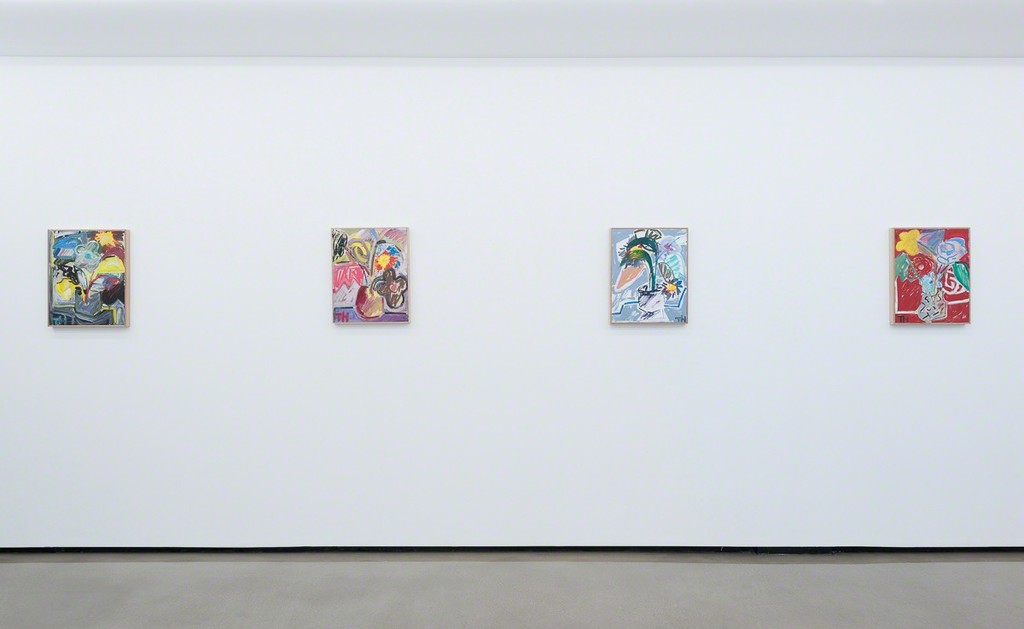 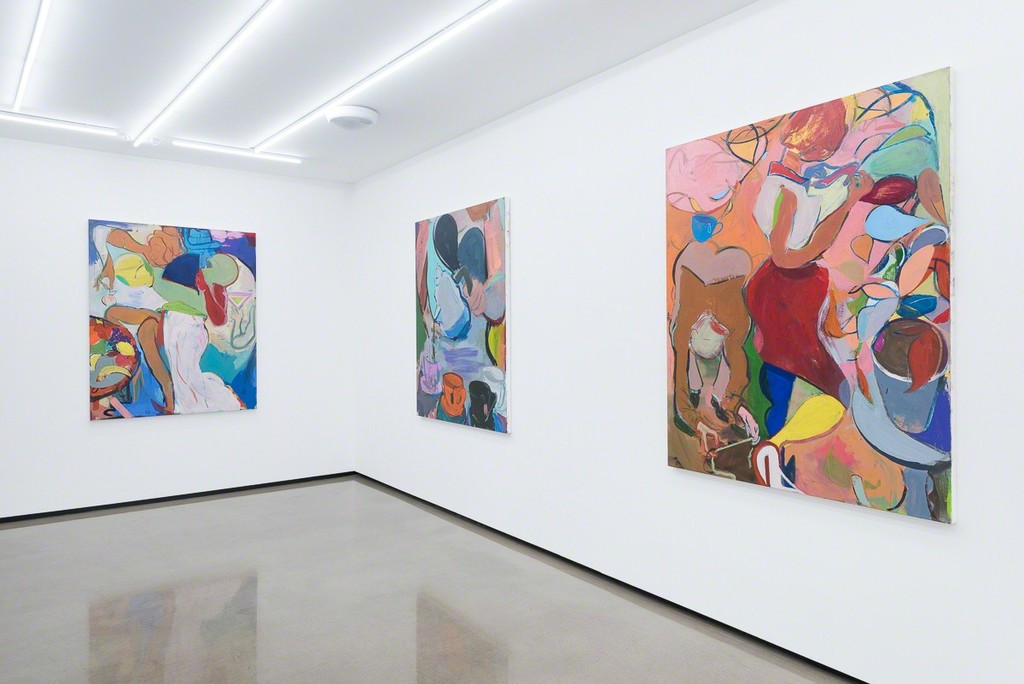 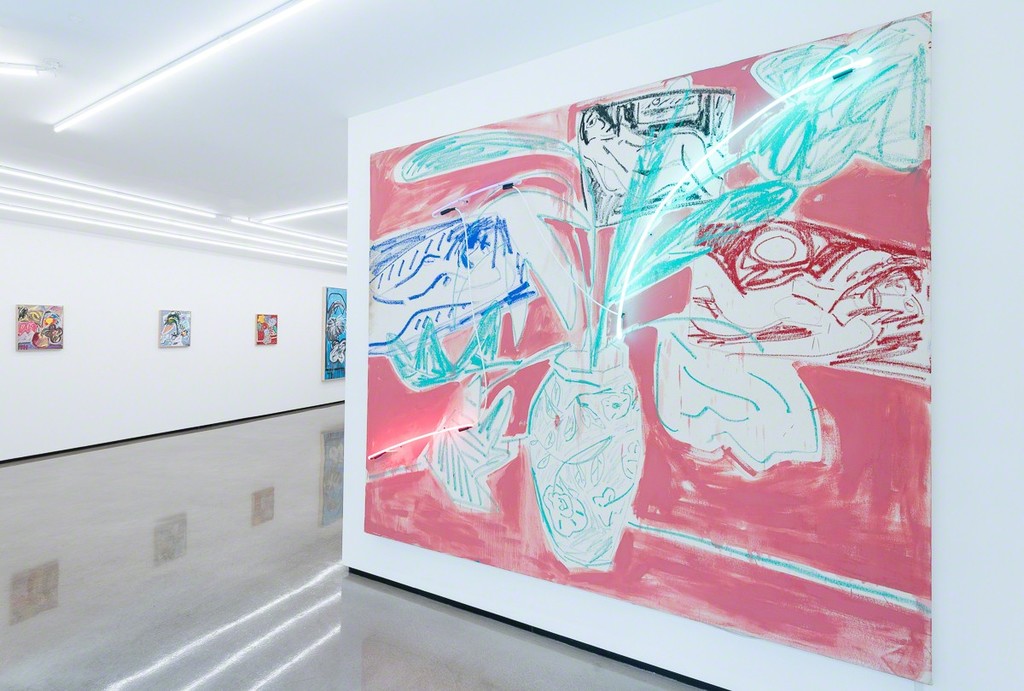 There is an ironic undertone to the type of nostalgia explored through the works of both Thrush Holmes and Jonathan Lux. Both artists operate a brightly-coloured, often humorous and revisionist approach to Modernism. With Holmes, the conventions of the still-life upended and spun on its head; Lux explores a stylistic tradition imbued by narrative. For both, familiar themes are explored in unfamiliar methods: Holmes’ work is irreverently playful, at present, the young Canadian artist reconsiders the traditions of floral painting, drawing upon obvious inspirations like Picasso and Matisse. The loud, unforgiving but ultimately sweet Fantasy Painting most evidently recalls Picasso’s famed 1907 painting Demoiselles d’Avignon in both its fleshy colour-scheme and casually splayed nudes on offer for the viewer. For Picasso, they were prostitutes at a brothel; and here Holmes seems to paraphrase Picasso: his offering almost paraphrasing Picasso, suggesting a nude painting here, a large plant, a intensely decorated ceramic vase, a splash of Modernist light here reimagined as a fluorescent bulb. Like Picasso, Holmes is interested in breaking down forms and exploring ideas. He is paying homage to, while simultaneously subverting, these canonised traditions of Modernist subject matter and technique. As though presenting a singular, bold idea: and so on and so forth. The neon asks us to further consider our relationship to tradition: is the application of neon arbitrary? And can painting be simultaneously silly and well-executed? (The answer of course is yes: from Gary Hume’s recent ‘deconstructed rainbow’ works at White Cube or even George Condo’s ongoing oeuvre of maniacally laughing portraits that poke-fun at traditions of painting and portraiture).

The work of Lux, however, focuses on creating a greater narrative to envelop his body of work. Holmes priorities instant gratification - whereas Lux invites (and hold) your interest, asking you to explore the works at length. As we see his characters and stylistic tendencies we can begin to unravel whatever ongoing meta-narrative he creates. There are nods to Alice in Wonderland, and everything from his subject matter to his paint handling somehow seems like a storybook gone awry. Throughout, the works feature dancing tea-pots, dollops of whipped-cream, anthropomorphised (and smiling!) objects, and more… one painting even exhibits a clinic for edamame beans. Unlike Holmes, who desires and exploits ideas of immediate gratification, Lux is concerned with the ongoings of a world of his creation. Through their suggestion of 1950’s style animation (vintage Coca-Cola or movie theatre adverts) that have somehow been reiterated as sensuous, almost grotesque. But they situate themselves squarely in the current contemporary language of painting: essayist Rose McLaren who wrote for his 2015 show at Marlborough Fine Art likens him to Ryan Mosley or Sigmar Polke, but the similarities do not cease there. He is a ‘painter’s painter’ - a label he clearly deserves as someone with a strong, clear, perspective and the nerve and confidence to pull it all off with such effortlessness.

So while an argument could be made that Holmes prioritises the concept and idea of painting, Lux makes it all about the paintings themselves. Holmes takes a critical distance, offering semiological clues to consider how we learn to understand, critique, and decode a history of painterly images. While Lux talks about these ideas tangentially, a type of codified language of painting all explored within the artworks themselves, layered and stacked, suggestions of figures, shapes, fruits, and foodstuffs peeking through layers of paint. In Holy Mountain, an anonymous host pours tea for the viewer, and Holmes’ floral paintings could be set as the centrepiece. It seems like it is going to be a wild and wonderful lunch, indeed.