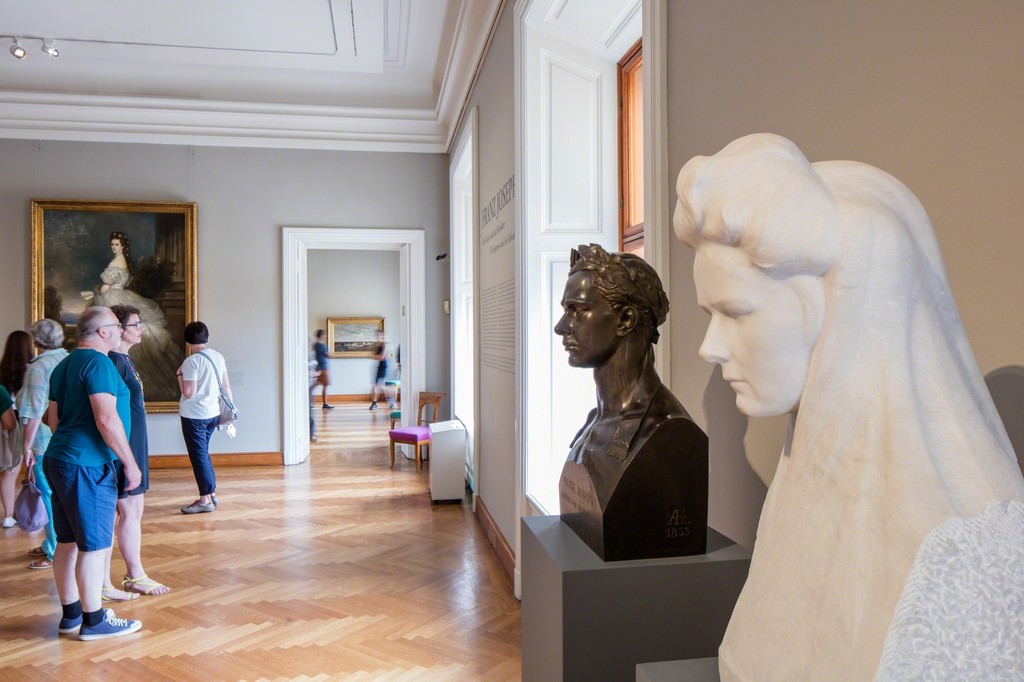 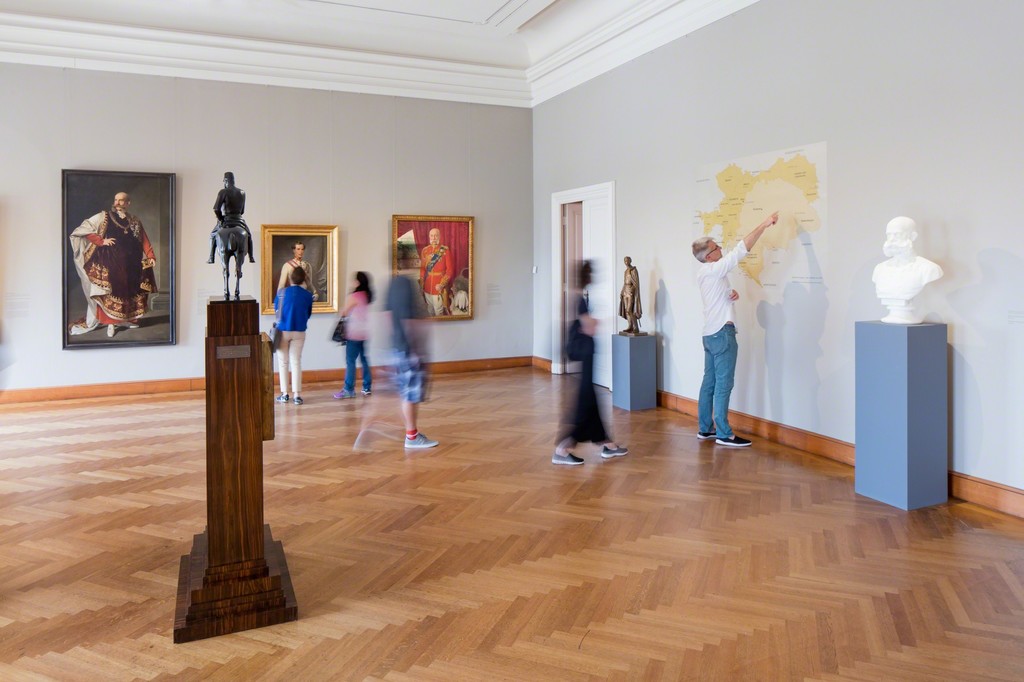 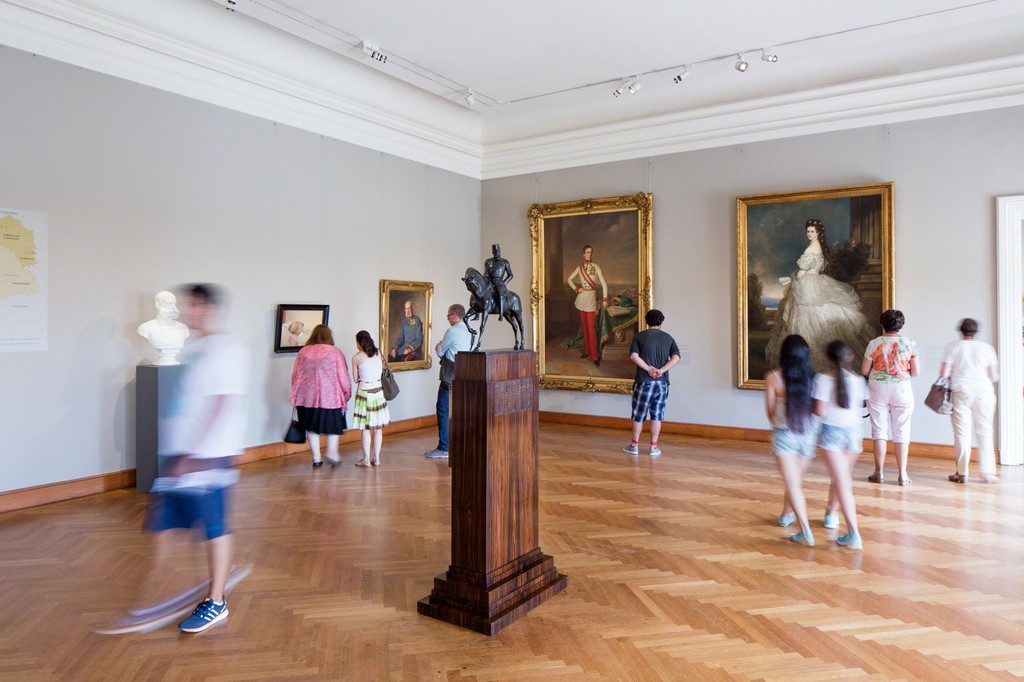 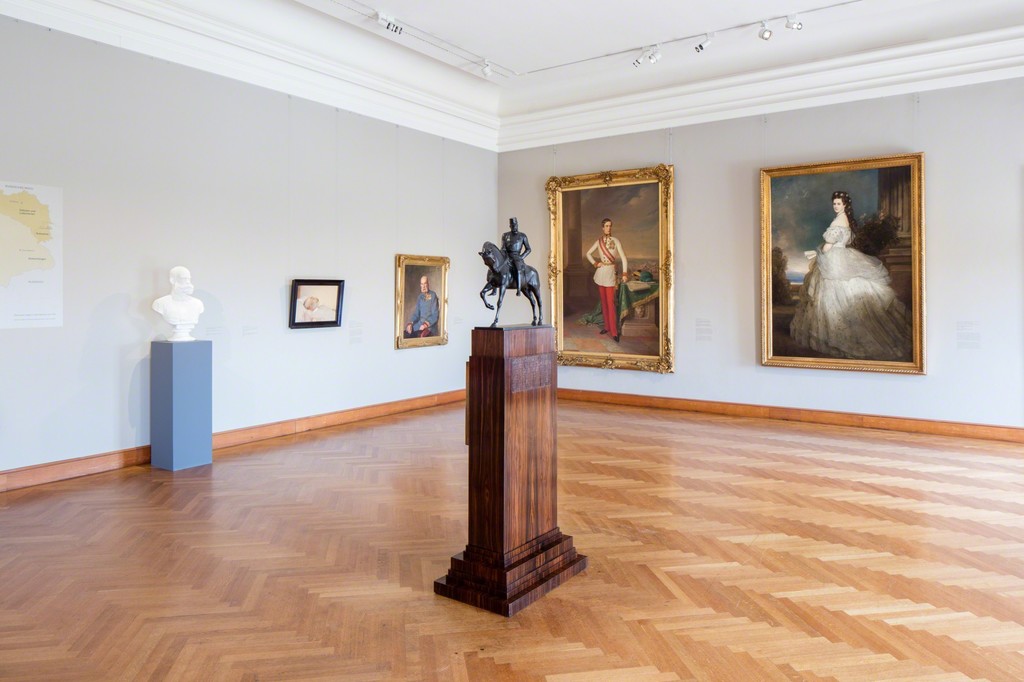 With its temporary exhibition on Francis Joseph I, the Belvedere honours an emperor whose unusually long reign was marked by a number of profound political, cultural, and artistic changes. On the occasion of the 100th anniversary of Francis Joseph’s death, the Belvedere is presenting a selection of portraits of the emperor and his wife, Empress Elizabeth, from its own holdings in a separate room on the 2nd floor of the Upper Belvedere. All of the works acquired during Francis Joseph’s government by the art administration of the state are specially labelled in the Belvedere’s regular exhibition rooms.

Born in 1830, the year of the Paris July Revolution, the first major political upheaval in Europe after the Congress of Vienna, and grown up and shaped by the Metternich Era, Franz Joseph ascended the imperial throne of Austria in the year of the Revolutions of 1848. Having just come of age, yet well-prepared for his reign by his mother, Archduchess Sophie, ever since his childhood, Franz Joseph would rule for almost 68 years, until his death in November 1916 – longer than Queen Victoria and any Habsburg sovereign before him.

Franz Joseph’s government was ill-fated. The emperor was forced to put up with both the loss of Austrian territory in Italy and Prussian Germany’s rise to a Great Power position in Europe. Under the growing pressure of conflicts among the nationalities of his multi-ethnic empire, he managed to reach a compromise with Hungary in 1867, albeit at the disadvantage of other ethnic groups. The absolutist Austrian Empire, governed centrally from Vienna, became the constitutional Dual Monarchy of Austria-Hungary. This political act, however, did not prove beneficial in halting the Habsburg Empire’s collapse. Additionally marked by personal blows of fate – the suicide of Crown Prince Rudolf in Mayerling in 1869 and the assassination of Empress Elisabeth in Geneva in 1898 – Franz Joseph’s government ended up in the catastrophe of the First World War. Farsighted contemporaries interpreted the emperor’s death in November 1916 as a sign of the ultimate downfall und demise of the Habsburg monarchy two years later.

There exist innumerable portraits of this ‘“centennial” emperor, as Franz Joseph may rightly dubbed,’ says Agnes Husslein-Arco, Director of the Belvedere, “for his long life and reign do not only reflect a century of Austrian political history, but also a century of art evolution in Austria.’ Born in the Biedermeier era and raised during the lifetime of Ferdinand Georg Waldmüller, Franz Joseph witnessed the splendour of the Makart period, the foundation of the Vienna Secession, and the beginnings of Modernism in Austria. The emperor’s likenesses, a selection of which from its own holdings the Belvedere is presenting on the 100th anniversary of his death, are not least a mirror of these artistic developments. The show also includes portraits of Empress Elisabeth, called Sisi, without whom Franz Joseph and his epoch would be unthinkable. Only on rare occasions did the emperor and empress pose for painters, sculptors, and, later on, also for photographers. Therefore many artists had to make do with always the same pictorial models, most of which had long become obsolete, as sources of reference. This played a marginal role in the case of the emperor, who was mostly depicted as a sovereign in uniform. However, with Elisabeth, whose beauty was praised throughout Europe, the matter was different. In the end she was unable to cope with the role of Empress of Austria that had been imposed on her. She escaped from her life at the Viennese court through increasingly extensive travels and finally also shied away from presenting herself to the public eye, hiding her face behind a veil and additionally protecting her features behind a fan and parasol. It was practically impossible to get hold of her portrait.

‘And then there was the couple’s growing estrangement, which is not least reflected by the portraits,’ says Rolf Johannsen, the exhibition’s curator. Anton Einsle’s impressive portrait of the emperor and Franz Xaver Winterhalter’s famous portrait of Elisabeth, in which she wears diamond stars in her hair, show a couple in harmony, aware of their rank and social standing. In later portrayals, this changed, as is recognizable in Anton Romako’s portraits of Empress Elisabeth with a Saint Bernard and of Franz Joseph with the regalia of the Order of the Golden Fleece. Ten years later, in Tom von Dreger’s portrait of 1913, the emperor, adorned with his magnificent decorations, is depicted standing lonely against the backdrop of the lively gardens of Schönbrunn, with the Gloriette in the distance.

Compared to hunting, Francis Joseph was not particularly vehemently interested in the arts. During his government, a state-run art administration department was established that purchased works of art for public collections and whose acquisitions now number among the Belvedere’s core holdings. They include, among other works, Franz Xaver Messerschmidt’s Character Heads and Gustav Klimt’s Kiss, which was bought in 1908 for the Modern Gallery, the institution preceding the Belvedere. Some eighty of these works are now on view in the permanent collection at the Upper Belvedere. For the duration of the current exhibition, those works acquired during Franz Joseph’s reign will be marked with a yellow sticker bearing the emperor’s initials. Visitors are thus invited to perceive the collection in a new light.