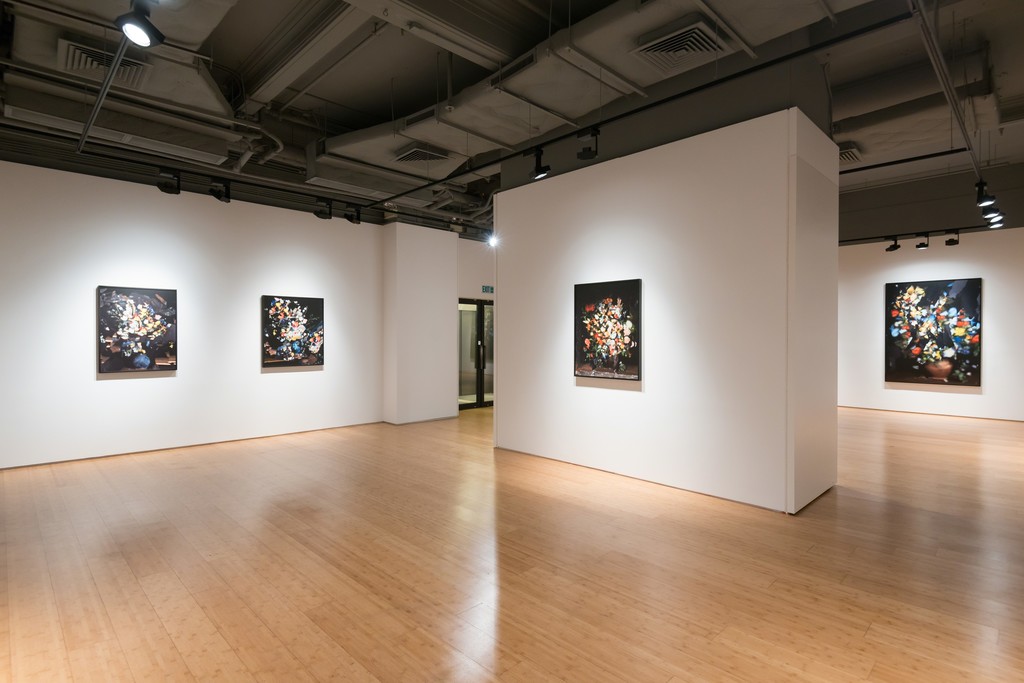 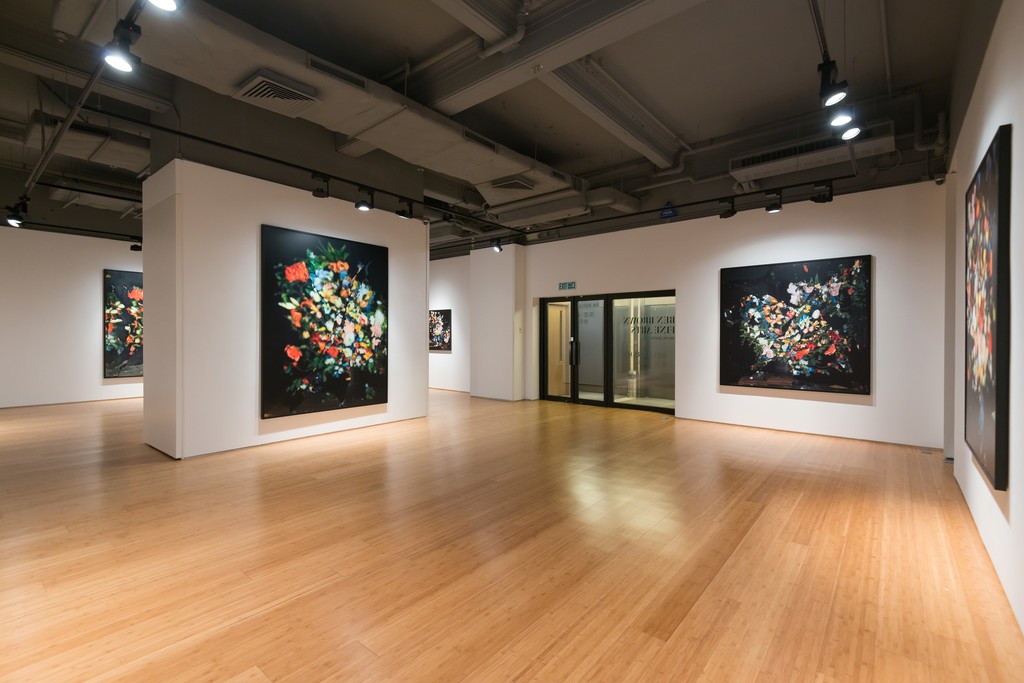 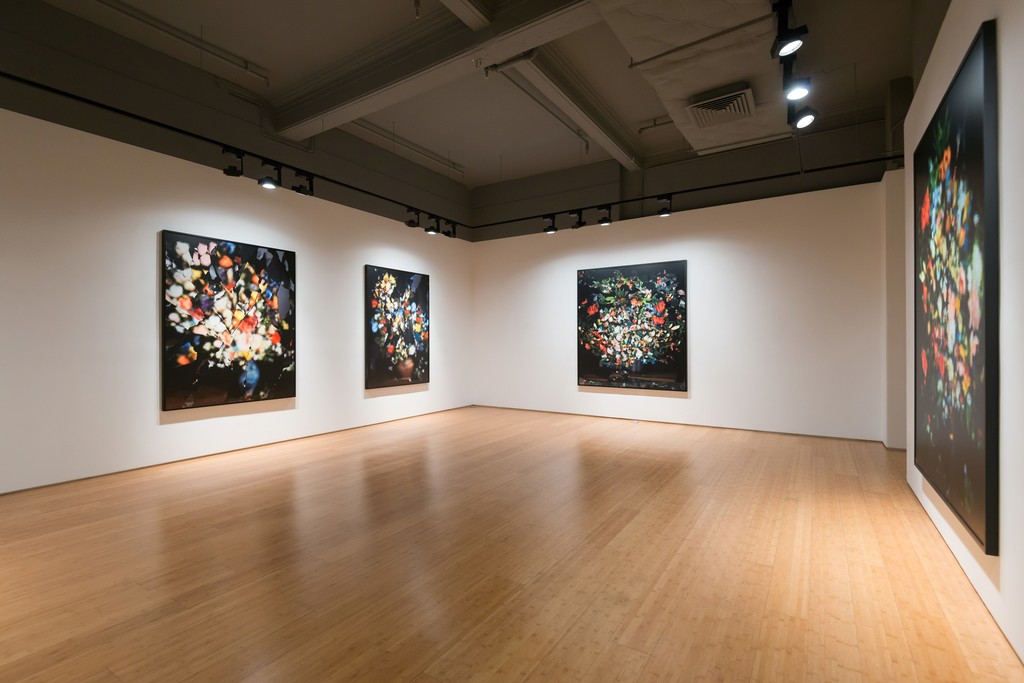 Ben Brown Fine Arts is honoured to present for the first time in Hong Kong a solo exhibition of acclaimed photographer Ori Gersht. The exhibition will feature a new series of photographs in which the artist has captured the dynamic explosion of mirrored glass reflecting meticulously rendered floral still-lifes, resulting in a poignant and evocative group of photographs that are at once highly choreographed and entirely accidental. In On Reflection Gersht examines the subjective and immutable power of photography, the fragility and transience of life, and the fluid relationship between creation and destruction.
In recent years Gersht has been fascinated by still-life genre painting: its historical significance, coded references and metaphorical implications. For the On Reflection series, Gersht and his studio spent months fastidiously crafting silk flower arrangements, precisely replicating those seen in three Jan Breughel the Elder still-life paintings located in the Kunsthistorisches Museum in Vienna. These vases of flowers were then placed in an elaborately constructed studio in front of glass mirrors. Electrical charges were sent into the mirrors while Gersht captured the explosion with various large format digital cameras. One camera was sharply focused on the surface of the mirrored glass, capturing the shards and fractals of the glass created by the destruction, with the reflection of the flowers blurred among them (these works are titled Material). Another camera was focused at twice the distance, instead focusing on the reflection of the sumptuous flowers as they seemingly disintegrate during the violent destruction of the mirrors (these works are titled Virtual). Lastly, for the group of works titled Fusion within the On Reflection series, Gersht was able to simultaneously capture both the materiality of the glass and the reflections in the mirror by using a hammer to send shockwaves to a steel plate on the reverse of the mirrors. Each of these cameras captured the same event but offer vastly different imagery, demonstrating that a single objective truth cannot exist, even through such a representative medium as photography. The still-life serves as a powerful template for Gersht to examine the tenuous boundary between harmony and chaos, the ephemerality of beauty and life, and the destructive effects of time and discord.
Gersht’s photograph On Reflection, Material E01 (2014) captures the split-second shattering of the glass with scientific precision, revealing minute details of craquelure on the backing of the mirror and the sublimely beautiful fracturing of the glass as it explodes, while the hazy jewel-toned still-life remains a haunting presence in the background. In contrast, On Reflection, Virtual E01 (2014) renders the vase of flowers with great clarity and vibrancy, recalling the majestic oil paintings that inspired the series, yet upon closer inspection a dissolution of this tranquil representation is evident. On Reflection, Fusion B05 (2014) combines both of these techniques, depicting a vortex of irregular shards of glass and within them the sharply detailed reflection of the resplendent flowers.
ABOUT THE ARTIST
Born in Tel Aviv, Israel, in 1967, Gersht received a bachelor’s degree in photography, film and video at the University of Westminster, London, and a master’s degree in photography from the Royal College of Art, London. Gersht has had solo exhibitions at such prestigious institutions as Tate Britain, London; Hirschhorn Museum and Sculpture Garden, Washington, DC; Museum of Fine Arts, Boston, MA; Tel Aviv Museum of Art; Yale Centre for British Art, New Haven, CT; and The Jewish Museum, New York, NY. Gersht’s work is included in numerous private and public collections around the world, including the Museum of Modern Art, San Francisco, CA; the Solomon R. Guggenheim Museum, New York, NY; Los Angeles County Museum of Art, CA; The J. Paul Getty Museum, Los Angeles, CA; Victoria and Albert Museum, London; and Israel Museum, Jerusalem. Gersht currently lives and works in London.