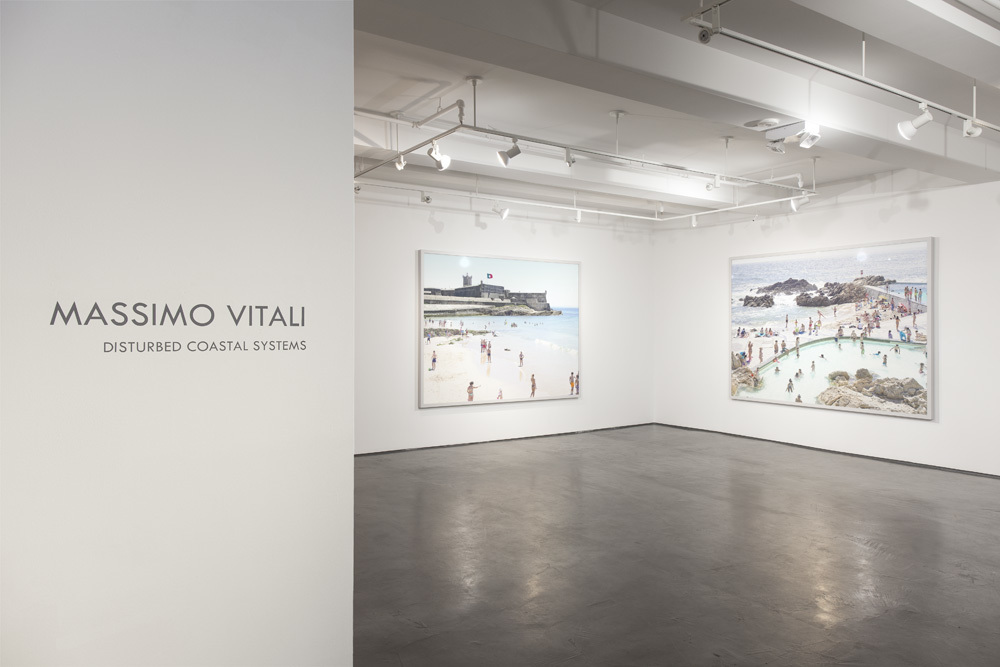 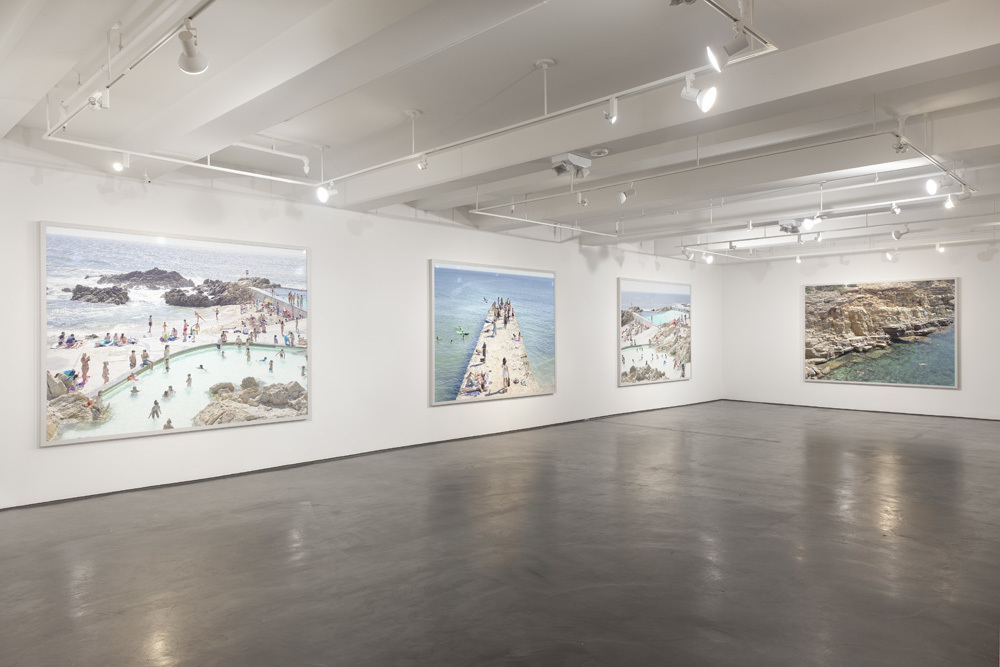 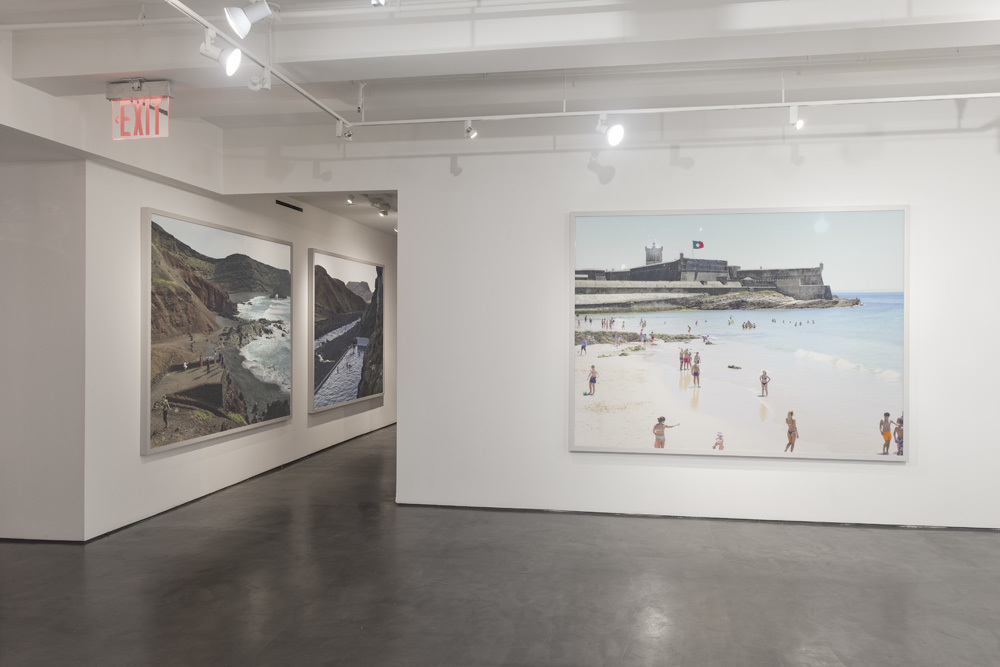 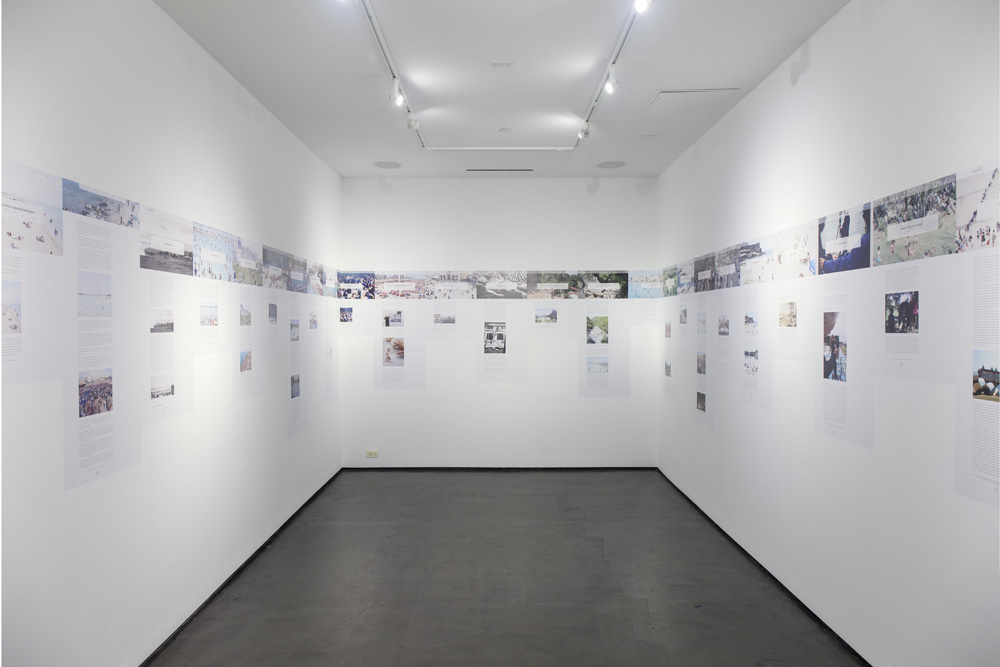 The tension between human habitat and the natural world is always present in Vitali’s work, yet is even more emphasized in the current pictures. In one, the massive Praia da Torre Fortress shadows a beach in Portugal; in another, the Praia do Moinho juts out into the water, less protective than glowering—though whether it menaces the ocean or the swimmers depends on your point of view. Concrete pools box off becalmed sections of water
from adjacent rivers and seas, or a concrete pier juts out beyond a beach, its hard rectangular lines in unavoidable contrast—conflict?—with the sinews of sand and surf. What land is visible is often sere and forbidding: rock cliffs in which wispy shrugs have taken tentative hold, gravelly beaches, lumpy hills covered in dry grass.

It takes an act of will to turn these environments into playgrounds. And indeed, though some of Vitali’s human subjects revel in the surroundings—a girl turns a cartwheel here, a boy goes for a cannonball there—many of the human players stand with their gaze aimed at the horizon as if keeping watch, for a storm, maybe, or a shark fin. Then, too, this is the coast along which more than a million Syrian, Afghan, and Iraqi refugees first arrived in Europe—not all of them alive. The refugees aren’t on your mind when you first look at the pictures, but once you think of them you can’t stop looking for them just beyond the edge of the frame.

And as in so many Vitali pictures, there are always one or two people regarding the camera. In some cases the gaze is quizzical, if not downright suspicious; in others, it’s self-consciously boastful, as if subjects were bombing a gigantic selfie. Their gaze reinforces our sense of ourselves as voyeurs, but the smallness of each individual face amidst the vast sea emboldens us to step a little closer, stare a little harder. There is always an imminence in these vast scenes, as if, if the beachgoers wait long enough, something will happen. Yet the swimming and sunbathing and standing around are all that ever happens, and one can almost see the relief in the faces of those who are packing up or showering off in preparation to leave. Yet somehow one knows they’ll be back tomorrow.

Massimo Vitali (born in Como, Italy, 1944) studied photography at the London College of Printing. He worked as a photojournalist in the 1970s, but at the beginning of the 80s a growing mistrust in the belief that photography had an absolute capacity to reproduce the subtleties of reality led to a change in his career path. He began working as a movie camera operator, before beginning a fine-art practice in 1995. Vitali’s work has been collected in four monographs: Beach and Disco, Natural Habitats, Landscapes With Figures, and Landscapes With Figures 2. His photographs have been published in magazines, newspapers, and other periodicals around the world. Additionally, his work is represented in the world’s major museums, including the Centro de Arte Reina Sofia in Madrid, the Guggenheim Museum in New York, the Museum of Contemporary Art in Denver, the Fond National Art Contemporaine in Paris, the Centre Pompidou in Paris, the Musée National d’Art Moderne in Paris, the Fondation Cartier in Paris, and the Museo Luigi Pecci in Prato.