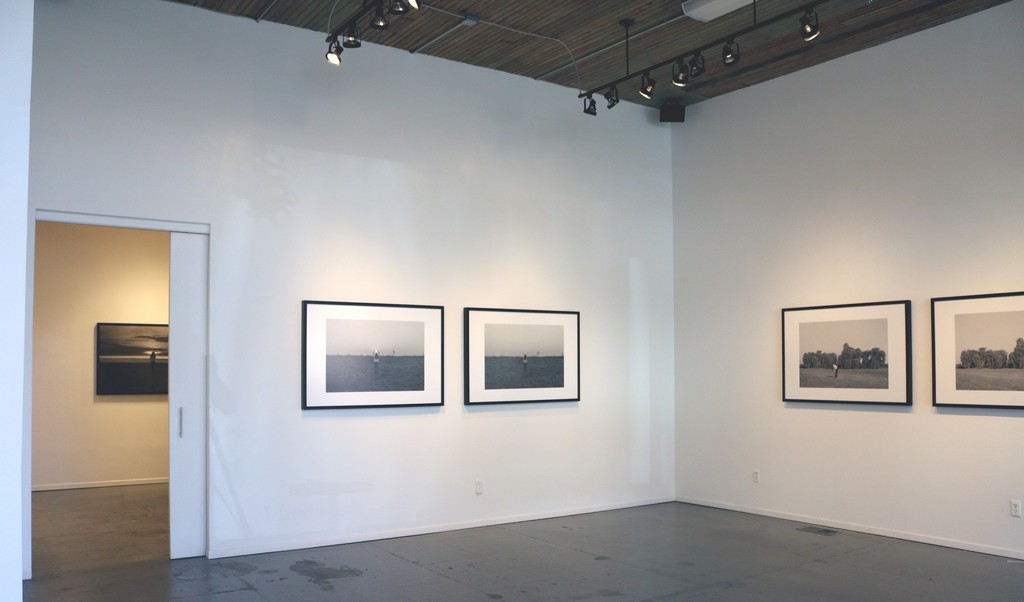 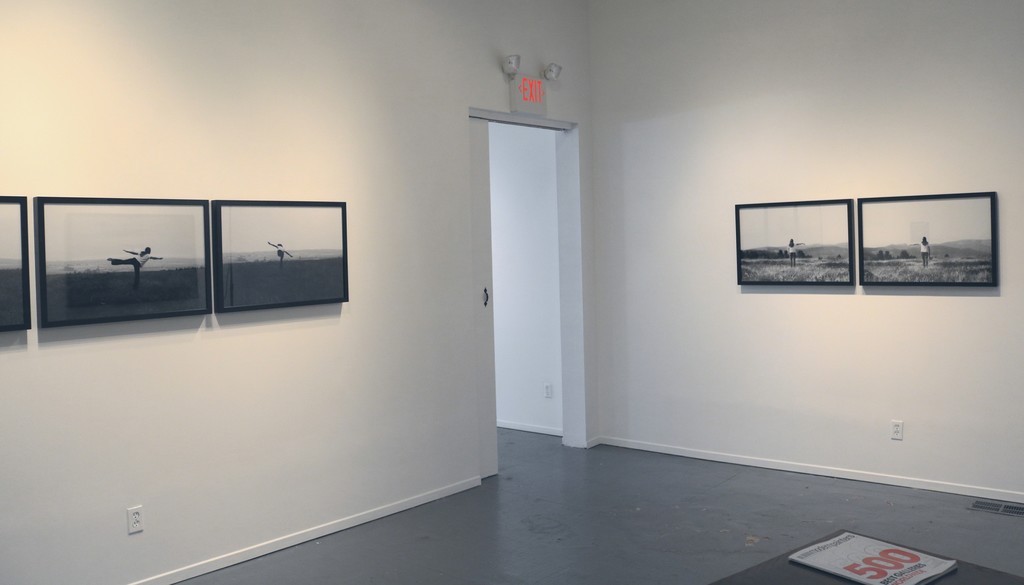 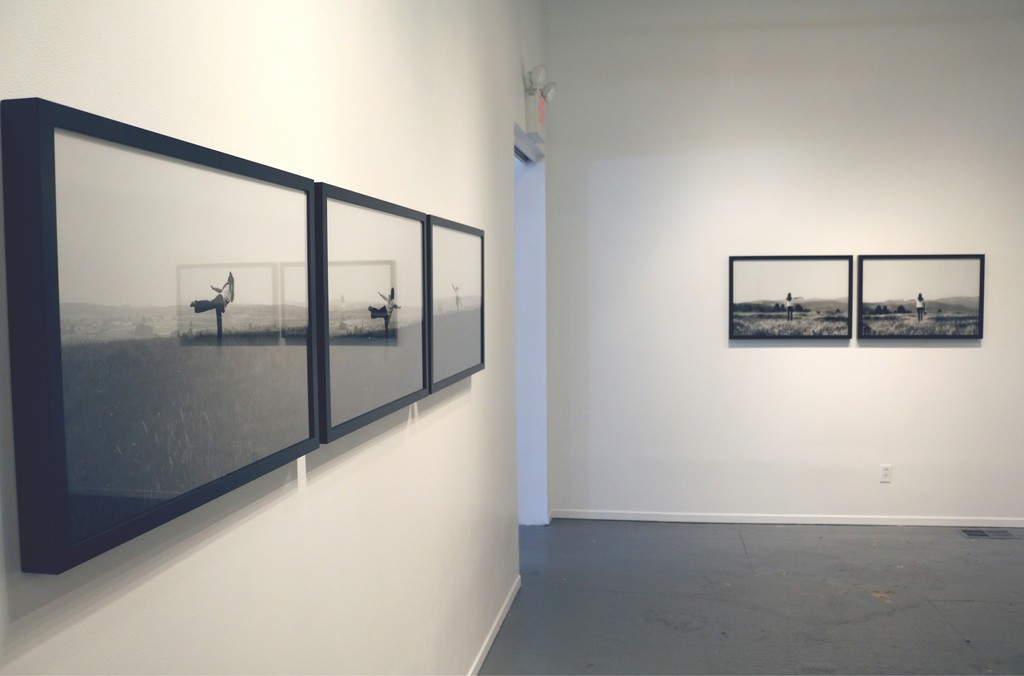 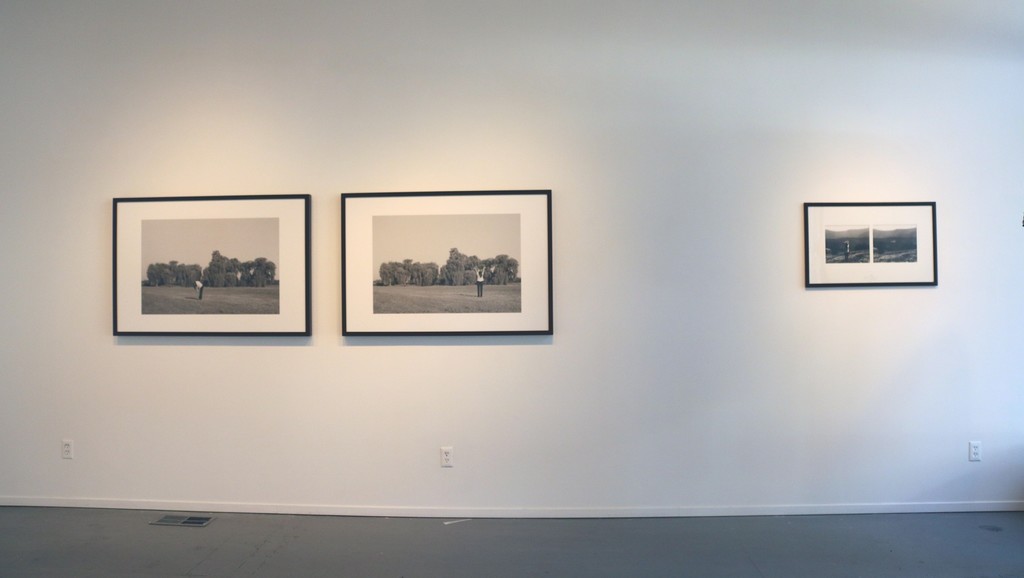 German artist couple Barbara (born 1940) and Michael (born 1944) Leisgen’s photography utilizes natural elements as mark-making devices. In their Mimetic works from the 1970s, a crucial moment in which the Leisgens’ works were a reaction against the conceptual photography coming out of Düsseldorf, Barbara’s figure becomes the writing-force within the landscape. This work is a counterforce to their ongoing Sunwritings series, where the camera moves opposite the sun, allowing that celestial body to burn bright lines resembling squiggles, figures, and script into the image. The homocentrism of the Mimetic works replaces the heliocentrism of the Sunwritings, adding fresh nuance to their oeuvre. Barbara stands with her arms and legs outraised, as if offering prayers to the sky or earth. This work has a distinct place in the canon of Land Art, as well as ties to the work of Ana Mendieta. The body becomes a marker within the landscape, bisecting it, and accentuating its shapes. As the recording of a natural trace, a research concerning the body and experiments related to Land Art, Barbara Leisgen’s silhouette is set, and leaves its fleeting trace in landscapes; the actions involve stretching out her arms to follow the contours of undulating countryside (the Paysage mimétique and Mimesis series), or to include the sun in an arc drawn by her arm while she is seen from behind in the center of the image. This is not merely imitating nature through its gestures; it describes, in the sense of tracing, and channels it as well. The (re)appropriation of the landscape is subjective, the silhouette of Barbara Leisgen being displayed in the landscape, inscribing its mark therein is ephemeral.

The pictures recall the visions of German Romanticism, notably the pictures of Caspar David Friedrich - his 1818 painting Morgenlicht being the figurative model for the Leisgen's Mimesis works, although Friedrich's paradigm for considering nature as sacred is amended. One might see this as an anthropocentric romantic perspective such as the French Romantic view gave us. And yet, despite the sublime aspect of the photographed scenes and the preciousness of the prints which, beyond black and white, allow us to imagine a range of colors in the dazzling light, their images also refer back to the naivety and intrinsic nostalgia of souvenir photographs. The actual viewer is placed in a specular perception, being led to look at a woman posing in a natural expanse. By doing so, Barbara and Michael Leisgen are the precursors of current landscape approaches, relying simultaneously on a modernist and postmodernist viewpoint.
Lichtspiel opens at beta pictoris gallery on September 9 and runs through October 7, 2016. The opening reception will be hosted at beta pictoris gallery from 6:00-8:00 pm on September 9, with Barbara and Michael Leisgen in attendance. The artists are available for interviews; please contact Guido Maus to schedule. High res images of the exhibition are available through beta pictoris gallery.

beta pictoris gallery / Maus Contemporary is a contemporary art gallery and space dedicated to supporting creativity with a focus on experimental and issue driven works. Through representing emerging, established, and internationally recognized artists, the gallery is committed to bringing a global perspective to contemporary issues and practices across the visual arts. The program consists of exhibitions, print publications, and media outreach.