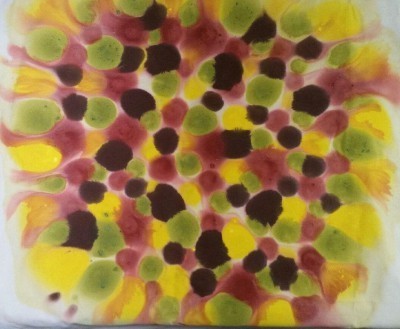 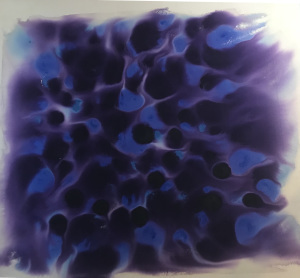 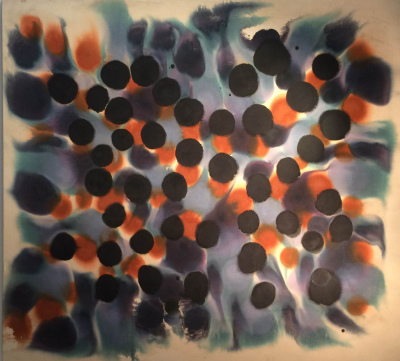 Bethesda Fine Art is pleased to announce the upcoming solo exhibition of paintings by Kenneth Victor Young at the American University Museum, Katzen Arts Center, opening April 6, 2019. Dexter Wimberly will be the curator and essayist for the show.

Born in Louisville, Kentucky, Young moved to Washington, DC in 1964 where he began to paint abstract forms with washed acrylics on unprimed canvas. Before launching into his career as a visual artist, Young served in the Navy, received a bachelor of science degree in painting and humanities from the University of Louisville, and taught at the Duke Ellington School and the Corcoran School of Art. Young had an illustrious 35-year career as an exhibitions designer for the Smithsonian Institution, and his extensive travels during this time helped inform his cosmic abstract style of painting. His love for jazz influenced the movement and vitality of his work. He is known for his floating colored orbs—imagery that attempts to bring order to chaos and that comments on the pandemonium of life.

Young had solo shows at Fisk University and the Corcoran School of Art in the early 1970s. His paintings were included in a group show of American artists in Paris in 1976. Thanks to the recollection of famed professor, artist, historian, and critic David Driskell, Young organized a course for Fisk University art students at the Smithsonian called "Color Me Mankind” that brought them together with museum professionals.

The Washington City Paper published an article by Kriston Capps, “Late Artist Kenneth Young is Finally Getting His Due” (June 2, 2017), highlighting the life of the enigmatic artist:

Kenneth Young’s painting is a stand-out in a room full of them. When the National Gallery of Art reopened its East Building in 2016 following a three-year renovation, the museum devoted a chunk of gallery space to legends who worked in the District. Names like Gene Davis. Kenneth Noland. Relative (1968), one of Sam Gilliam’s drape paintings… [is] pinned along one gallery wall. Morris Louis’ Beta Kappa (1961), maybe the single best-known painting of the Washington Color School, hangs on the adjacent wall…. Among their works hangs Red Dance (1970), a stain painting by Young. It’s a storm of acrylic dabs on an unprimed canvas, blotches of ochre and burnt orange, a red-shifted Milky Way. The mark-making is distinct, but the mode is easy to identify. This is a Washington Color School painting, like and unlike the rest.”

While Harry Cooper, director of the National Gallery of Art’s permanent collection of modern art, didn’t know of the artist previously, he believed that Young’s painting clearly belongs where it is hanging now.

After Kenneth Victor Young passed away in 2017, the S. Dillon Ripley Center hosted a Celebration of Life as a tribute to his long career at the Smithsonian Institution.

His delicate exhibition-design drawings belong to the past, an elegant refinement from a different era. But the reach of his art, his paintings, will extend long into the future. Modernism, abstraction, formalism, black images, and black experience—these modes and ideas are always being revisited and overturned. (Kriston Capps)

Early in 2018, Young was part of a three-person show titled The Language of Abstraction at the University of Maryland University College along with Ed Clark and Richard Franklin, Director Eric Key, Curator Jon West-Bey. Bethesda Fine Art is proud to work with the directors and curators of both shows and to represent the paintings of Kenneth Victor Young. With sincere gratitude to Jack Rasmussen, Director, we look forward to a dynamic spring show at the American University Museum.

The friendship forged over the last five years between Margot Stein and Lori Rapaport with Kenneth Victor Young, and now with his daughter Leslie Young, has enabled this show to come to fruition.