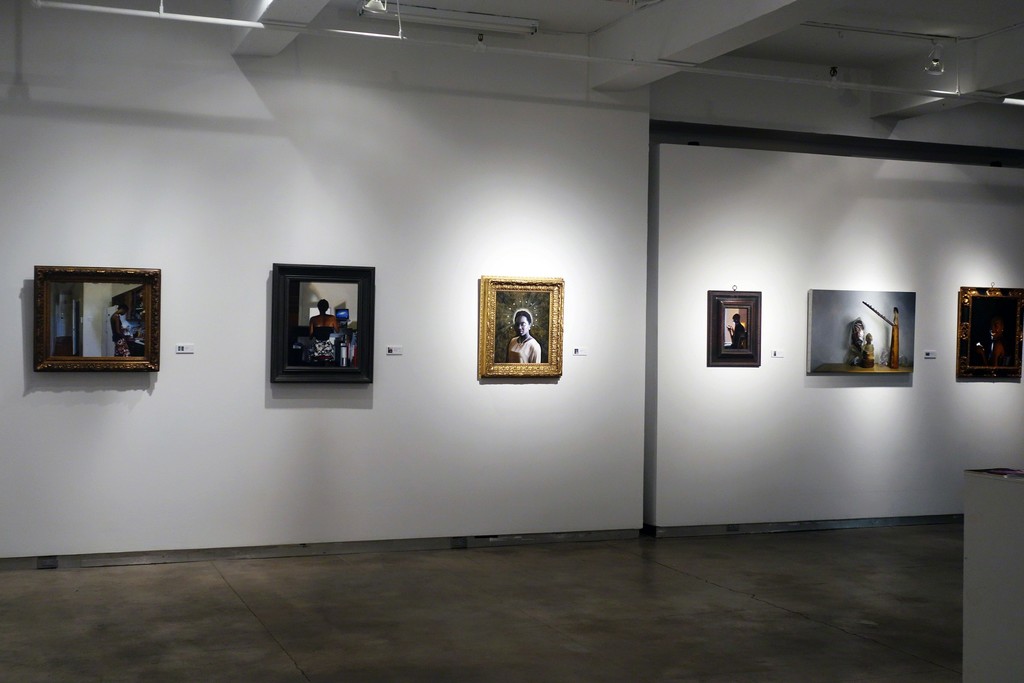 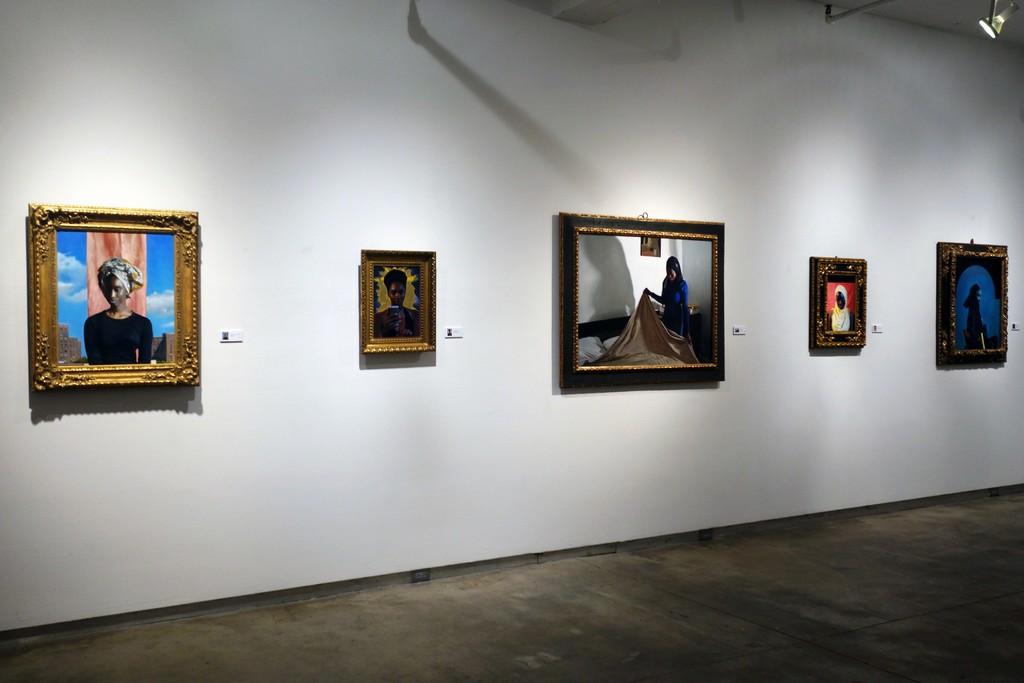 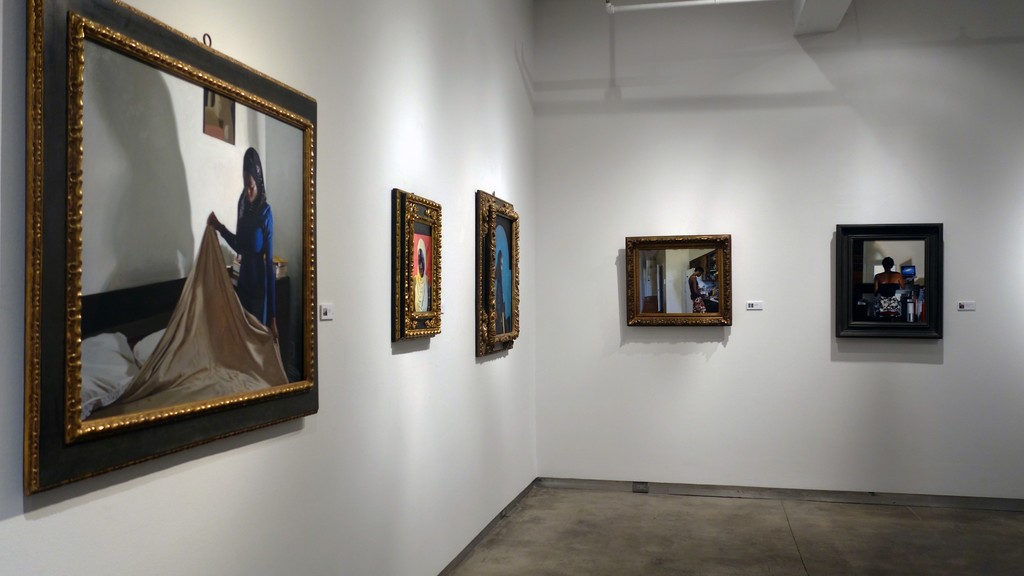 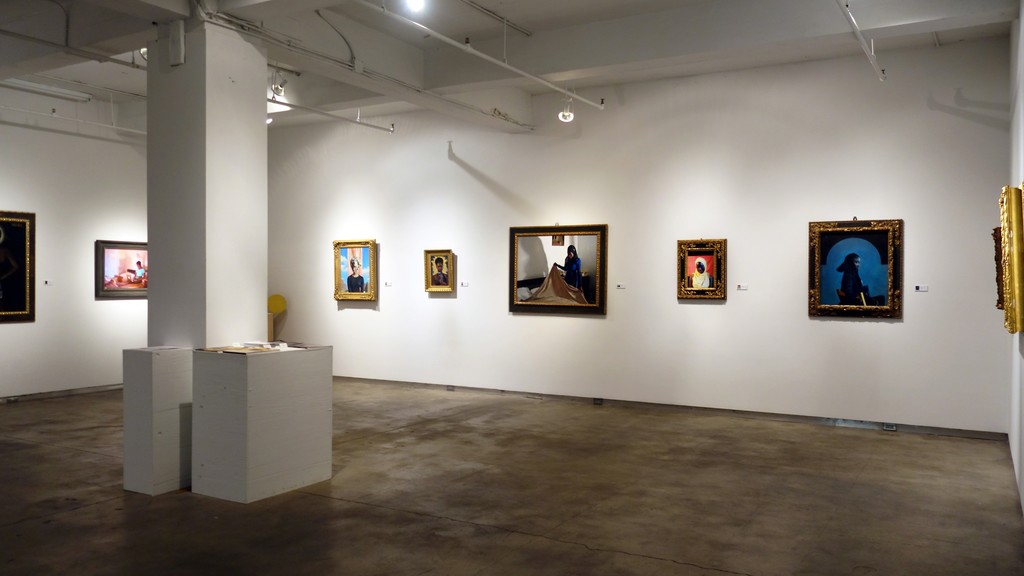 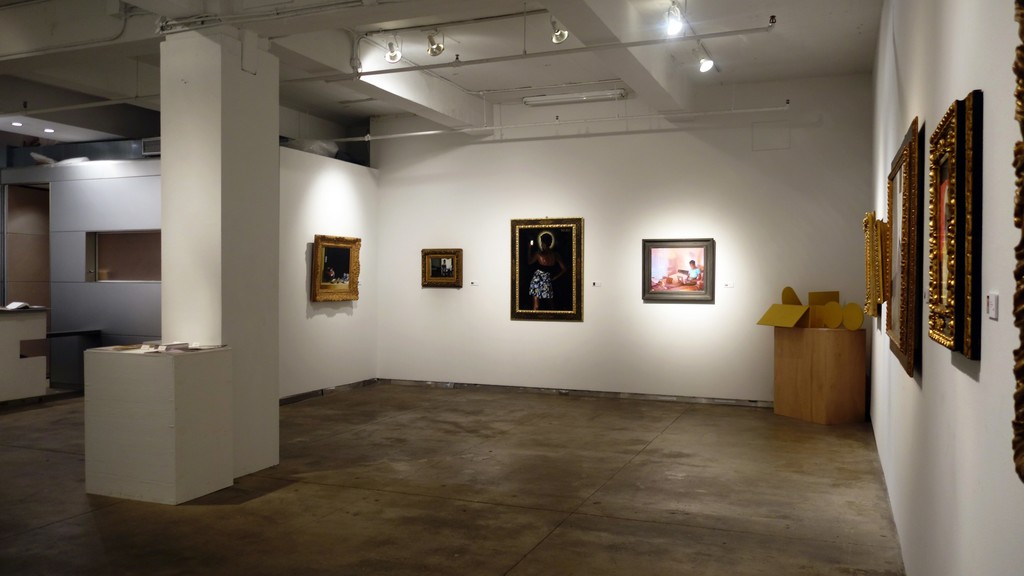 New York, NY- For the first time in four years the Bill Hodges Gallery will hold a contemporary solo artist exhibition. The gallery has been selling art since 1979 and exhibiting in the Manhattan gallery scene since 1993 and is pleased to announce its sixth exhibition at its Chelsea location. Jas Knight: Euhemerized, will be on view July 10 – July 25, 2015 at 529 W. 20th Street.

In this exhibition of sixteen oil paintings, Knight combines traditional 16th and 17th century realist painting styles with references to contemporary African life and conflict. The term euhemerized refers to mythology that, through the process of interpretation over time, is considered to be real historical occurrence. As this title suggests, Knight is interested in the flux between reality and fiction.

Woman with Blue and Black (right) is an oil painting on linen of an African woman sitting in a chair as she stares with an enigmatic smile. Her figure is shown mostly in silhouette against a dark blue background with a minimal architectural arc framing her head. She sits, relaxed but still guarded, posed with one arm resting over back of the chair. At first glance, she dawns a dark medieval cloak or Renaissance riding hood, but upon closer examination, she appears to wear a hooded sweatshirt with a zipper barely visible behind her posed arm. In addition, she sits in a wooden café chair, a contemporary development. In theme with the exhibition, Knight amalgamates past and present, disrupting a linear sense of time within the work.

Painted in oil with gold leaf on panel, Beatific is a detailed portrait of a young African-American woman with her head surrounded by a bright cream colored halo which breaks through a dark cloudy background. Rays of gold leaf radiate from her coiled hair in allusion to religious portraiture of the Renaissance. However, Knight engages with contemporary themes; his sitter holds an iPhone, perhaps taking a photo of herself in a mirror. ¬¬Knight often paints his figures surrounded by vices of contemporary culture. While the inclusion of Apple products in his work may seem a passive detail, it is meant to be a subtle reference to present-day use of African conflict minerals in many electronic devices all over the world. Substances such as tin, tungsten, and gold ore are being sold to American technology companies by various armies and rebel groups in Northern Africa to fund war and violence. Knight’s models engage in a passive type of violence, indirectly contributing to the problem.

While some of Knight’s paintings refer to tropes of art history and conflict in Africa, several of his works are genre paintings presenting the daily lives of his African models. Autumn (left) displays a young African woman in action, making a bed. Wearing a sequined hijab headpiece and a blue sweater, the woman stands in a small bedroom beside the bed, looking down while holding a beige sheet, gently pulling it over the pillows. The calmness of this scene suggests the banal but universal responsibilities of everyday life.

Anthony “Jas” Knight was born in 1977 in Bloomfield, Connecticut. He received a BFA from the University of the Arts in Philadelphia, Pennsylvania, and he has been awarded the Greater Hartford Arts Council Innovation Grant and the Leonard Andrews Foundation Special Scholarship. Knight’s paintings have been shown in several group exhibitions and his work is included in multiple private collections. Knight currently works and resides in Williamsburg, Brooklyn.