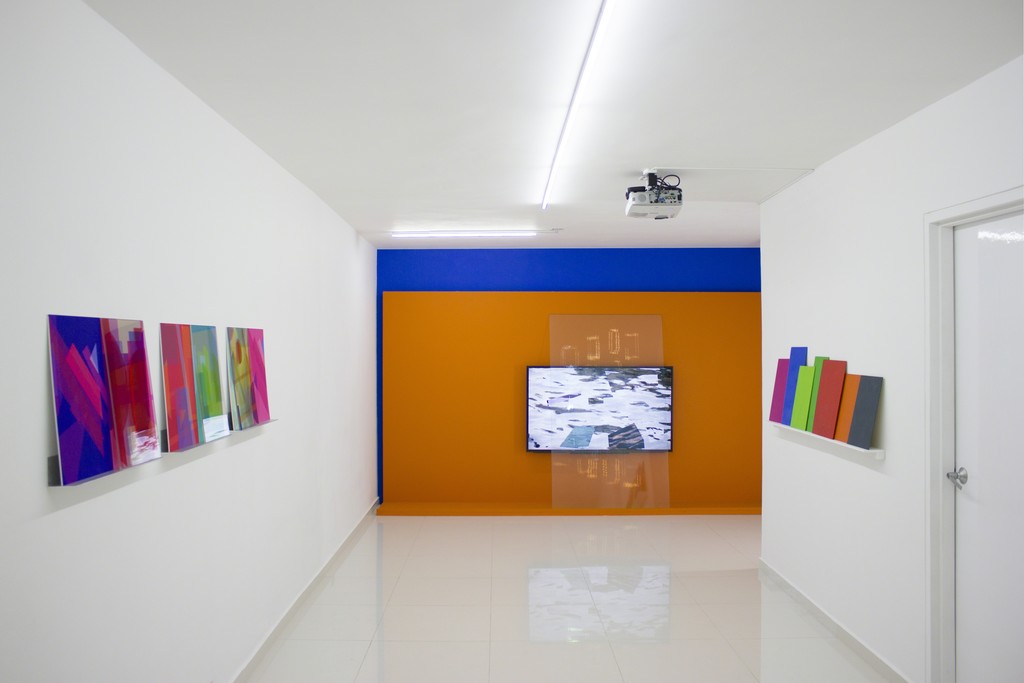 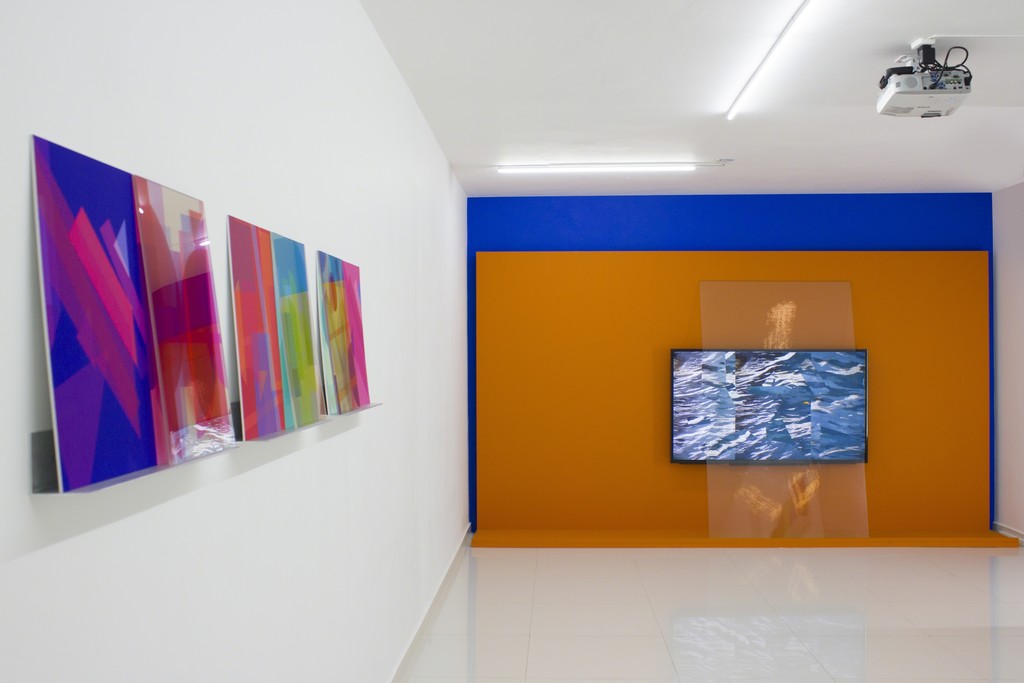 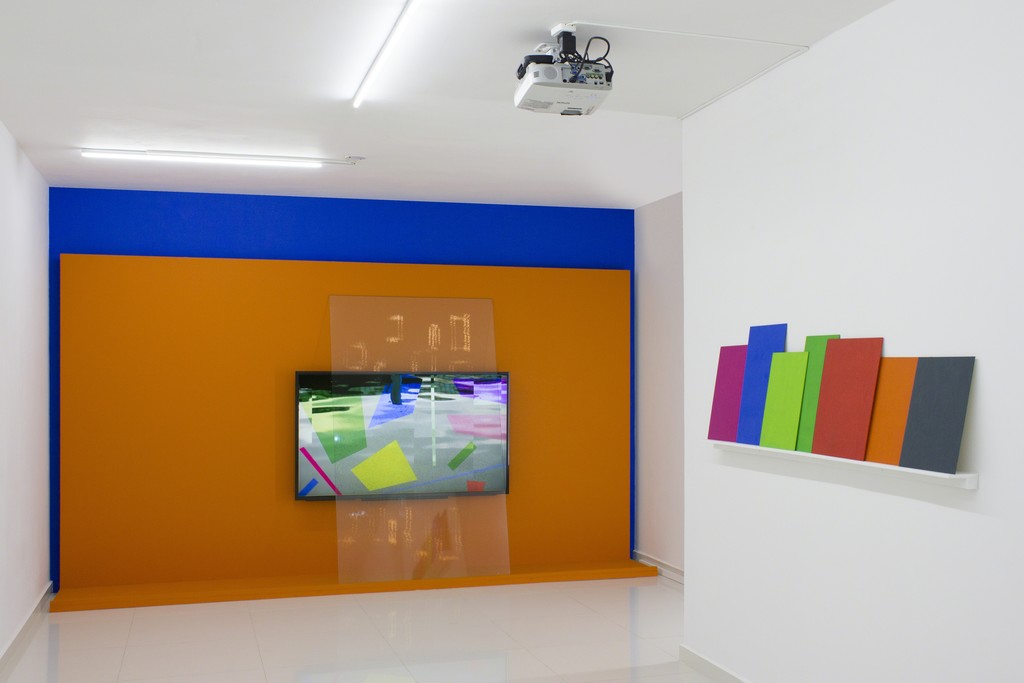 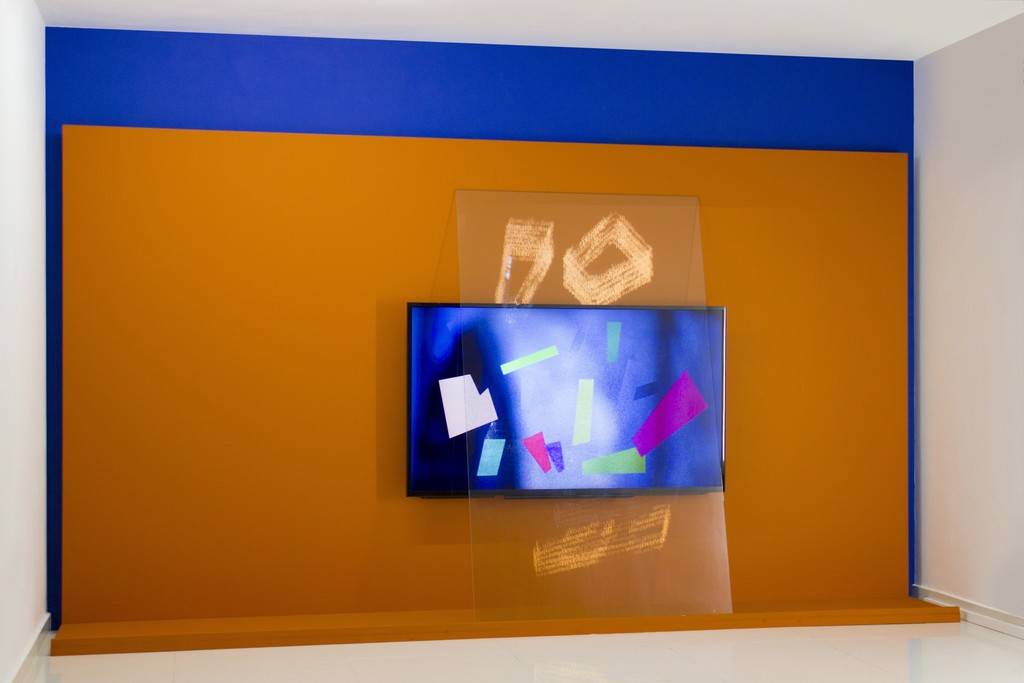 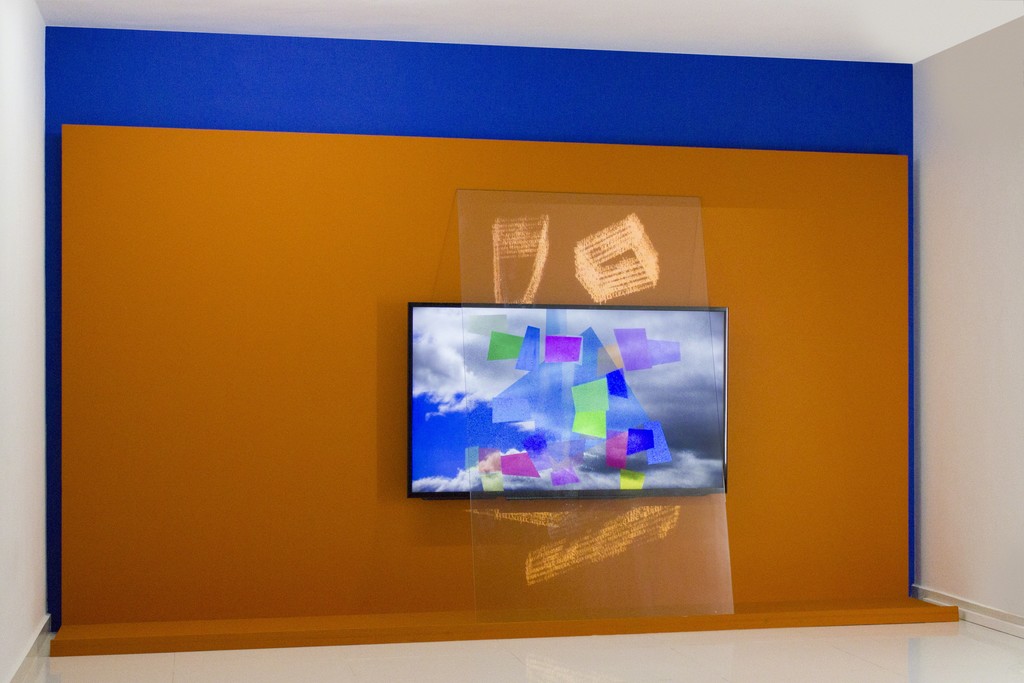 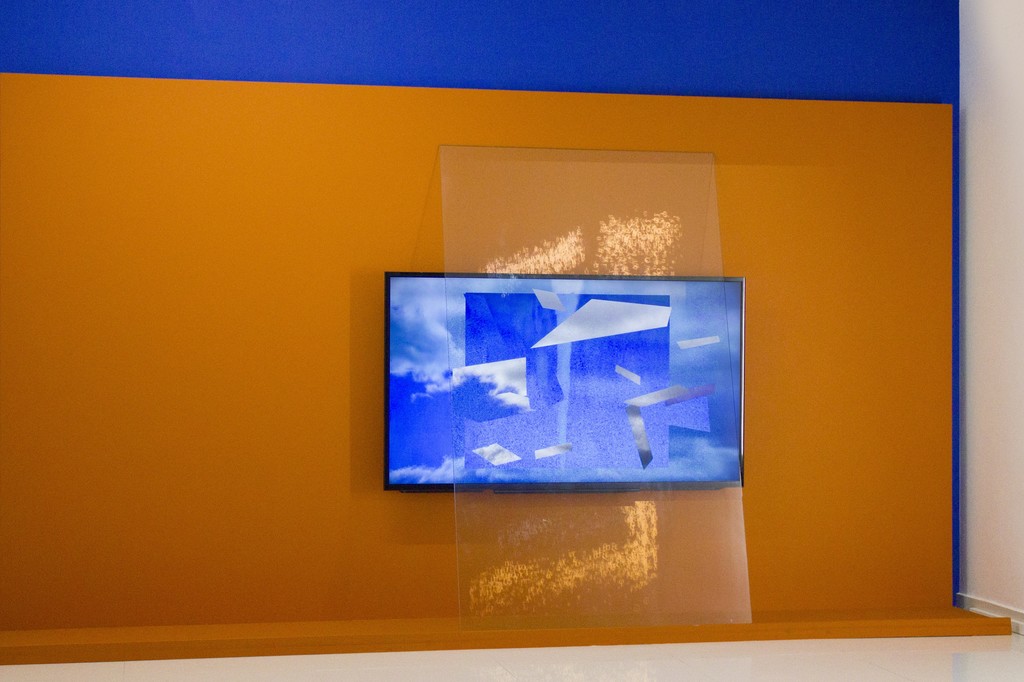 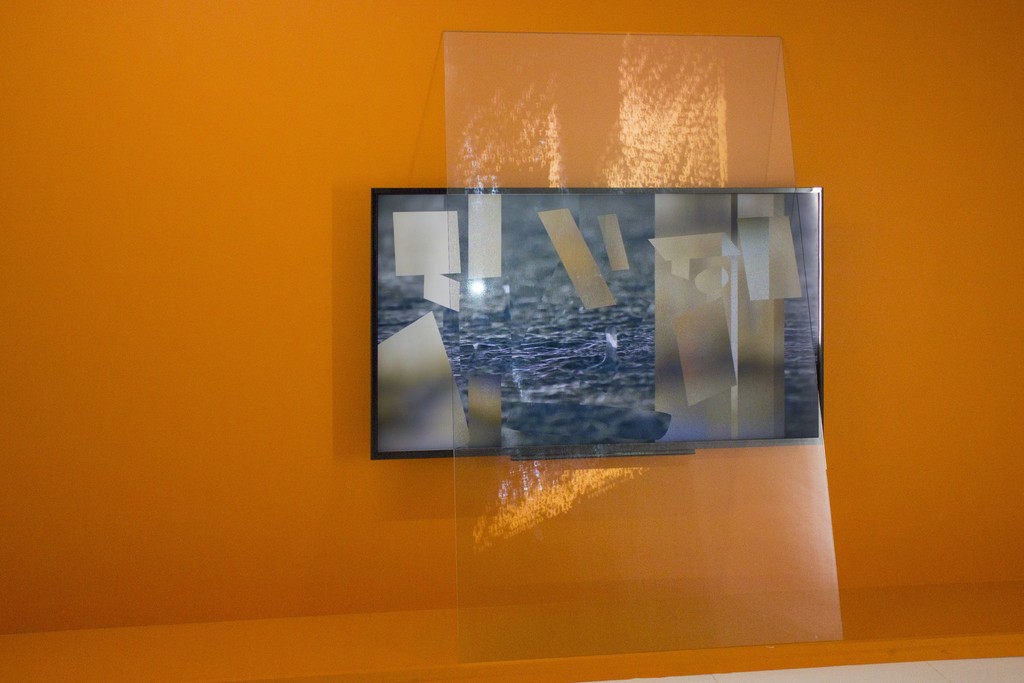 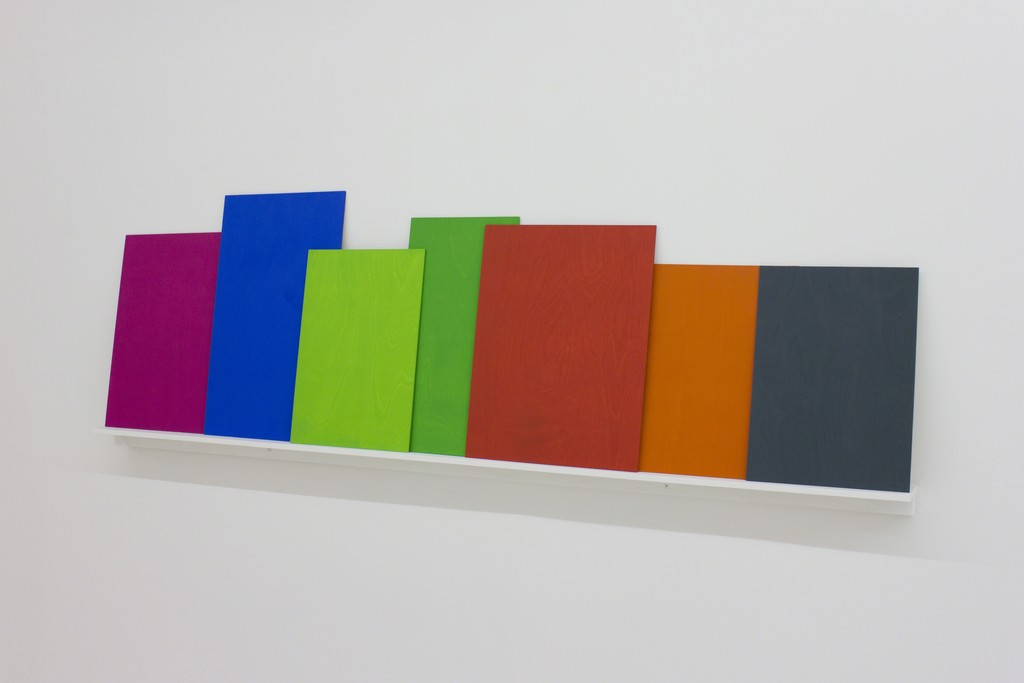 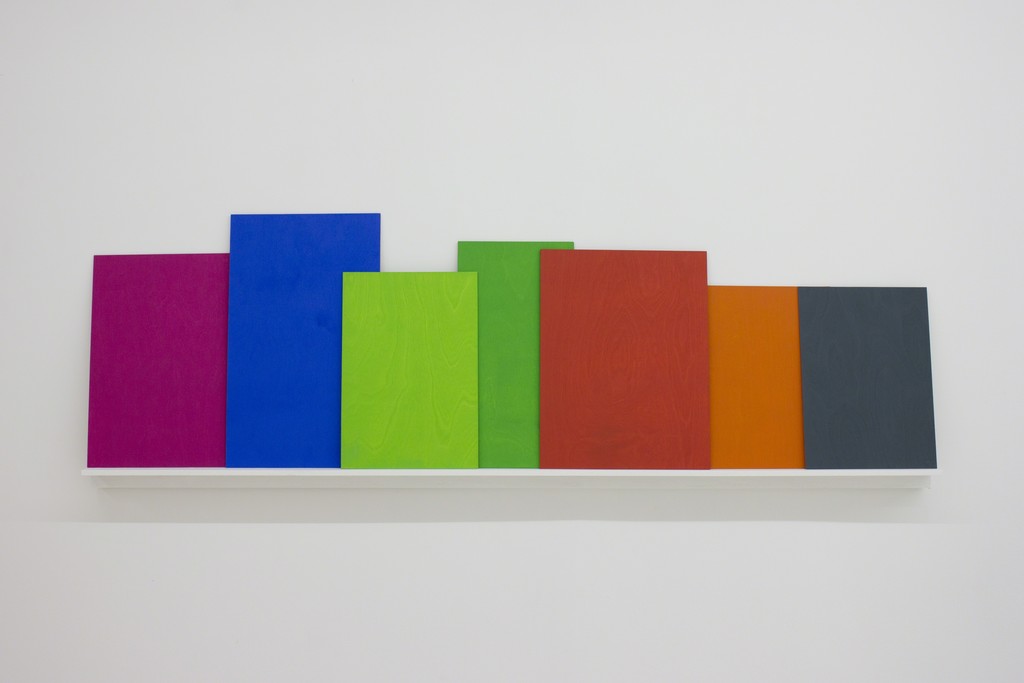 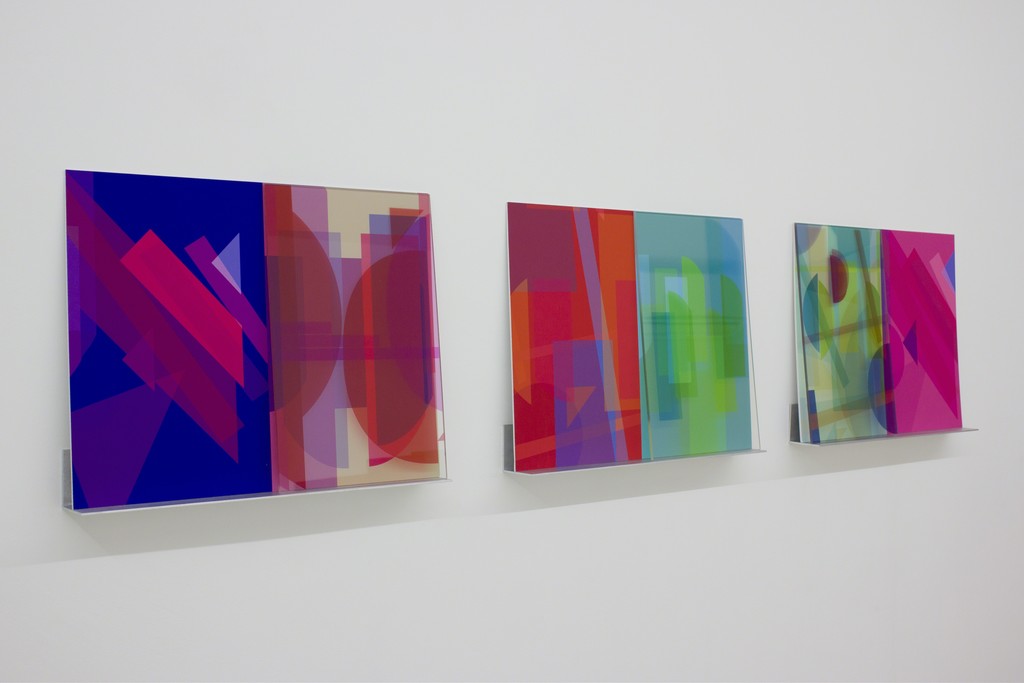 BEYOND SENSE
On the Arche-types of Monika Bravo

"Where to begin?
I don’t even know how to ask.
Too many tongues are mixed in my mouth. But
at the crossing of these winds,
very diligent, I immerse myself
in the laws of the heavenly grammar: I am learning
the declensions and ascensions of silence."
Dan Pagis*

As if entering an unknown landscape—pure and remote, without a known history or familiar signs—we are placed here on a sort of journey, perhaps a journey inward, similar to the one that Basque writer and philosopher Miguel de Unamuno relates to our experience with Nature, or what Mallarmé called the Spiritual Universe, or what Malevich understood as the space of the wilderness. Beyond the limits of personal, individual experience, in an attempt to identify spiritually with the cosmic environment of the universal landscape by means of the artwork, our task seems to be designed to approach a sort of primal entity having no meaning or time.

This journey might take a lifetime, but here, through the magic of the artist’s devices—which are not really different from the “instant Nirvana” that Timothy Leary talks about when referring to LSD—we may experience that collective, inherited, unconscious idea, the pattern of thought or image, that Jungian psychology calls Archetype. And yet, this is not necessarily a direct experience, but a reading.

We want to read from within a place that is not the collection of the work’s beautiful elements, its singular features, or its memorable moments, but rather the intensity of its visual and aesthetic palimpsest, of colors and letters that do not seek harmony or reason. Instead, they are all signs for the absence of definable meaning. So we may say that we are reading from a site in which we are placed on the edge of an abysmal void.

We have been here before—you may think. And someone says that, after White Square on a White Ground, “it almost seemed as though Malevich had created a black hole with his paintings that devoured modern art and then gave birth to new universes. After Malevich, paintings were ‘purified’ and ‘emptied.’ Painters pursued art ‘as such,’ reducing their paintings to pure color or geometric form and stripping them down to their fundaments: the painted surface and the support. Archetypes were conjured up and final images painted once more. There were images of nothingness, of a sublime something, and an ominous everything. Painting became ontological and philosophical, entirely material or entirely spiritual” (1).

Indeed we have been here before—long before. But where to begin? In the beginning was the word, it is written. But the word in this place is not a word, and it is not even a beginning. The letters we encounter here are examples of a modular stencil sans-serif typeface, Archetype Albers, based upon a series of experiments between 1926 and 1931 by Josef Albers at the Bauhaus. Here, they are not used to make up any word, and they can hardly make any sense. The artist declares that the sound of the word is beyond sense. In other words, “the sound” (as form) begins not with a meaning, but with vibrations, waves, and energy, a sort of rhythm that perhaps might be capable of transforming itself into meaning. But what meaning are we talking about when addressing what is beyond sense?

Referring to poetry, Amittai Aviram explains that “the irreducible element of unreadability” can be identified with the principle of Dionysus presented by Friedrich Nietzsche in his The Birth of Tragedy, and, indeed, the relation between poetry/art form and meaning matches up with Nietzsche’s dyad of the somewhat allegorical figures, derived from Greek myth, of Dionysus and Apollo. “[T]he relation between them is what makes poetry possible; neither can really exist in isolation” (2). The author goes on to say that, beyond music and intoxication, Dionysus offers a profound truth: “that our … individuality, and the … discreteness of everything in the world that we perceive, is in fact a product of the very veil of illusion for which the Apollinian principle is responsible. In other words, the potentially overwhelming truth is that the ‘real reality, behind all this show of appearances’ (to borrow Walt Whitman’s phrase), is a kind of nothingness, a primal unity, having no space, time, or other mode of individuation” (3). In Derrida’s terms, “there is nothing outside the text … no entities that could be identified as such, since the very process of identification requires such things as subjectivity and perception”. As Aviram reminds us, in Derrida’s view, “these functions are aspects of the ‘text’ —the sign system—in which we live and breathe, insofar as we are we. Our identities and identifiable individual entities around us are constructs made possible, according to Nietzsche, by the veil of illusion, or, according to Derrida, by the system of language” (4).

The reading gets a bit more complicated, not just because of Derrida’s emphasis on the elusive relationship between words and images: “And if I love words it is also because of their ability to escape their proper form, whether they interest me as visible things, letters representing the spatial visibility of the word, or as something musical or audible. That is to say, I am also interested in words, paradoxically, to the extent that they are nondiscursive, for that’s how they can be used to explode discourse… It’s when words start to go crazy… and no longer behave properly in regard to discourse that they have more rapport with the other arts, and conversely this reveals how the apparently nondiscursive arts such as photography and painting correspond to the linguistic scene..” (5). In addition to all this, the complication comes from the proliferation of colors, which actually distinguishes this and most of Bravo’s recent works.

Following Albers, color is constantly changing in the work, and we always see it in relation to the colors that surround it. It is almost impossible to see a color by itself, not interacting with its surroundings. In truth, color is understood by comparison and contrast. But, through Albers, Bravo knows that color is deceiving, and that, when he talks about visual perception, he is talking about something deeper than the way we look at the world. Bravo understands that Albers is not giving her a set of rules about color, but different tools and ways to unlock “emptiness”, an aesthetic of the everlasting.

Sonia Delaunay: One who knows how to appreciate color relationships, the influence of one color with another, their contrasts and dissonances, is promised an infinite variety of images.

Mark Rothko: If you are moved only by the color relationships, then you miss the point.

Wassily Kandinsky: Color is the keyboard, the eyes are the harmonies, the soul is the piano with many strings. The artist is the hand that plays, touching one key or another, to cause vibrations in the soul.

Umberto Boccioni: A time will come when the eye of man will perceive colors as feelings within itself.

Hélio Oiticica: Color is the first revelation of the world.

Henri Michaux: One can paint with two colors, and draw with one.
Three, or four at most, have for centuries been enough to men.

Hans Jean Arp: I use very little red. I use blue, yellow, a little green, but especially… black, white and grey. There is a certain need in me for communication with human beings. Black and white is writing.

Kasimir Malevich: Color is the essence of painting, which the subject always killed.

Francis Bacon: All colors will agree in the dark.

Kasimir Malevich: I have broken the blue boundary of color limits, come out into the white; beside me comrade-pilots swim in this infinity.

The sense of that vibration, that feeling, that revelation, that knowledge, that essence, that darkness and that infinity, and the influence of Zaum linguistic experiments in sound symbolism and language creation, distance themselves from any analysis involving decoding or meaning. The references that we may point out lose traction and purpose, since the analysis no longer concerns—as Jacqueline Lichtenstein would put it—a semiotics of representation, but rather what she calls a “pragmatics”, where the work is not conceived “on the model of a language composed of signs, in which each element is linked to its natural reference through meaning” (6). It represents nothing; it is only appearance.

What we make of this work depends on the cognitive structure of our mind, rather than on anything we can identify as fundamental or essential attributes of the work itself. There is no escape from our ontological categories, no firm foundation we can reach beneath these appearances. We may say that we are stuck with our cognitive inheritance. However, as we link the sensible and the intelligible, and while our illusions fall away, we begin to see our thoughts and ourselves as contingent beings, inextricable from a reality that we shape and which in turn shapes us, rather than as beings able to detach ourselves so as to contemplate reality as it truly is. Our concepts are part of the game we play to make sense of reality, and they give shape to and frame our understanding. We cannot access what lies beyond our own concepts. Or, as Wittgenstein put it, “whereof one cannot speak, thereof one must be silent” (7).

(1) Ira Mazzoni, Everything and Nearly Nothing: Malevich and His Effects. http://db-artmag.com/archiv/07/e/thema-mazzoni.html

(4) Ibid, 117
Aviram points out that Nietzsche is not to be credited with total originality for this perception, “since it comes directly from Schopenhauer, and it is also prevalent in a variety of very ancient philosophical systems, including Buddhism and Jewish mysticism”.

Born in 1964 in Bogotá, Colombia. Lives and works in New York.

Monika Bravo examines the idea of perception to question the mental construction that is the world we live in. She uses her artistic practice as a tool to decipher her relationship with emotional space. Using images, sound, industrial materials and technology, she creates situations – objects and environments – that allude to recognizable landscapes thus examining the notion of space/time as a measure of reality.

Her installation “The Sound of the Word Is Beyond Sense” is currently being exhibited at the 56th Venice Biennial as part of the Vatican Pavillion.