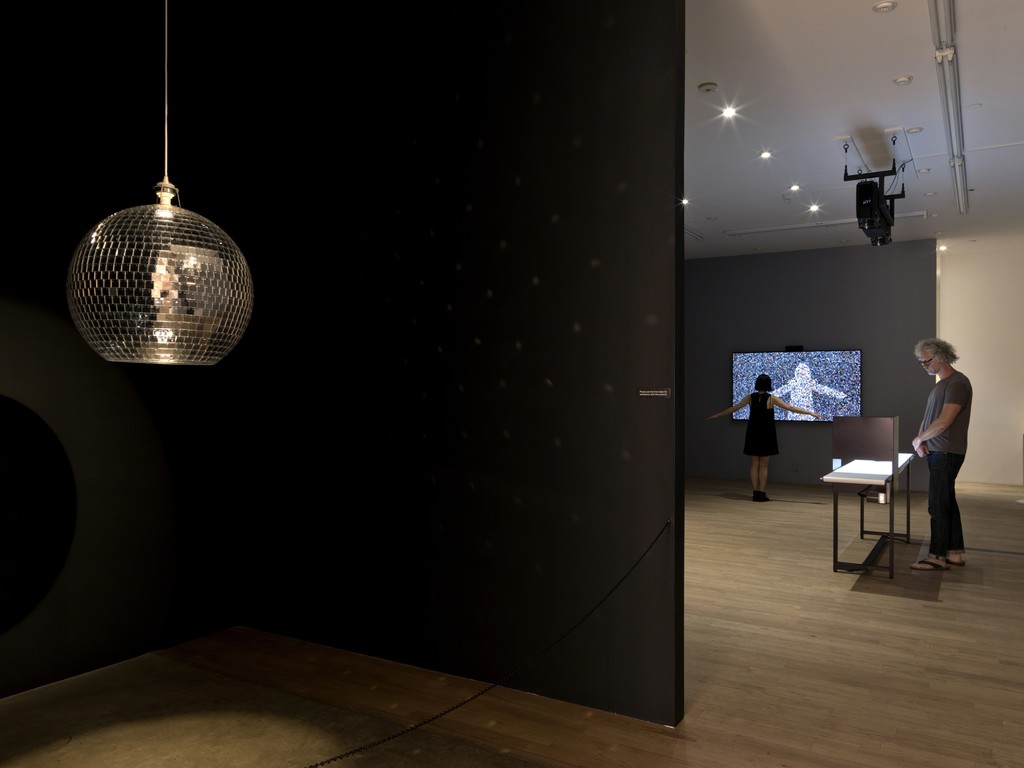 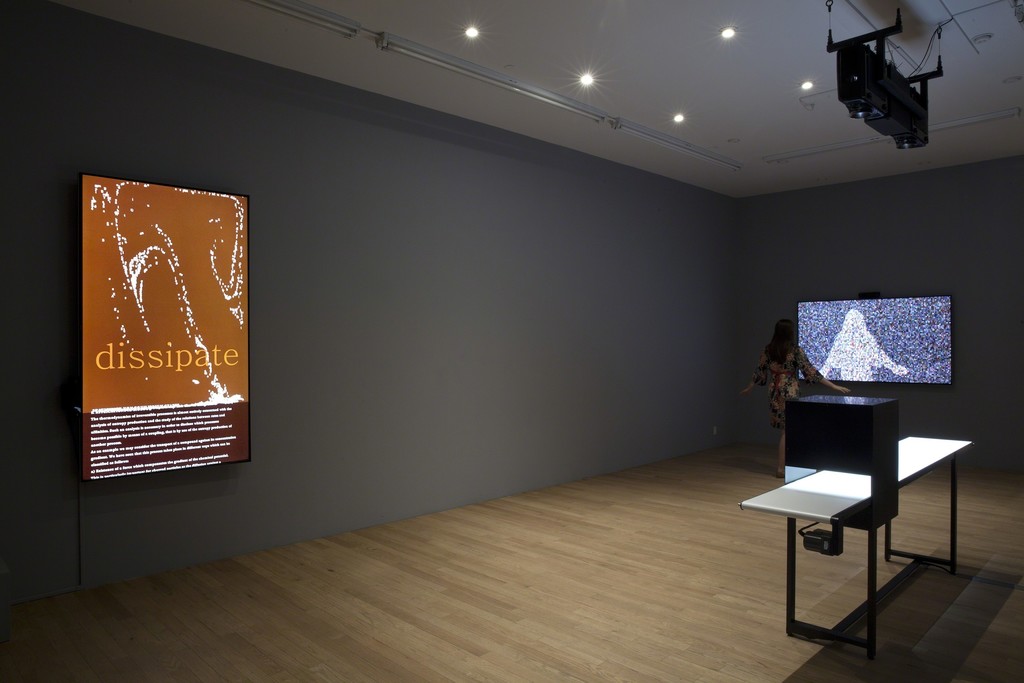 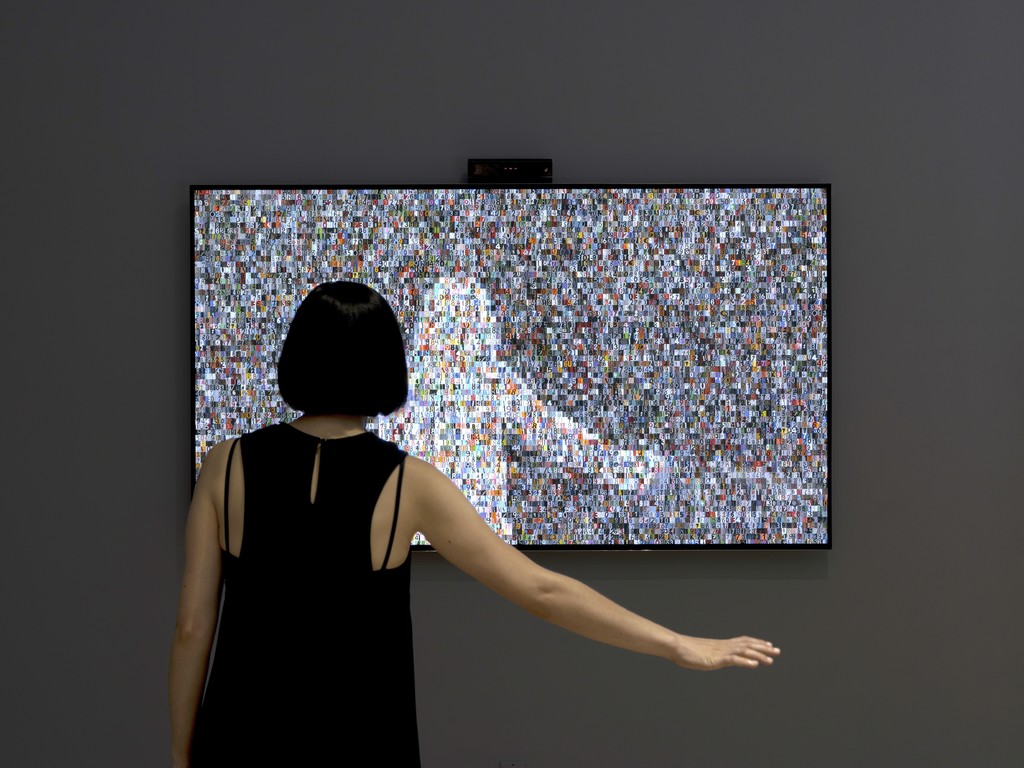 For his seventh solo show at bitforms gallery, Mexican-Canadian artist Rafael Lozano-Hemmer presents recent works that subvert computerized surveillance to construct playful, counterintuitive, and often disorienting experiences. Each of the seven pieces on display in "Lapsus Lumen"—four of them premieres—reappropriate an instance of surveillance culture to create tessellated landscapes: one-way mirrors, airport X-Ray scanners, face-recognition algorithms, full-body tracking, fingerprinting, and other pervasive technologies are transformed into platforms for connection.

As interruptions to a now normalized predatory control regime, the works in "Lapsus Lumen" elicit critical or poetic experiences; yet, the strength of the work rests in the acknowledgment of its own partial complicity with the very technologies that define our society of control. Working with an array of tools, materials, and forms, Lozano-Hemmer’s practice is situated in, while also indebted to, a long lineage of Latin American artists dedicated to an expanded field of experimentation, including the pioneering multimedia installations of Marta Minujín, the computer-generated drawings of Manuel Felguérez, the optical explorations of Gyulia Kosice and Abraham Palatnik, and the relational objects of Lygia Clark and Helio Oiticia.

In his words, Lozano-Hemmer works with light “oscillating between the artifice of a nightclub and the violence of police interrogations.” Throughout the exhibition is a questioning of the supposed purity of light as a medium for expression: contrary to a spiritual approach that seeks enlightenment and unification, the artist uses light literally and figuratively to obscure and create differentiation.

"External Interior" (2015) is an inside-out disco ball made with 1600 one-way mirrors mounted on a transparent acrylic sphere, reminiscent of both Julio Le Parc’s mirrored sculptures and the tessellated vision present in insects with compound eyes. The piece is suspended from pulleys and has a counterweight so that it can be raised and lowered easily. As visitors introduce their head inside the sphere, they see a mise en abyme reflection multiplied kaleidoscopically, creating both a spacious, yet isolated, self-centered experience. Meanwhile, from the outside, the public can clearly see the person inside the sphere.

"Performance Review" (2013) is a photographic series comprising thousands of fingerprints captured by high magnification surveillance equipment from Lozano-Hemmer’s monumental interactive installation, "Pulse Index" (2010). While the distinctive patterns found in friction ridges of the human finger allow for the identification of an individual, here those singularities are subsumed to create an ambiguous image, representing the generalized use of biometry itself. Named after banks—the two selections in this exhibition being "HSBC" and "UBS"—the C-prints in this series are unique, each consisting of 750 fingerprints. Other titles in the series include "Bank of America," "BBVA," "BNP," "Barclays," "Chase," "Citibank," "Deutsche Bank," "RBS," and "Santander."

In "Airborne 6" (2015), excerpts from the book "Introduction to Thermodynamics of Irreversible Processes," written in 1955 by Belgian physical chemist Ilya Prigogine, gradually appear on a flat screen on a black background. As a viewer stands in front of the work a sensor detects his or her presence and renders the letters of the text “airborne,” generating turbulent movements. The letters accumulate slowly until the screen shows tens of thousands of letters, at which point the text fades out, and begins to scroll again from the beginning. This is the sixth piece of a series of interactive installations designed to animate literary, scientific, and philosophical texts on the subjects of complexity and non-linear dynamics, which “read” the public and react to their presence. The work of Prigogine famously defined “dissipative structure theory,” key to the understanding of self-organizing systems that could reverse the maximization of entropy rule imposed by the second law of thermodynamics.

"1984×1984" (2014) is the tenth piece in Lozano-Hemmer’s Shadow Box series of interactive displays with a built-in computerized tracking system. The piece shows a grid of thousands of random numbers extracted from addresses photographed by Google Street View. Scanned by Google from the front doors of buildings around the world, the numbers have an immense variety of fonts, colors, textures, and styles. As a viewer walks in front of the piece, his or her silhouette is represented within the display, and within its form, all numbers countdown to show the number 1984 repeated throughout. The piece was made as a homage to George Orwell’s eponymous dystopian novel, 30 years after his predicted date for the collapse of privacy.

"Please Empty Your Pockets" (2010) is an installation that consists of a conveyor belt with a computerized scanner that records and accumulates everything that passes under its purview. Viewers are invited to place any small item on the conveyor belt, for example, keys, ID cards, wallets, worry beads, condoms, notepads, phones, coins, dolls, credit cards, and other everyday items that might be found in any one’s pockets. Once these objects pass under the scanner, they reappear on the other side of the conveyor belt beside projected objects from the memory of the installation. As a real item is removed from the conveyor belt, it leaves behind a projected image of itself, which is then used to accompany future objects. The piece remembers up to 600,000 objects which are displayed beside new ones that are added to the installation throughout its duration. The piece intends to blend presence and absence, using traditional techniques of augmented reality, such as those described by Adolfo Bioy Casares’ 1940 novel "La Invención de Morel."

"Redundant Assembly" (2015) is a computerized mirror that uses a camera array to compose a live portrait of participants from nine simultaneous perspectives. As a viewer looks at the piece, face recognition algorithms detect his or her face as seen from all cameras, aligning them on the center of the display. The result is an uncanny representation of the subject, unbound from the symmetry and depth perception of binocular vision. When several people are detected simultaneously, a composite portrait of them is made in real-time.