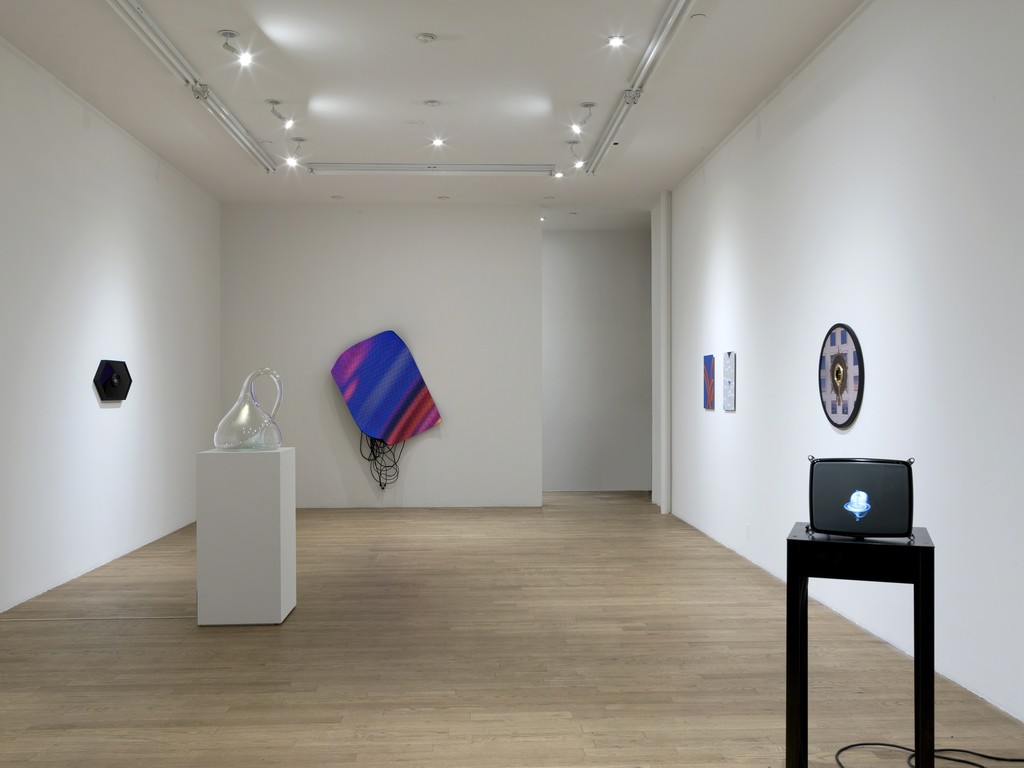 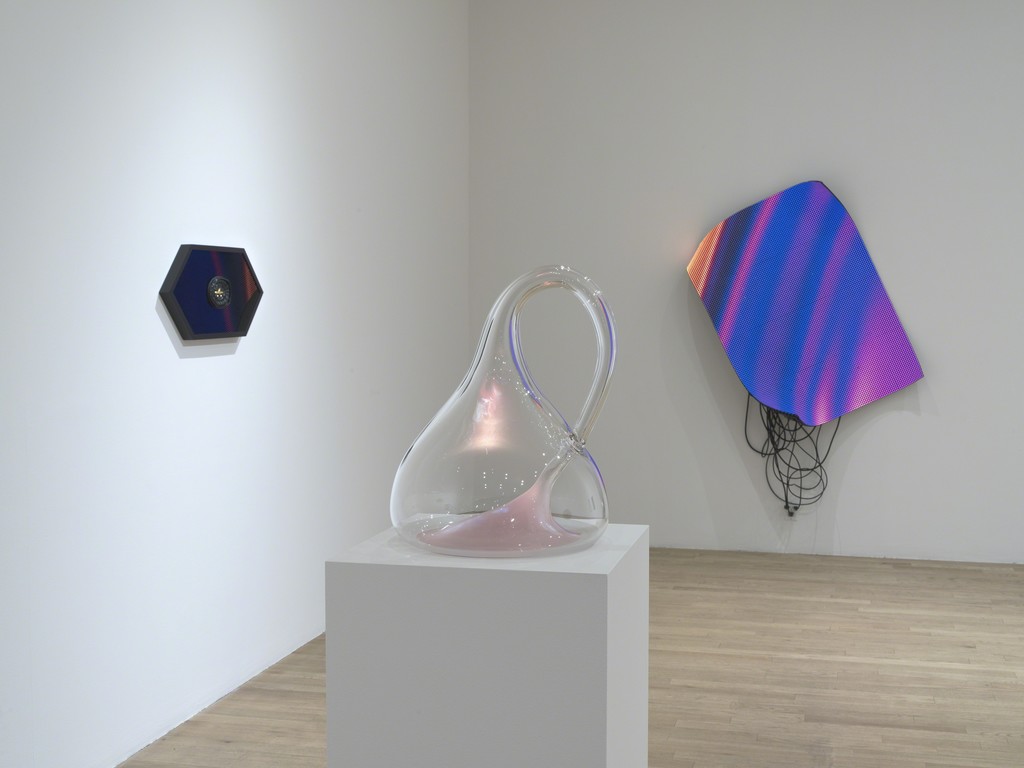 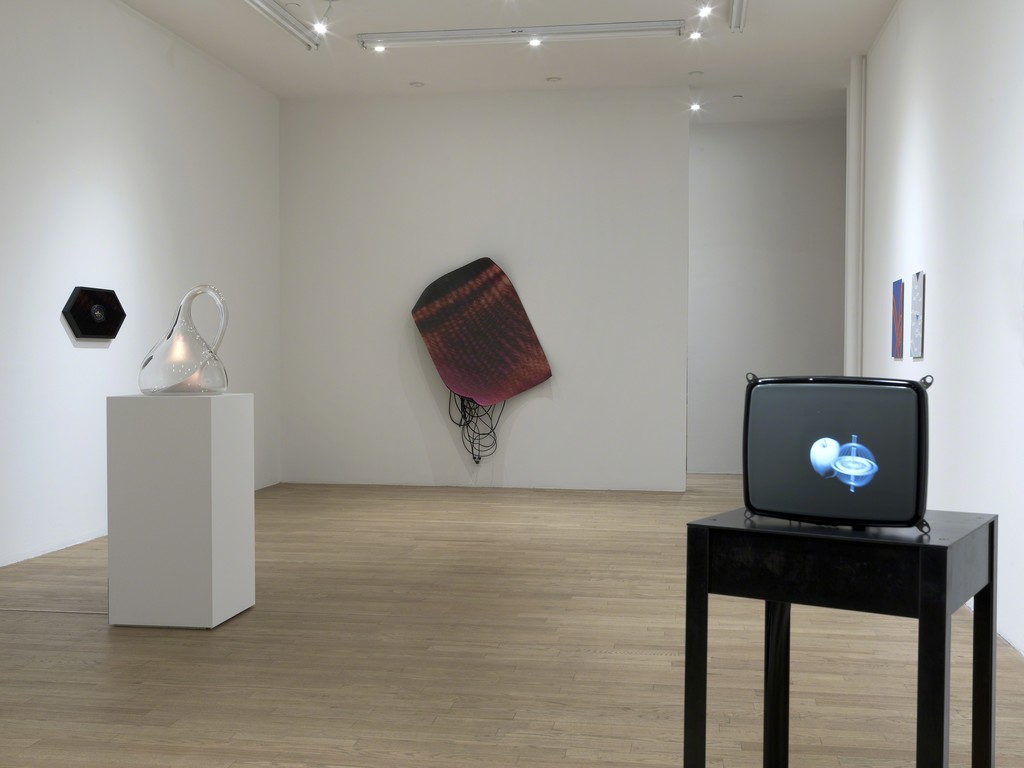 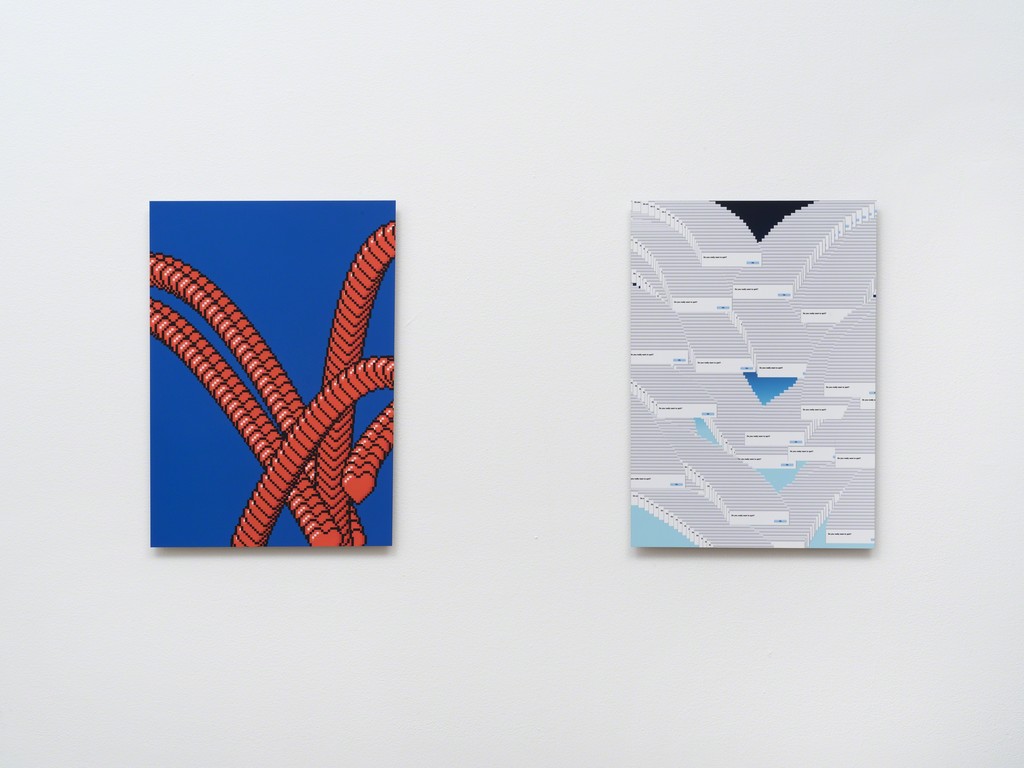 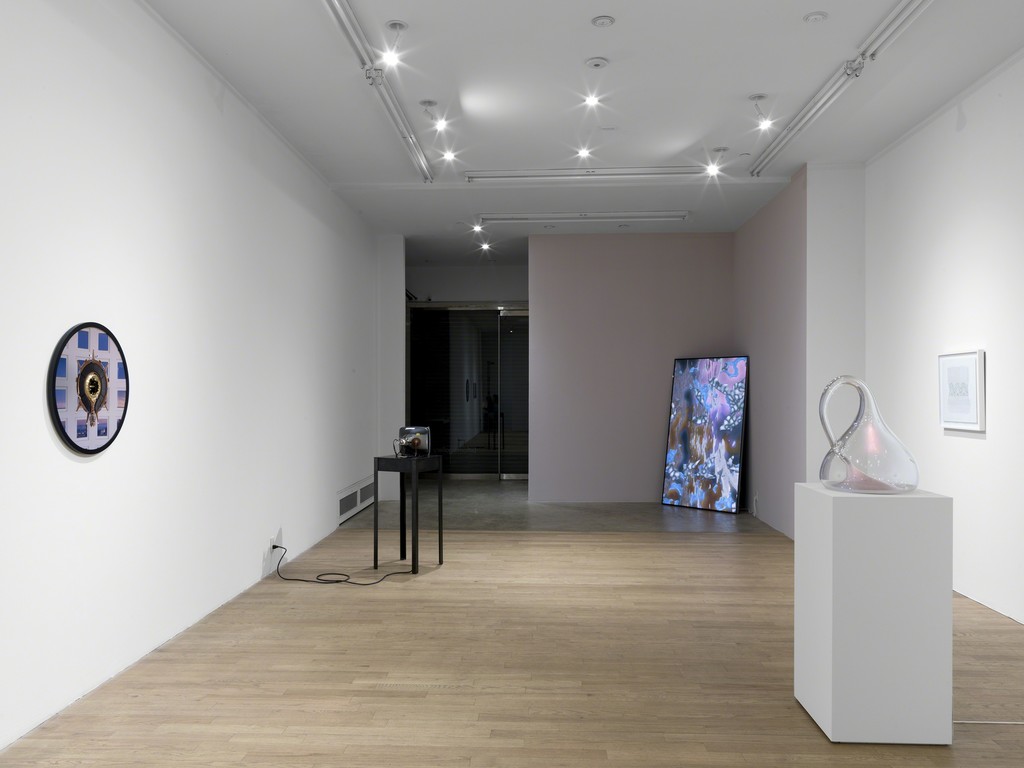 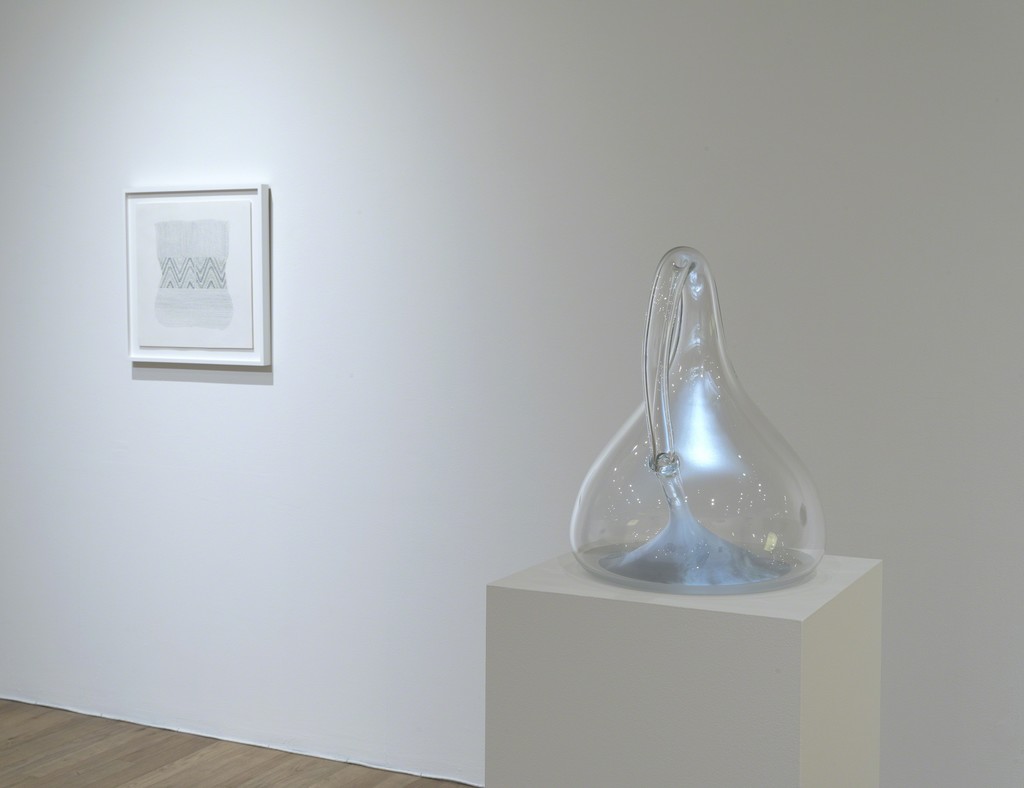 bitforms gallery is pleased to announce a group exhibition highlighting key works from artists participating in the upcoming season. For the first time the gallery will be presenting works by Gary Hill, a foundational figure in video art. The exhibition will also feature new work by Daniel Canogar, Beryl Korot, Sara Ludy, Jonathan Monaghan, and Addie Wagenknecht.

After our successful fifteen-year anniversary season, we are looking forward to another long run of exhibitions critically engaged with experimental media and technology.

Gary Hill’s "Klein Bottle with the Image of Its Own Making (after Robert Morris)" is modeled after the mathematical form in which inside and outside are ambiguous instead being one continuous surface. The artist made a video recording of the bottle being made and projected it “inside” the form, a direct reference to Robert Morris’s "Box with the Sound of Its Own Making" from 1961.

Another work by Hill, "Liminal Object #7" is a part of an ongoing series of black-and-white works utilizing simple computer animation. The images are displayed on a 14-inch monitor that has been removed from its housing and placed on a metal platform. Each work in the series involves two objects that violate each other’s physical and symbolic borders in unpredictable ways. "Liminal Object #7" features an apple and a gyroscope. The apple sits in stillness while the gyroscope moves in, around, and through it in a repetitive interaction, its wobbly axis encircling the apple’s stem.

Daniel Canogar creates three-dimensional installations that conceptualize media as sculpture. After years of research, he has pioneered a technique with flexible LED tiles. This enables him to create screens with a membrane-like quality that can conform to multiple surfaces, objects, and architectures. "Echo" is made using the artist’s signature approach and features an abstract, generative animation that is occasionally disrupted by moiré patterns. These visual interferences are triggered by real-time seismic activity across the globe. The result is an ever-changing unique gestural composition.

For Beryl Korot, threads (whether wool, linen, or magnetic tape) are both metaphor and medium. "Curves" references her seminal multichannel video and textile installation, "Text and Commentary," which places ancient and contemporary technologies in dialog, tracing the origin of the computer to the loom. In this new series of abstract drawings, this exchange is continued through the exploration of the mark of the artist’s hand and that of the machine. A sewing machine is programmed to sew the surface of the paper in pre-designated areas. The texture, color, and shape of the sewn thread contextualizes and converses with the original hand-drawn marks.

Sara Ludy’s "Deep Pond" is the newest animation from the series "Clouds" that pushes the constraints of software defaults to evoke natural phenomena. Through extensive layering of amorphous movement, "Deep Pond" emerges as a cosmic field swimming with artificial lifeforms. Without the use of outside source material, these animations are generated from within their native program as intuitive manifestations. "Clouds" reflects the desire to explore computer systems in order to find a personal connection with machines.

Jonathan Monaghan’s "24k Magic in the Air" distorts the ornate Beaux Arts facade of the St. Regis hotel in New York into a sculptural wall-relief. Unthinkably wealthy warring real estate, rail, and oil barons shaped the history of the iconic hotel, which today rivals competitors like the Waldorf-Astoria and Trump Tower. Monaghan gives its Neo-Baroque exterior a dystopian update with 3D printed acrylate and gold plated brass that speaks to the luxe sham of capitalism.

Evoking dread and uncertainty surrounding wealth, authority, and consumerism, the works in the ongoing series "Police State Condo" appear like advertisements for luxury apartments yet are permeated by an ominous foreboding. Security cameras, TSA checkpoints, and distorted ATM machines seamlessly blend with designer fabrics and penthouse views. Composed of both two-dimensional imagery and 3D printed sculptural reliefs, the works explore the space between the virtual and physical; imagination and reality. "Chase What Matters" depicts a panopticon-like orb floating in front of columns of windows. Its core contains ornate golden spikes that appear to be monstrous teeth in a jet black mouth.

Addie Wagenknecht’s "solitaire and cheat codes" dye sublimation prints nostalgically recollect the aesthetics of early Windows operating systems. Since 1990, Microsoft has included Windows Solitaire in the pre-installed software for the OS and it has since become a symbol of the era. solitaire and cheat codes reminisces on the glitchy sequence of repeated bouncing cards that is displayed after a player wins the classic game. The series introduces the dated visual to a contemporary context by replacing Susan Kare’s iconic cards with items such as donuts, cash, Tesla cars, and more.

Another work by Wagenknecht, "Untitled (Vase No. 3)," is a part of the Liberator vase series made in collaboration with Martin Zangerl and Stefan Hechenberger. The Liberator is a 3D-printable handgun and was the first such printable firearm design made widely available online through the open source firm Defense Distributed. Shortly after their release, the U.S. Department of State demanded they be removed and now the designs are available only through torrent aggregators such as the Pirate Bay. Composed of 3D printed Liberator guns, "Untitled (Vase No. 3)" warps and obfuscates the form of the Liberator, rendering its violent potential into a decorative domestic object and calling to mind the iconic anti-war protest image of the flower in a gun barrel.