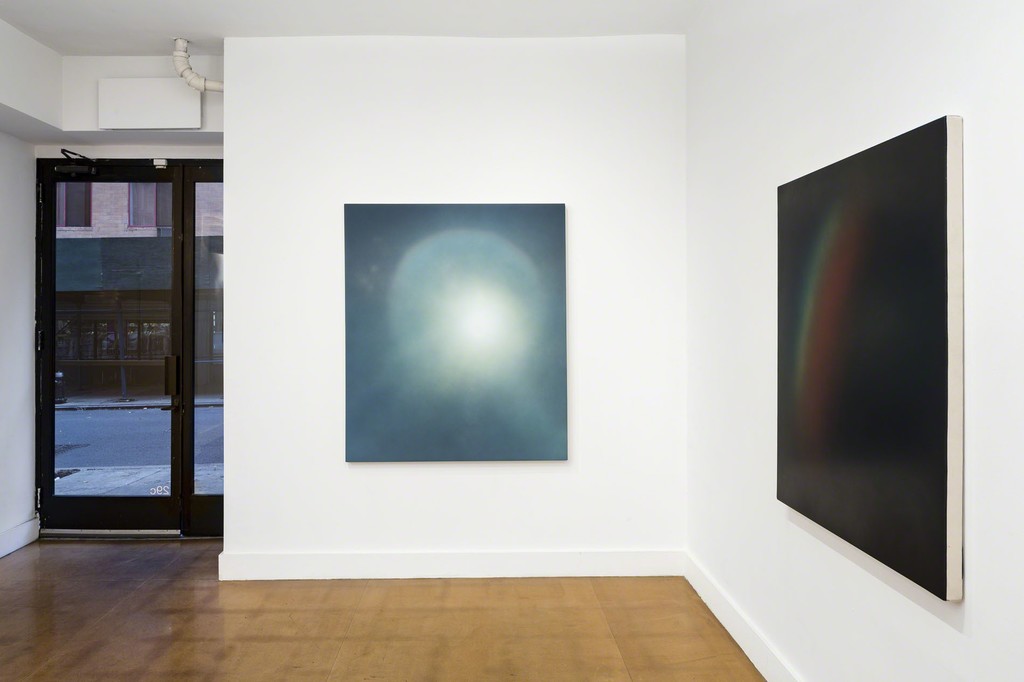 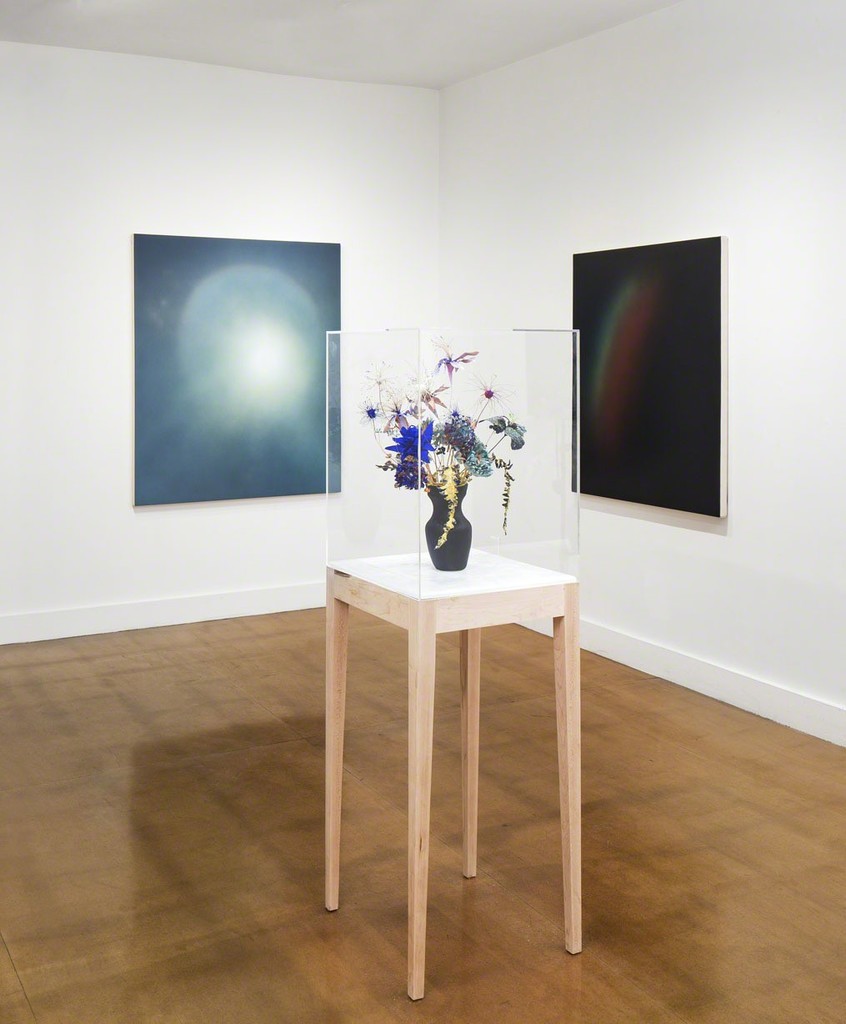 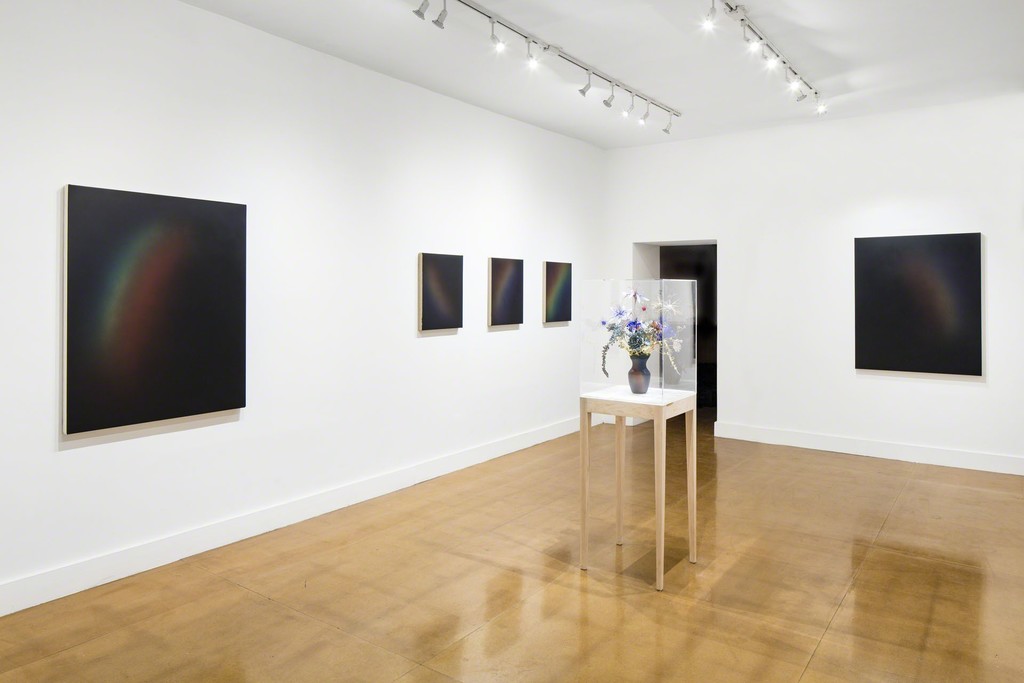 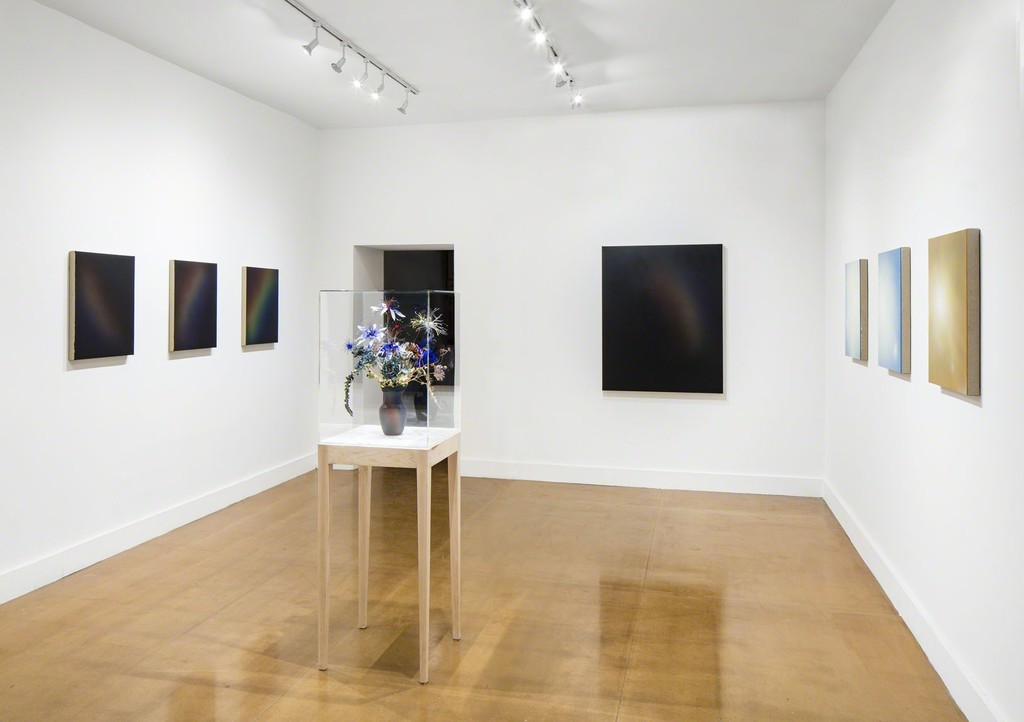 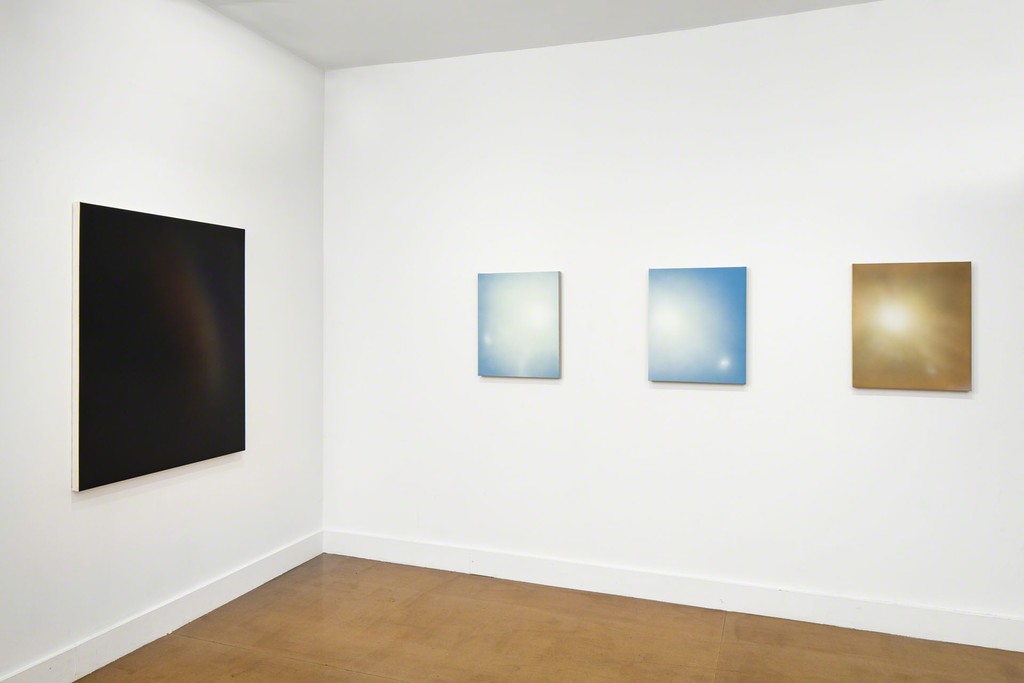 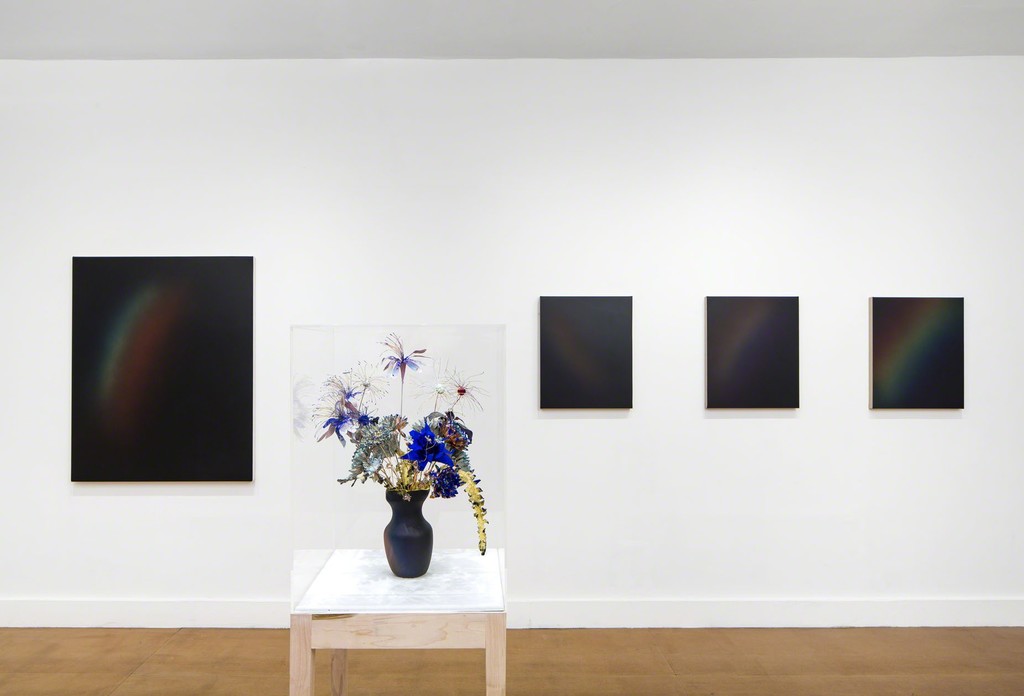 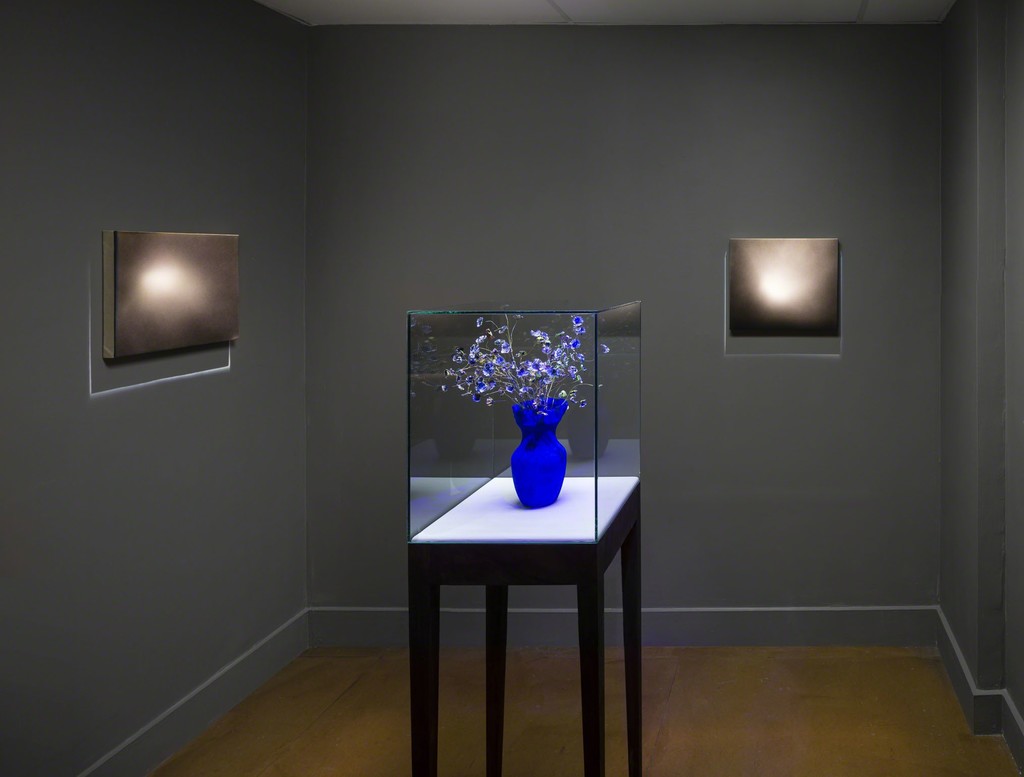 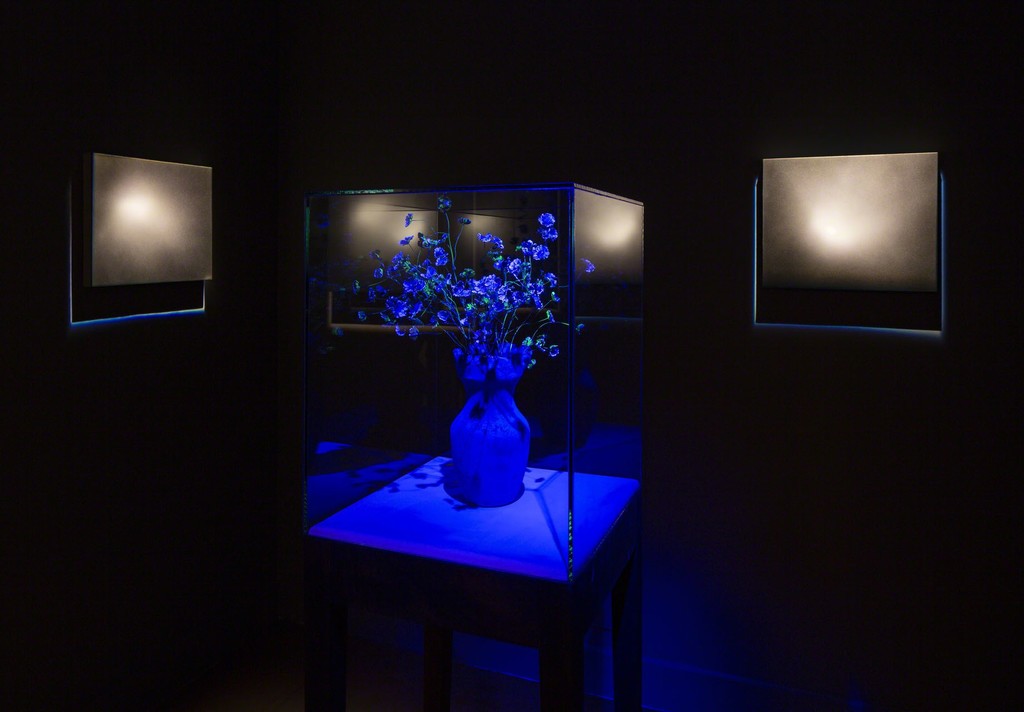 Included in this exhibition are selections of the artist’s work that represent a phenomenology of light through three distinct but related series of paintings and two sculptures. Each represents a piece of a larger ongoing investigation into the intersection of the universal (scientific), cultural, and emotional relationships we build around this transient energy.

Picture-making for Case-Leal is about learning to use alternate methods of thinking and is an investigation into understanding how pictures as objects impact us at a subconscious, emotional level. To this end, he adopts a labor-intensive process developed directly from his performance art practice and various mind and body therapies. Spraying numerous (30-50) thin layers of translucent paint onto linen -- sanding and polishing each layer -- he creates a pristine and subtle surface. This rigorous physical approach diverts his own discursive thinking and encourages alternative modes of problem-solving -- physical thinking that uses his entire body: his stomach, breath, muscle-memory.

Case-Leal’s Black Rainbow paintings are seemingly illuminated manifestations of the visible light spectrum (a rainbow) floating in a deep field of light-absorbent black. He uses only his own anatomical proportions to determine composition and scale.

For his Invisible Light series, Case-Leal bases his paintings on images taken from a specialty camera sensitive to ultraviolet light. These paintings reveal the invisible and offer an experience of the otherwise hidden presence that surrounds us everywhere.

Also included prominently are two sculptures -- both representations of ancient extinct flowers. Our ability to perceive color evolved directly from our ancestor’s relationship to flowering plants and their fruit. Following extensive research into paleobotany the artist has used copper, lead, and porcelain to handcraft his own interpretations of these species of flowers that are no longer existent. They are embellished with paint and dusted with pollen and powered pigments.

First Light delves deeply into the natural and social sciences to uncover an expansive multidisciplinary understanding of our relationship to light. These works are a meditation on the ways that light mediates our relationships to our own physical bodies, each other, and the natural world.

James Case-Leal (b. 1982, Dallas, TX) currently lives in Beacon, NY. He completed his MFA at Columbia University in 2014. He received his BFA from the University of North Texas in 2006. Case-Leal’s early practice included sculptural, photographic, and performance-based work. Recent two-person and group exhibitions include Charles Ross and James Case-Leal at Franklin Parrasch, New York, NY (2015 -- catalogue), Weird Science at Marianne Boesky Gallery, New York, NY (2015), and Gatherings at Fergus McCaffrey Gallery, New York, NY (2015). In 2011 he was granted Artist-in-Residence Fellowships from both the New York Foundation for the Arts and the Center for Book Arts.