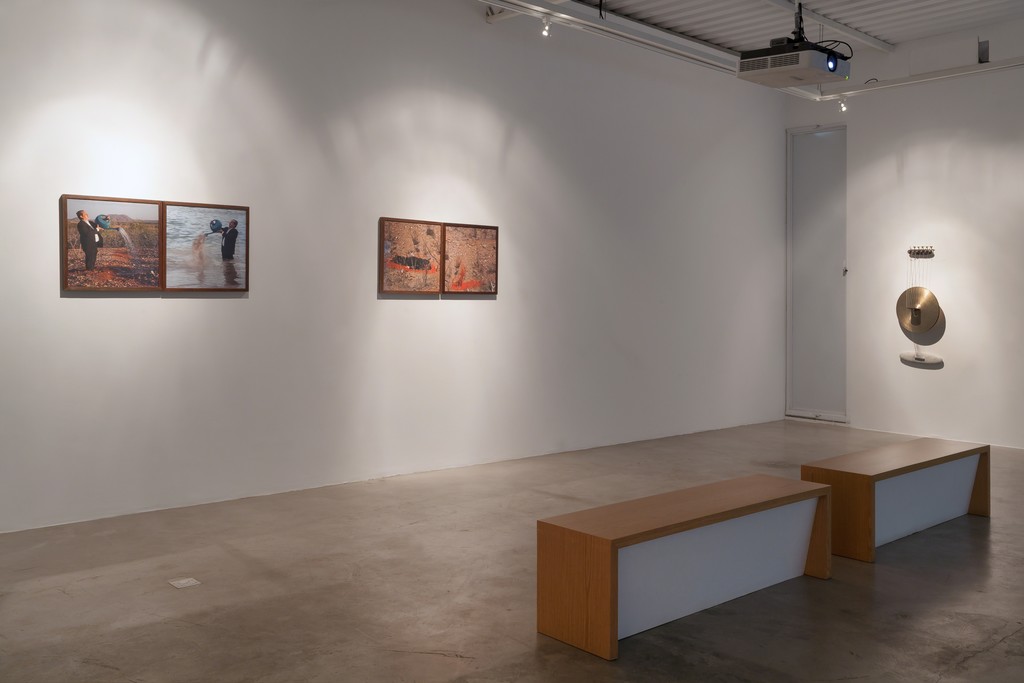 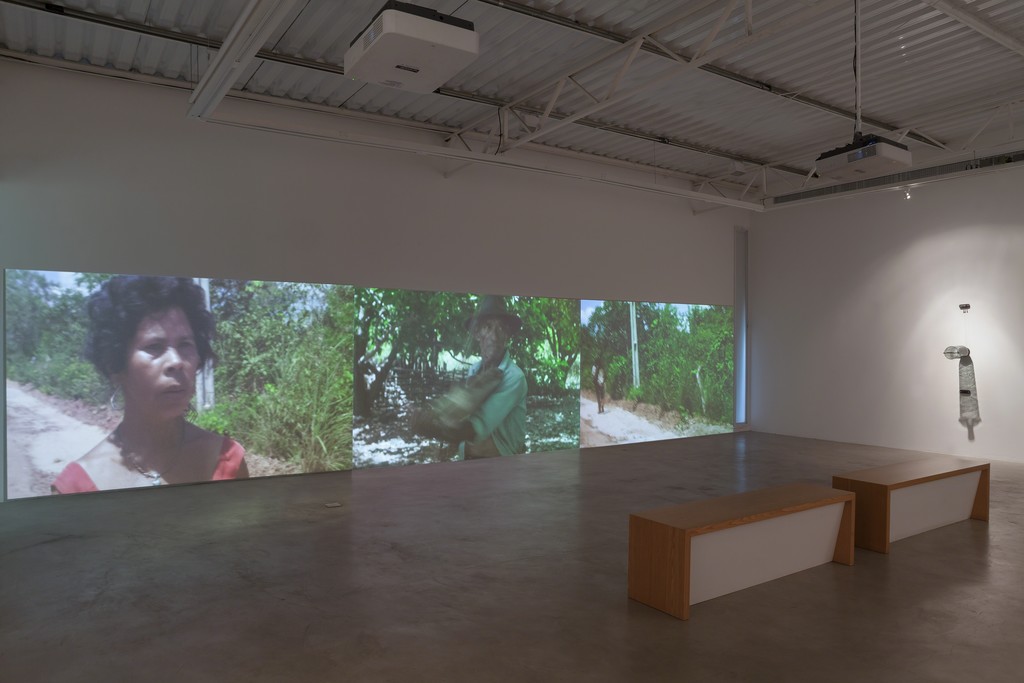 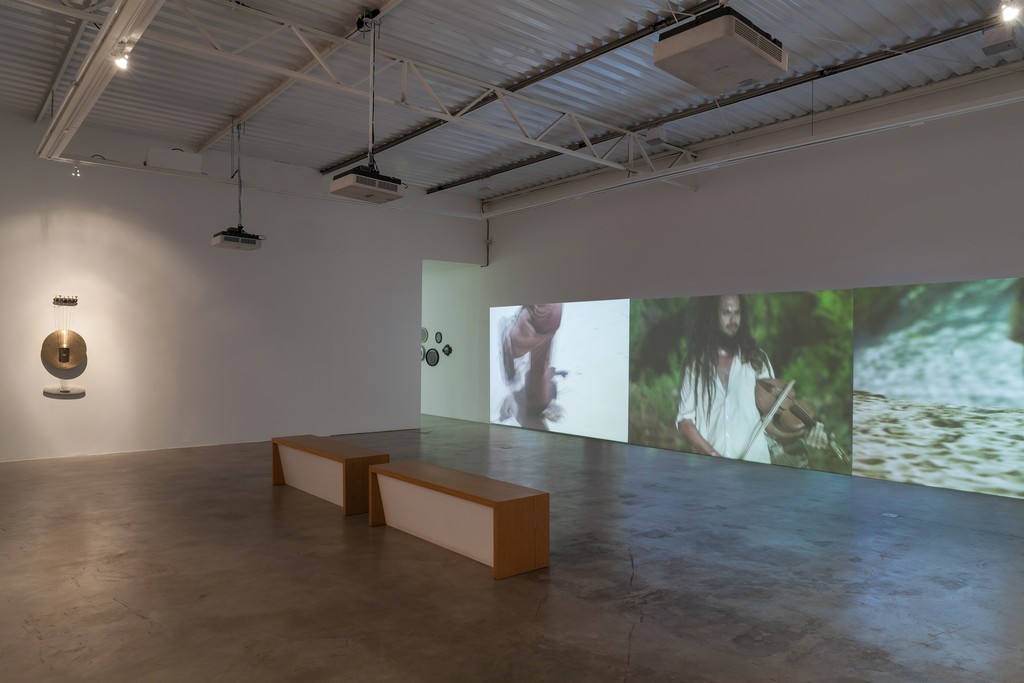 Opening on October 17, Blau Projects presents the exhibition Sky of Led, by the Bahia-born artist Caetano Dias. With 12 original works made especially for the exhibition, the artist presents his most recent production, with video-installations, photographs and installations with stringed instruments.

One of the most consistent artists of his generation, having exhibited in several places around the world, bahiano-born Caetano Dias presents his recent production inspired in backwoods and especially in his incursions in Canudos, an inner city from Bahia, where one of the bloodiest episodes in Brazilian history happened. Between 1896 and 1897, under the epic figure of Antonio Conselheiro, the so-called Canudos War saw a massacre that left thousands of dead people.

In Adeus terra, Caetano presents a diptych made of a register of a performance. ‘Actually, the performance had only one public, which was the photographic camera’, the artist says. The ritualistic moment happens on Morro da Favela, a place where many battles happened at Canudos State Park. ‘I cleaned the floor with a fish knife, poured 10 kilos of urucum on the earth and stayed there, laying for 20 minutes under the sun’ Caetano remembers. ‘This work speaks of wars, of deaths, of losses and of all these political questions that permeate our life’, he defines.

The saying attributed to Antonio Conselheiro, ‘the backwoods will become sea, the sea will become backwoods’, is the inspiration for the work Entre terras e águas, photographed by the artist. ‘I went to Porto da Barra, place where Bahia was founded, and threw water collected at Canudos. And I did the same in Canudos. I took water from Bahia and threw it in the ground’, he says. ‘Deep inside, Antonio Conselheiro was talking about what we are living now, about climate issues, water scarcity that is more contemporary than ever’, says Caetano.

Céu de Chumbo, the work that gives the exhibition its name, was photographed by Caetano in 360 degrees the point of view of a house that was built to hold the engineers responsible for building Cocorobó dam. ‘This dam covered the old city of Canudos’, says Caetano. Today, the house is used as accommodation to those who visit the region, which was already known as Belomonte.

In Cruzeiro do sul, the artist made a diptych, at Vale da Morte (death valley), where thousands of people are buried because of the region’s battles. In theses photographs, Catano proposes a new reading of the violence, with a drawing of the South Cruise constellation (a symbol of the Brazilian flag) punctured with lead in the landscape’s photograph. ‘The violence of the past is constantly updating itself’, says the artist.

The artist also built musical string instruments to bring to the exhibition space. They are three works: Mulatos I, Mulatos II and Mulatos III. ‘What supports these instruments is the wall’, he says. In one of these works, the artist appropriates a military map of the invasion of Canudos published in the book Os sertões, by Euclides da Cunha, joining one of the instrument’s strings to a bullet from the war time, that he found. ‘This is an instrument of only one string, which is nonetheless a metaphor of war’, the artist says.

In the exhibition there are also the works Sob o céu de 1897, Retrato de família, Tempo de chumbo, all from 2015, as well as the video Rabeca, which was already shown in movie theater format but was updated with new scenes made in Canudos and exhibited for the first time as video-installation in three large screens in the gallery.

‘Parallel to the artistic and personal investigation, I think that the history of Canudos is a story that belongs to every Brazilian. It is one of the big scars of Brazil. It is the massacre of the State against the people that is updated all the time. In the manifestations of 2013. In the massacres of São Paulo’, says the artist. Caetano has a poetic work that transcends time and space, bringing up his ancestry together with the history of Brazil. The beauty of his work also come from the rawness of the conflict. In this accusation show, the artist revisits the country’s trajectory updating permanent issues in Brazilian’s culture and society.

The artist, born in Feira de Santana, Bahia, in 1959, works with all the artistic techniques, like video, painting, three-dimensional works, multimedia installations and digital photography. He has exhibited in Brazil, Venezuela, Ecuador, Spain, Cuba, United States and Canada. He has taken part in biennals in Mercosul, Valencia, Buenos Aires and Paris. He had works in the collections Assis Chateaubriand, MAM-BA, MAM-RJ and Museu Berardo, in Lisbon. He was awarded at 16º Festival de Arte Contemporânea Videobrasil, with residency in Le Fresnoy, in France. He took part in the 29th edition of Panorama de Arte Brasileira, from MAM-SP. His last individual exhibition was in São Paulo, in 2010.

Service
Céu de Chumbo by Caetano Dias
From October 17 to November 19
Working hours: tuesday to saturday, from 11AM to 7PM
Free entry