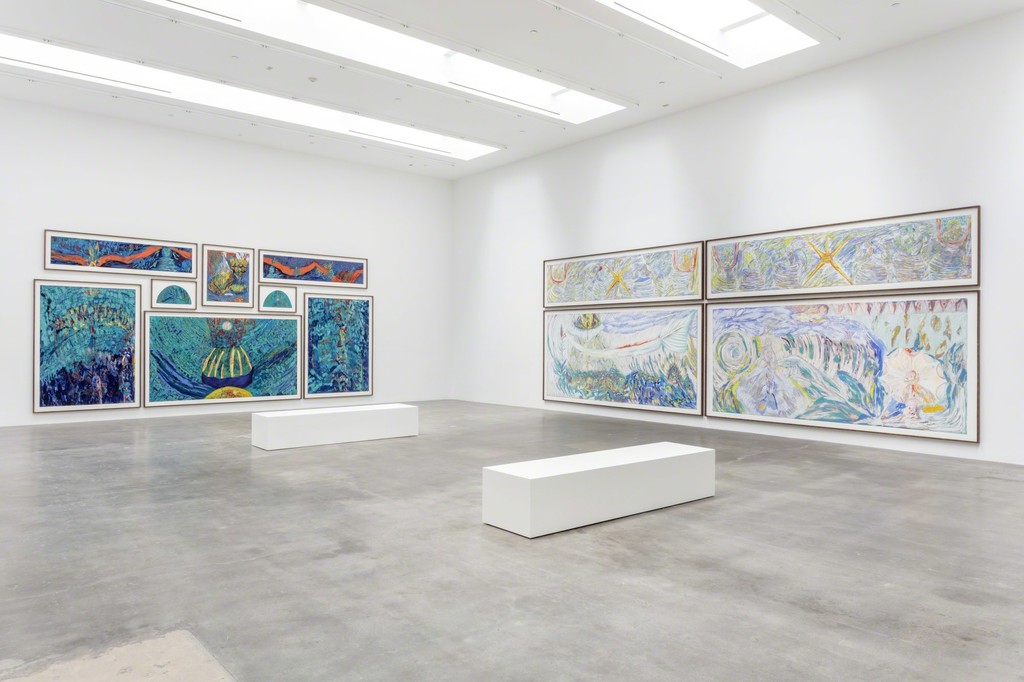 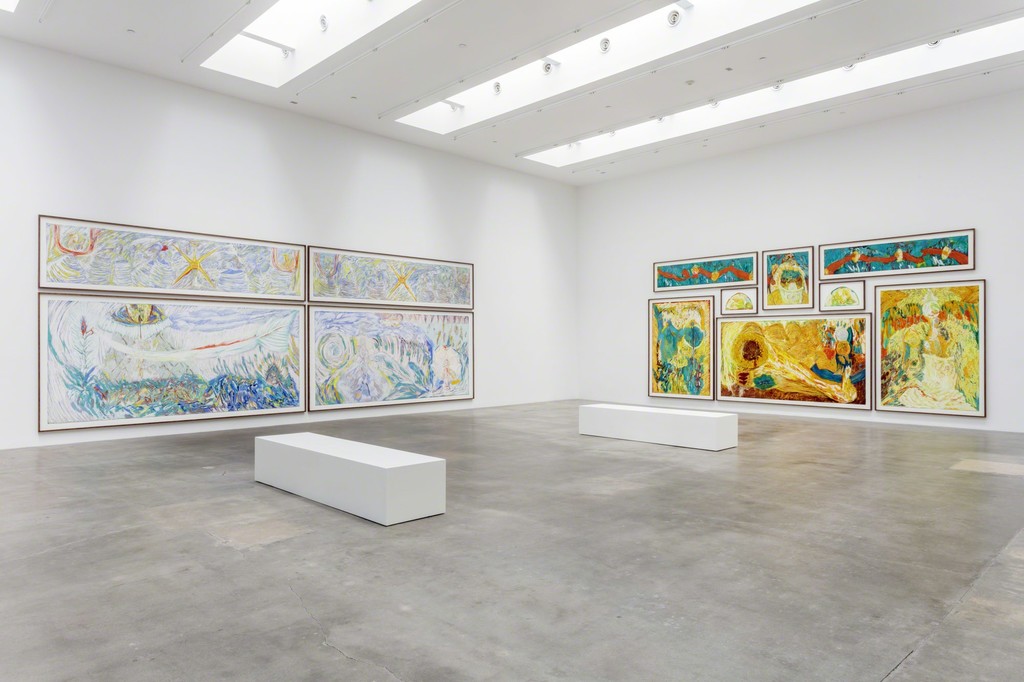 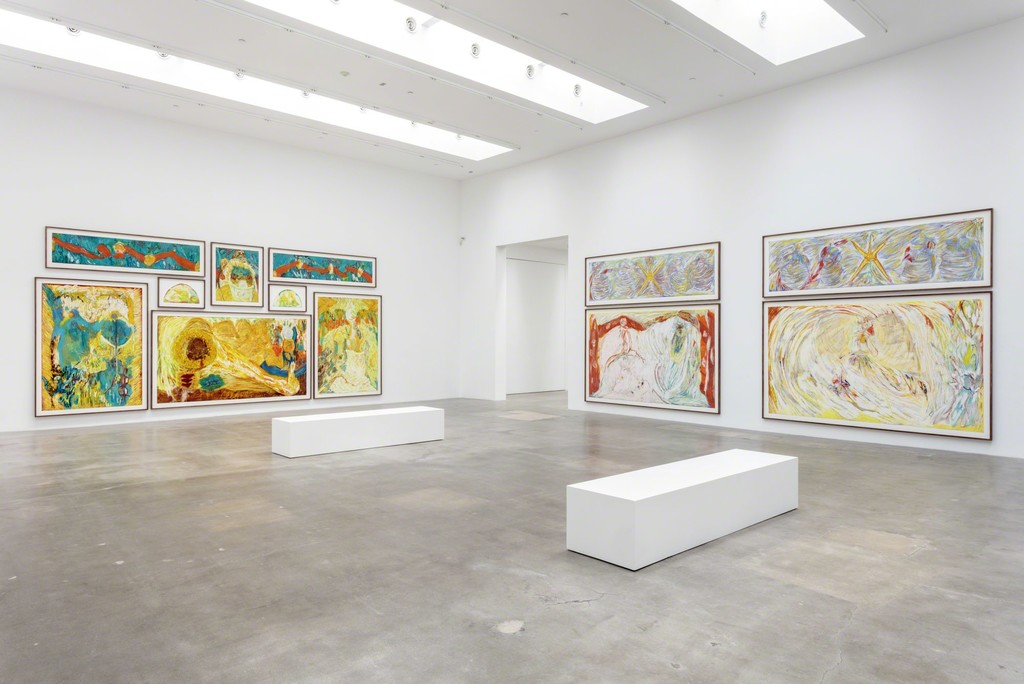 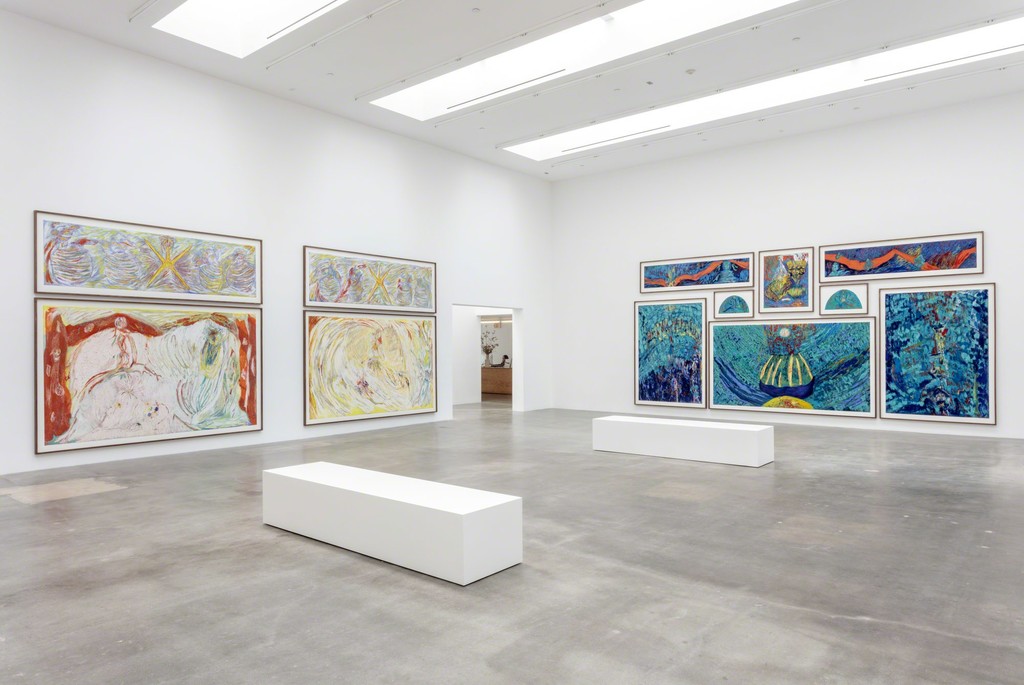 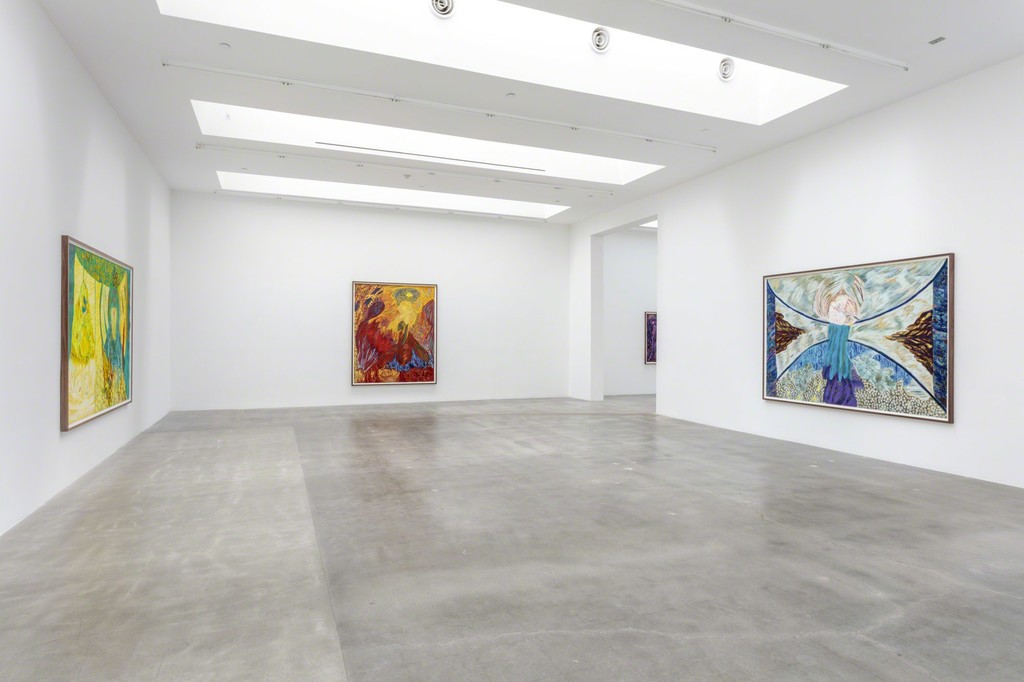 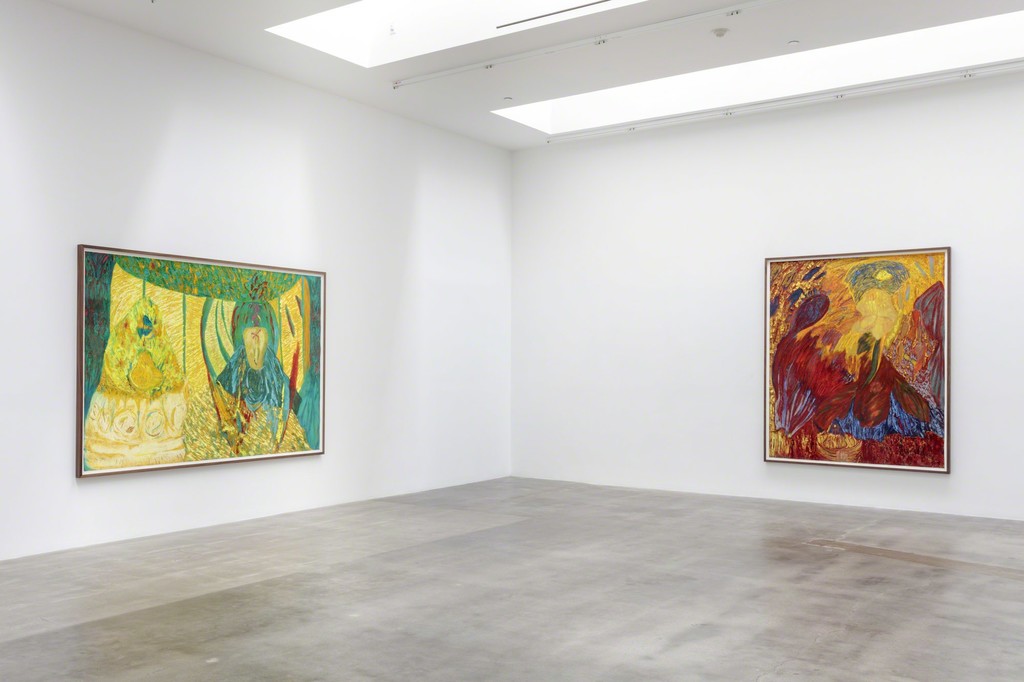 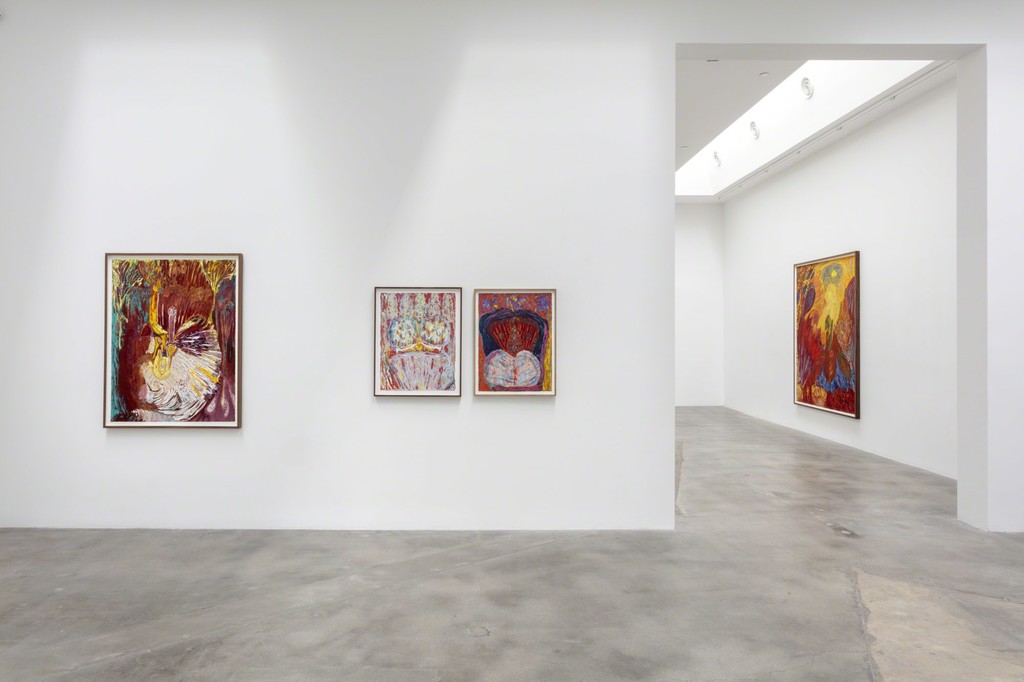 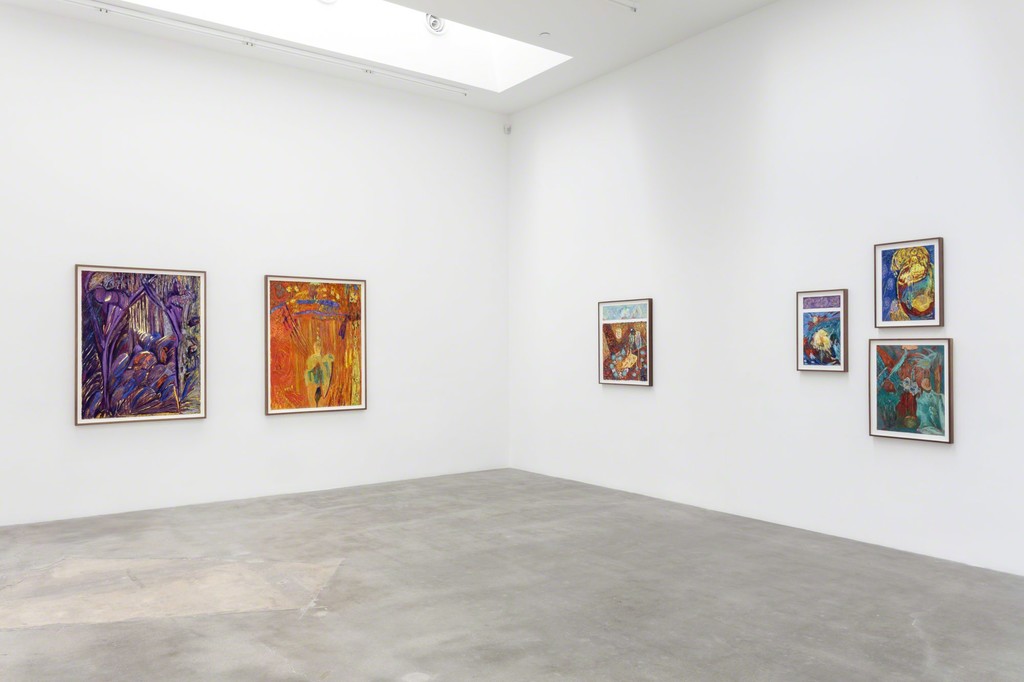 Blum & Poe is pleased to present the gallery’s first solo exhibition with Los Angeles-based artist Mimi Lauter. Entitled Sensus Oxynation, this presentation includes a twenty-four-part installation that functions as the interior of a chapel—each wall a grouping of lush, highly chromatic oil and soft-pastel works on paper. These arrangements of layered colors and swirling textures assemble abstracted narratives drawn from subconscious memory, literature, sociopolitical surroundings, and classical mythology. The results are expansive fields of unfurled myth-making.

Using the concept “prison of my senses,” a phrase that came to Lauter in a dream and which inspired the title of the exhibition, the chapel addresses a secular relationship to spirituality in painting. A moonrise, a sunrise, and an apocalyptic flood are all depicted in panels in the main gallery, rousing universal allegories that function as would religious parables within the context of a chapel. Each composition begins with a coating of pastel that is scraped down to create a smooth and viscous surface that will hold the weight and structure of the additional layers. Lauter continuously explores the tension between drawing and painting, and even sculpture—seen in the meticulous accumulation of marks that yield complex textures and “slow” the work from the pace of a painting to that of a drawing. These repetitive gestures and tactile etchings highlight Lauter’s ability to transcend language and explore the interpretation of narrative through form, abstraction, color and, as Kandinsky would say, “the untouchable.”

In the adjacent galleries, Lauter’s Devotional Landscape and Devotional Flower series engage the same vibrant colors which heighten and intensify both the image and light through the use of pastels, a medium comprised of almost pure pigment. Unlike traditional devotional paintings or sculptures which are used to aid in religious worship, Lauter proposes the belief in and devotion to the painting itself. Imagery of flowers, vases, the four elements, and other instances of iconography are meant to conjure the history of painting—a number of works point to the tradition of still lifes, which oftentimes implicates interior and psychological spaces. Lauter is informed and influenced by artists such as Odilon Redon, Jean-Édouard Vuillard, Pierre Bonnard as well as other members of the Nabis and Post-Impressionists, who impress upon the aesthetic foundation of her work. Each composition encourages the viewer to piece together the conscious and subconscious and to explore the real and the ethereal. Intricately carved surfaces contrast the intense use of light and color, offering distinct entry points to interpret or translate forms. As a result, the narrative structures in Lauter’s work are often grand and universal, yet also deeply personal.