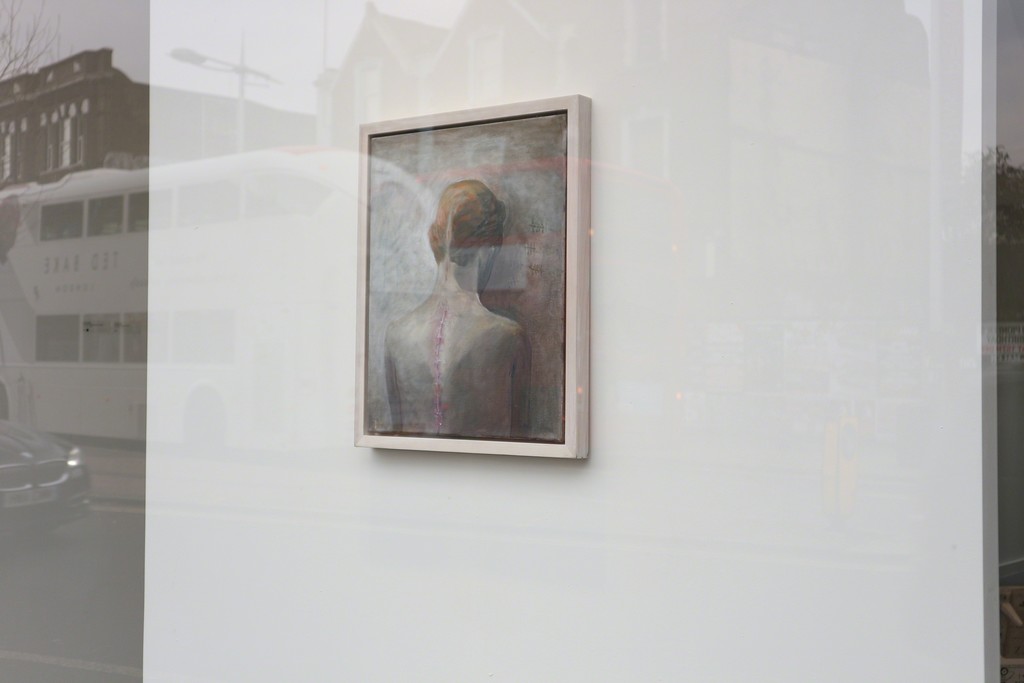 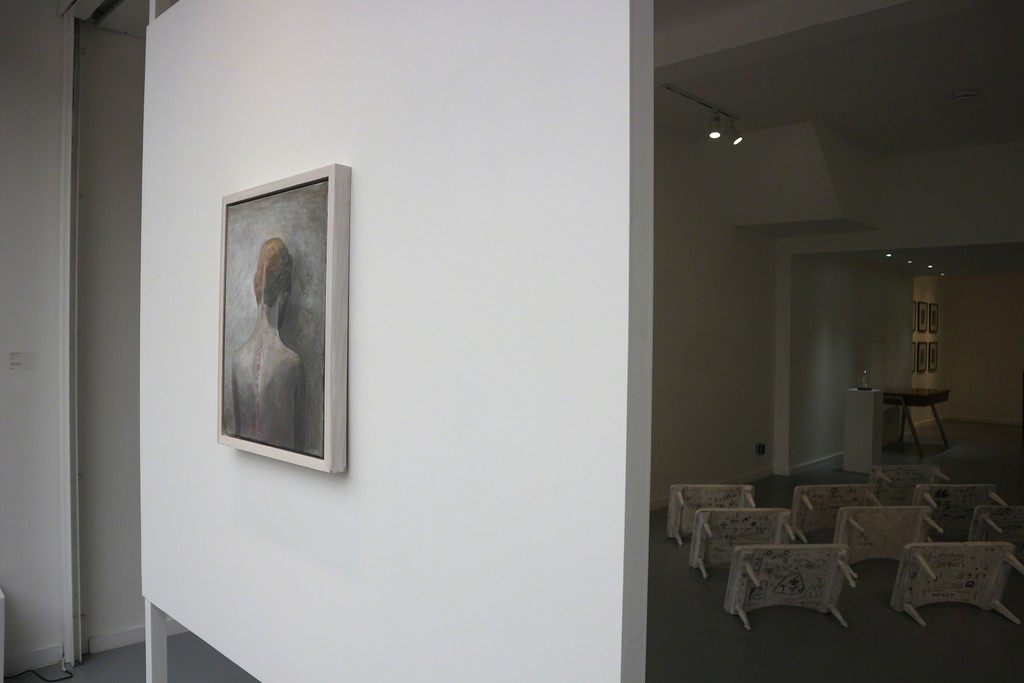 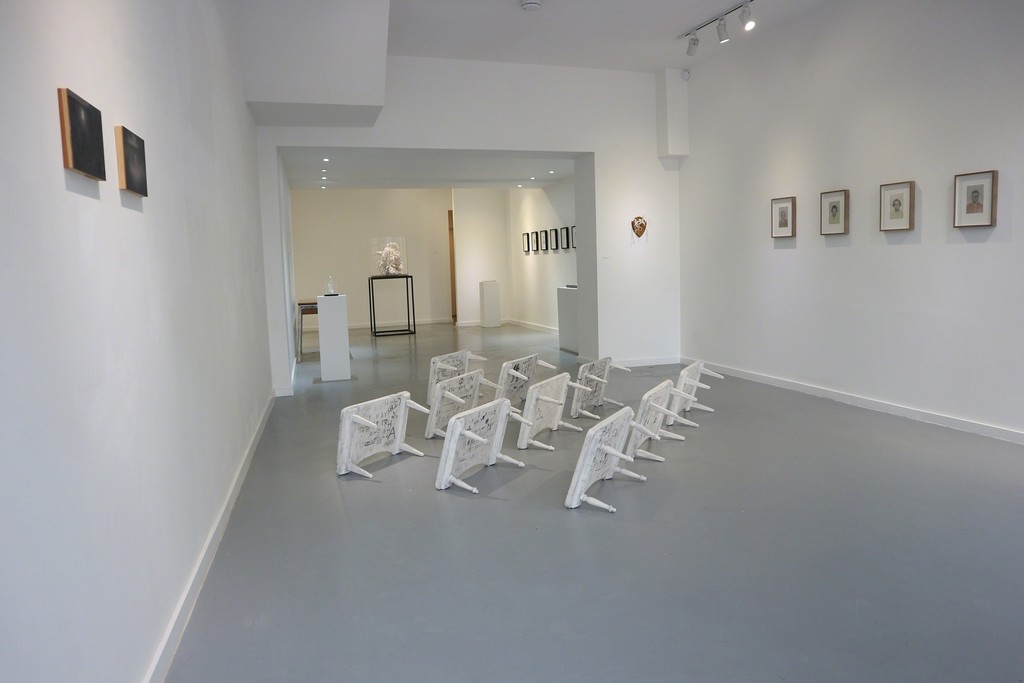 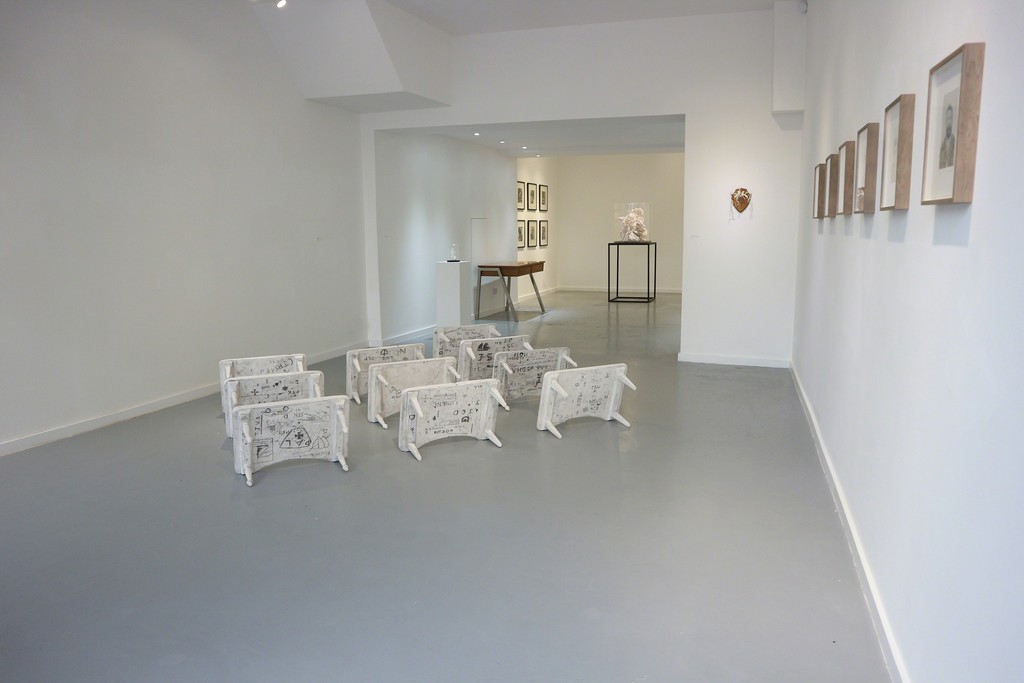 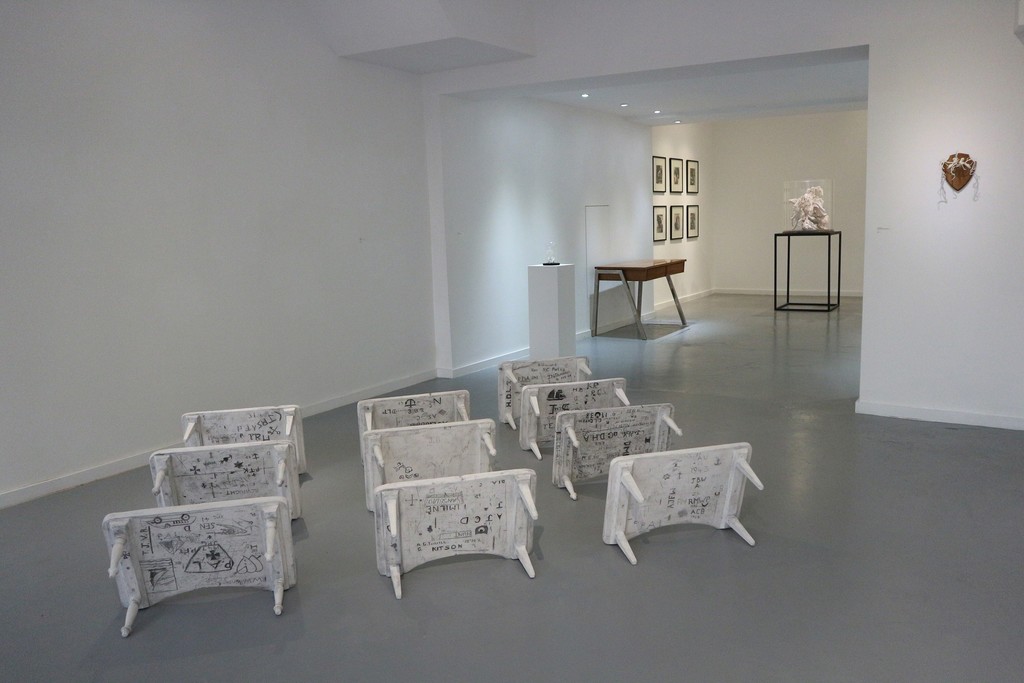 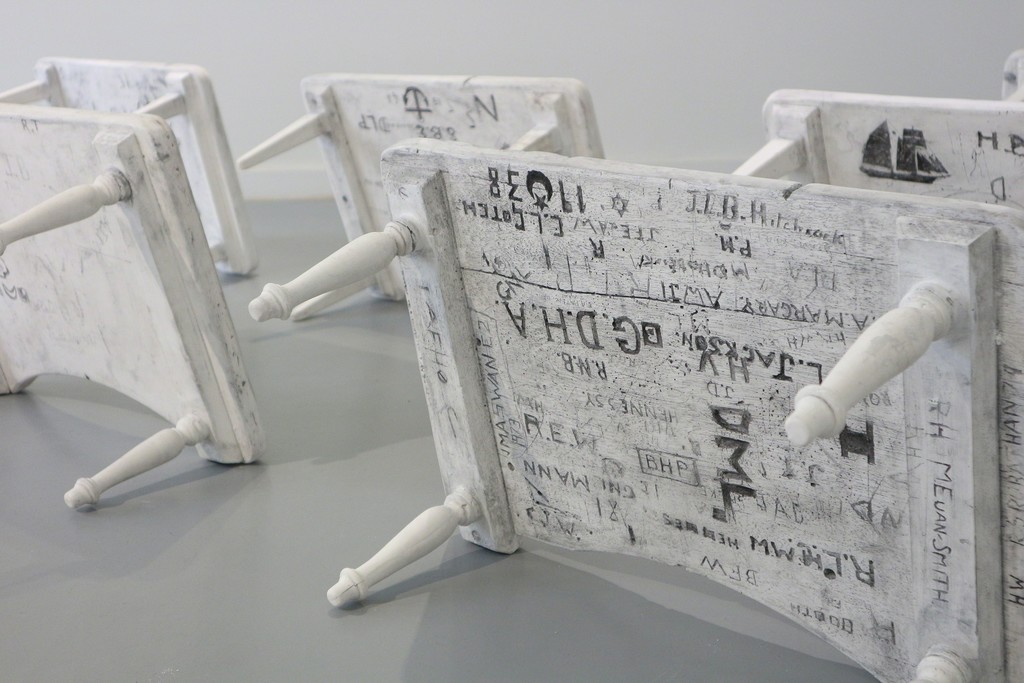 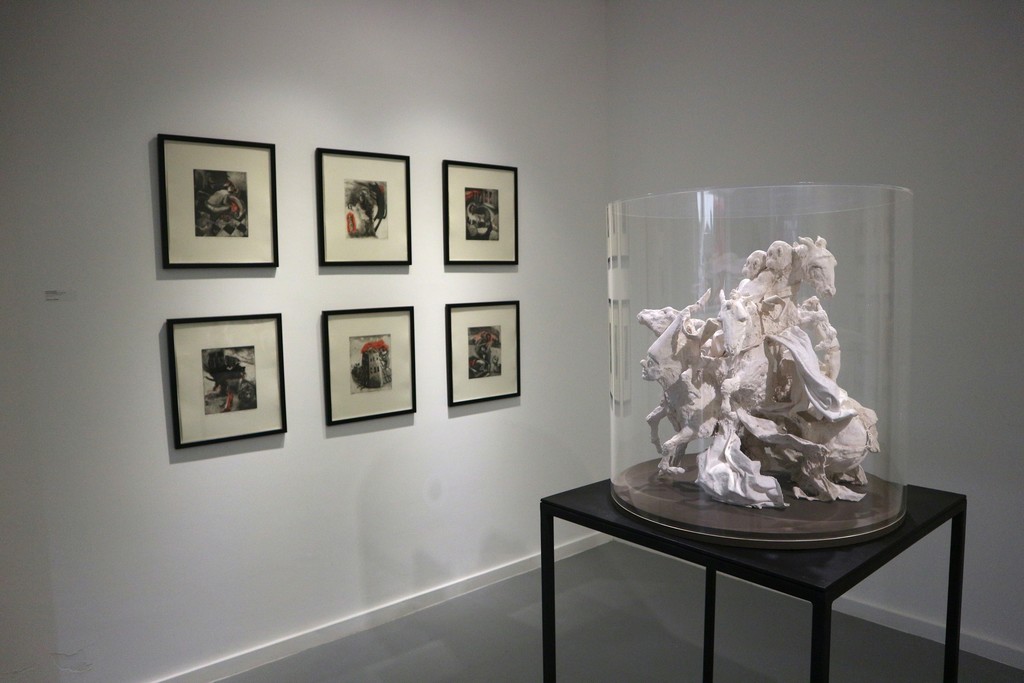 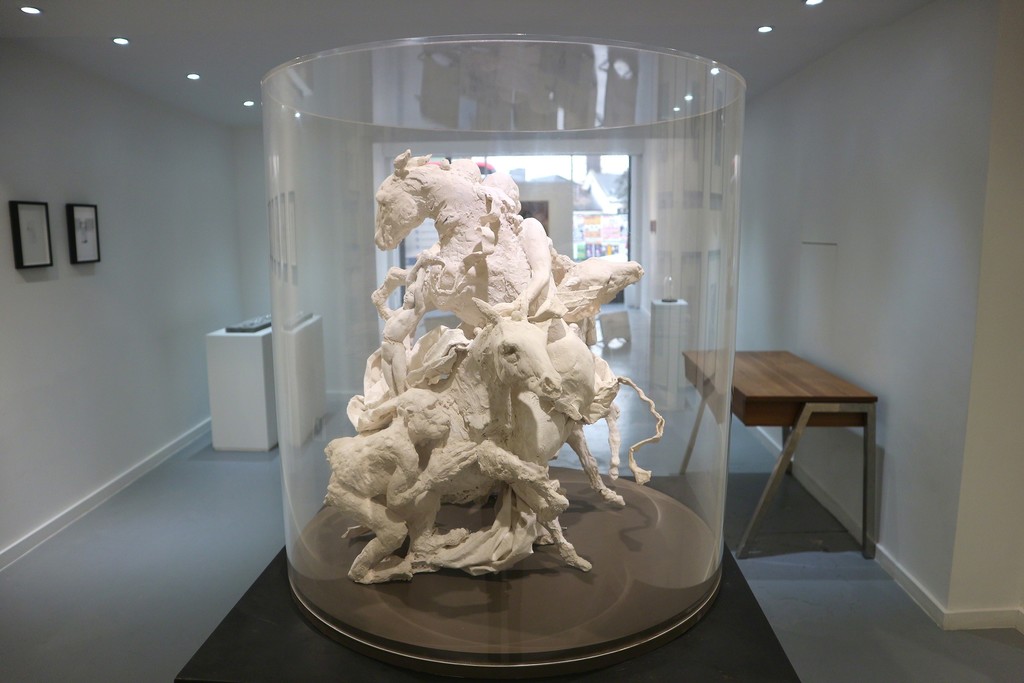 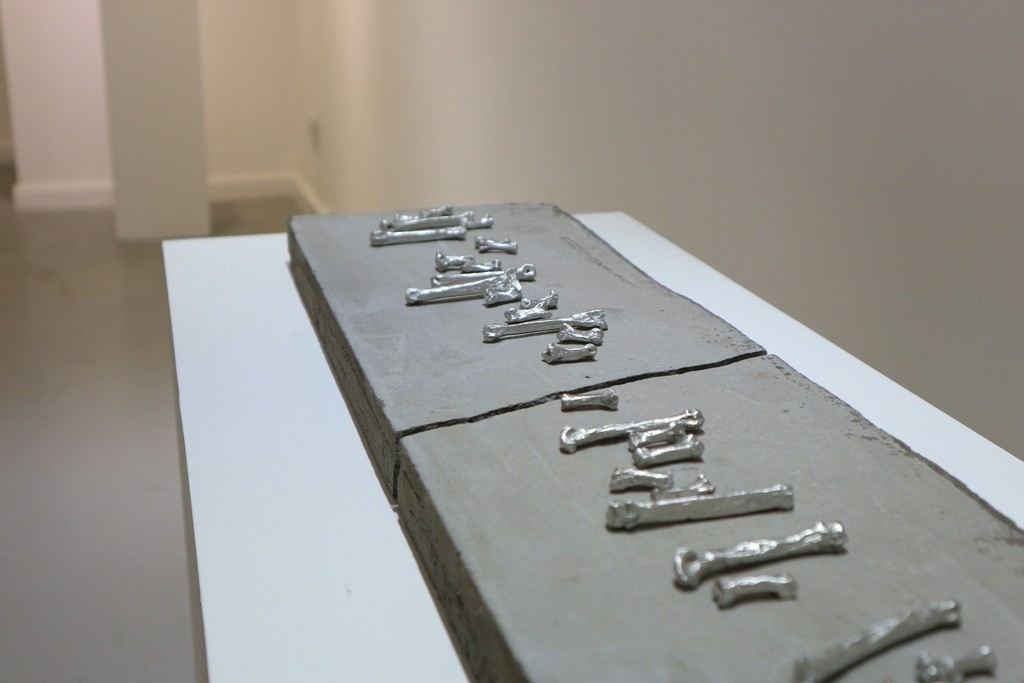 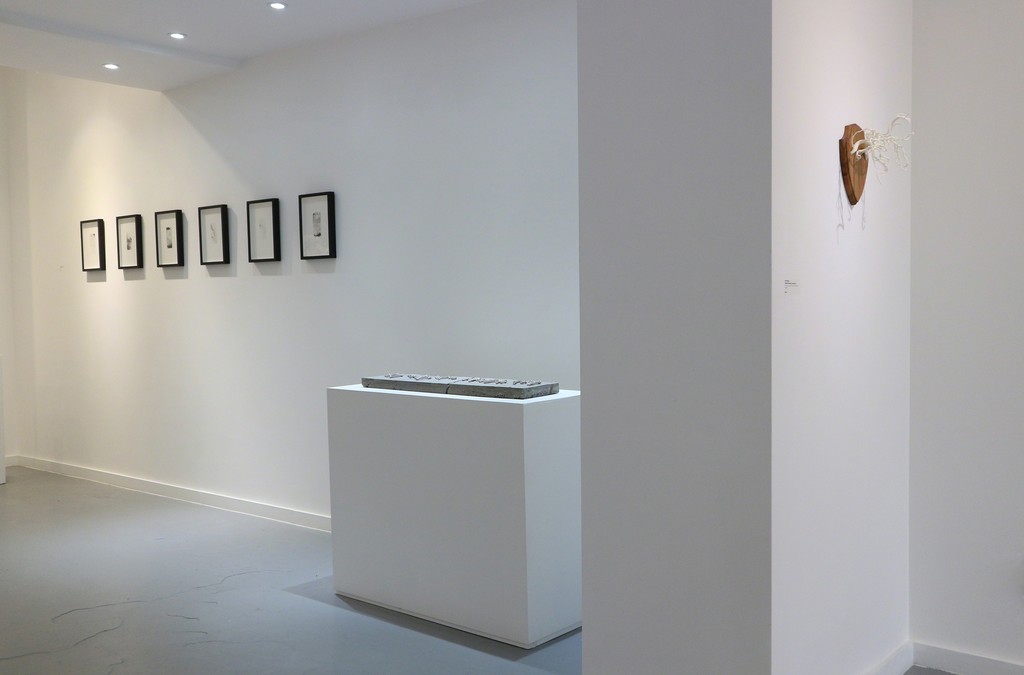 As The Crow Flies embraces a contemplation of the struggles often hidden behind a facade. From the powerful portraits of those affected by global conflict to the symbols of confinement caused by physical and mental illness, the artists each use mark-making as a tool to share their own experiences or as a means of coming to terms with the socio-political turmoil that surrounds us.

Immortalising these journeys in bronze, paint, plaster and print, the selected artworks expose the fragility of health, happiness and security. The timely brush strokes and accidental marks act as a contemplation on life’s twists and turns in a journey that may or may not resemble the flight of the crow.

Sarah Ball’s practice relies on the gathering of found source material, from newspaper cuttings, archival photographs and historical documentation, including criminal ‘mug shot’ archives. She selects subjects with, and without, known narratives. From these images, Ball paints intricate portraits that re-establish the imagined life of the often anonymous, unknowing sitter. Ball was born in Yorkshire, England and currently lives and works in west Cornwall. She studied at Newport Art College in the early 80s, followed by a MFA at Bath Spa University from 2003 - 2005. She has exhibited widely and Internationally. Her work has been shown at the Threadneedle Prize, The Royal Academy, Somerset House and The V&A Museum. In 2016 Ball had a solo show at The House of St Barnabas, Soho Square and her work was shown alongside John Currin, Paul McCarthy, Juan Fontanive and Celia Paul in Dallas, USA as a part of Art for Aids TWO x TWO charity auction.

Beth Carter is a figurative sculpture whose inspiration comes from a number of recurring themes; playfulness and innocence, metamorphosis, vulnerability and grief. The images she uses are triggered by books photography, poetry, memory and a dream world which provides a never ending library of images and imagined characters, which she can bring to life through her drawing or sculpture. Her work creates an allegorical world, often by integrating the human figure with animal form. Carter received a BFA at Sunderland University in 1995, followed by first prize in the Northern Graduate Show at the Royal College of Art, London in the same year. Afterwards she travelled to New Zealand, Mexico, Gambia, Kenya and Tanzania to further explore the precedents for this genre of sculpture. She has exhibited throughout the UK and in the US, Asia and Europe.

Dave Farnham challenges traditional approaches to figurative mark making and sculpture. Amalgamating art, medical technologies and new modes of printing, he captures the internal makeup of his subject and replicate individual physiology. In capturing the unseen, internal physiology of the sitter, he exposes the ultimate fragility of the subject, creating an allegorical representation of life and it’s delicate nature. Farnham lives and works in London. He completed his MA in Fine Art Practice and Theory at Middlesex University in 2003. He was selected as a finalist in the Jerwood Drawing Prize, London in 2011 and the Wellcome Image Awards in 2015. He has exhibited throughout the UK, Europe and in the USA at venues including Jerwood Space, London, House of St Barnabas, London and at Stockholm Art Fair, Sweden.

Inspired by encounters between forensic science and the domestic environment, Bea Haines explores our relationship with everyday matter and the insight this gives into human desire, fear and mortality. Materials such as lime scale, human gallstones and discarded mattresses are re-appropriated, even raised to the status of relics despite their common perception as banal or grotesque. Haines studied BA Illustration with Animation at the Manchester School of Art and an MA Printmaking at the Royal College of Art. She was a fellow in Printmaking at the Royal Academy between 2012 - 2016, where she recently exhibited in the 250th Summer Exhibition. She has exhibited widely throughout the UK and was winner of the RBS Sculpture Award in 2014 and the Anthology Art Prize in 2015.

Marcelle Hanselaar looks for ways to express those illusive questions of who and what we are when the mask is off, and how we appear when the mask is on. The shock effect of her work lies in the contrast of combining her outspoken subject matter with the conventional medium of oil painting or etching. Both her paintings and her prints display her delight and fascination with theatrical illusions and although often peppered with a biting sense of humor, the works reveals her own vibrant understanding of human nature, in all its animosity and fragility. Born in Rotterdam, the Netherlands and growing up in the formal atmosphere of a protestant, postwar country, proved a profound source of inspiration for the recurring subject matter in Hanselaar’s work; namely the fierce and sometimes troubled cohabitation with those raw desires, secret fantasies and uncultivated instincts and our functioning in a civil society. She studied at the Royal Academy of Arts in The Hague 1962-4 and has lived in London since the early 80s. Her work can be found in numerous public collections including The British Museum and V&A, London and The Metropolitan Museum of Art, New York.

Sam Hodge works with painting and printmaking to investigate our tangled and shifting relationship with matter. Materials transform, with new forms and complex patterns emerging from simple physical processes such as erosion, compression, fracture and flow. She is interested in how we respond to instability and chance in our metamorphosing material world and try to make sense of it, making collections that give value to the selected and connections that imbue the ambiguous with meaning. The objects we make fall apart. They are transformed by physical processes, obscuring their original function and making more apparent their similarity to biological and geological forms. Hodge collects specimens of this (un)natural history: things abandoned, eroded, smashed or squashed flat and transforms them further using the etching and pressing processes of print, drawing visual connections with natural history collections and illustrations. Born in Kent, she completed a BA in Natural Sciences at Cambridge University in 1984, and a Painting Conservation Post Graduate Diploma at The Courtauld Institute of Art, London in 1988. She was shortlisted for the Griffin Painting Prize in 2015 and the Creekside Open Prize in 2015. She lives and works in London.

David Kowalski is a self-trained painter based in Gronau, Germany, who describes painting as 'a quest for simplicity and an active form of wondering.’ His small oil paintings on panel resist the 2D formalities; delicate and irregular objects that absorb the ambience and light in the room, they contain as many photographic attributes as they do painting. Kowalski uses found photographs as well as his own as reference material to create a mysterious and cinematic quality that often hints at science fiction as well as the in-between spaces such as that between sleep and wakefulness. Investigations of the inner world or inner landscapes, his works react to and counteract the outer world. He is represented by bo.lee gallery where he recently exhibited in group show Mindscapes in March as well as London Art Fair in January.

Living in a rural area on West Dorset’s Jurassic coast, Chantal Powell creates sculptural works about the unseen aspects of our psyche. A PhD in social psychology and an interest in Jungian theory inform her practice. Curious about how we are influenced by our personal and collective unconscious, Powell embraces metaphors, myth and symbolic language in her making. She works intuitively and intellectually in order to identify archetypes and discern key associations from her objects. Her use of symbolic processes and materials (such as sand casting, tin and gold), reflect her research into the alchemical process. Alchemy serves as a metaphorical representation for the process of transformation of the self that Jung called individuation – the goal being to re-establish connection between the conscious and unconscious. ​ Consciousness is transformed by the encounter with mystery and art is an instrument to facilitate this. Powell’s created objects can be read both as intimate portraits of the artist’s experience and more widely as poetic understandings of human psychological states. Powell was shortlisted for the Mark Tanner Sculpture Award in 2015 and was elected as a member of the Royal Society of Sculptors in 2013. She has exhibited at venues including the Guildhall Art Gallery in London, The Royal West Academy, Bristol, OCCCA, California, and at the 53rd and 54th Venice Biennales.